Nature has wired us to feel protective of babies, with their oversized, floppy heads. The big, round leaves of a fiddle leaf fig tree make it the house plant equivalent of a newborn. So it was probably inevitable that the fiddle leaf fig has become the latest “it” house plant–and that I fell in love with one (and that you will too, eventually) and wanted to bring it home. But can I keep it alive?

At the plant store, I was told to keep it in indirect light. And to let the soil in its pot dry out completely before watering it. And to be careful when I transplanted it–”don’t put it into a pot that feels too big or it will get freaked out,” the plant store owner advised–and to sing it lullabies at night if it had trouble falling asleep. In other words, this was a finicky plant that needs a lot of, um, special attention. Great.

As I drove home, I frowned at the 4-foot-tall native of West African lowland rain forests, sitting beside me in the passenger seat (should I have strapped it into a car seat?). It suddenly looked bigger than it had at the plant store. And yet somehow more delicate. Had I just spent $49 on a plant that was going to shrivel up and die in a week?

There is no way I can simulate a rain forest experience in a humidity-free Northern California stucco bungalow. But there was a glimmer of hope. Indirect light? That I can do. Outside my kitchen windows, the neighbors’ shrubs loom so high and thick that only watery green light seeps through the glass.

I pulled into the driveway and, hoping for the best, lugged the (heavier than I remembered) plant inside to sit next to the dishwasher. It looked pretty good there. Really filled the space. And maybe it would even thrive.

But the next morning, when I went into the kitchen, the fiddle leaf tree was missing. 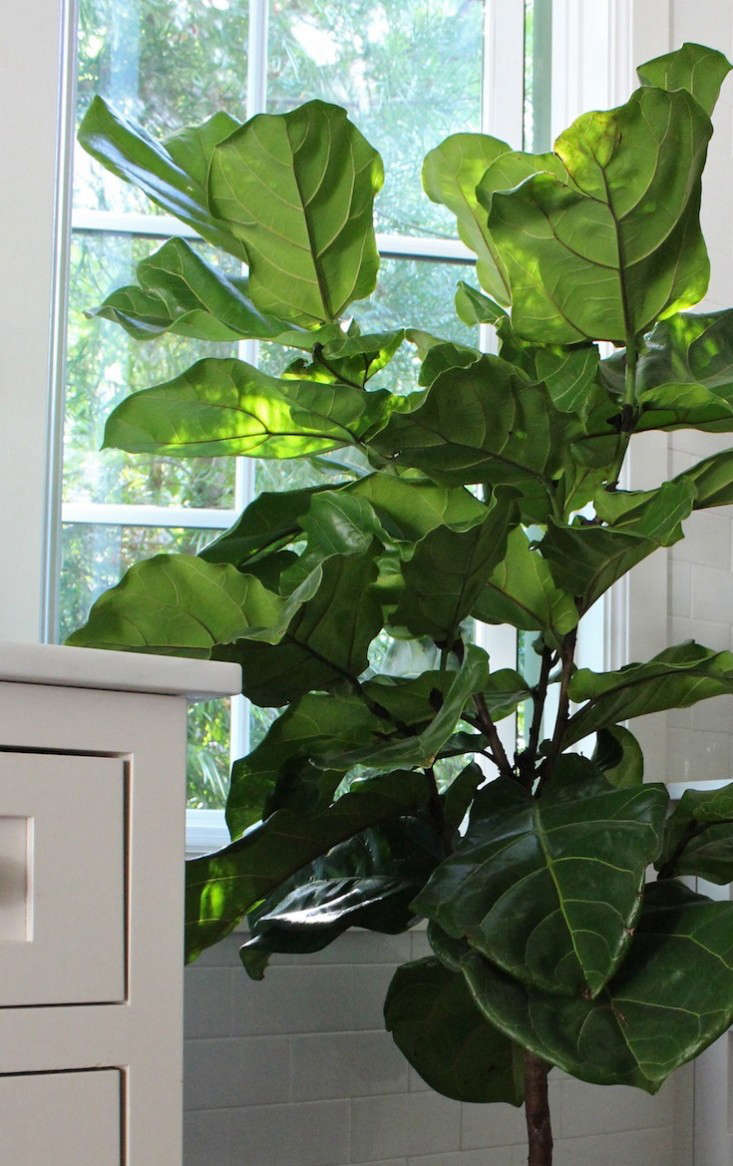 “Have you seen my fiddle leaf fig tree?” I asked my husband, who was standing where I had last seen the plant.

“Is that what that was?” my husband asked, not looking up from his iPhone. “It was in my spot, so I moved it.”

“It was blocking the espresso machine,” he said. “Plus, this is where I like to stand when I tweet.”

He tweets a lot.

“I don’t suppose you remember where you #movedit?” I asked. 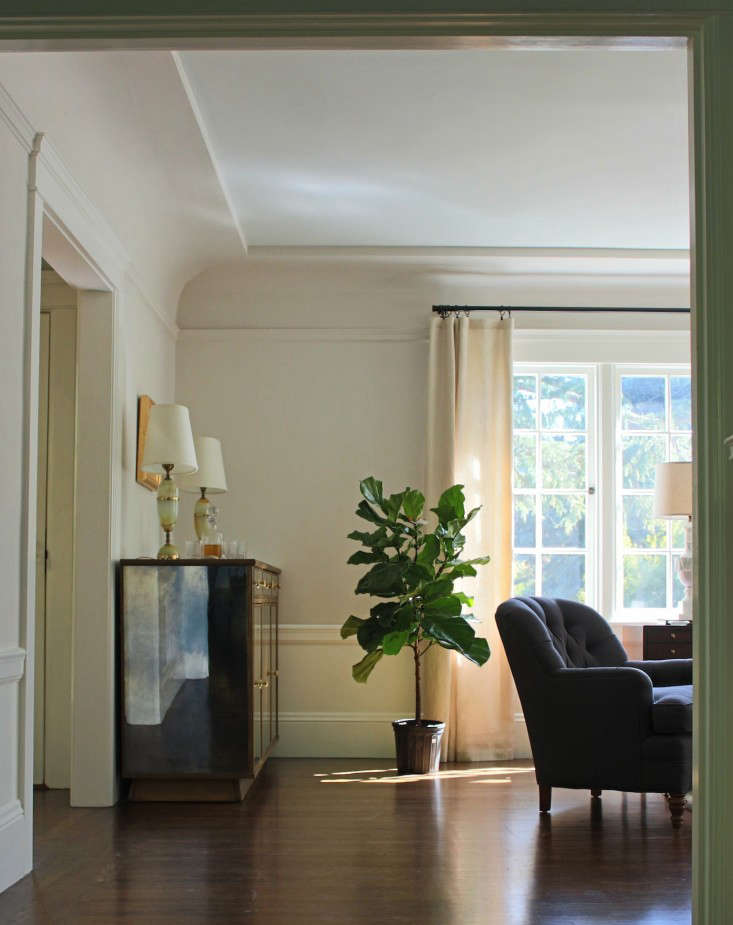 I found the fiddle leaf fig tree in the living room. It looked a little forlorn standing against a wall, but at least it was shielded from the window by a curtain. I figured it would be safe there until I had time to figure out a permanent solution.

“Isn’t it cute?” I asked my husband. “Doesn’t it look vulnerable and cuddly, like a baby if a baby had big round leaves instead of big round eyes?”

“I like puppies better than babies,” my husband said. 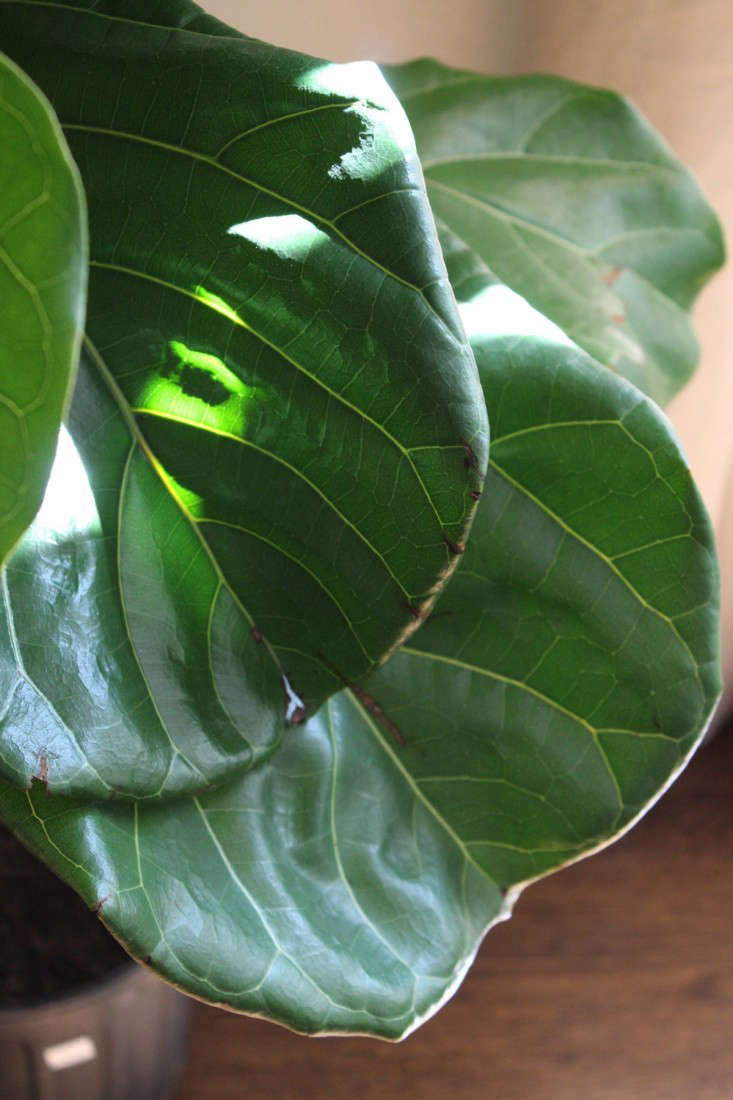 That afternoon at 4 pm, disaster struck. Sunlight started streaming in through the window (southern exposure).  I had to move the plant.

A fiddle leaf fig tree is not something you want to be carrying all over the house. It is unwieldy. Plus, with a skinny trunk and those floppy leaves, it looks like it could tip over at any minute if perfect balance is not maintained.

And really? The kitchen was the best place for it. If only my husband and the plant could share #thespot. 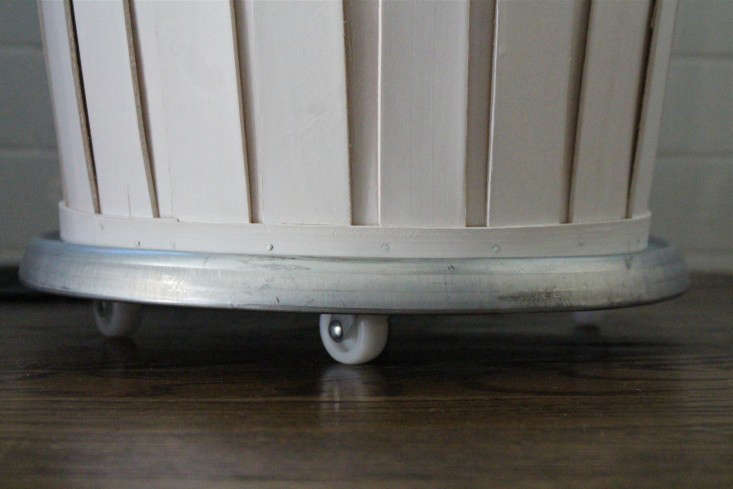 We were standing in the kitchen, my husband and my plant and I. I had gone to Ikea and purchased a rolling plant stand called the Socker Plant Stand. It cost $5.99, was made of galvanized metal, and had three rubber wheels. I demonstrated how they worked. 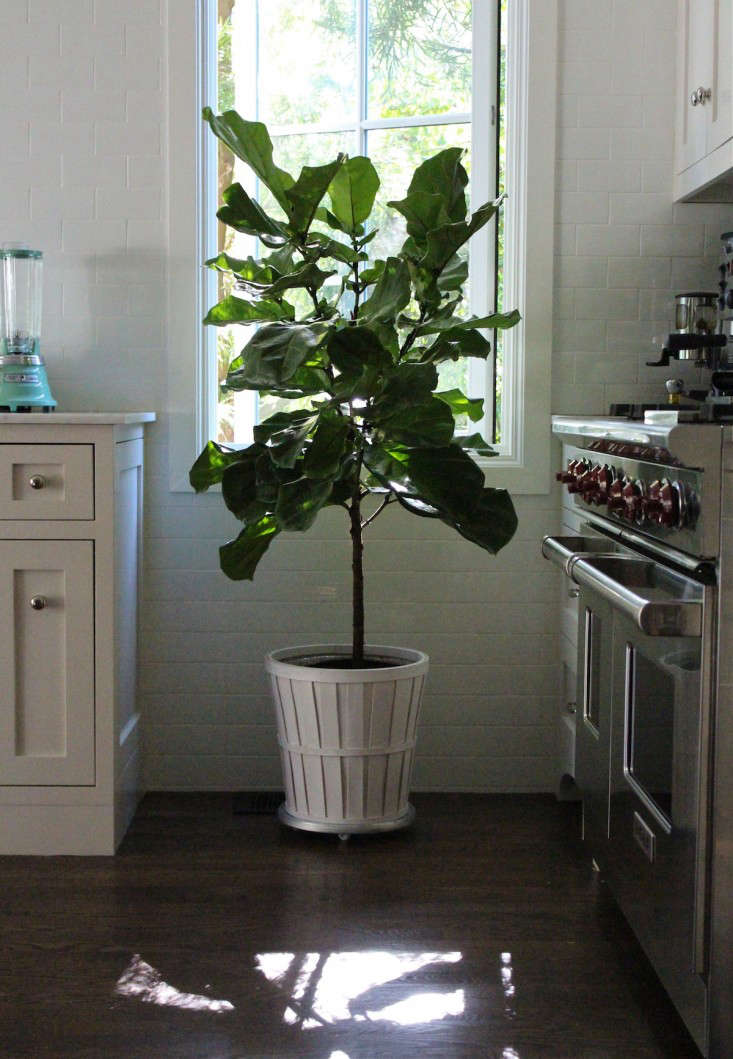 “See how easy it is to move the plant out of the way when you want to tweet or vacuum?” I asked. 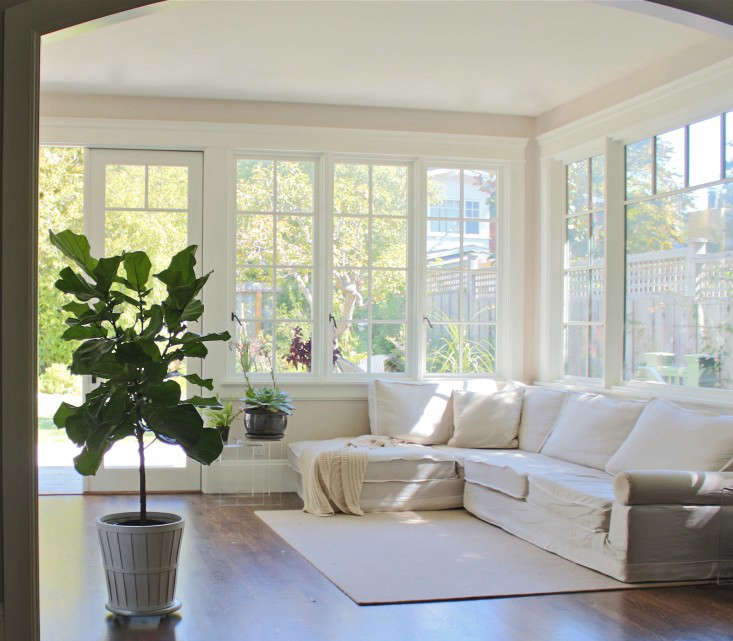 The next morning I found the fiddle leaf fig tree in the family room.

“It must have rolled itself over there,” he suggested. 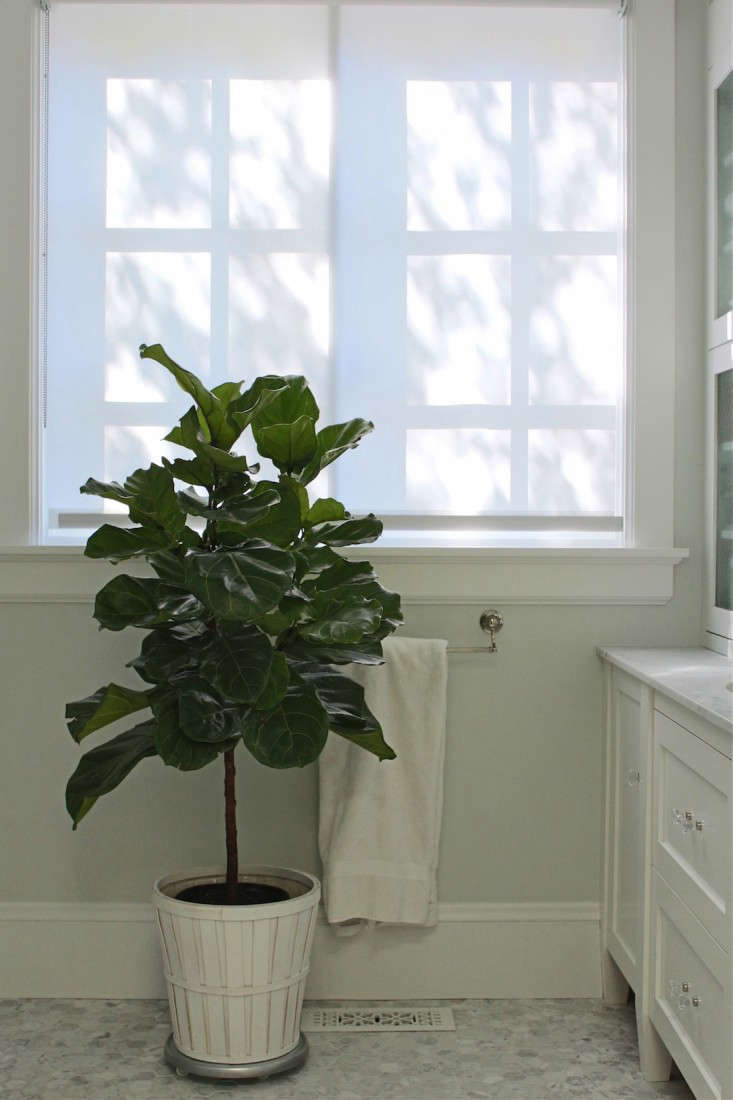 The next day, it was in the bathroom. It loomed large in there, hogging all the sink space.

“It better not use my toothbrush,” my husband said. 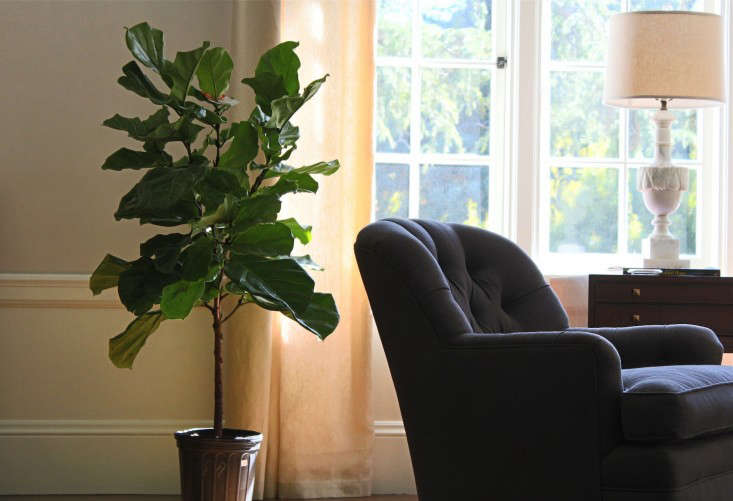 Today is the fifth day we have had the fiddle leaf fig tree. I cannot tell yet if it likes it here or thinks that living in our house in Northern California feels anything at all like living in a West African lowlands rain forest.

But I think my husband is getting attached to the plant. When I tracked it down this morning–it was back in the living room–I noticed someone had watered it.

It is only a matter of time before he starts telling it a story at bedtime.

Wondering whether a fiddle leaf fig tree is the right house plant for you? See our earlier post Consider the Fiddle Leaf Fig.

Enter to Win: A $1,500 Spring Garden Refresh from Rejuvenation

Looking to Add Some Life to Your Space? Plant Package Makes It Easy

Trending on Gardenista: The 21st-Century Garden