On February 1, we partnered with Farrow & Ball to share the Nine New Colors added to their 132-color collection. Throughout April and May, Remodelista editors applied the colors in our own homes. If you’ve been following along, you’ll have seen Danny’s bold office in Vardo, Alexa’s new furniture in Worsted and Salon Drab, Justine’s pantry in Inchyra Blue, and Julie’s cottage door in Yeabridge Green and bedrooms in Peignoir and Cromarty.

Today, features editor Meredith uses the final two of the nine colors—Shadow White and Drop Cloth—to redefine an underutilized spare bedroom in her San Francisco apartment. Meredith had shared her two-bedroom space with roommates for years, but after the last one moved out, the room became a no-man’s-land of reject furniture—a sometime office, sometime guest room—while Meredith debated whether to rent the room once more. Once she settled on keeping the whole thing for herself—it is rent-controlled, after all—Meredith got to work making the room feel like her own. 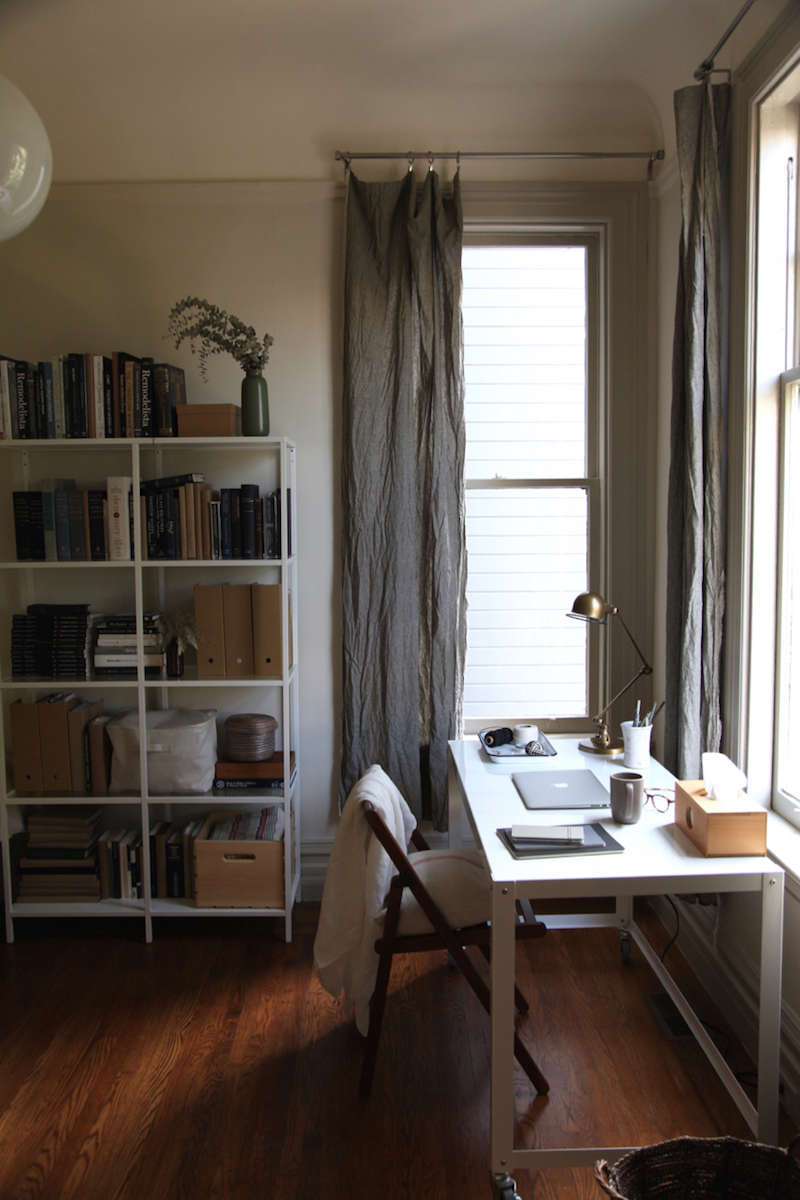 Above: Meredith transformed the room into her home office, with walls in Farrow & Ball’s Shadow White and trim in Drop Cloth. She bought a Go-Kart Rolling Desk from CB2 and paired it with an Ikea folding chair and bookshelf she already owned. 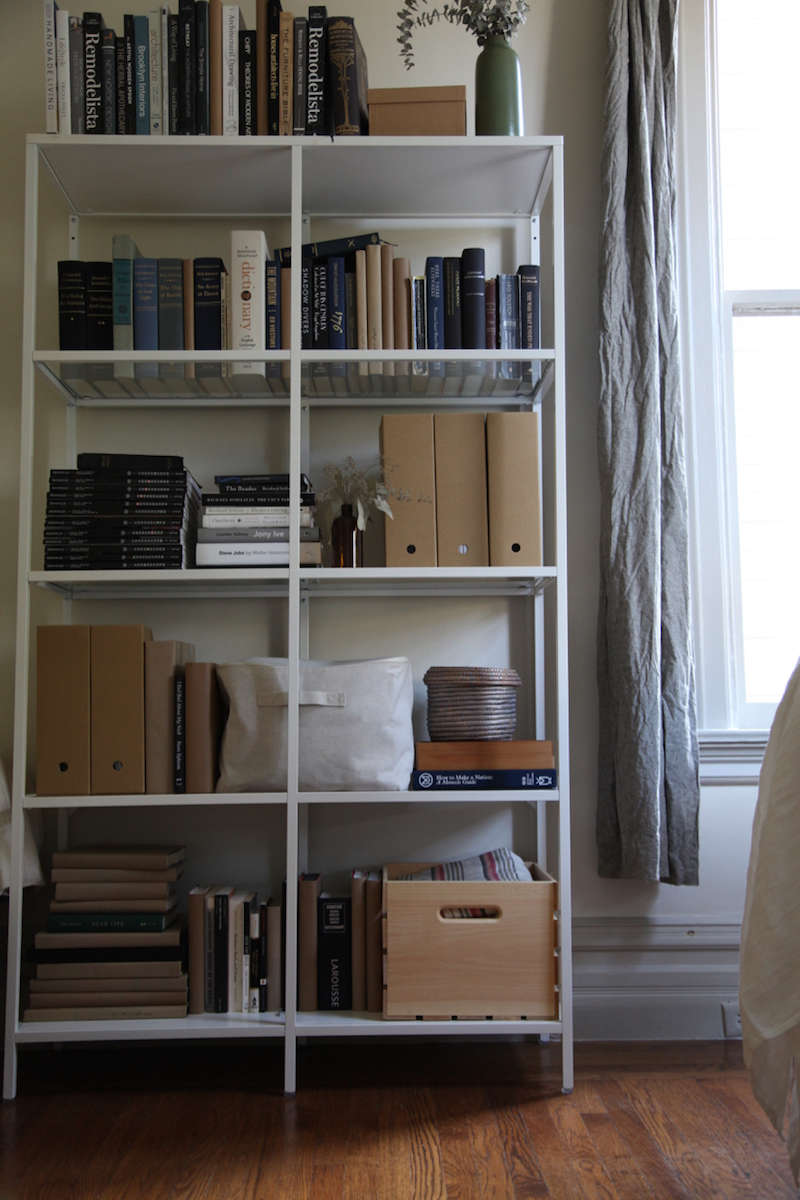 Above: Meredith chose the Shadow White paint in Modern Emulsion for a flat—but durable—finish, and the trim in Estate Eggshell for a slight sheen. She forewent priming and used two coats of color instead. Meredith sourced most of her storage accessories from Muji. 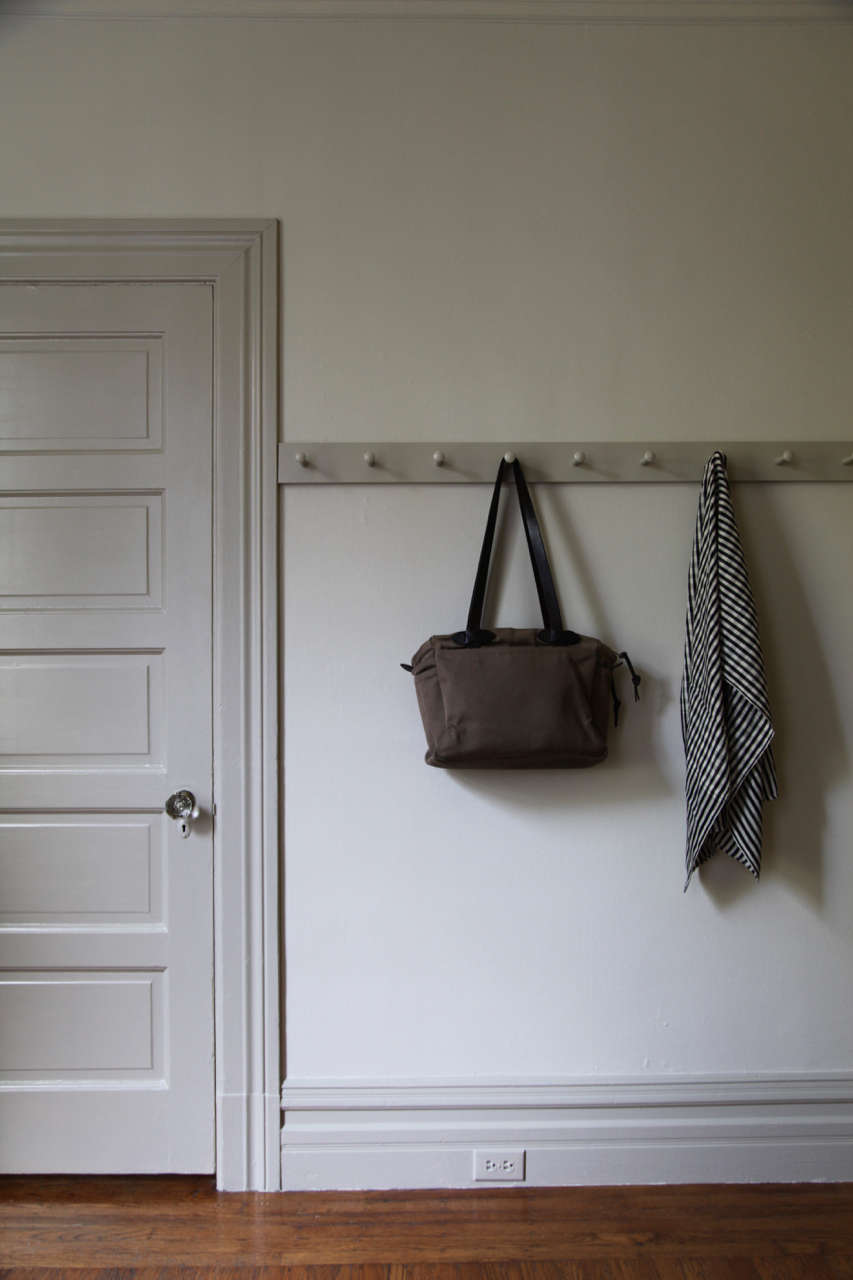 Above: On the opposite wall, Meredith installed a Shaker peg rail from Peg & Rail, custom-cut to fit the space. She ordered the rail unassembled so she could paint it before putting it together.

“This wall,” says Meredith, “is my new favorite part of the room. I love seeing the contrast between the wall and trim, and how the light affects this balance throughout the day.” 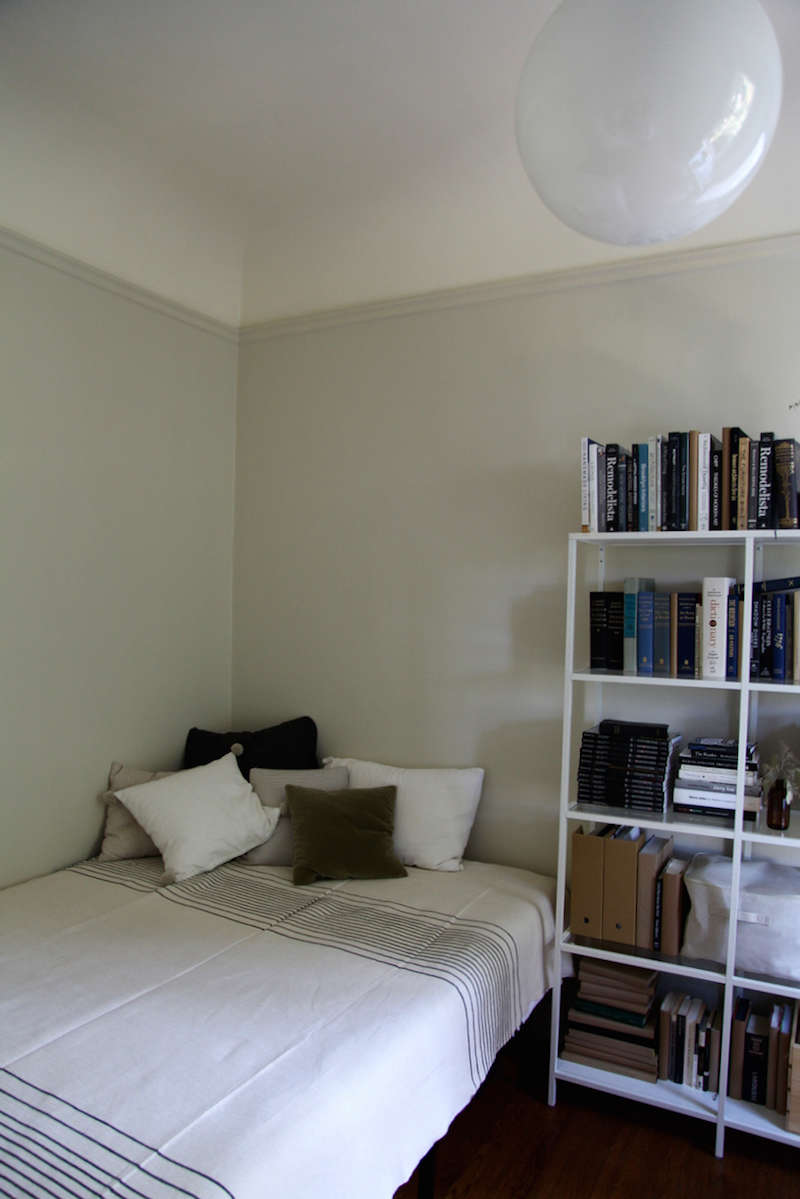 Above: Meredith debated eschewing a bed in the room altogether and making it solely an office instead. But the city’s rising cost of living reminded her that having a rentable room on hand would be a smart move. So she stacked the bed with throw pillows to use as a daybed for reading and work, and found the perfect place for a cotton blanket she bought in Morocco over Christmas. 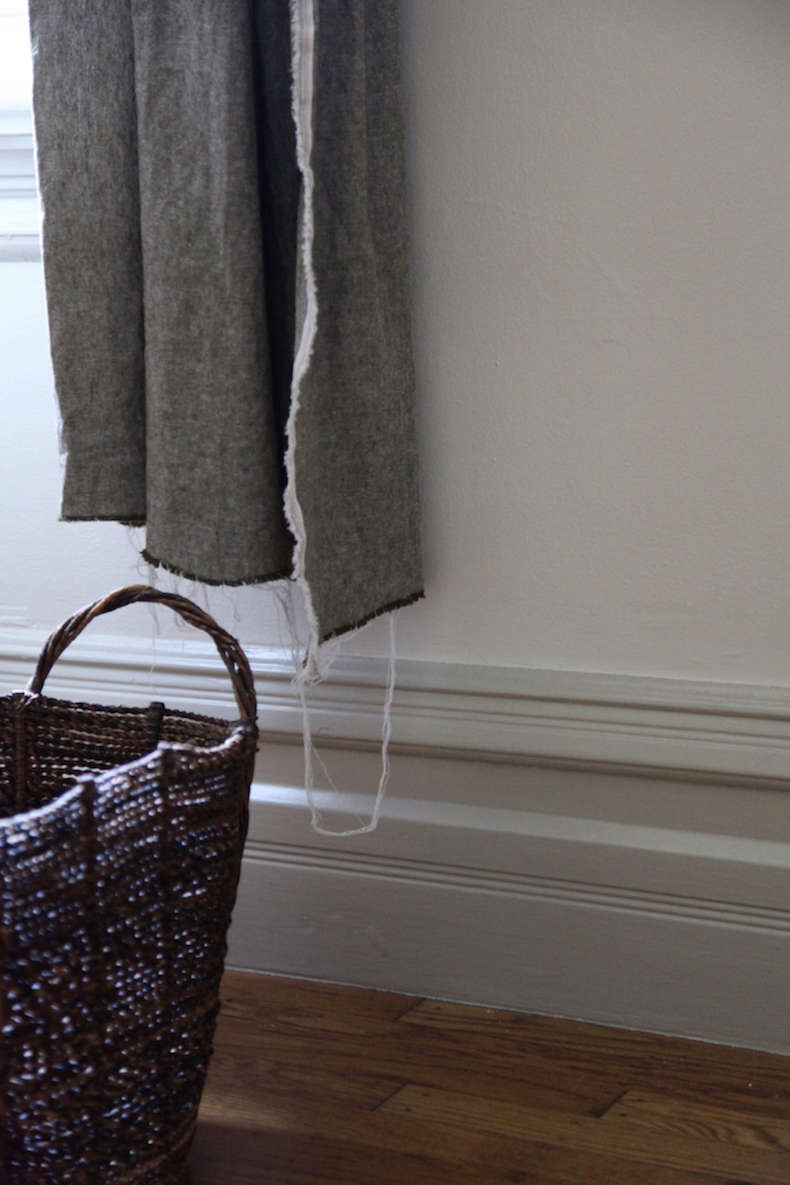 Above: Meredith made curtains out of cotton-linen fabric she sourced from Purl Soho in New York—a technique also used in the Remodelista Book. The fabric’s earthy gray color makes a perfect foil for the Drop Cloth and Shadow White. 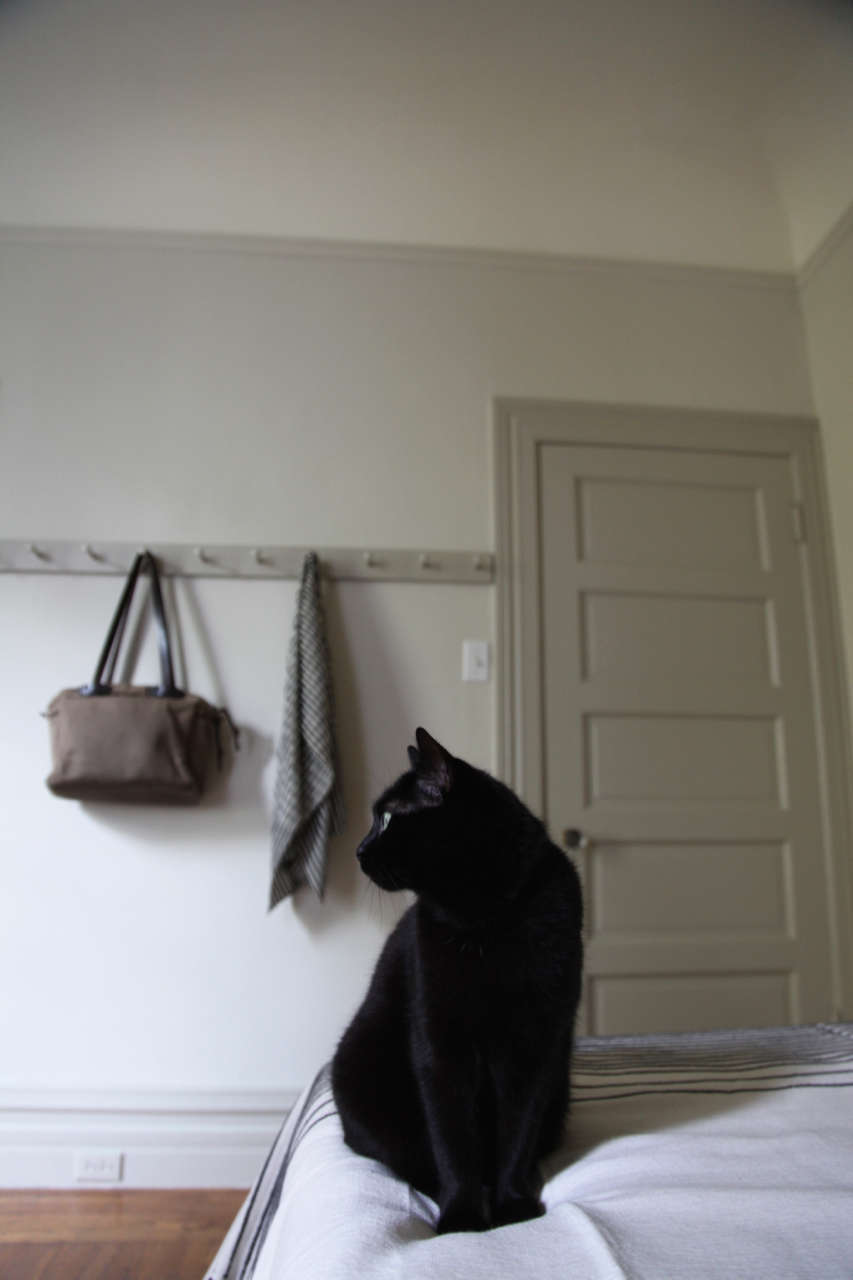 Above: Meredith’s cat, Reine, sits in stark contrast with the neutral-hued walls and trim. 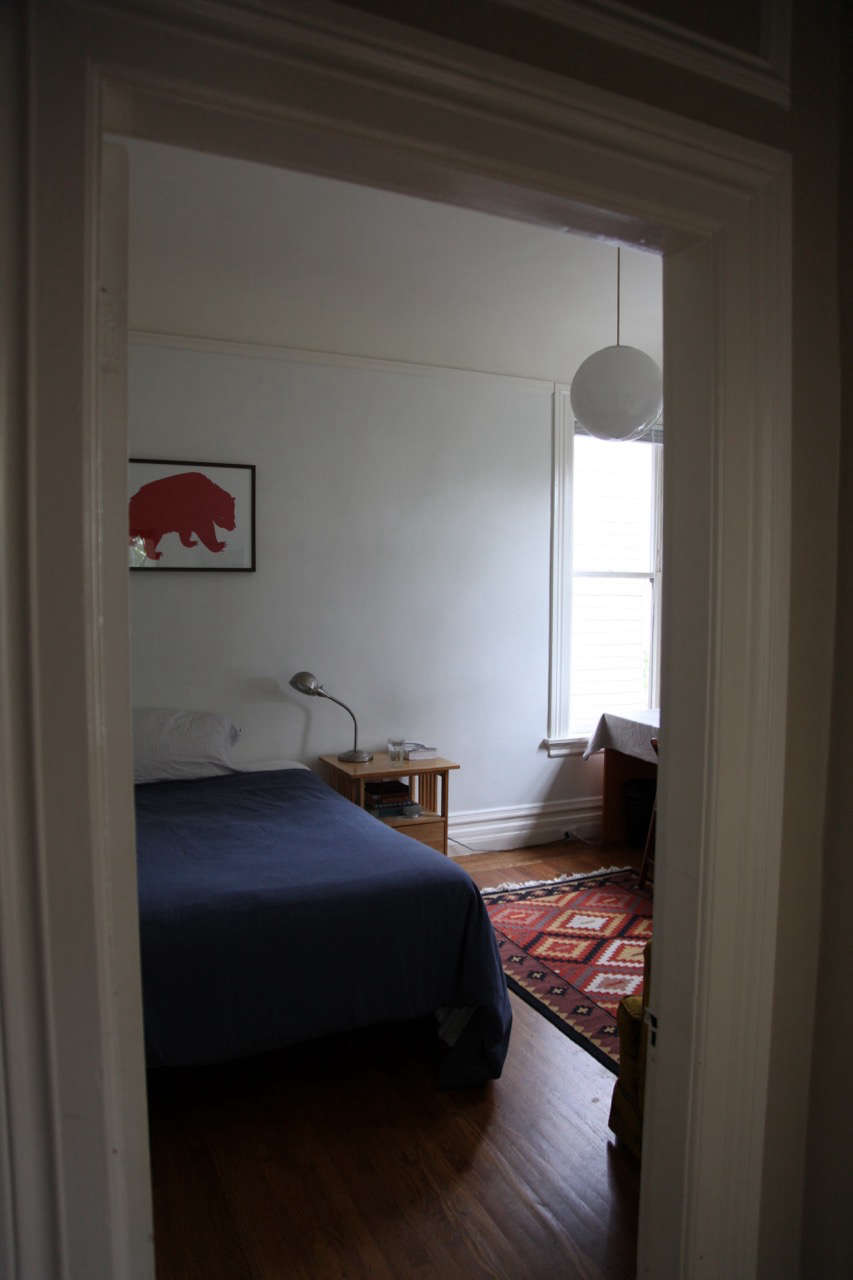 Above: Both bedrooms in Meredith’s apartment came with pale turquoise walls. She painted her own bedroom—in dark blue—the minute she moved in, and once her last roommate had gone she painted over the turquoise with a cheap white paint. Meredith got what she paid for, and the paint failed to fully cover the turquoise, as seen in the blue-tinted walls, above. The existing warm white ceiling did not flatter the newly blue-white walls.

Stay tuned: Later this week, you’ll have the chance to transform a room of your own using Farrow & Ball colors. In the meantime, visit our first post on Farrow & Ball’s Nine New Colors and visit Farrow & Ball on Facebook and Instagram.

Steal This Look: A Scandi Bedroom in a SoHo Hotel