“I’ve always wanted a garden since my dad and I planted one when I was nine,” says Remodelista sales manager Danny Della Lana. “When we relocated to Minneapolis from San Francisco last year, we bought a house with a huge backyard. Finally, my chance to have a garden.”

Danny wanted to build his own garden, but was in need of tools to do the job. We partnered with Fiskars—founded in Finland in 1649 and still headquartered in the country today—to supply Danny with tools from its recently expanded home improvement and gardening lines. (We’ve featured Fiskars before; the company’s most famous design—its Orange-Handled Scissors—are part of the Remodelista 100, a list of our all-time favorite everyday objects, published in the Remodelista Book.)

Fiskars tools in-hand, Danny set out to create his garden:

Photography by Josh Grubbs for Remodelista with styling by Lisa Evidon. 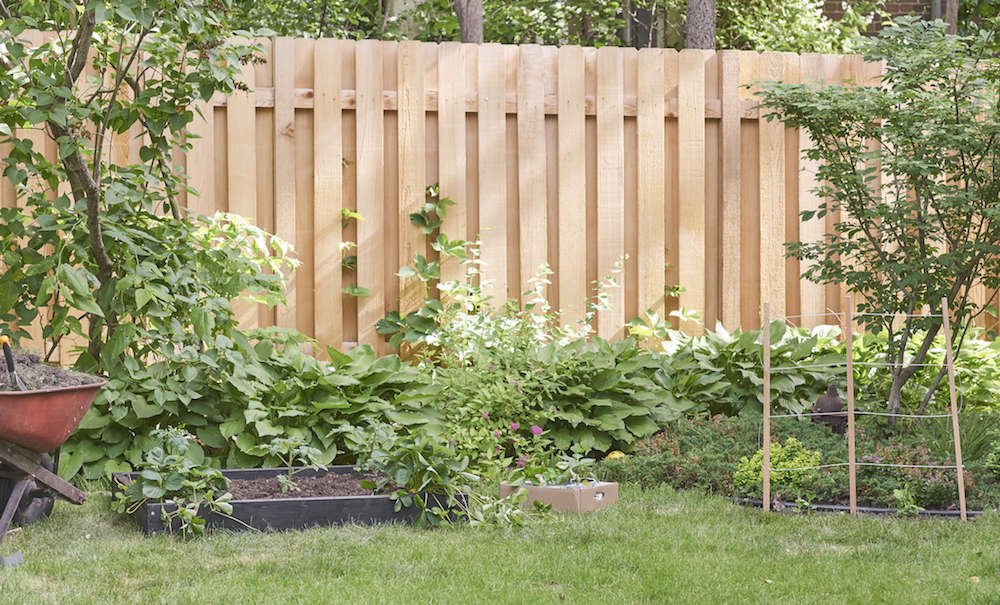 Above: Danny wanted two garden plots: one for tomatoes (“being Italian, I consider them a staple,” says Danny) and strawberries (“my son’s request”). The other plot is for sweet peas, supported by a small trellis. 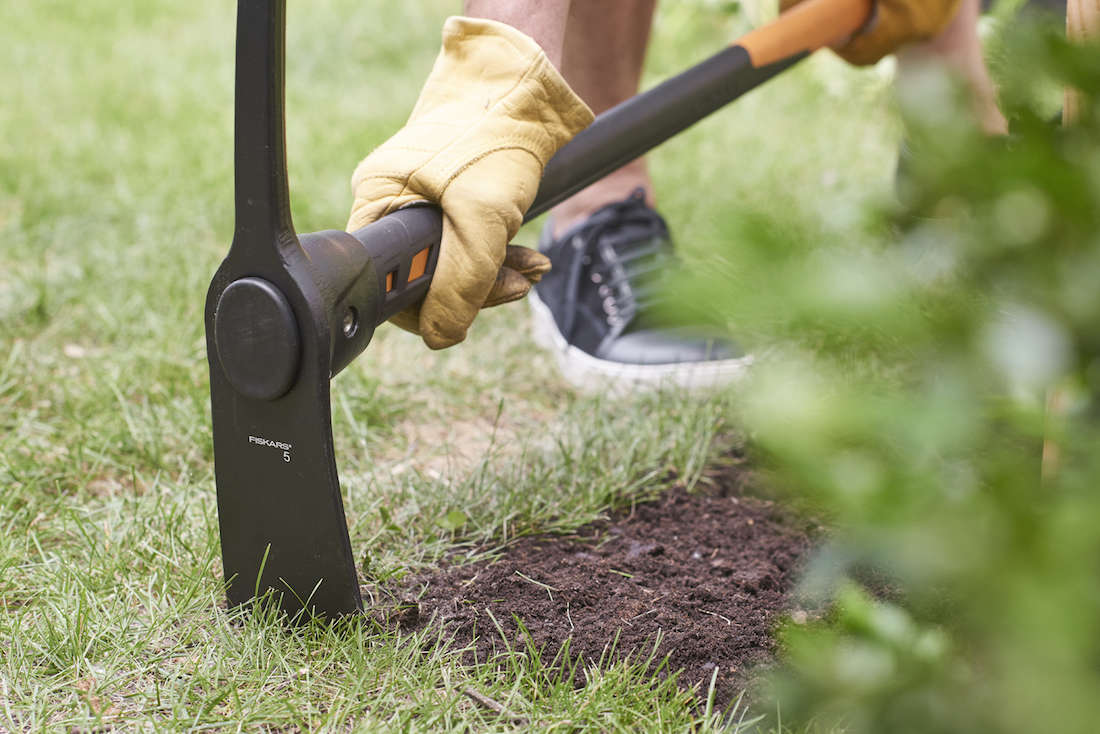 Above: Danny used the Fikars IsoCore 5 lb Pick to dig up turf to make space for the garden plots; $64.99. “The pick helped me chop up the grass and made it easy to remove,” he says. 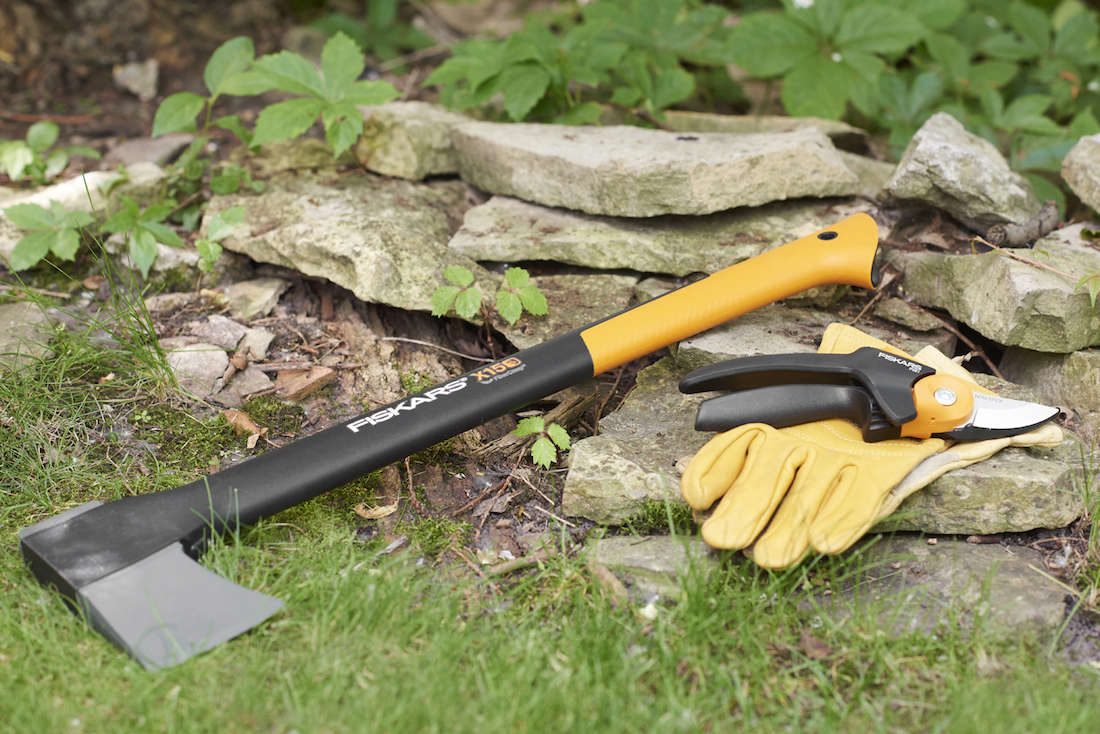 Above: Danny used the Fiskars X15 Chopping Axe to remove a small tree and break up its stubborn roots; its blade is made of hardened forged steel so it stays sharper longer, and its head is inseparable from the grip so the blade won’t break off over time; $44.99. Danny plans to use the Fiskars PowerGear2 Pruners to maintain his garden; $24.99. 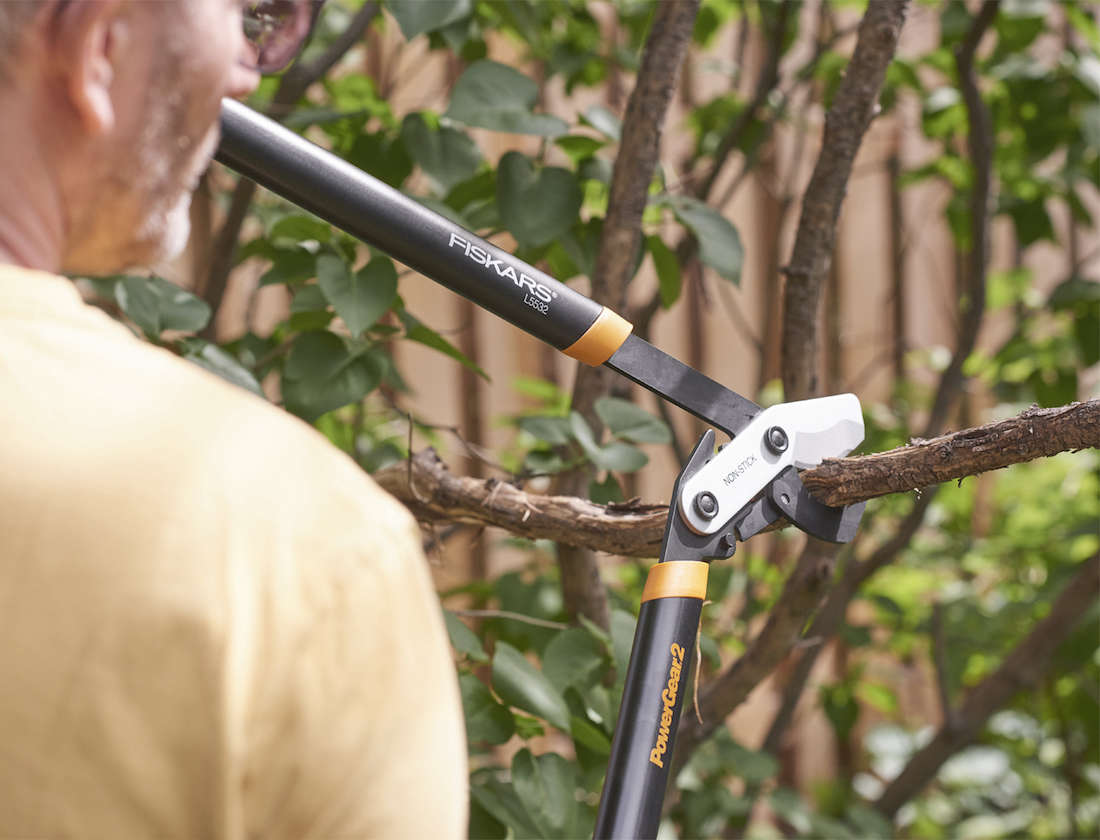 Above: “The spot I chose was a little shady, so my loppers came in handy to trim the tree above,” says Danny. He used the Fiskars PowerGear2 Loppers, with bypass blades to cut through branches up to 2 inches thick; $48.99. 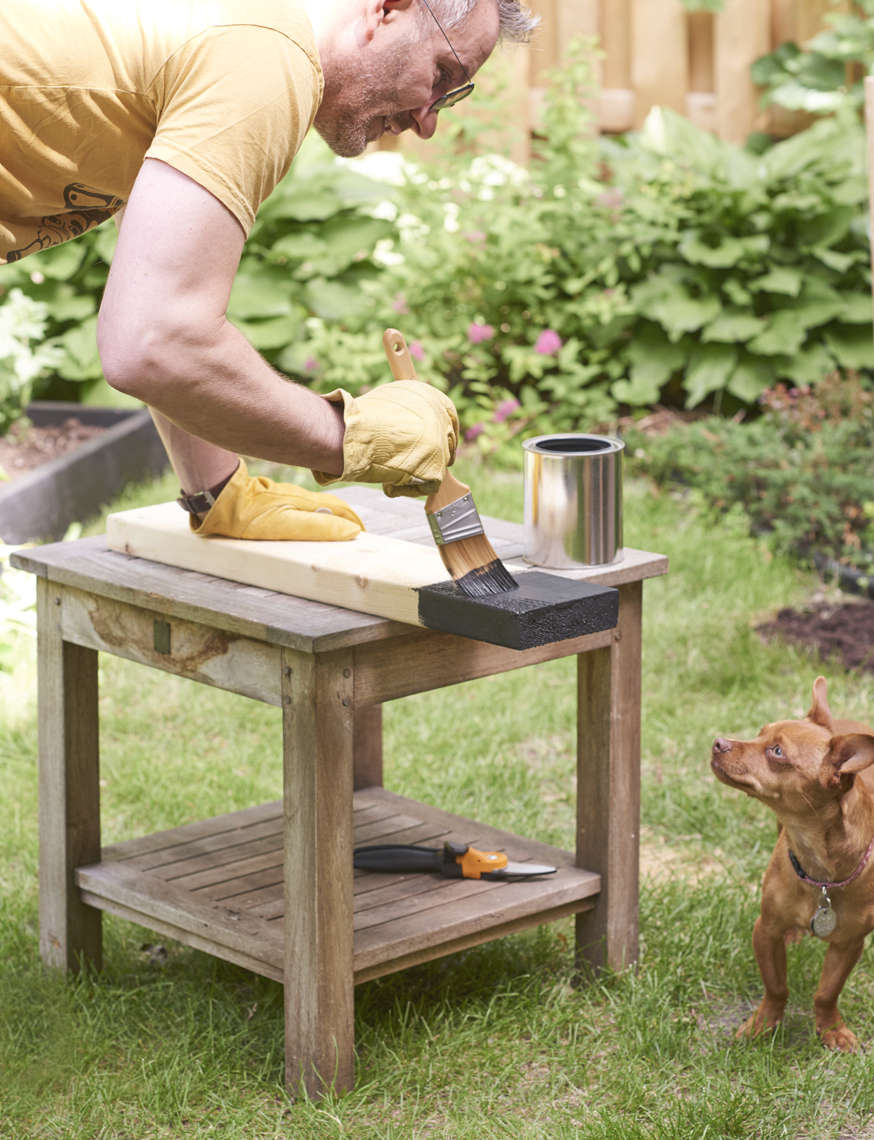 Above: Danny bought 2-by-6-inch lumber to build the raised bed, and chose black paint (the color absorbs the sun’s heat to warm up roots earlier in the season in Minnesota’s cold climate). 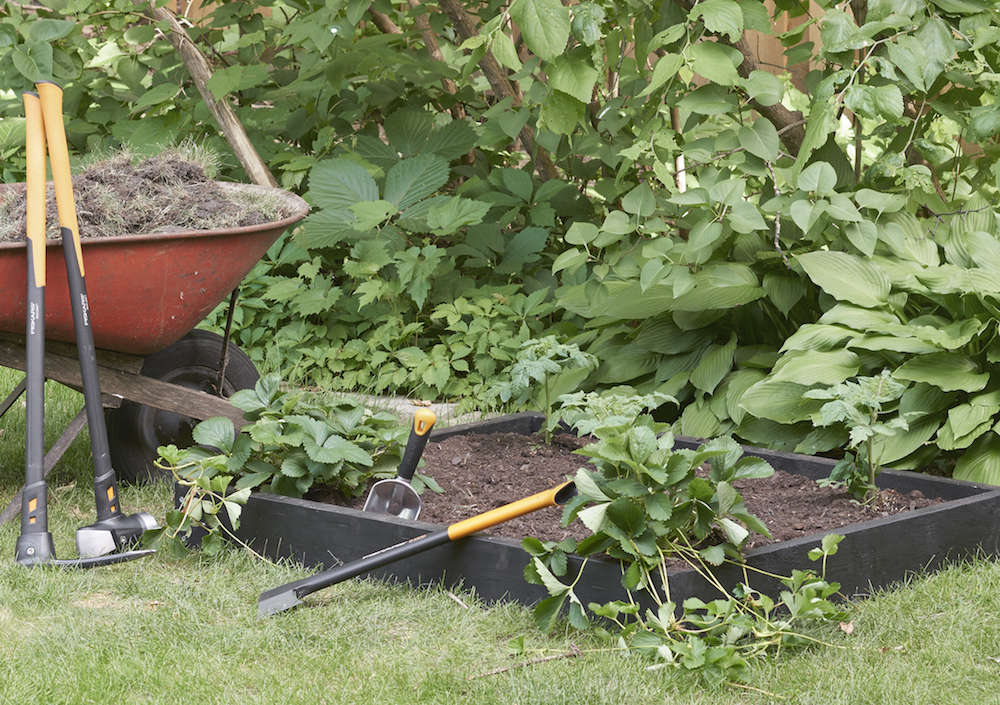 Above: “Once the bed was built, I filled it with organic topsoil,” Danny says. He used the Fiskars Steel D-Handle Digging Shovel to loosen the top layer of soil in his garden and to add a top layer of rich black compost; $31.99. 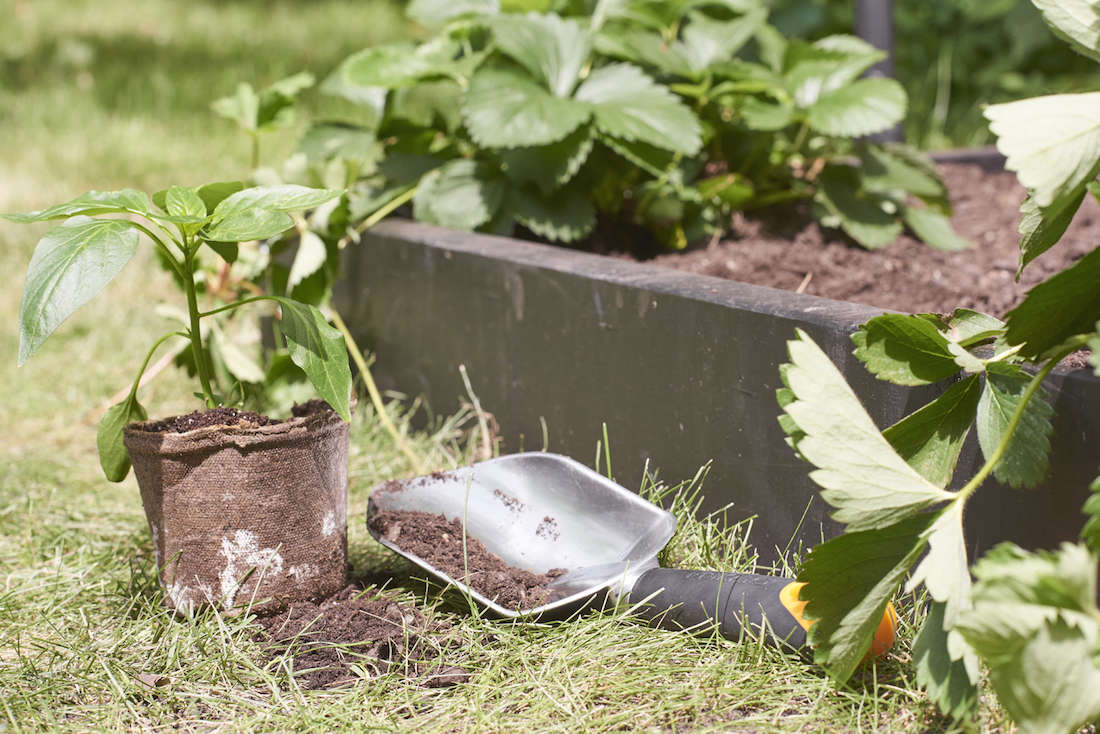 Above: “I next planted the tomatoes and strawberries, making sure there was enough space between the two to thrive,” he says. The Fiskars Big Grip Trowel came in handy during planting; $8.99. 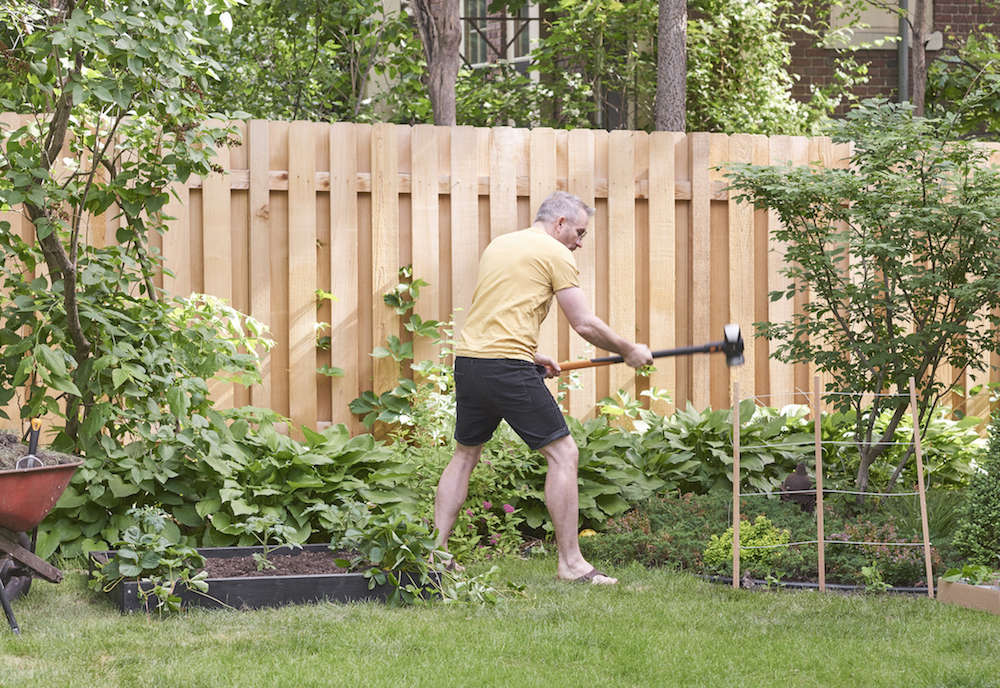 Above: For the sweet pea patch, Danny used the Fiskars IsoCore 10 lb Sledge Hammer to drive in stakes around the perimeter; $69.99. He then braided wire through predrilled holes so the peas would have a frame to grow on. 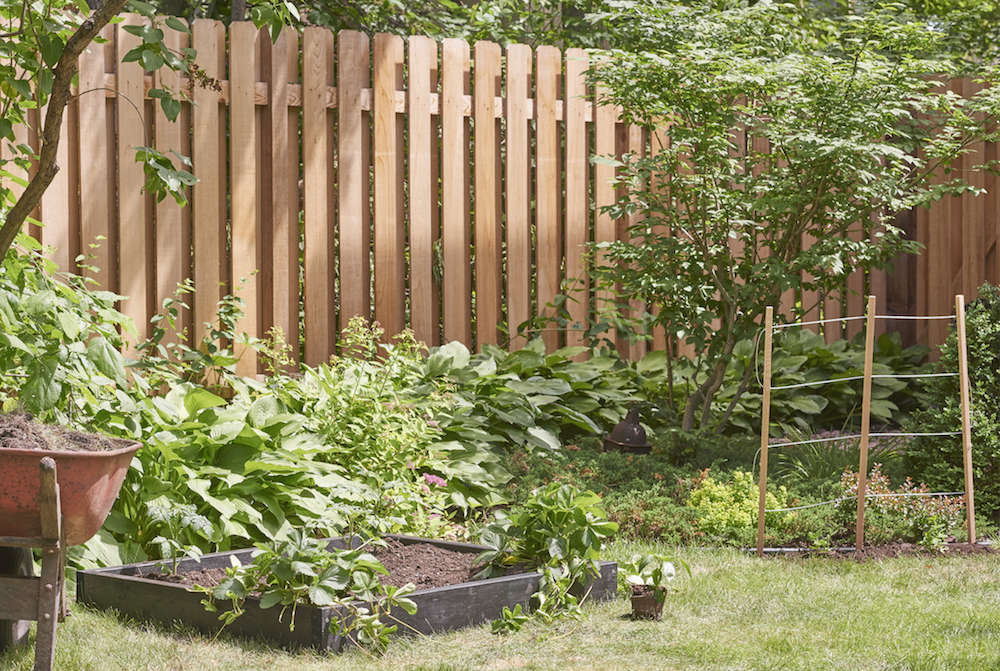 Above: “My sons are in charge of the plots,” says Danny. “I promised them a nickel for every tomato they grow. They’re hoping for a bumper crop, while I’m just hoping to make some spaghetti sauce in late summer.”