Former BBC-producer-turned-kitchen-entrepreneur Philip Dundas knows the value of sharing food. In his father’s last years, Dundas could often be found aiding and abetting his father’s late-life passion for cooking; during many meals, the pair, who had been estranged, forged a new relationship. Encouraged by his father, Dundas turned his blog, PipsDish, into a book, Cooking Without Recipes, and began hosting supper clubs in his East London apartment. More recently, he’s graduated to pop-up restaurants that recreate convivial kitchen experiences across London. PipsDish Covent Garden is Dundas’s latest semi-permanent venture. Join us for a tour (including the shepherd’s hut in the garden out back). 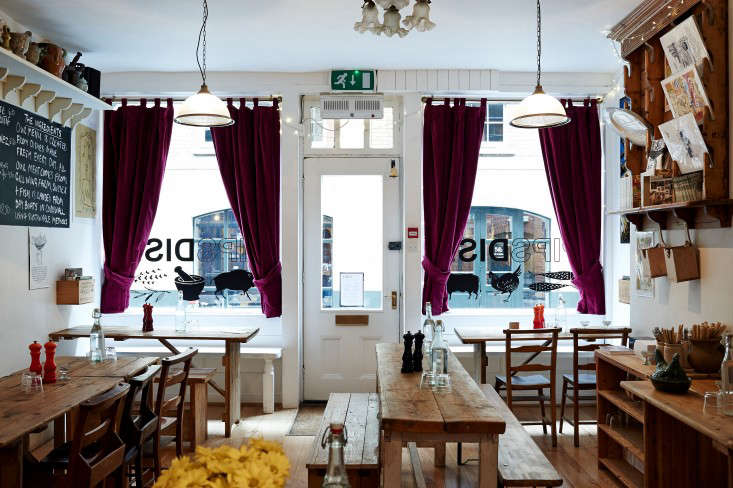 Above: PipsDish Covent Garden is homey and casual. The furniture came from Dundas’s former pop-up at the Garage in Islington; the long tables were originally used for wallpaper pasting. 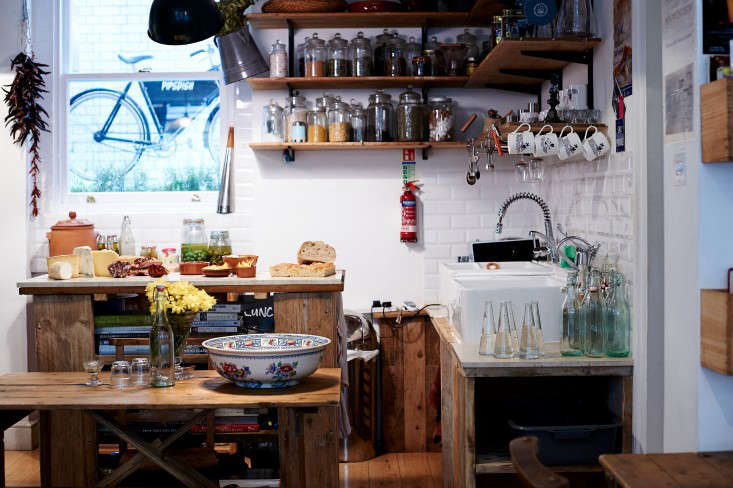 Above: In his previous eating establishments, the cooking always took place in the same room as the dining. Because of space constraints, the working kitchen of the Covent Garden premises is downstairs. At the back of the dining room, however, Dundas set up a small servery, a service counter for preparing drinks and assembling cheese boards and canapes. The one structural change he made to the space was to install a window to let in natural daylight. 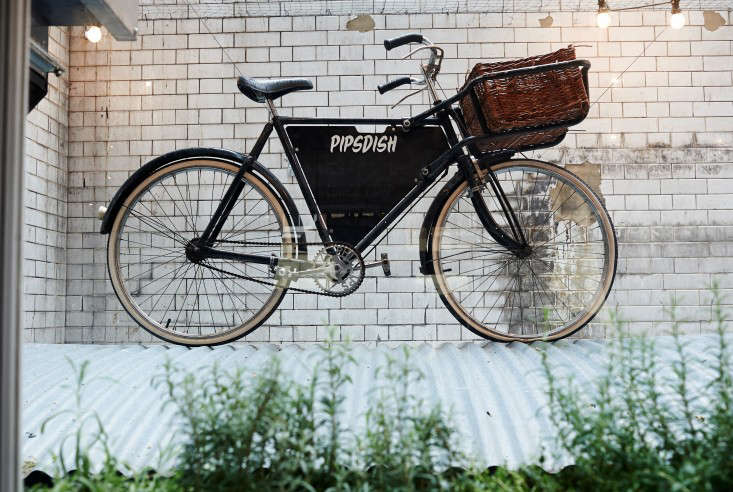 Above: The PipsDish bicycle follows Dundas from pop-up to pop-up. Its current location is in the back of the restaurant atop the metal roof of the hut. 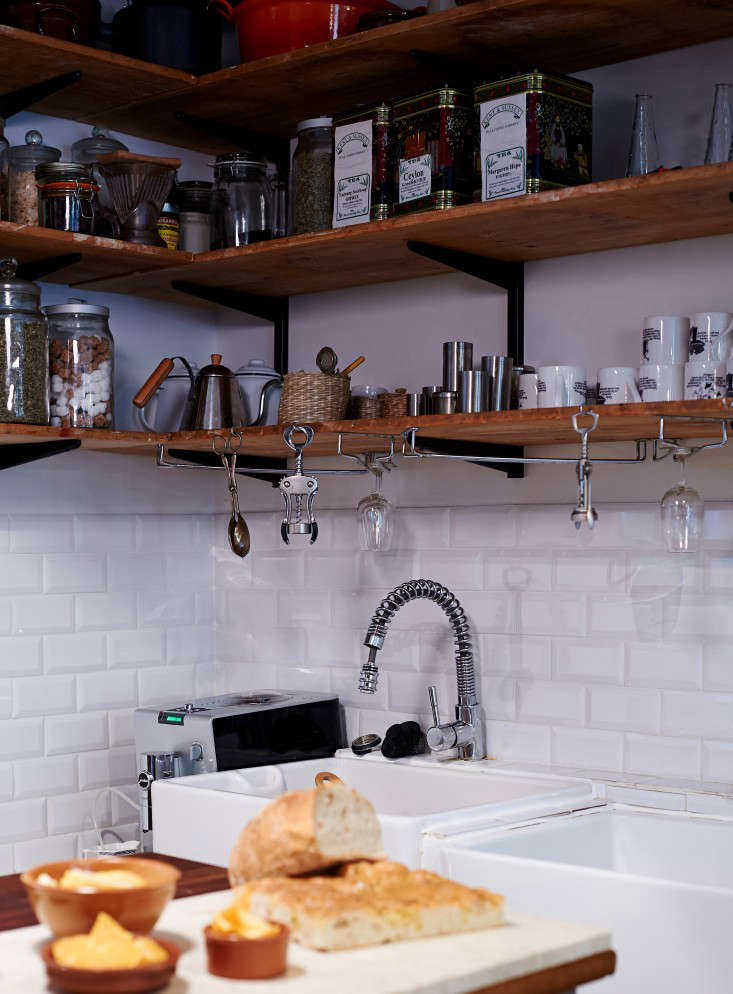 Above: Open shelves and under-mounted glass drying racks mean everything is close at hand in this practical working space. “I am forever recreating the kitchen I really want,” says Dundas. 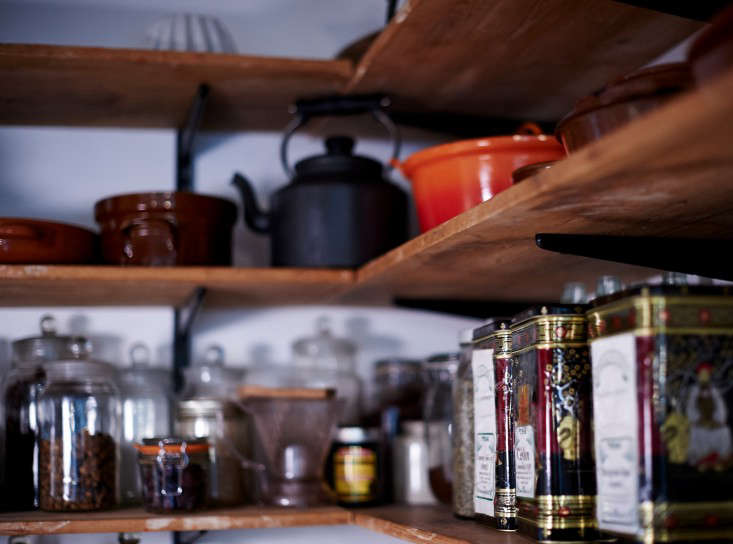 Above: The shelves in the servery are made from boards formerly used to mature cheese. 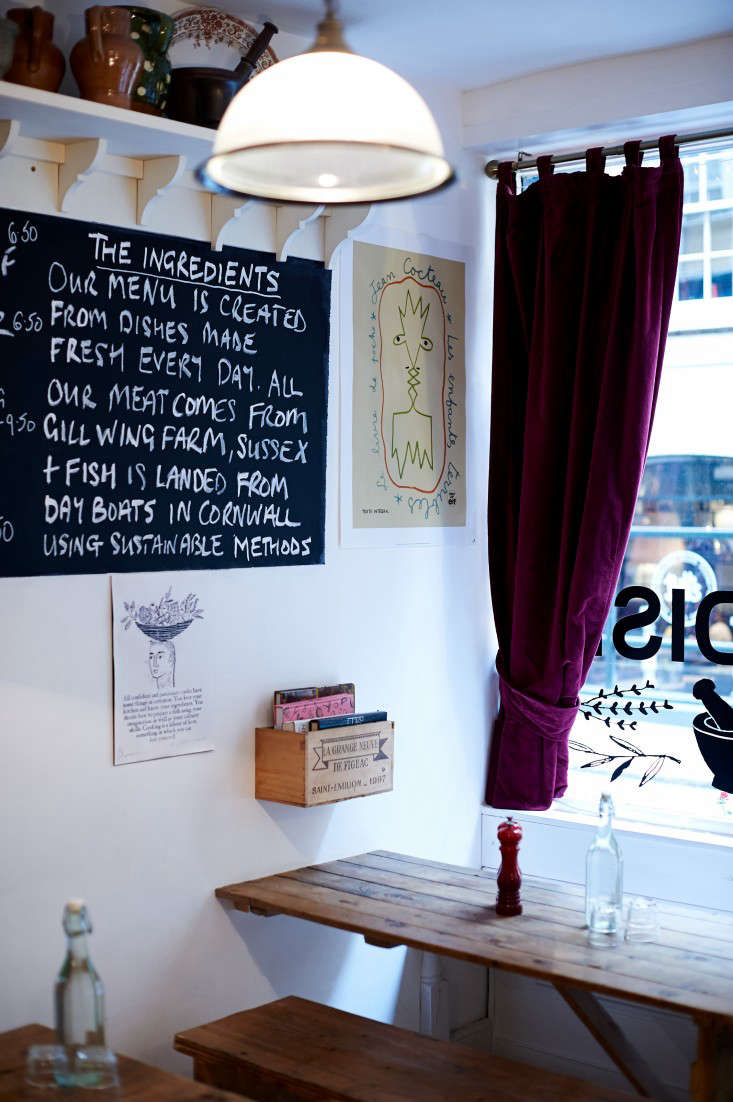 Above: Plum velvet curtains and a painted chalkboard. The London Evening Standard food critic described the cooking as “sweetly wholesome.” 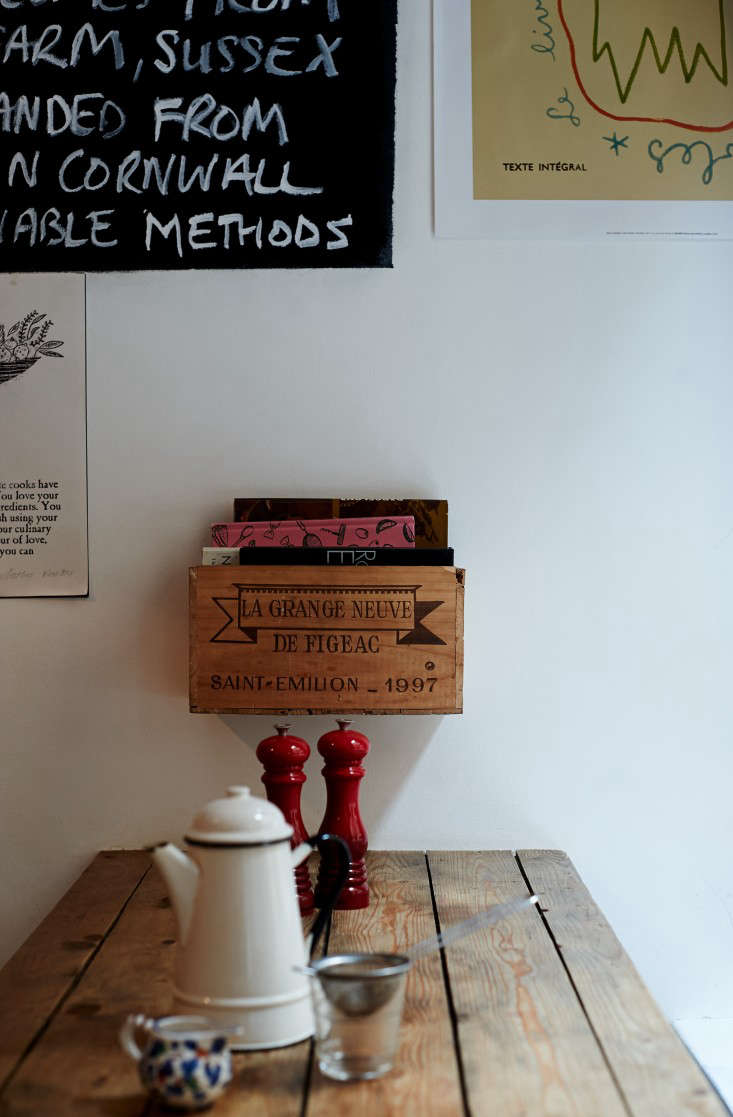 Above: Old wine boxes cut down to size provide easy storage for tableside cookbooks, inspiration for guests and for Dundas himself. 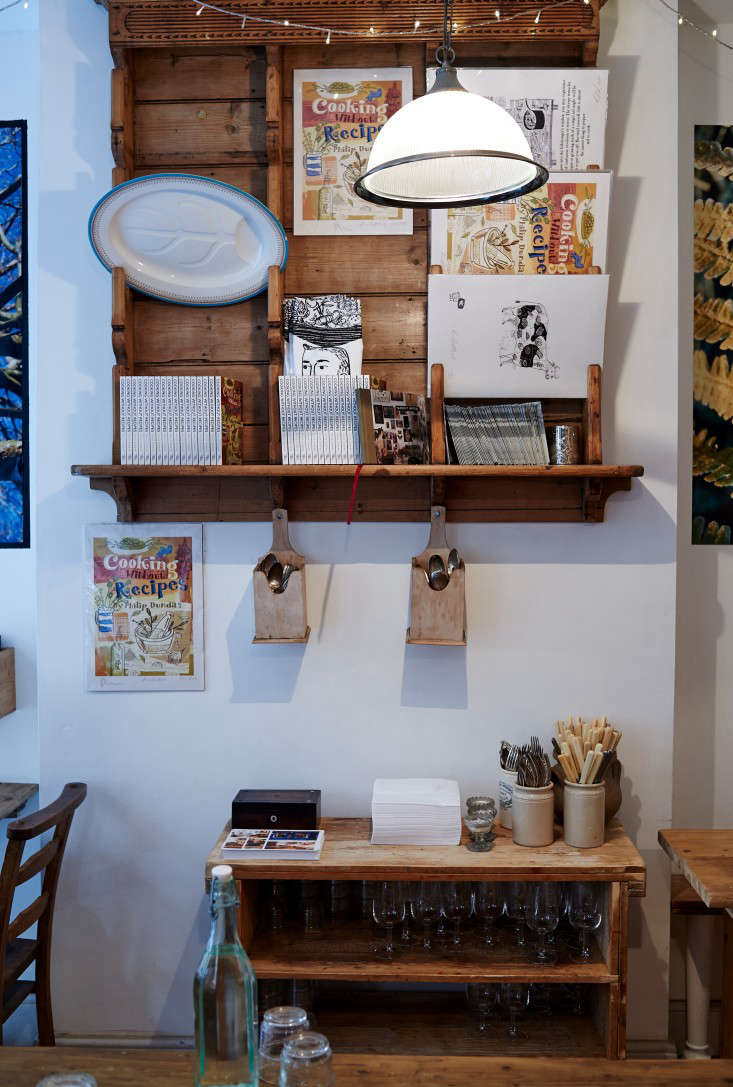 Above: Purchased at a vintage sale, the wooden wall rack is most likely French (and made for storing pewter meat trenchers). Dundas uses it to display copies of Cooking Without Recipes and prints that are for sale. 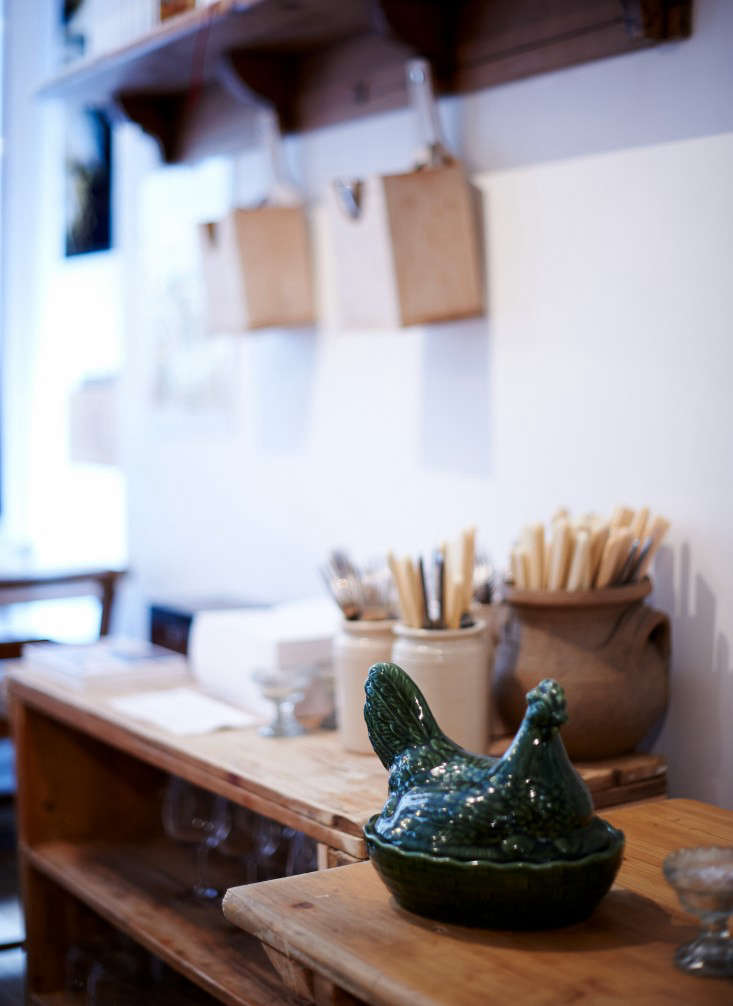 Above: “Everything in this space is hugely personal,” says Dundas. “It’s all things I’ve collected over the years.” The ceramic hen was the first present he gave his mother, when he was about eight years old. 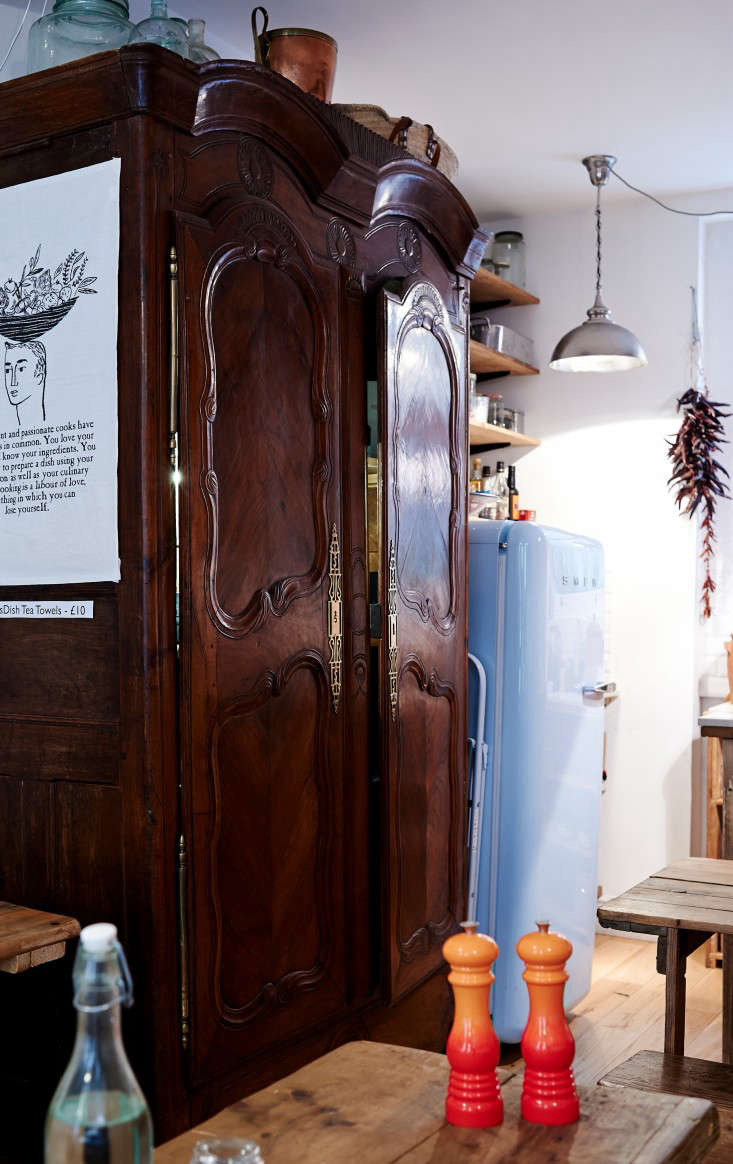 Above: An antique French armoire houses the control station: a computer for reservations, and the credit card machine. “The armoire was my grandmother’s version of flat pack furniture,” Dundas says. “She disassembled and reassembled it many times as she moved around India.” 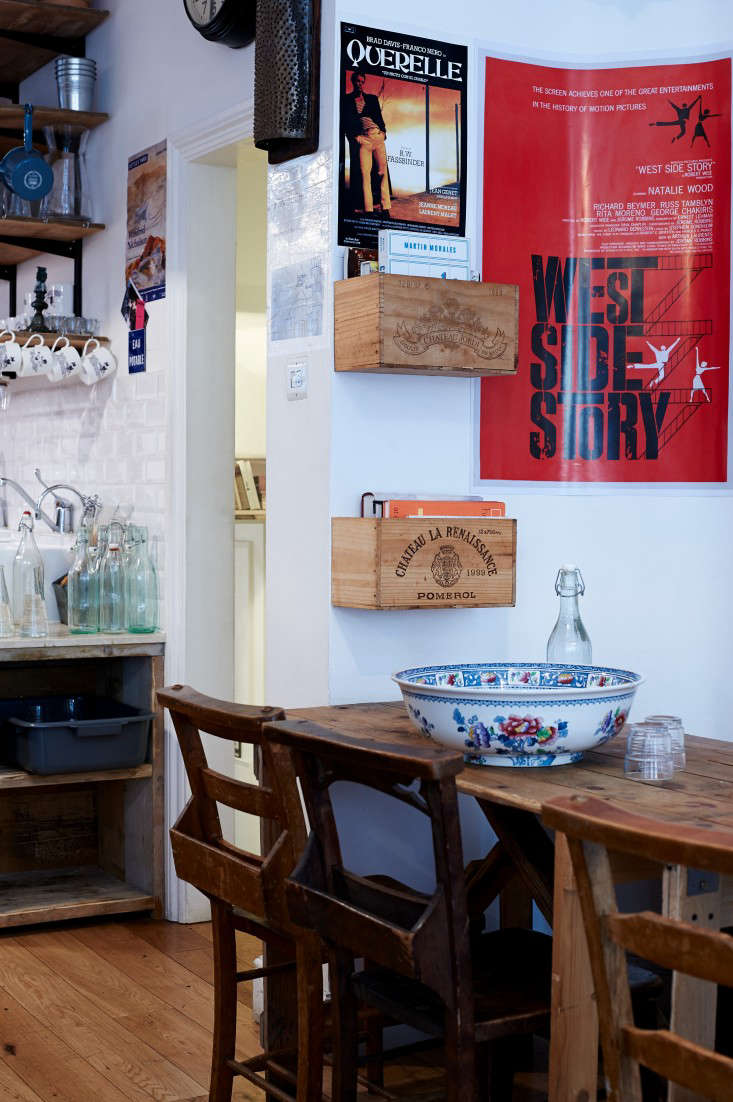 Above: The door leads to the stair to the hut and the loo, and the working kitchen in the basement. “Even the posters on the wall have personal meaning,” Dundas says. “Querelle by Fassbinder was my first gay film, and Natalie Wood in West Side Story, who couldn’t fall for her?” 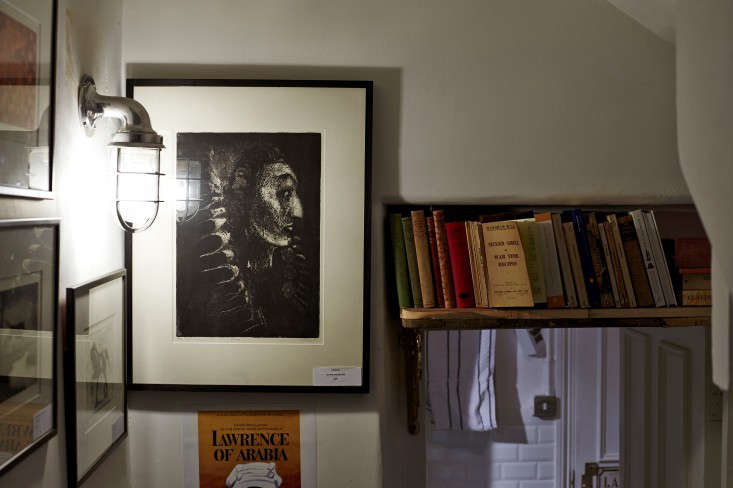 Above: The stairwell is lined with framed prints and etchings. 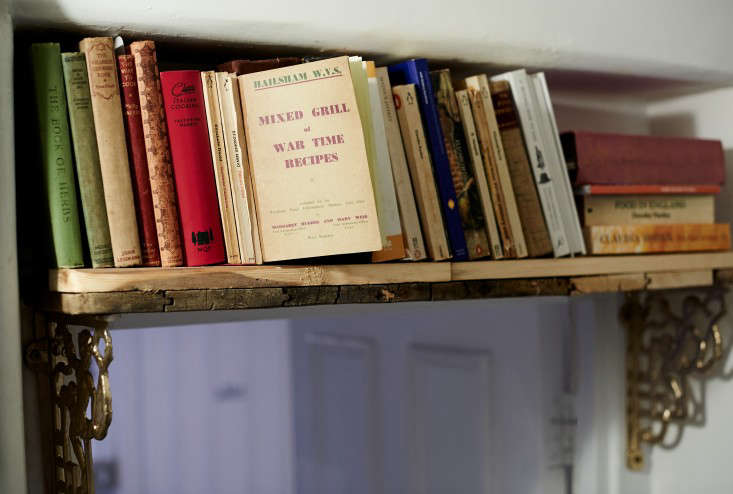 Above: In constant need of storage for all of his cookbooks, Dundas finds space above the door. 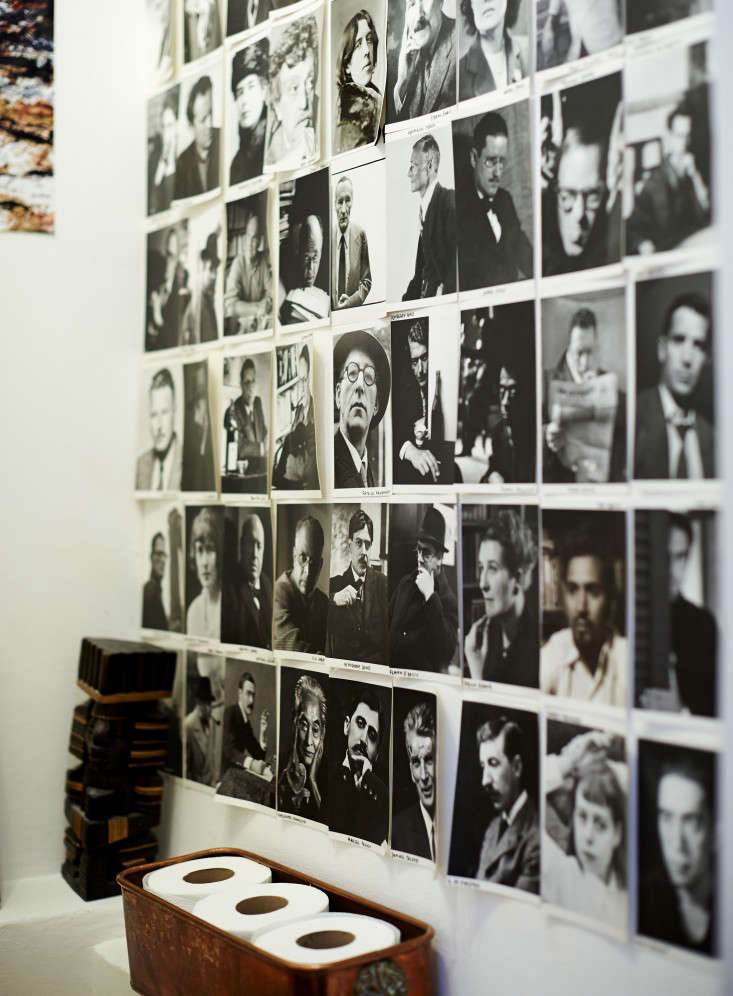 Above: The bathroom is wallpapered with Penguin Classic postcards of great authors of the 20th century. Toilet paper is tidily stowed in a copper planter. 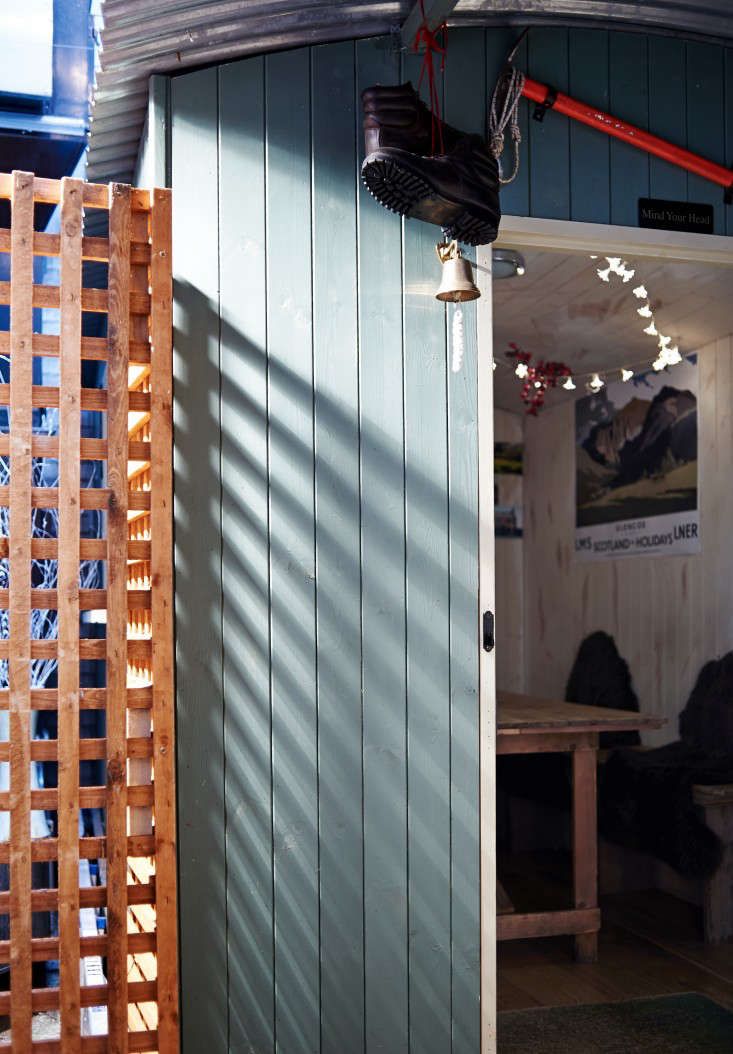 Above: In the small, unused garden area in back, Dundas installed a Mini Hut from Dorset Sheperd’s Huts, which arrived as a ready-to-assemble kit–and gained the restaurant an extra table. 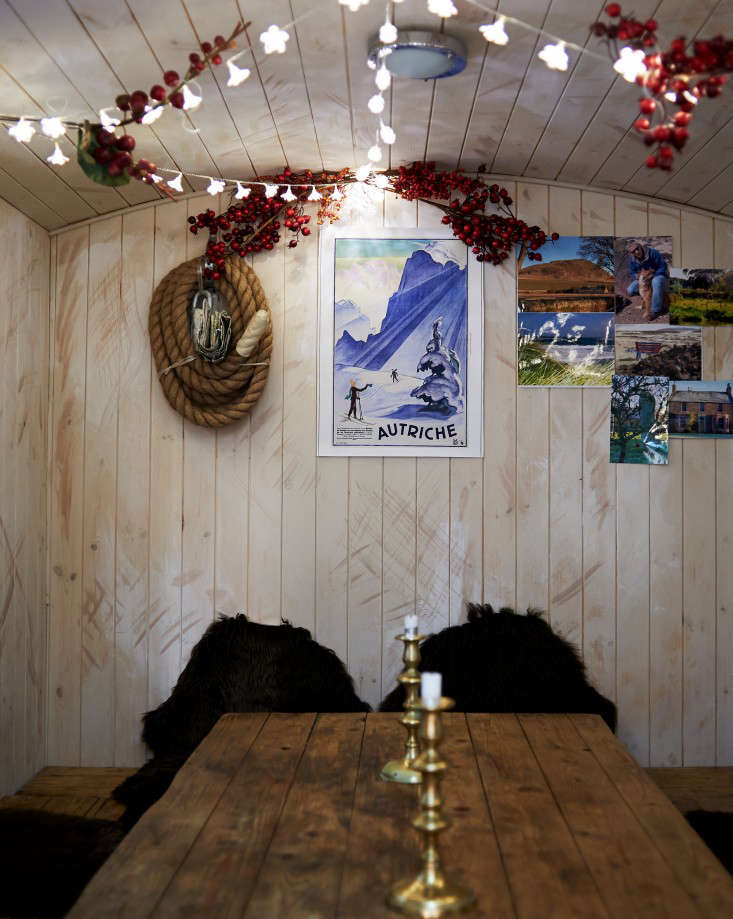 Above: An avid mountaineer, Dundas styled the room as an alpine hut with posters, travel photos, and sheepskins. 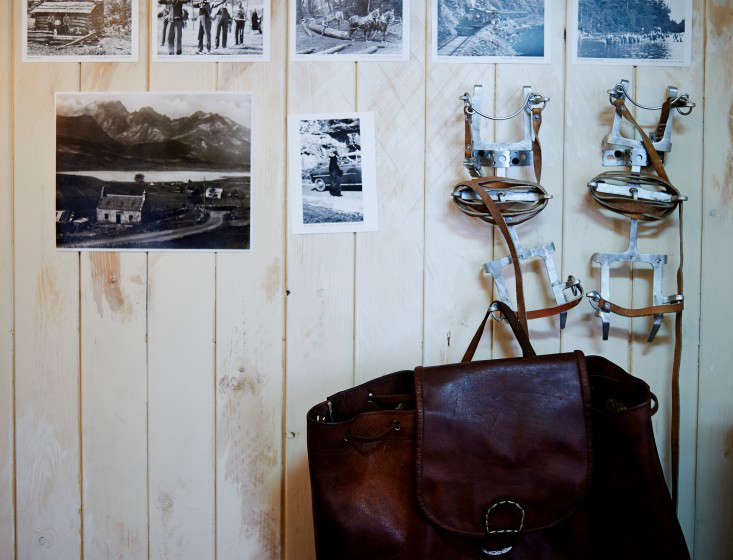 Above: The hut offers a private dining experience for six to eight. 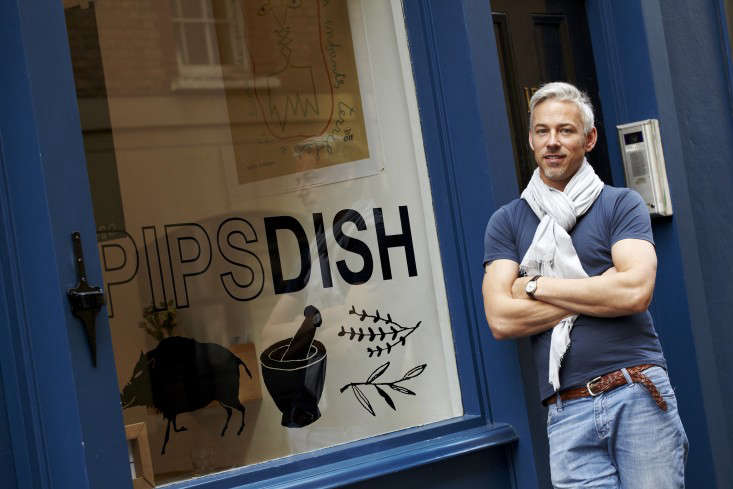 Above: Dundas in front of his new enterprise.

Last summer, we visited PipsDish at its previous location–see London’s Best Below-Stairs Lunch, Hoxton Edition. The pop-up was on the lower level of the British Standard Showroom–see A Kitchen for the People, Courtesy of Prince Charles.

On Gardenista: this week’s Field Guide explores the dark side of Tomatoes.

Below: The location of PipsDish Covent Garden: