As the founder of the product line 8knots, Marcia Bayard has always had an eye for a clean aesthetic. So when she and her journalist husband decided to move out of their East Midtown two-bedroom apartment, which they had called home for the past 20 years, and into the studio across the hall in the same building, the ultimate test of her creativity began. Having lived in the studio 10 years prior to meeting her husband, Bayard knew the space well (she eventually purchased and rented it out while she and her husband lived in their larger apartment). But when it came time to move back in, the space was in need of an overhaul. In April of this year, Bayard teamed up with contactor Frank Rasizzi and custom cabinetry and furniture maker Alan Dorsey to renovate the 550-square-feet of living space, adding strategic built-in furniture and using a mix of raw materials. The result runs parallel with her original vision: a bright, minimal space where she and her husband spend their weekdays (their weekend and eventual primary residence is on Shelter Island).

We were fortunate to garner some insight from Bayard, as well as Dorsey, on the process of renovating the galley kitchen. City dwellers, take note: With a little ingenuity and a lot of vision, this remodel proves that no space is too small for big ideas.

All before photographs by Marcia Bayard; all after photographs by Julia Cawley. To learn more about Bayard's designs, go to Holiday Gift: 8Knots Turkish Towels from Lekker Home. 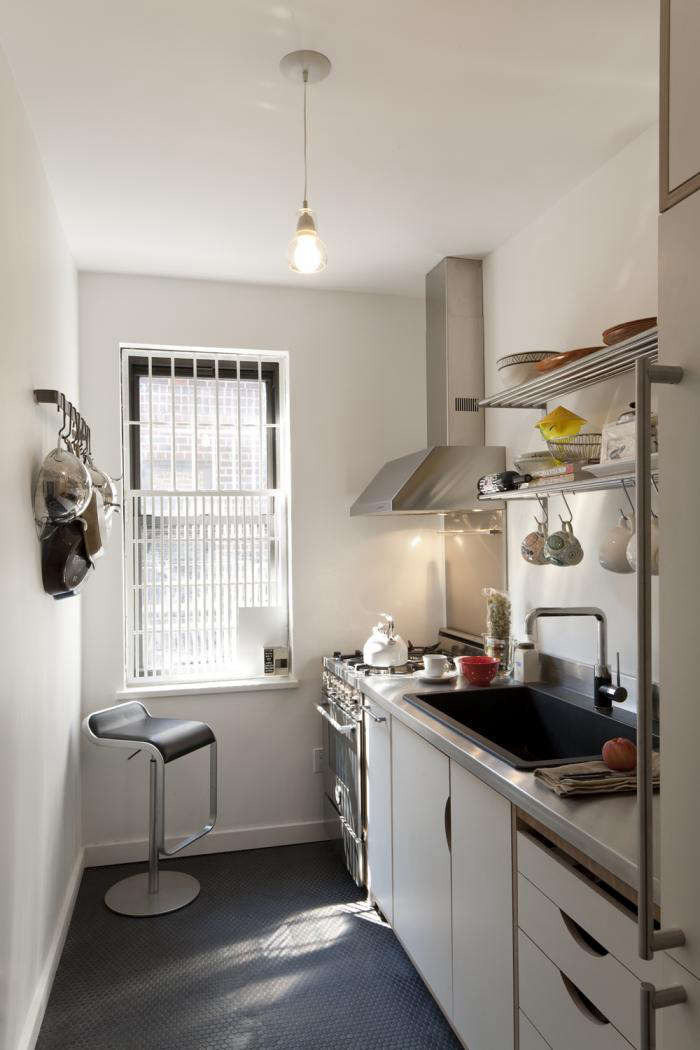 Above: The finished space features an aura of ease and fluidity. One of Bayard's favorite accessories in her new kitchen is the light fixture: the Bulb Pendant Lamp by Danish designer Sofie Refer. "Pure, simple, and iconic, the classic light bulb is symbolic of a brilliant idea." The floor is tiled in Japanese penny round ceramic floor tiles in graphite.

Above: A few features showing the functionality of Dorsey's custom cabinets. The cutting board (L) was Bayard's husband's idea, a detail they had in their previous apartment. When describing the goal of his work, Dorsey says that he likes clean, modern designs "where the coolness is eased somewhat by flashes of natural material." 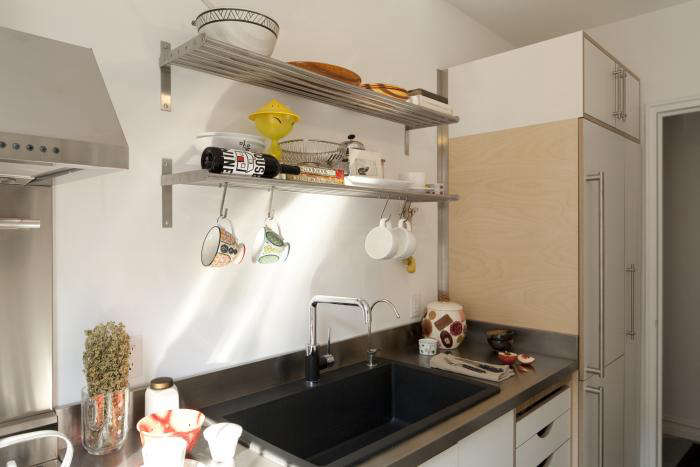 Above: The simple, functional kitchen that was completed a mere several weeks ago. Bayard says that when she started the overhaul, she found inspiration by studying a mix of materials, including textures and colors. When her collaboration on the custom woodworking with Dorsey began, she had her thoughts set on the minimalist finply products of the late artist Donald Judd. "The cabinets are so clean and square," she says. She referred Dorsey to Judd's work, ultimately having him build a very long run of cabinets.

The two had strong synergy when it came to producing the look and functionality that Bayard was aiming for. "I was able to work with Marcia to refine these details and choose materials, but I really just facilitated her working out the big picture herself. This is my favorite kind of job in that I get to help the client realize their own vision rather than me imposing something or them having to settle for a cookie-cutter solution. Not everybody wants to do this, of course, but I find that those who do get so much more satisfaction out of the process and feel better about the design choices, costs, etc. of their renovation." 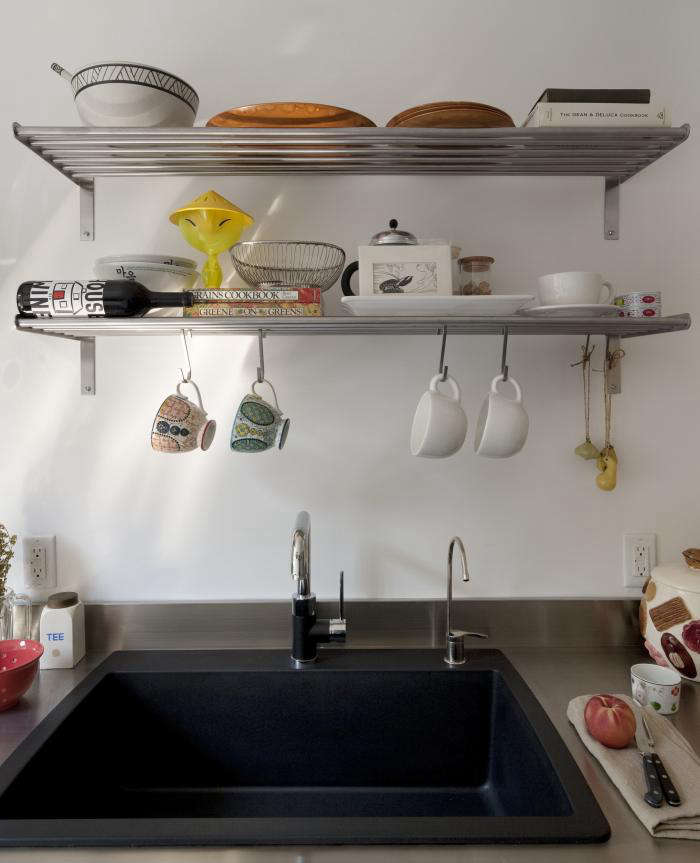 Above: One of the biggest challenges of moving into a smaller apartment was an obvious one: A self-proclaimed "collector of stuff, dishes, textiles," Bayard needed a way to store essentials that was convenient but did not add any bulk to the limited space. When deciding on versatile shelving, she credits the Remodelista post Steal This Look: Stainless and Green Kitchen in Australia for inspiring her to choose the Gundtal Wall Shelf from Ikea. After reading, she went over to the Brooklyn location to purchase the simple industrial pieces. "It was perfect timing." She placed the shelving over her spacious granite composite Blanco Super Single sink in Anthracite. 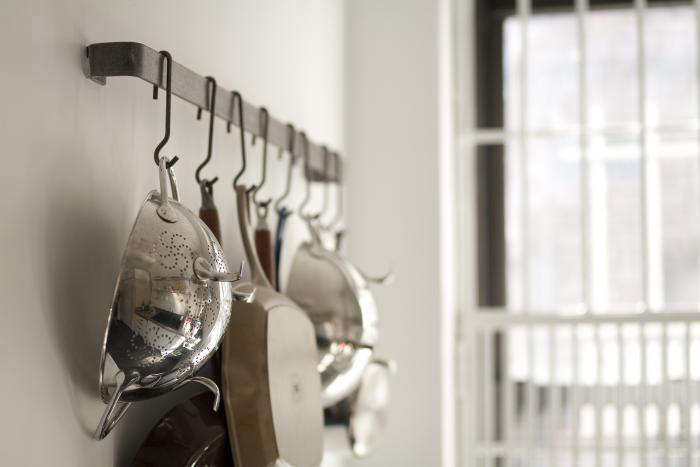 Above: The existing s-hooks and rail on the other wall are the only remains of the previous kitchen. 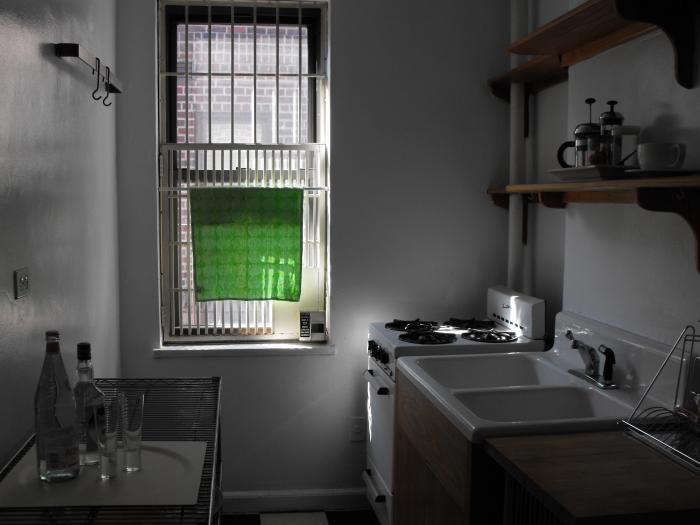 Above: The galley kitchen before the rehab. 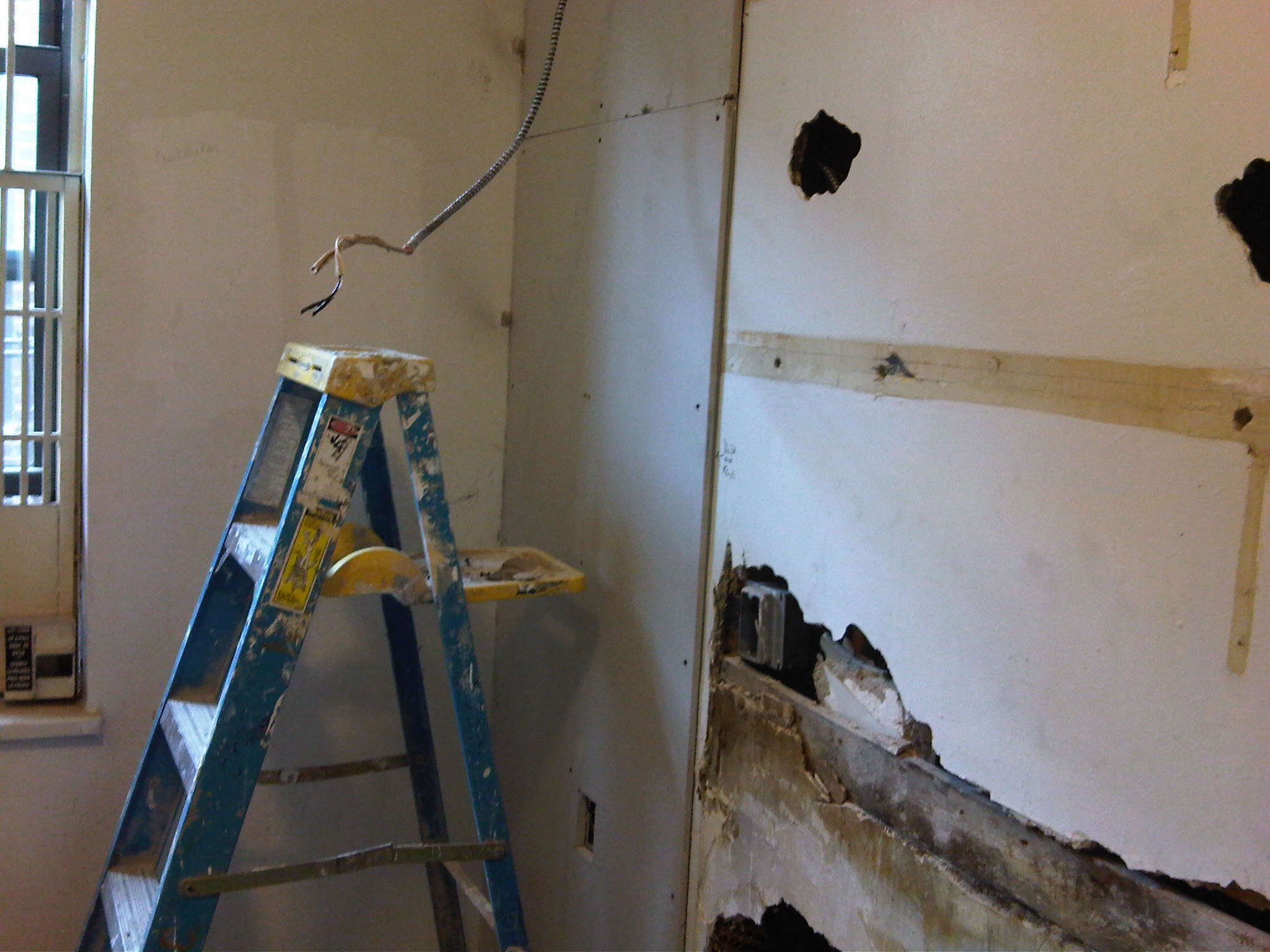 Above: Creating a flush back wall for the new appliances and cabinetry. 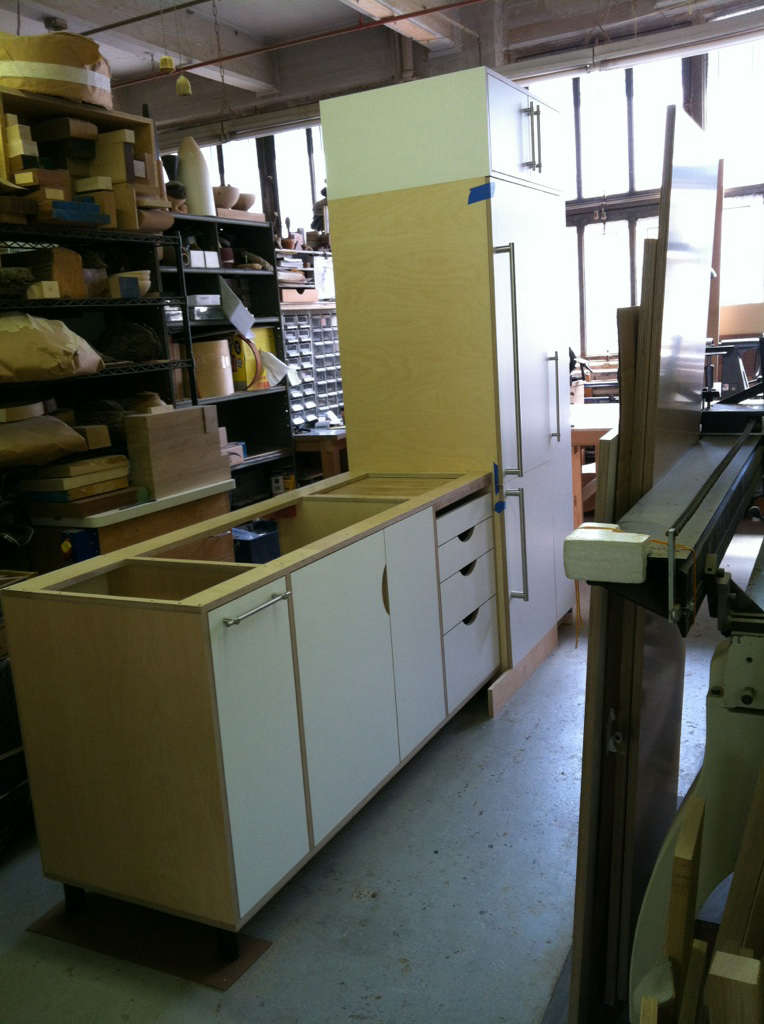 Above: The completed cabinets in Dorsey's Brooklyn studio.

Above: The integration begins. Facing the challenges of a prewar building, Bayard found there to be a gap that ran between the new refrigerator cabinet and wall (R). To create a seamless line and fix the space, Dorsey suggested the incorporation of an L-shaped piece of stainless steel. Rasizzi directed the manufacturing of this, as well as the stainless steel counters; Bayard credits him with handling the big challenge of trying to square the walls in the long run between the gas range and the refrigerator cabinet. 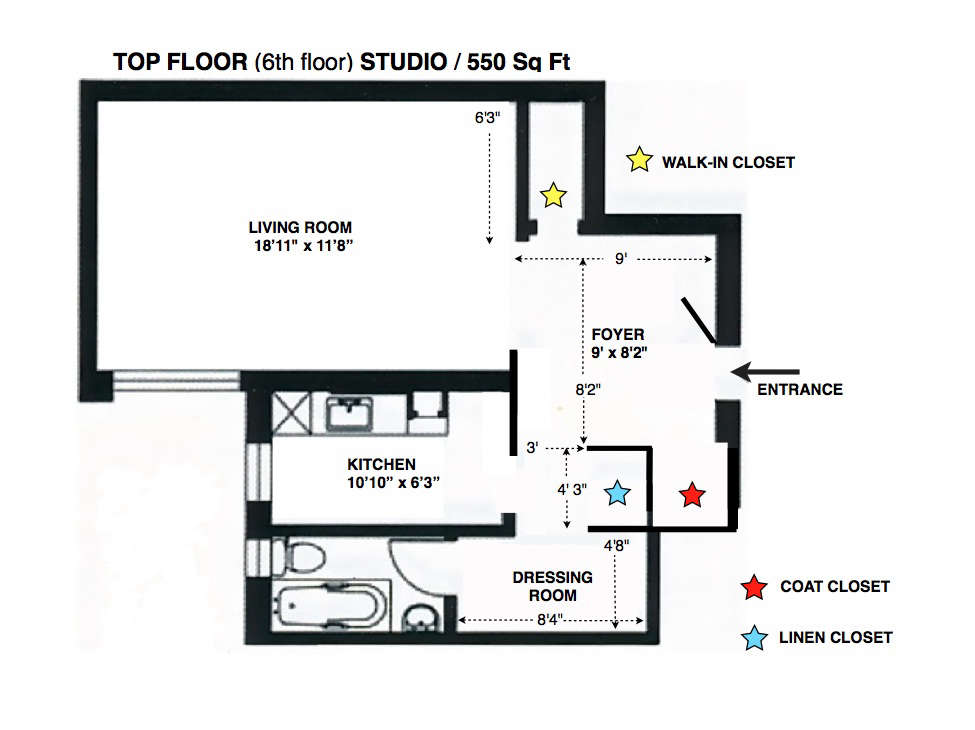 Above: Bayard's layout of the 550-square-foot studio.

If you're looking for more ideas on revamping an urban kitchen, start with these images of small New York City kitchens from our Room Gallery.

House Call: In the Kitchen and Beyond with Kara Rosenlund