Back in 1954, when a one-story house was built on a one-acre lot in Lake Oswego, Oregon, the property had plenty of privacy. No more. With three brand-new houses on the property's perimeter, the owners craved spaciousness and quiet—and didn't want to "feel like they were being swallowed," says Portland, Oregon-based landscape architect Karen Ford. Read on for her solution. 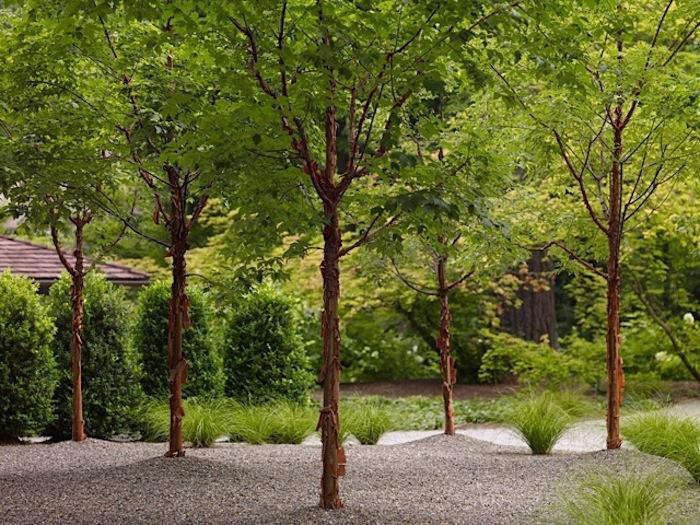 Above: Ms. Ford artfully placed trees and shrubs to provide screening—and structure—in a garden where an objective was to filter or hide views of neighborhood development. Ms. Ford's low-maintenance garden plan complements a Pacific Northwest-style home designed by architect Walter Gordon a few years before Gordon became dean of the School of Architecture at the University of Oregon. Photograph by Marion Brenner. 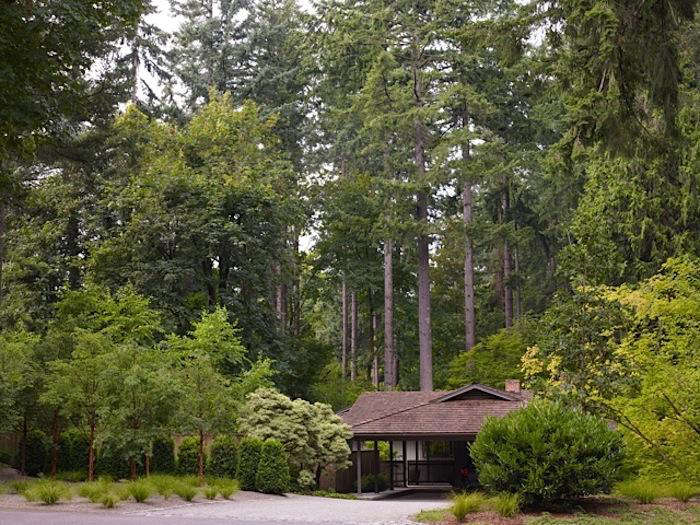 Above: Ms. Ford added 12 Acer griseum trees on a grid pattern (L) at the front of the property. They prefer sun or partial shade. Behind the house is a grove of Douglas firs. "A crew was up in those firs for six days cleaning them out and making them nice," Ms. Ford says.

Ms. Ford replaced an asphalt driveway with gravel. "It's a lot more permeable than concrete or asphalt, but still pitched and drained," she said. To get a properly compacted surface, she used six inches of compacted base rock, two inches of decomposed granite, and one-half-inch layer of gravel. Photograph by Marion Brenner. 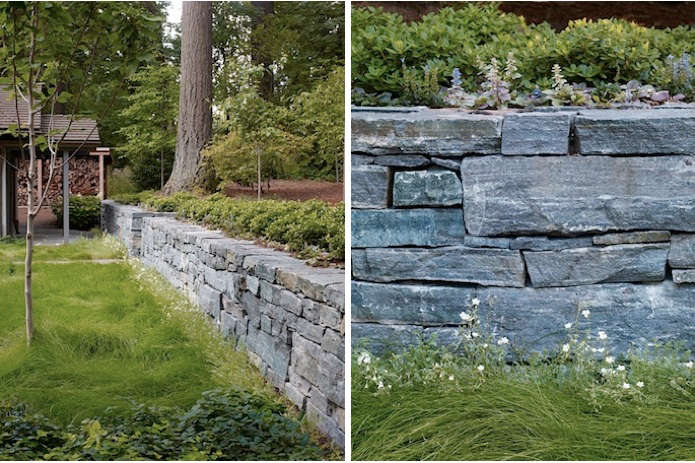 Above: Ms. Ford replaced a "a funky curved wall bordered by rhododendrons and azaleas. it was like it didn't even belong to them; the lines of the house are really straight," she said. The design of the new wall accommodated two existing Douglas firs (L). The wall adjacent to both trees sits on two steel plates so as not to disturb their roots. Photograph (L) by Marion Brenner. 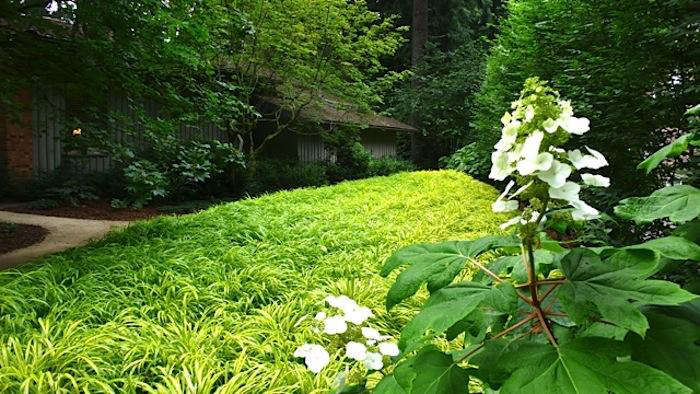 Above: A meadow on drip irrigation covers the property's septic field; a hydrangea quercifolia 'Alice' (R) blooms at the edge. Covering the meadow is perennial grass Hakonechloa macra 'Aureola.' "We didn't want to dump a ton of water in that area," says Ms. Ford. "it's good to keep the area as natural as possible if you can." 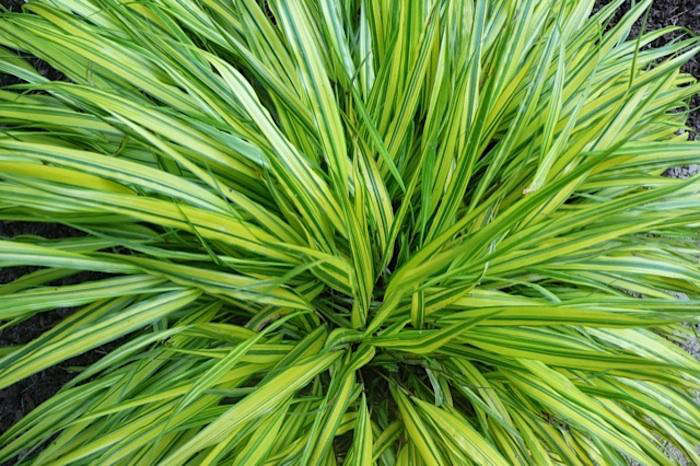 Above: The variegated leaves of Hakonechloa macra 'Aureola' have narrow green stripes. It grows in dense, spreading clumps that reach heights of approximately 15 inches. 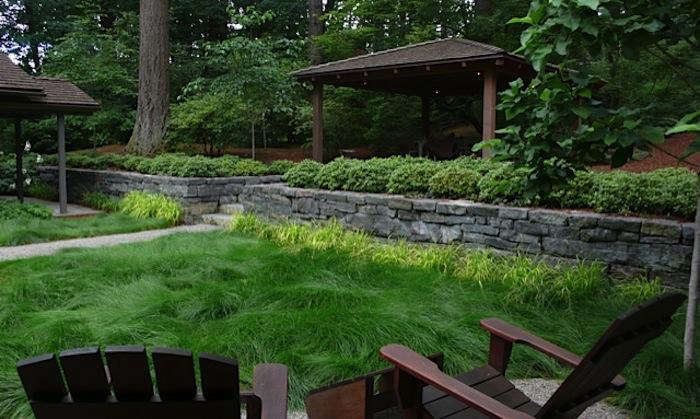 Above: Behind the main house, Ms. Ford designed a covered structure that repeats the same pitch as the roof on the main house and which accommodates the clients' large parties. For privacy, at the same height of top of roof of structure are 25 prunus lusitanica evergreen shrubs that will reach heights of nearly 20 feet.

"Having a structure in the back brings everything into better scale by providing a focal point out there," Ms. For says. A lot of the lower branches on the existing Douglas firs were dead. "The structure fills that empty mid space and helps bring the trees visually back into the garden," she says. 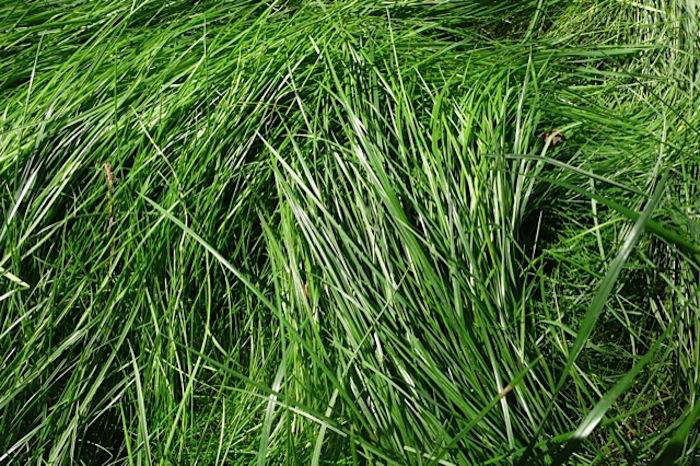 Above: A no-mow festuca rubra grass was seeded in topsoil on top of six inches of sand for drainage. Two months later, it was a dense lawn. "Every year we mow it, rake it, thatch it, and re-seed it once in late March or early April and then do nothing else," says Ms. Ford. "It's a magnet. People take their shoes off. Kids want to play in it. People want to do handstands in it."

The clients told Ms. Ford their plan was to remain in the house in old age rather than to move elsewhere; a low-maintenance lawn of no-mow grass is part of their plan to "age in place." 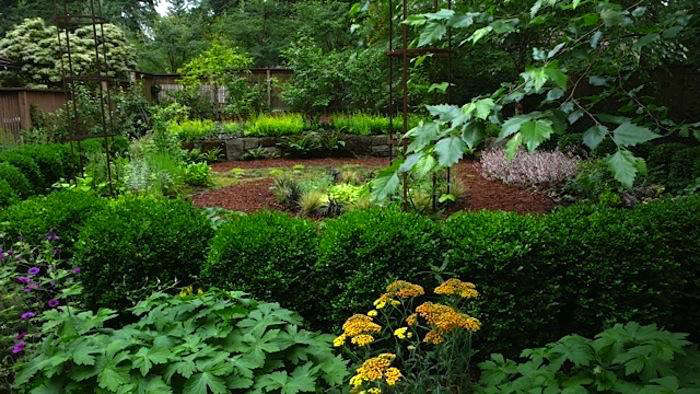 Above: The clients' circular vegetable garden, designed by Ms. Ford, incorporates a recycled wall, re-using same basalt stones from the previous garden. Ms. Ford is not a fan of raised beds. "I like gardening at grade and think you can do a much better job with double digging," she says. "Raised beds are expensive, and they're harder to dig into."

Behind and above the wall grow oregano, persimmons, blueberries, and espaliered apple trees. 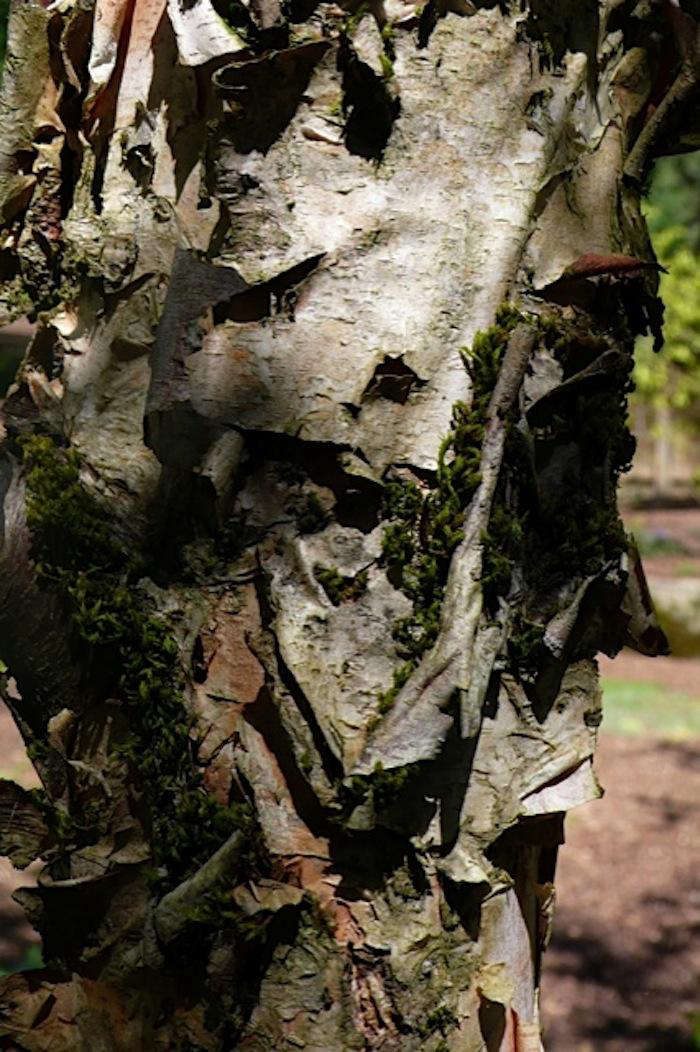 Above: Betula nigra trees were used for screening in the vegetable garden area. "Their bark peels, which is beautiful," Ms. Ford says.

Pottery with a Sense of Place