We've been prowling around the Marin Country Mart since Jim Rosenfield took it on as a project (he's the force behind the Brentwood Country Mart in Los Angeles). Among the many spaces we admire? Rosenfield's own office, where he conducts his daily business.

For his own Gold LEED certified offices, Rosenfield wanted a place that felt like home. "I love work," he says, "and I want the space to feel like home, since this is where I spend a lot of my time." It's also a showcase of sorts for his highly evolved aesthetic: "This is a place where people come to see the potential of the spaces."

Rosenfield's profession is shopping for shops. As owner of the reimagined Marin Country Mart (he also owns the Brentwood Country Mart and the Montecito Country Mart), he's always on the lookout for like-minded retail and restaurant talent. He has a meticulous eye for design, and oversees the look and feel of each of the stores, either collaborating with the owners or taking on the design himself. 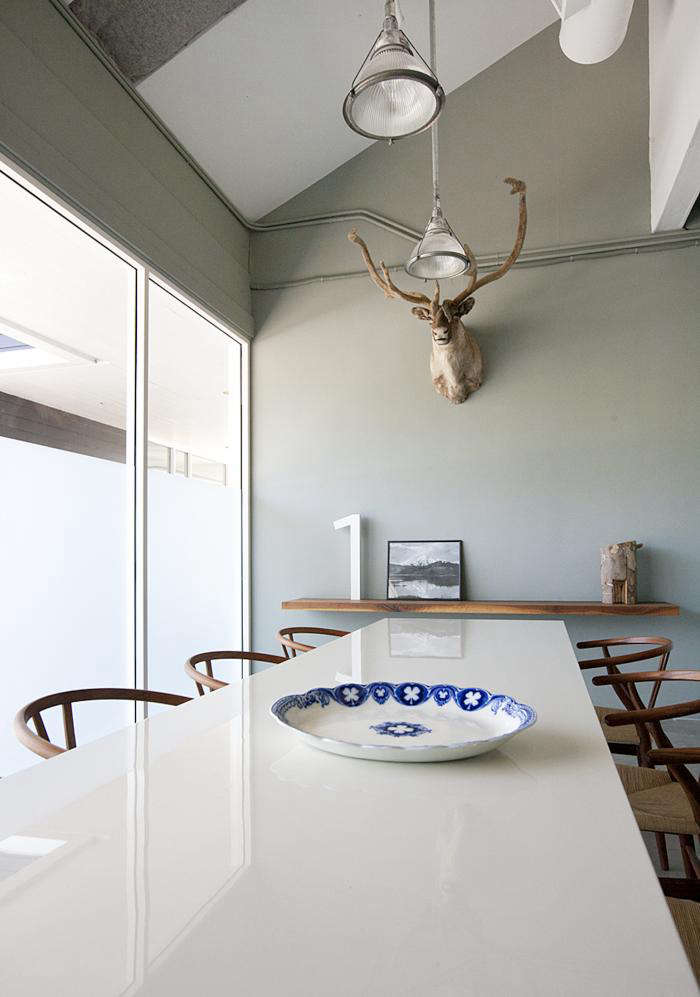 Above: Rosenfield worked with architect Hans Baldauf of BCV Architects; initially, they discussed opening up the space, but in the end they preserved the original wall structures, opening up the ceiling where possible and relying on barn doors to connect the work space. A blue and white platter from Heritage Culinary Artifacts in Napa's Oxbow Market anchors the long conference table. 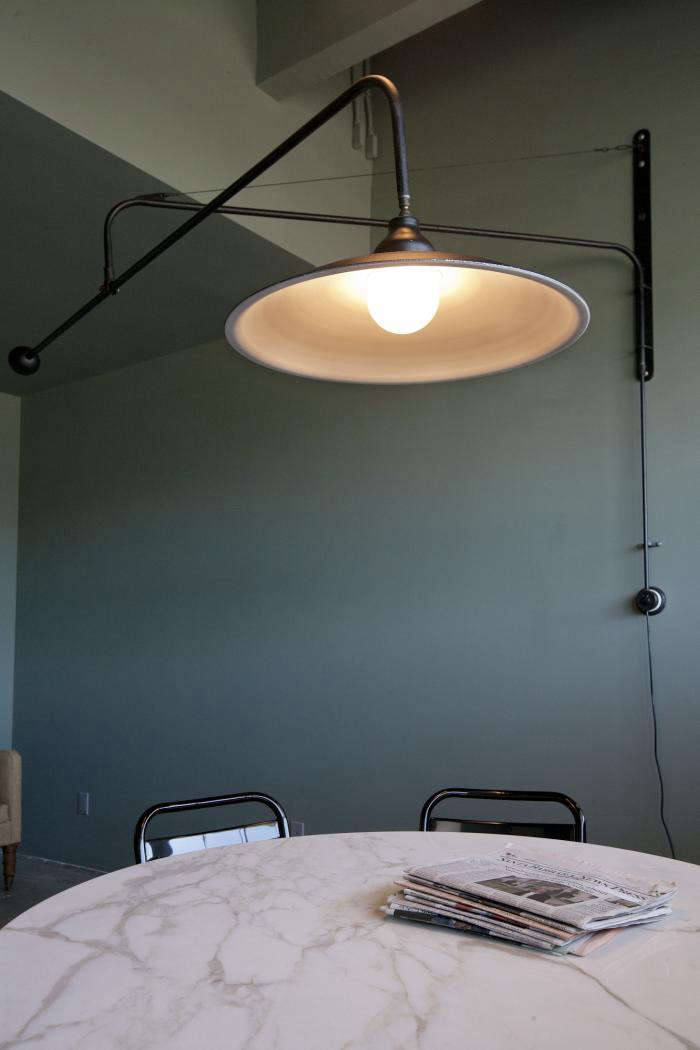 Above: Rosenfield's office is dominated by a vintage architect's light that Ray Azoulay at Obsolete found for him (the lamp moves the breadth of the room, and can be raised or lowered as needed). He found the metal cafe chairs in Napa and had them powder-coated black. Throughout the office, Rosenfield used paints from Farrow & Ball in a palette of Down Pipe, Pigeon, and All White. 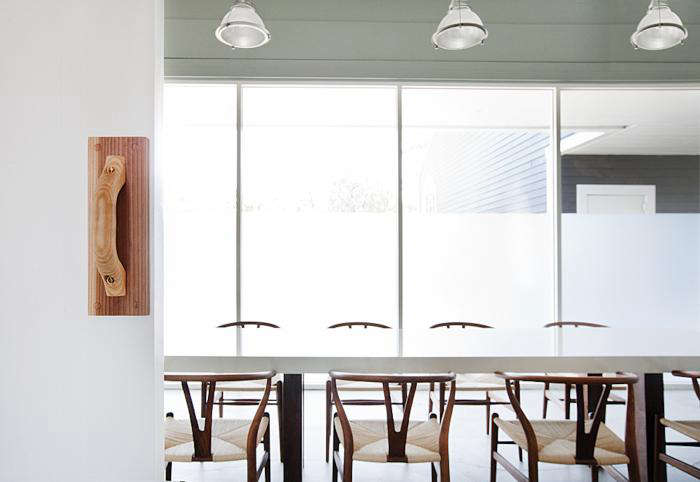 Above: The custom conference table was inspired by a surfboard; made by Scott Constable of Wowhaus, the hollow top sits on walnut legs. The handle on the sliding barn door to the conference room is a trowel used for plastering that Rosenfield sourced at the local hardware store (he first noted them being used as handles for trash-can lids at a resort). 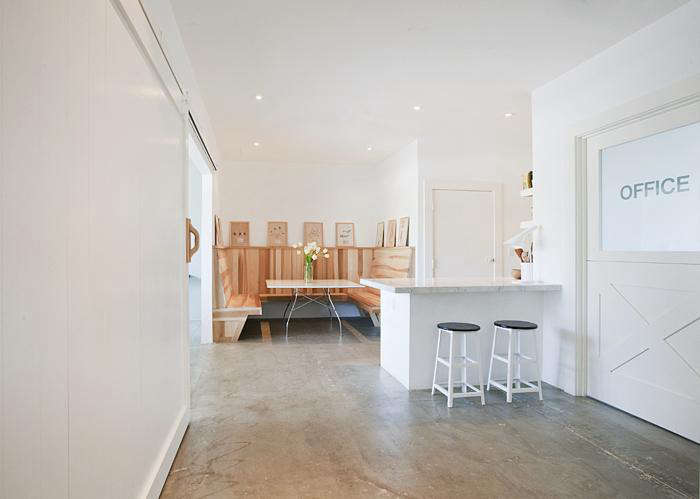 Above: Rosenfield has long admired the wooden booths upstairs at Chez Panisse and designed something similar for his own offices. He consciously placed the untreated strips of fir to run both vertically and horizontally, a concept he borrowed from 20th century LA architect Gerard Colcord, whose work he admires. 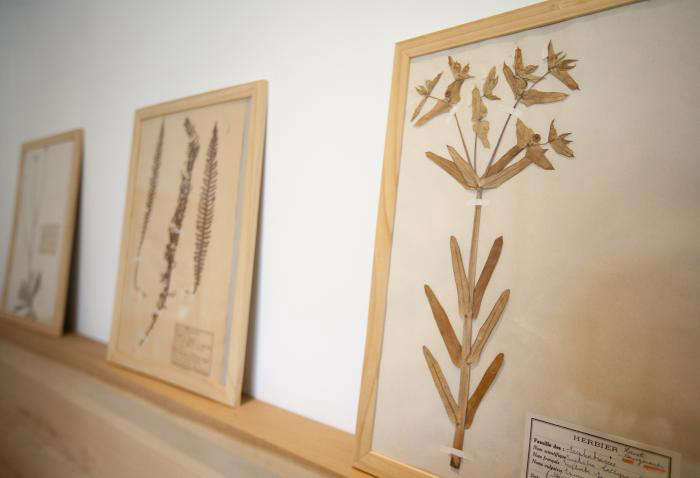 Above: Rosenfield picked up a collection of framed pressed flowers on a trip. 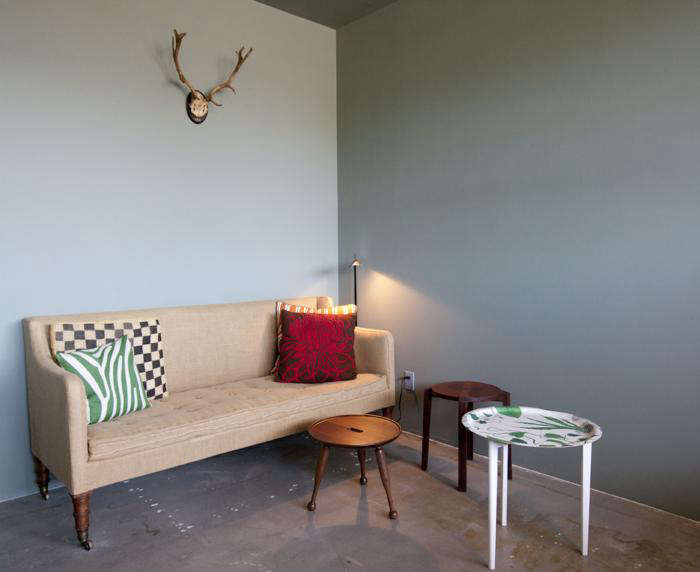 Above: Rosenfield picked up the clubby sofa on a trip to the UK; a prototype cushion from A Detacher mingles with cushions made with fabric from Raoul Textiles. The Josef Frank table is from Svenkst Tenn (Rosefield and his wife fell in love with Frank fabrics on a recent trip to Copenhagen). "I collect stools made by local artisans," Rosenfield says. "The one closest to the wall was made for Alice Waters' Edible Schoolyard." 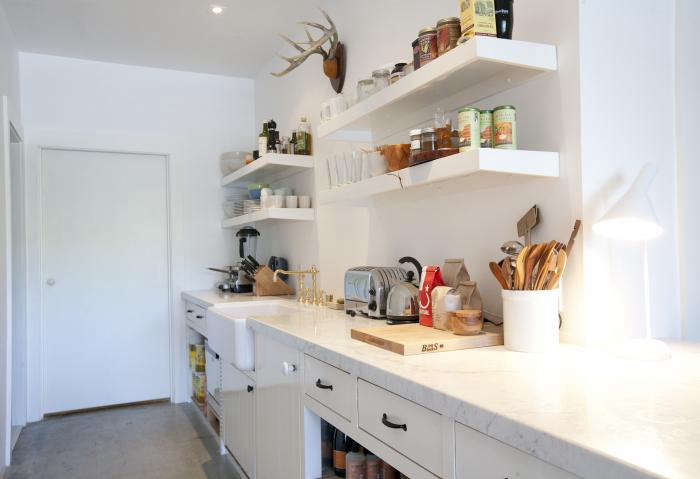 Above: The open kitchen features a Carrara marble counter, which extends into the office area to proved counter seating as well as to give the space a residential feel. The drawer handles come from Liz's Antique Hardware in LA (Rosenfield confesses to owning an extensive collection of hardware). 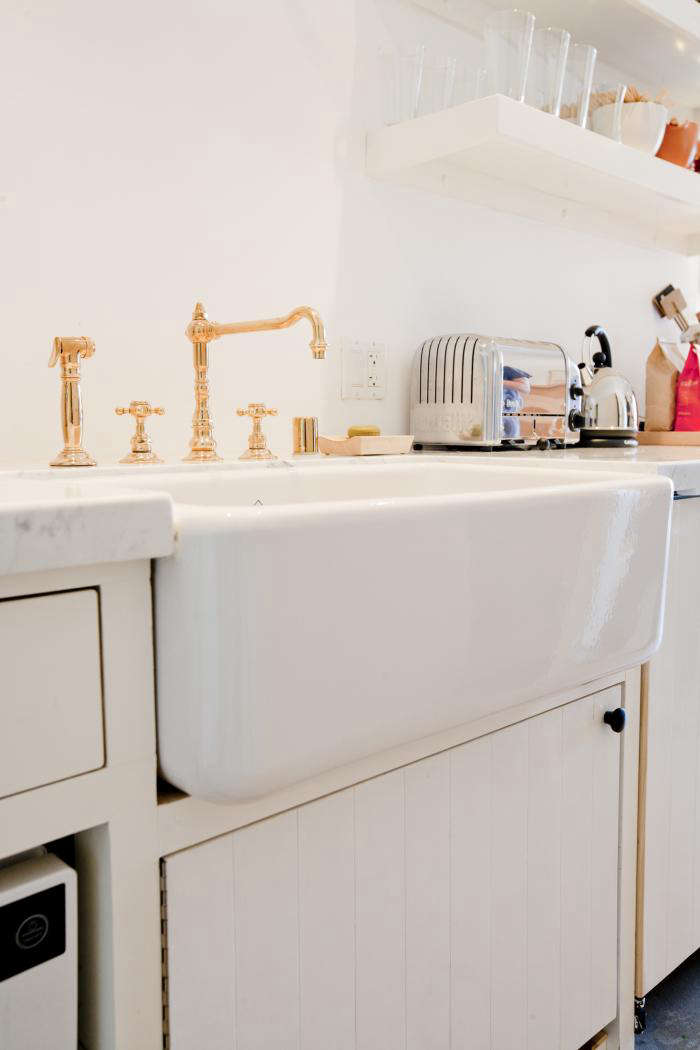 Above: The sink is a Shaw's Fireclay Apron Front and sits above a small refrigerator covered in a wood-paneled front. 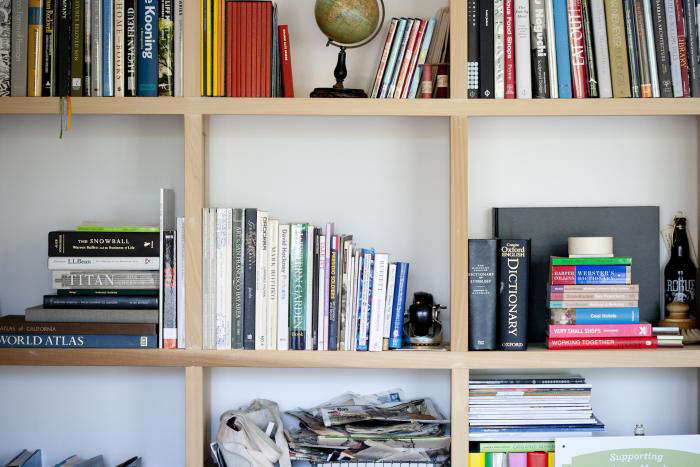 Above: A wall of built-in Douglas fir bookshelves houses Rosenfield's collection of design and travel books, as well as the occasional spare door knob and hook. 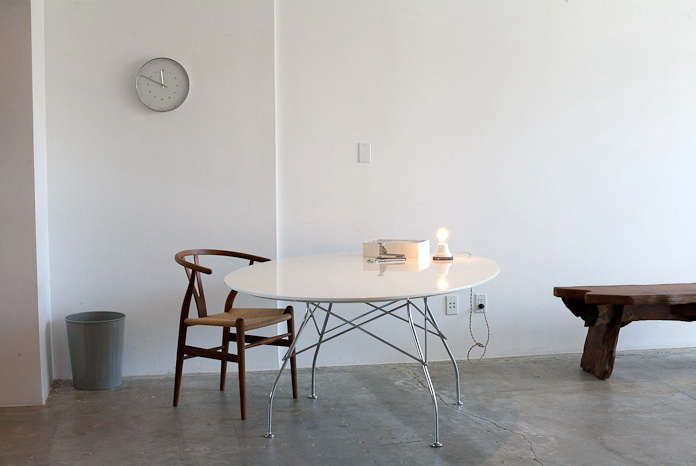 Above: Rosefield was inspired by Tyler Hayes' BDDW space in New York, which has no baseboards. "It's a much nicer, cleaner look. Tyler takes it one step further, covering the outlet plates so there are only two small holes showing." The table in the entry area was purchased from Greg Turpan. The Ion Lamp and Steel Waste Basket are from Schoolhouse Electric. 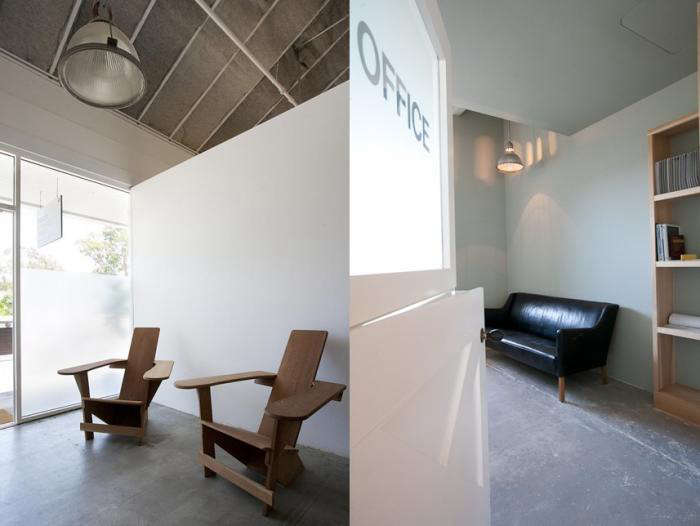 Above: The chairs in the office entry are from Greg Turpan. The ceiling is insulated with wool, a detail Rosenfield admired on at trip to Daylesford Organic Farm in the UK. All of Rosenfield's properties feature Dutch doors which meant building extra-wide door frames to accommodate them.

Deal of the Day: Artfully Distressed Sofas from Clarke & Reilly

The Architect Is In: Roof Gardens with Pulltab Design

The Remodelista List: 20 Architects, Tastemakers, and Designers to Watch in 2023