Like so many people who come upon a dream fixer-upper, Jeremy Wortsman searched for a compelling reason to buy the needy midcentury house minutes from his family’s own place in the lush Dandenong Ranges, east of Melbourne. An American transplant, Wortsman, who grew up in NYC, traffics in creativity and quickly came up with an answer. He is the owner/director of The Jacky Winter Group, a growing creative services agency that represents illustrators, and he decided to overhaul the house and its gardens as a showcase for his artists’ work.

Architect-stylist Sarah Trotter of Hearth Studio was enlisted to take on the extensive, cost-conscious remodel. Her results now operate as the Jacky Winter Gardens, a playfully inventive guesthouse that also offers a monthly artist residency (and like Wortsman’s agency is named after Australia’s jacky winter robin). Look no further for evidence of the ways art and nature can transform an interior.

Photography by Rhiannon Taylor of In Bed With.

Above: “The house is surrounded by such an exquisite natural environment that our aim was to create an interior to match the splendor,” says Wortsman. Over on Gardenista, we’ll be fully exploring the grounds.

The cabin-like structure dates to the 1950s and has a corrugated metal roof and its original wood siding. Described by Wortsman as “a patchwork of rooms and divisions added over time,” it’s been opened up and reconfigured into a one bedroom with a detached studio in the back that predates the main building. 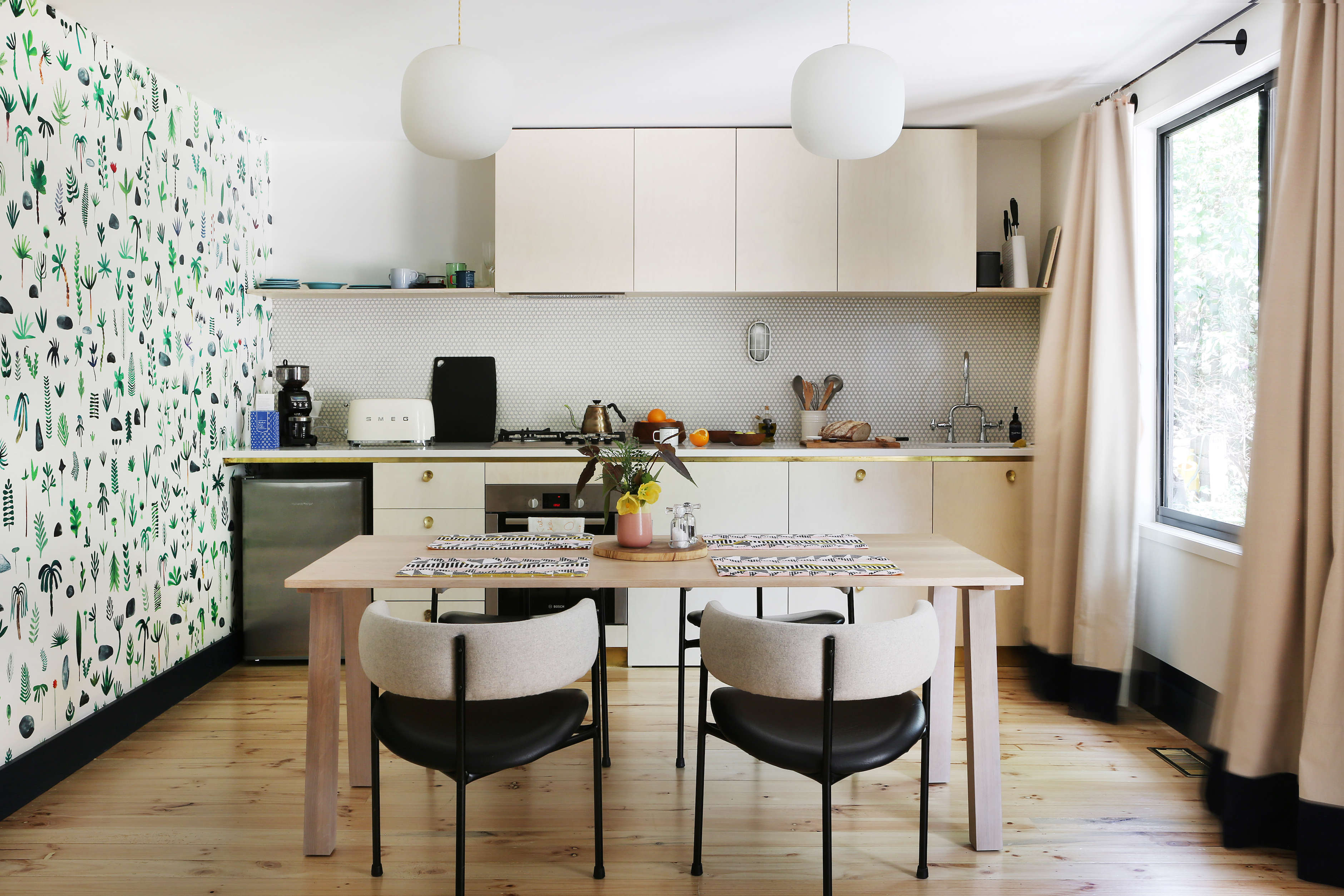 Above: The kitchen was originally located at the rear of the house which overlooks Clematis Creek. It made sense to flip the plan and move the kitchen to the front adjacent to the living area. And though compact, there was room for Sarah Trotter to have some fun: “As a guesthouse, we don’t need things like a family-size fridge or every single pot and pan and accessory,” Wortsman points out.

Trotter’s solution included a wall of custom wallpaper by illustrator Marc Martin, and, in her words, “an inky paint datum that runs through the house”—and alludes to the roaring waters just outside. The dark band is echoed here in the hand-stitched curtains that hang from rods made for the house by Like Butter. The three-legged chairs are vintage and of unknown origin (Wortsman notes, “they were found in Melbourne and have seventies-looking labels”); Trotter reupholstered them to work with a Dove Dining Table by Nomi of Sydney.

Above: The custom cabinets are detailed with Brass Cloud Handles by local metalsmith shop Rowsaan. Kitchens, not surprisingly, are a speciality of Trotter’s; see another by her in Kitchen of the Week: A Seventies Overhaul.

Above: A new arched passage links the kitchen to a library stocked, of course, with illustrated books. Marc Martin’s palm-patterned paper was initially created for a zine and a children’s book. 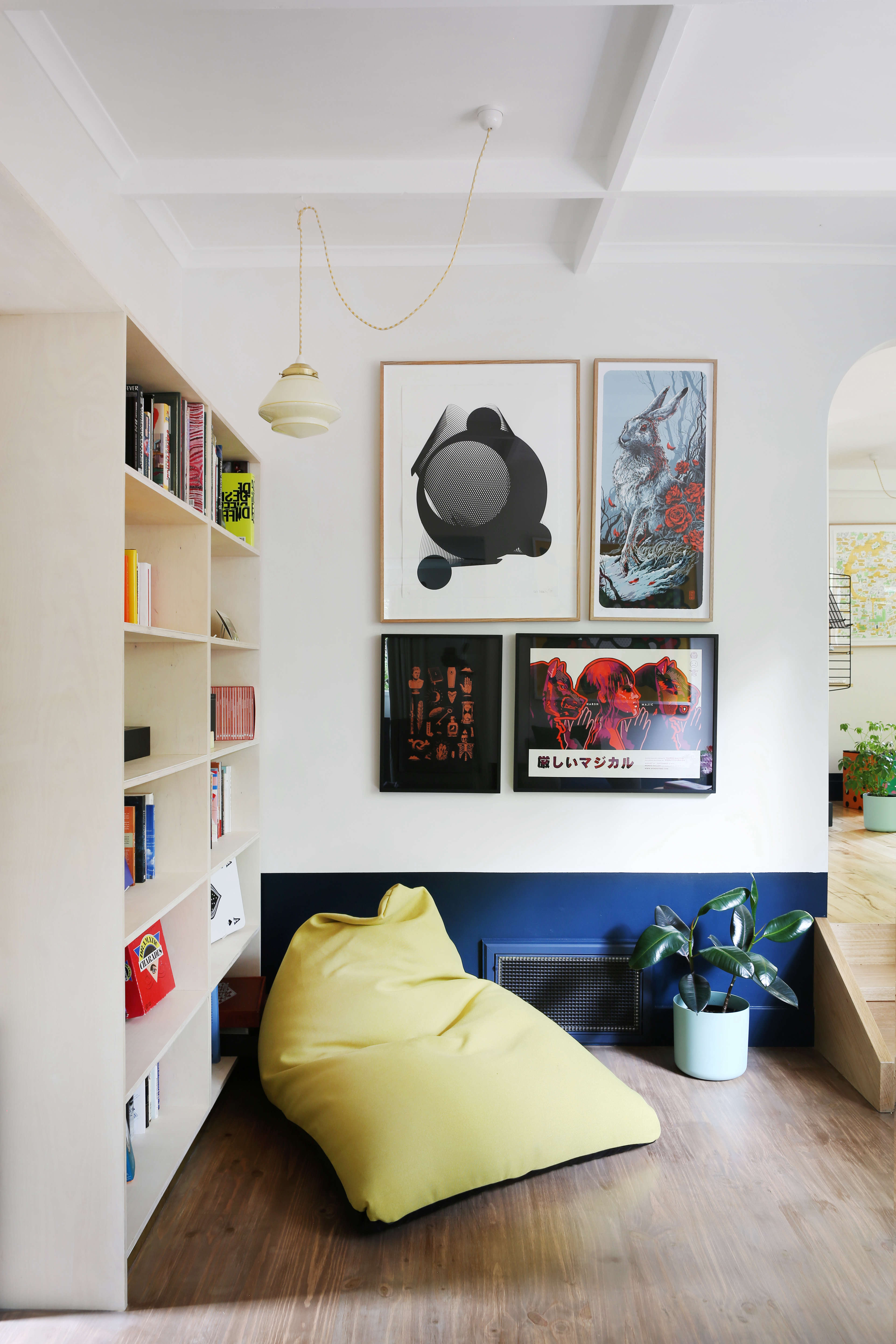 Above: A beanbag chair awaits next to the stacks. 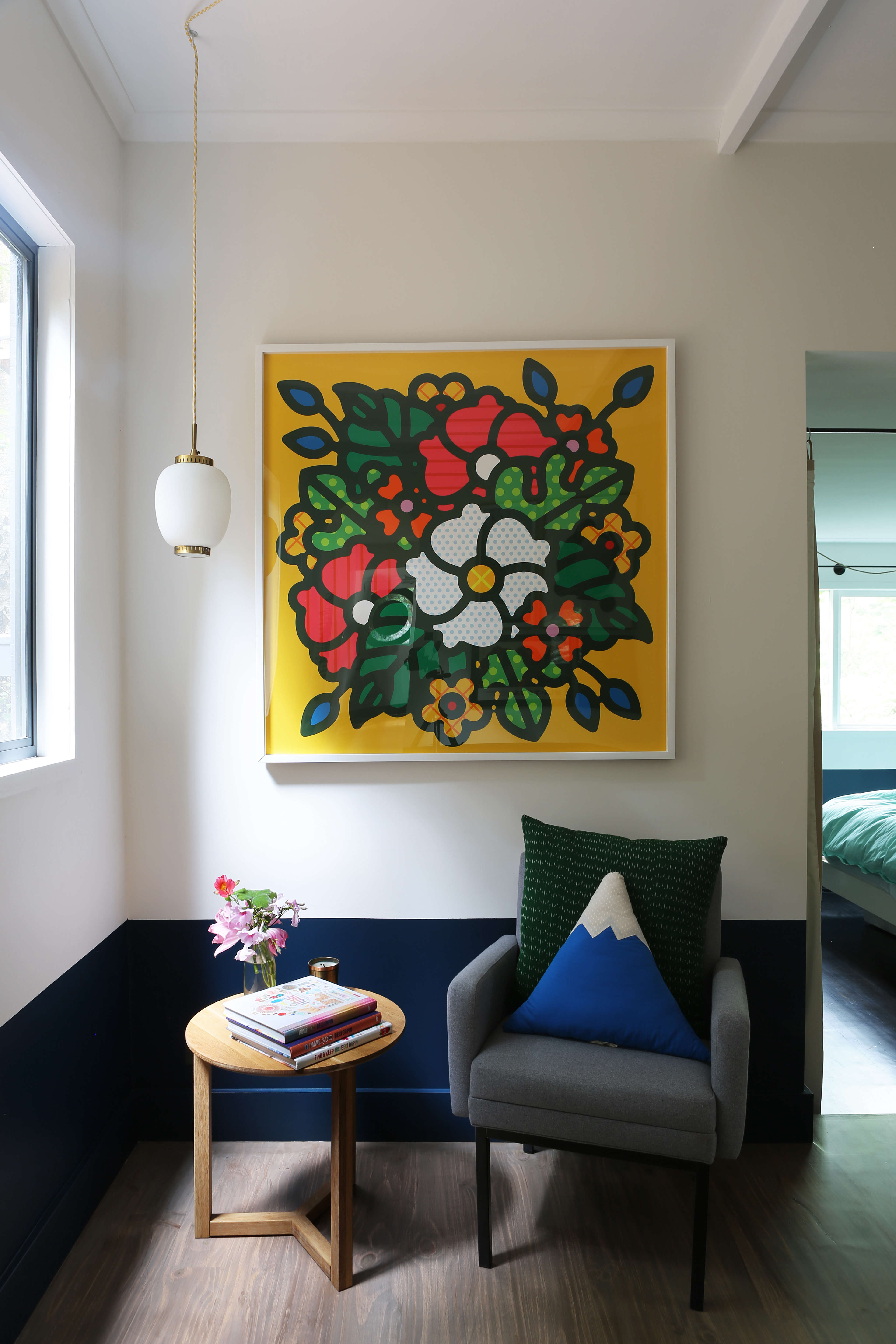 Above: A flower print by Craig Redman hangs over a Mountain Cushion from Arro Home, a company under the creative direction of illustrator Beci Orpin. 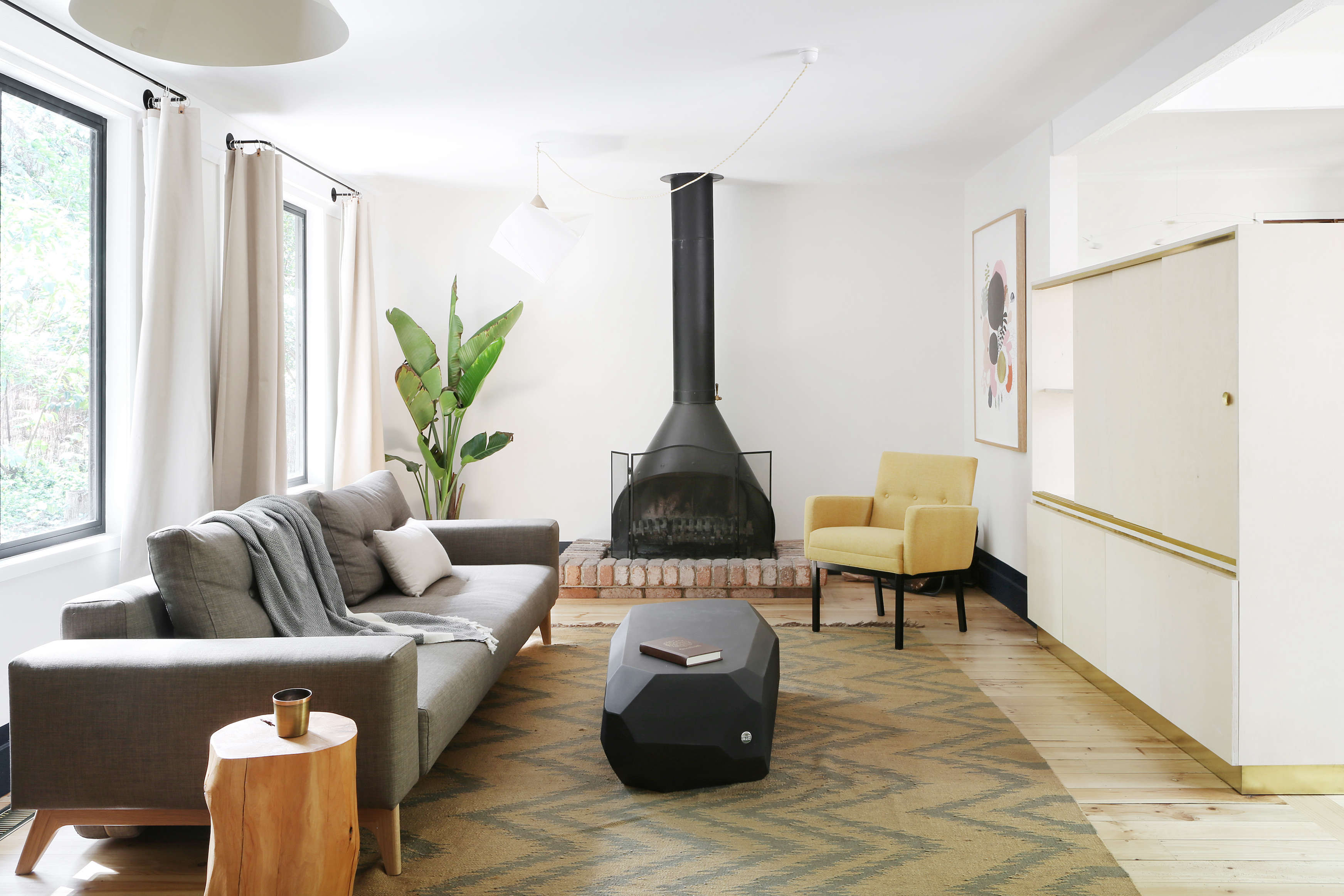 Above: The living room retains one of the only preserved elements in the house: the wood-burning stove. Sarah Trotter designed the brass-accented cabinet to divide the room from the sunroom and hide the 55-inch TV. The sofa took some searching to find—”the retreat is really designed for one to two people, but I wanted to allow for families or groups, so a sofa bed was key,” Wortsman told us. He found this one, the Cassius Dual, at an Innovation Living floor sale. The coffee table is from Arik Levy’s Meteor Collection for Serralunga. 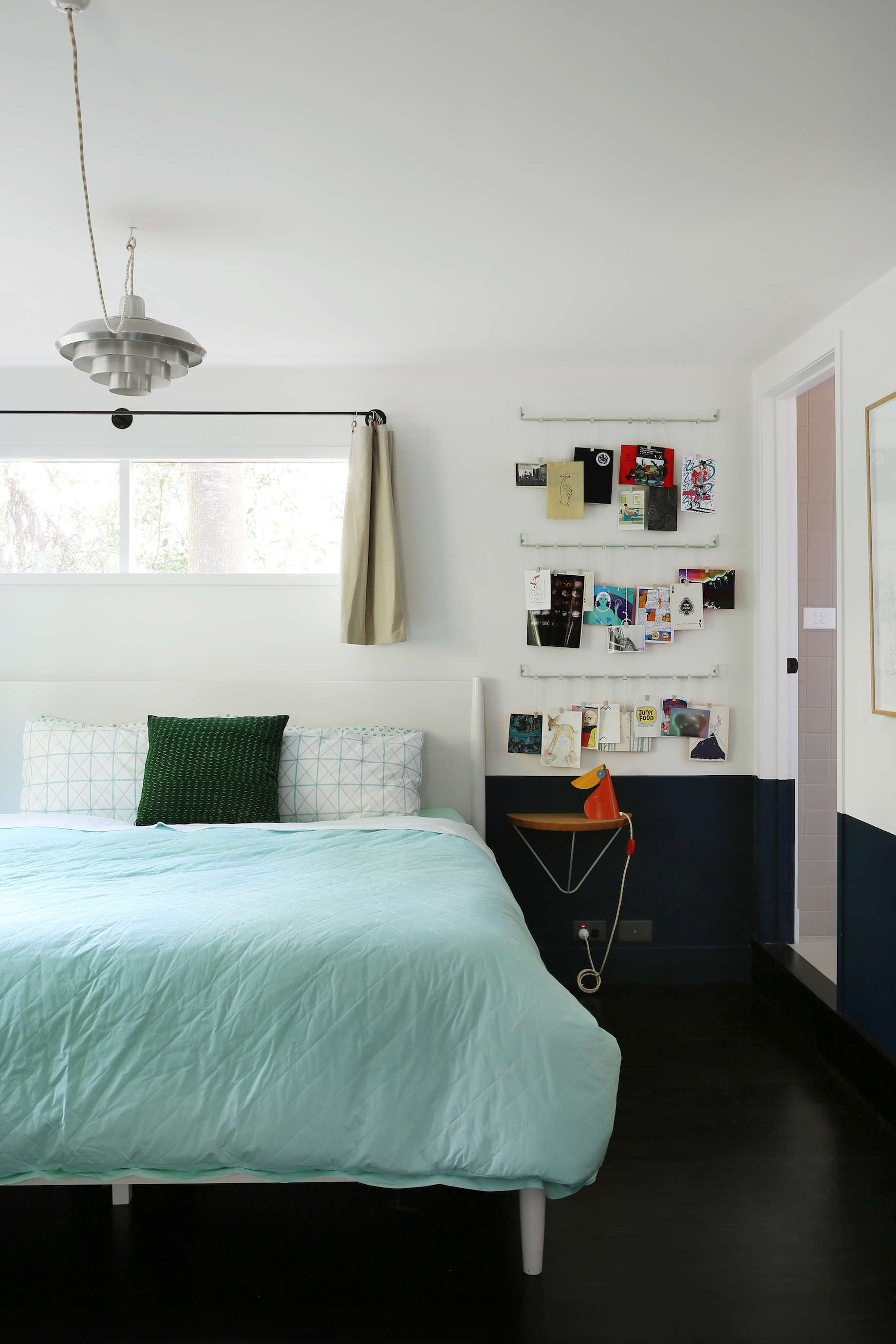 Above: Work by Jacky Winter Group artists is displayed on Ikea metal racks that were powder coated to match the side tables. The bed linens are by Jardan—”the only thing we could afford at their annual warehouse sale,” says Wortsman. 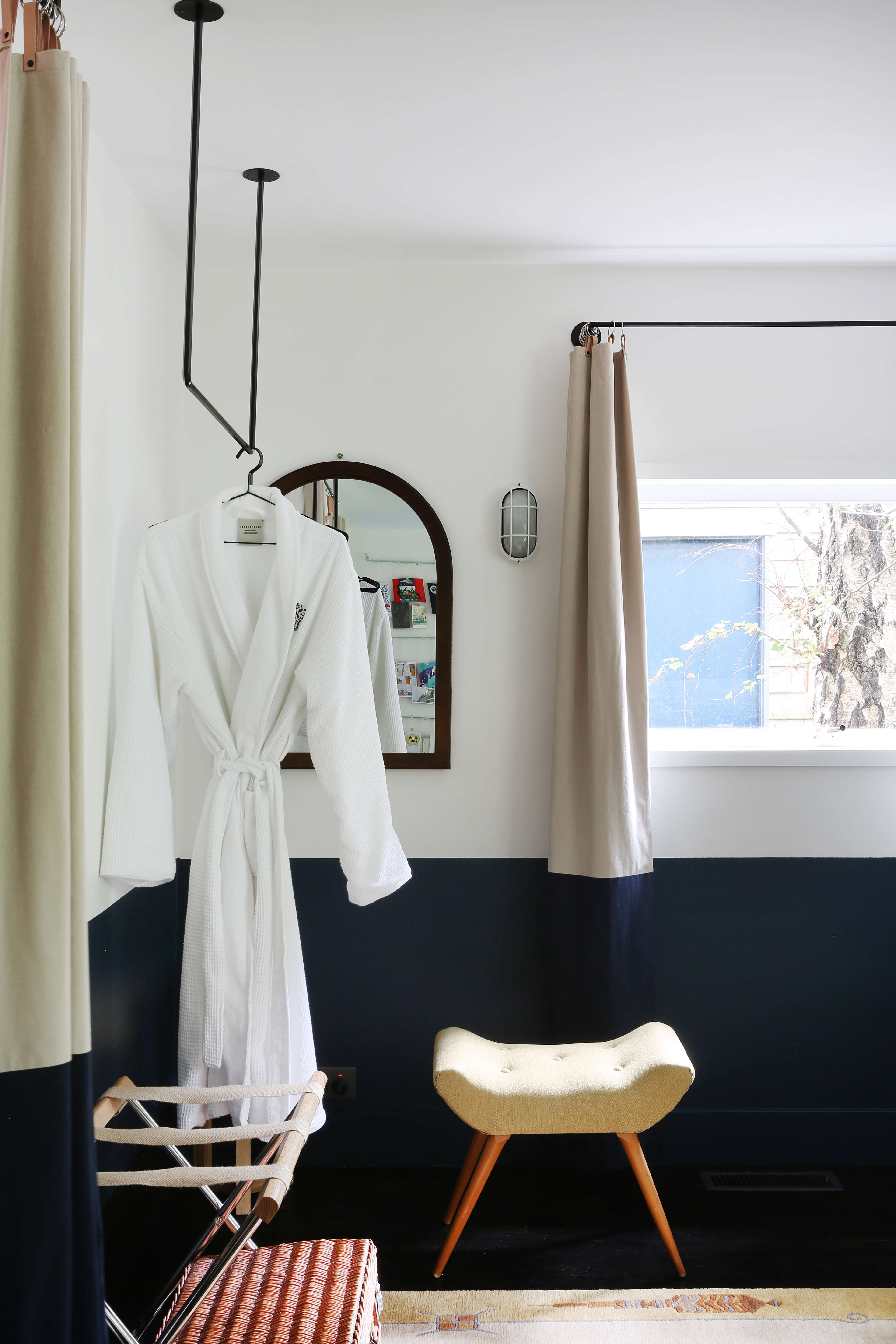 Above: In lieu of a closet, the room has a custom metal clothes rod. Note the wider blue accenting here: “As you walk from the entry to the library to the bedroom, the house further backs onto the creek,” explains Wortsman. “We explored this idea of going into water through the use of the datum line, so you feel it literally engulfing you as you walk in.”

Above: The penny tiles used in the kitchen as a backsplash reappear in the compact bathroom, which has a wet area with integrated shower and soaking bath. “Sarah found this amazing film still of Bill Murray sitting in a some sort of steam room; we wanted to make the room look like that.”

Above: The deep tub has a built-in seat. Penny tiles are a modern classic detail that are surprisingly affordable. 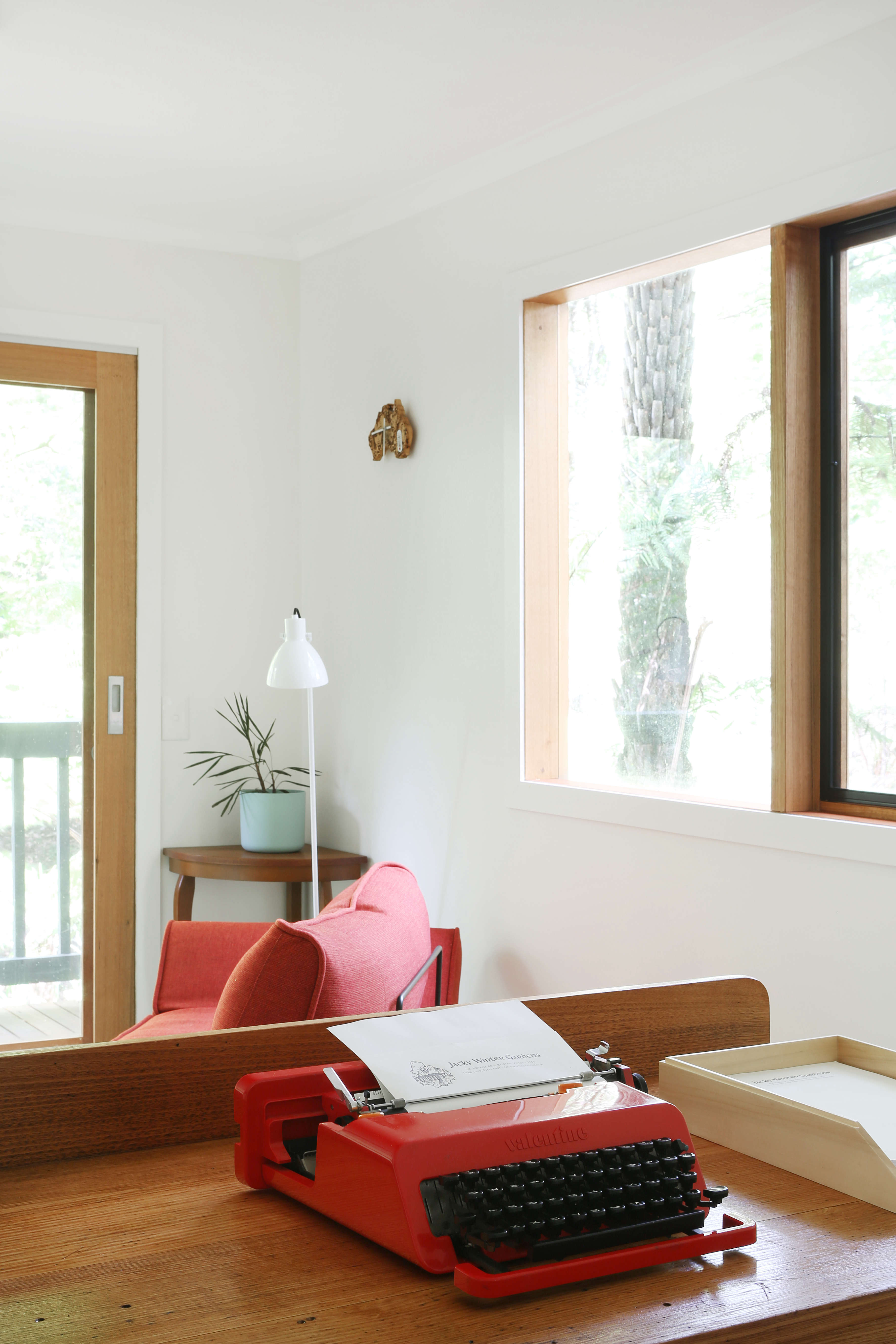 Above: The studio—with a 1968 Olivetti Valentine typewriter—has a deck that overlooks the creek. The red sofa doubles as a twin bed, so the house when fully occupied sleeps five.

Above: The jungly back of the house; go to Gardenista to see more. 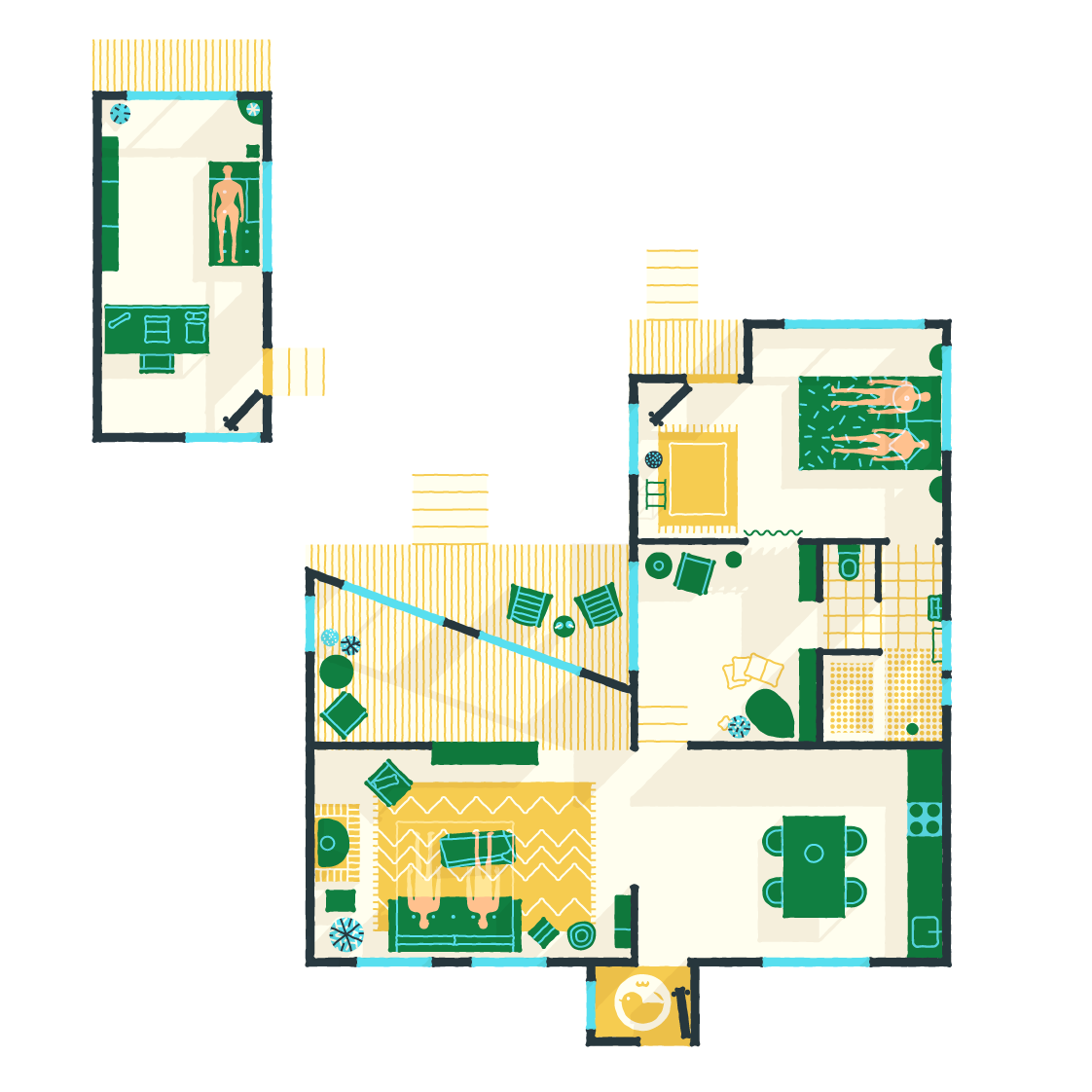 Above: A floor plan by Lachlan Conn shows every bed put to use, including the living room sleep sofa.

Jacky Winter Gardens is located in Belgrave, Victoria, a 45-minute train ride from Melbourne. Though set in the wilderness, it’s within walking distance of the station and the center of town.

Take a look at two more art-filled places to stay:

Trending on Gardenista: Clean Up