We recently paid a visit (camera in hand) to Tissus Tartares founder Nathalie Farman-Farma's Chelsea home. Farman-Farma has incorporated her own fabrics throughout, pairing them with a collection of antique furnishings from far-flung places (Iran, Russia, France). Farman-Farma cofounded textiles company Tissus Tartares with her friend Olya Thompson in 2010; the duo produces fabrics featuring what they call a "Eurasian asethetic reflecting the rich and sophisticated interplay between East and West found in Russian, Persian, and Central Asian designs." The saturated colors of the hand-printed fabrics, which are produced in France, and the romantic, eclectic prints evoke another time and place. To see the full line of fabrics, go to Tissus Tartares; in London, the fabrics can be seen (and procured) at Luke Irwin on Pimlico Road.

Photography by Stephane Gripari for Remodelista. 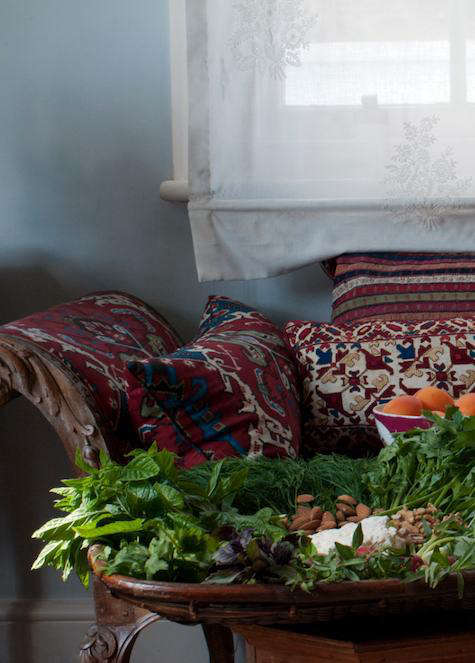 Above: In Farman-Farma's sitting room, a French 18th-century banquette is upholstered in Tissus Tartares' Lermontov print, inspired by kilims. The pillows are made out of old Persian djajims and Hungarian embroidered fabrics. 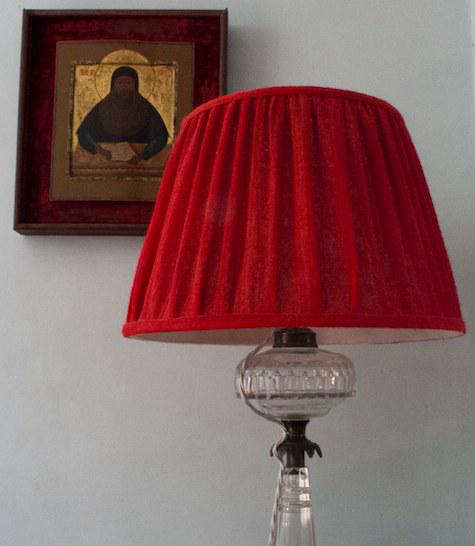 Above: A Russian icon of St. Maxim the Greek, framed in red velvet, alongside a converted oil lamp. 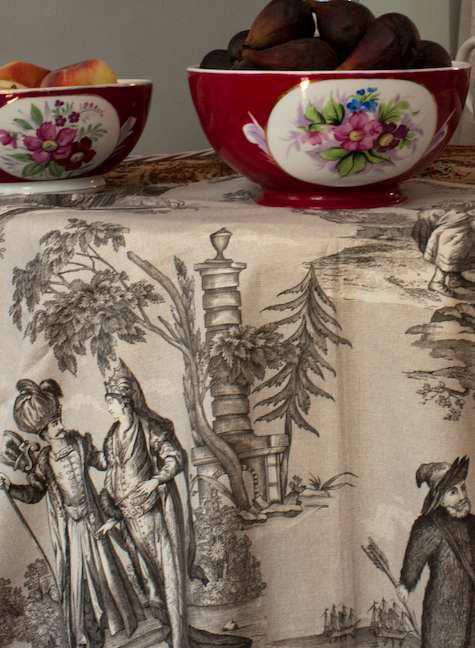 Above: A tablecloth featuring Tissus Tartares' Toutes les Russies, a Toile de Jouy based on a set of 18th-century engravings depicting the peoples of the Russian empire, including Inuits from the far North and a Tartar khan with an elaborate turban. The bowls are from famed Russian porcelain manufacturer Gardener Factory. 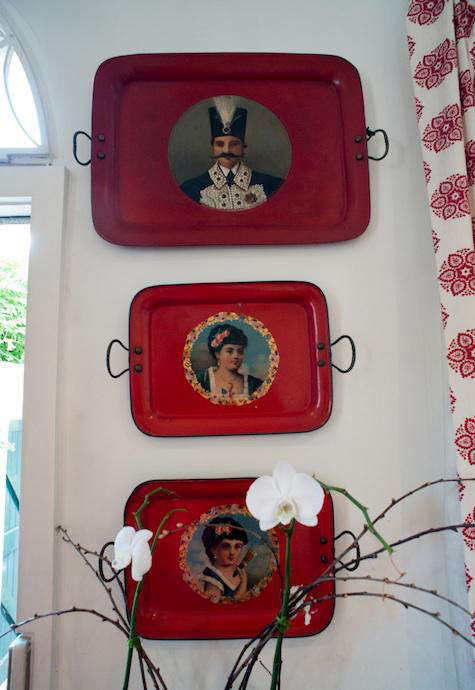 Above: Nineteenth-century Russian trays, made for the Persian market. 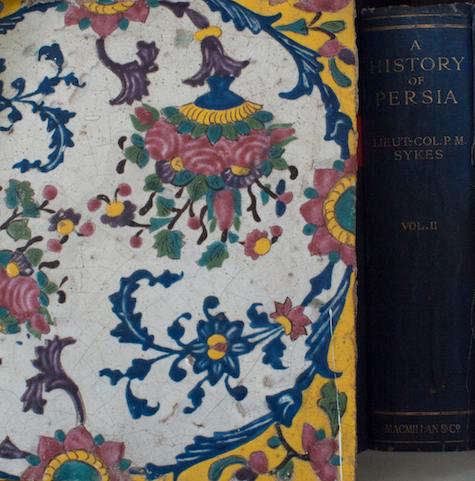 Above: An antique Persian tile sits next to The History of Persia by Sir Percy Sykes on the bookshelf in Farman-Farma's study.

Above: On the living room sofa, the cushions are covered in Fleur de Steppes and Natacha. An antique wooden shutter from Iran hangs next to an 18th-century Russian drawing. A collection of painted glasses from Moss in New York sit on a vintage Russian tray. 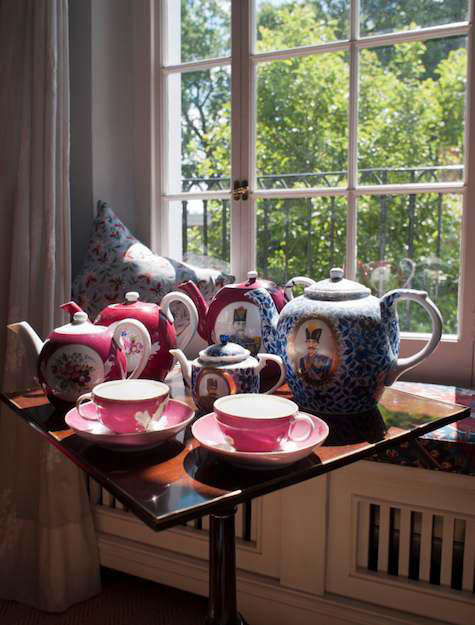 Above: Farman-Farma collects 19th-century teapots made in Russia for the Persian market. 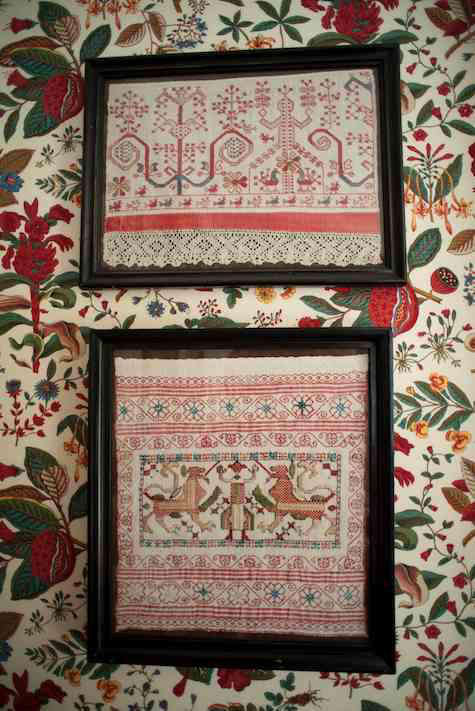 Above: Framed Russian embroideries hang on a wall that Farman-Farma covered with a vintage Brunschwig & Fils fabric.

Above: A Dutch painting of a pheasant hangs over the mantle. 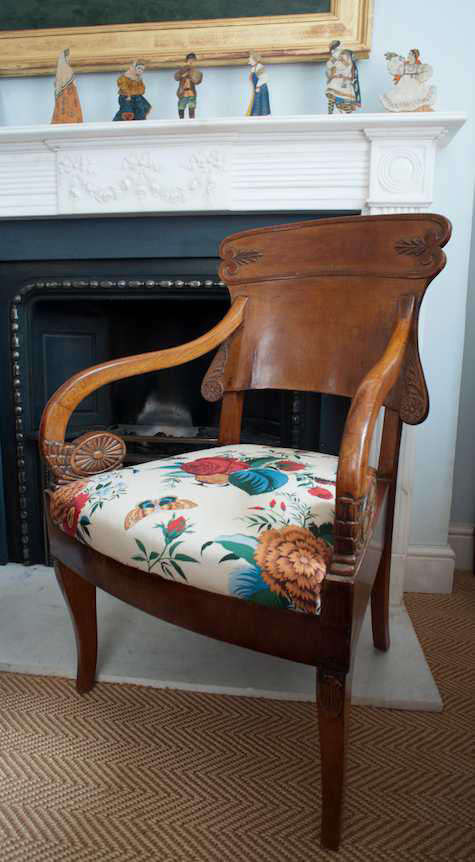 Above: An antique Russian armchair upholstered in Jar Ptitsa, which is Tissus Tartares' homage to early 20th-century Russian graphic art. A set of wooden Russian figurines dance on the mantel.