I first met David Ling, a new member of the Remodelista Architect and Designer Directory, in the cavernous, all-white New York offices of Richard Meier, the world-renowned architect whose cult-inducing abstract art and architecture inspired many aspiring architects from all over to come and train. No matter how early I got to work (part of the cult ethos), David was always there before me, hunched over a set of drawings, completely absorbed, poring over every detail. The drawings spoke to him like words on a page and he couldn’t seem to get enough of them.

Describing himself as “nurtured in the United States, formed in Europe, with an everlasting umbilical cord attached to China,” the multicultural Ling moved on in 1992 and opened his own practice David Ling Architects in New York. Citing influences from his unusual background along with art and nature, the New York-based, German-trained architect (his clients include Tina Brown and Alberta Ferretti) views everything in life as an opportunity for creative thought. A recent tour of his 2,500-square-foot live/work loft in a 19th century building near Gramercy Park is a testament to his particular Zen-like view of perfection–not an end goal in itself, but rather a mere and often fleeting byproduct of the poetry he worships in the process of design itself. “When I bought the building in 2000, it was just raw; someone had started to put in two bathrooms to sell it,” he says. “I arrested construction and opened up the space; I still tinker with it constantly.”

Come and see what he’s doing. 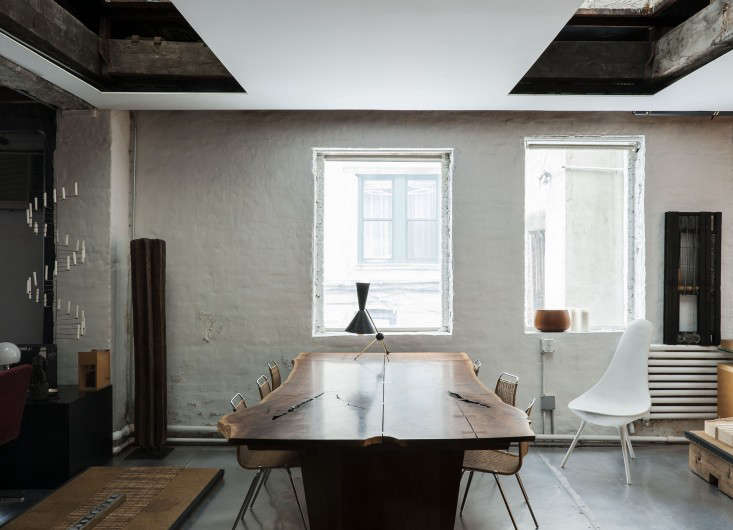 Above: The dining area serves as the dividing line between Ling’s office at the front of the loft and his living area and bedroom at the back. The ceiling openings were inspired by James Turrell’s light pieces. “I had the contractor cut the apertures in the form of a knife edge, minimizing the thickness of the sheetrock and creating the impression of a paper thin plane,” he says. The sheetrock ceiling is hung from the building’s existing heavy timber structure with standard light gauge metal framing. The dining table by Mira Nakashima is made from live-edge American black walnut and the white chair is a prototype that Ling developed. 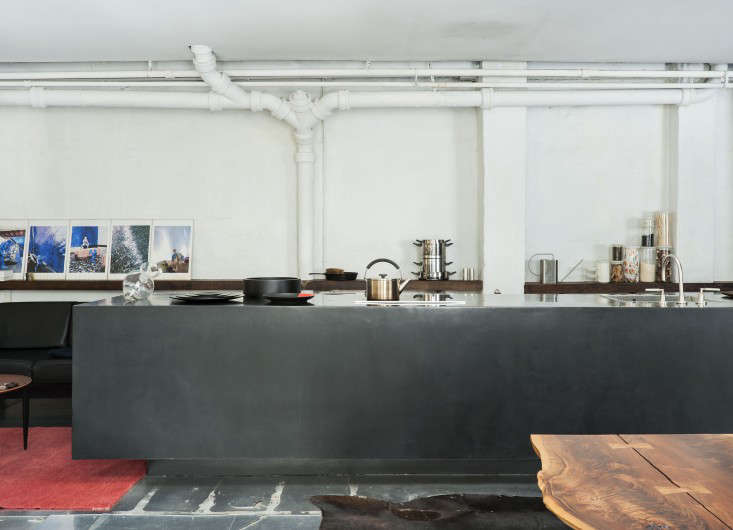 Above: The kitchen area is defined by an 18 foot long counter of hand troweled, custom colored black cement, which has an inset stainless sink and Dornbracht faucet with a platinum finish. “I like the idea that low-brow cement and high-brow platinum can co-exist,” he says. A shelf runs along the wall for the length of the space supplying convenient and accessible open storage. On the floor Ling installed 4-foot by 8-foot mirrored acrylic sheets purchased from an industrial supply store on Canal Street. As the material cracks, he patches it in with more acrylic in shapes sized to fit–”automatic art in my silver pad,” he says. 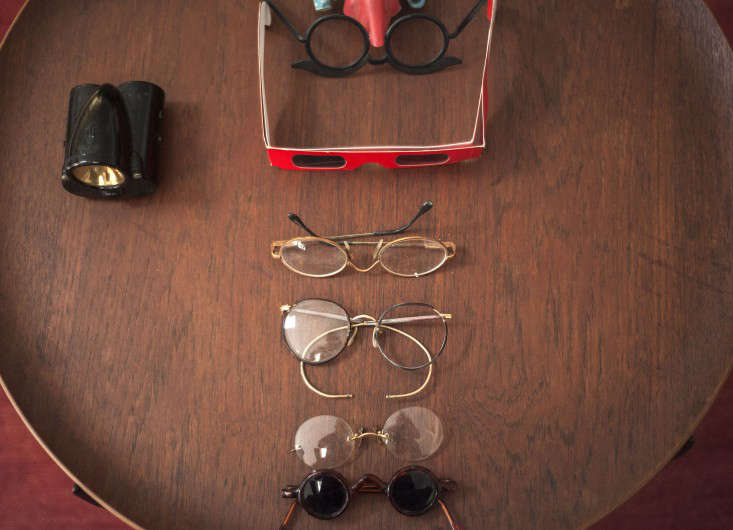 Above: Ling explains his spectacles collections this way: “My world is very visual, and I enjoy collecting instruments that help me see near (vintage glasses on the table) and far (binoculars). Some of the finest optics were made in Germany–hand-ground glass lenses.” 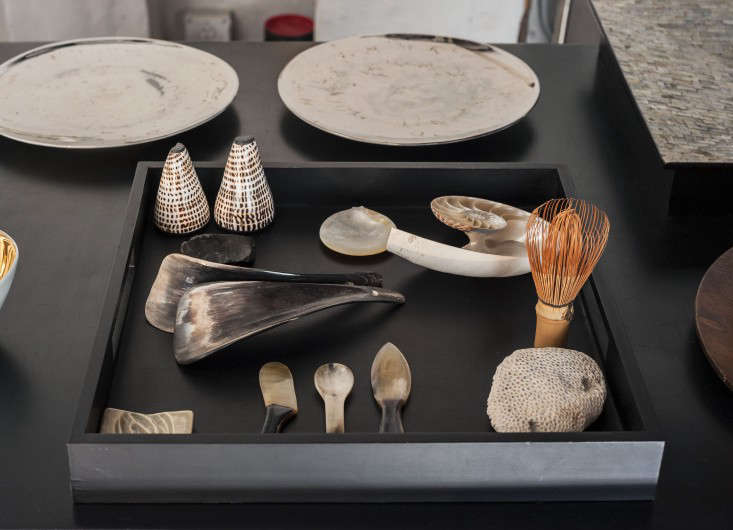 Above: Much of Ling’s work is inspired by natural forms that are found in organic materials. A collection of his favorite objects includes shells and coral that he collected while teaching in the Dominican Republic, horn shoehorns made in Haiti, and a tea whisk from a trip to Kyoto. 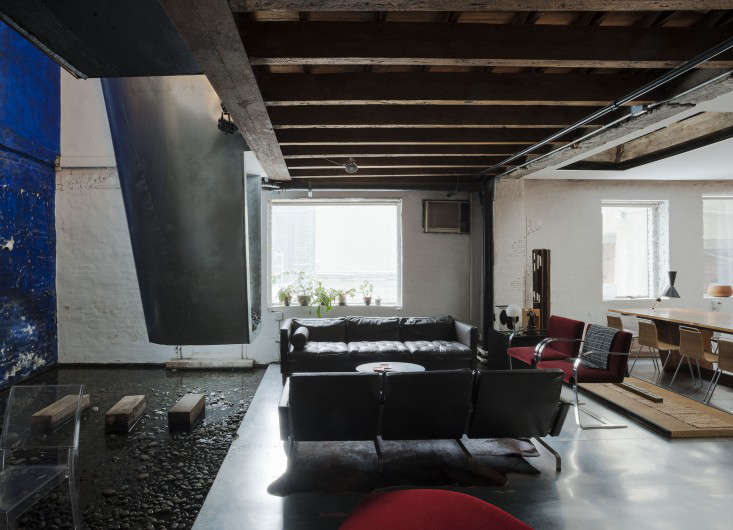 Above: Ling’s living area faces a moat and a waterfall that cascades from the loft above in a sheet of water (when it’s  turned on). The moat is sealed with a pool liner and filled with river rocks. To get to the metal stairs that lead to his bedroom loft, Ling walks across the water on “stepping stones” made from leftover shoring posts that were in the building when he purchased it. The living area is a repository of Ling’s European modernist furniture collection and includes a Poul Kjaerholm pk31:3-seater sofa, a pair of Mies van der Rohe Brno Flat Bar Chairs, an Otto Kolb Table Lamp, and the Bauhaus Table Lamp by Carl J. Jucker and Wilhelm Wagenfeld. 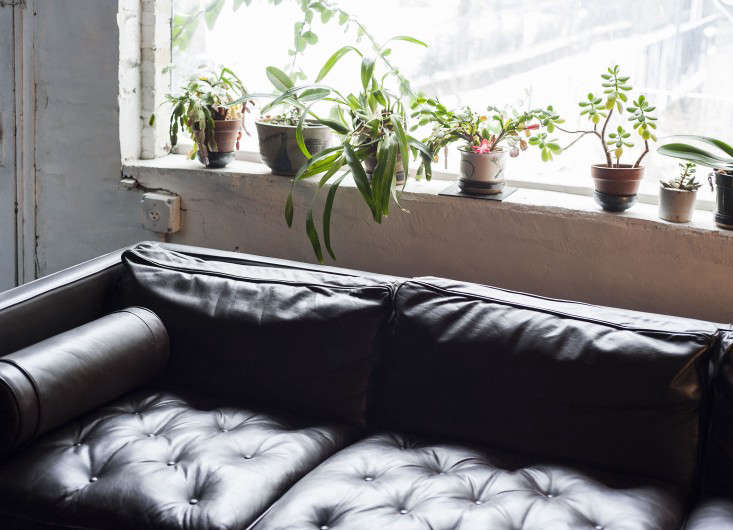 Above: A row of potted greens add an organic touch to the black leather Mies van der Rohe sofa. 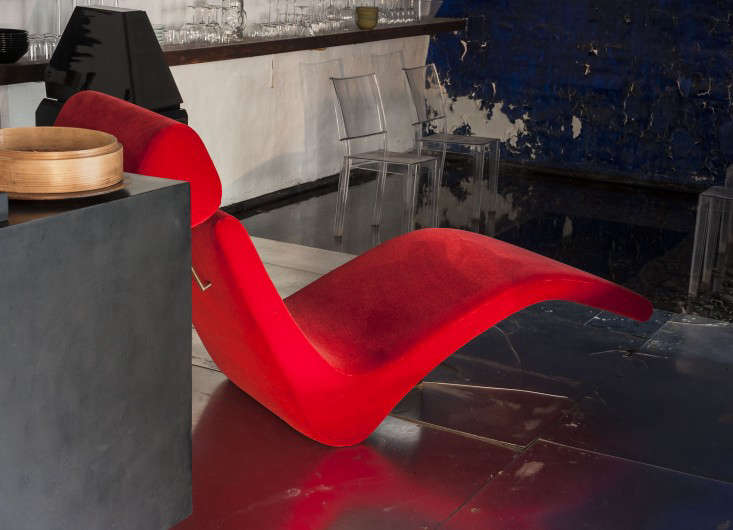 Above: The Reclining Nude chaise is a Ling design that won the Future Furnitue Award from Interior Design Magazine in 2003. 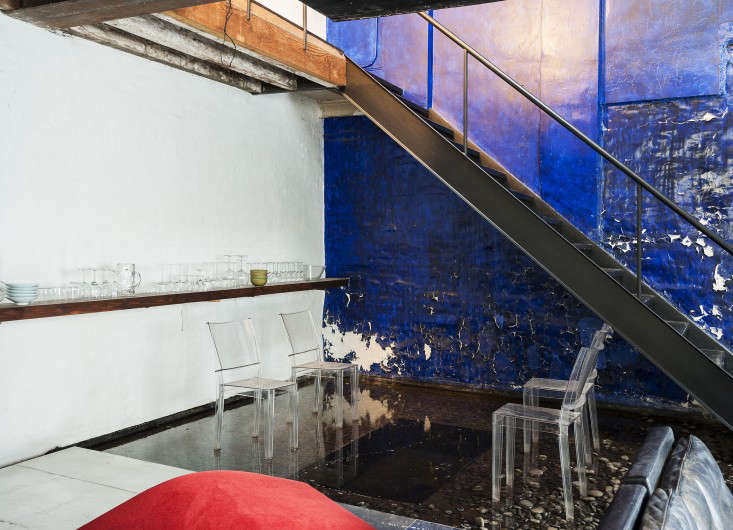 Above: Louis Ghost Chairs by Philippe Starck form a seating area around a “negative table” (a pit that was part of the existing buildling) in the moat. The industrial steel stair, to which Ling added the custom steel railing, leads to the bedroom. Water from rain and snow is occasionally trapped in the gap between the party walls (behind the blue wall), which causes the paint to peel. “I kind of like the patina it creates,” Ling says. 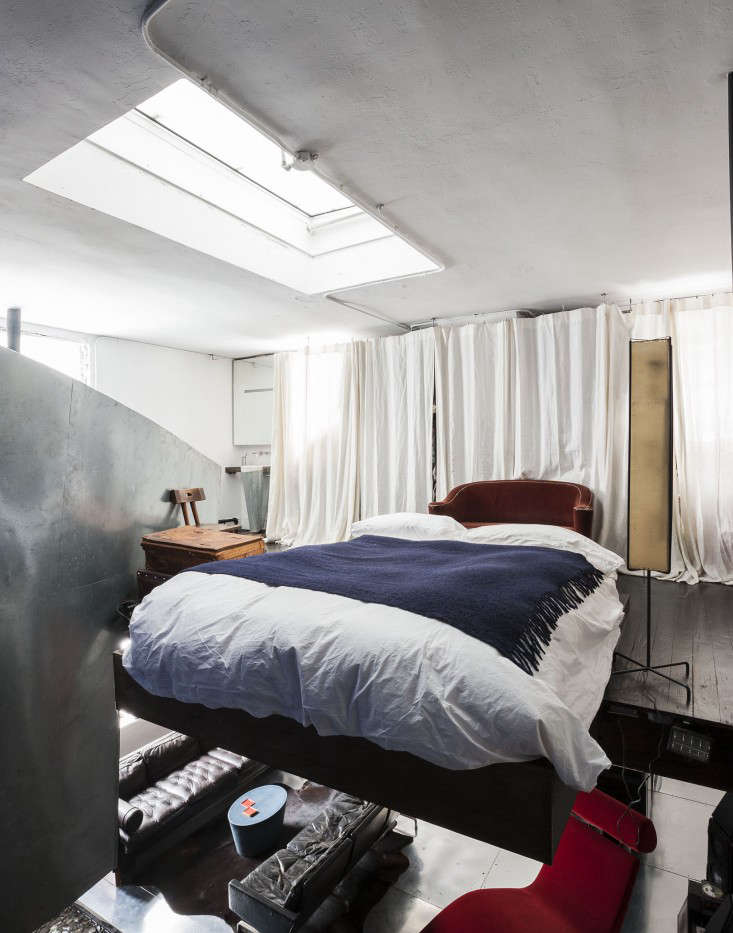 Above: In a loft filled with surprises, the tiny second floor is perhaps the most astonishing: Ling opened up what had been an enclosed sculpture studio, and built out a platform for his mattress, so that he literally sleeps on the edge of a precipice. “I like the feeling of being in a nest,” he says. The bedroom level is just big enough for his futon and an open bathroom area. Linen curtains hang from an Ikea Dignitet Stainless Steel Curtain Wire, masking a window ledge that serve as Ling’s ad-hoc storage shelf. For another look at the curtain wire, see Vanessa Bruno’s Loft in Paris. 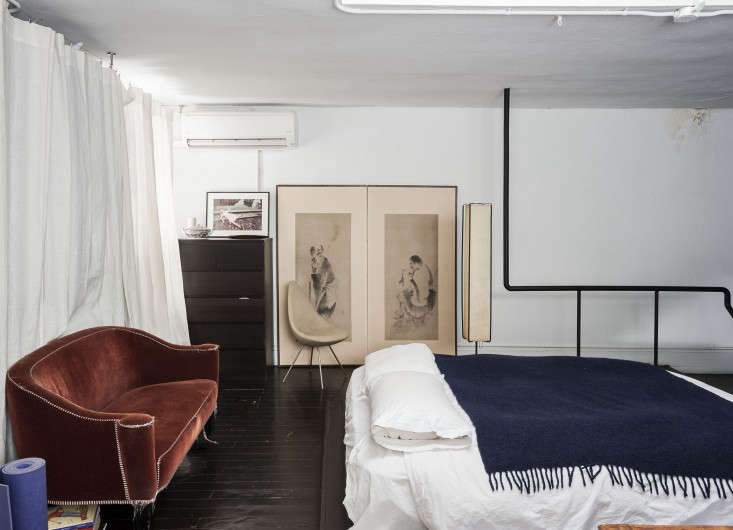 Above: A Josef Hoffman Haus Koller 3 Seat Sofa and pair of 17th century copies of earlier Zen ink wash paintings illustrate the mingling of Ling’s European and Chinese influences. Instead of attaching the stair railing to the floor, he had the steel tube welded to the ceiling. “I thought, wait, why attach the railings to the floor all the time–why not the ceiling for a change?,” he says. “It makes for a more dynamic composition.” 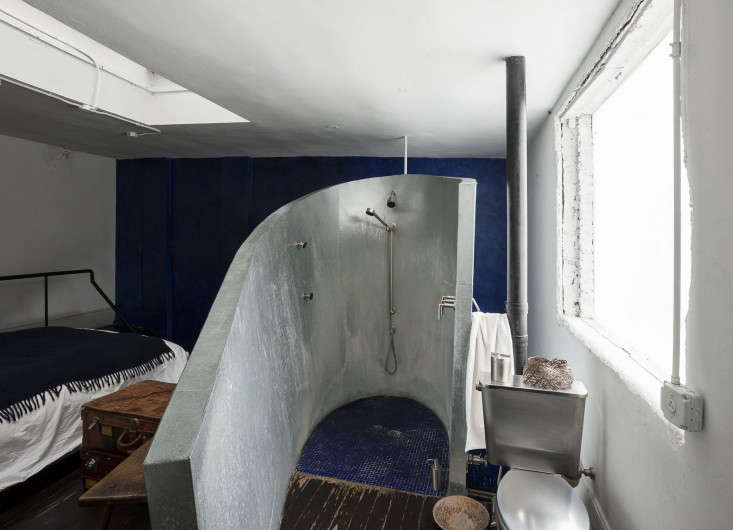 Above: A calla lily-shaped wall of galvanized metal forms Ling’s bedside shower. Inspired by Giacometti’s surrealist sculpture “Palace at 4 am” and Richard Serra’s work, the construction extends down to the living area where it forms a platform that has become Mae Mae the cat’s throne. A stainless steel prison toilet completes the bathroom suite. Ling isn’t the only designer intrigued by prison accessories; have a look at Design Sleuth: Toilet Roll Holders Inspired by Prison Design. 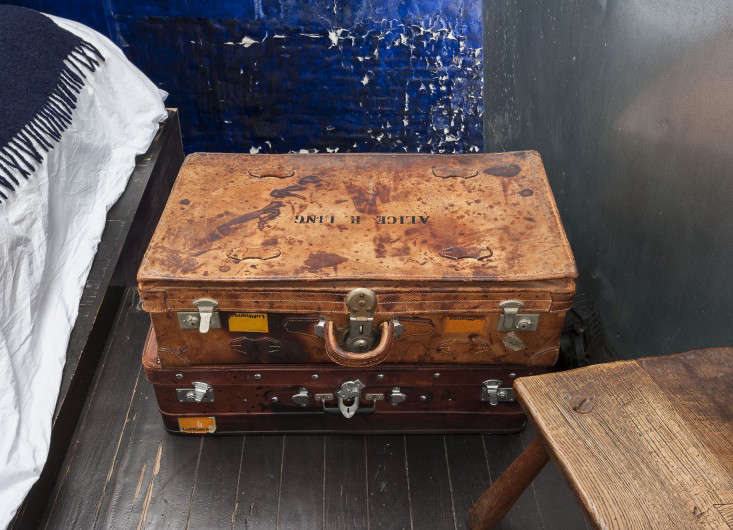 Above: The monogrammed leather suitcases that Ling’s mother carried when she emigrated from Hong Kong to New Jersey in the 1950’s sit by Ling’s bed. 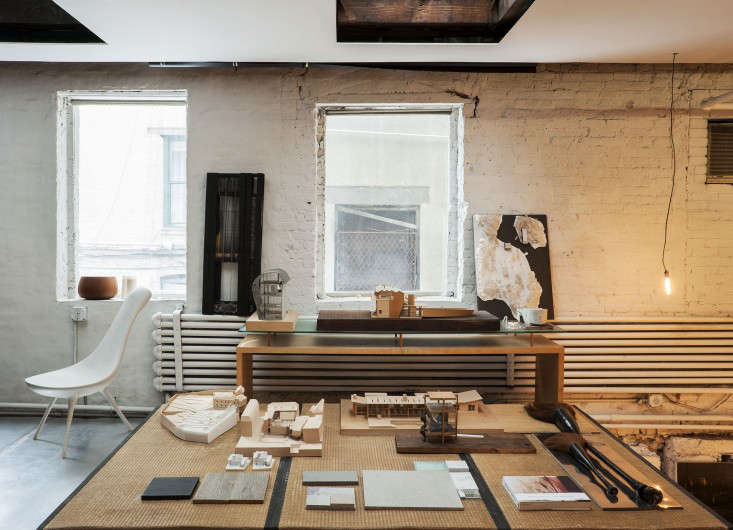 Above: Just beyond his office on the first floor, Ling displays architectural models, building material samples, and outsized Chinese calligraphy brushes on a table that he fashioned from tatami mats set on shoring posts. “This was my first furniture here,” he says. “I used to be a minimalist.” 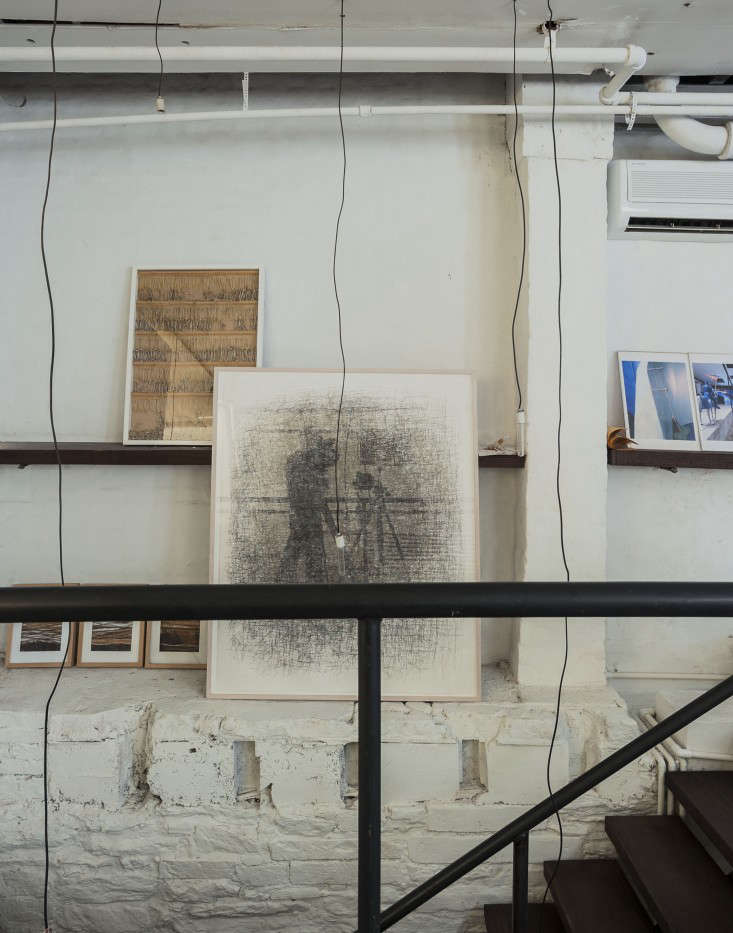 Above: Well before bare bulb lights became all the rage, Ling installed junction boxes in the ceiling and hung Satco Incandescent Tubular Bulbs on socketed wires. His homemade fixtures–”about 30 cents each”–hang in the stairwell that leads down to a library. The large ballpoint pen drawing is by Dan Miller, an artist represented by Creative Growth, an art center in Oakland, CA, representing people with disabilities. 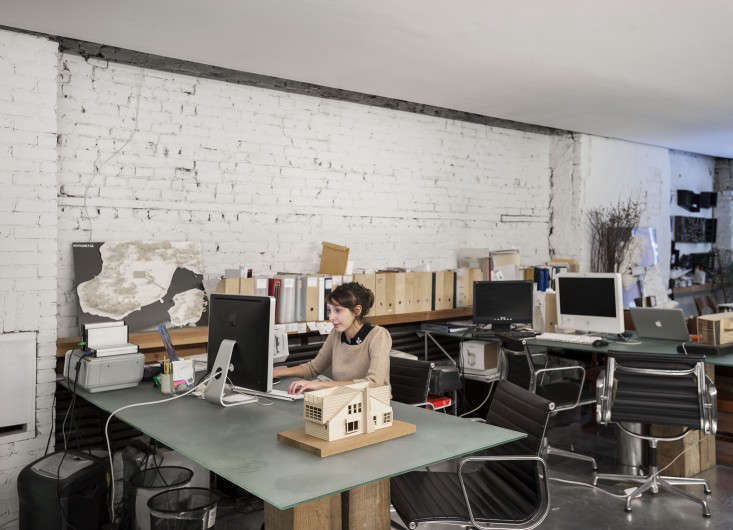 Above: Ling fashioned the desks in his office from salvaged materials. The 5/8-inch acid-etched tempered glass tabletops–remnants from a museum installation he designed–are slotted into wall shelves made from fir beams and supported at the end by shoring posts, scrap materials he found in the building. 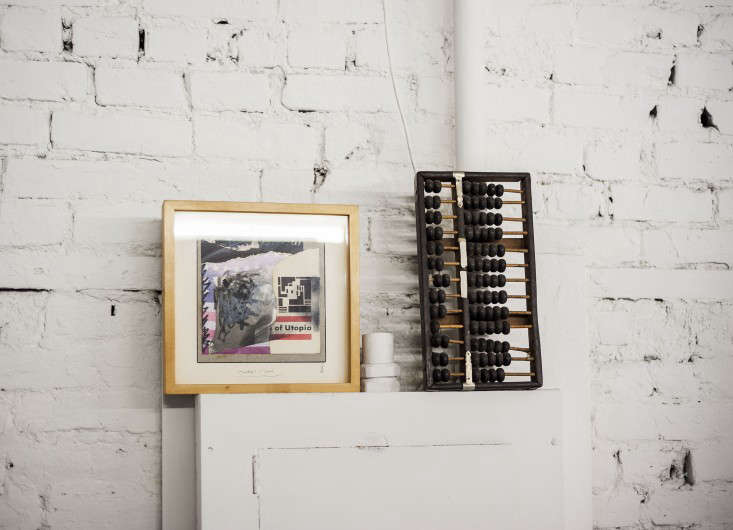 Above: Ling pairs a collage by our former employer Richard Meier with an abacus. “I worked with Richard for six years as an associate and during that time I assisted him with assembling the collages, which was great fun and a privilege,” he says. “The abacus belonged to my dad, a theoretical physicist who taught me how to use it when I was a child. He always had it within arm’s reach and it reminds me of him and his devotion to math.” 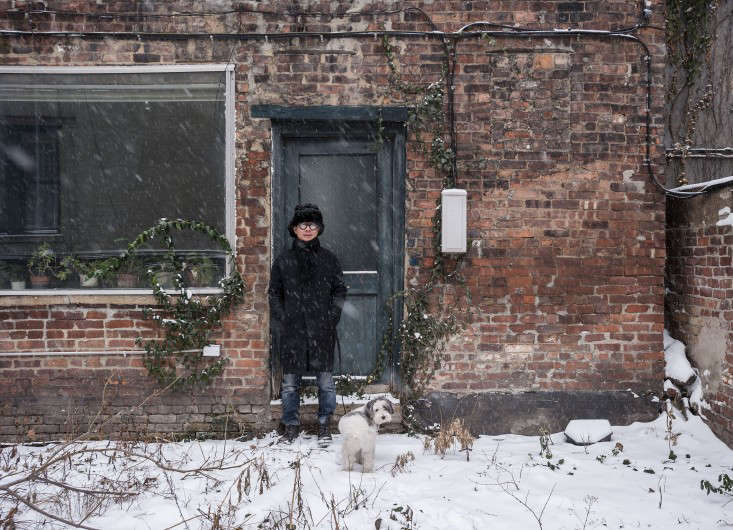 Above: The architect stands with his rescue dog, George, in the back of his 1880s building, originally a dental factory.

Above: Watch David Ling move through his space and describe how it came to be; via Dwell. 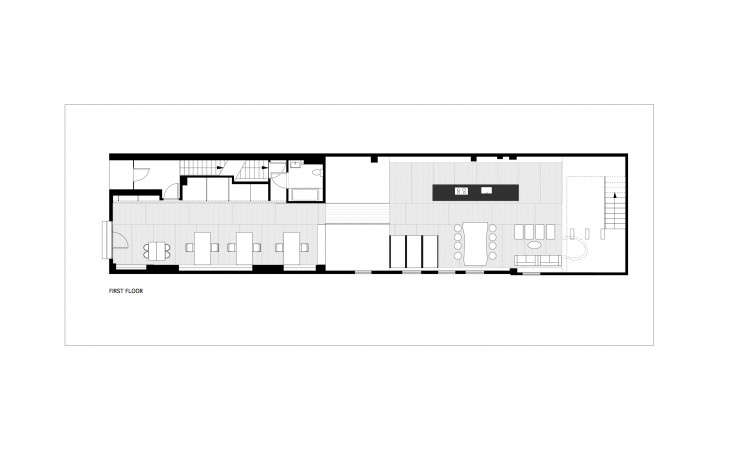 Above: A plan of the first floor of Ling’s live/work space shows the office area in the front and the living area in the rear. The two spaces are separated by what Ling refers to as the “drawbridge,” a walkway that overlooks the library. 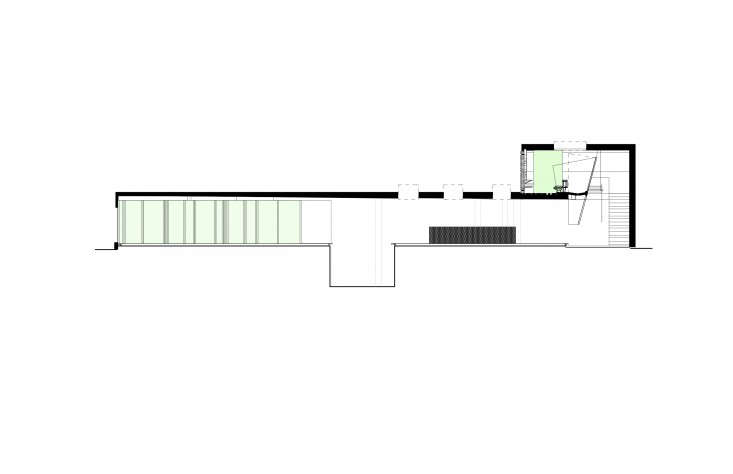 Above: A longitudinal section cuts through the length of the space.

Much of the character in David Ling’s live/work studio comes from his homemade projects. To get started on creating your own look, see our DIY posts A Bed Made From Reclaimed Wood and the George Nakashima Rope Chair. Dreaming of loft living? Browse our photo gallery of inspired loft spaces.

At Home with a Beijing Furniture Designer

Steal This Look: A Compact Multi-Color Kitchen in London