Gallery owner Lisa Overduin and her partner, artist Paul Sietsema, live with their son, Ellsworth, in the El Royale, a 1929 Spanish Colonial building designed by William Douglas Lee, the architect of the Chateau Marmont. Overduin, who is Dutch Indonesian, grew up in The Hague, and describes her childhood there as “extremely formative aesthetically. Everything in the environment was a window into another time and history. Much of the furniture I grew up with came from my father’s family and represented different periods in Dutch furniture design.” Her mother collected Indonesian textiles from her hometown of Jakarta along with Dutch pewter, silver, and porcelain.

Her early design influences have informed the couple’s personality-filled LA apartment, where the decor has evolved over time. The apartment, which we spotted on designer Jenni Kayne’s site Rip & Tan, is outfitted with lighting and antiques that Overduin found in small shops or at auctions across Europe as well as artwork from her gallery, Overduin & Co., on Sunset Boulevard. Here’s a look inside the El Royale apartment; for more on Lisa Overduin, read her Q&A on Rip & Tan.

Above: Overduin painted the apartment in a shade of off-white the building staff called “El Royale cream,” the original color of the building walls from the 1920s. A Globe Floor Lamp designed by Paul Meyen for Habitat in the 1970s illuminates a corner. The rug was “bought very cheaply at a small auction in Europe” and the painting is by London-based artist Merlin Carpenter from a show he did at Overduin’s gallery years ago.

Above: The couple bought the 1960s Cippolini Marble Table by Poul Kjaerholm for E. Kold Christensen at an auction in Sweden while they were visiting family. A row of African stools serve as plant stands under the window and a 1940s Jacques Adnet side chair sits in the corner (“I like the balance of Deco and straightforward industrial form in some of his designs,” Overduin says). 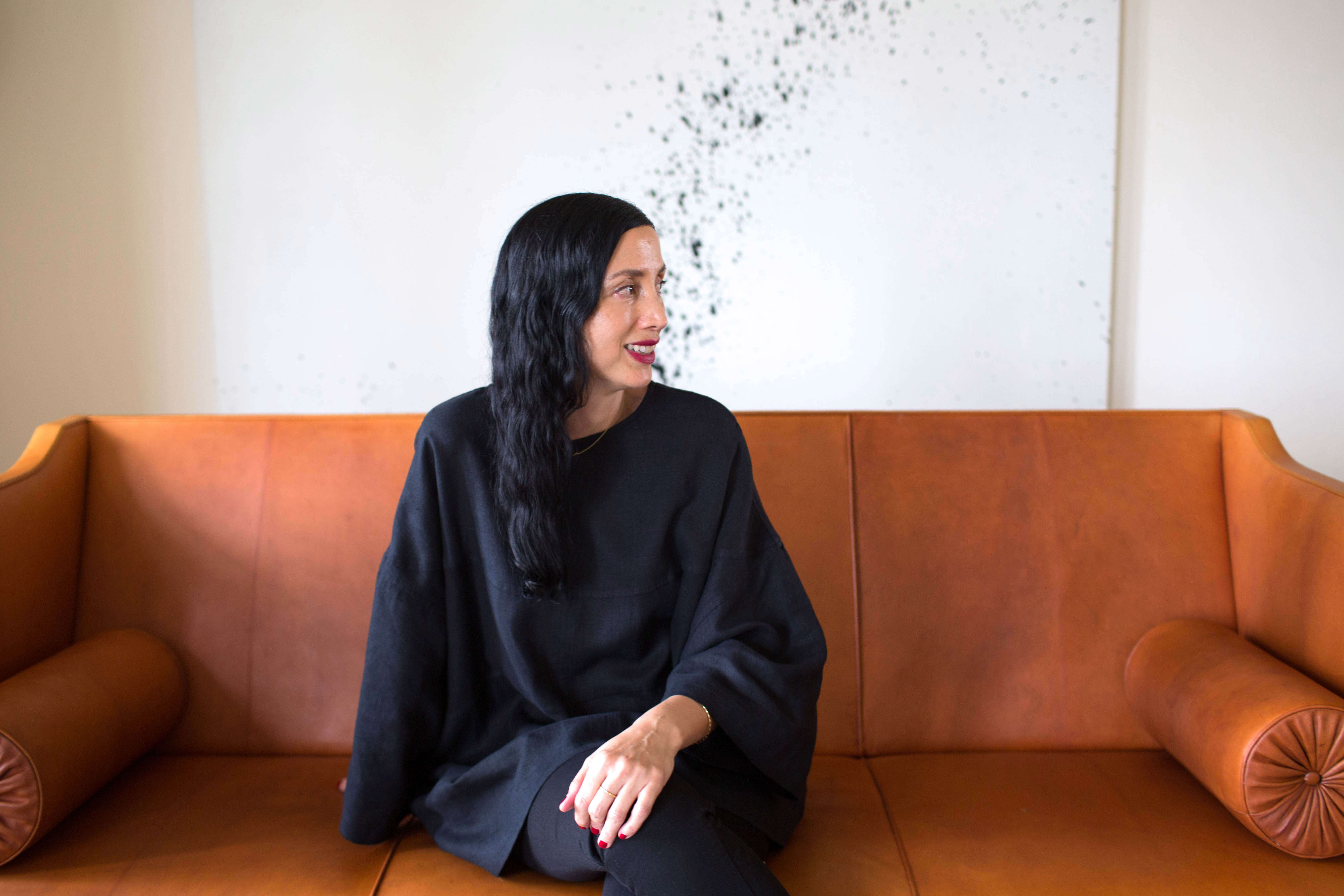 Above: Overduin and Sietsema tracked down the original Kaare Klint sofa after admiring it in a book about Klint’s furniture.  Sietsema worked directly with Klint’s granddaughter to have the original cylindrical pillows for the sofa re-created from photographs. Overduin is wearing a linen tunic from Los Angeles–based designer 69 (named after designer A. Halford’s astrological sign, Cancer). 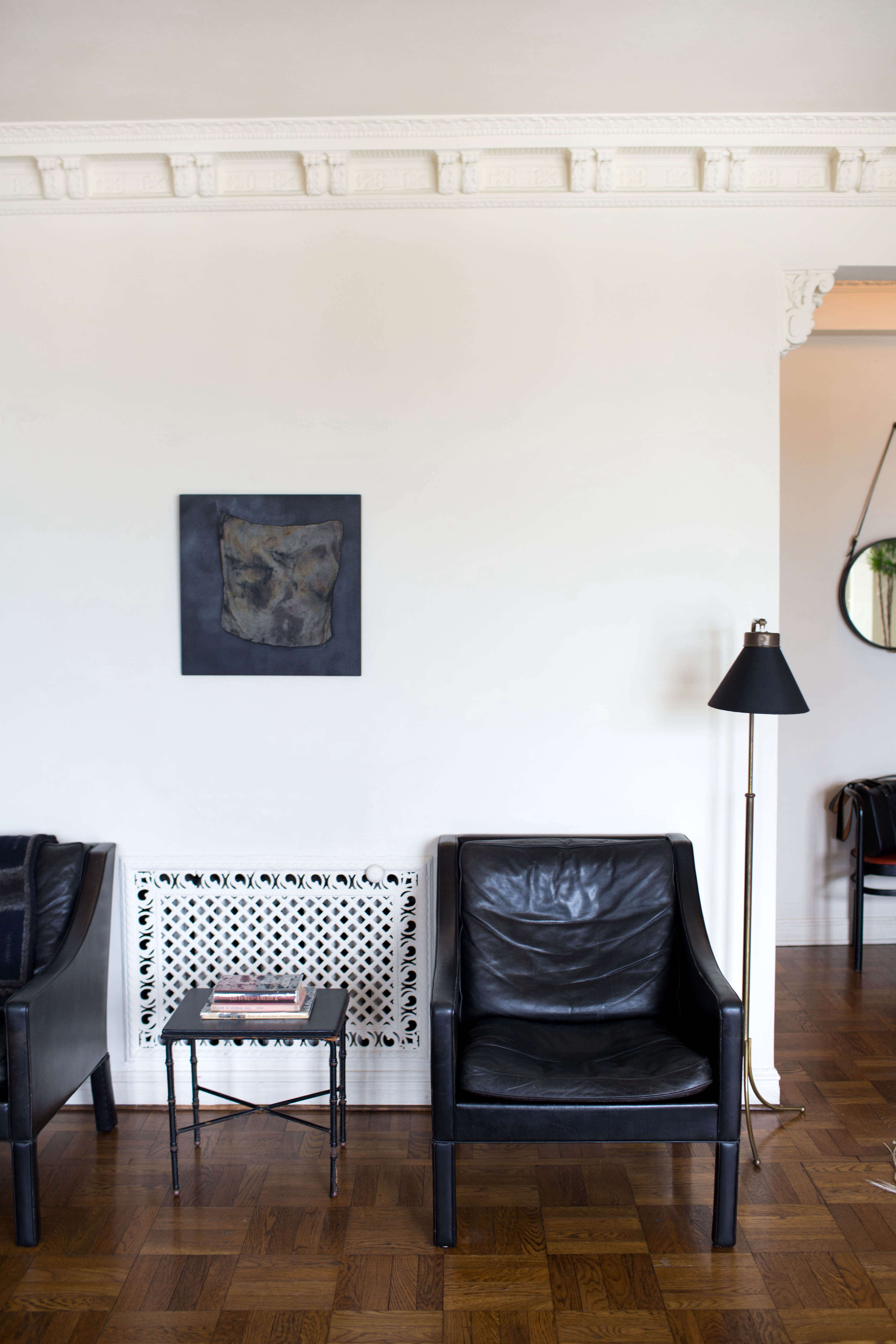 Above: An artwork by Swiss artist Daniel Spoerri from the 1970s hangs above a pair of Børge Mogensen 2207 Arm Chairs. 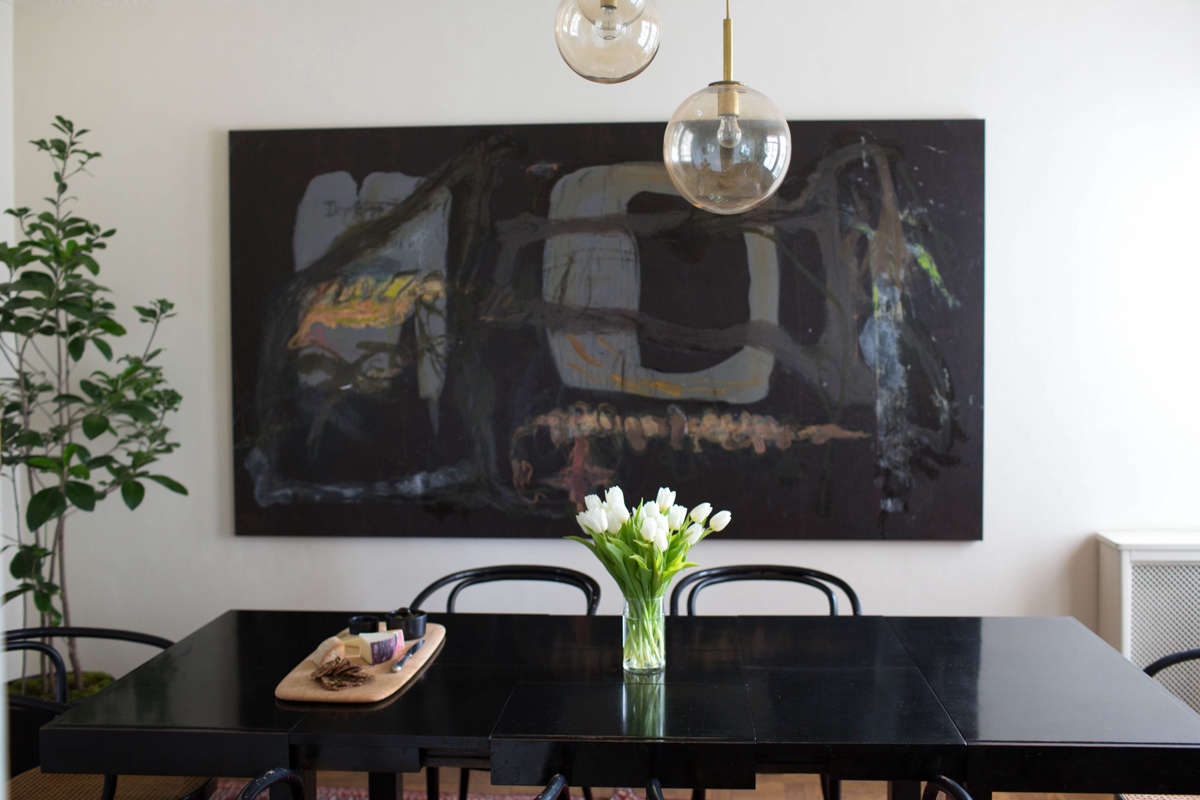 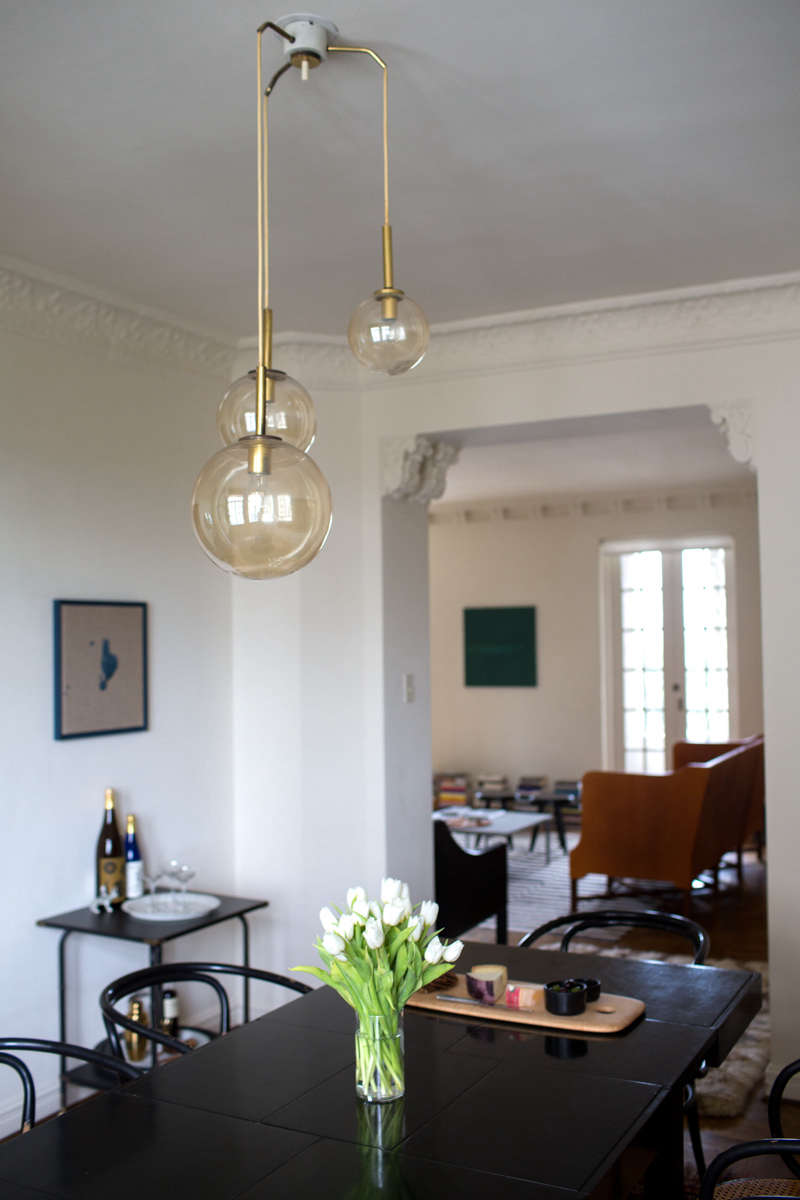 Above: When Overduin moved into the apartment, she replaced all the light fixtures: “I like mixing periods and I love the resonance between 1970s and 1920s design,” she says. A 1970s Czech light fixture from Overduin and Sietsema’s 19th-century apartment in Berlin hovers above the dining table. 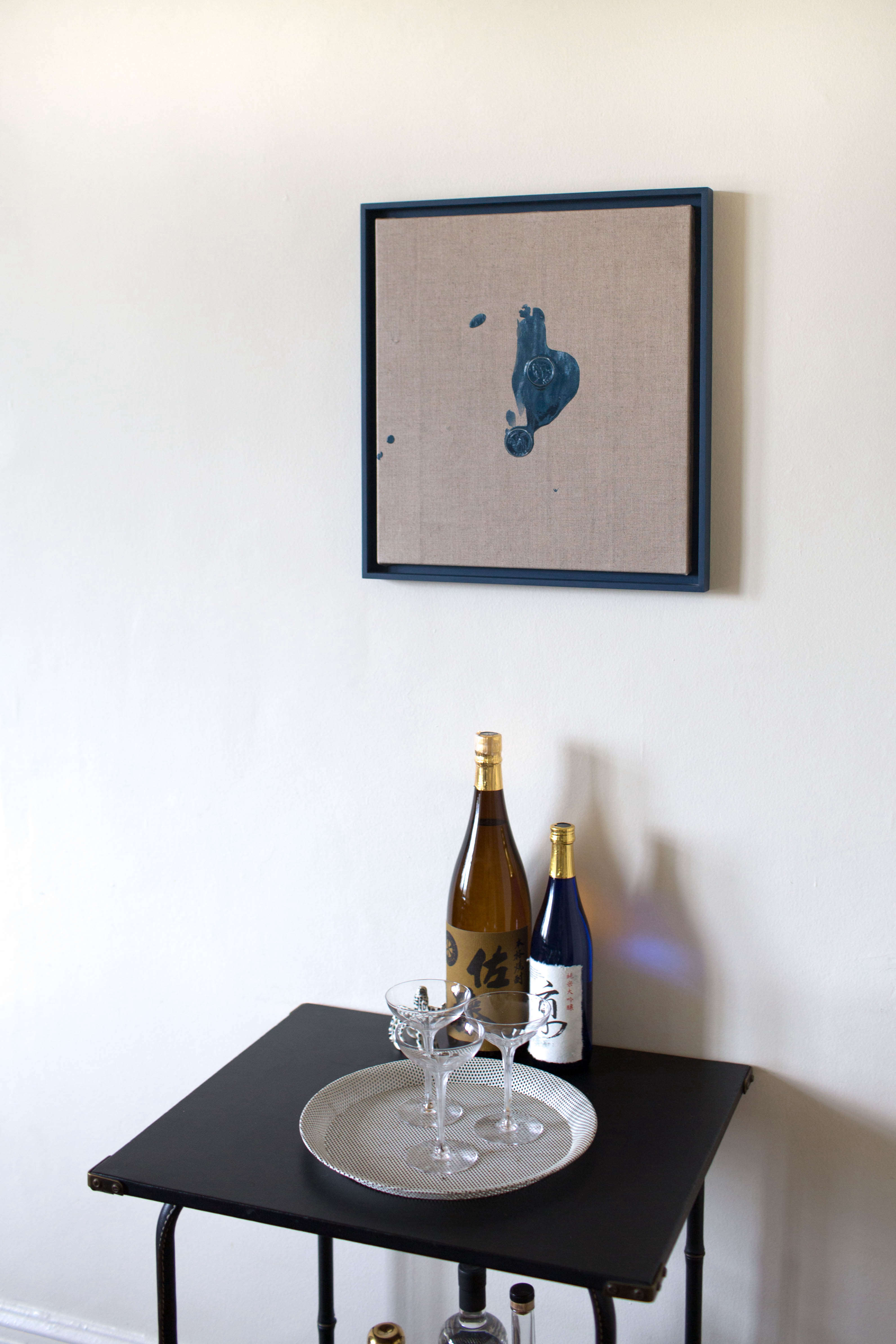 Above: A painting by Sietsema hangs above a Jacques Adnet Bar Cart. 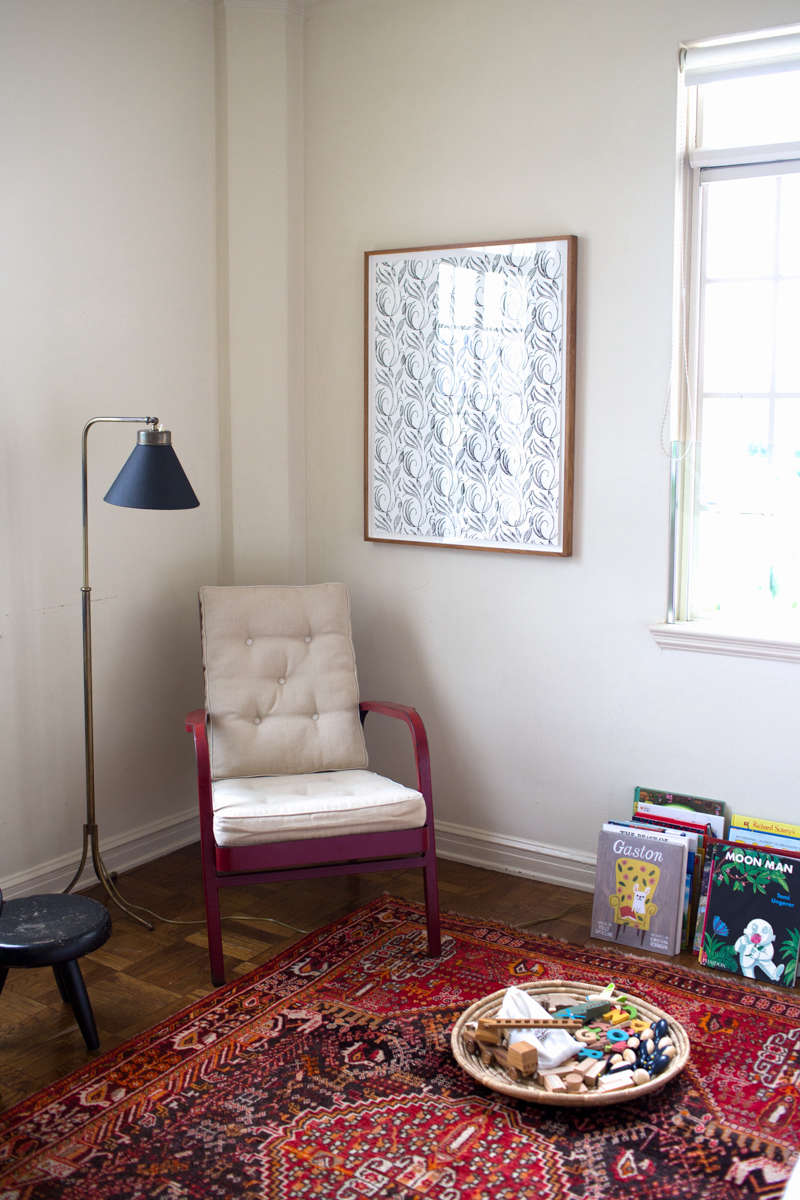 Above: Overduin and Sietsema had a hard time sourcing children’s furniture, so they used small scale pieces (a Jacques Adnet chair and a Charlotte Perriand stool) instead. 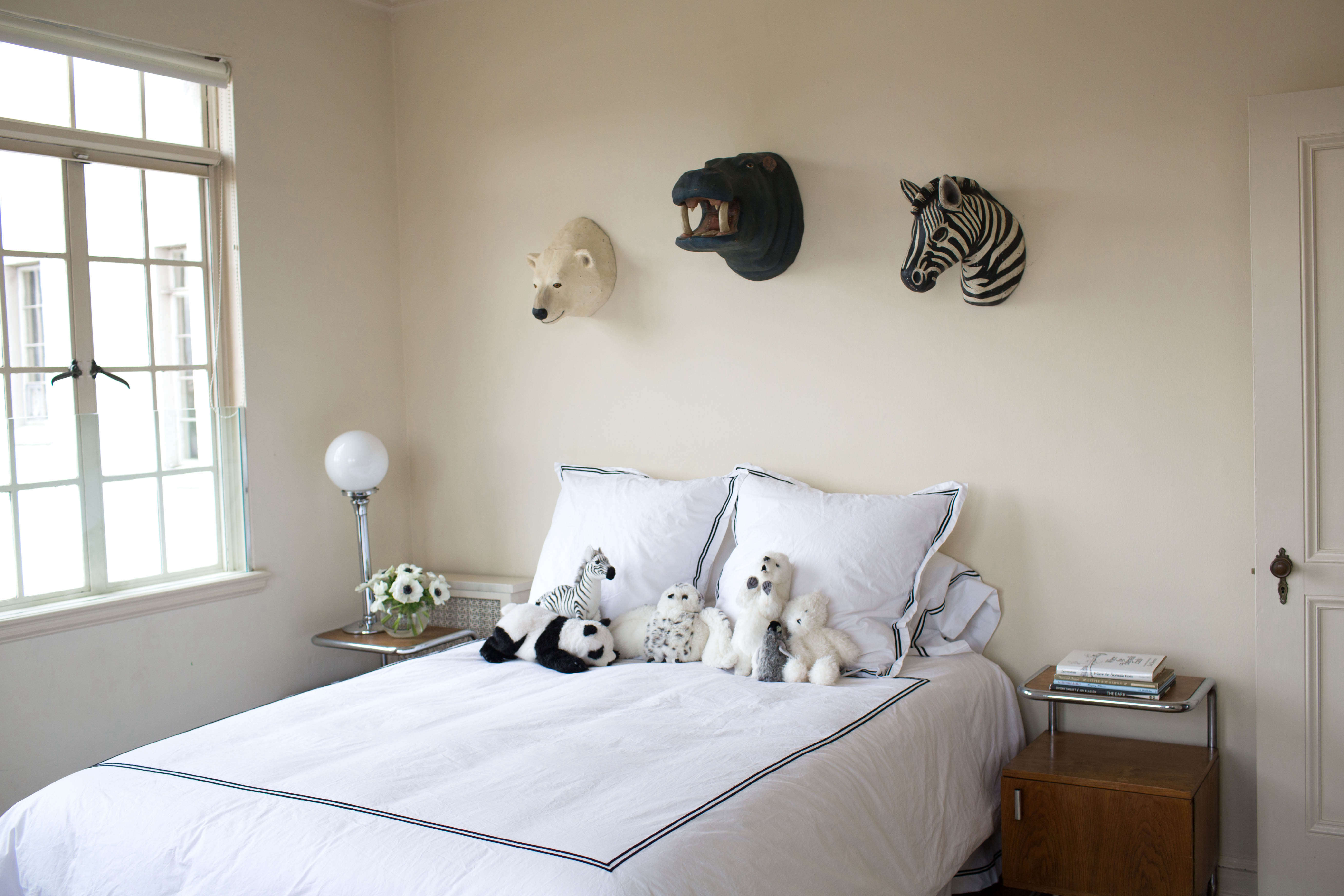 Above: A trio of animal heads in son Ellsworth’s bedroom. 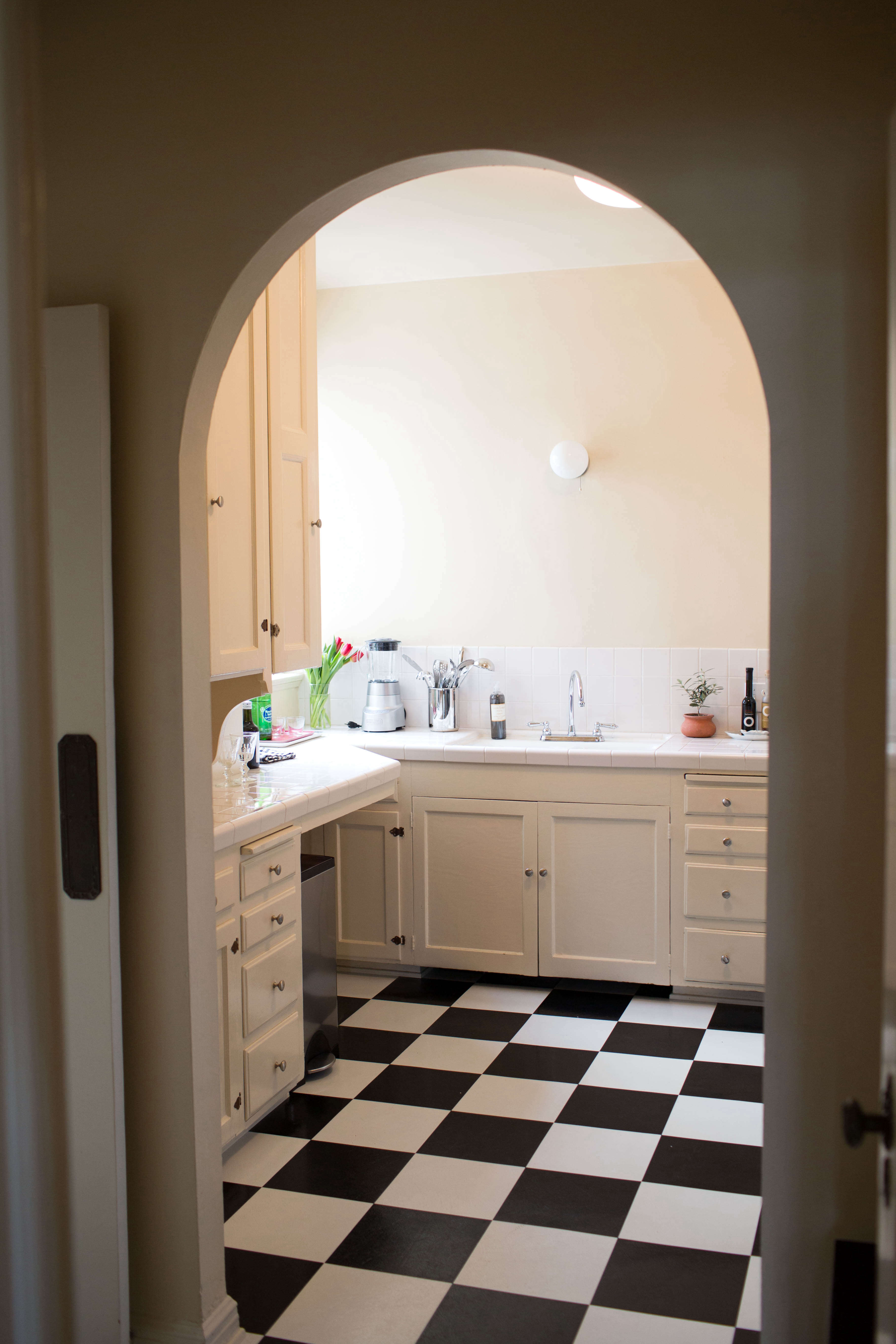 Above: Much of the original kitchen from 1929 remains; newer elements include the black-and-white floor tiles, sink fixtures, and the appliances. 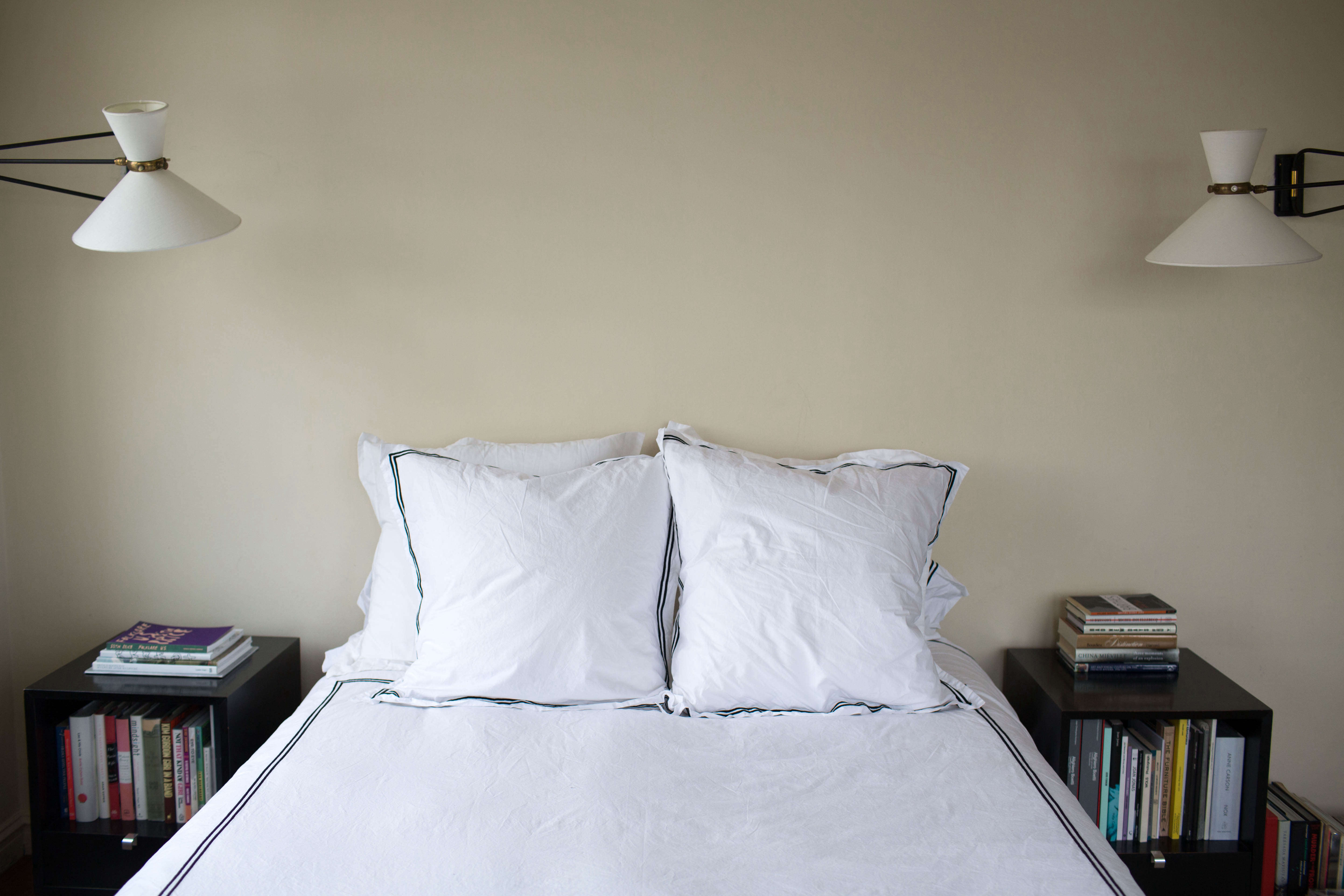 Above: In the master bedroom, bedside illumination is provided by a pair of 1950s Rene Mathieu Lamps the couple found in Paris (Overduin added custom Japanese silk shades). The Italian Cotton Bedding is from Rivolta Carmignani and the bedside tables are part of Overduin’s collection of George Nelson lacquered furniture.