Textile designer Eleanor Pritchard is proud to be carrying on an age-old weaving tradition in the UK. The stone mill in Carmarthenshire, Wales, that produces her blankets is 130 years old; it’s family owned and much of the crew only speaks Welsh (“Gweu means weaving,” she’s learned, “and gwudd means loom.”) Using a palette that veers from muted to eye popping–and takes inspiration from British midcentury artists, like Ben Nicholson and Eric Ravilious–Pritchard has been selling her blankets since she graduated from the Chelsea College of Art and Design in 2001 (a second college career for her). She operates out of a design studio in south London and of late has started designing upholstery fabric that’s woven of Shetland wool on the Isle of Bute in Scotland.

Pritchard’s ability to inject new life into dwindling industries–and her lovingly detailed results–have not gone unnoticed. When Prince Charles was furnishing Llwynywermod Estate, his grand farmhouse in Wales, Pritchard was commissioned to supply blankets. The National Trust mounted a series of her weavings in large panels in its new offices. And UK fashion doyenne Margaret Howell, one of our design heroes, offers an exclusive collection of Pritchard’s throws and pillows in her shops, which extend to Tokyo.  It turns out that geometric Welsh weavings in shades of gray, blue, and mustard look good just about anywhere.

Photographs via Eleanor Pritchard, unless noted. 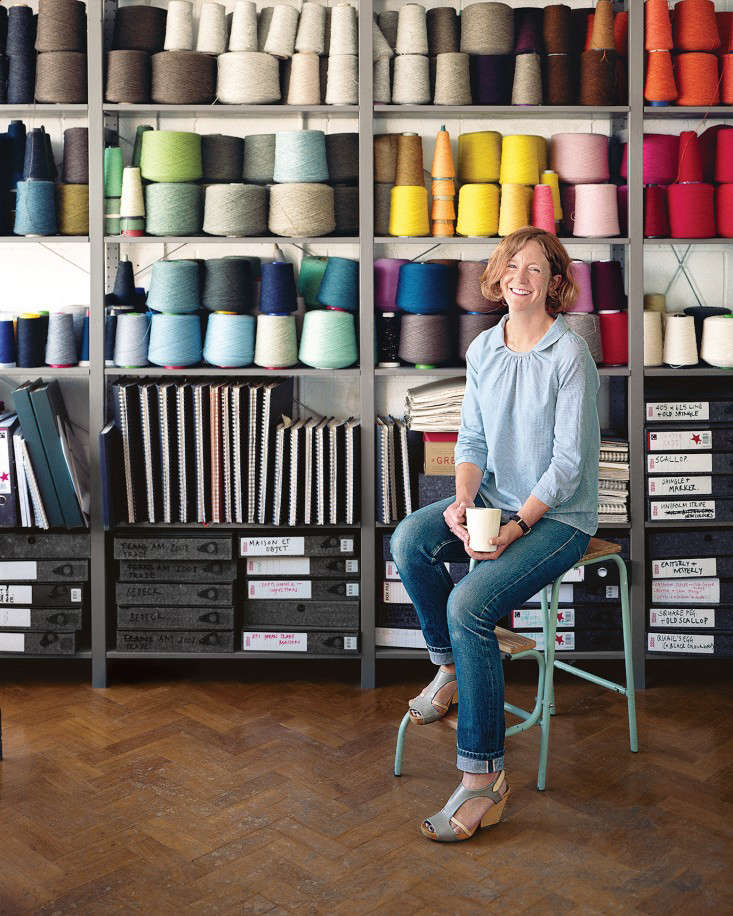 Above: Pritchard’s works out of Cockpit Arts, a converted gravel company headquarters in Deptford, in south London. (“Evidently it was a successful business as the studio has lovely parquet floors and lots of midcentury detailing ” says Pritchard.) Photograph by Christoffer Rudquist via Dwell. 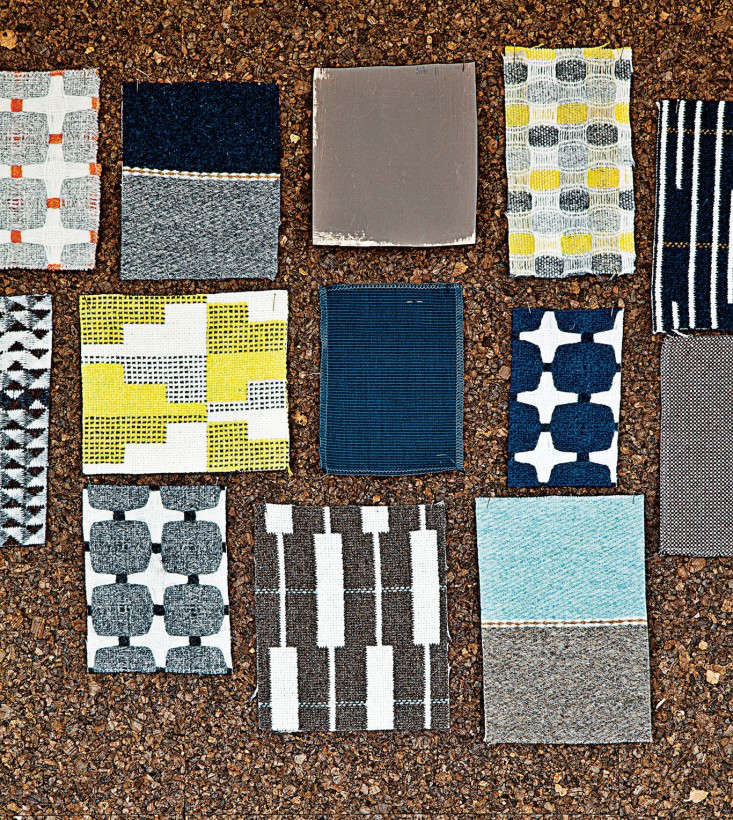 Above: Blanket and pillow pattern samples. “The fabrics we produce are all my own designs, but the weaving technique has been used for hundreds of years,” says Pritchard. “I really like the idea that I’m reinterpreting old vernacular traditions.” Photograph by Christoffer Rudquist via Dwell.

Above: Pritchard’s 625 Line, a reversible blanket design woven of 100 percent pure new Scottish wool, is made in several color ways. All of Pritchard’s blankets come in standard size (150 by 180 centimeters), £230, and long size (150 by 240 centimeters), £296, and work well as throw blankets. Pritchard’s work is available directly from her site, as well as from a number of retailers in the UK and around the world. In the US, Lekker Home carries the largest selection; the 625 Line Blanket is $399 in standard size. 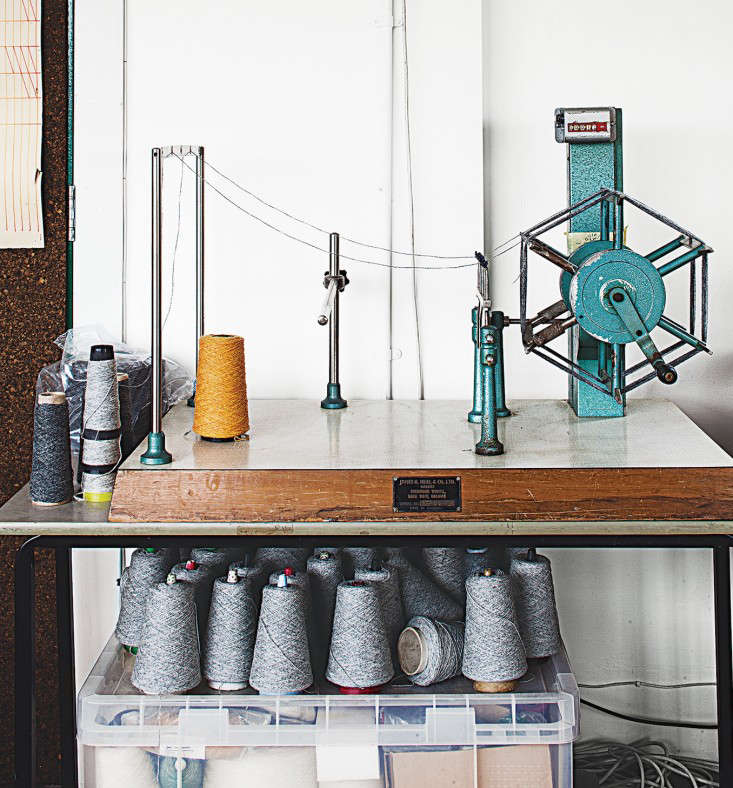 Above: A vintage hank winder in Pritchard’s studio is used to turn cones of yarn into hanks or skeins. Most of Pritchard’s blankets are woven in Wales and finished with blanket stitching in the London studio. Photograph by Christoffer Rudquist via Dwell.

Above: Pritchard’s Easterly blanket, a pattern she describes as “a woven study in weather mapping.” The Northerly blanket, the same pattern in gray, is available from Union Made in San Francisco for $426.

Above: Pritchard has applied her blanket patterns to a series of cushions backed with deep blue or flecked brown wool. Shown here, top to bottom, Easterly, 525 Line, and Quail’s Egg, £96 each.

Above: Pritchard samples all of her designs by weaving them on a vintage George Wood dobby loom in her studio. “George Dobby was a retired ship’s engineer. There are a number of his looms in the country–I got mine from a lovely Latvian woman who was downsizing her studio; owning one is a bit like belonging to a classic car club,” she says.

Above: For warmer weather, Pritchard has just introduced a small collection of softer, lighter-weight blankets made of lambswool woven in Lancashire. Shown here, geometric Quince (on top) and Peppercorn, which is navy on one side and pale silver-gray on the other. They measure 122 by 180 centimeters and are £240 each. 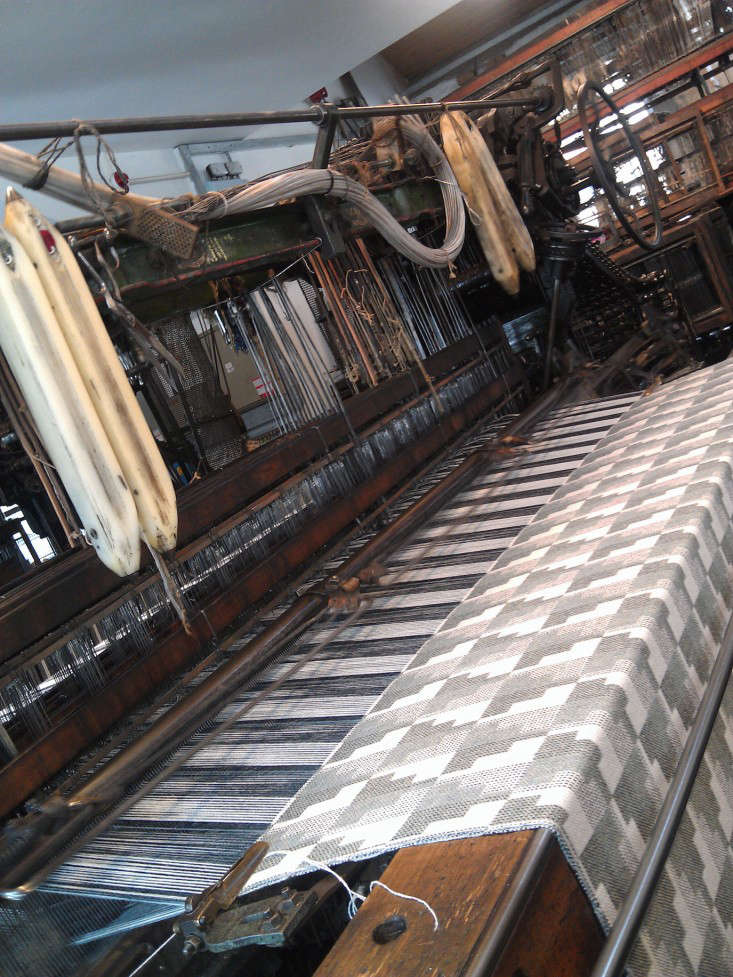 Above: Pritchard’s winter-weight blankets are woven in a 130 year old, family-owned mill in Carmarthenshire, Wales. “There’s a long tradition of Welsh tapestry weaving,” explains Pritchard. “It’s basically a double cloth in which you have two sets of warp threads and two sets of weft threads, and the fabric is woven as two separate but interlocking layers. The technique allows for a lot of graphic patterning and the back of the fabric is often the reverse image of the front.”

Above: Northerly and Signal cushions; £96 each

Above: Move over Eames–Pritchard has recently branched out into upholstery fabrics. Shown here are a sampling of her designs–nine patterns in three color ways are currently available. They’re woven on the Isle of Bute in Scotland of a blend of 92 percent new wool and 8 percent nylon for durability. See Eleanor Pritchard for more details and pricing.

If you like the look of Pritchard’s designs, browse more Blankets & Throws that we love, including these 5 Blankets Loomed in the USA and Nanne Kennedy’s Seacolors blankets from Maine. Getting ready for warm weather? Gardenista has you covered for picnic blankets.

DIY: An Industrial Wall Light for $15

Textile Spotlight: Fabrics Inspired by Sculpture and Sound by Nick Cave for Knoll

‘Snippets from Our Lives’: At Home with Toast’s Suzie de Rohan Willner