We’ve been following the rise of Krista Schrock and David John Dick of LA design firm DISC Interiors ever since their launch in 2012. The duo’s latest project is a 1928 Spanish Colonial Revival–style home in Silver Lake, located above the reservoir, designed by noted female architect of the era, Frankie Faulkner. When the owners, a young couple expecting their first child, bought the house, it had been through many poor remodels over the years. Although the bones of the building were good, it was in dire need of an overhaul.

When DISC Interiors was enlisted to do a full design of the house that included new layouts for the bathroom and kitchen, their inspiration, David John explains, “was a minimal Mediterranean home on the coast, that focused on materials, and texture, and a muted earthy color palette.” To that end they incorporated limestone, basalt stone, and white soapstone, mixing rustic and modern textures with vintage and custom upholstery.

Although some of the original iron elements were retained, such as in the staircase, others were minimized, such as the decorative iron in the windows. David John is quick to note that “We are never purist in our design—we are influenced by so many eras and places—nor do we aim to replicate what has been done but usually look at interior architecture and design in how the rooms are able to interact with the light, volume, and balance of materials.” The result in this case is a light-filled home with a mix of materials that achieved the clients’ desire for a space that will quietly age and patina over time. 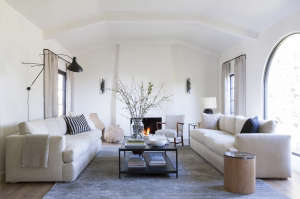 Above: The living room features custom DISC upholstery with a Casamidy iron and leather coffee table in the center. A Bernard Schottlander black wall sconce from the Mantis collection hangs over the sofa, while two Lawson-Fenning Rolled Perforated Sconces flank the fireplace. 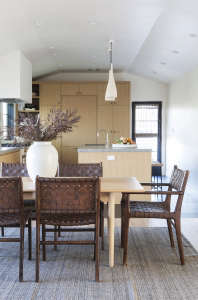 Above: The remodel involved squaring out doorways and, in this case, removing a large wall in the dining room to open up the space into the kitchen. 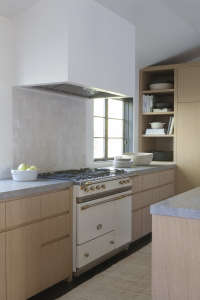 Above: The newly configured kitchen features limestone countertops with a Moroccan tile backsplash above the Lacanche range and a plastered hood. Custom white oak was used for the cabinetry. 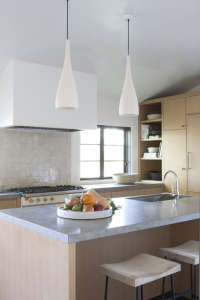 Above: Two white porcelain pendants by Belgian artist Jos Devriendt hang above the kitchen island. Inspired by a recent visit to the Ghent offices of hardware maker Peter van Cronenburg, David John was so impressed with the craftsmanship and attention to detail that he used the line for the kitchen hardware and later for the front door. 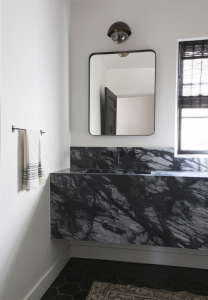 Above: The powder room features a slab of white soapstone with an integrated sink and is paired with black faucets. The sconce above the Restoration Hardware mirror is by Allied Maker. The black woven window coverings are from the DISC Collection for Smith & Noble. 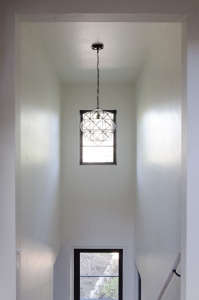 Above: Hanging above the staircase is a Granada Lantern from L’Aviva Home. 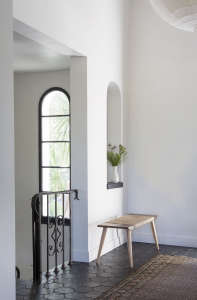 Above: Hex-shaped black terracotta tiles were used in the entry lobby and the landing area. 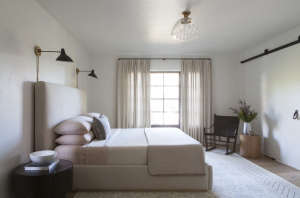 Above: The master bedroom features a DISC custom bed. The ceiling light and rug were both vintage finds. The sliding barn door leads into the adjoining bathroom. 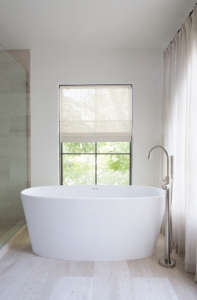 Above: The master bathroom with stand-alone tub and limestone floor. 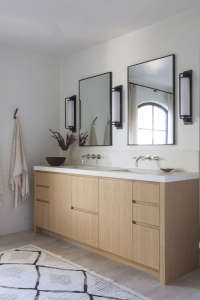 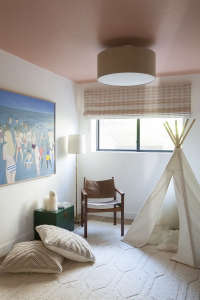 Above: A child’s room with a dusty pink painted ceiling adds softness and depth. 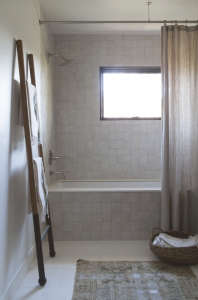 Above: The Moroccan tile used as a backsplash in the kitchen is used again in the guest bathroom and was sourced from the Ann Saks Idris Collection. 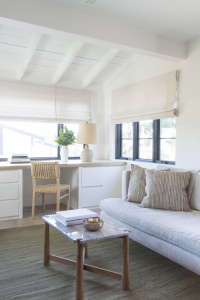 Above: An office area with custom cabinetry doubles as a media room. 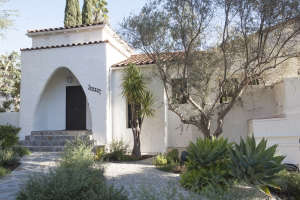