Anishka Clarke and Niya Bascom of Brooklyn’s Ishka Designs are an international duo–she grew up in Jamaica; he was born in London to Jamaican and Guyanese parents and raised in NYC. But neither had spent much time in Paris before Edouard, a French friend living in Brooklyn, came to them with an intriguing project: His childhood duplex near the Eiffel Tower–in a small late-19th-century building that originated as studios and living quarters for artisans working on the tower–needed editing and an overall update. Edouard’s father is a sculptor, and the ground floor had been his studio surrounded by the family’s hodgepodge living quarters.

Clarke and Bascom’s job was to introduce order and a logical flow to upstairs and down–and to cull through decades’ worth of art, photography, souvenirs, rock collections, and other memorabilia–”every scrap of it was meaningful to Edouard,” says Clarke. The good news: When Edouard, a consultant, and his family aren’t in town, they rent the apartment via Airbnb. Scroll down for details.

Above: “Edouard’s wife is from the Caribbean, so we wanted to add a shot of brightness,” says Clarke. The display of family treasures begins just beyond the entry: The low chair is one of several Edouard’s mother brought home from travels in India. The sculpture above it is by Edouard’s father, François Portelette.

The designers’ biggest challenge? “The language barrier,” says Clarke. “We had to get by on long-ago French language classes and, when push came to shove, Google Translate. Construction and work permits were involved, and we collaborated with a local French architect and contractor. Our architect spoke little English but he walked around with a translation book. Thankfully, construction documents are universal. 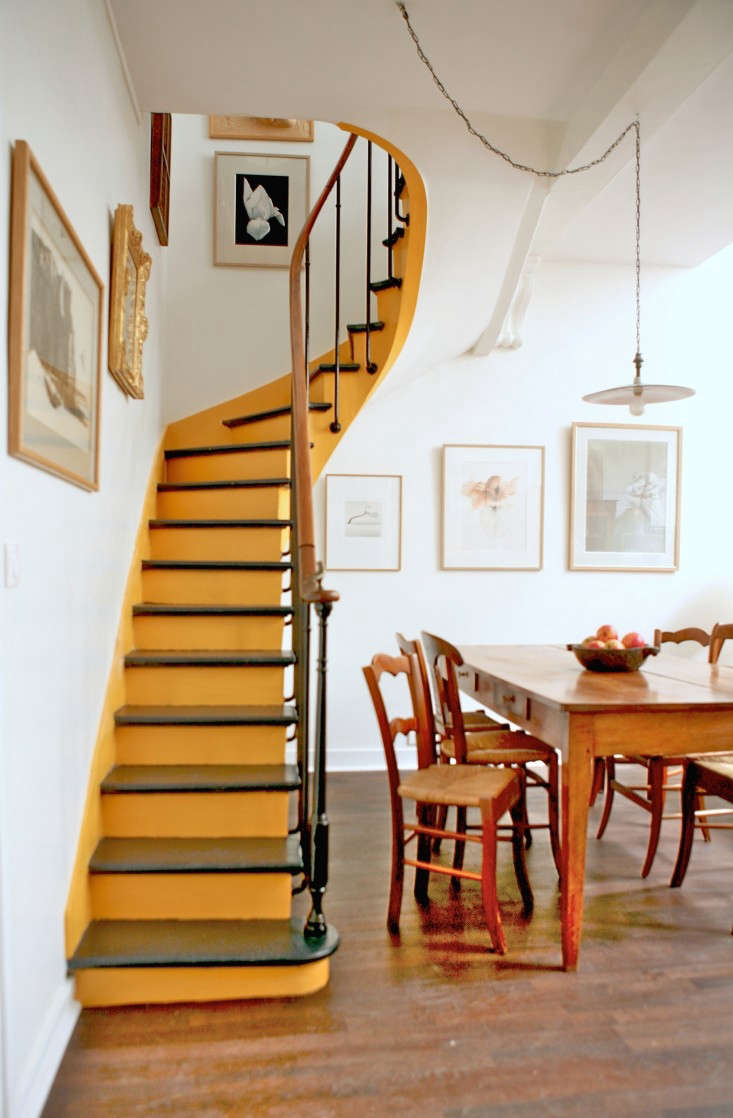 Above: The designers also cloaked the stairway in marigold (with deep green treads). Next to it, they introduced a dining area: “The apartment had only the world’s tiniest kitchen table,” Clarke told us. “We found the dining table tucked in another room, and we added rush-seated chairs to the ones that were already there.” They bought the hanging light at a Paris flea market. 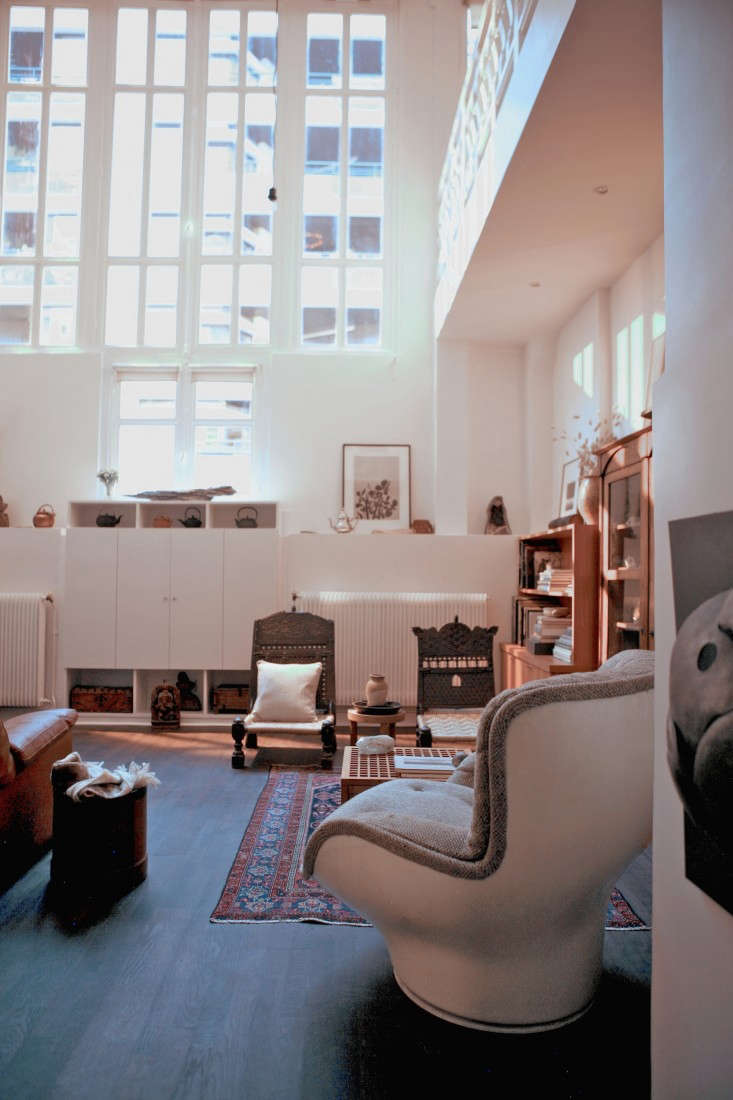 Above: The crowning glory of the duplex is its classic atelier–formerly François Portelette’s studio–with 20-foot ceilings. Under the original window wall, the designers introduced cabinets for storing and displaying art. They added new hardwood flooring throughout. Most of the furniture belonged to Edouard’s family, including the Indian carved wood chairs and the mod gray-upholstered design.

The apartment’s second floor has a loggia that overlooks the living space. 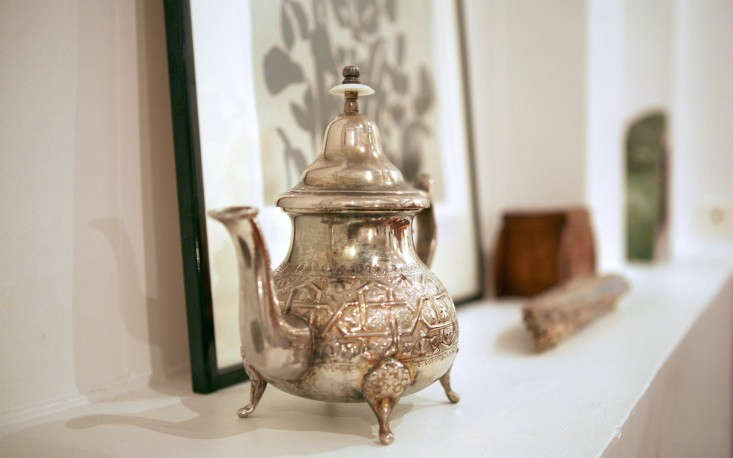 Above: Highlights from the apartment’s teapot collection, formerly hidden in kitchen cabinets, are now on view in the living room. 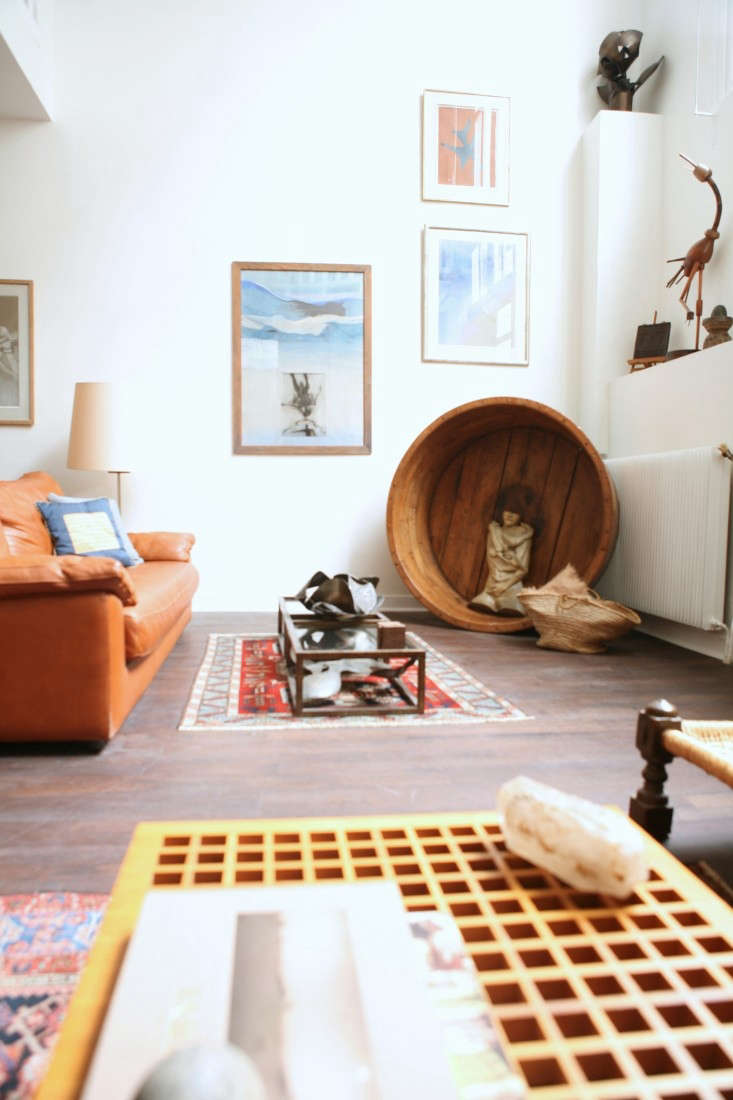 Above: A large part of the project was curating the art, much of it by Portelette. In a corner of the living room, the designers propped a petrin, a wooden grape trough, and tucked a sculpture inside. 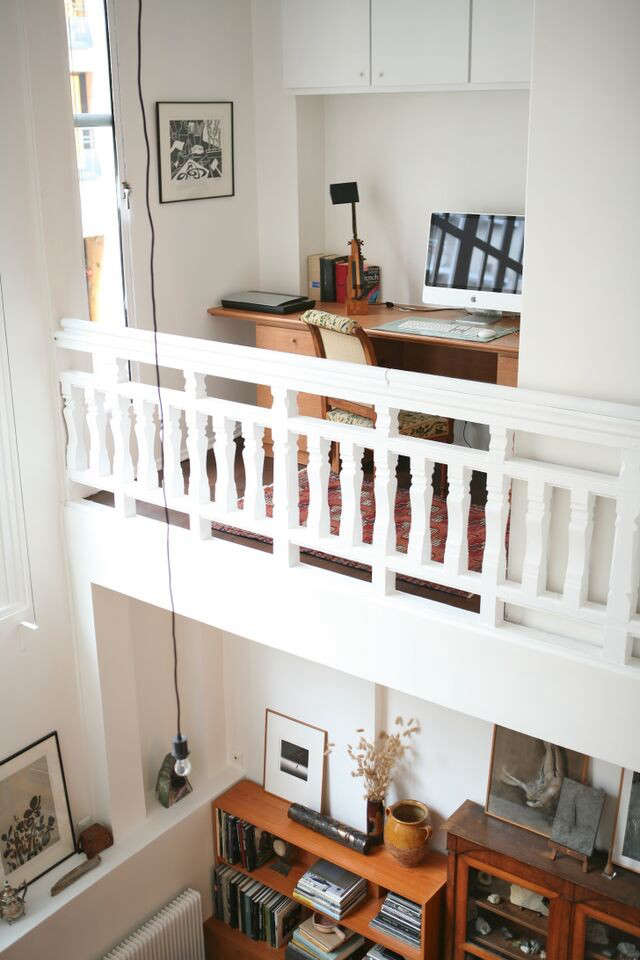 Above: Bascom and Clarke created a built-in work area at one end of the loggia. Below it, you can catch a glimpse of Edouard’s childhood rock collection displayed in a living room cabinet. 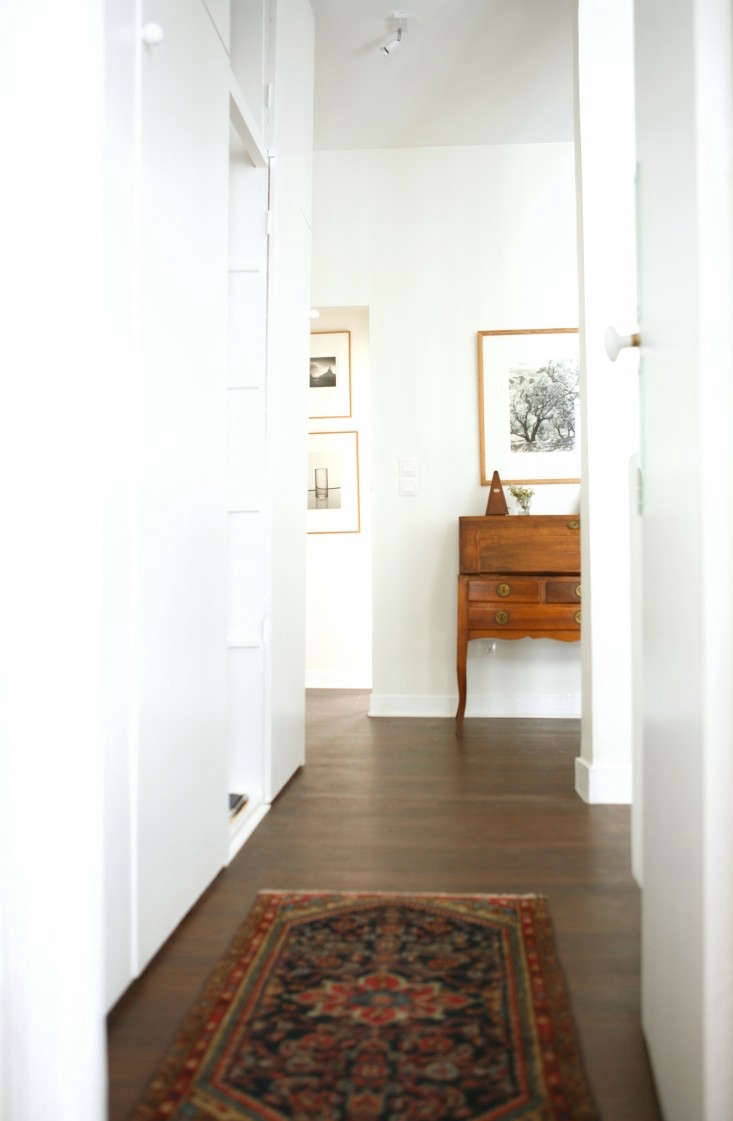 Above: The upstairs floor has two bedrooms and two baths off a central hall 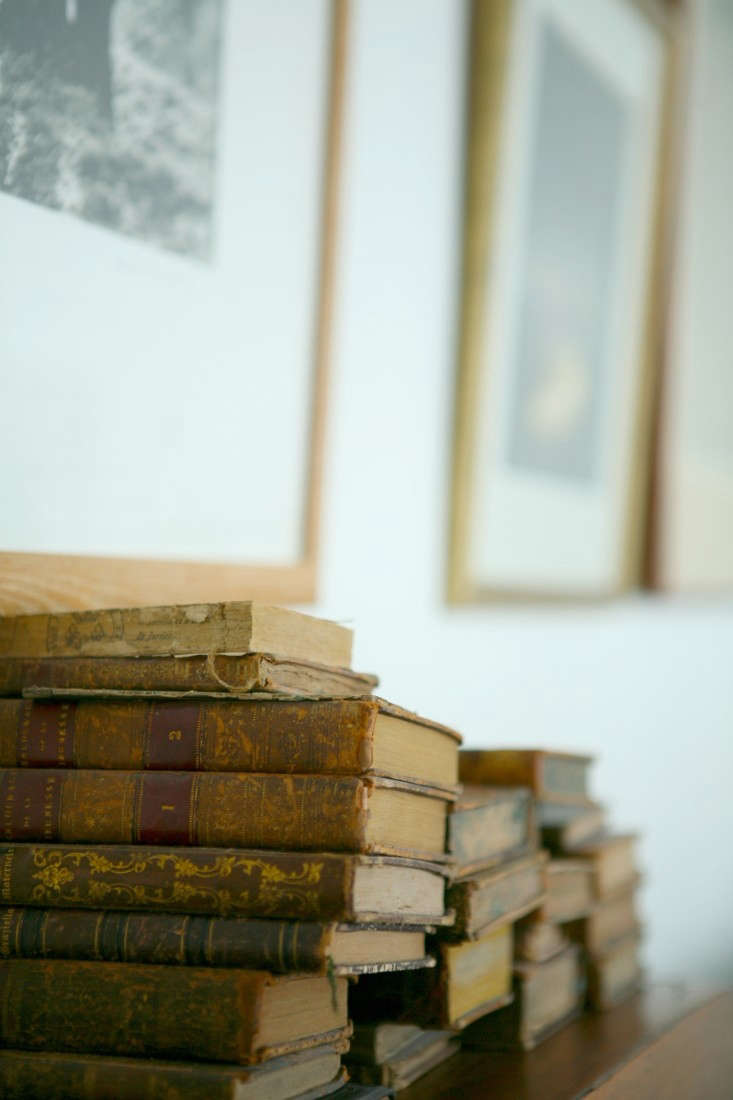 Above:  A sampling of the apartment’s antique books. (Clarke and Bascom also discovered collections of road maps and matchbooks.) 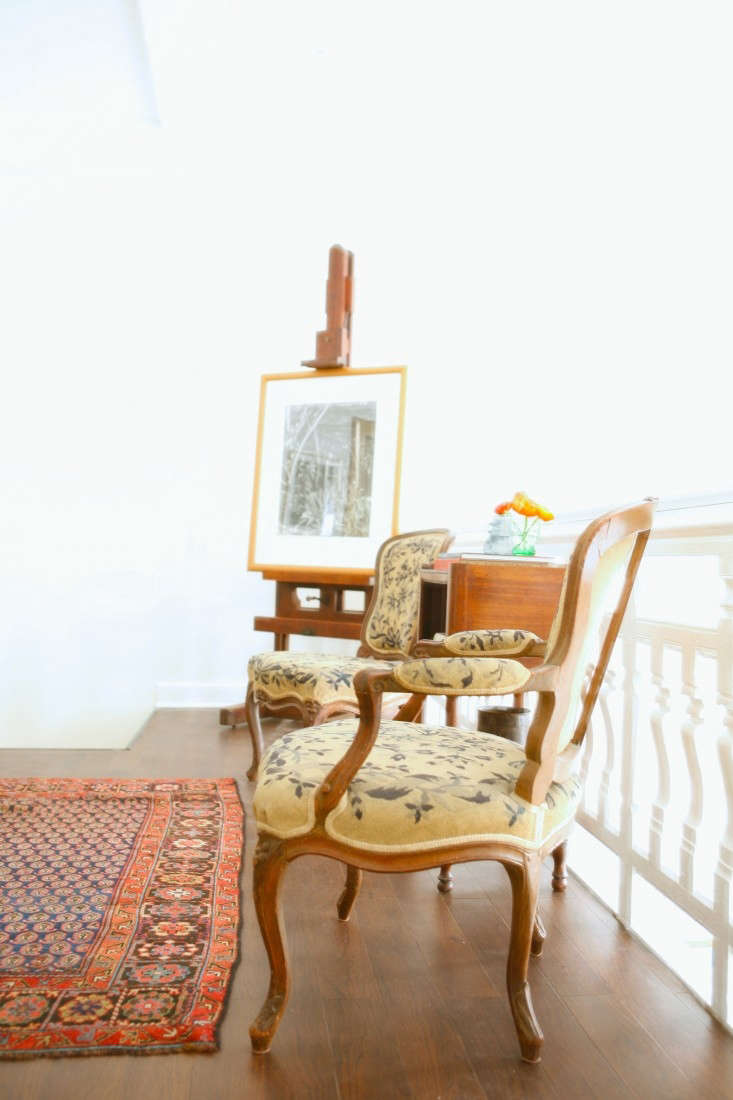 Above: Several heirlooms, including a pair of embroidered fauteuils, made the cut on the loggia. 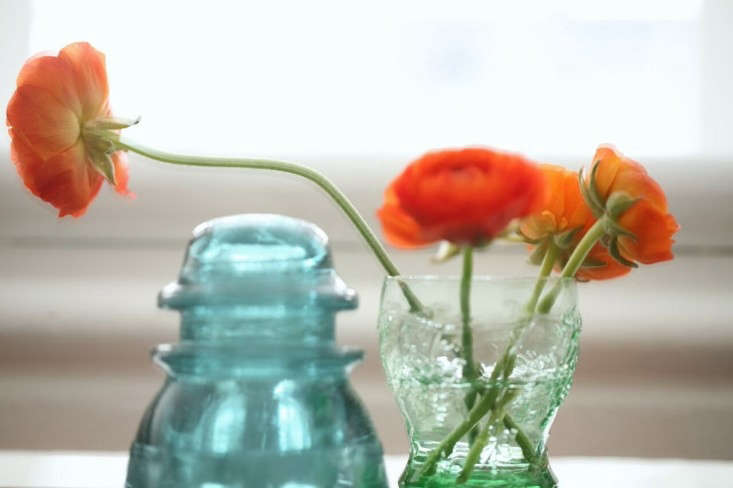 The two-bedroom, two-and-a-half-bath apartment sleeps six and rents for $350 a night. See more of it on Airbnb.

Go to Gardenista to explore Ishka Designs’ landscape work in Before and After: A Modern Brooklyn Backyard on a Budget.

Current Obsessions: A Dose of Color