When Meryl and Ed Mandelbaum first saw their sprawling property on a lake near Great Barrington, MA, consisting of seven cabins in various stages of disrepair, it was like something out of The Blair Witch Project. After taking the real estate plunge, the couple approached Ritch Holben of RhDesign to create a master plan for the lakefront property. Holben thoughtfully reimagined the structures one by one and began by rehabbing a couple of the cottages for immediate occupancy. Next, the couple turned their attention to the main house.

Respecting both the surrounding woodlands and the local building aesthetic, Ritch modeled the home on traditional barn architecture. The 2,900-square-foot, three-bedroom house is both rustic and refined, melding primitive touches with both industrial and up-to-the-minute materials. Meryl says: “We wanted something in the New England vernacular, but we also wanted modern–a house that from afar looks like it has been in the landscape forever, but as you get closer, you see that the mix of materials is quite modern. It’s a balance that has been going on in the Berkshires forever.”

Photography by Keller + Keller via the Boston Globe. 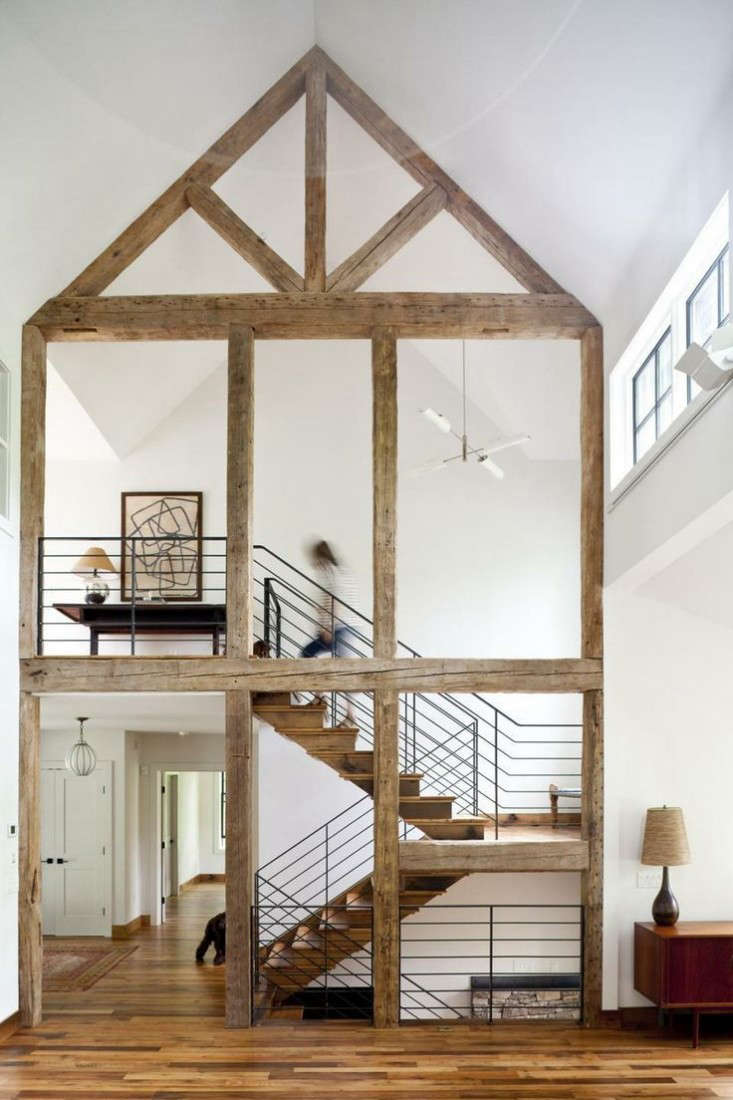 Above: Ritch used reclaimed posts and beams from barns to create the outline of what he calls an “iconic house shape” in the core of the house. He says, “It’s how we drew as children, so people respond emotionally to the shape.” Ritch felt that without the reclaimed wood skeleton, the interior would have seemed too modern and stripped down. He says, “It furthers the rustic versus modern, old versus new dialogue; it’s what the whole house is about.”

The floors and switchback staircase, designed to reinforce views of the lake, are made from salvaged antique oak sourced from Tallon Lumber in Canaan, Connecticut. A David Weeks Studio Torroja Cross Chandelier adds a contemporary edge. 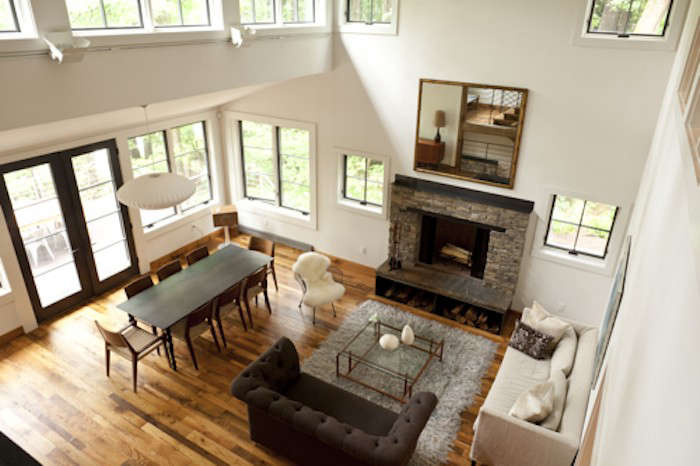 Above: The double-height ceiling in the main living space lends an expansive feel and the neutral palette invokes a sense of calm. Meryl, who calls herself “a hunter and gatherer,” chose the furnishings herself, though says she emailed everything to Ritch for his opinion. The vintage Danish modern coffee table, designed by Henning Norgaard, stands atop an ivory Madeline Weinrib Tulu Carpet handwoven in Turkey from shorn angora wool. 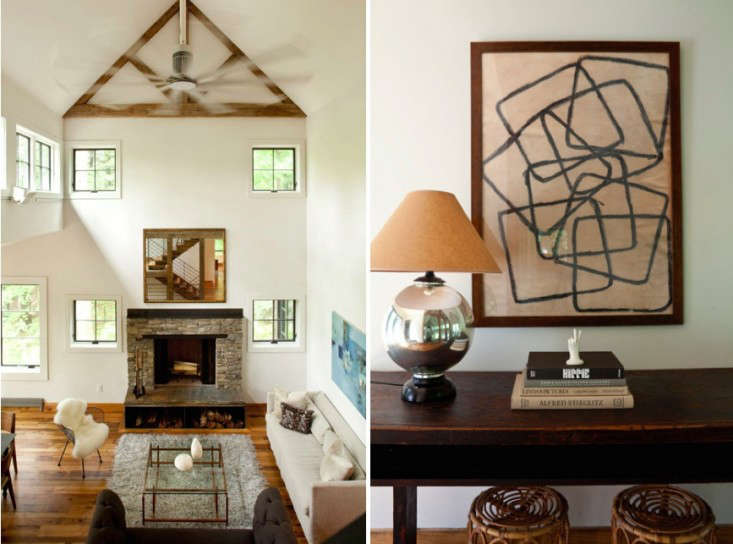 Above L: High on the wall, interior windows offer the second-floor study a view of the lake. Ritch says, “You can look through the windows, straight across the tall living room, out to the water.” Above R: “Squares” by Peter Dunham hangs above a well-worn wooden console table at the top of the stairs.

The wood-burning fireplace is faced with local fieldstone, which is also used on the exterior chimney. An open, raised hearth constructed from raw steel, made by the same fabricator as the interior and exterior railings, provides a place to store firewood and doubles as a bench. The mantle is a length of bent raw steel attached with exposed bolts. 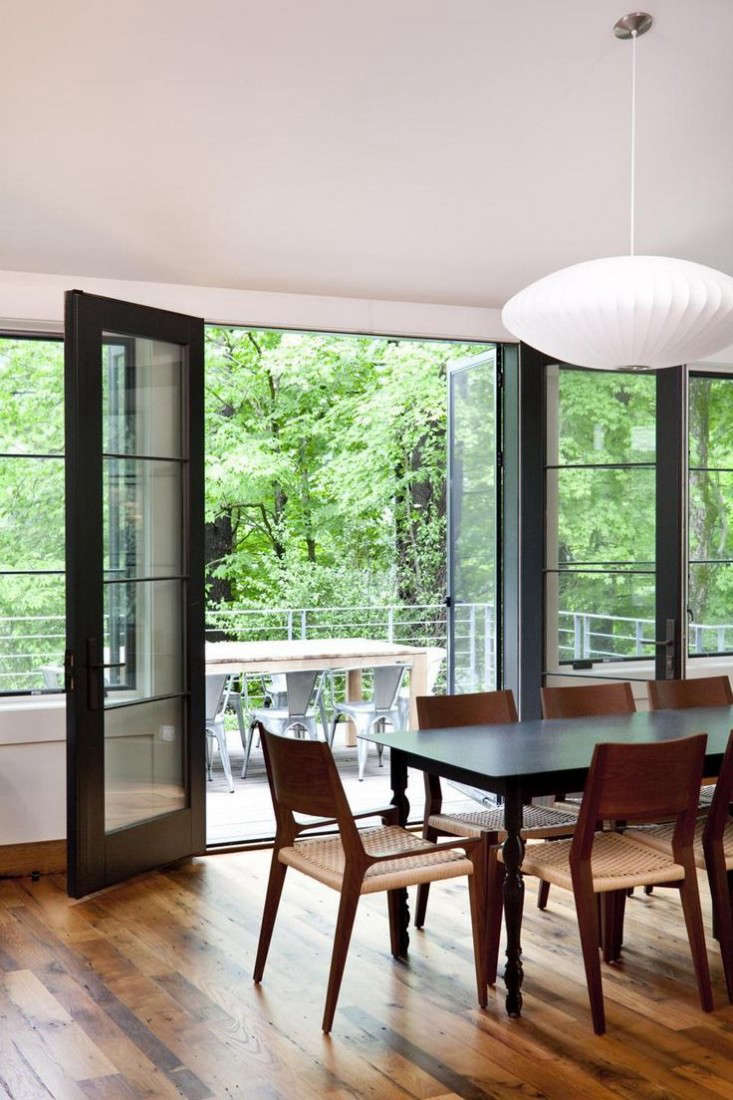 Above: A George Nelson Saucer Pendant Lamp hangs above a Gregor Jenkin Turned Table, which is surrounded by McGuire Seido Chairs handcrafted in American black walnut. Meryl calls the black steel table with turned legs by the Johannesburg-based designer “a crazy splurge.” The French doors and windows are all by Pella and have muntins in an extra-thin profile to mimic industrial steel windows. Ritch says, “Meryl loves the look of steel windows, but the cost would have been way over budget. Instead we emulated the look while getting the thermal properties of a good residential window.” 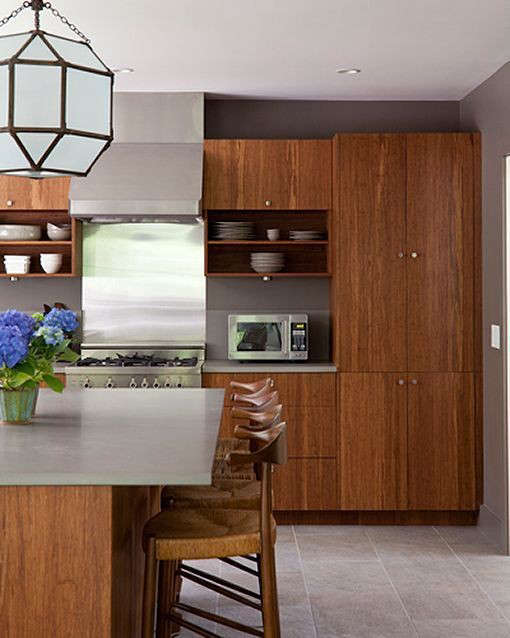 Above: The monochromatic kitchen maintains the soothing palette with sleek but earthy cabinets made from bamboo. There’s plenty of storage, plus open shelving, which is both convenient and breaks up the wood masses. The countertops are limestone, another splurge that, Ritch says, “Meryl went to major pains to get,” and the floor is done in large format Italian porcelain tiles. A Visual Comfort Morris Lantern designed by Suzanne Kasler hangs above the oversize island lined with four vintage Danish modern bar stools. Meryl says, “I had two already and obsessed over finding two more.” 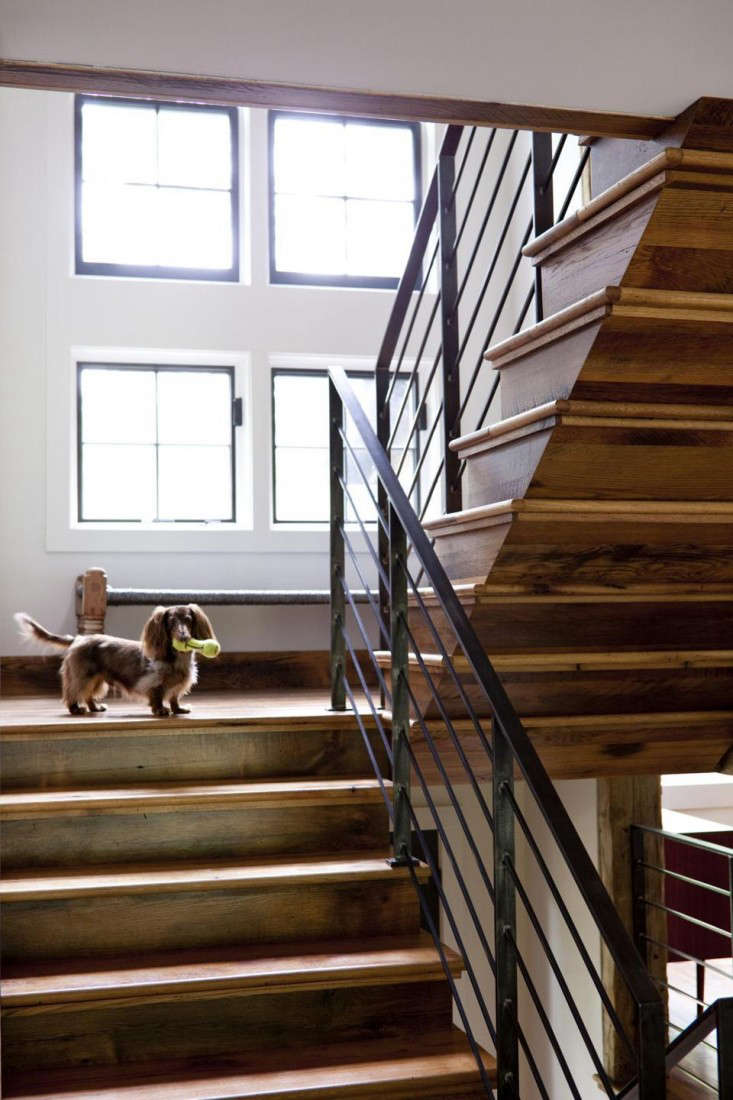 Above: Square casement windows line the stairwell. The flat, black powder-coated steel rails, custom fabricated by a local tradesman, were clear-coated to show the manufacturing marks. Ritch says, “Meryl wouldn’t have anything rounded.” 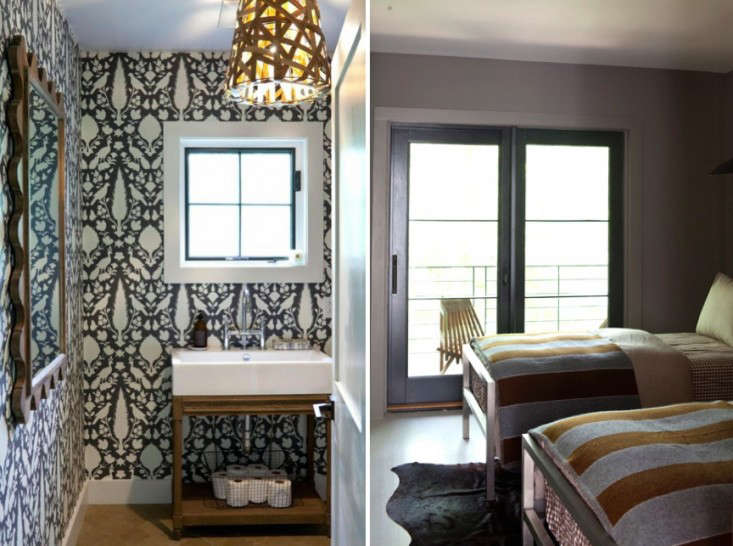 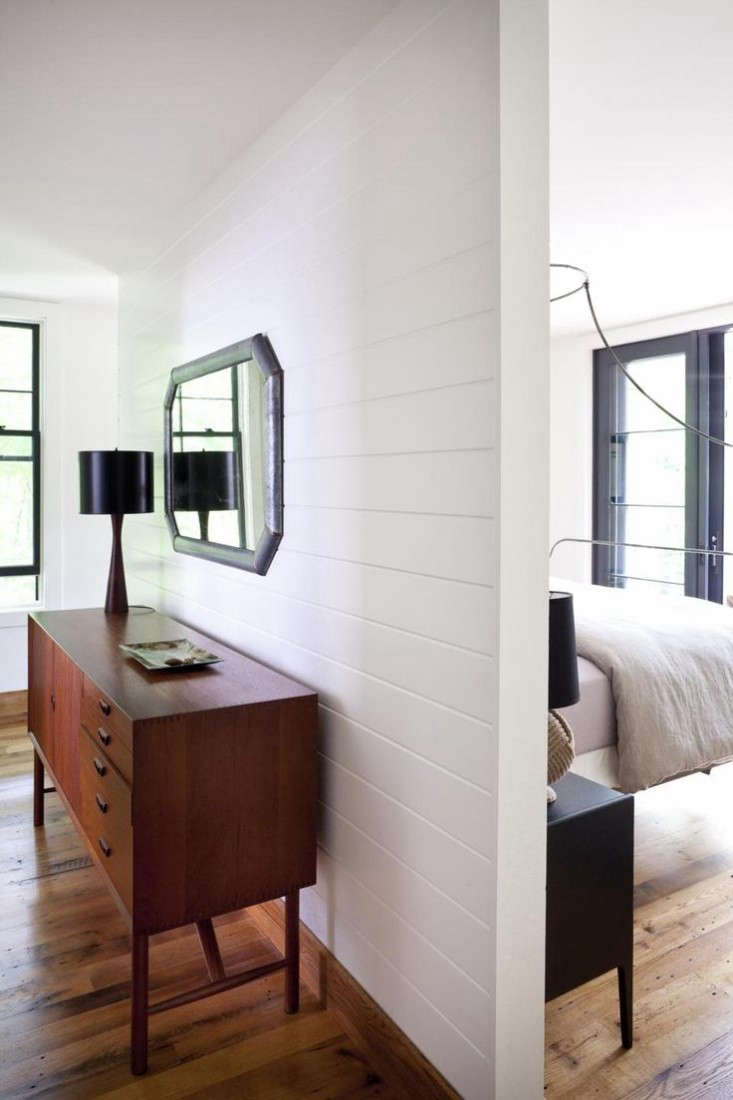 Above: The left side of the house is a private zone dedicated to the master suite. A floating horizontal, wood slat wall is the backdrop for the bed on one side and a vintage credenza on the other. The bedroom has French doors that lead to a private deck. 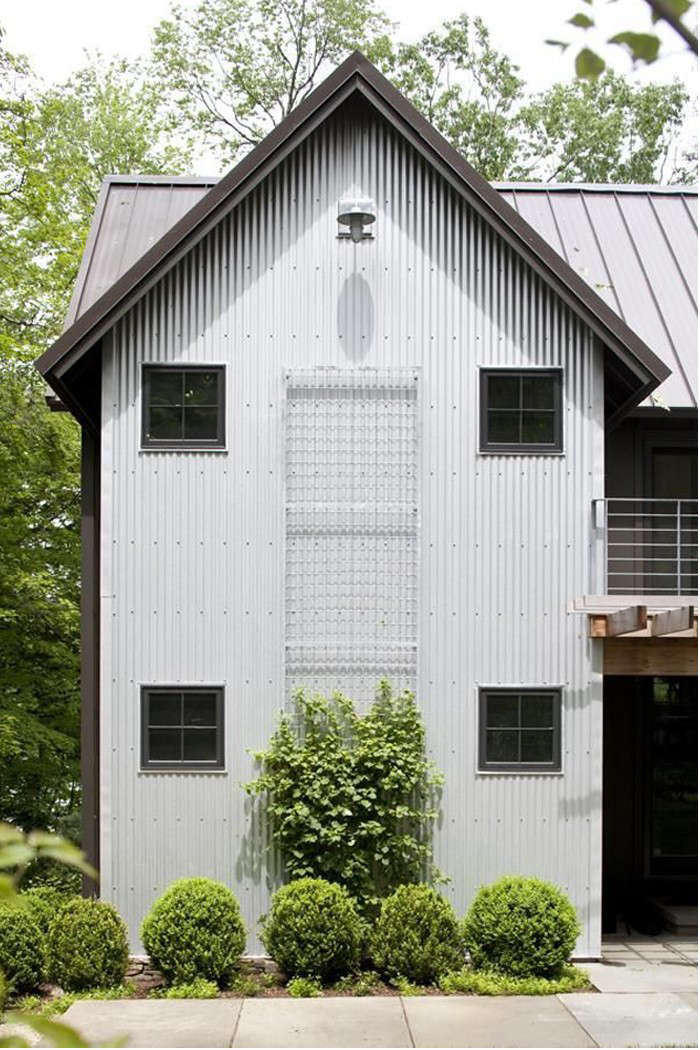 Above: Ritch used no- or low-maintenance building materials, which is especially important for secondary residences. This barn-like portion of the front of the house is clad in corrugated metal and the whole structure is topped with a standing-seam metal roof. Ritch calls the deck over the entry, which is carved out of the main volume of the house, “Meryl’s Eva Perón balcony.” 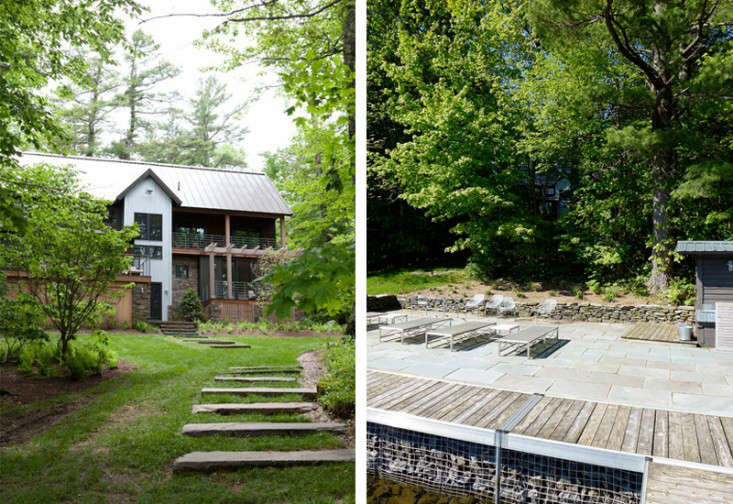 Above L: The back of the house is sheathed in cedar-shake siding and local fieldstone. Metal-clad windows, teak decks, and galvanized metal rails are equally resilient. An informal arrangement of bluestone pavers leads down to the water. Above R: Ritch masterminded and oversaw the complete overhaul of the 200 feet of lakefront, which includes two docks and a bait house. He devised a system of gabions to hold back the water. The bluestone patio and cedar boardwalk give the otherwise wild landscape a bit of polish.

For more architecture and design ideas from the Berkshires, see our posts:

In collaboration with: New from Parachute: Winter-Weight Throws and Travel Gear in Time for the Holidays

Steal This Look: A Heritage-Feeling Kitchen in New England

Required Reading: A Glimpse Inside “The Maine House”