My friends Ayelet Waldman and Michael Chabon live in a shingled Berkeley Craftsman bungalow that reminds me of my days as the child of local radicals. Our place on nearby Grant Street was furnished in the requisite hippie style of the day; perhaps that’s why, when I first had dinner at their house, I fell in love with it; it was as if I had slipped into some sort of alternate childhood. The dark wood paneling, the glass-fronted bookcases, the Danish modern furniture, the George Nelson lights. And the books everywhere: stacked two-deep on shelves, piled in a tower higher than a man, strewn across the stairs.

Ayelet (she’s a lawyer-turned-NY Times-best-selling author) and Michael (he’s the Pulitzer Prize-winning author of The Amazing Adventures of Kavalier & Clay) bought the property in 1997 when she was “hugely pregnant,” as she says. “We were renting a house on Claremont Avenue with 47 steps to the front door. We were trying to buy in the neighborhood, but we kept getting outbid. Harrison Ford’s son paid cash for one of the houses we wanted. We used to walk by this house. The roof had fallen in; there were squirrels nesting inside. One day, we were passing by and this guy was tearing it apart. He was going to renovate it and put it on the market. I said, ‘Stop what you’re doing. Sell it to us, right now, as is. I am 1,000 months pregnant.’ But he said no. I was in a panic. Our rental lease was coming to an end. The month before I gave birth, I stood in the demolished front yard of the house, crying to this guy, ‘If you don’t sell us this house, we are going to be homeless.’ “

And then they wondered what they had done. The house had no countertops, no appliances. There was lead paint. They had to replace the heating system. “And I’m about to have a baby,” Ayelet says. They forged ahead and fixed up the kitchen and the bathrooms, and then, a year ago, Ayelet enlisted the help of her friend Sarah Reid to pull the interiors together. “She has this cool aesthetic. She would show me an idea, and I would be on the phone a few hours later ordering two chairs from some warehouse in LA. I am the most decisive person in the world.”

N.B.: To learn more about Ayelet’s new novel, Love and Treasure, go to Ayelet Waldman (she’s in the midst of her book tour and you can catch her in the Bay Area, Boston, NYC, and in Maine over the next couple of months). 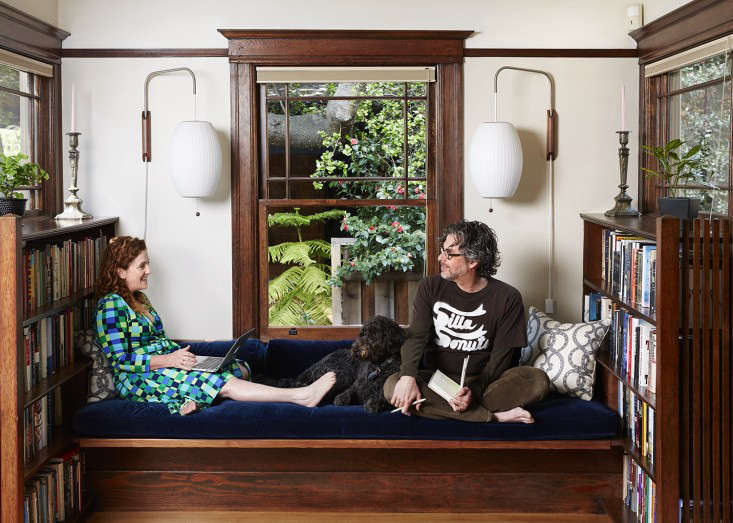 Above: Ayelet and Michael at home with Mabel, the family’s Labradoodle. The window seat is covered in blue velvet from Slips; a pair of George Nelson Cigar Sconces ($375 at Y Lighting) gives the nook a modern lift. “The woodwork in the living room was black until last year,” Ayelet says. “We wanted to lighten it up. Last year, this guy came with an alcohol-based wipe and it came right off. Turns out it was shellac.” Ayelet’s dress is by Oakland designer Lesley Evers. 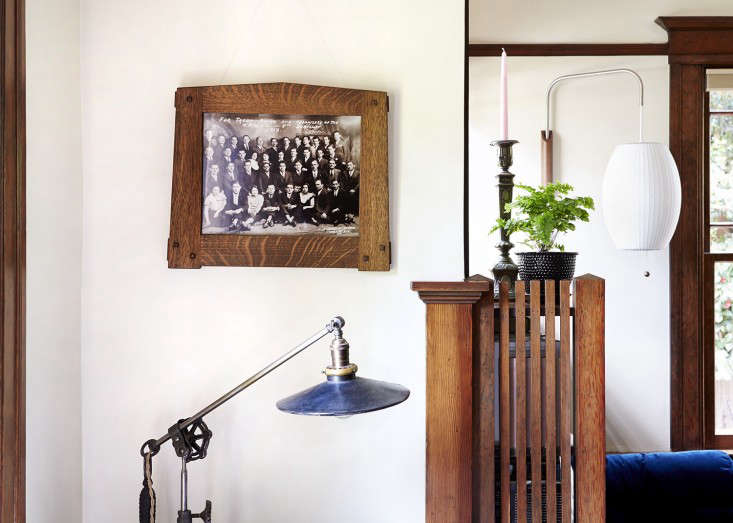 Above: The framed photo is of Ayelet’s grandfather’s furrier union in New York City. Her grandmother smuggled the candlestick–one of a pair–out of Minsk by hiding them under her skirts. “When I discovered the story of the Hungarian gold train of looted Nazi valuables, I thought of my grandmother’s candlesticks,” she says. “It inspired me to write Love and Treasure.” 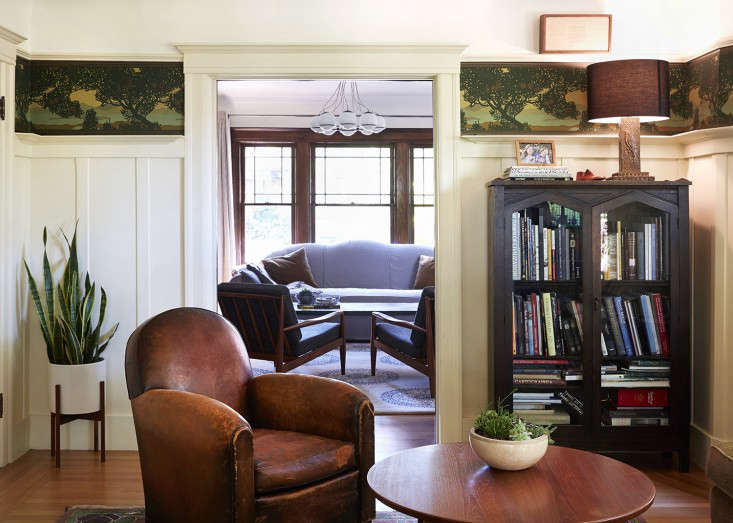 Above: The original wood paneling was mostly intact throughout the house, but the sitting room was already painted white when the couple moved in. They added the Arts & Crafts Natural Fir Tree Frieze from East Bay art wallpaper company Bradbury & Bradbury. 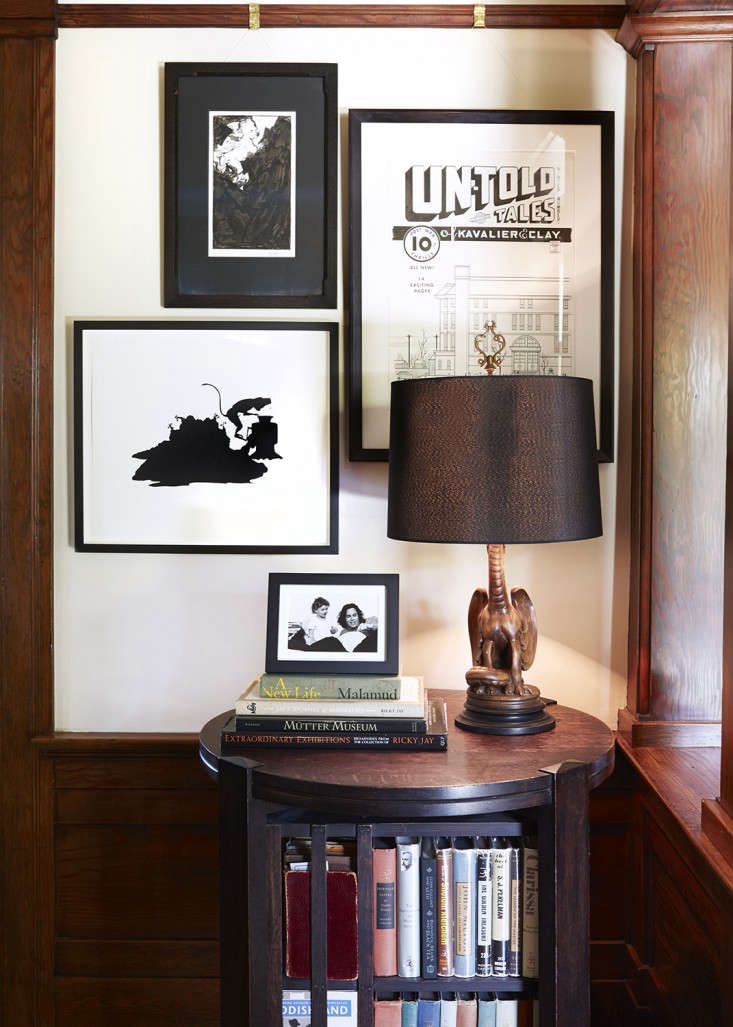 Above: Comic book legend Chris Ware created the poster for Untold Tales from Kavalier & Clay, published by McSweeney’s. “I won the Kara Walker cut-paper silhouette in a raffle at a fundraiser for Barack Obama,” Ayelet says. “We were at law school together.” 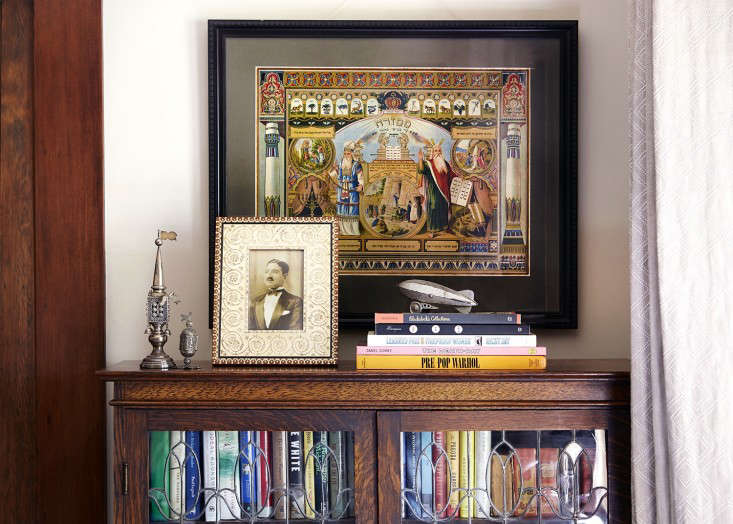 Above: “This corner of the living room has meaning. Michael and I went to Budapest when we had just met. It felt like the Jews had been packed up a week ago. We bought the spice box for Friday services. I like to think it’s old. The metal rocketship symbolizes the baby we lost.” 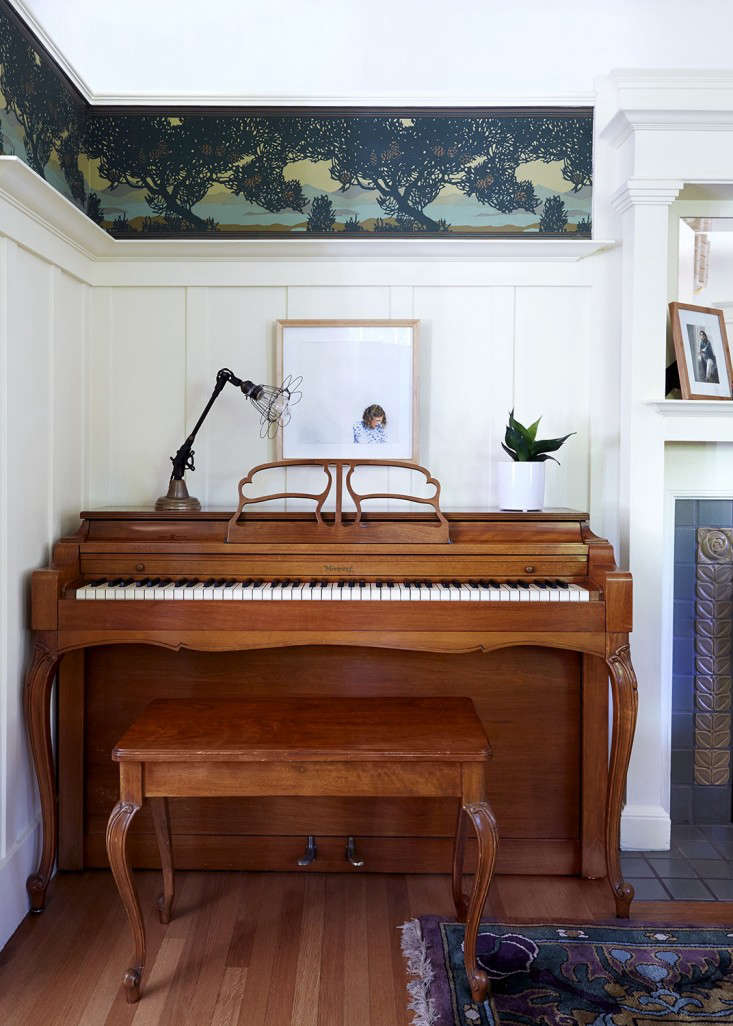 Above: “Everyone bangs around on the piano,” Ayelet says. “We picked it because it was small and cute.” 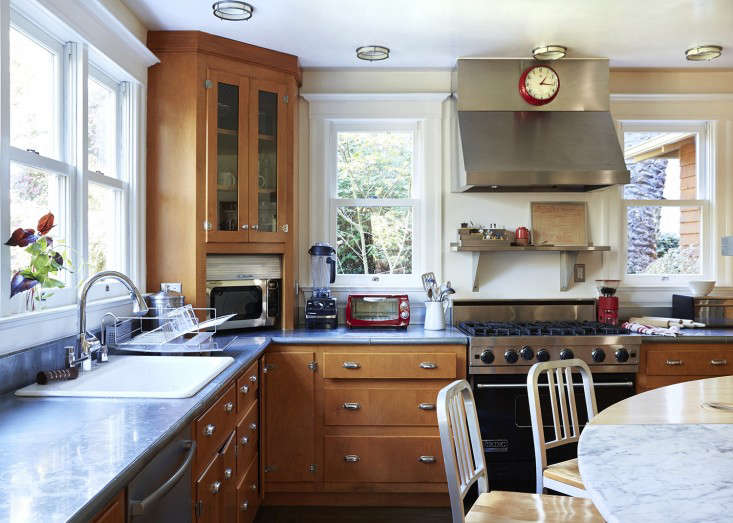 Above: Alameda-based furniture designer Christopher Loomis built the cabinetry in the kitchen. 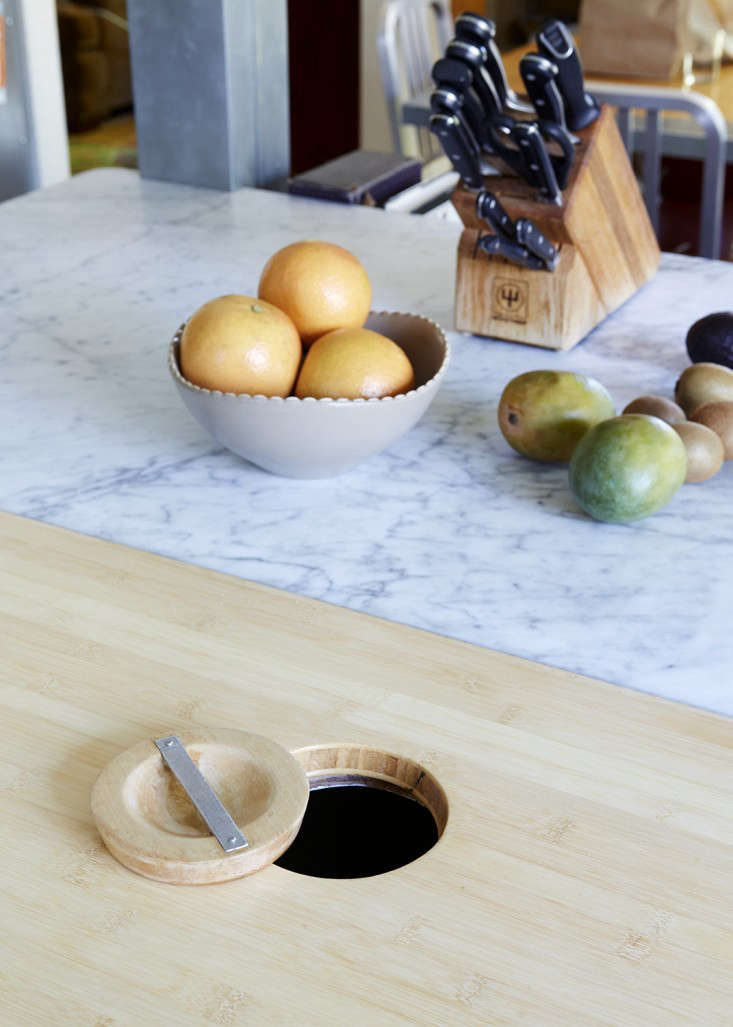 Above: The kitchen island is half Carrara marble, half bamboo. Michael designed the inset circular cut-out for easy composting (“Brad Bird came over for dinner and co-opted the idea for The Incredibles,” Ayelet says). 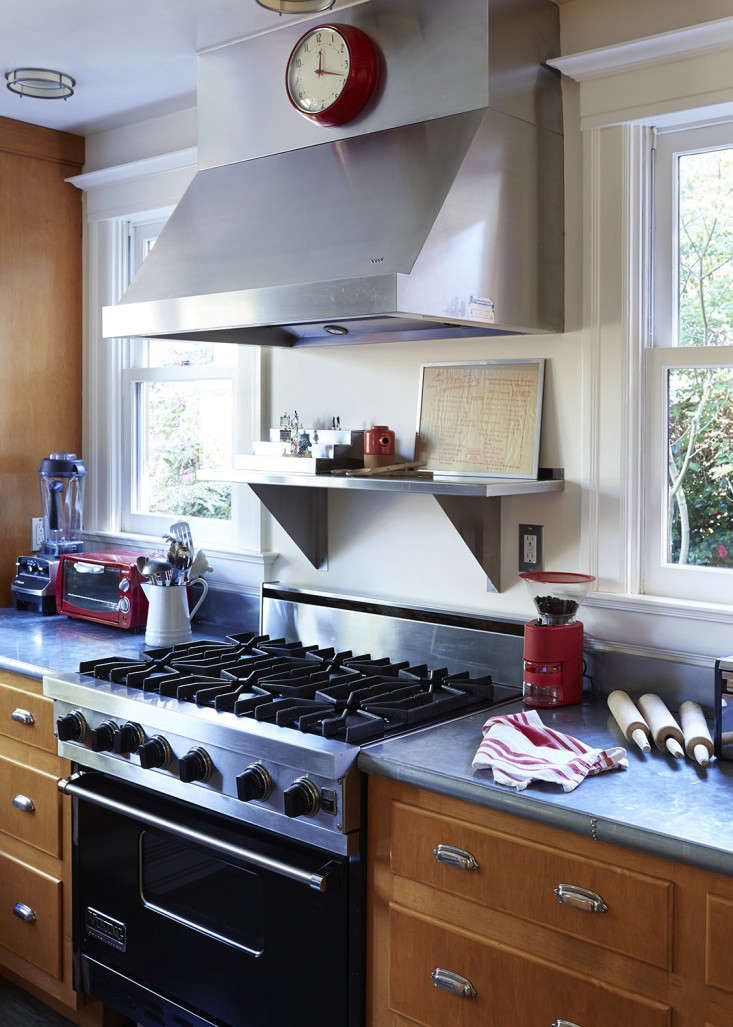 Above: The kitchen counters are sheathed in zinc, inspired by the Zinc Cafe in Laguna Beach, a favorite hangout of the couple when Michael was studying for his MFA at UC Irvine. 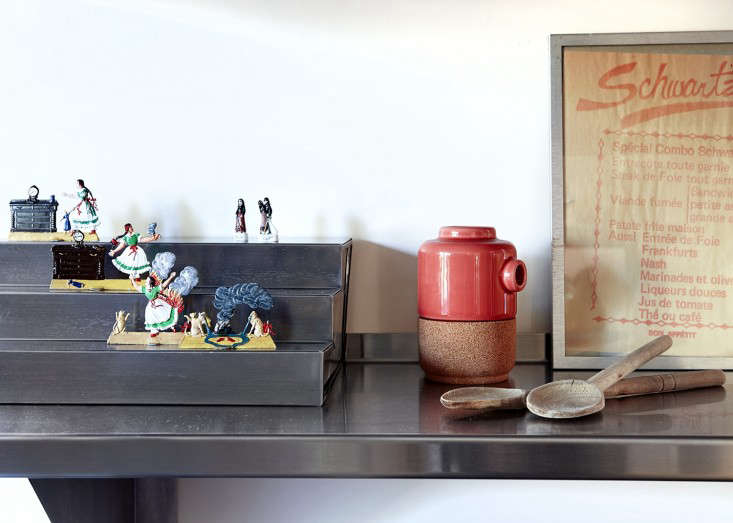 Above: “The German figurines tell the story of a woman catching on fire; we got them at Jutta’s Flowers around the corner from our house,” Ayelet says. 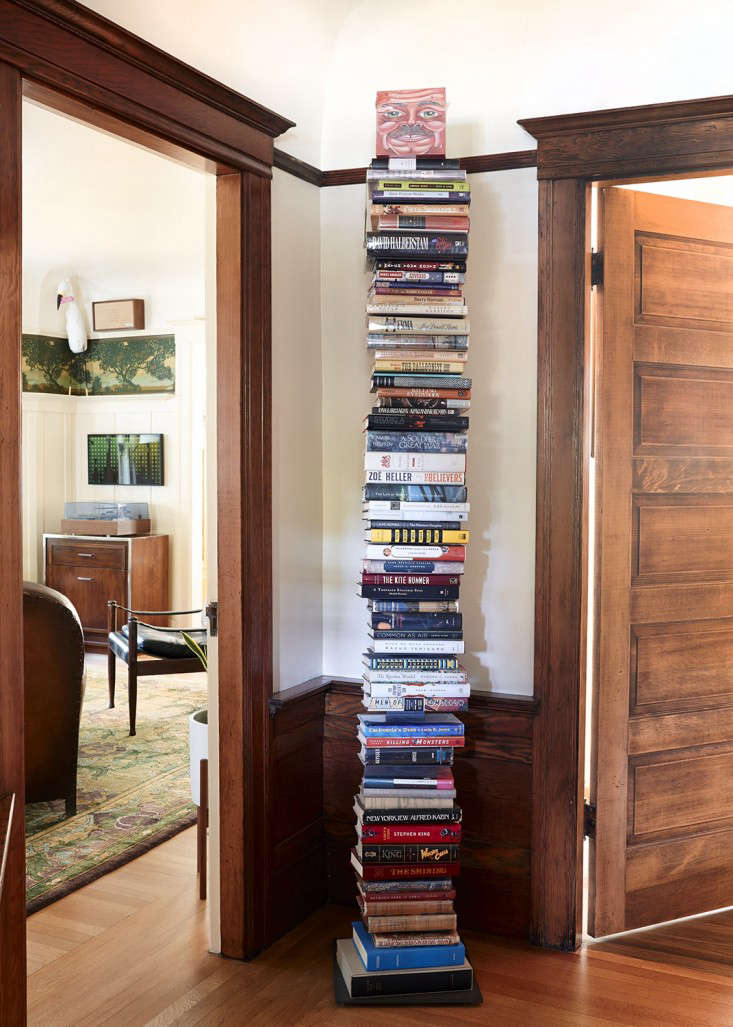 Above: In the hallway, books stacked on a Sapien Bookcase ($198 at Design Within Reach) form a literary totem pole. Note the vintage wall-mounted KLH speaker in the sitting room; it’s a Chabon obsession. 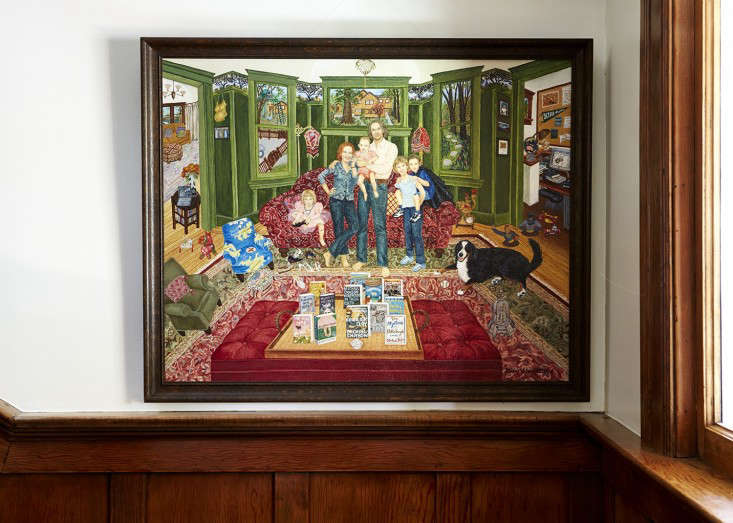 Above: A family portrait by Mimi Vang Olsen hangs in the stairwell. 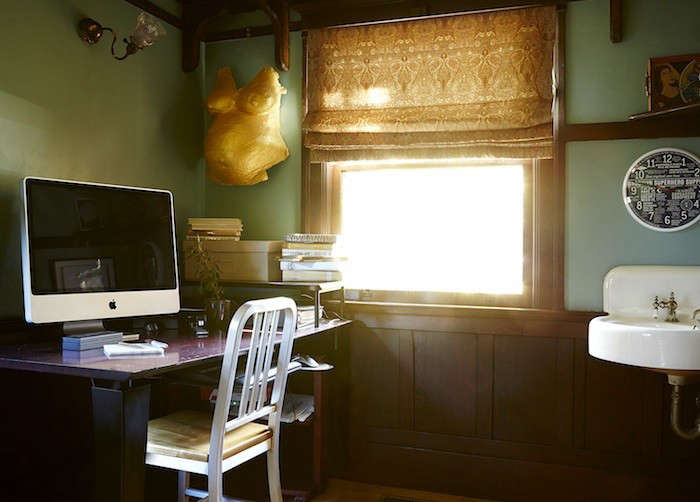 Above: The first-floor office was a doctor’s consulting room in a former life. “The house was built in 1907 by a physician,” Ayelet says. “Someone in the historical society told us he did abortions. I have this image of this warm and lovely guy doing a public service for the women of Berkeley.” The gilded body cast on the wall is of Ayelet during one of her pregnancies. 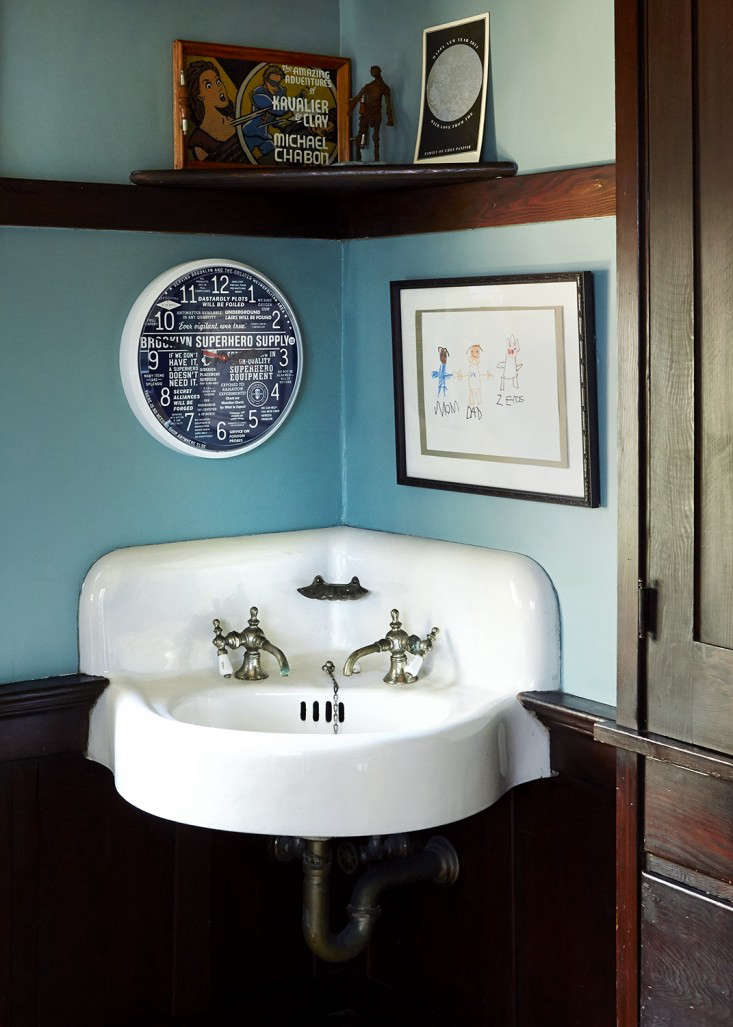 Above: The cast iron enameled corner sink is original; the clock is from the Brooklyn Superhero Supply Co., which lures unsuspecting children into 826 Brooklyn, an outpost of 826 National, the nonprofit writing center founded by Dave Eggers, Vendela Vida, and Ninive Calegari. 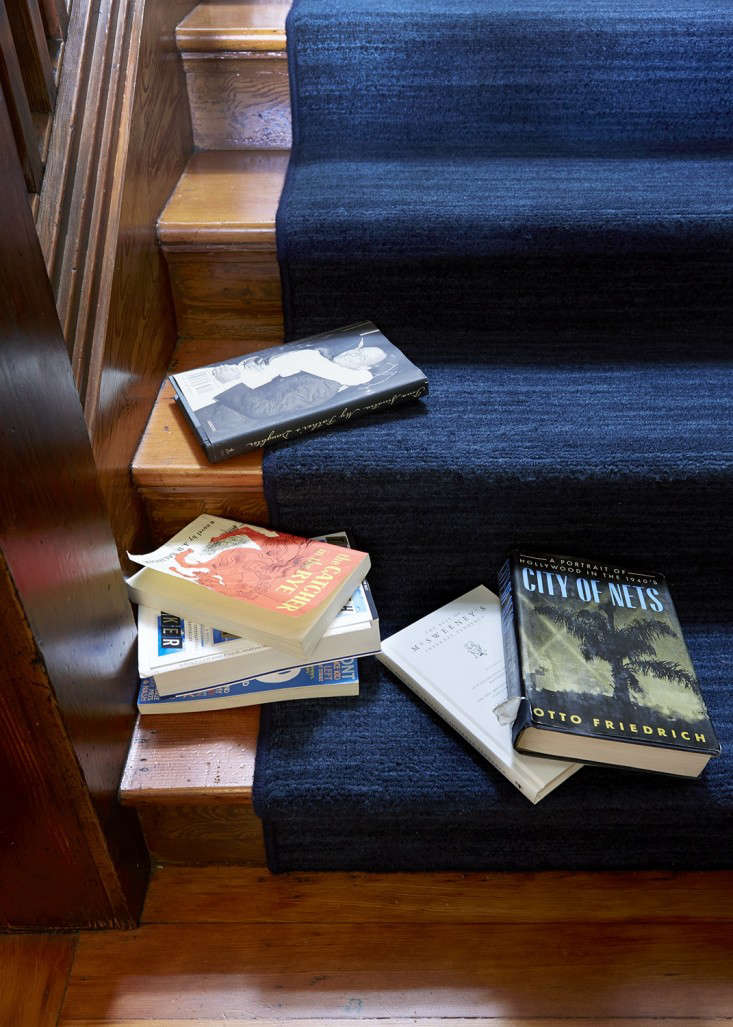 Above: Books everywhere, even scattered on the stairs (we didn’t stage this, promise). The custom-bound New Zealand wool Bellini Runner in Marina is from Masland Carpets & Rugs. 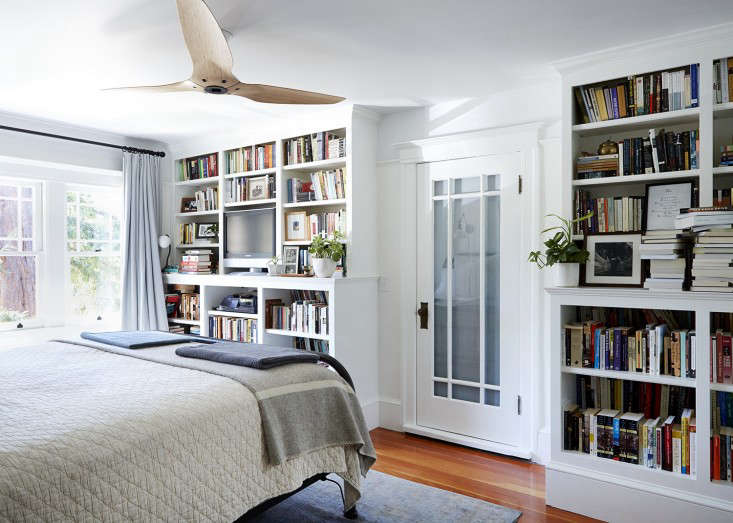 Above: The Haiku Ceiling Fan is from Big Ass Fans. 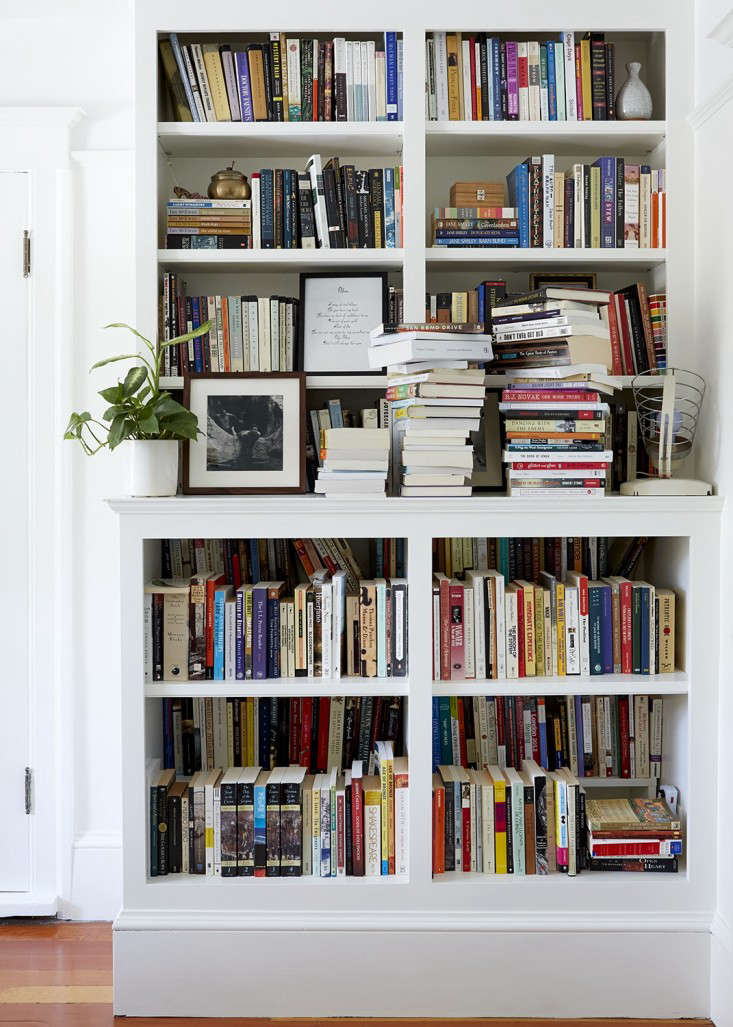 Above: In their bedroom, Ayelet and Michael spec’ed custom-built two-tiered bookshelves with risers to allow for an accessible back row. 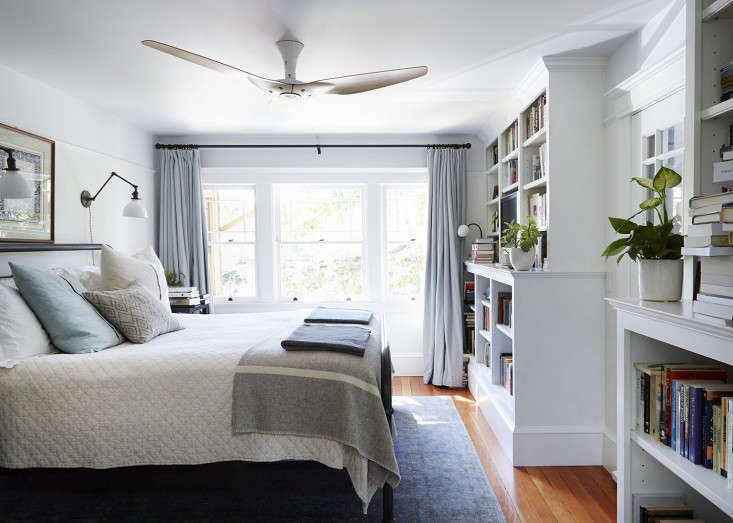 Above: “I have a sheet fetish,” Ayelet says. “My favorites are Sferra Diamante Sateen Sheets. They are horrifically expensive. I bought mine 20 years ago and carefully mend them by hand when they fray. I plan to die on those sheets when I am 97.” 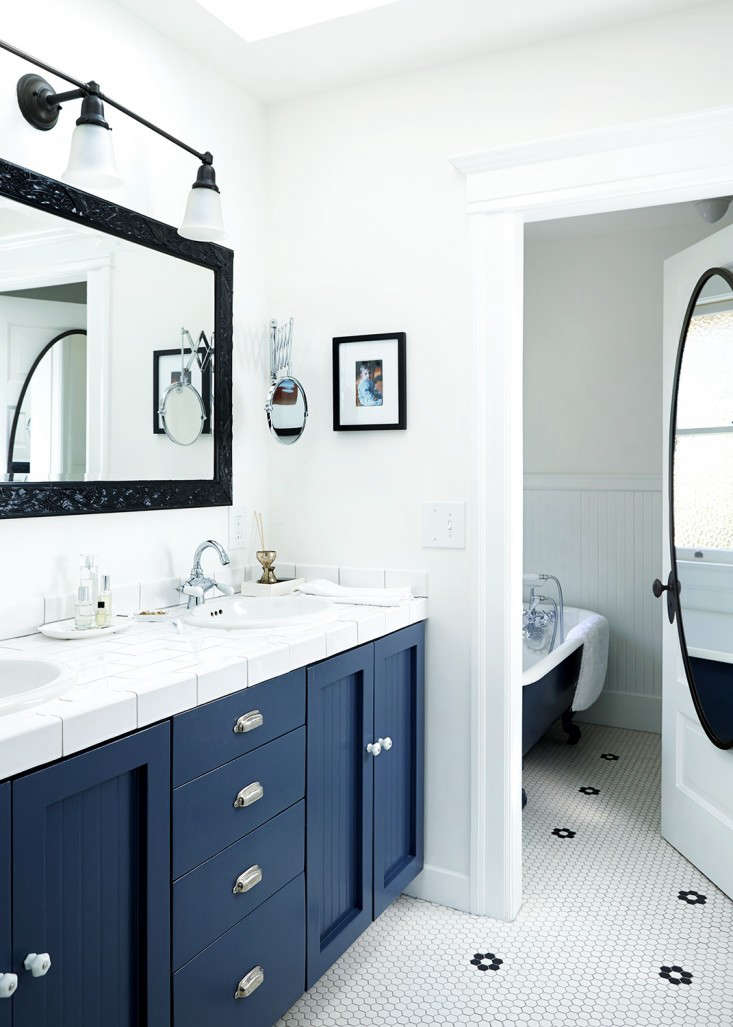 Above: Ayelet found a gilded mirror in an antique store and give it a coat of black paint. The vanity and the exterior of the clawfoot tub are painted in Benjamin Moore’s Hudson Bay. 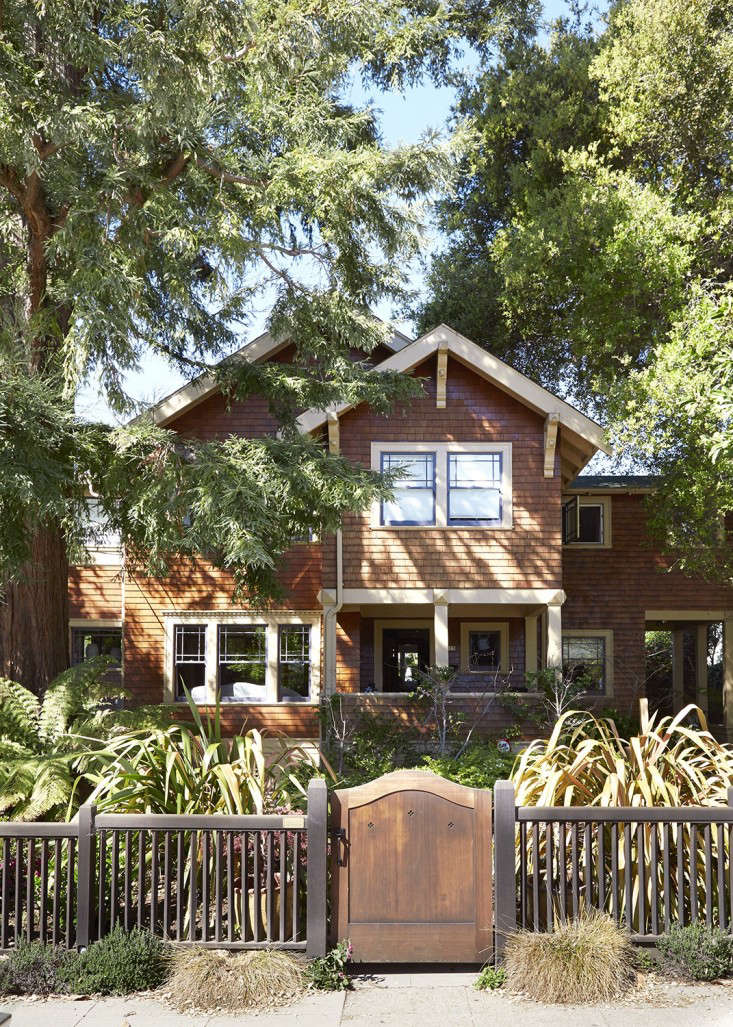 Above: The house seen from the street (look closely and you’ll see that the window sashes are painted a very Berkeley shade of purple).

Ed. note: Remodelista guest writer Lisa Michaels is the author of Split: A Counterculture Childhood and the novel Grand Ambition.

Interested in how other writers live? See A Writer’s Library: Michael Cunningham at Home. Or browse through our gallery of images of Work Studios. And to see Ayelet and Michael’s writing studio, go to The Ultimate Writing Studio, Berkeley Edition.

$185.30 USD from Design Within Reach
Modernica

The Nonchalant Family Home: A No. 555 Design in Utazu, Japan