Last week I had a surprise late-night visitor. I was in bed not wanting to call it a day, so I turned to Instagram, and at that very moment the mysterious @inbedwith.me (“expert on big beds and room service”) signed on to follow me. Intrigued, I checked out her Instagram feed and found exactly the night-owl inspiration I was looking for.

In Bed With is the just-launched site of Melbourne architectural photographer Rhiannon Taylor, who travels almost nonstop for work and decided to capture her favorite accommodations along the way. So far, she’s presented bespoke guesthouses, spas, and resorts in Australia, Indonesia, Mexico, and the US. I like the look of all of them, but I’m particularly drawn to Drift House, a B&B set in a deftly remodeled Victorian in Victoria, Australia–added bonus: It’s on the Great Ocean Road in a seaside town called Port Fairy. Taylor classifies its interiors as “intellectually romantic.”

Photography by Rhiannon Taylor for In Bed With (@inbedwith.me), unless otherwise noted.

Above: Drift House occupies one of Port Fairy’s most well-known historic residences; built in the 1850s, its many past occupants include an undertaker, accordion player, and captain of the militia. Owners Colleen Guiney and Jon Watkinson bought it in derelict condition and traded busy careers in Melbourne (she as a visual merchandiser/stylist, he as a sales and marketing exec) to become innkeepers. Over the course of several years (and many permit battles), they overhauled the property with architect Tim O’Sullivan and his team at Multiplicity design of Melbourne.

Above: Wicker chairs that Colleen found on eBay stand outside the entrance to Suite One. There are four suites in total, two in the original house and two in a new addition. Each occupies its own floor.

Above: The interiors are also the work of Multiplicity in collaboration with Colleen, who sourced the furnishings. Suite One, which occupies the ground floor of the historic house, has a sprightly Scandi palette.

Above: Each suite has a kitchen and living area (plus its own outdoor space). Suite One’s sofa is the Nook by Jardan, the pendant light came from Spence & Lyda, and the green-and-white cotton blanket is a Country Road design. 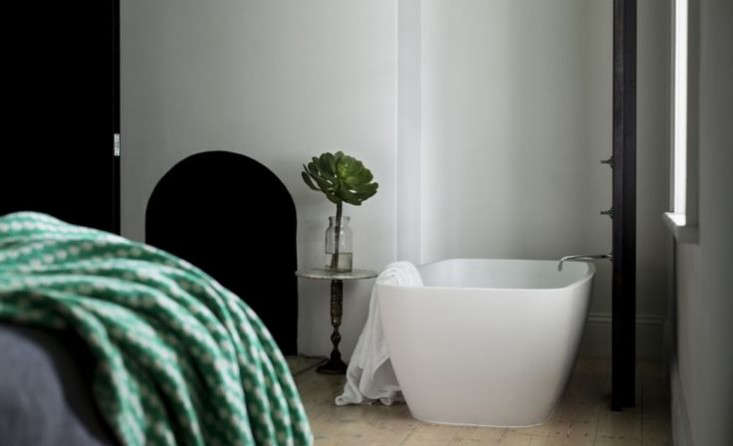 Above: A stone bath from Roger Seller’s Apaiser line is poised next to the bed and fireplace. Photograph via Drift House.

Above: On arrival, guests are delivered a “breaky hamper,” containing, among other things, eggs from a nearby farm (for cooking in the room), locally made yogurt, muesli, jam, and sour dough bread, and the inn’s own lemons and dukka (a spice mix). “We top off the hamper during the stay,” says Colleen. 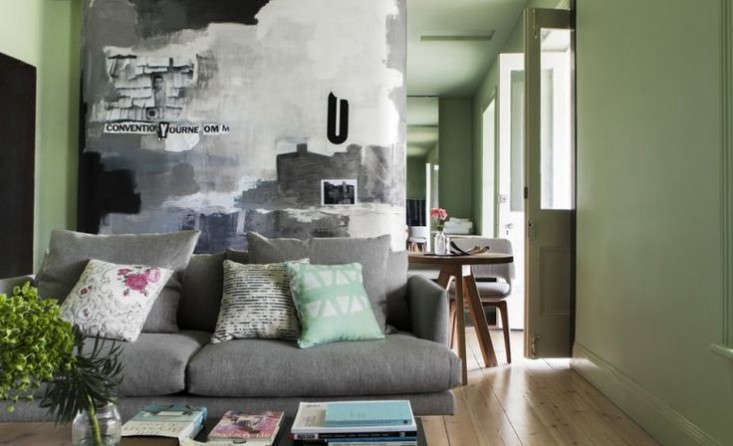 Above: Suite Two has a moody, artist’s atelier vibe. Colleen, who studied art (and formerly built sets and props), contributed the wall mural, which incorporates colors from the harbor and details about the house’s past owners. The sofa is another Nook by Jardan. (Read about Jardan here.)

Above L: The mural wraps around into the bedroom. Above R: The round table is Mark Tuckey’s Tripod design. (We’re longstanding fans of Tuckey’s work; see A Sydney Surfer Sets Up Shop and Steal This Look: Mark Tuckey’s Beach House Living Room.)

Above: The occupants of Suite Two have the upstairs veranda to themselves.

Above: For outdoor dining and people watching. Port Fairy has been singled out as one of the world’s most livable towns. It’s home to famously beautiful stretches of coastline and is also known for its community-organized annual folk festival (this year’s event takes place March 6–9).

Above: Located in the new two-story addition, Suite Three is a white cocoon with slatted partitions built from wood taken out of the old house during the remodel. The painting is by Colleen.

Above: “To be honest, you probably wont leave the room,” says Rhiannon. “Periodicals, books, and movies will have you wrapped up on the couch.”

Above L: Suite Three’s floor-to-ceiling-tiled shower. Above R: A corner of the living room with a wall built from local stone.

Above: Suite Three comes with a private walled courtyard and giant fireplace.

Above: Multiplicity’s finishing detail for the B&B: a backyard pool.

Above: The new addition is sheathed in perforated metal. “When l first saw the building, it reminded me of an old TV series called The Ghost and Mrs Muir,” writes architect Tim O’Sullivan, who chronicles the project (and the permit battles) on Multiplicity’s site. “We came up with the idea of mimicking the original building’s footprint in width and depth, and to sit [the new addition] back about a meter, so that it reads as a ghost of the front building, the silent twin brother who always lurks in the shadows.” The trees are Norfolk Island Pines that predate the original house.

Situated at the end of the Great Ocean Road on Victoria’s southwest coast, Drift House is about a four-hour drive from Melbourne. The B&B overlooks the Moyne River and is an easy walk to the beach.

Traveling in Australia? Take a look at the hotels, restaurants, and shops in our City Guides.

For another of our favorite B&B’s, this one in Tielrode, Belgium, go to Surrealism Included.

Tiled Moroccan Side Tables for a Song