According to our friend Charlie Scott, the one drawback to living in an open loft space is the the lack of a guest bedroom. Imagine his surprise when his sister sewed him a guest bedroom fabricated from canvas.

An extensive traveler and founder of Trufflepig (a trip planning company), Scott had "couch-surfed" around the world for years, and his 1600-square-foot loft was the first stopover for many of his friends on their way through Toronto. In passing one day, he mentioned to his sister, artist Sally Scott, that it would be nice to be able offer his guests some privacy. Sally’s Christmas present to her brother that year was a custom-made canvas tent; big enough to accommodate a camp bed, a side table, and a chair. Voilà—an instant guest bedroom. For more information, contact Charlie Scott. 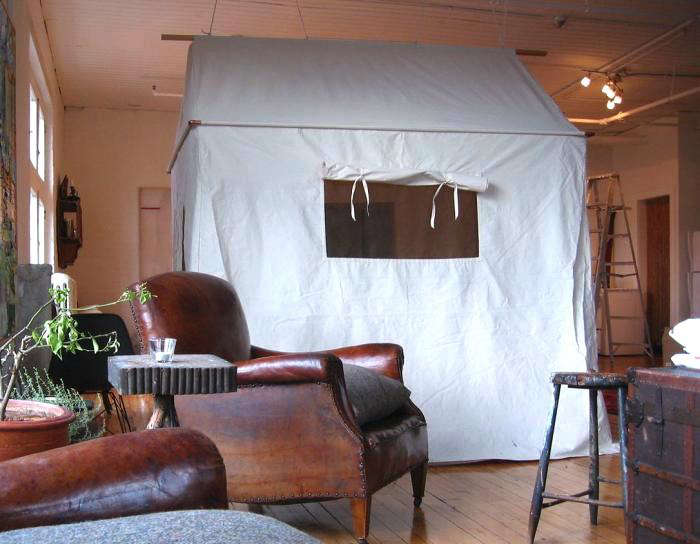 Above: The tent has three operable flaps; one on each side and one in the back. 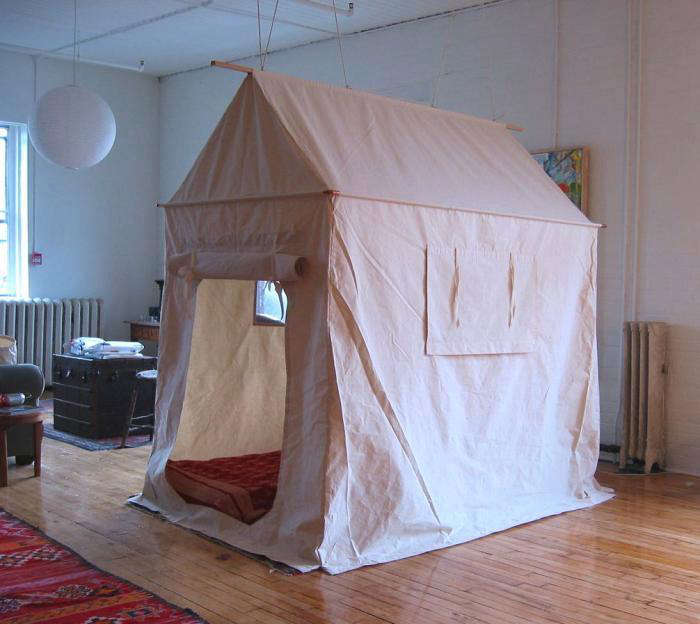 Above: The tent was designed and fabricated by Sally Scott. It has two structural members; a wooden rod threaded through the top creates the roof pitch and copper piping with elbow joints provides a rigid rectangular frame. When guests leave, the tent can be taken apart and stored away in minutes. 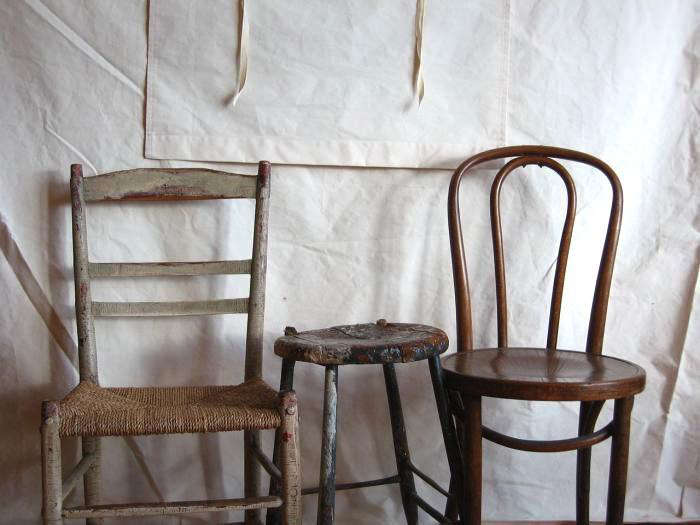 Above: The canvas fits in well with the rest of Scott's décor. 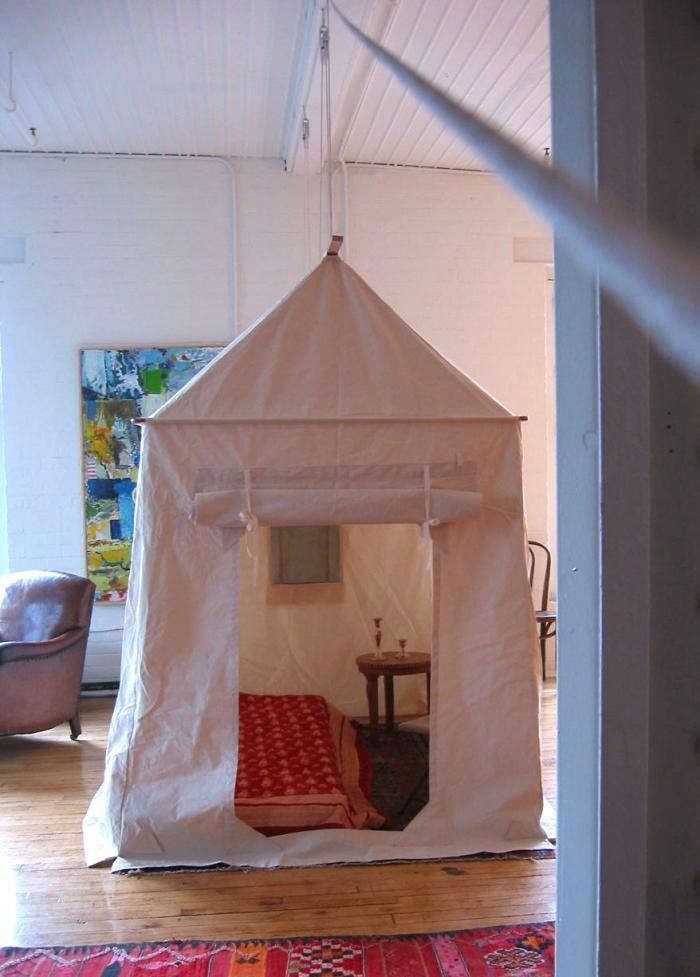 Above: The tent is hoisted up by a simple pulley system, which is attached to the ceiling. 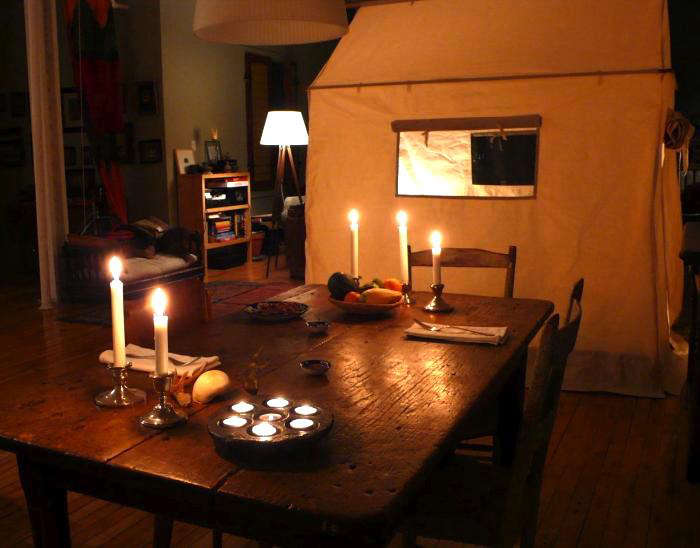 Above: At night, the tent emits a warm glow, providing a cozy backdrop to a candlelit dinner; the ultimate in sophisticated camping. 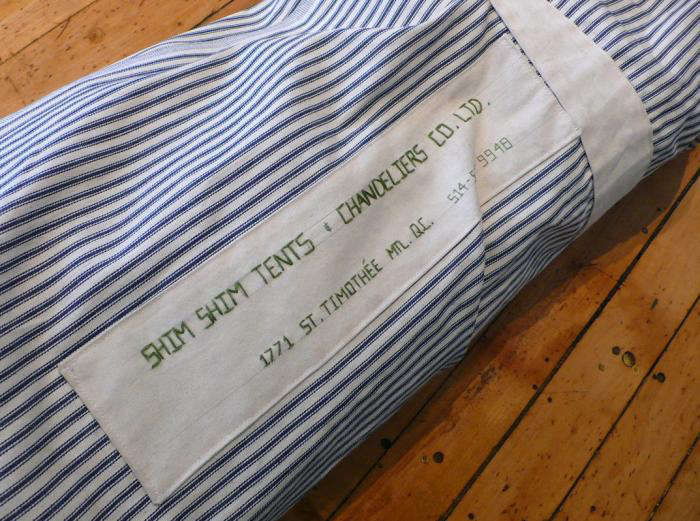 Above: Sally Scott sewed the case for the tent out of ticking fabric and hand-embroidered the label. "Shim Shim Tents" is a family joke shared by the siblings. "Our father was a building contractor who often worked on old Canadian houses," says Scott, "A shim here and a shim there were his favorite words."

Do you share our obsession with canvas? See 106 Canvas images in our Gallery of rooms and spaces.

Steal This Look: A Cottage-Style Bunk Room in Highgate, London

Kitchen of the Week: A Modern Barn Conversion in the English Countryside