Downstairs at the new Ace Hotel in LA, all is civilized (and inspiring – have a look around). But take the elevator up 14 stories to the rooftop lounge, where the music is playing and a bar and pool await, and things really get going. We visited on a recent Monday at 5 pm and the place, though only open since January, had been fully discovered. It’s the spot to take in all of downtown. 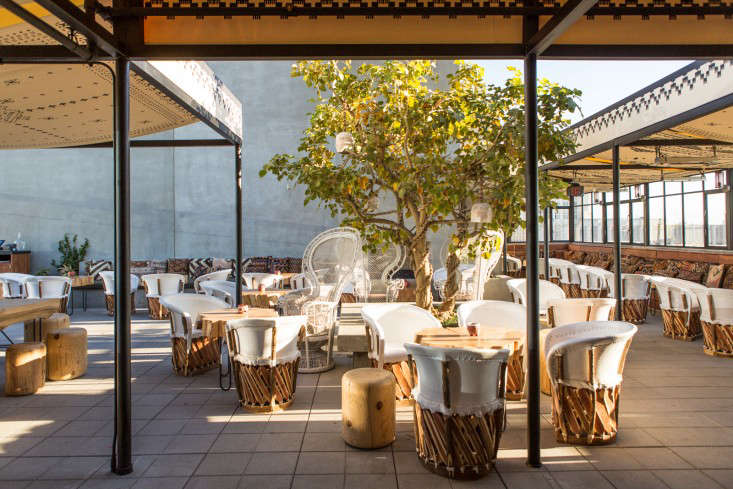 Above: The new Ace Hotel in LA occupies the 1927 Spanish Gothic United Artists Building, back in the day the tallest tower in the city. The Upstairs cocktail lounge is literally the height of downtown — and the place to take in the city lights and transforming neighborhood. LA design firm Commune, a member of the Remodelista Architect/Designer Directory, oversaw the tower’s transformation from top to bottom. The potted tree is a coral tree hung with ceramic lanterns by Adam Silverman of Atwater Pottery. 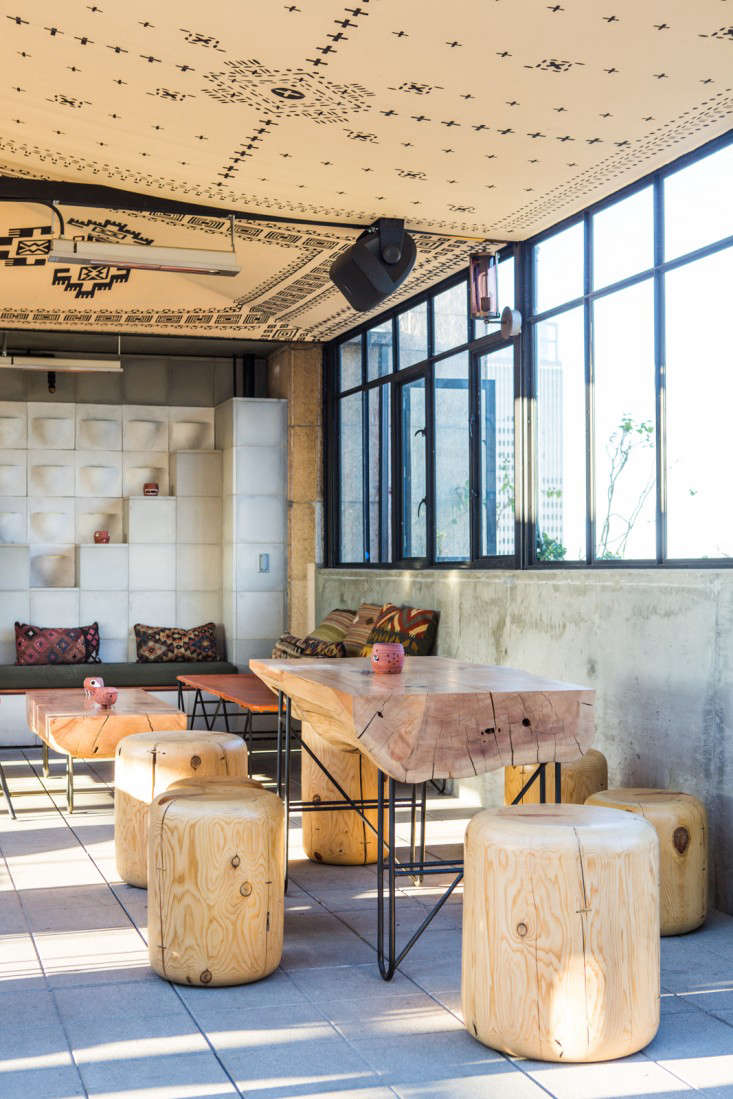 Above: Commune’s use of concrete tiling in the lounge and pool was inspired by Frank Lloyd Wright’s Ennis House, one of four concrete block houses Wright designed in LA and a setting in Blade Runner. The alcove at the end was created by LA ceramicist Kevin Willis and features pocketed concrete tiles that are brass-lined and hold flickering candles. 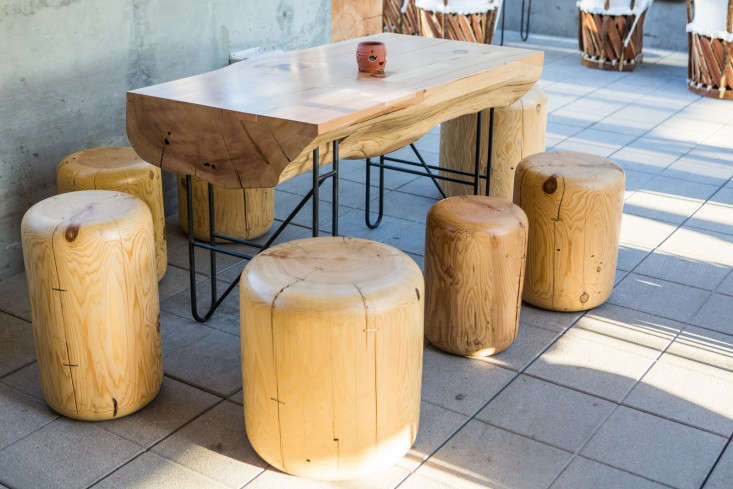 Above: The hotel is filled with the work of local artists, including Joshua Tree sculptor Alma Allen, who created the tables and stools from pencil cedar (the table legs are hand-forged steel). Allen’s work is in this year’s Whitney Biennial (here’s a Whitney video of him talking about his art in his indoor-outdoor studio); other examples of his Wooden Stools are available from Commune’s online shop. 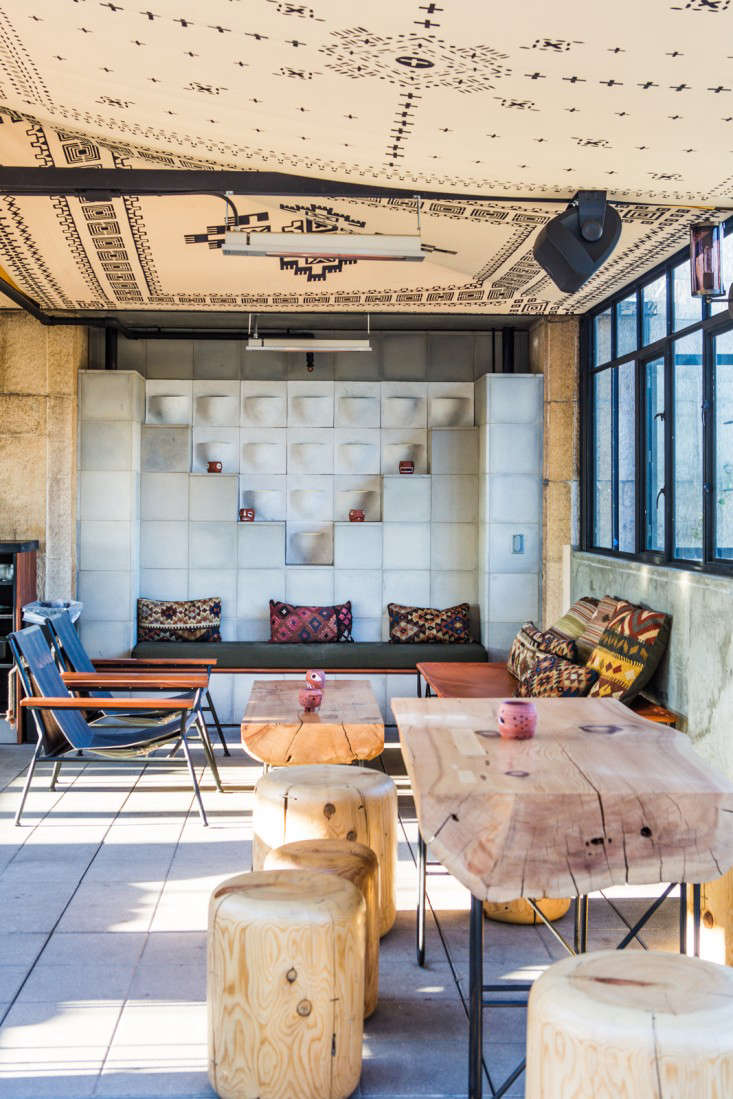 Above: The bar is run by LA Chapter (of Brooklyn’s Five Leaves fame); the group also operates the equally great-looking brasserie off the hotel lobby – see Downtown LA’s Splashiest New Restaurant. Tables on the open deck are protected from wind and weather by a concrete wall with steel-framed windows and an awning by LA artist and girl about town Alia Penner. 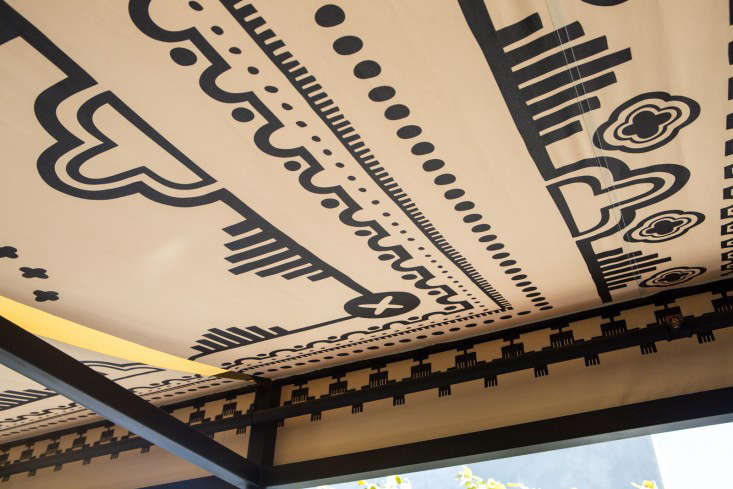 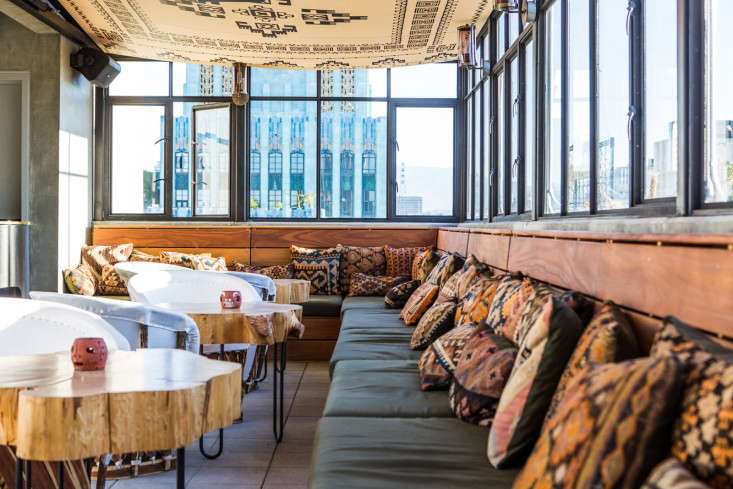 Above: Banquettes are lined with Commune’s signature cushions made from reclaimed kilims. 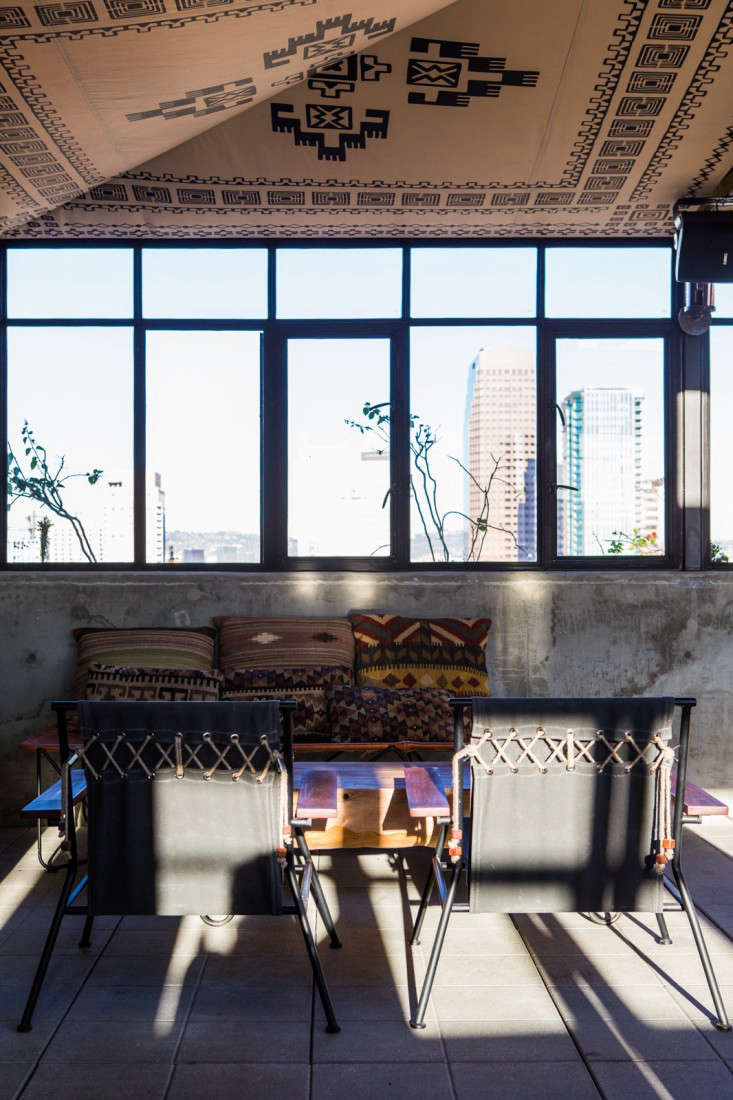 Above: All of the Ace hotels have furniture that makes clever use of canvas – a nod to the chain’s practical-chic approach to design. “We like its durability and honesty,” says project designer Roman Alonso of Commune. Here, steel-framed chairs by Jamey Garza of Marfa, Texas, are slung with laced gray canvas. 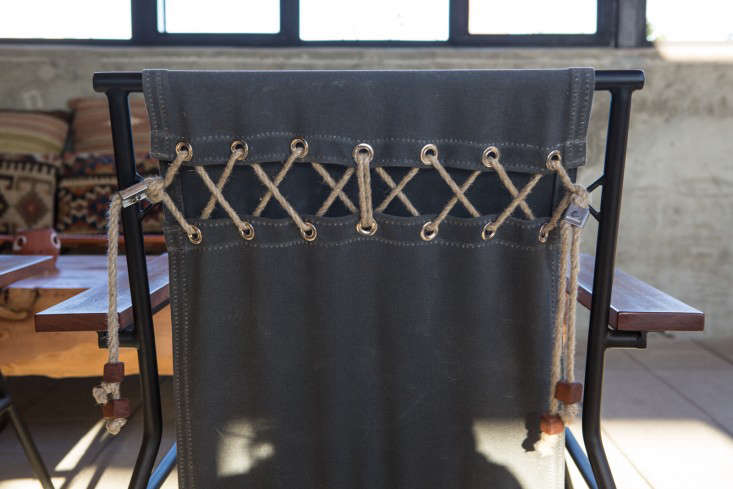 Above: The canvas lacing is both functional and decorative. 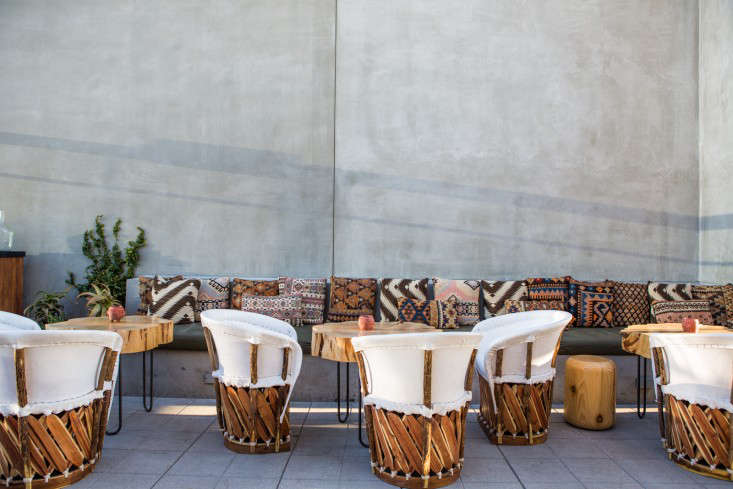 Above: Commune introduced Mexican designs throughout the hotel, including classic Equipale chairs updated in white-painted leather. 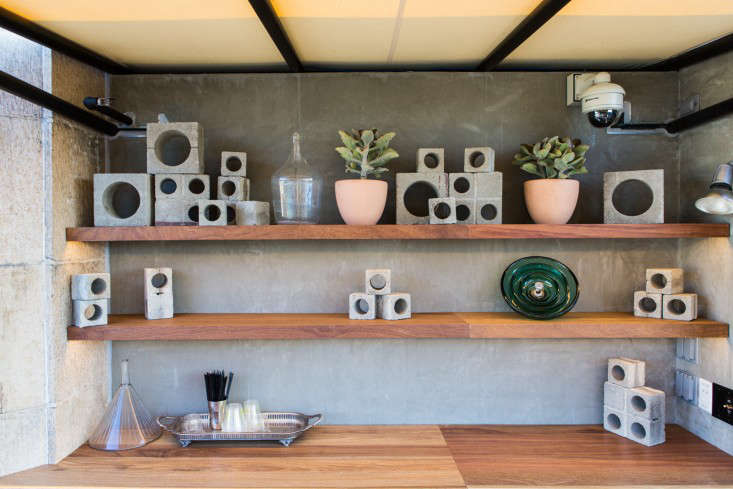 Above: The pool bar has open shelving of cumaru, a type of teak, decorated with concrete blocks. 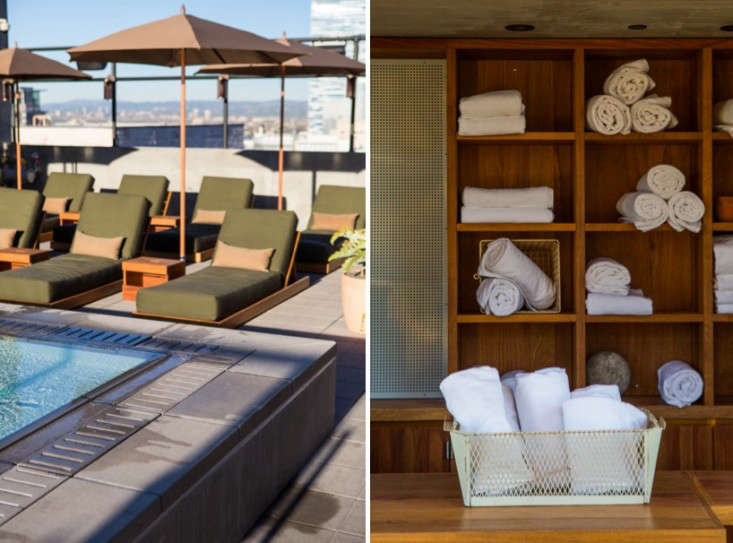 Above L: Custom teak poolside lounges are upholstered in army green Sunbrella fabric. Of the pool design, Roman Alonso says, “We were inspired by Ennis House and by Donald Judd’s pool in Marfa. We wanted something simple and straightforward and modernist in feel.”  Above R: Towels are stored in shelving made from cumaru wood. 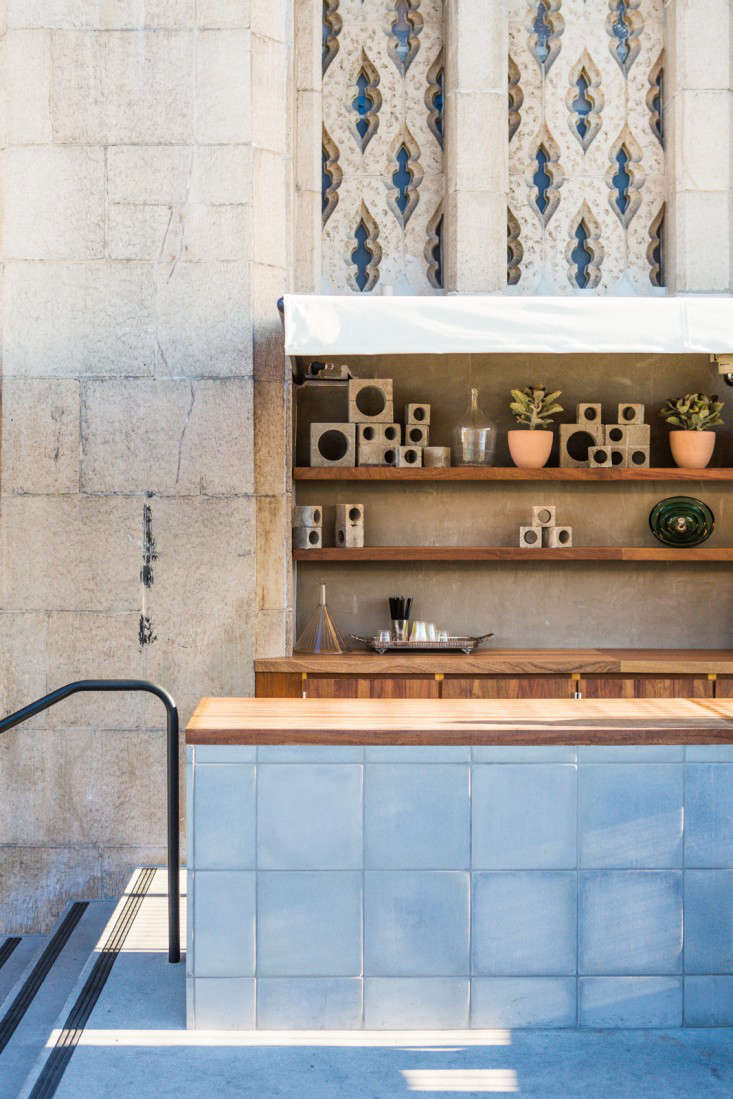 Above: The building’s original Spanish-Gothic detailing has been well preserved. Join us for a full tour of the hotel, and learn more about Commune’s approach to design in our Q & A with the firm.

We’ve loved and visited all of the Ace’s outposts; have a look at our Ace Hotel posts. And on Gardenista, check out the Ace’s new tropical outpost in Panama City.

The Ace Hotel Downtown Los Angeles is at 929 South Broadway:

A Classic Reimagined: The New T14 Chair from Tolix