Is Ochre the home furnishings version of Chanel? We think so. It's hard to pin down why, but somehow their designs hit just the right note; classic yet forward-looking, subtle yet glamorous, formal yet nonchalant. Want proof? Join us on a tour of Ochre designer Solenne de la Fouchardière's Paris flat in Montmartre.

“This 800-square-foot flat serves as a foothold when we are in Paris," says de la Fouchardière, a partner at Ochre. "We wanted to create something stylish, clutter free, and functional (more jeans than silk) for our short stays,” she says.

N.B. For more on Ochre, the home furnishings brand that Harriet Maxwell, Johanna Bibby, and de la Fouchardière started in in 1995, go to Harriet Maxell and Andrew Corrie of Ochre in NYC. 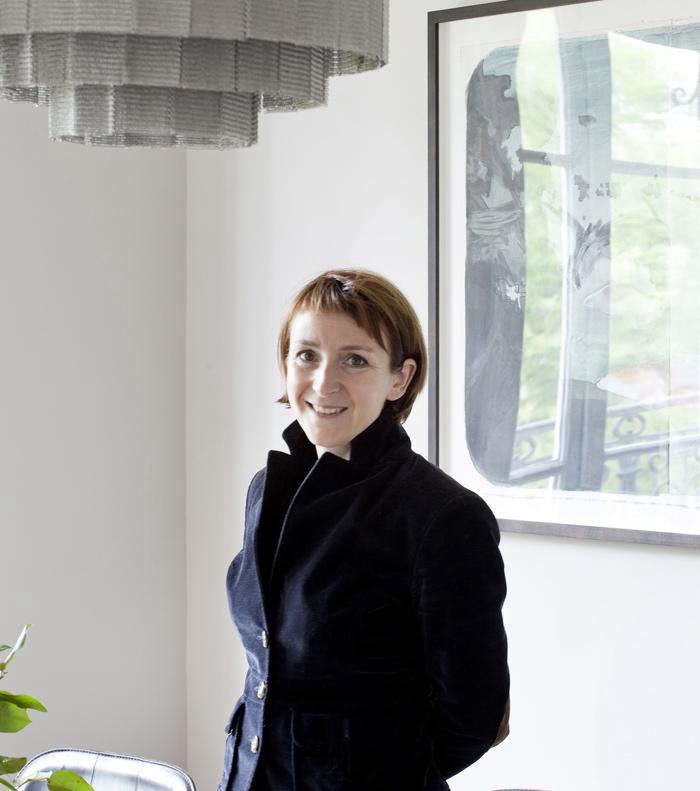 Above: Ochre designer and partner Solenne de la Fouchardière in her light-filled Paris flat in Montmartre. 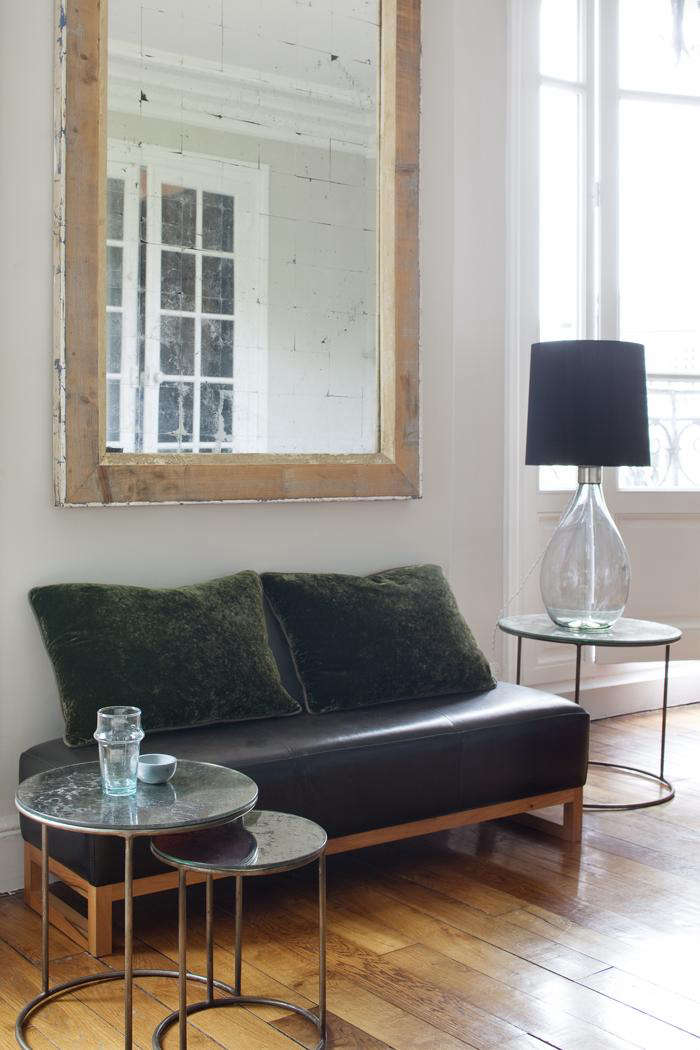 Above: Ochre updates the design of the classic French verre églomisé mirror with repurposed scaffolding, while a small sitting area is created with a small Daxie Ottoman bench in bleach leather, a set of Moon Tables, and a Cherub Table Lamp in smoke with a black silk shade. 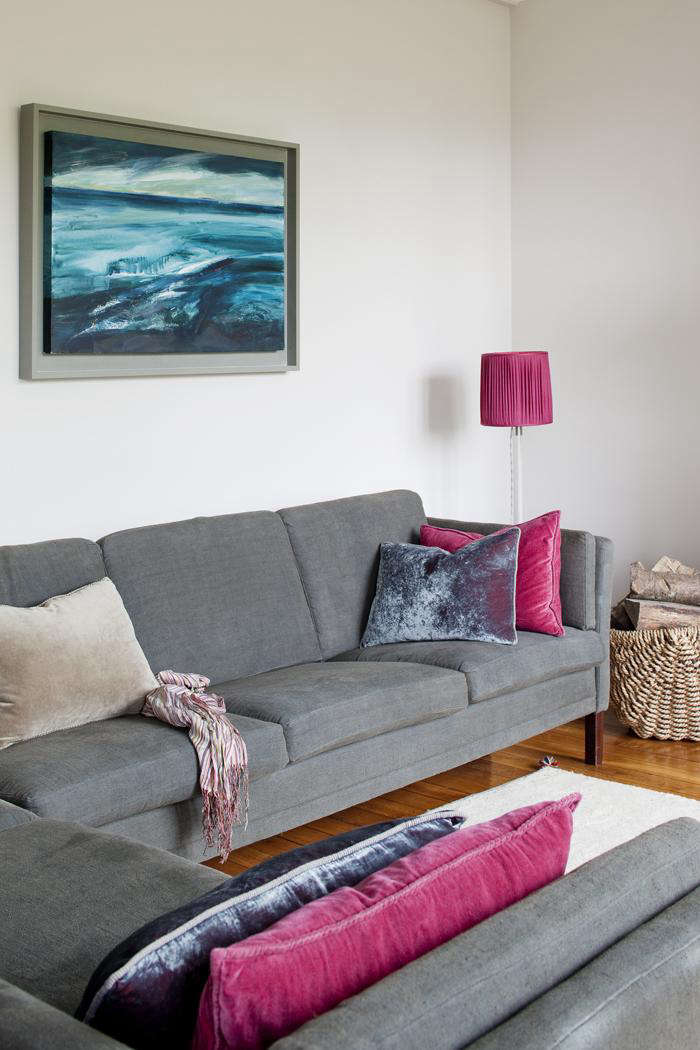 Above: A vintage Danish sofa has been reupholstered in Desert Cloth Charcoal by de la Cuona. Bright colored velvet cushions from Caravane in Paris add to the relaxed glamor. An Axis Mundi Table Lamp is dressed with a red silk vertically pleated shade. The painting by Liz McDonald is of a beach in Devon. 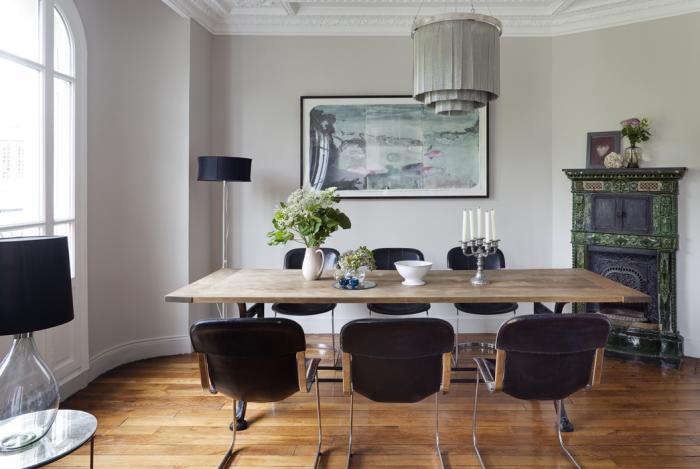 Above: The Chain Mail Chandelier by Ochre hovers above the Les Puces dining table and chairs while Axis Mundi Floor and Cherub Table lamps with black silk shades flank the sides. The enamel and steel fireplace is original to the flat. 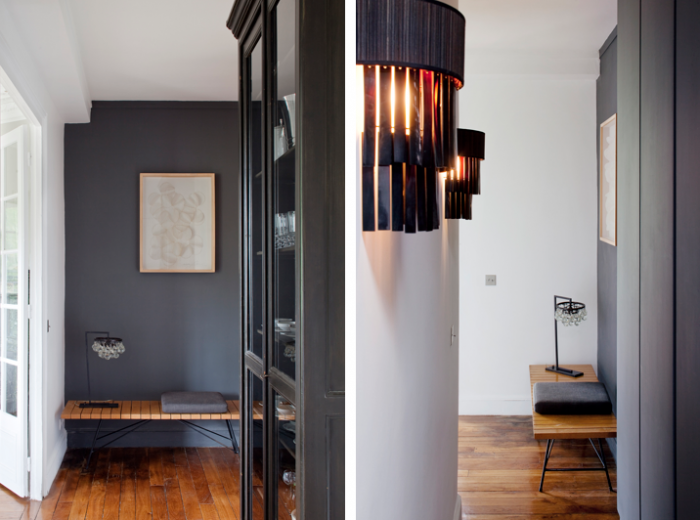 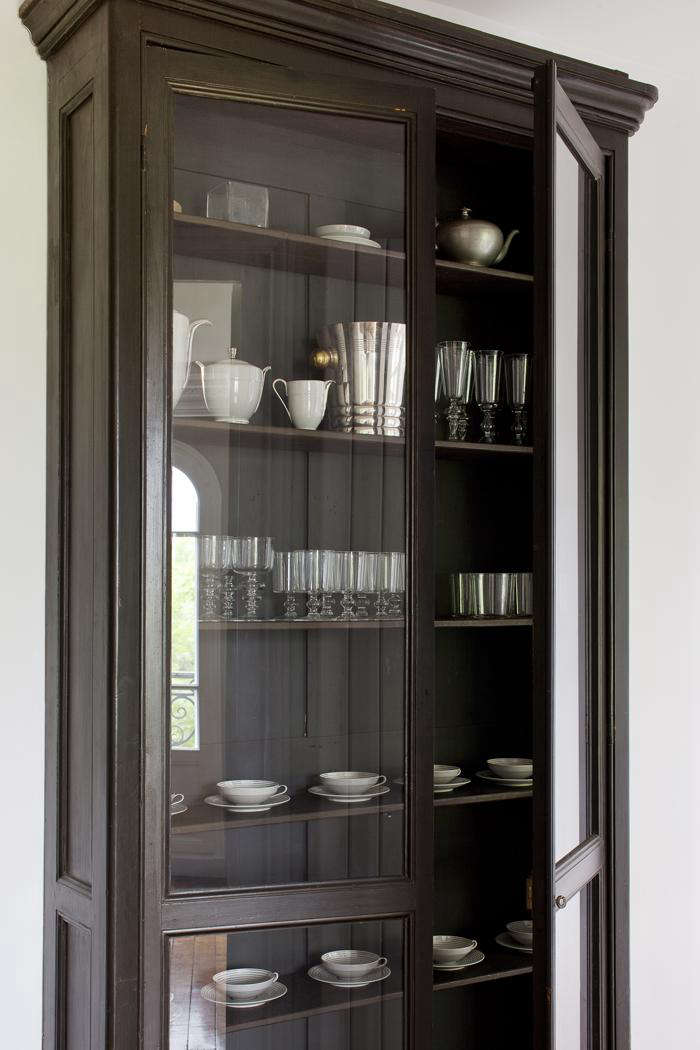 Above: A wooden dresser purchased at the famous Clignancourt flea market holds glass and tableware from Astier de Villate and Christiane Perrochon mixed with silver and porcelain gifts from the designer's family. 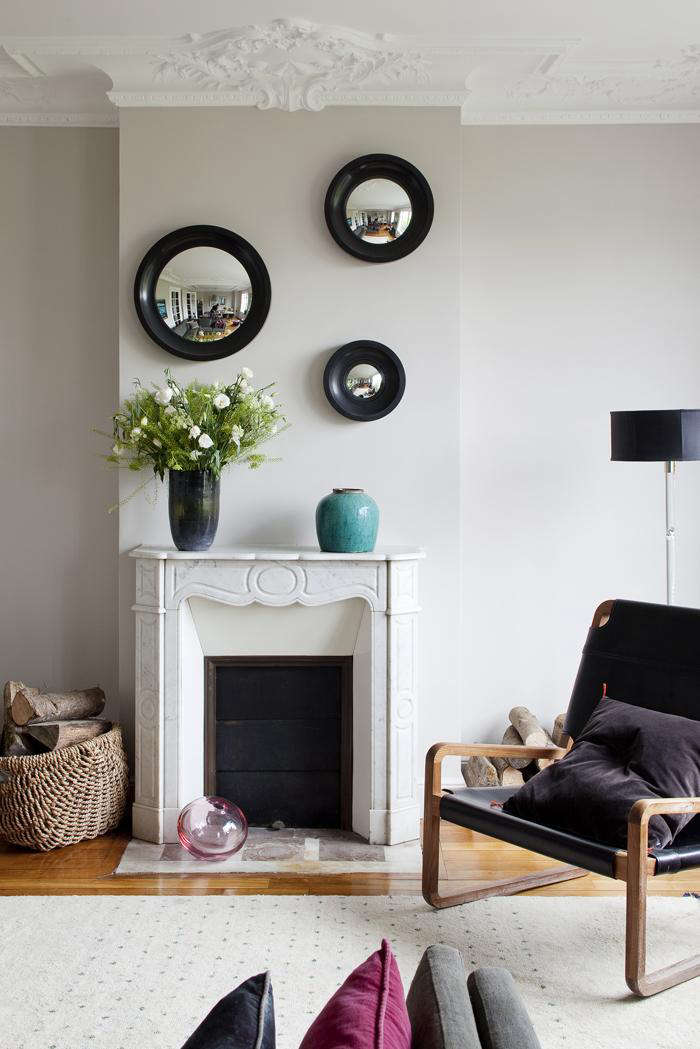 Above: The graceful but functional Zefirelli Chair and the Convex Black Bole Mirrors over the mantle are understated in their strength. 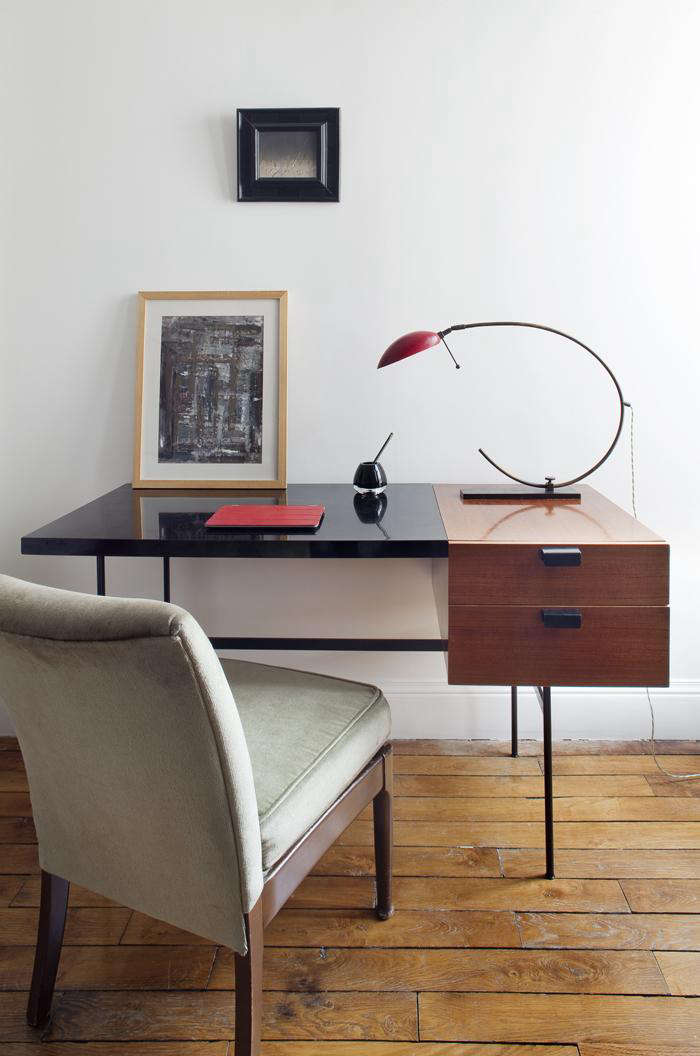 Above: The designer created an elegant work area with a desk by midcentury French designer Pierre Paulin juxtaposed with an Ochre Scorpion Lamp. 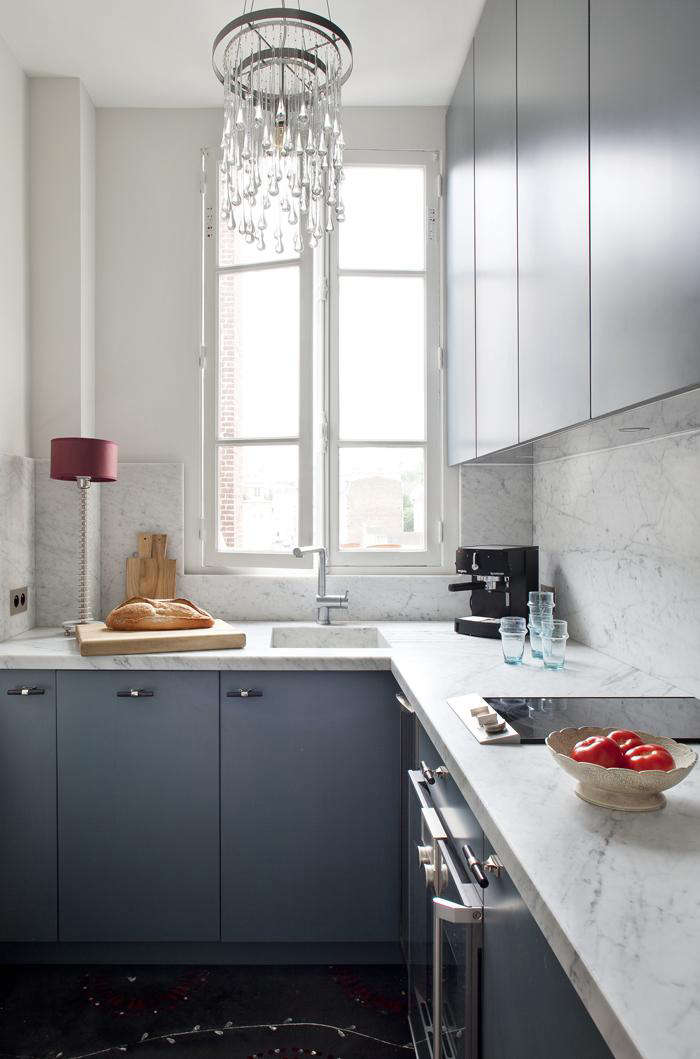 Above: The small functional kitchen with its marble work surfaces gets a dash of glamor with the Light Drizzle Chandelier and the Maasai Lamp. 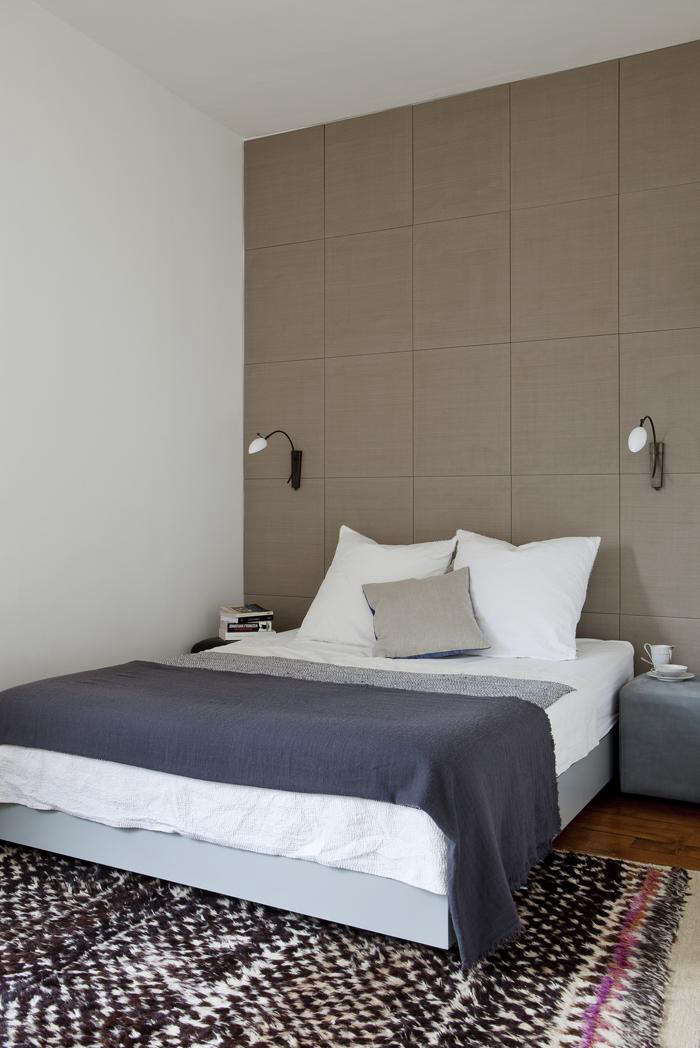 Above: Scorpion Wall Lights perch on the fabric wall panels in the master bedroom like delicate earrings. The textured rug is from Caravane. 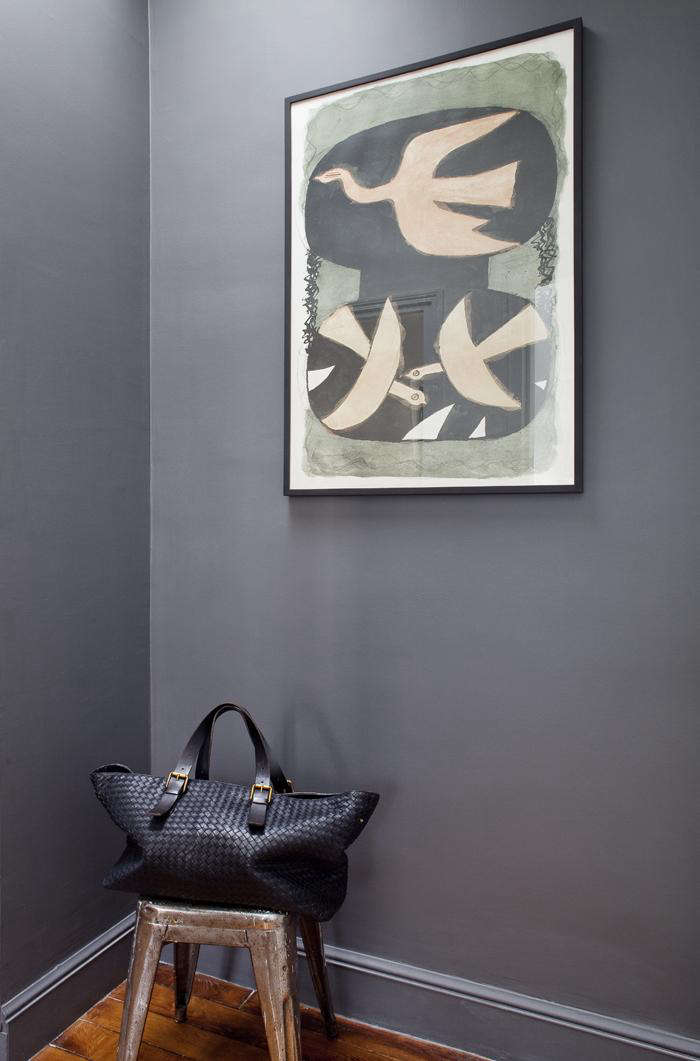 Above: A print by Braque adorns a corner of the bedroom. 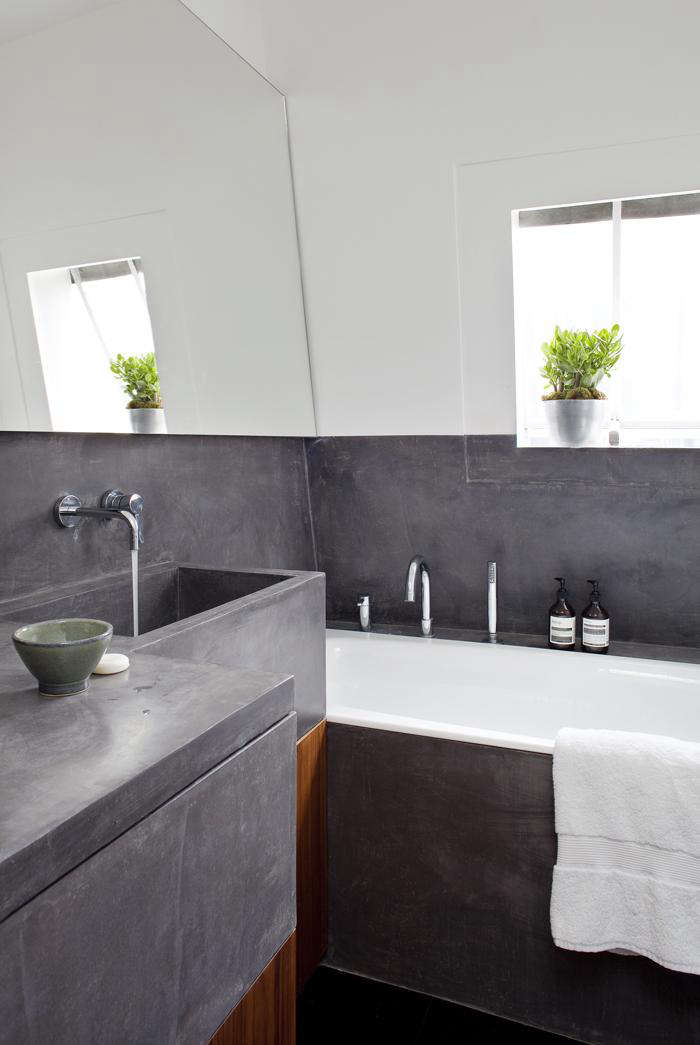 Above: Concrete walls and walnut cabinets create a rough-luxe finish in the bathroom. De la Fouchardière worked the architects Fritz Associates to change the layout of the flat, which she purchased from an older couple who had lived in it for thirty years. 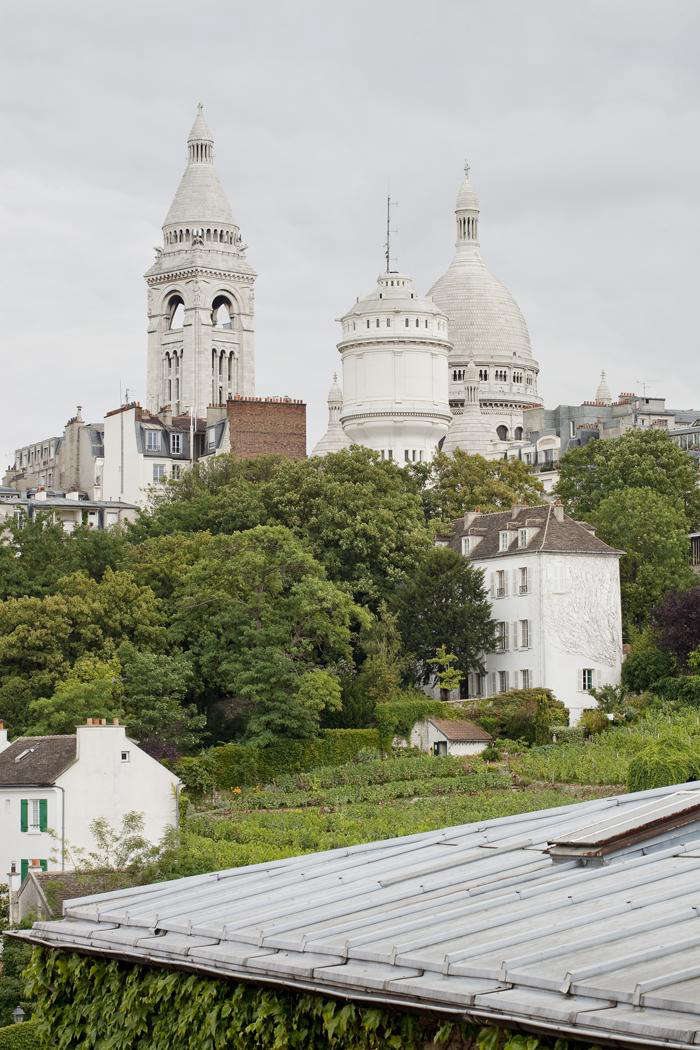 Above: De la Fouchardière's view from her top floor flat is of the Sacré Coeur and its vineyard. "The building is a typical Parisian Haussman style with a long west facing balcony, showcasing the most wonderful sunsets," she says.

N.B: Curious about how the Ochre style translates into New York City living? See Harriet Maxell and Andrew Corrie of Ochre in NYC.

Nomibis: A Vintage Shop in Reims, France, Shoppable on Instagram

Object of Desire: Whimsical Painted Plates by a French Ceramicist