From his Tokyo studio, Fujishiro is quietly–and brilliantly–reinventing the lampshade, the storage basket, and other household basics. A designer who came to his career as a directionless teen with a passion for vintage sneakers, Fujishiro studied economics at a Tokyo university while moonlighting as a student at the Kuwasawa Design School. He got his first job as a waiter at the cafe inside edgy Tokyo furniture gallery IDí‰E, where he eventually was discovered and put to work as a designer.

He now has his own small studio and cult following. “I always make something by myself and then show it to a company. If the company doesn’t want it, I produce it on my own,” he says. “I like to find different ways to use things that are familiar, for example paper for stools and lampshades, and rope for baskets.” Hermés recently commissioned Fujishiro to create objects out of the company’s production scraps, and he has a new Adidas sneaker debuting in February. Christina Kim of Dosa, among others, is a fan. As she told us, Fujishiro’s repertoire is small, but he’s definitely one to watch. 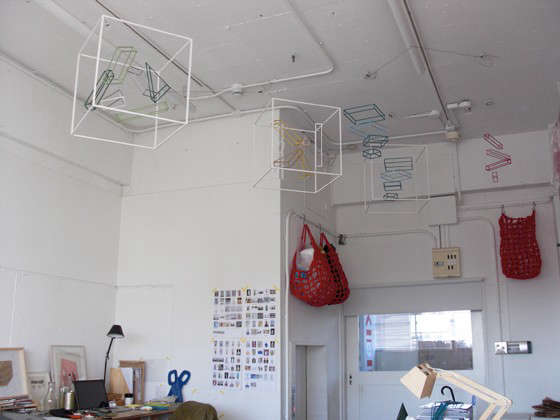 Above: Shigeki Fujishiro’s Tokyo studio is furnished with, among other things, his prototype for a plywood desk lamp, as well as knotted baskets and kinetic mobiles.

The three-legged Eiffel Stool is made of a durable heavy paper that consists of pulp and recycled paper. Packaged flat in a small box, it requires assembly and uses a series of Eifflel Tower-inspired trusses for reinforcement. “The stool is designed in a minimal manner, so the structure itself becomes the form,” says Fujishiro. Above L: A drawing of the stool by artist Philippe Weisbecker. Above R: The Eiffel Stool is available in brick or gray for $130 from Tortoise, an offshoot of Tortoise General Store in Venice, CA. Not coincidentally, it was Tortoise’s co-owner Taku Shinomoto, former design director at IDí‰E, who gave Fujishiro his first official design work. In Europe, the Eiffel is also sold by RS Barcelona; €60 (N.B.: the shop also offers an aluminum version of the design in bright colors and in adult and kid sizes. 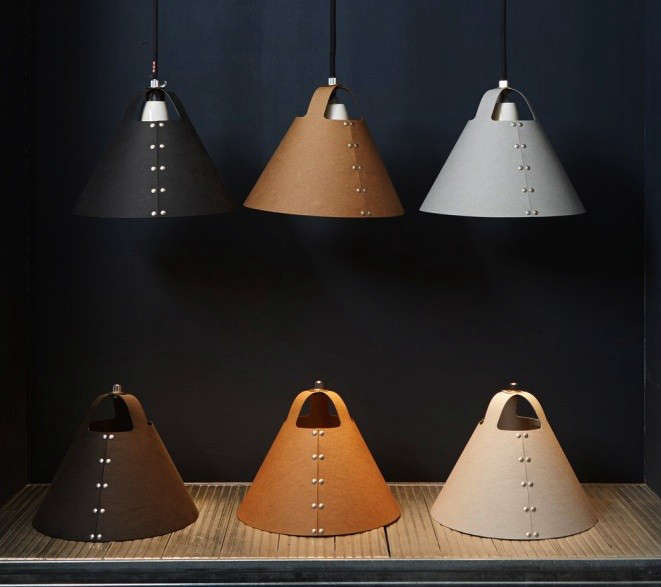 Above: Merci in Paris is one of the only stores outside of Japan that carries carries the Rivet Shade; it’s available in black, brown, and gray for €89.

The Rivet lampshade consists of a single piece of vulcanized fiberboard, a material made of wood pulp and cotton that’s typically used for electrical insulation. Above L: It hangs over Fujishiro’s desk. Above R: The Rivet Lamp can be ordered from UK shop Folklore for £75.

Above: Hanging on his apartment wall alongside some of his drawings, Fujishiro’s latest design to be put into production is Bend, a deceptively simple looking plywood-framed mirror made by Japanese company Ichiro Design. 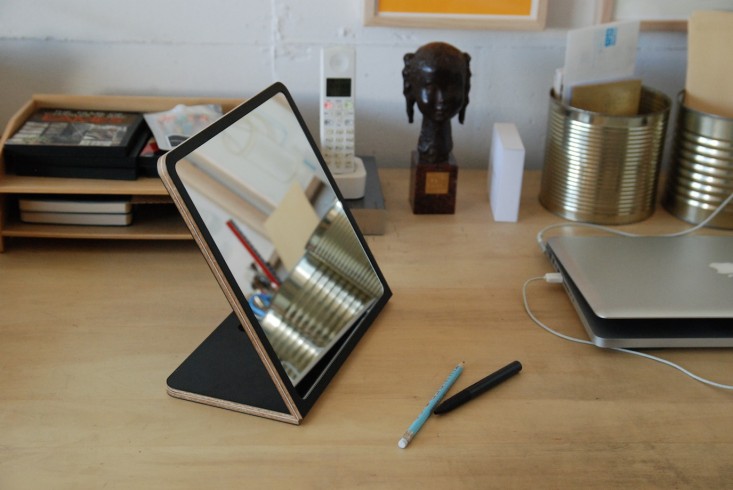 Above: Thanks to inset canvas that serves as a hinge, the Bend frame folds and stands on its own. It comes in two sizes and four laminate colors and is available from Ichiro Design; ¥8,400 small and ¥10,500 large. To inquire about ordering or request a list of shops that carry the design, email [email protected]

Above: The perfect catchall for laundry and firewood, among other things, Fujishiro makes his Knot Basket from a single length of bright rope. The idea for it, he says, came when he saw a picture in the 1978 book High-Tech that shows metal bike baskets being used as wall containers for kitchenwares and fruit. He turned to another vintage book to learn rope work. The Knot Basket can be hung or used on the ground; it comes in two sizes and is available from Tortoise; $250 small, $300 large.

Above: Much of Fujishiro’s work crosses the line into art–the happy result of not having any bosses to answer to. His Frames are mobile-like structures made of hinoki, Japanese cypress wood, that are designed to hang in groups from transparent string so they appear to be floating. They’re available from Fujishiro’s own online shop; the blue set of four is ¥36,750, the red is ¥28,350. They’re also available from Tortoise; $400 (red) and $450 (blue).

Did you miss our recent week devoted to design in Japan? Go straight to Autumn in Japan. Also have a look at The Outsider’s Guide to Tokyo: 10 Cutting-Edge Cafes, Shops, and Restaurants.

In collaboration with: DIY: A Woodland Holiday Party (Indoors)

In collaboration with: Steal This Look: The Bath in Black

by Remodelista Team
May 5, 2021
Read all recent posts