Designer Samu-Jussi Koski is refining the new Finnish aesthetic through his fashion label, Samuji, which he launched in Helsinki three years ago. Style in Finland, Samu explains, is informed by its locale, sandwiched between the ultra-minimalist style of Swedish design and the heavily-patterned folk prints of Russia. “This combination is even seen in Marimekko,” he says, referring to the textile and design house that has put Finnish fashion on the map since 1951. Samu began his own career at Marimekko, first as an assistant designer and later creative director. “Marimekko has defined fashion in Finland for so long,” he says. “There was a time when I was working there that the company was selling 80 percent of its product within Finland: everyone in Helsinki was wearing Marimekko.”

In 2011, Samu ventured out on his own and started with the basics. “I wanted to create a complete wardrobe, and asked all my friends what they would choose if they could only have ten pieces of clothing. Almost every one of them said the same thing: a perfect T-shirt, a pair of jeans, a black dress, the perfect knit. So I began from there.” Each collection is divided between classic silhouettes and what Samu calls his “Seasonal” works–in which textures and prints emerge based on a feeling and set of current inspirations. When asked what defines Finnish fashion, he replies, “For us, everything should always be functional. It’s about having a love of necessary things.” 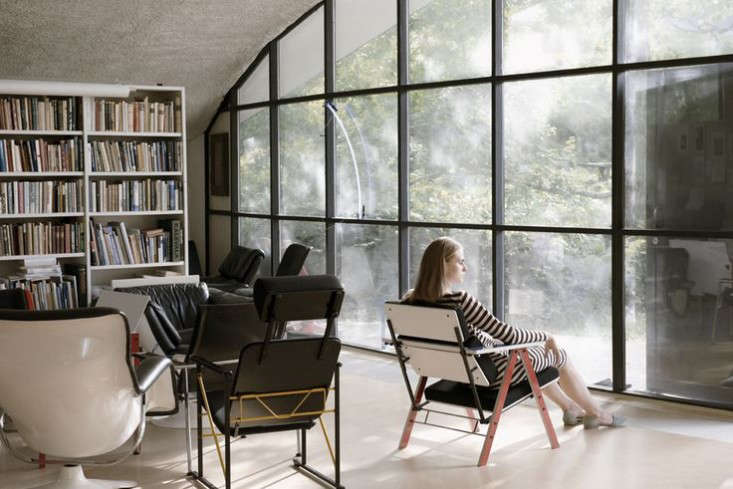 Samu is a fashion designer interested, he says “in almost everything but fashion.” He grew up in Muurame, just north of Helsinki, the hometown of architect Alvar Aalto, whose many buildings define the region. Samu’s approach is holistic, and he draws much of his inspiration from sculpture, painting, and architecture. “I don’t feel very comfortable in the fashion scene as it is now; I’m always eager to collaborate with other worlds.” In addition to fashion, Samu has worked on collections for Iittala and Artek, and he is designing a line of Samuji housewares for fall. 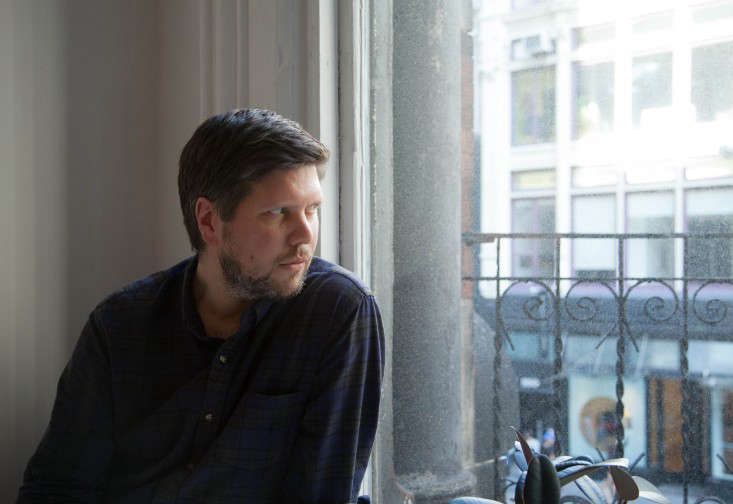 Above: We caught up with Samu during his recent stay in New York to discuss his personal style. Photograph by Alexa Hotz for Remodelista.

Remodelista: How would you describe your look?
Samu-Jussi Koski: When I was younger, I went through every possible style and phase, so now I’m over that game. My personal style is quite boring actually–my friends call me “old papa” or “papito” because I remind them of an old Italian grandpa. 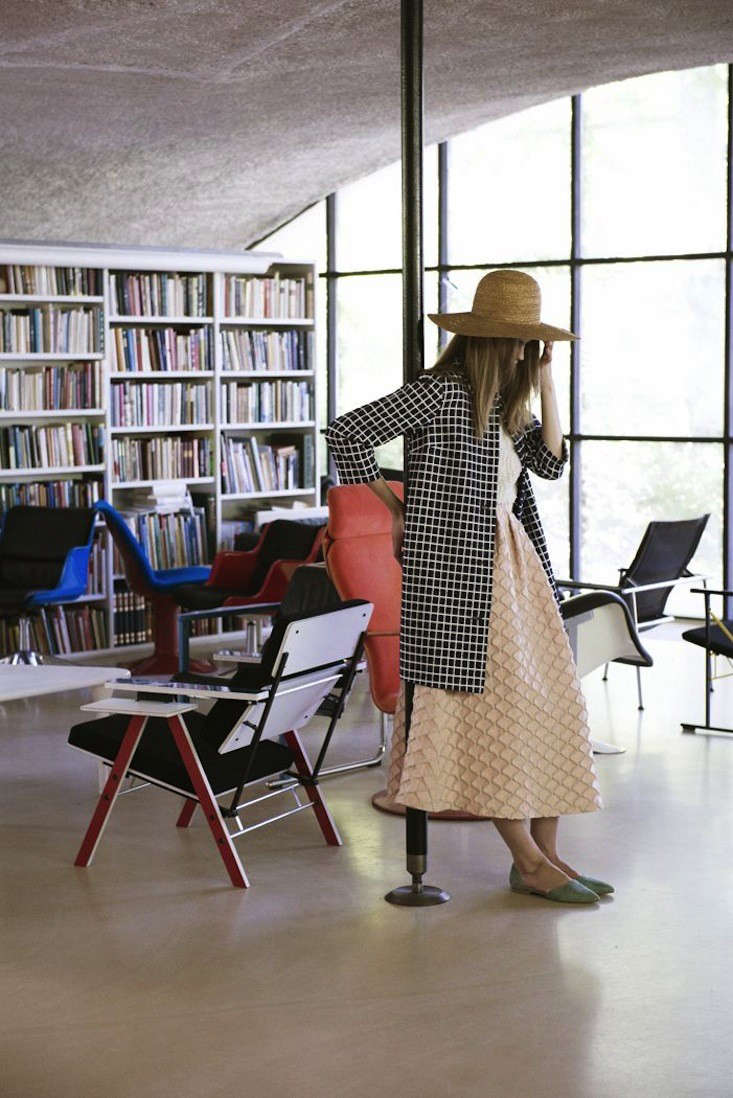 Above: Another view of Yrjö Kukkapuro’s atelier. Shown here, the salmon-colored Damira Skirt from Samuji’s spring Seasonal Collection. All of Samuji’s clothes are designed in Finland and sustainably manufactured in Europe.

RM: What season works best for you?
SK: Summer, but in Finland we are so lucky to have all four seasons, so in a way, I love them all. The magnitudes could vary though: I would take a longer summer and the winter could be done in just a month or two.

RM: What are your summer wardrobe staples?
SK: I love to change sandals, and prefer them handmade of quality leather. The simpler the better. Lately, I’ve been into those Jesus-like strap sandals–the ones made by Francesco Da Firenze in Florence, for example. Those are great. 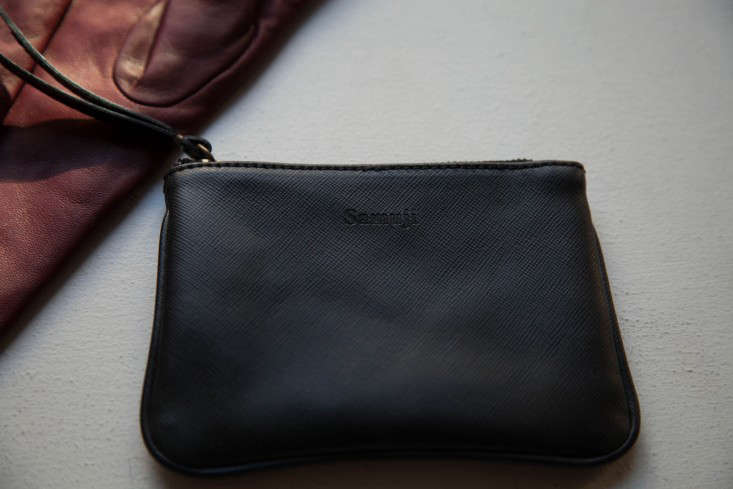 Above: Samuji’s Leather Gloves and Vene Purse, both made in Italy. Photograph by Alexa Hotz for Remodelista.

RM: Wardrobe maintenance tips?
SK: Get your accessories made from quality leather; that way they’ll only get more beautiful as they age and wear out.

RM: Favorite scent?
SK: I love all the natural fragrances: tuberose, gardenia, jasmine, lily of the valley. And not just the more feminine fragrances, but masculine, too, like leather and gasoline (both of which are in Santa Maria Novella’s Nostalgia cologne). I also carry with me a small bottle of Chanel No. 22; it’s an old bottle–Chanel used to be made from non-synthetics. 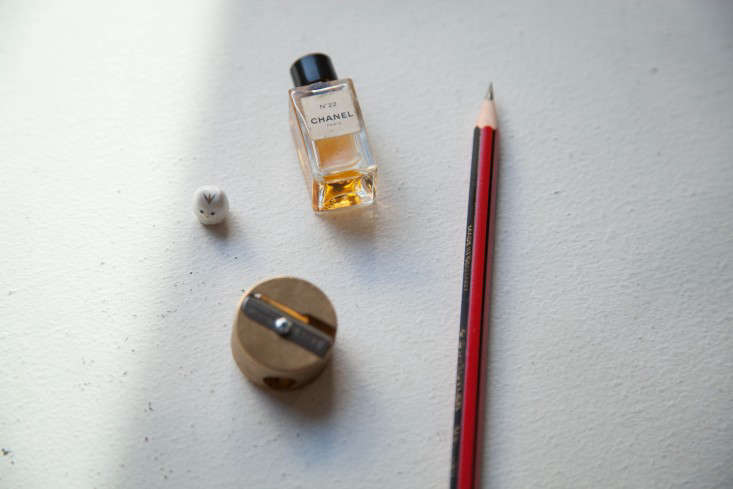 Above: A few of Samu’s essentials, including his Japanese ceramic good luck owl. Photograph by Alexa Hotz for Remodelista.

RM: What’s in your bag? What do you travel with?
SK: First there is my little Japanese owl, or fukuro statue. The word fukuro can be written in different kanji characters to give it different meanings, such as “luck comes” or “no hardship or suffering.” I carry it as a luck charm with me wherever I go, and I’ve given these statues to everyone at Samuji. Then there is my pencil and brass sharpener; I always draw with a soft pencil–it should be 2B or 4B, really dark and messy. It’s important to me to do the first design sketches by hand. 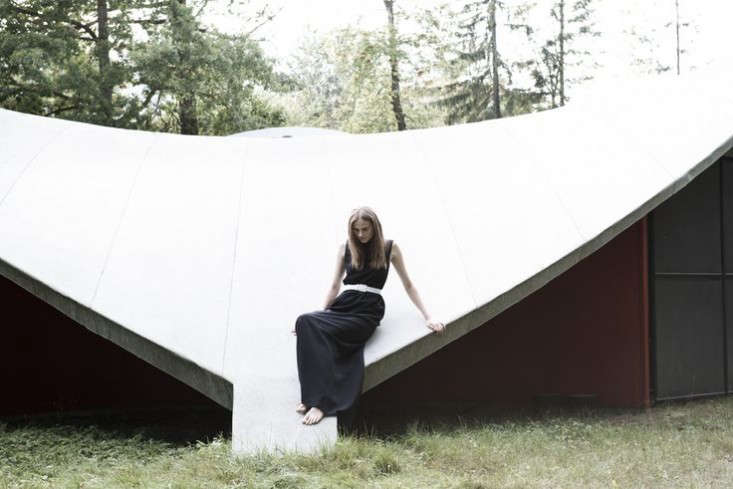 Above: The exterior of Kukkapuro’s 1968 studio, located in Kauniainen, just outside of Helsinki.

RM: Last thing you purchased for your home?
SK: I’ve been traveling now for the past year so I haven’t been decorating my home that much, but I just bought some weird old flower vases from a flea market to bring back with me.

RM: What’s the first thing on your wish list?
SK: A summerhouse by a lake. 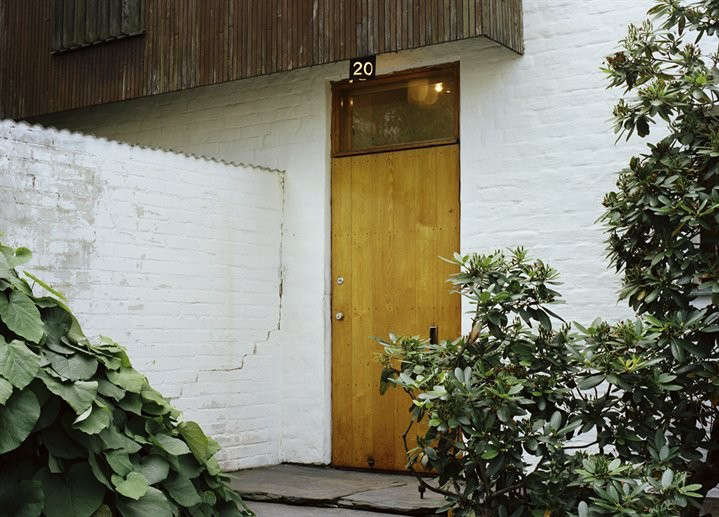 Above: The entrance to Alvar Aalto’s own home in Helsinki.  Photograph via Nowness.

RM: Favorite art piece or architectural work of the moment?
SK: I love the works of Heikki Marila, a Finnish artist. He just had a big exhibition in Helsinki and we had the privilege of staging Samuji’s fashion show at the gallery surrounded by Marila’s beautiful paintings. In architecture, my all-time favorite is Alvar Aalto.

For more on Finnish design, see our recent posts on the houses of blogger Suki Vento of Varpunen and stylist and shop owner Tiina Laakonen in the Hamptons.