Back in February, we partnered with one of our all-time favorite paint purveyors—Farrow & Ball in the UK—to reveal Nine New Colors just added to their 132-hue collection. Over the next few weeks, the Remodelista team will put all nine colors to work in our own homes. First up? Vibrant, full-of-life Vardo.

Remodelista sales manager Danny recently moved his family from a Victorian in San Francisco to a historic, Tudor-style house in Minneapolis. Since Danny works from home, he needed to set up a new office immediately. He chose a small room on the third floor of the house, shoehorned under the dormers. The space has a dramatic view of downtown Minneapolis, but its dingy white paint was a little sad. And since Danny was acclimating to Minneapolis winters, he did not want a moody, wintry hue. Among Farrow & Ball’s new colors, Danny was immediately struck by Vardo for its depth and liveliness. 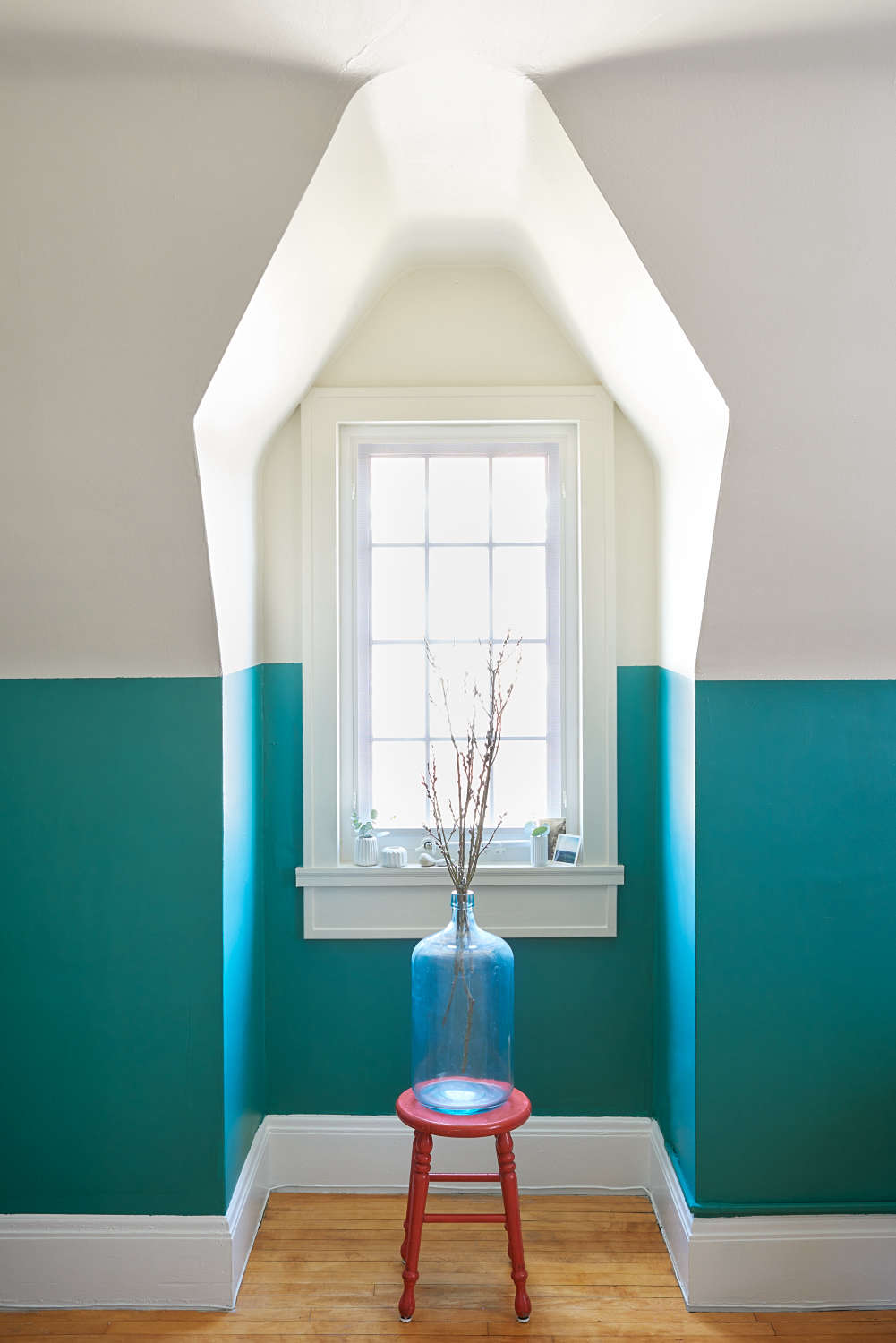 Above: Because Vardo is bold and Danny’s office is small, with inward-sloping dormer ceilings—he opted to paint Vardo on the room’s lower half and Shadow White on the trim, upper walls, and ceiling for balance. He says the rich white is “like a warm blanket, or melted vanilla ice cream.” 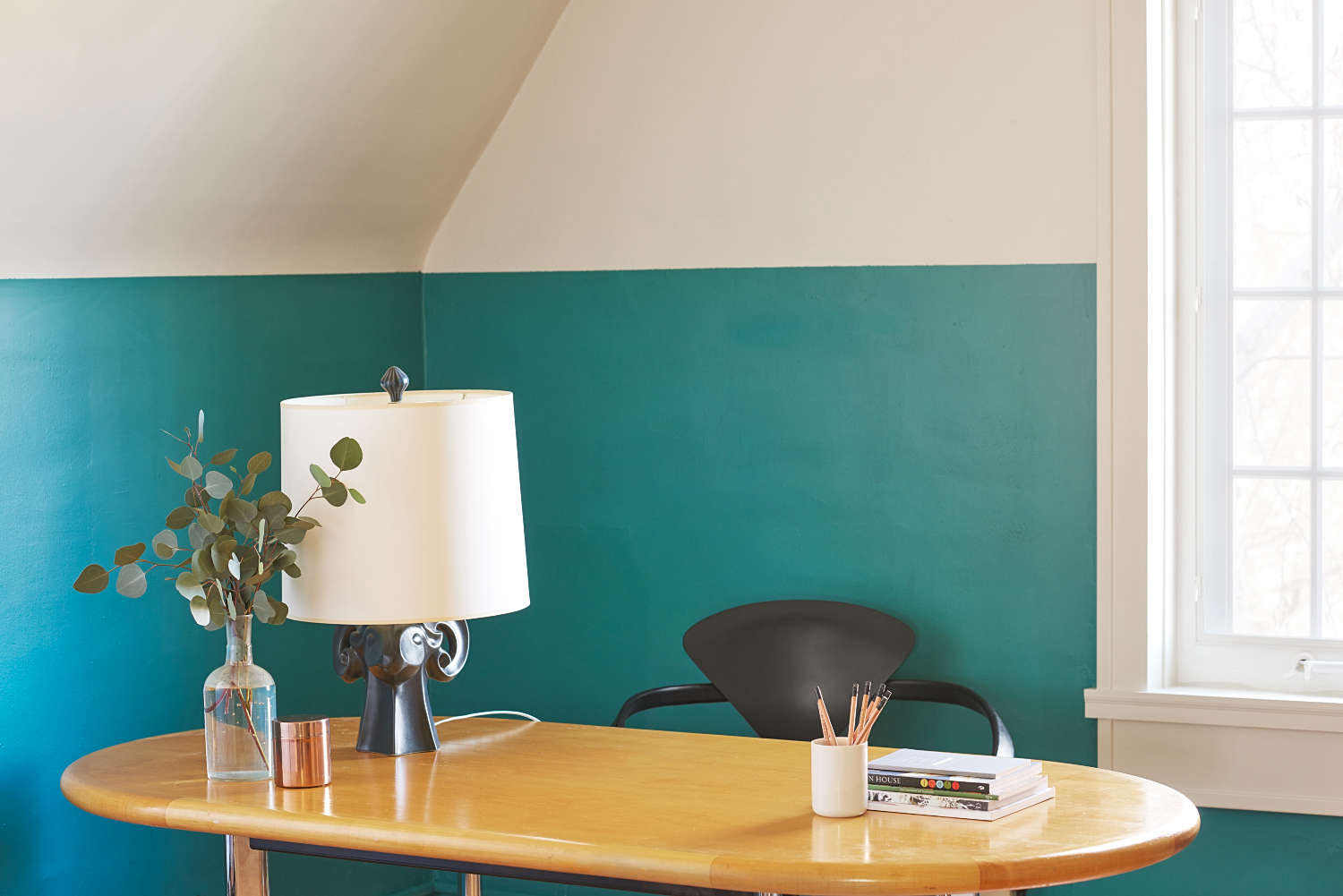 Above: Danny’s overarching goal was to add personality to the space. He anchored the work area with a long-loved Knoll desk and a Norman Cherner Armchair sourced from Rago Auctions in New Jersey. A Ram’s Head Lamp by Jonathan Adler is perched on the desk. 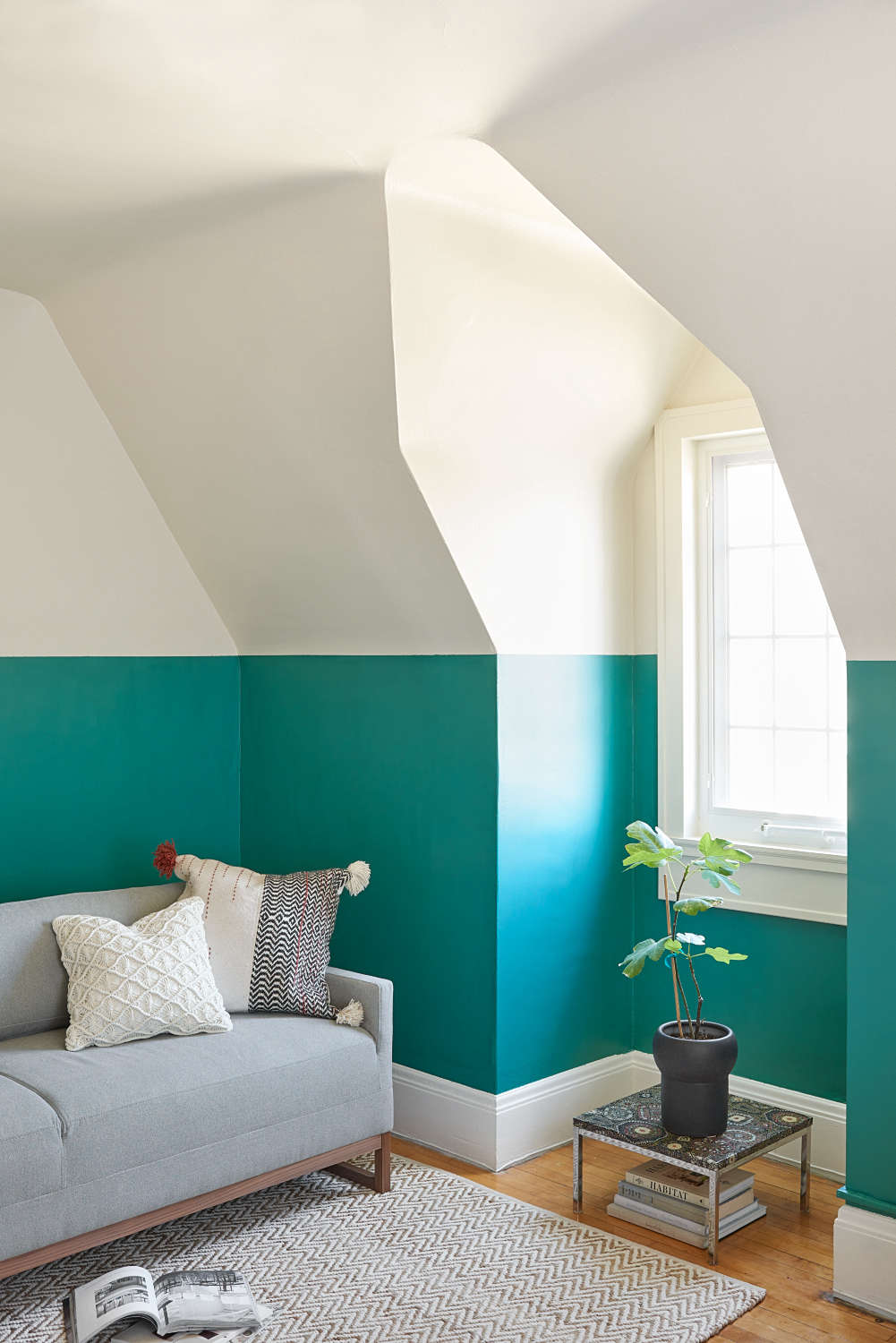 Above: Not one to sit in the same spot all day, Danny bought a Diplomat Sleeper Sofa from Minneapolis company Blu Dot. The room can now double as a guest room when required. 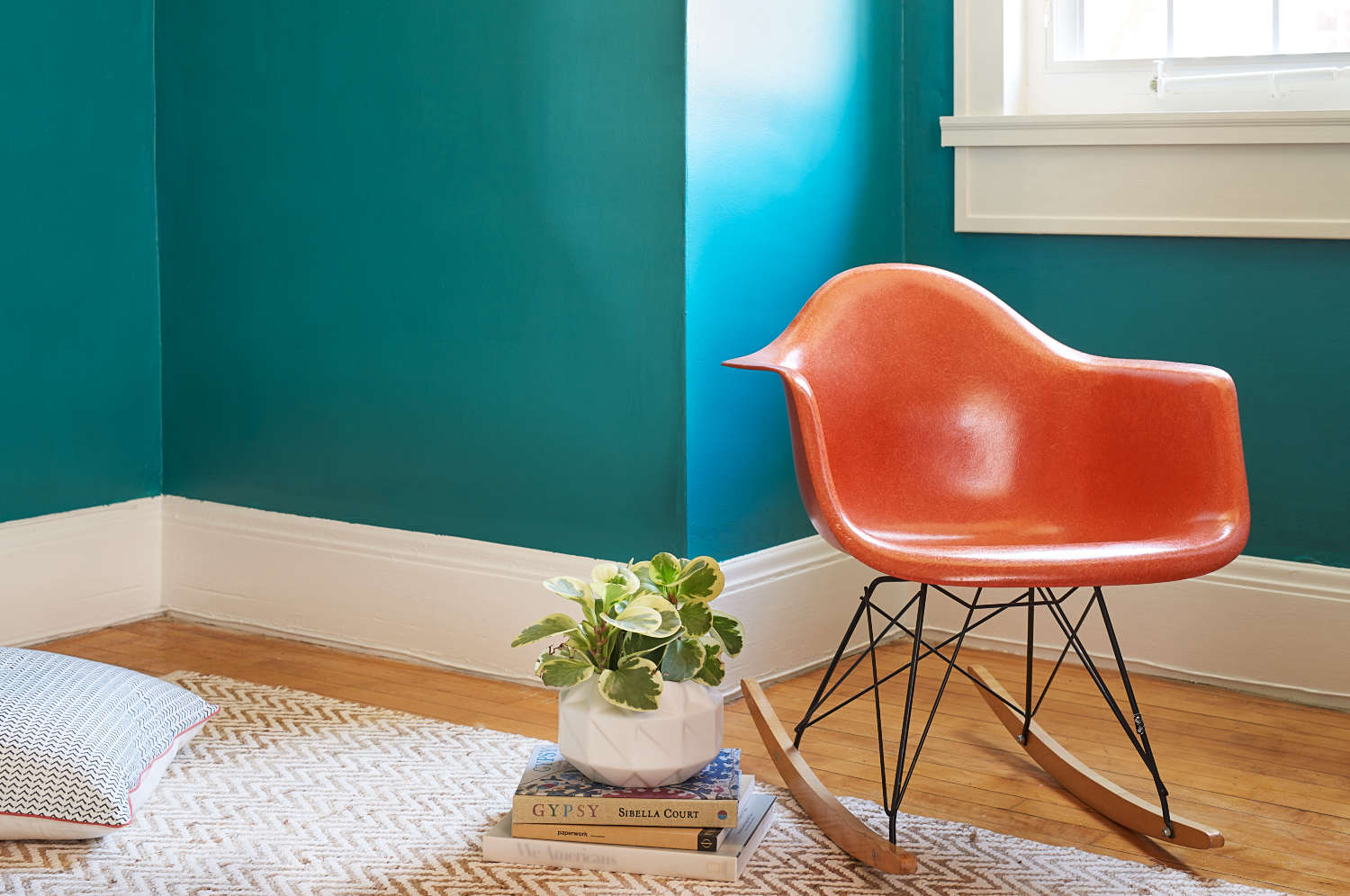 Above: Orange and red accents, including a vintage Eames Rocker, complement the blue-green Vardo. The chair sits on a Jute Chenille Herringbone Rug from West Elm. 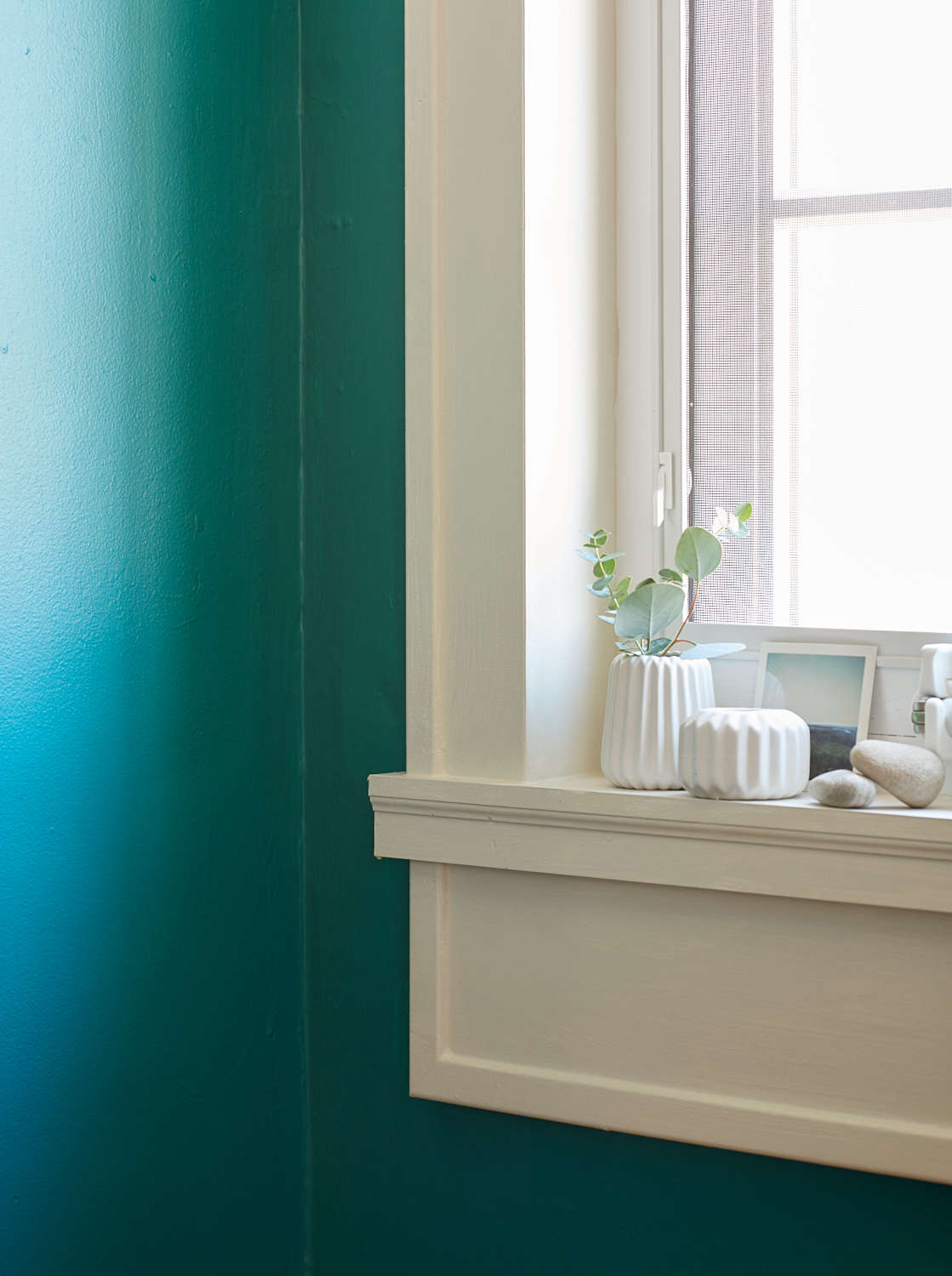 Above: Windows on the north and east sides of the room mean vivid morning light floods the room first thing in the morning. Later in the day, as the light shifts, the Vardo walls become “subdued in the afternoon, then deep and mysterious at night,” according to Danny. 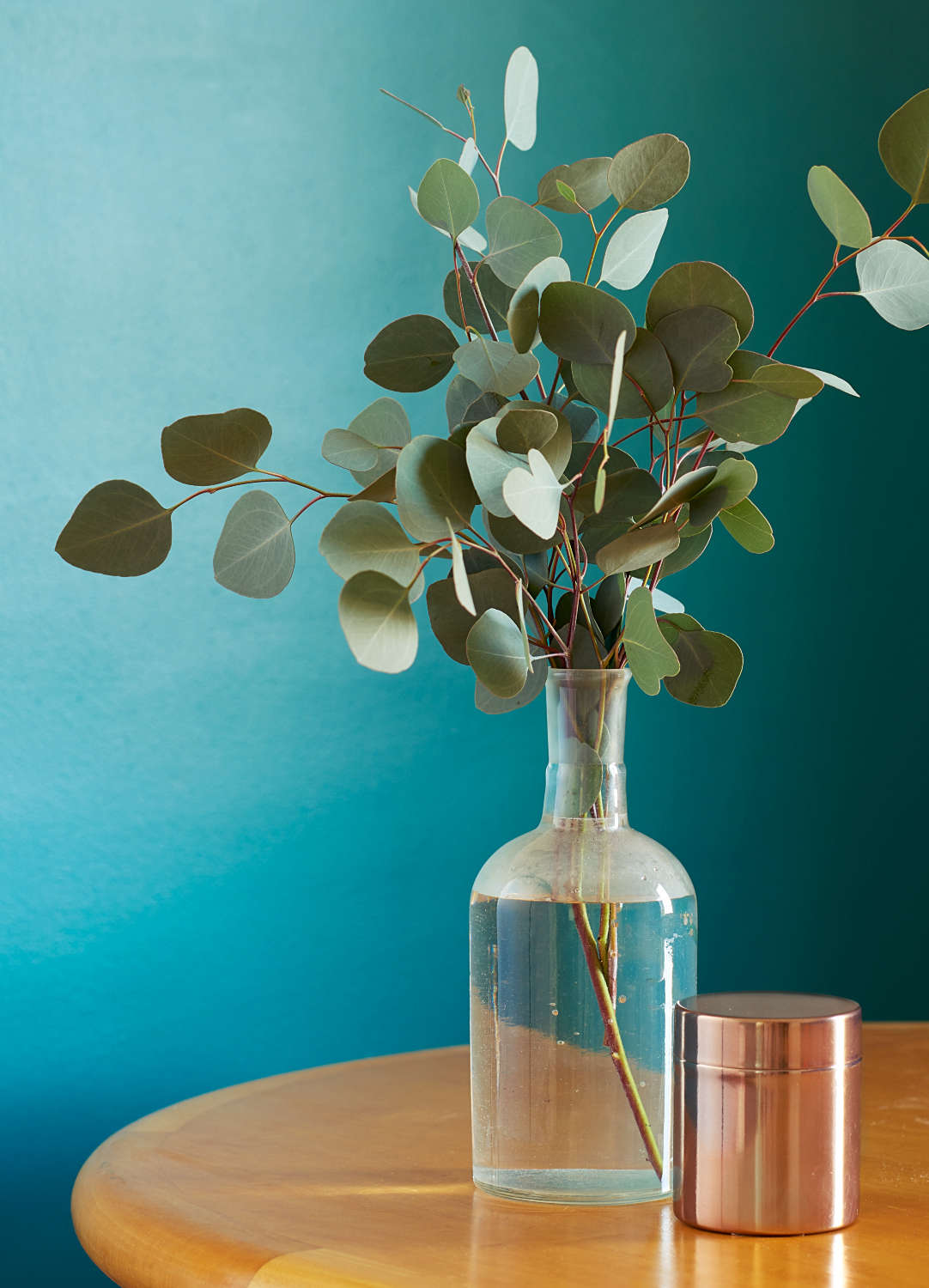 Above: Before he started painting, Danny wondered if he was taking a risk with bold Vardo—but he’s been delighted to discover that Vardo flatters a surprisingly broad range of colors and finishes, including copper, varnished wood, and eucalyptus green.

Follow along over the next several weeks as Remodelista editors overhaul their spaces using Farrow & Ball’s Nine New Colors.

Steal This Look: An Artful Apartment in Palma, Mallorca