Last week's post on Jasper Morrison's Crate generated a bit of controversy: Over at Yahoo's Shine, staffer Anne Ichikawa called it "redonkulous." Another reader said, "This looks and feels like an April Fool's joke." We did a bit of sleuthing and turned up a great piece in the International Herald Tribune," which asks the question: "Why has the Crate become the most controversial object in design?"

Here's the backstory: "When Established & Sons commissioned a piece from Jasper Morrison, he set out to design a bedside table. He concluded that he could not improve upon the old wooden wine crate in which he stored books beside his bed: 'The main reason I did it was because I liked the old crate and wanted a couple more,' Morrison says. The Crate is almost identical to the original, but it's made from higher quality wood—Douglas fir, rather than splintery pine—and the joints are stronger. The only distinguishing feature is a small stamp on its side."

At the very least, Morrison's Crate reminds us how much we like simple forms and humble materials. It also reminded us to visit Established & Sons, where we discovered some new Jasper Morrison pieces in the Crate Series, which we instantly fell in love with. (For an update on what E & S is up to at the Milan Furniture Fair, go to Dwell.) In NYC, Moss carries pieces from the Crate Series; although these new designs are not on the site yet.

Below: Low Chair made of a tubular steel frame with solid Douglas Fir slats linked with fabric strips.

Below: Wardrobe of solid Douglas Fir with fabric hinges. 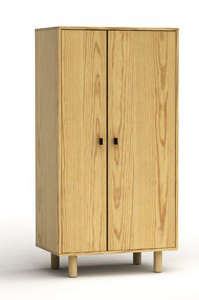 Below: Bookshelf of Douglas Fir. 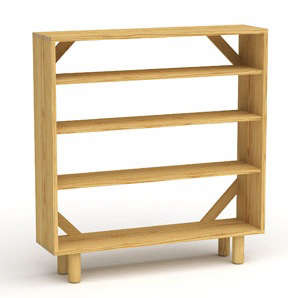 Sculptural Minimalism: A Winery Guesthouse by a French Architect in Portugal’s Douro Valley

Next Stop, Montecito: Once a Train Depot, Now a Minimalist Sanctuary