On my last visit to Paris, everyone told me that I needed to visit the new oyster and cocktail bar, Le Mary Celeste, in the Marais. After a day spent wandering the angular streets of the neighborhood, circling back on the same blocks by accident, I finally came across the curve of Rue Commines, and just at the point in the triangular street was Le Mary Celeste.  A pale blue exterior leading to an open bar–a calm setting for a tired-footed traveler.

The owners, New Yorker’s Josh Fontaine, Adam Tsou, and Colombian-born Carina Soto Velasquez Tsou previously worked with David Rager and Cheri Messerli of Weekends on the nearby Taqueria Candelaria (it’s a small world). After the success of Candelaria, the trio and the duo teamed up once again to design the interior of Le Mary Celeste, which is located in a former video editing office. The restaurant has a nautical vibe: rope coiled around columns, white-washed brick and seafoam green paint, and a tropical mural of a toucan. Top it off with slow Elvis ballads rotating in a vintage LP player in the back of the room–you’d swear that you were in a coastal village somewhere, and not deep in the streets of Paris.

Photography by Alexa Hotz for Remodelista. 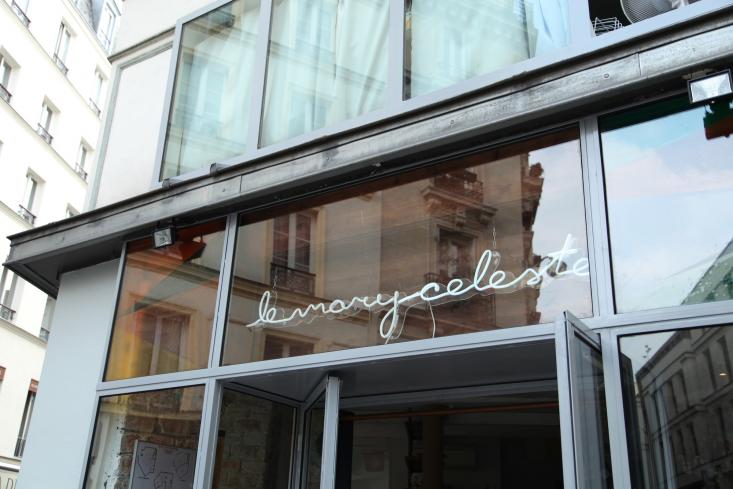 Above: Fontaine described the origin of new restaurant’s namesake to Vogue: “It was a boat in the 19th century that left New York carrying a cargo of pure alcohol and then was found adrift, all provisions on board, except for the crew.” 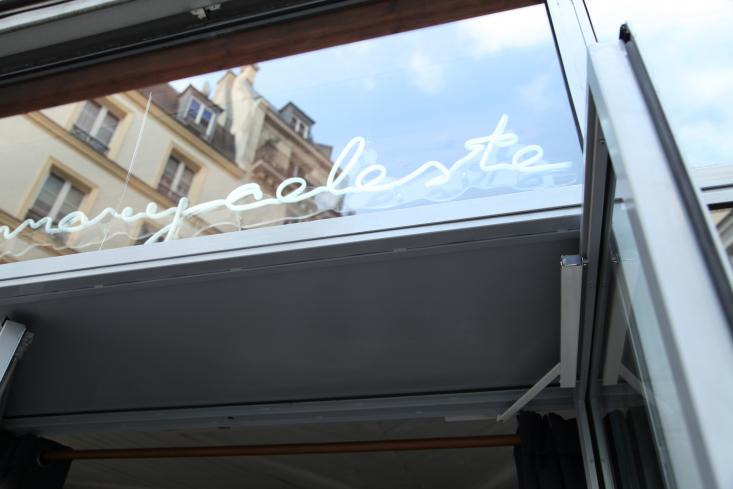 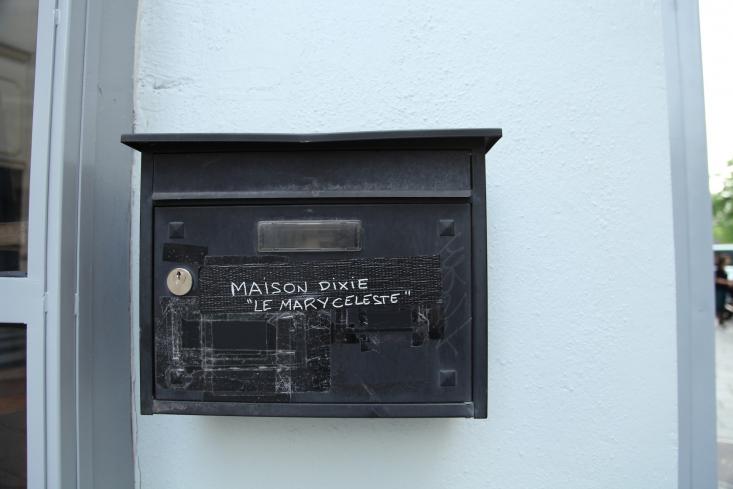 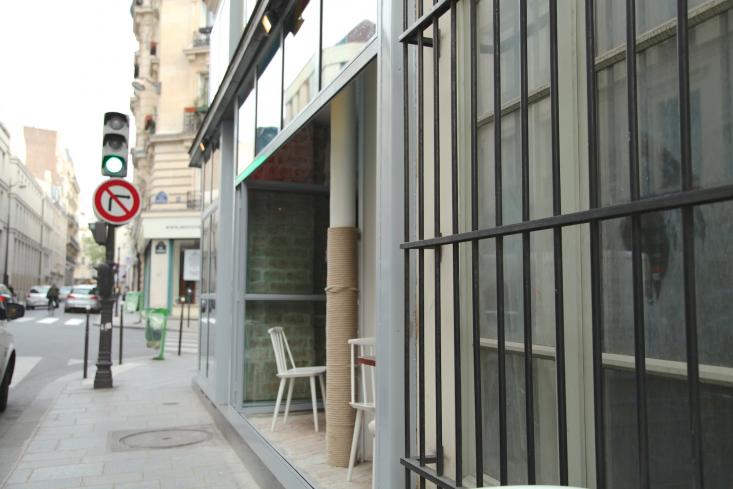 Above: Large windows are on either side of the restaurant make for an open-air feel. 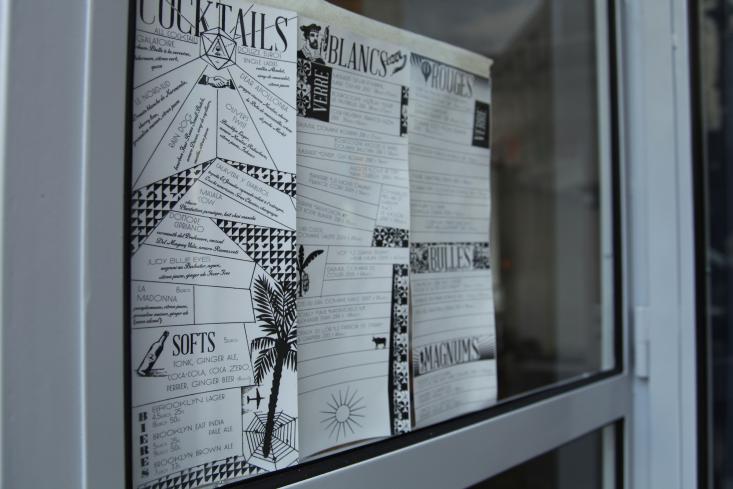 Above: The menu are designed by Rager and have collages on the back by Rosemarie Auberson. 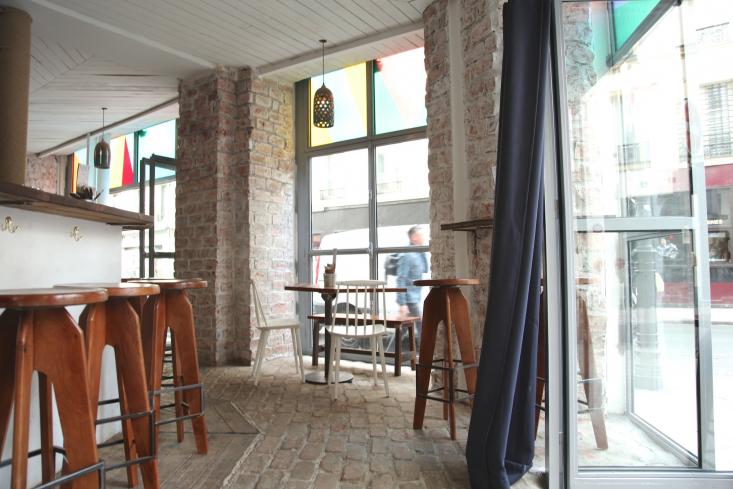 Above: The interior, formerly a video editing office, was stripped down by Rager and Messerli, who built it back up again from scratch. 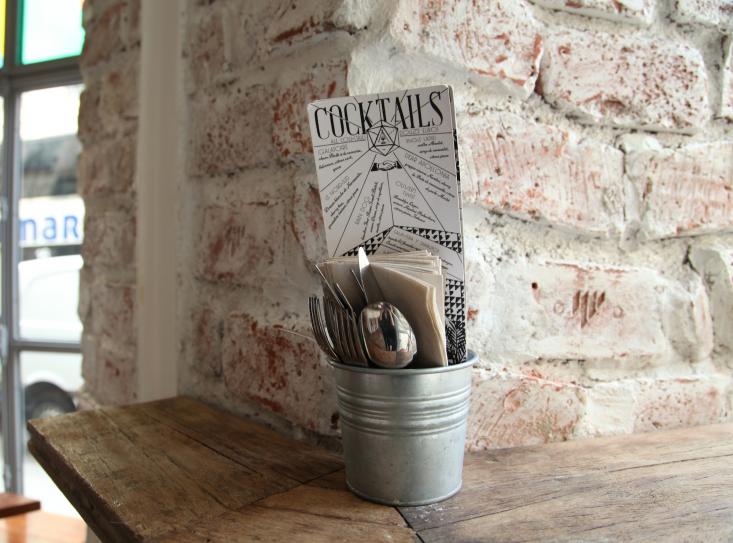 Above: The brick was reclaimed from building sites around the area and whitewashed. 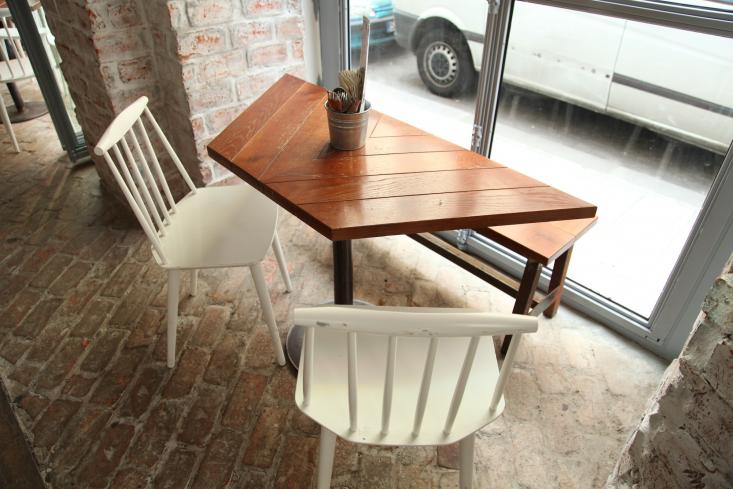 Above: A custom-built modular hex table. 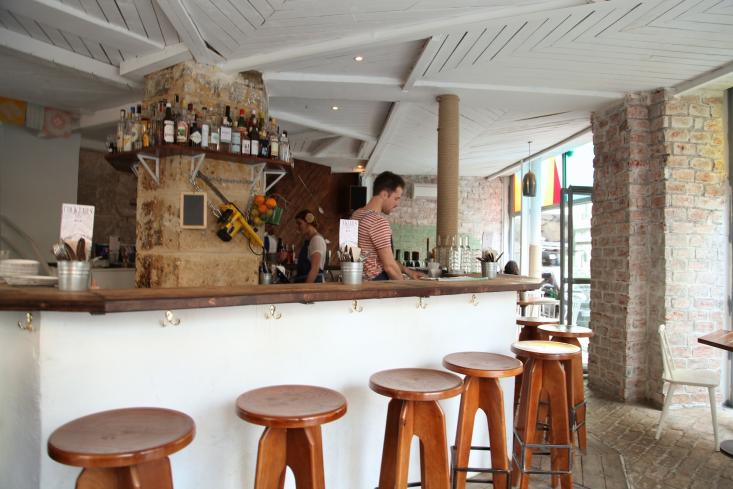 Above: The barstools and slatted backlit banquettes were also made for the bar. The stained0glass window designs are the work of Messerli. 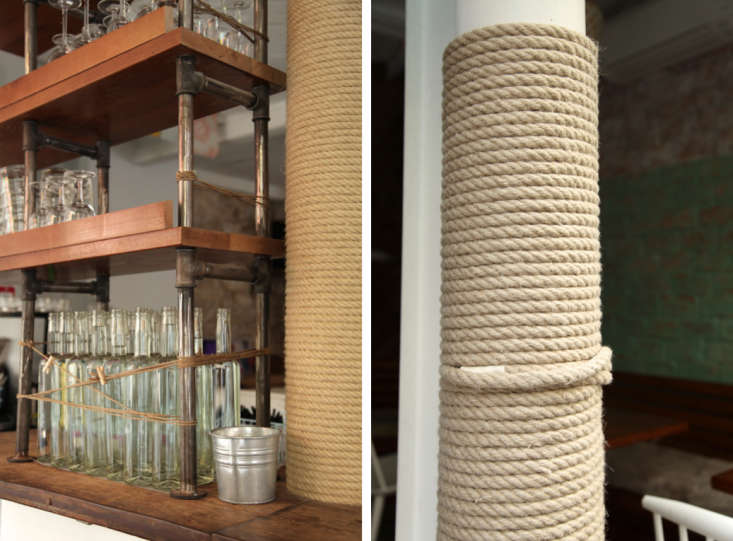 Above L: Glassware is wrangled with rope tied with proper nautical knots. Above R: Rope is tightly wrapped around the restaurant’s columns. 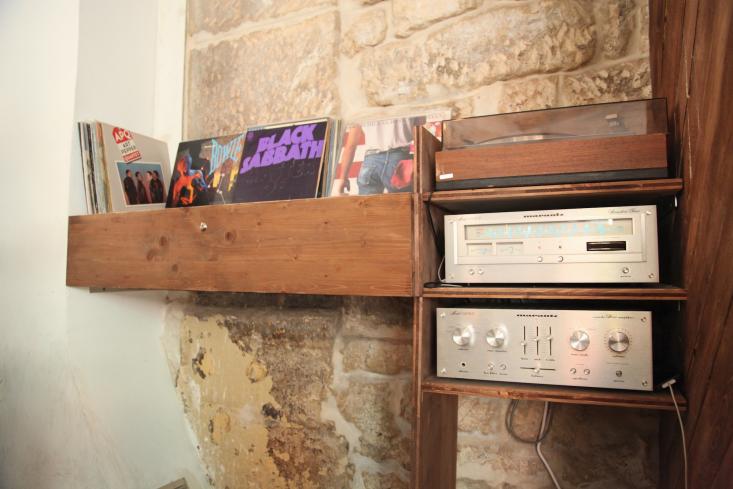 Above: A vintage stereo setup is matched with vintage LPs. 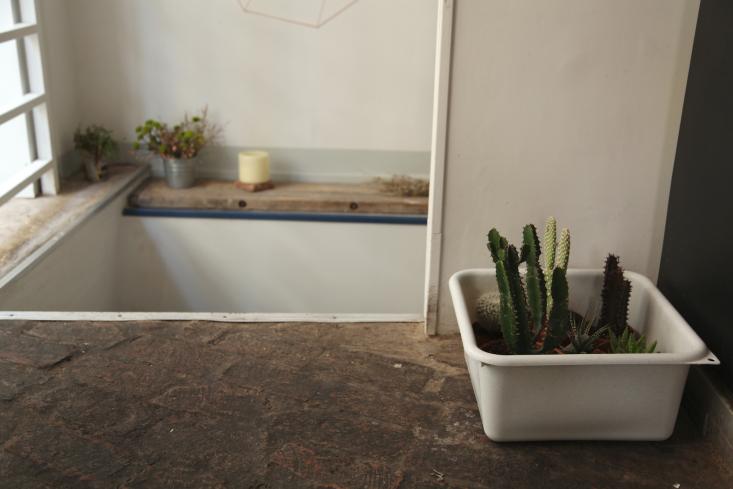 Above: A bucket of just-watered succulents behind the bar. 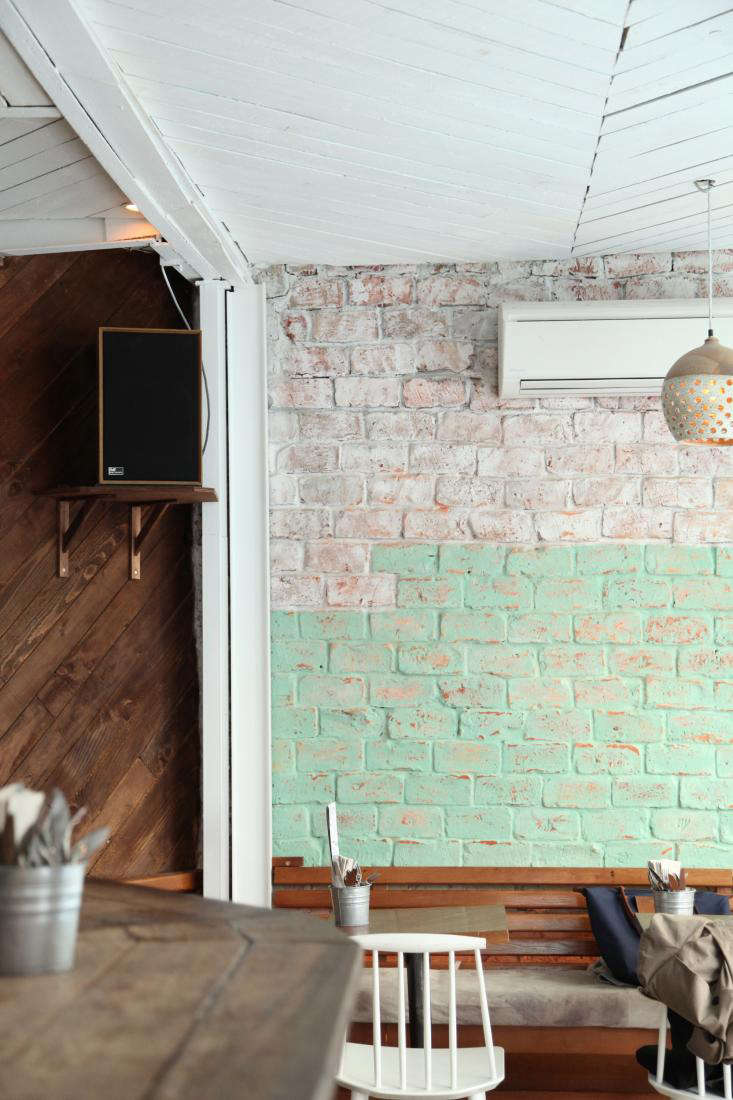 Above: Whitewashed bricks are color-blocked with seafoam green paint. The lighting is by LA artist Heather Levine. 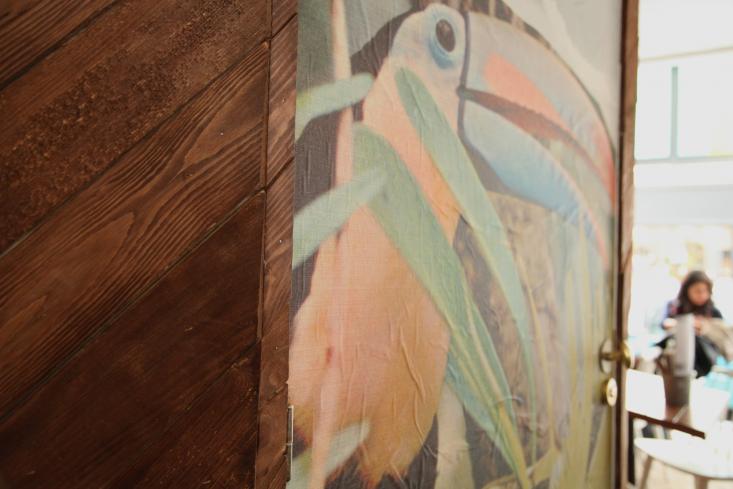 Above: The toucan mural. 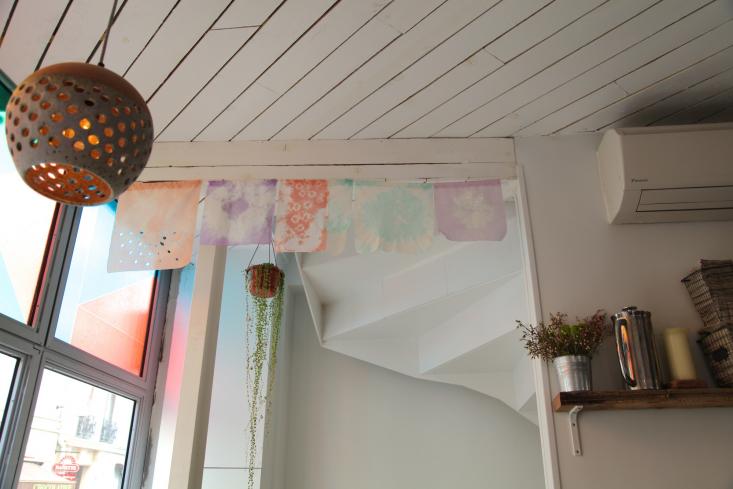 Above: Watercolor flags hang above the back stairs. 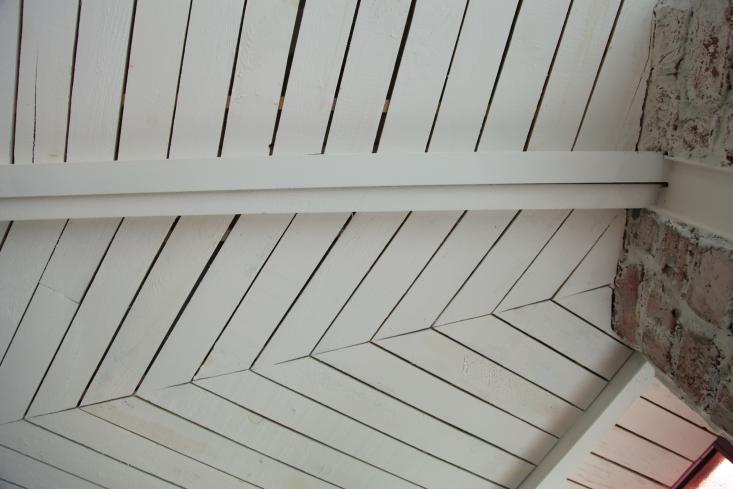 Above: White chevron parquet on the ceiling. 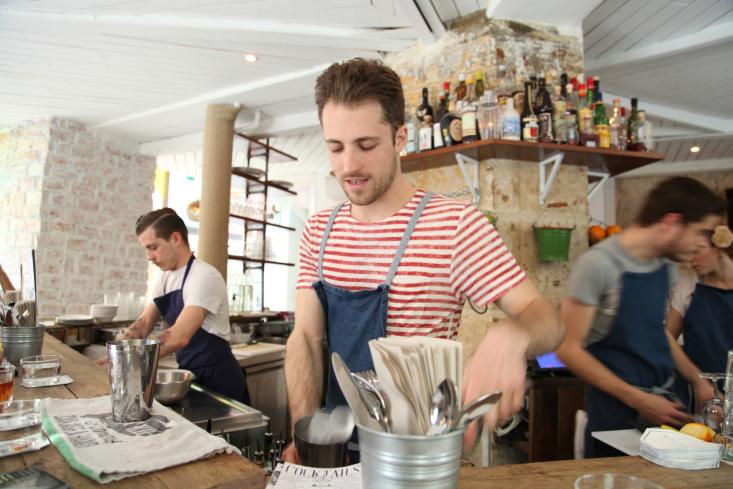 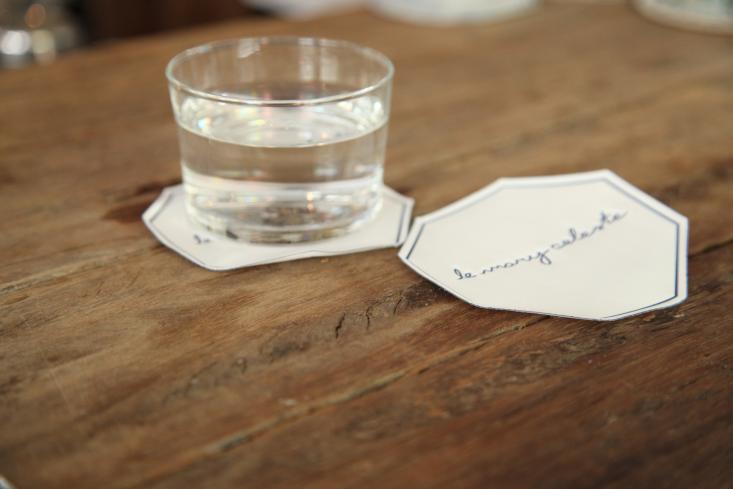 Above: The bar top and surrounding deck flooring were made from wood palettes previously used for shaping cement forms. 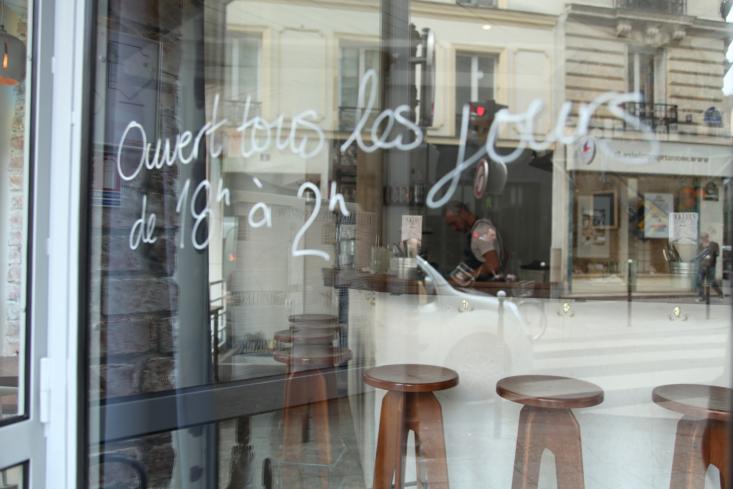 For more places to visit in and around Paris, see our Travels with an Editor: Paris series, and visit our Paris City Guide. Another Paris seafood hotspot? Take a look at Clamato in the 11e.

Below: Location of Le Mary Celeste in the Marais.

N.B.: This post is an update; the original story ran on June 6, 2013 as part of our Travels with an Editor: Paris issue.