Architect Johanna Molineus, the daughter of a well-traveled international banker and a mother who worked in the State Department, grew up mostly in Washington, D.C., but moved frequently with her family and describes herself as “German, American, and French.” She studied architecture at the í‰cole d’Architecture Beaux-Arts in Paris and the Technical University in Vienna, Austria, and later worked in the offices of Pentagram in London and Arata Isozaki & Associates in Tokyo before establishing her own practice in London.

For the past few years, she has lived in a 678-square-foot, one-bedroom flat of her own making, painted a uniform shade of pure white and outfitted with classic furniture and lighting from midcentury greats such as Marcel Breuer and Arne Jacobsen. Located on the top floor of a Georgian house in Notting Hill, the apartment is animated by her ever-evolving collection of Chinese and Central Asian textiles, which she switches out twice a year for variety, and masses of silver goblets, cups, candlesticks, which she collects during her travels. 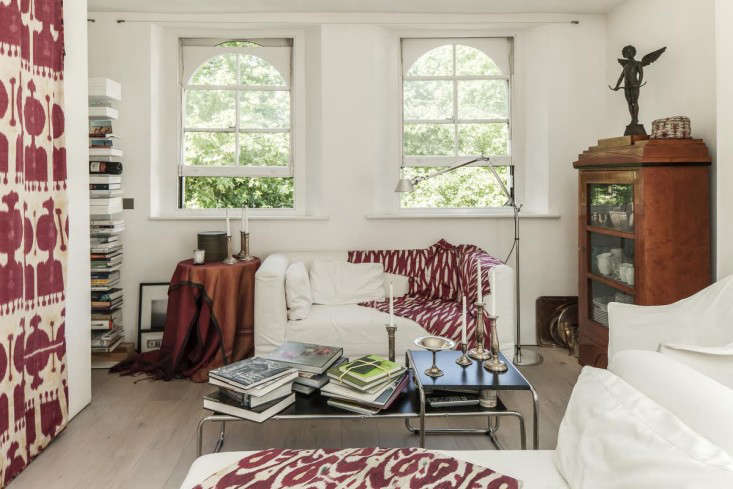 Above: The living area has a mix of classic modern pieces (a Marcel Breuer–designed Laccio Coffee Table from Knoll paired with the smaller nesting Laccio Table) and a Tolomeo Floor Lamp from Artemide, layered with vintage textiles Johanna has collected over the years. (“As a child, I lived in Uzbekistan and we traveled extensively in Turkey,” she says.) The two-seat sofa is the Small Nothing Sofa by Philippe Starck for Driade. 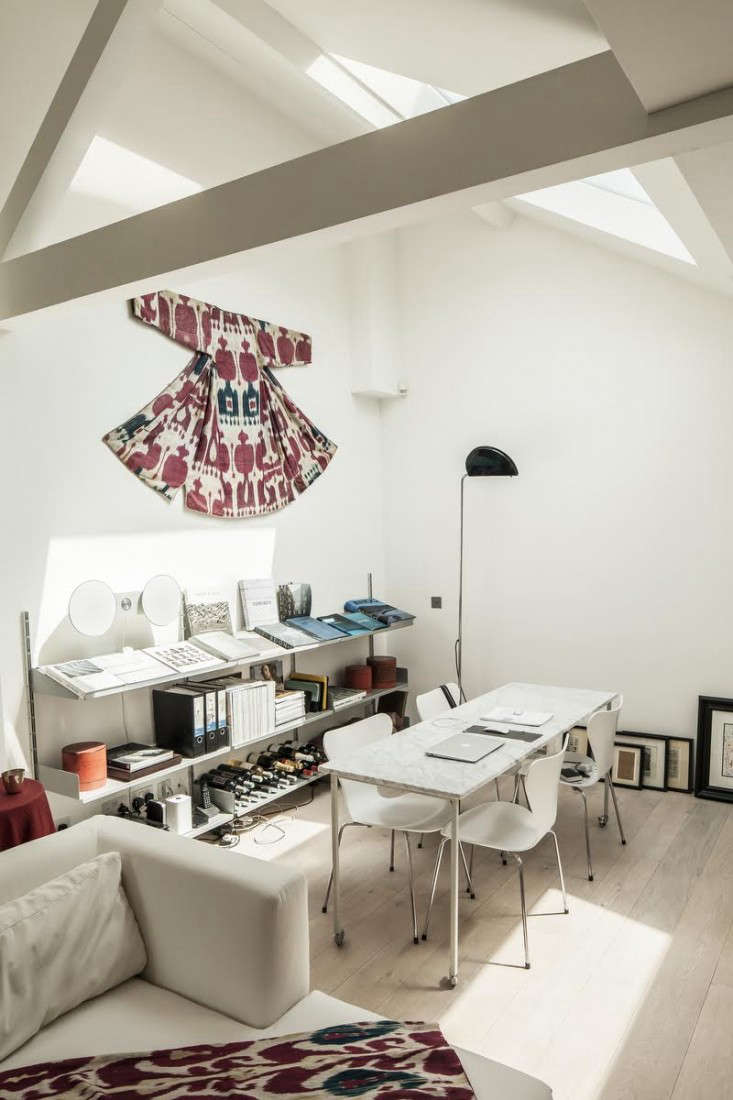 Above: Johanna designed the slim marble-topped dining table on wheels and had it fabricated; a set of Series 7 chairs from Fritz Hansen surrounds the table (more are stacked in a corner for overflow dinner guests). 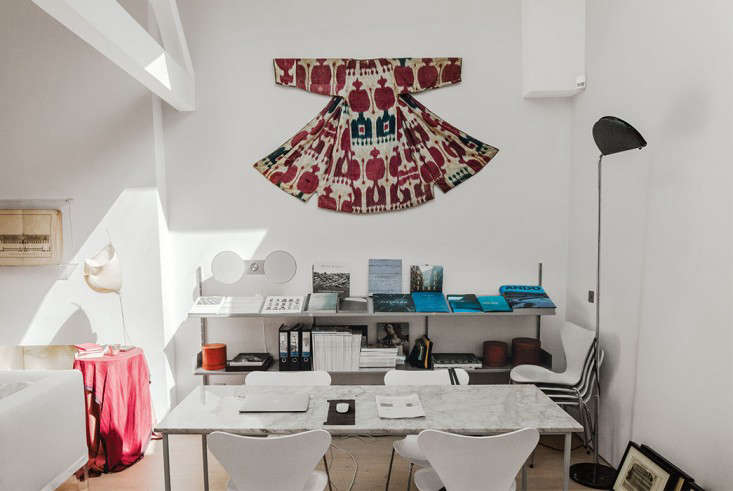 Above: An antique ikat ceremonial wedding coat from Central Asia dances on the wall above the Vitsoe shelving system, designed by Dieter Rams. (Remodelista UK editor Christine is a fan of the shelving as well: See The World’s Greenest and Most Economical Shelving System?) 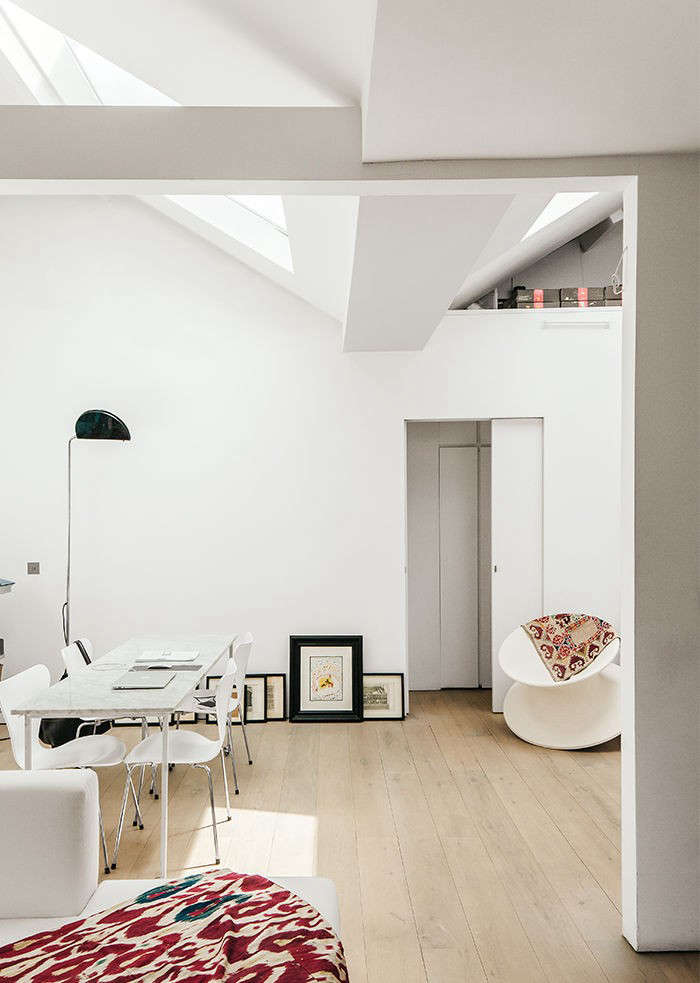 Above: “As an architect, I’m attracted to the purest white you can find, which is Farrow & Ball’s All White (according to FB, “All White contains no other pigment except white, and creates the softest, most sympathetic white with none of the uncomfortable cold blue feeling of a brilliant white”). The oak floors are finished with natural white oil from Danecare for a chalky, pleasingly pale look. 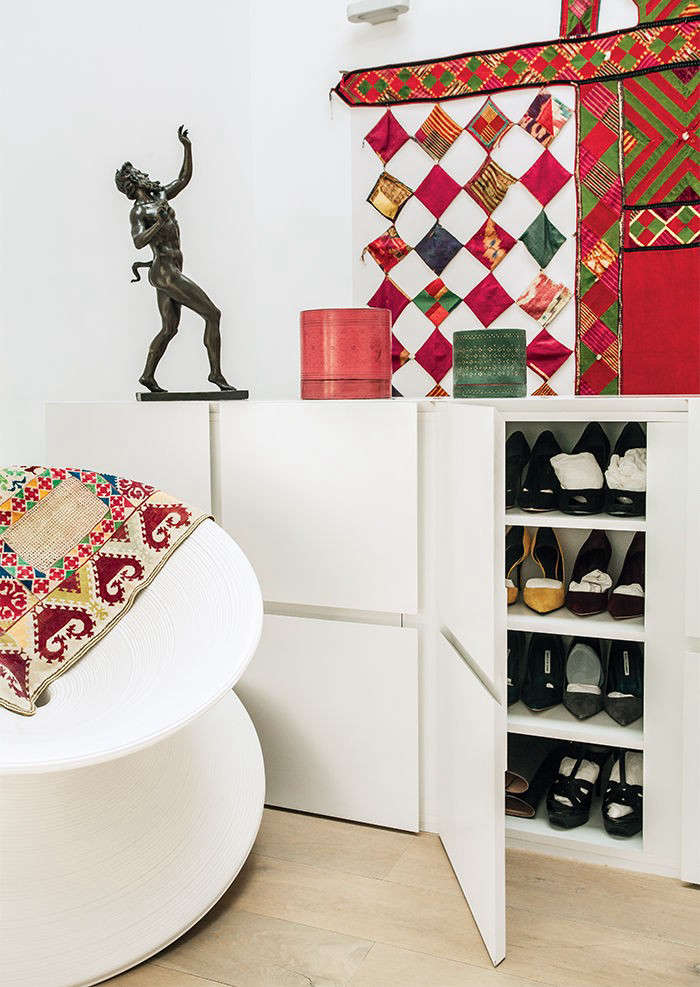 Above: Johanna designed the custom cabinetry in the living/dining area specifically for shoe storage. A Spun Chair by Thomas Heatherwick for Magis is draped with a vintage textile. 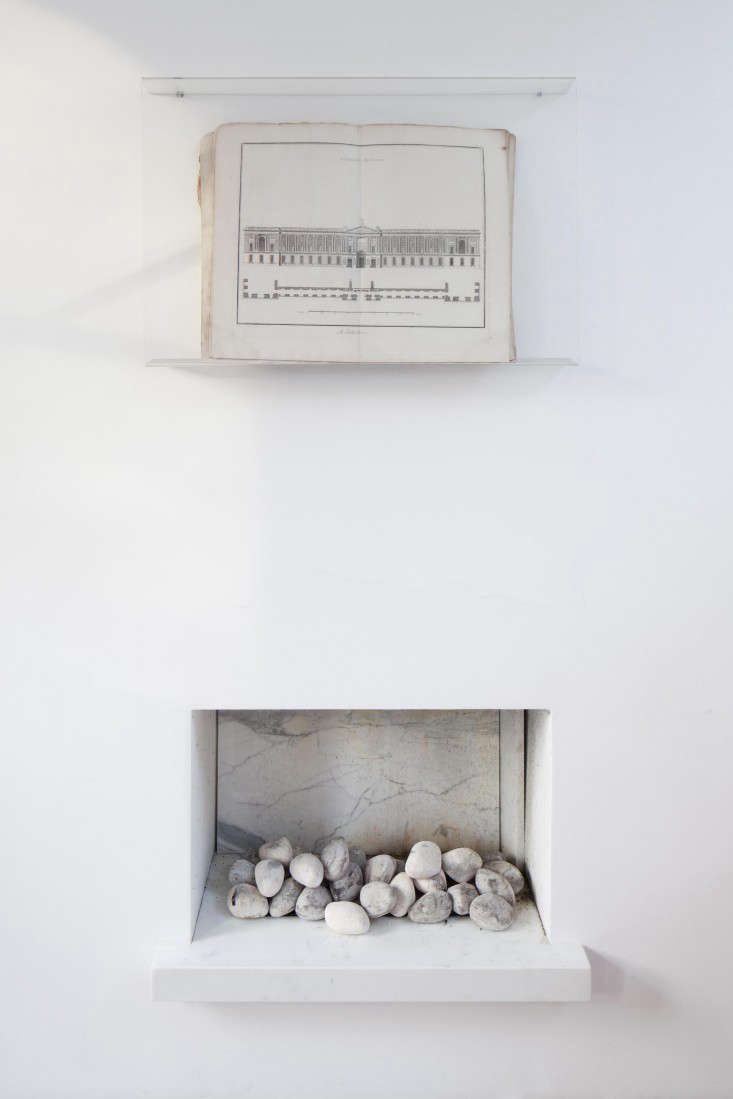 Above: A small gas fireplace, lined with marble, is inset in one wall. On display above the fireplace is a vintage book in a Plexiglas shadow box. “I found the book of architectural prints at a flea market in Moscow in 1991,” Johanna says. “It’s open to the Beaux Arts in Paris, where I studied.” Photograph by James French. 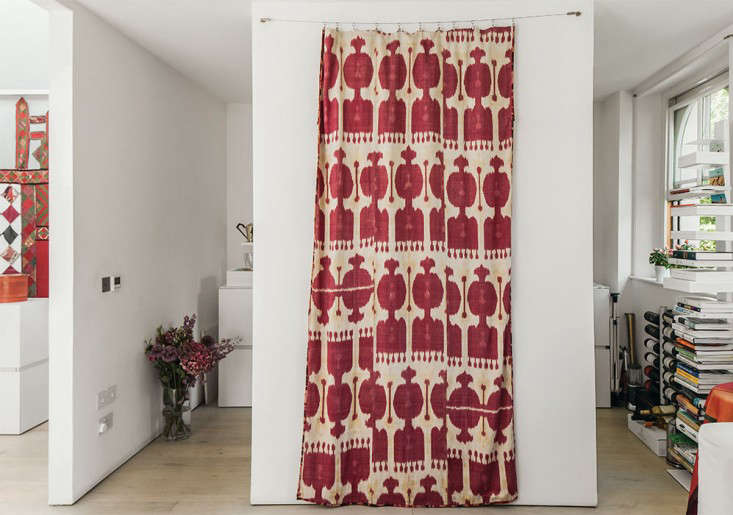 Above: An antique silk ikat Johanna found in Uzbekistan is displayed on a simple wall-mounted tension wire from Habitat (for something similar, consider the Dignitet Curtain Wire from Ikea). 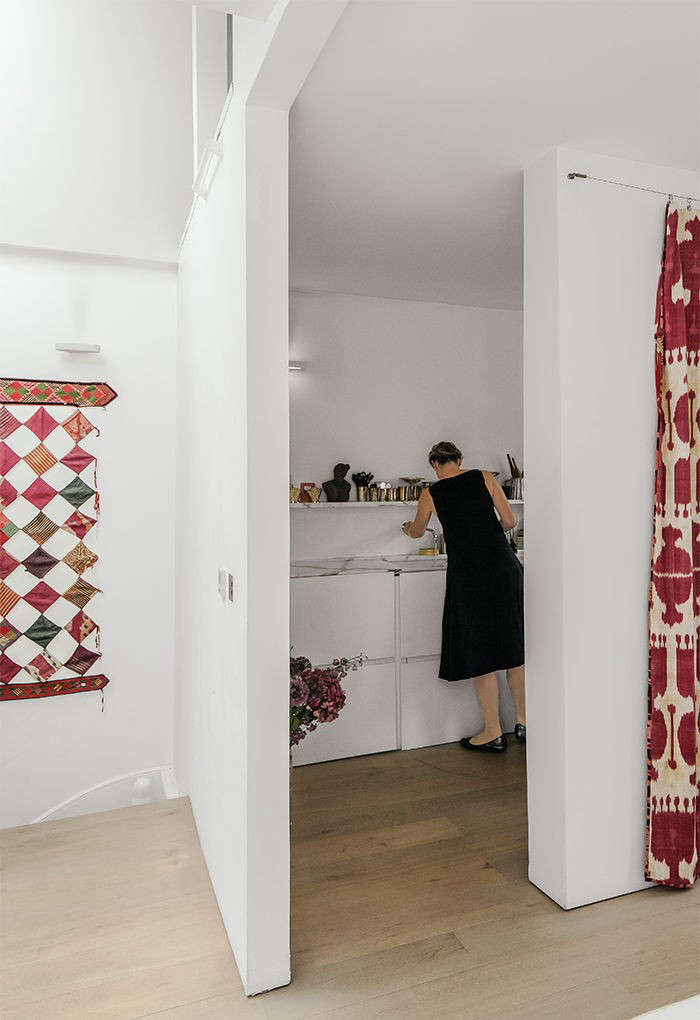 Above: A glimpse into the kitchen. “I love to cook and entertain; my current favorite cookbooks are from Ottolenghi. I don’t know anyone who doesn’t cook from Ottolenghi, to be honest.” Her favorite neighborhood restaurant is Granger. (It’s a favorite of ours as well; see Aussie-Style Dining in London.) 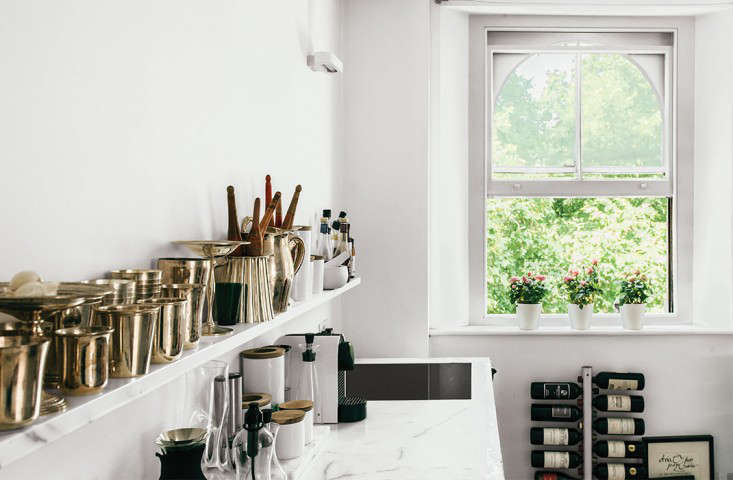 Above: “I got the silver-collecting bug from my mother,” Johanna says. “When I travel, I go to flea markets and antiques stores and pick up silver from everywhere, from South America to Europe. I have pieces from eBay, too.” 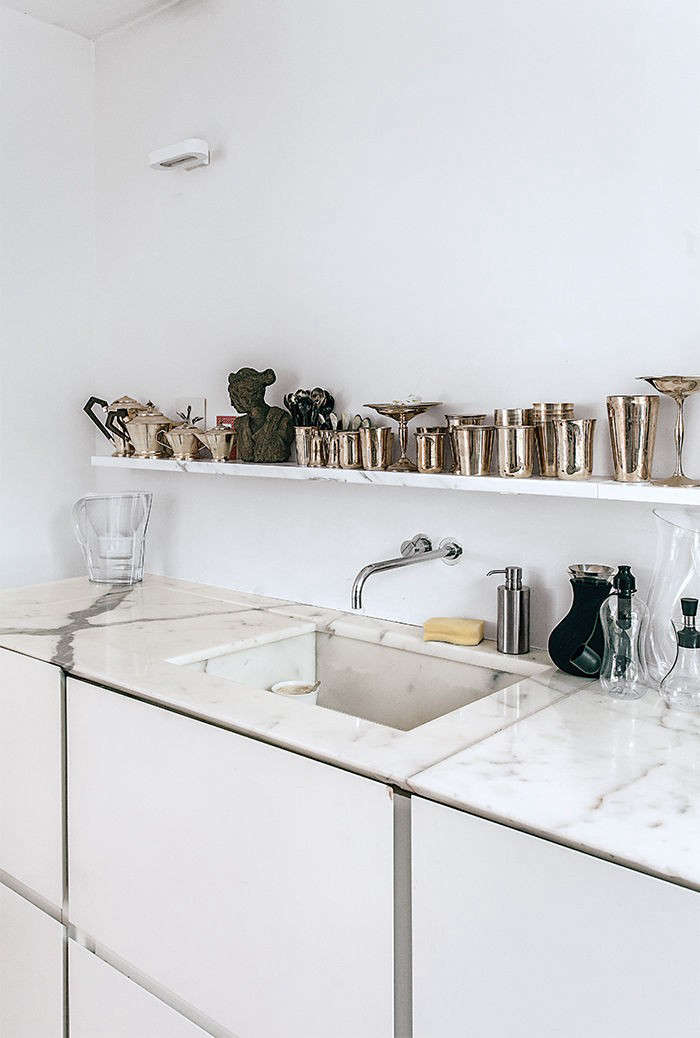 Above: The countertops, sink, and shelf are custom-made of Statuario marble and the faucet is Vola. For more faucet ideas, go to 10 Easy Pieces: Architects’ Go-To Modern Faucets. The Talo 21 Mini Wall Sconces are by Neil Poulton for Artemide. 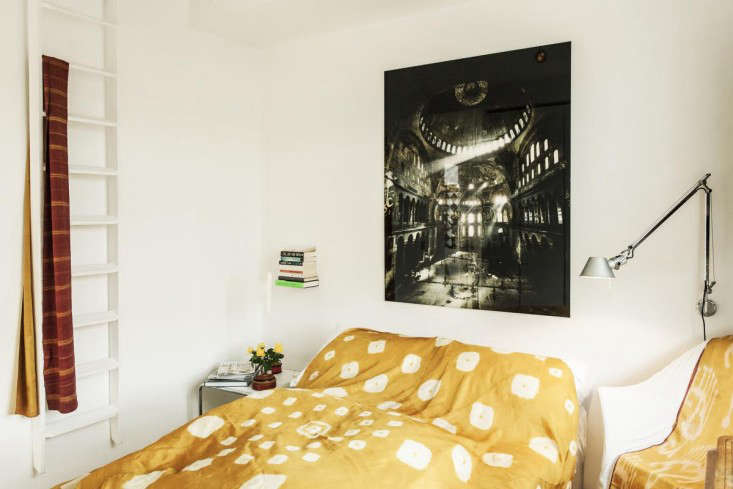 Above: An antique textile serves as a bedcover; the bedside table is the Laccio Side Table by Marcel Breuer for Knoll. 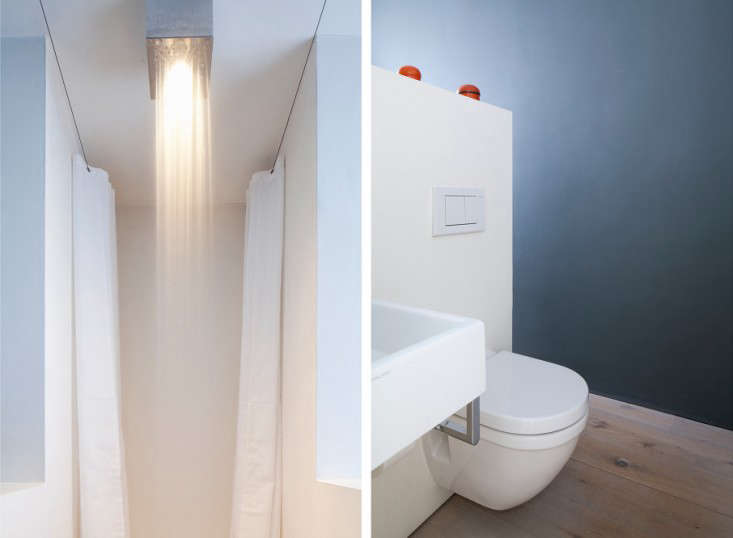 Above: The small bathroom includes a rain shower and fixtures from Duravit, including the Starck Wall-Mount Toilet. Photograph by James French.

$711.45 USD from Design Within Reach
Artemide