LA jeweler Kathleen Whitaker recently invited us into her turn-of-the-century, wood-framed house in Echo Park; as longtime fans of her quiet eponymous jewelry line, we were curious to see how her understated aesthetic might play out in the home that she and her cinematographer husband, Bradford Whitaker, have remodeled by themselves over the last three years.

Instead of imposing a minimalist aesthetic on the 1909  house, the couple let the structure speak for itself by coaxing out its latent character, dormant since the 1960s when it was converted into three apartments. Strategic doorways were relocated to their original positions (restoring the original flow of the house in the process), original beadboard paneling was retained, and the Douglas fir floors were refurbished with a century’s worth of wear and tear intact. And as the couple literally rebuilt their place by hand, they simultaneously renewed its Southern California spirit by filling it with expressive colors, lush and verdant houseplants, and the artwork and designs of their artist friends. “We chose saturated colors for the rooms because in an old house, color is more forgiving than white,” says Kathleen.  “I suppose my jewelry designs are the antithesis of the expression displayed here at home.” 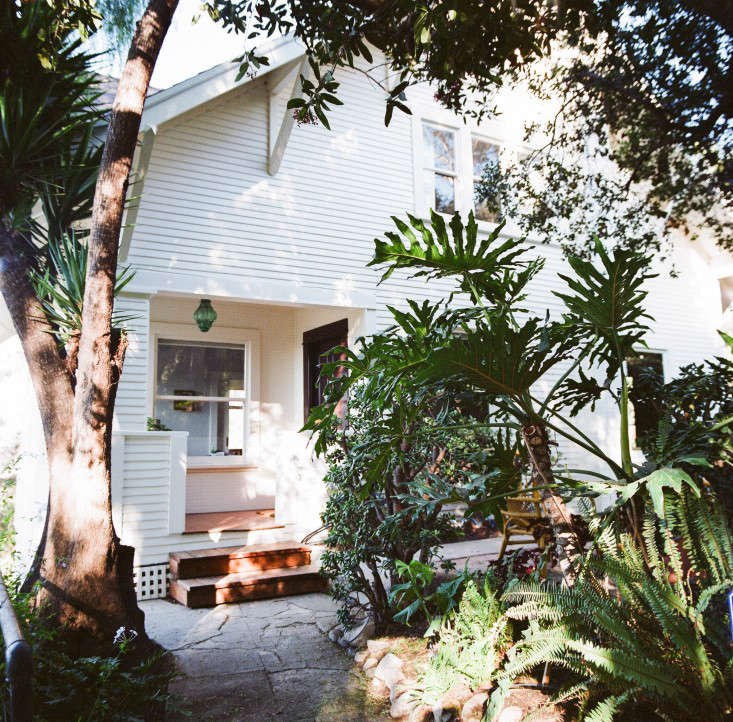 Above: On the front porch, the couple moved the front door back to its original location, so that visitors enter into the foyer instead of straight into the living room. Bradford then moved a window from another part of the house to replace the door. Working with color consultant Teresa Grow, they opted to paint the shingled exterior of the house in Milk Mustache from California paint company Dunn-Edwards, and the doors Farrow & Ball’s Mahogany. “My husband is fond of saying, ‘We needed to pay someone to tell us to paint the house white?’ But, yes, we did,” Kathleen says, ” White can go very wrong.” 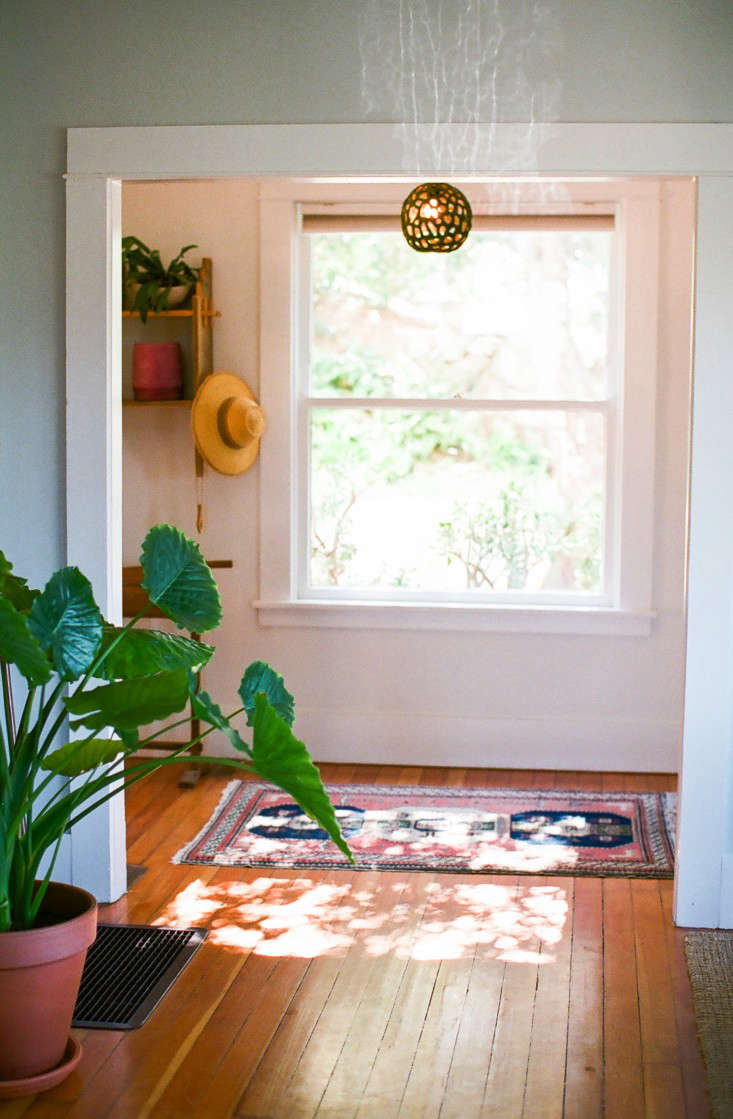 Above: A former potter, Kathleen selected a pendant light by mid-century Californian ceramicist Stan Bitters for the entry; it came from Silverlake dealer Ten10. The relocated front door (just out of the picture frame on the right) restores the foyer as a place of welcome.

Above: The freshly painted living room, with Martha Stewart Living’s Heavy Goose on the walls with Popcorn on the trim, provides a calm backdrop for the cool tones of the upholstery. Kathleen updated used and found furniture–the sofa is a Room & Board design purchased on Craigslist–with sapphire teal blue French cotton poplin and purple linen from Diamond Foam and Fabric. The African Aso Oke fabric pillows came from a textile dealer in the Rose Bowl Flea Market. The ceramic candle holder on the coffee table is by artist David Korty. 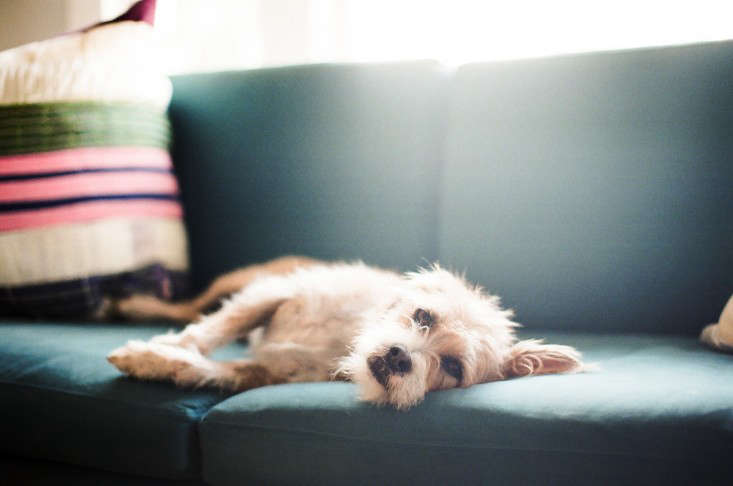 Above: June, the couple’s rescued Terrier mix, soaks up the sun on the sofa.

Above: After Bradford gutted and dry walled the living room, he installed a walnut mantel over the fireplace. “I discovered that my husband could very easily make a living as a high end contractor,” Kathleen says. “He spent his teen summers fixing up houses in Kentucky and knows how to do everything.” Art on the new walls includes a vintage Belgian tapestry hung wrong side-out (for a preferred color palette), an oil painting over the mantel by Margaret Anne Smith (who works almost exclusively in Cobalt yellow), and a watercolor by Mike Mills aptly titled Bruises. A large Elephant Ear potted plant introduces an organic sculpture to the arrangement. 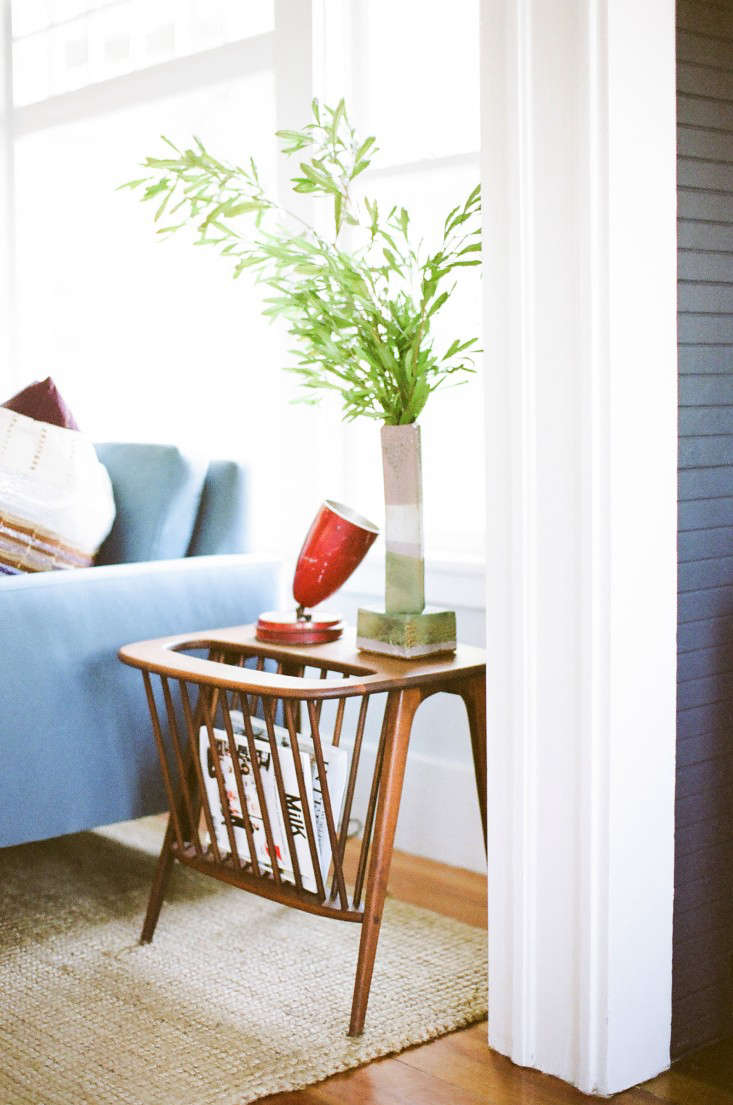 Above: A vintage French table light from Nicky Kehoe and a ceramic vase by Bari Ziperstein sit on a mid-century magazine rack from Boo Radley’s (now called The Window). 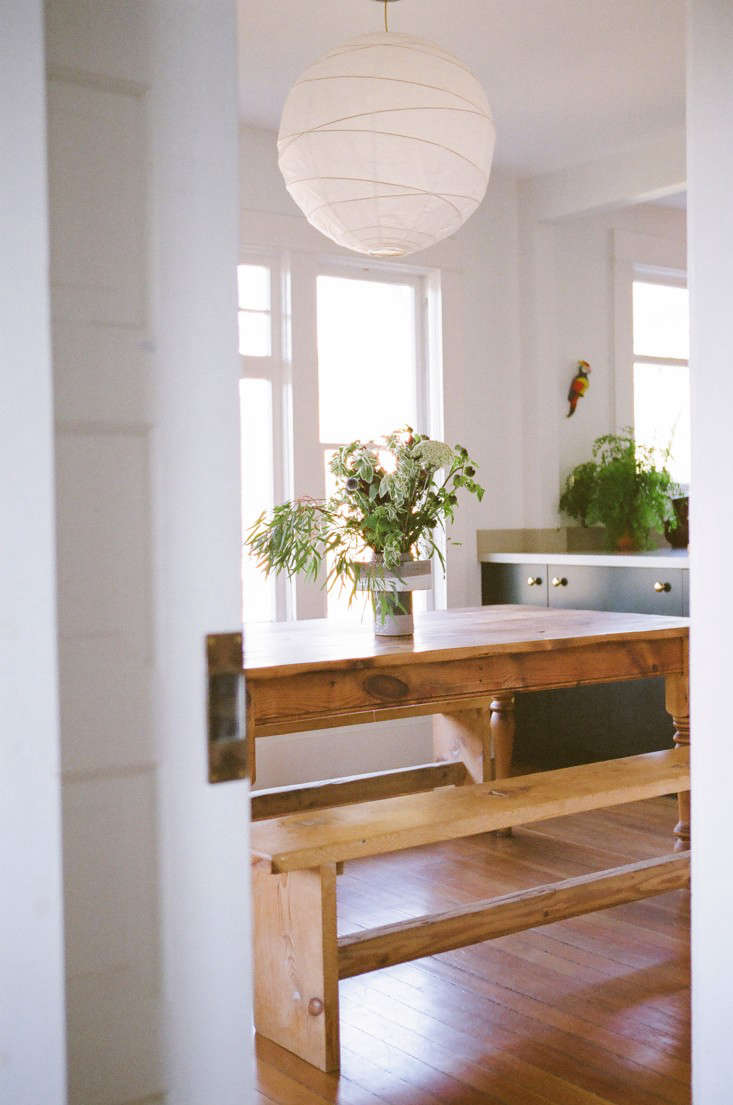 Above: In the kitchen, a Noguchi Akari pendant shade and a ceramic vase by Bari Ziperstein on an old pine table that the couple acquired from a friend. 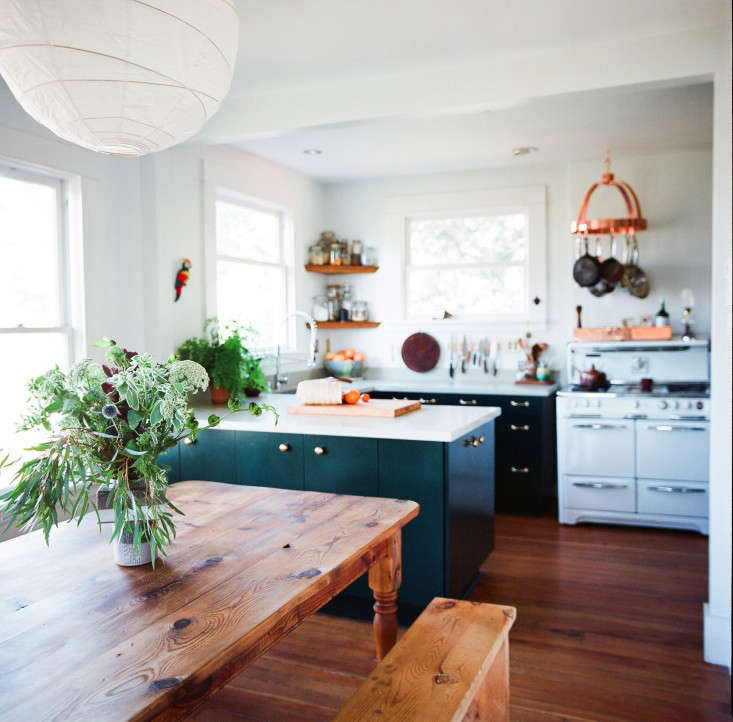 Above: In the open kitchen, the U-shaped layout of the cabinets separates the cooking area from the dining area. 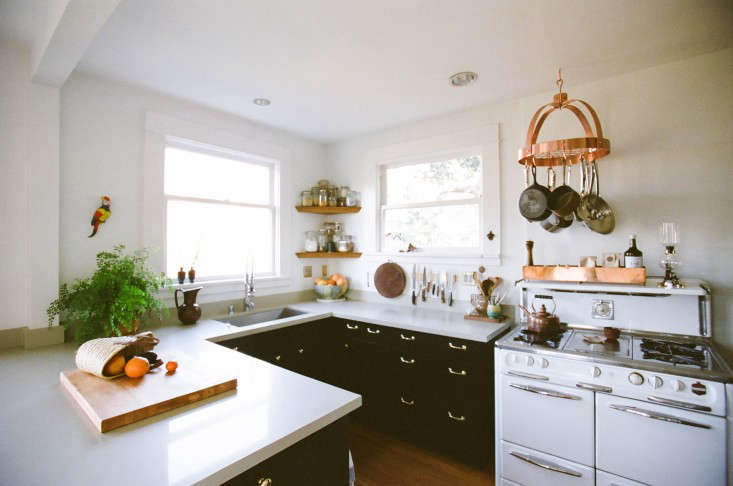 Above: The couple kept the as-found kitchen (including the Wedgewood stove), but removed all of the upper cabinets to open up the space, and added a Copper Pot Rack from Old Dutch International. 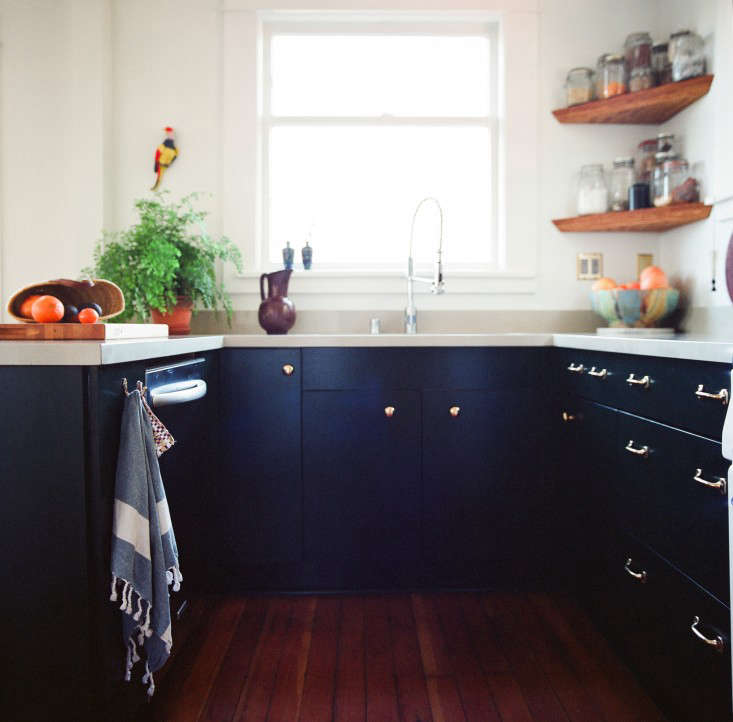 Above: Kathleen and Bradford updated the existing kitchen cabinets by painting them in Avocado Peel from Martha Stewart Living and adding brass pulls and handles from Crown City Hardware. “Repainting the cabinets a dark green helped to warm up the existing Silestone quartz countertops,” says Kathleen. 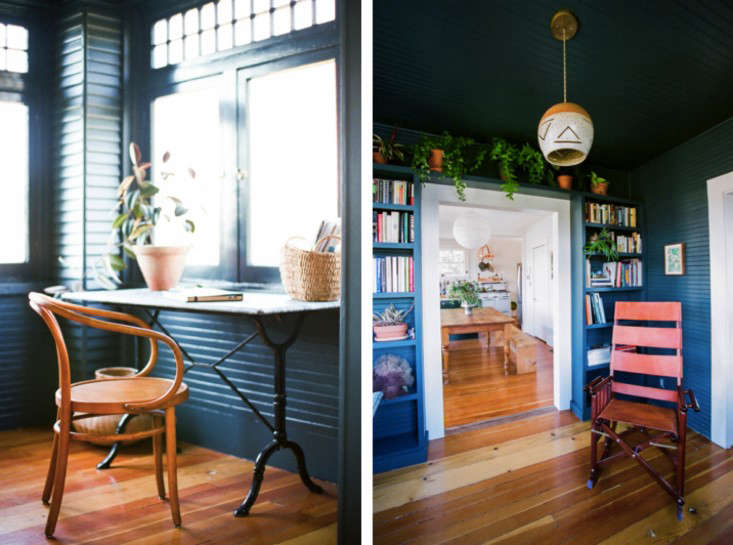 Above L: What was once an open sleeping porch was converted by the previous owners into a fully enclosed room, now the office and study. Farrow & Ball’s Hague Blue paint was used to draw out the texture and character of the original beadboard paneling. Above R: When the couple began working on the room, there was only one opening which led to the living room.They soon discovered that a door to the kitchen had been closed off. They reinstated that and surrounded it with newly built bookshelves. “This room gets a lot of afternoon sun, so the plants are very happy here,” Kathleen says. “Their greens and terra-cotta pots stand out from the deep green-blue of the wall.” The folding rocking chair is from Costa Rica. 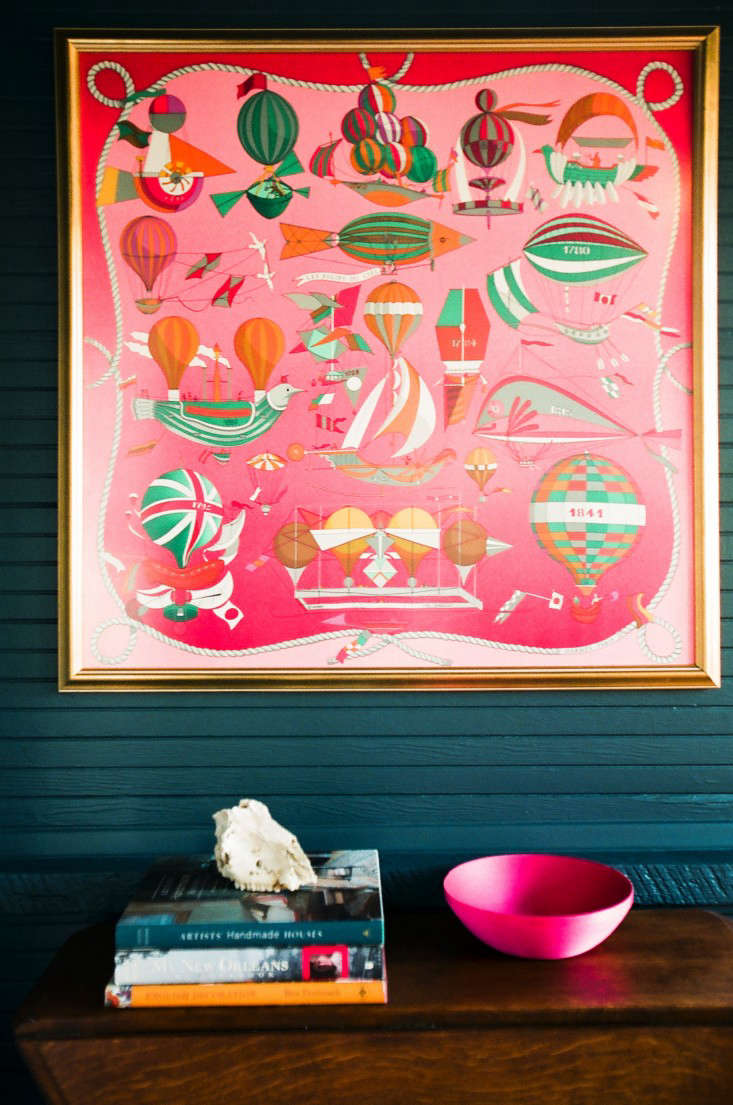 Above: A vintage Hermes scarf that came from an old family friend is framed as art; its colors are complemented by a Rieko Miyata Ribbon Project Bowl in the same fuchsia. 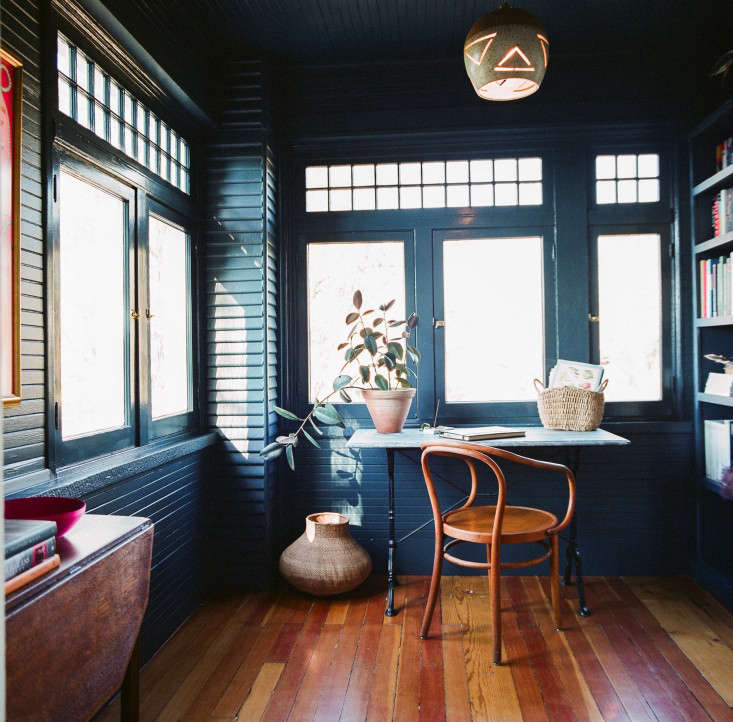 Above: A pendant light by Heather Levine hangs from the ceiling, and an outdoor café table with a marble top has been turned into a small writing desk. “I found the Thonet Chair under some things in the corner of an antiques shop in Summerland, near Santa Barbara,” says Kathleen. “The shop owner didn’t know she had it!” 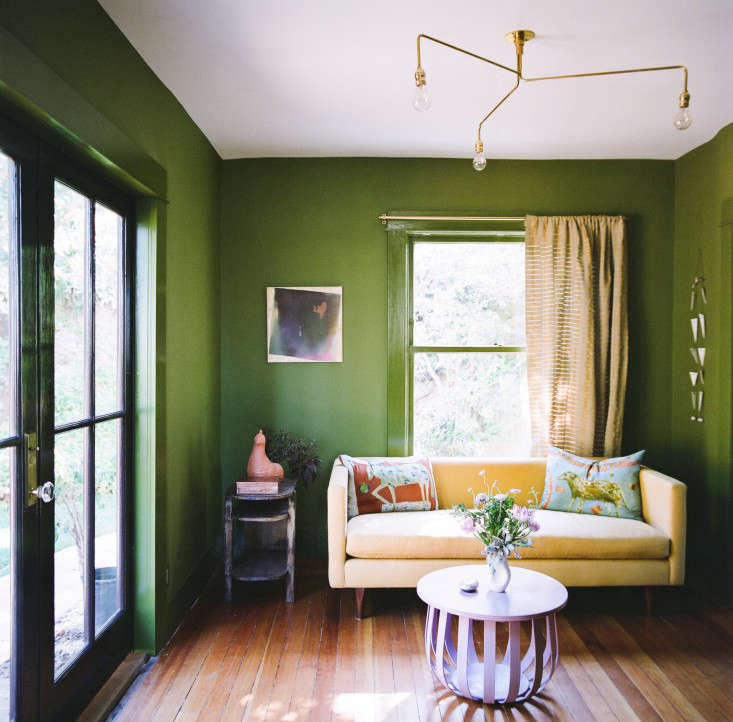 Above: In the TV room, Bradford replaced a window with new French doors that open onto the back deck and lawn. The paint choice–Mossy Rock from Martha Stewart Living on the walls with Mahogany from Farrow & Ball on the door trim–heightens the indoor-outdoor effect. The couch from Room & Board was previously a divan. When Kathleen had it recovered in saffron yellow linen, she asked the upholsterer to build a back to make it more comfortable. The curtains are African Aso Oke fabric. The ceiling pendant is by Ramsey Conder and the pillow covers are hand-painted silk by British artist Rose de Borman. Kathleen rejuvenated an “end of the day” coffee table find from the Rose Bowl Flea Market with coat of lavender-rose spray paint. 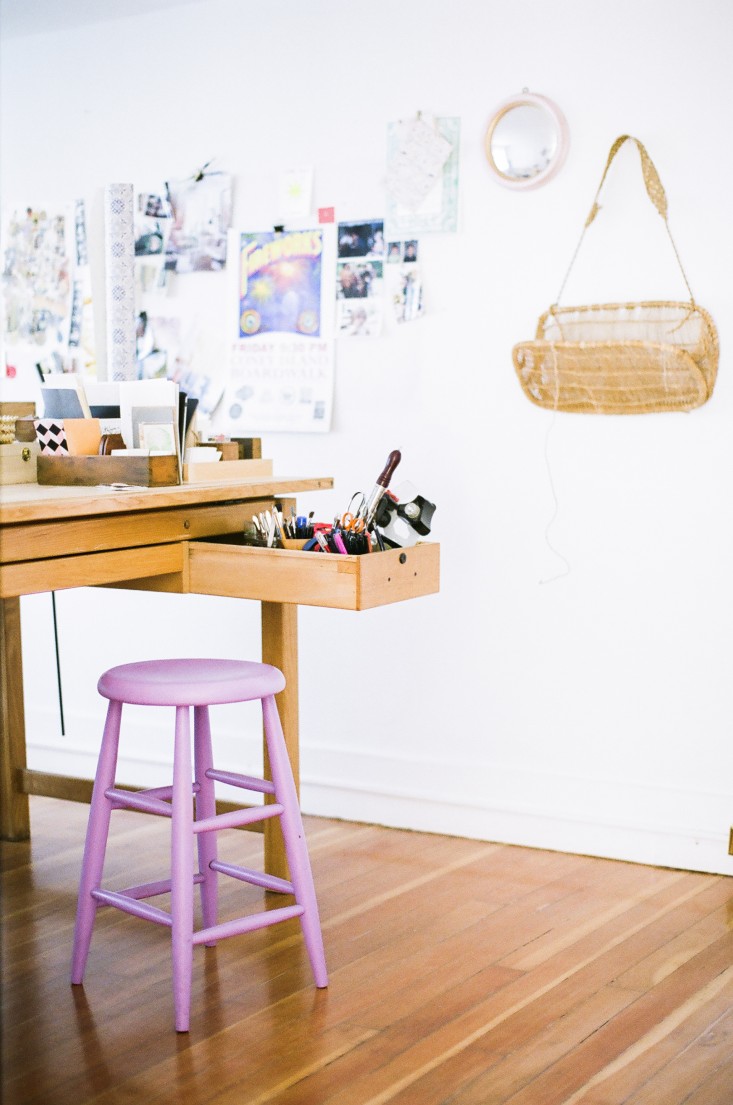 Above: In her studio upstairs, Kathleen works on a large drafting table that she acquired from an animator. It has a slide-out leaf that provides two work surfaces when required. The Mexican hanging basket is from her friend Beatrice Valenzuela’s new store in Echo Park. An old stool is freshened up with violet paint, while inspiration on the wall includes everything from old photos to fabric swatches. 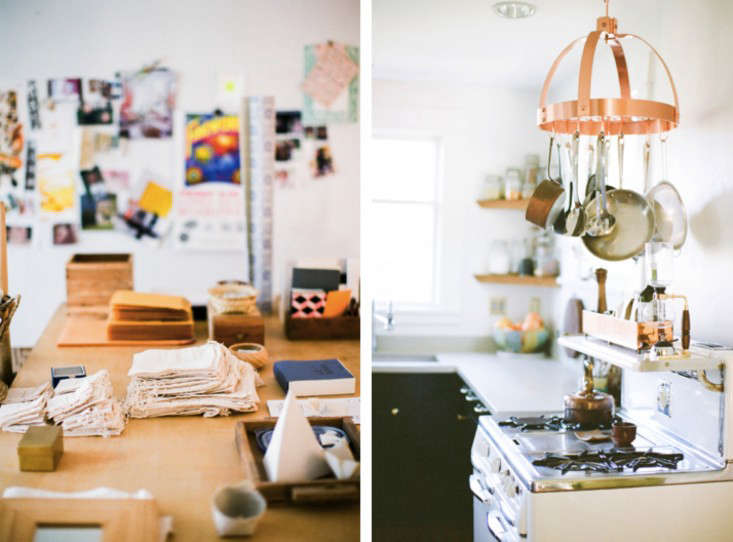 Above: “My studio and our kitchen are where many hours are logged–both are places of creativity, design, and nourishment.” 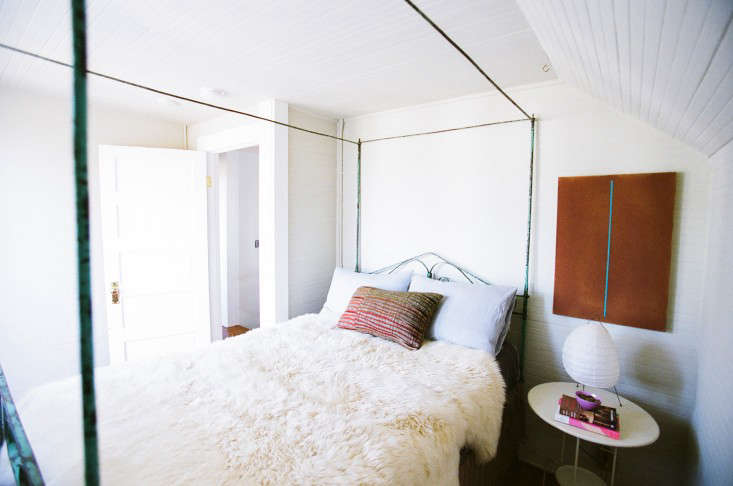 Above: The beadboard-paneled guest bedroom was most likely a sleeping porch like the office/study below. Remnants of turquoise paint on the antique iron bed frame work well with the painting by Margaret-Anne Smith. 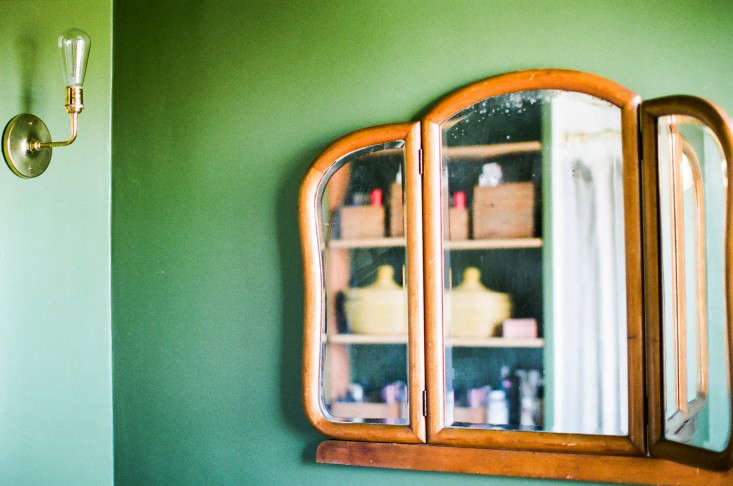 Above: In the bathroom, the couple hung a wood-framed vintage mirror from the Rose Bowl Flea Market onto walls newly re-dry walled and painted Bonsai from Dunn Edwards. The bronze Satellite Sconce is from Schoolhouse Electric. “A lot of our furnishings are found, traded, or made by hand,” says Kathleen. “It’s hard to find brand-new furnishings that have genuine character.” 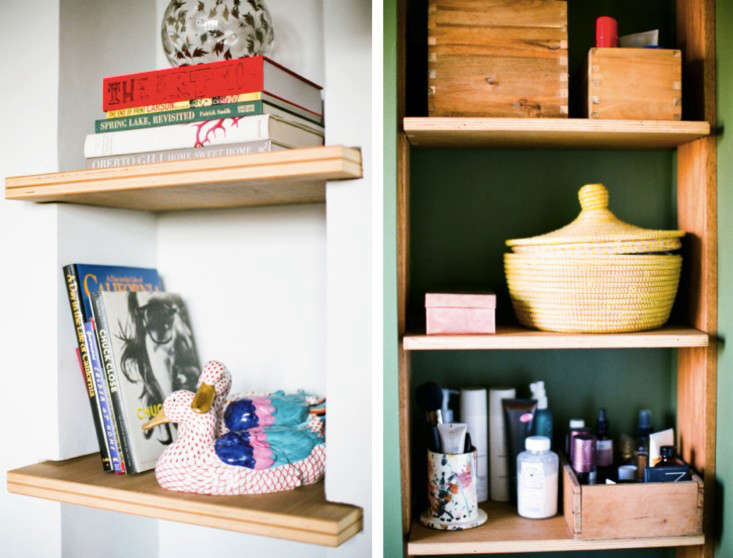 Bradford built shelving throughout the house. Above L: He notched plywood shelves into a wall in the living room. Above R: In the bathroom he ran a wooden frame around the opening before installing the shelves. 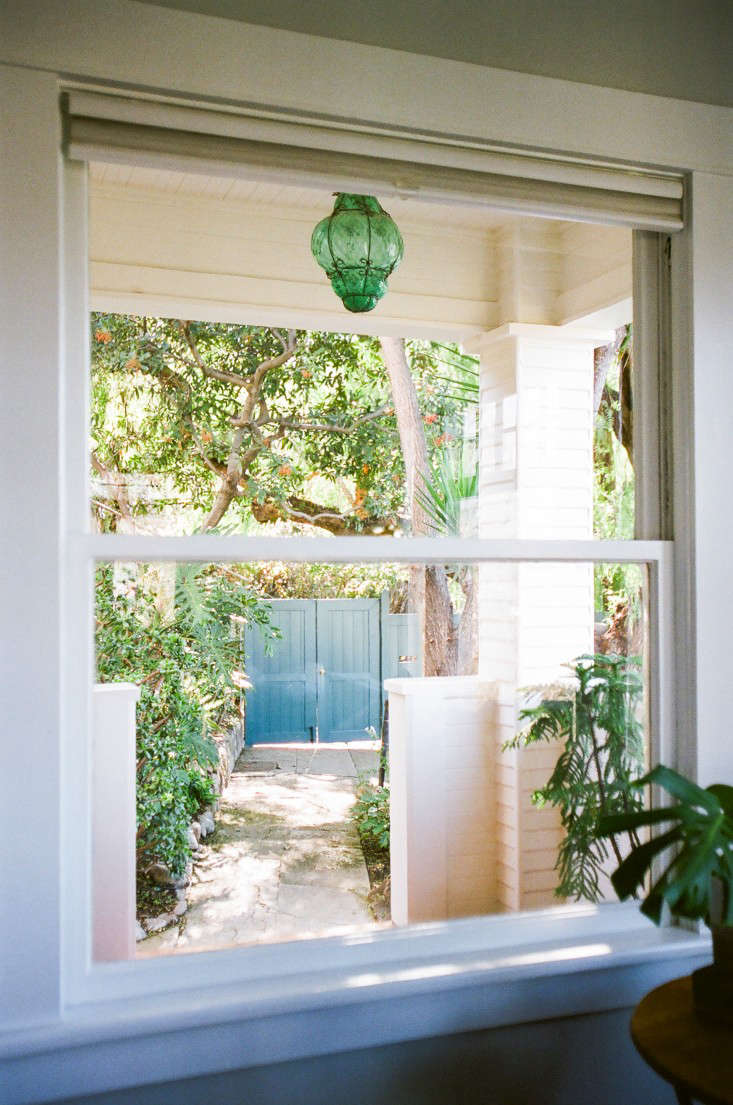 Above: Thanks to a relocated window in the living room, the couple have a view onto their garden. A vintage Venetian glass pendant blends in well with the exterior foliage and Benjamin Moore Olympus Green-painted gate. See the full extent of Whitaker’s garden on Gardenista.

Interested in taking a tour of the garden? Go to Garden Visit: A Tropical Paradise in LA’s Echo Park on Gardenista. The Whitaker’s Echo Park neighborhood is teeming with creatives, including lighting designer Brendan Ravenhill–see Live/Work in Echo Park: A Designer at Home. Their local green grocer, Cookbook, also has a creative edge.

The Architect Is In: The Twice-Designed New York Loft

Turn on the Brights: The Veronica Valencia Collection From Barn Light Electric