Tom Scheerer has been called the Billy Baldwin of our day. A designer with a knack for combining the composed (he trained as an architect at Cooper Union) with the comfy, and the high with the low, he specializes in the “potently atmospheric” writes Mimi Read. Read is the author of Tom Scheerer Decorates, an impressive compendium of 15 years of work that came out last winter.

As is almost always the case with decorator’s designs, we especially admire Scheerer’s own houses in which his practicality and old-fashioned graciousness have been granted free reign. To launch our Life Aquatic issue, Scheerer agreed to give us a tour of his two Harbour Island cottages in the Bahamas that he lovingly overhauled. (And then, like a lot of serial remodelers, he moved on to the next: he’s currently building a beach house from the ground up on the Bahamian island of Abaco.)

Photographs by Francesco Lagnese courtesy of The Vendome Press. 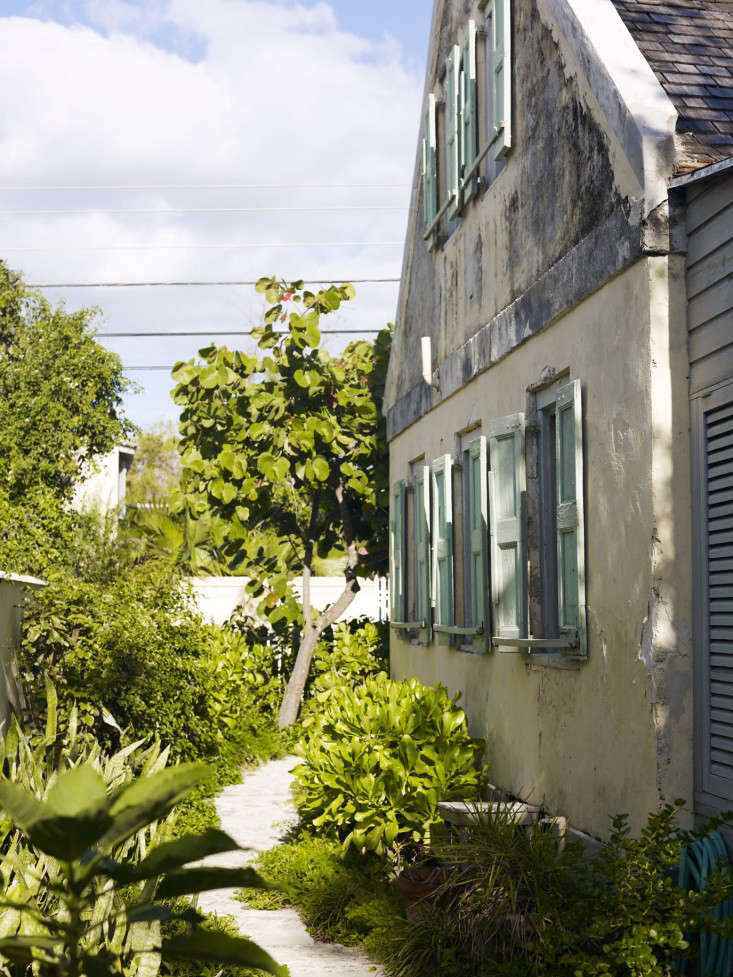 Above: Dubbed the Cash Box–because it previously belonged to Mary Cash, one of the matriarchs of Harbour Island–Scheerer’s 1800 guest house is situated across from an old convent that he revived and turned into his main house. Of the Cash Box he says, “I restored and modernized being mindful of its historic and rustic (but atmospheric) qualities.” Both structures are built of coral stone blocks quarried when the basements were excavated. “The original wood parts–roof, floors, ceiling, and interior walls–were made from a native wood known as Abaco pine that admirably survived even though the houses were in ruin.”

The good news: We’ve just discovered that the Cash Box, now known as the Salt Box, is available for rent. Go to Salt Box on VRBO for details. 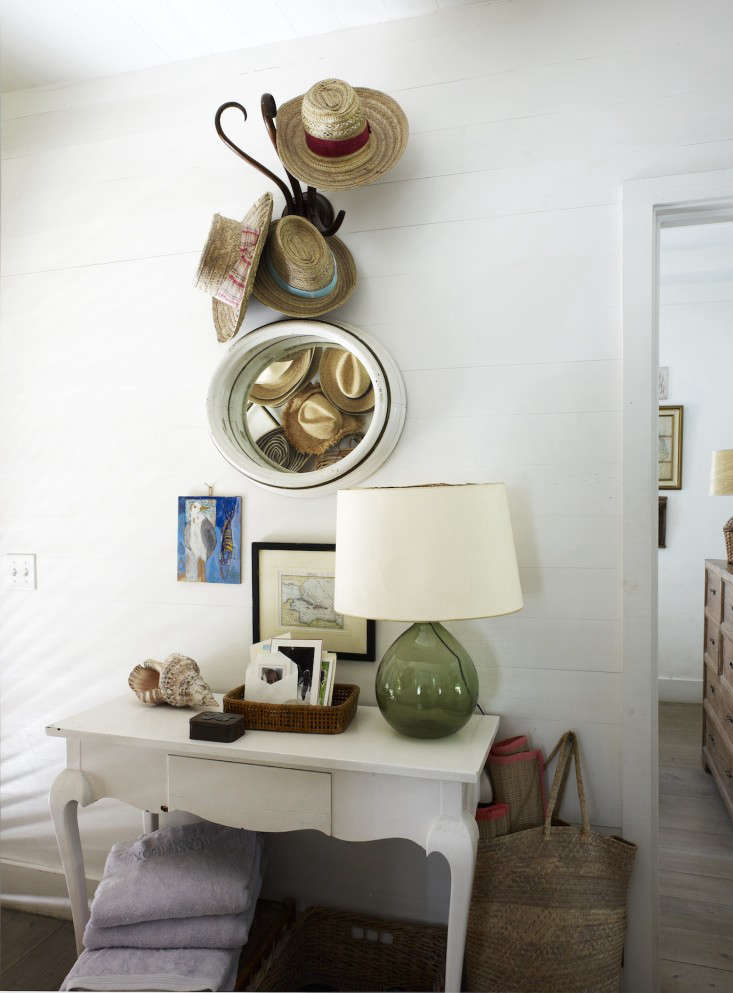 Above: The Cash Box entry has “a junky white painted table with a convenient drawer,” says Scheerer. Hats hang on Thonet hooks and beach towels and mats are at the ready. 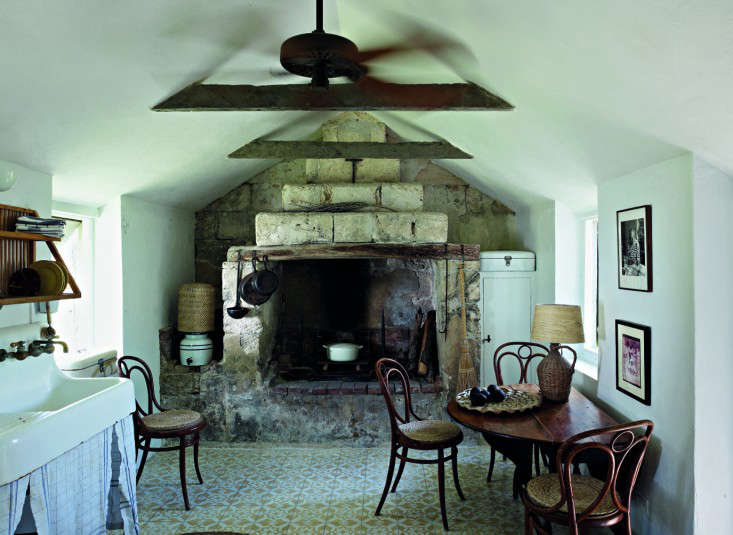 Above: The Cash Box’s original kitchen is housed in its own outbuilding.  The kitchen had been modernized in the 1940s,” says Scheerer. ” I revealed the coral stone hearth and restored the structure, keeping the mod cons–stove and fridge–out of sight.” Scheerer likes to take a preservationist approach to his remodels: “He’d rather work with a house more or less the way he finds it than expensively deracinate it with a gut renovation,” explains Read in Tom Scheerer Decorates. But, she says, he also has a practical streak: “‘Don’t make too much trouble for yourself’ is one of his mottos. ‘Live life now, rather than after a torturous renovation.'” 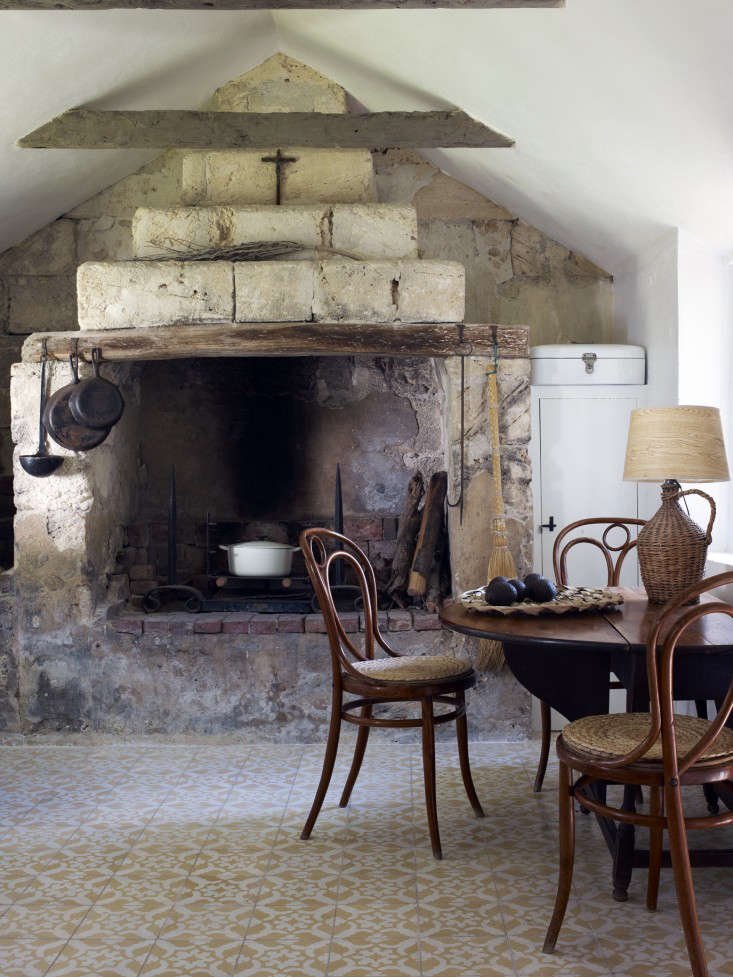 Above: Scheerer added encaustic cement Cuban tiles over the kitchen’s cement floor. “Cuban tiles are very at home in the Bahamas; they’re found in most of the oldest houses,” he says. Now made in the Dominican Republic and Mexico, they’re available through Villa Lagoon Tile. 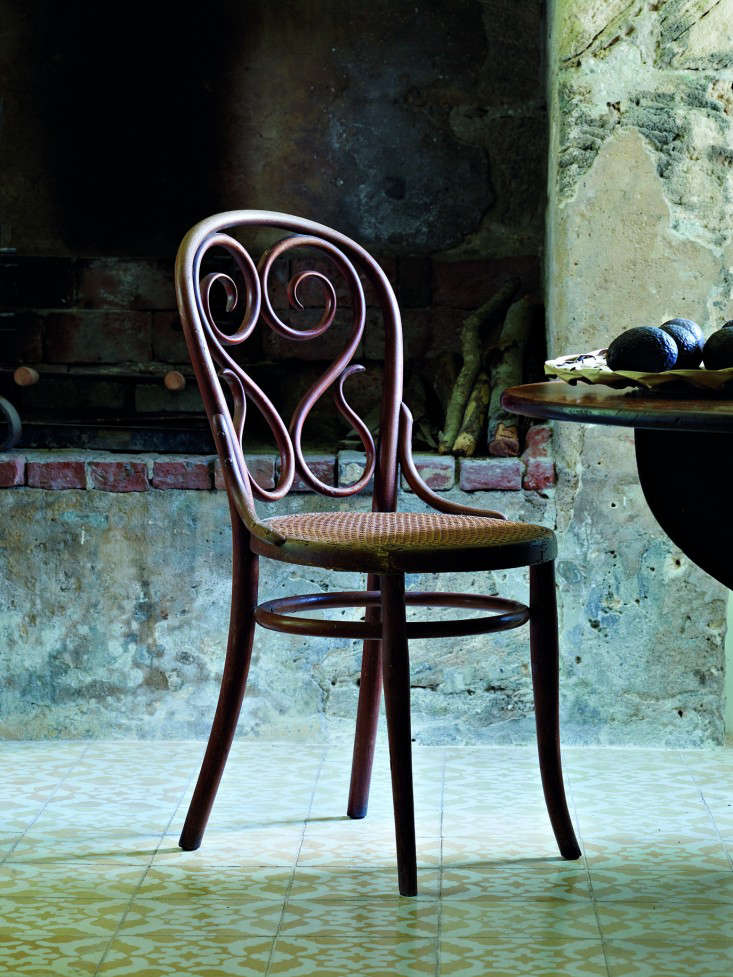 Above: Scheerer has a weakness for old Thonet bentwood chairs: “I collect them whenever I can; I find them useful in rustic and in urbane interiors.” 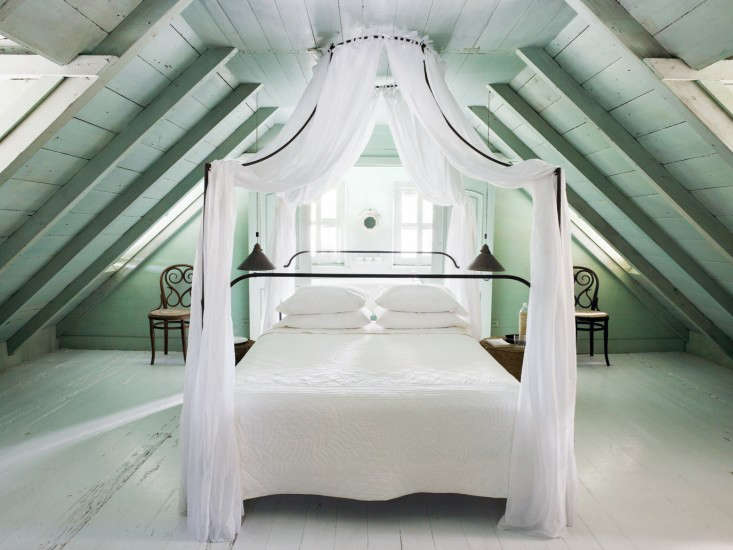 Above: The Cash Box attic is now the master suite. It had a rough pine floor that Scheerer painted with “many, many coats of shiny white: the white floor bounces a lot of light into the room and off the ceiling.” The seafoam green walls are, writes Read, “a nod to a Harbour Island old wives’ tale about the wasp-repellent properties of the color green.” Scheerer found the iron campaign bed at Anthropologie. 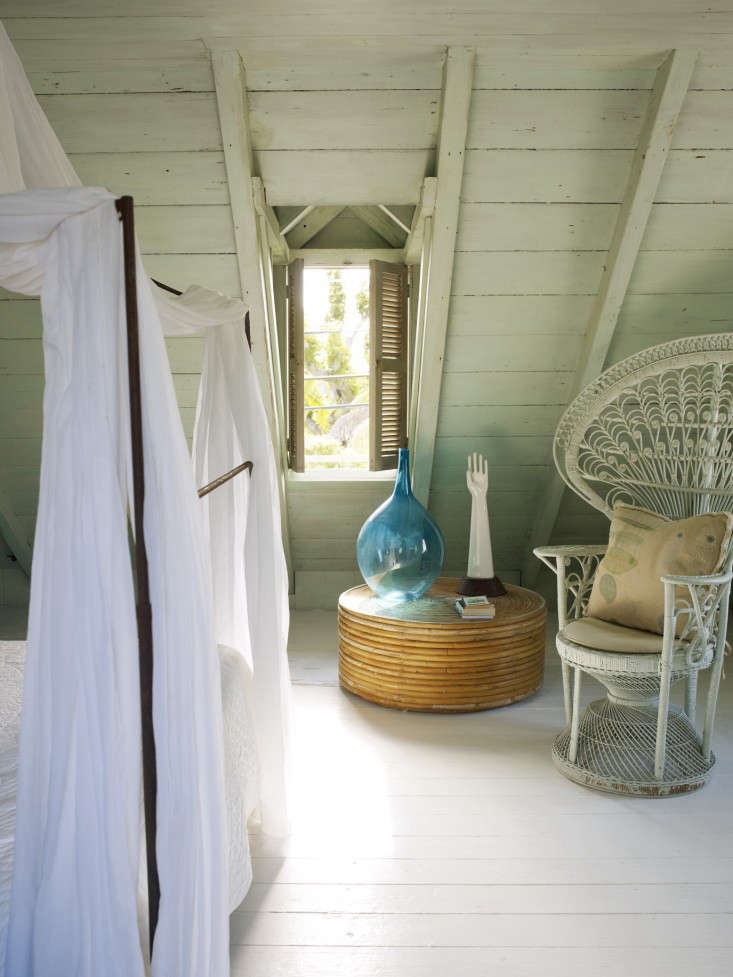 Above: A peacock wicker chair stands next to the bed and one of the attic’s shuttered windows: “There were no windows at the dormer and gable-end openings, only shutters. I added louvered interior shutters for privacy (with a breeze). No screens. No glass.” 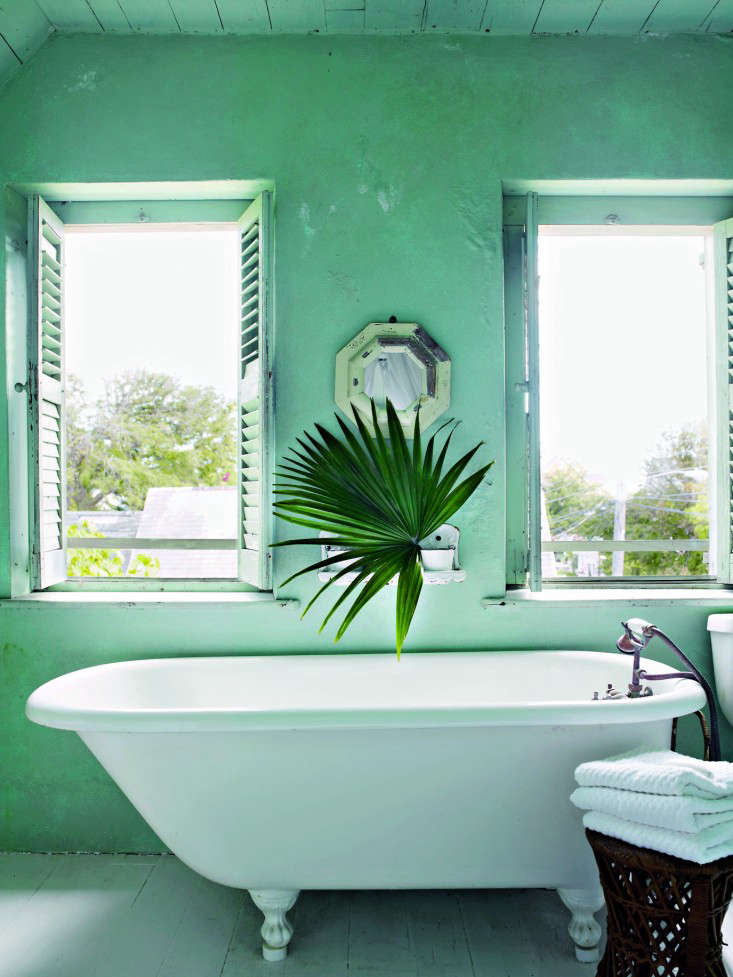 Above: One of the great luxuries at the Convent is a new bathroom with a claw-footed tub that Scheerer went to great lengths to get to the island. As in the Cash Box attic, the windows have shutters only. 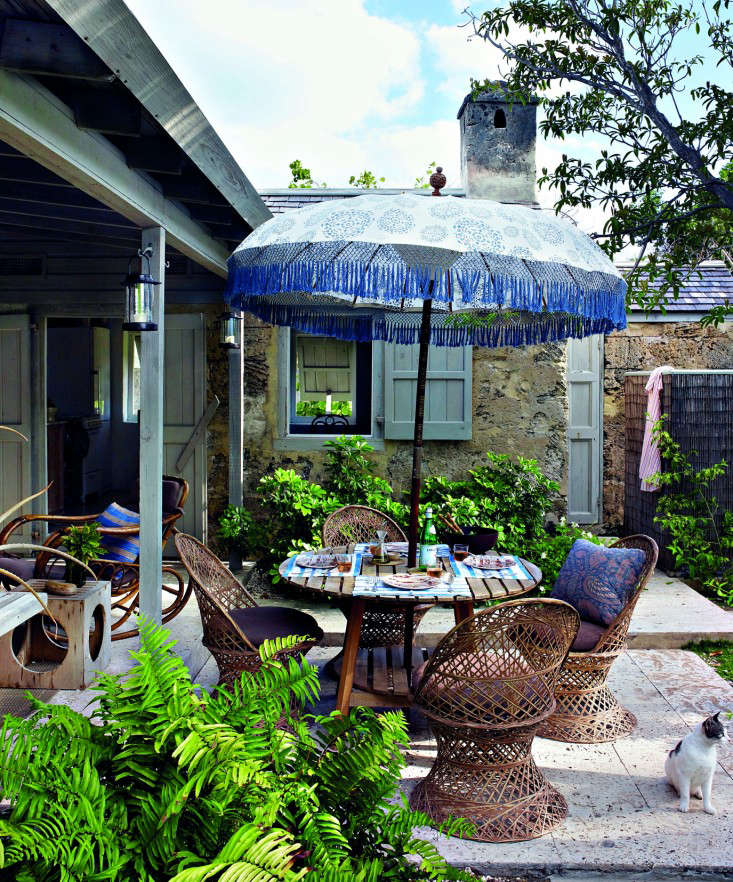 Above: At the Cash Box, Scheerer built a simple outdoor dining area “proximate to the kitchen and porch.” The table is shaded by a Balinese parasol. 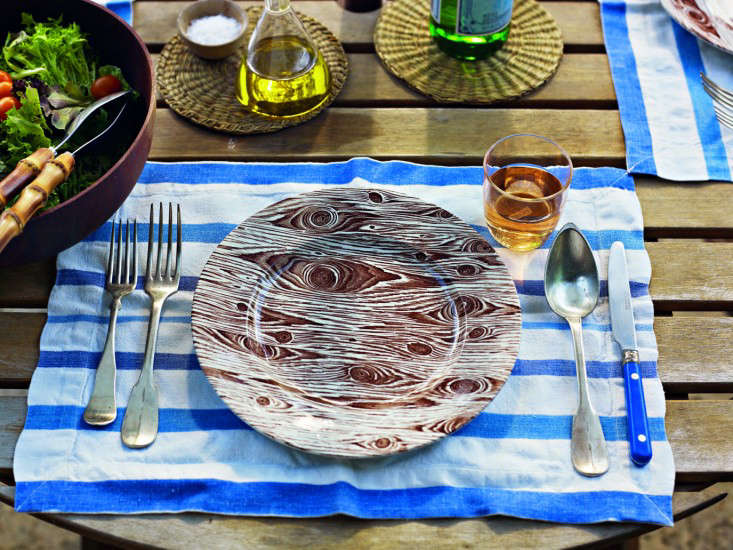 Above: “Lunch is my favorite hobby–and no sandwiches!” says Scheerer. The faux bois plates came with Martha Stewart. 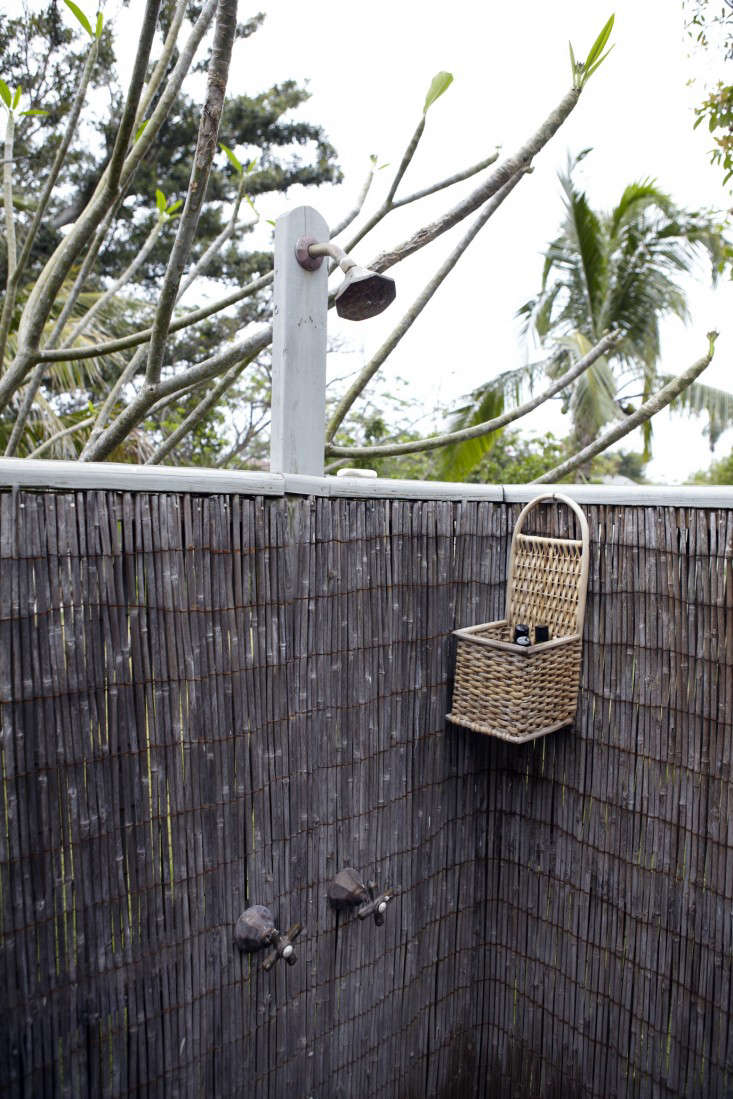 Above: One of the final–and best–additions made to the Cash Box: a bamboo-fenced outdoor shower.

For more beach design, browse our Photo Gallery and have a look at our recent posts: The Outermost House: Modest Modernism in Wellfleet and Architect Visit: A Louvered Beach House on the Arabian Sea. And over on Gardenista, consider Rustic Living on the Beach in Uruguay.

Table of Contents: The Life Aquatic