I feel like a criminal every time I open my refrigerator and see wilted lettuce or old limp celery, or cilantro that turned to a slimy mush in the crisper drawer. This is food I bought on a whim without a plan. Or maybe I needed a tablespoon of fresh herbs for a recipe but was forced to buy a bigger bundle and never used the rest. Whatever. It’s wrong.

The other day as I was cleaning out the refrigerator, I realized this has to stop. The average American throws away 20 pounds of food a month, the equivalent of tossing dollar bills into the garbage. But I personally also have a second food storage problem: hoarding random condiments. All these jars of weird sauces and jellies clutter the refrigerator shelves. Do I need seven kinds of mustard? I know that a lot of jars last forever, but am I going for some kind of a record with the tahini? How did my refrigerator turn into the equivalent of one of those forlorn U-Stor-It lockers that you rent by the side of the highway?

So I came up with a plan to stop wasting money on food we never end up eating. I decided to grow more of my own food so I could buy less of it. And I wanted to grow just enough to eat each day, to avoid waste. I went to the nursery and bought six-packs of lettuce seedlings and herbs and tomato plants. Then I drove home and surveyed the sunny spots of my garden: where could I fit this stuff into the existing garden?

I don’t have the time or extra creative energy this year to create an entirely separate vegetable garden (or even to build a couple of raised beds) so I came up with this idea: a random vegetable garden. 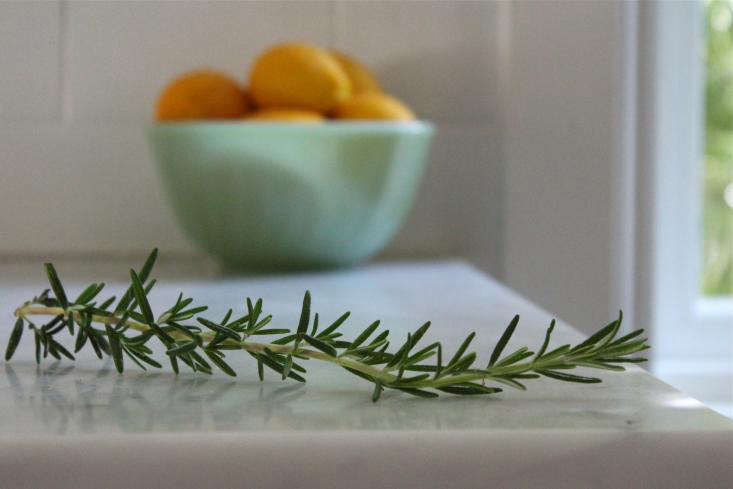 Above: One stalk of rosemary is about the right amount to cut up and toss in with the roasted potatoes. So why am I buying a big bunch of it for $1.99?

Here’s how the random vegetable garden works. You look for a bare, sunny spot in the garden, and dig a hole. Insert basil seedling. Or chives. Or arugula. The end.

If you have no bare spots, pull out something you didn’t like that much to start with and replace it with food. If you have no outdoor space, plant a pot of herbs on your kitchen windowsill. If the only sunny spot in your apartment is the living room, that’s fine too; edibles are as ornamental as any other house plant.

Last week I planted tomatoes, lettuces, and herbs–all near the edge of the flower beds, so it would be convenient for me to harvest what I need for a single night’s supper–and vowed not to buy any of the same from the grocery or the farmers’ market this summer. We will eat what we grow, period.

Maybe this sounds naive. Or like the grownup equivalent of trying to play Little House on the Prairie (which in fourth grade involved wearing gingham aprons and trying to churn butter by shaking milk in a jar). I am prepared for failure. On the other hand, if this experiment works, I will have spent $50 at the nursery for a summer’s worth of crops. 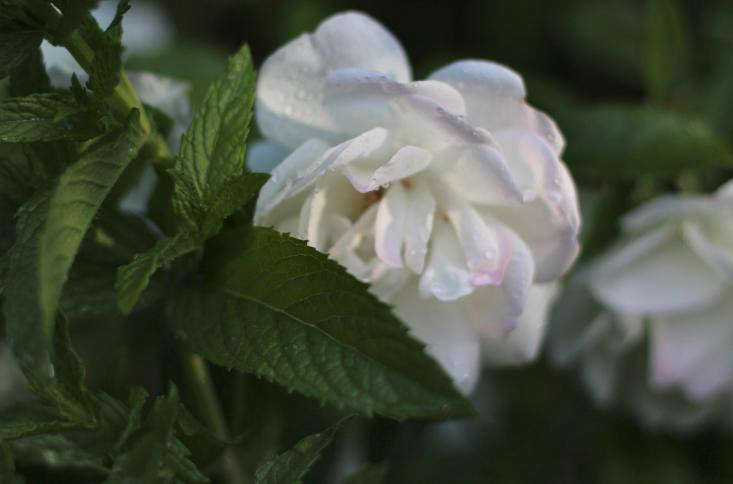 Above: Modeling success. I got the idea for the random vegetable garden from my roses. See how happily they are co-mingling with mint? I didn’t plan this; it’s a random herb garden. The mint grows around the base of the roses to cover bare roots as nicely as any ground cover. And the rose roots are strong enough to hold their ground against the mint. It’s as if they were meant for one another.

Impact: Mojitos. We won’t have to go to the store and plop down $1.99 for a bunch of mint when we want to make a mojito. Or throw out the uneaten bits guiltily a week later. Instead we will head outdoors and snip the exact number of mint stalks that we need. 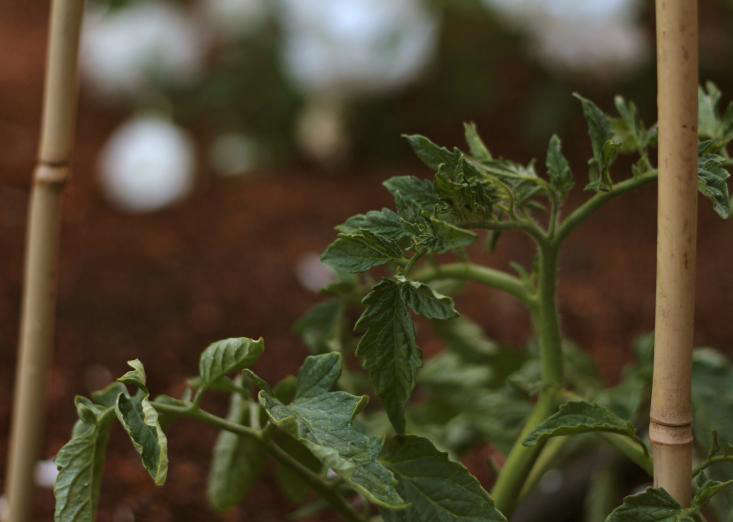 Above: A Green Zebra tomato plant, against a backdrop of roses in my garden.

As part of my random vegetable garden plan, I planted five tomato bushes–including beefsteak, plum, and cherry varieties–and built bamboo teepees to protect them from the onslaught of the nearby flowers. Will they thrive? I’m betting yes. 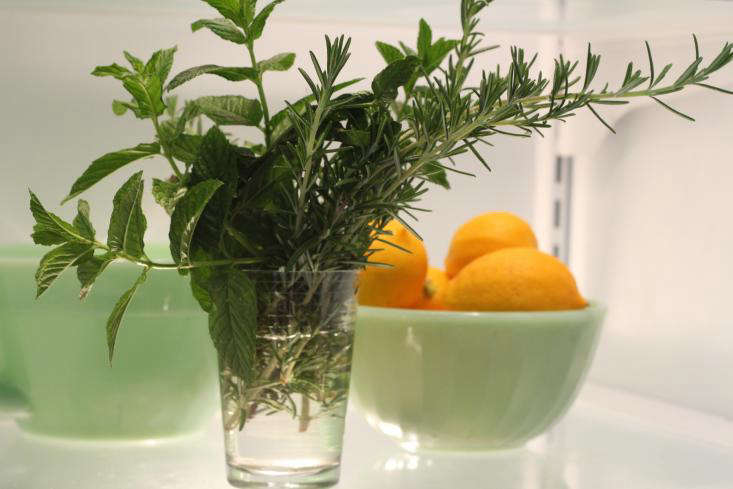 Above: I am off to a good start because I already have a Meyer lemon tree in my garden. The rosemary came from Julie’s house, where she has a 15-foot-long hedge of it growing against a fence.

I think the random vegetable garden will work, because I can already see the little lettuces looking strong and determined to get big enough to produce dinner, one salad at a time. The challenge will be to keep the lettuce coming all summer: I’ll have to figure out the right timing to plant successive crops of it. 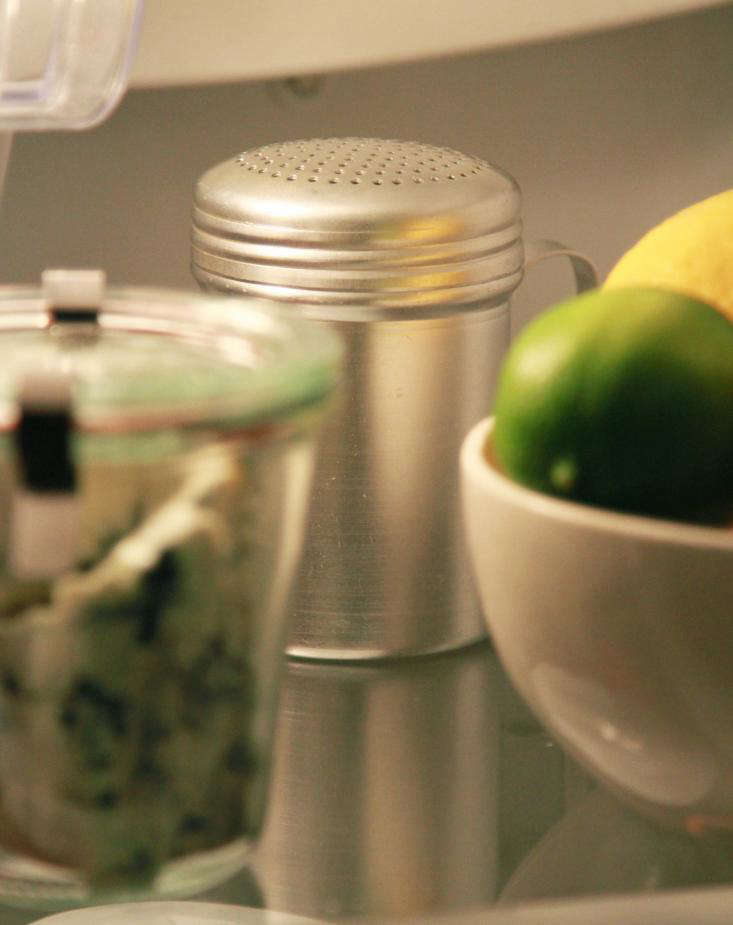 Above: Photograph by Erin Boyle.

A second prong of my plan is to stop buying jarred condiments. The other night at dinner, I floated the idea to my family.

Me: If you like ketchup, imagine how good homemade ketchup would taste. We’re growing tomatoes, after all.

Family (in unison): Terrible idea! Takes too long to make! And by the way, we like having seven kinds of mustard to choose among. It makes us feel safe to have a lot of weird mustards in the refrigerator.

Me: You never eat this stuff. It just sits there until it gets moldy.  And if it’s an effort to make the condiment, that’s OK. That’s mindful. That means you really wanted it to be a part of your dinner.

That’s where we are at this point. I am thinking of waiting until the tomatoes are ripe and then whipping up some homemade ketchup–stealth ketchup, as it were–to win them over.

What about you? Are you growing any food? Tell me about it in the comments section below.

Quiet Color in the English Countryside

Fabrics and Linens from Danish Oyoy