“I’m interested in trying new things, building stuff, staying curious, being outside, and spending time with friends,” said Greg Hennes. “If I get curious about something in my personal life, I’m likely to pursue it as an opportunity.”

This is the short version of the founding story of the Jennings Hotel—a reincarnated five-room outfit in rural Joseph, Oregon, not far from the Idaho border. Hennes, whose entrepreneurial record includes founding Clutch Camera, Antler & Co., Campfire Cologne, and the Portland Bazaar, stumbled upon the 1910 Jennings building when searching for a cabin property. “It needed, and needs, a ton of work,” he said, “so it took me four years to make the decision to buy it. Even though it’s absolutely nothing like a cabin, the place and community were perfect.” Hard work, a collaborative community, and $107,070 Kickstarter dollars later, Hennes turned his latest curiosity into a working hotel.

Photography by and courtesy of Greg Hennes. 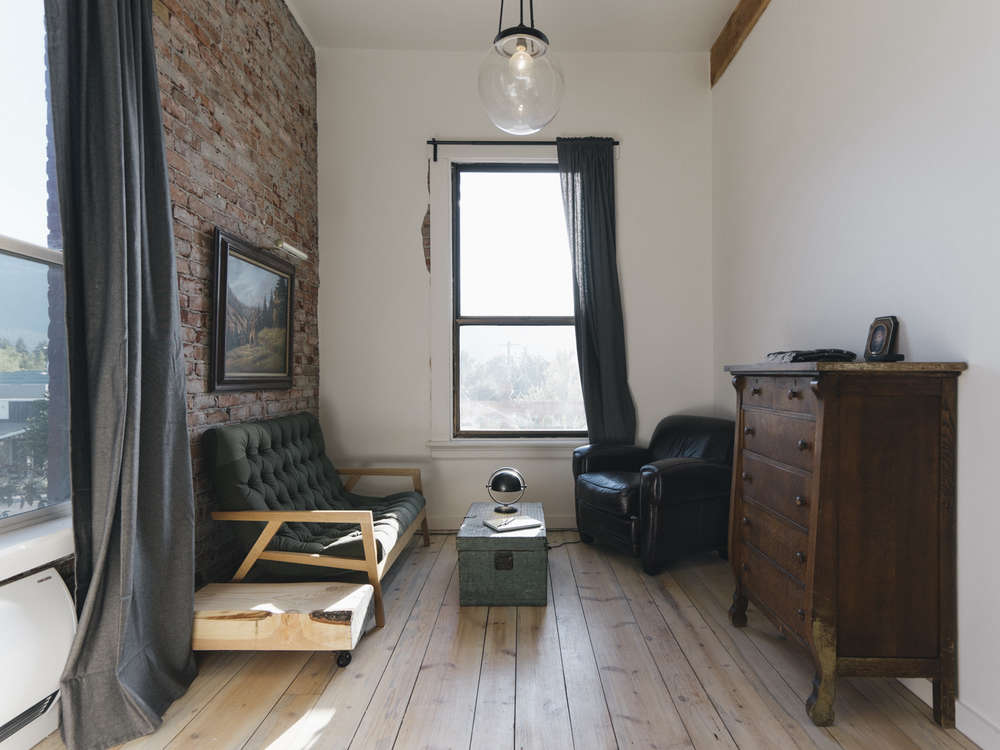 Above: Hennes called on the artists and makers in his regional network to design and contribute pieces to the rooms. Room 3A, shown, was jointly designed by Matt Pierce of Wood & Faulk and Ben Klebba of Phloem Studio, both in Portland, Oregon, and features an original brick wall, a Regina Loveseat from Phloem Studio, and a Boone Armchair from Rejuvenation. 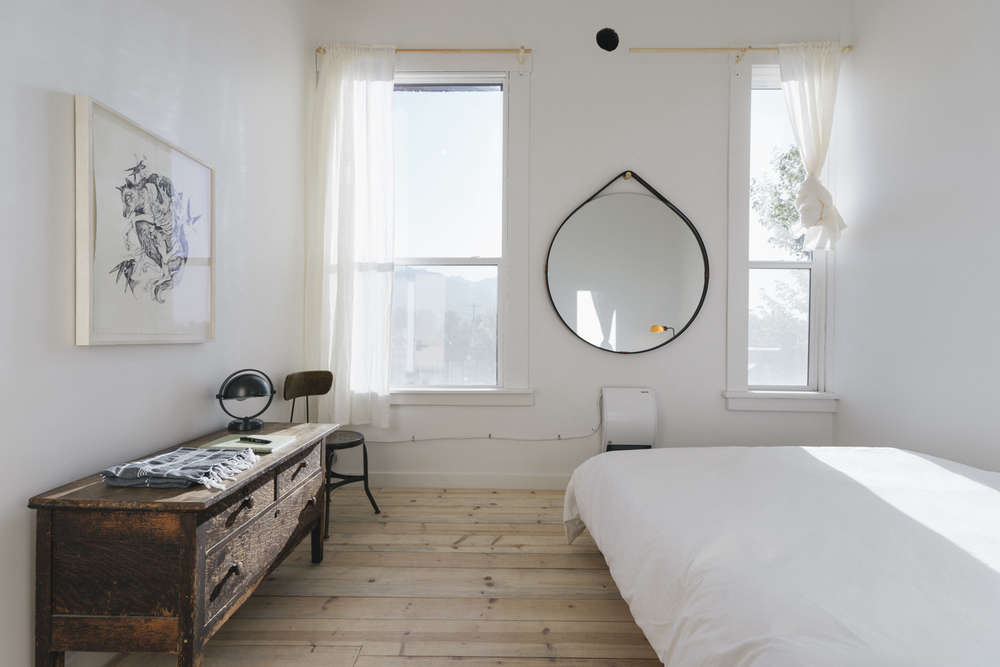 Hennes chose the guest designers by their aesthetic sensibilities and gave minimal direction and a $20 per square foot budget to each. But lighting and furniture brand Rejuvenation (founded in Portland and now part of the Williams-Sonoma group) stepped in to offer a generous furnishings allowance to each designer. “Without Rejuvenation, this would be a very different project,” says Hennes. 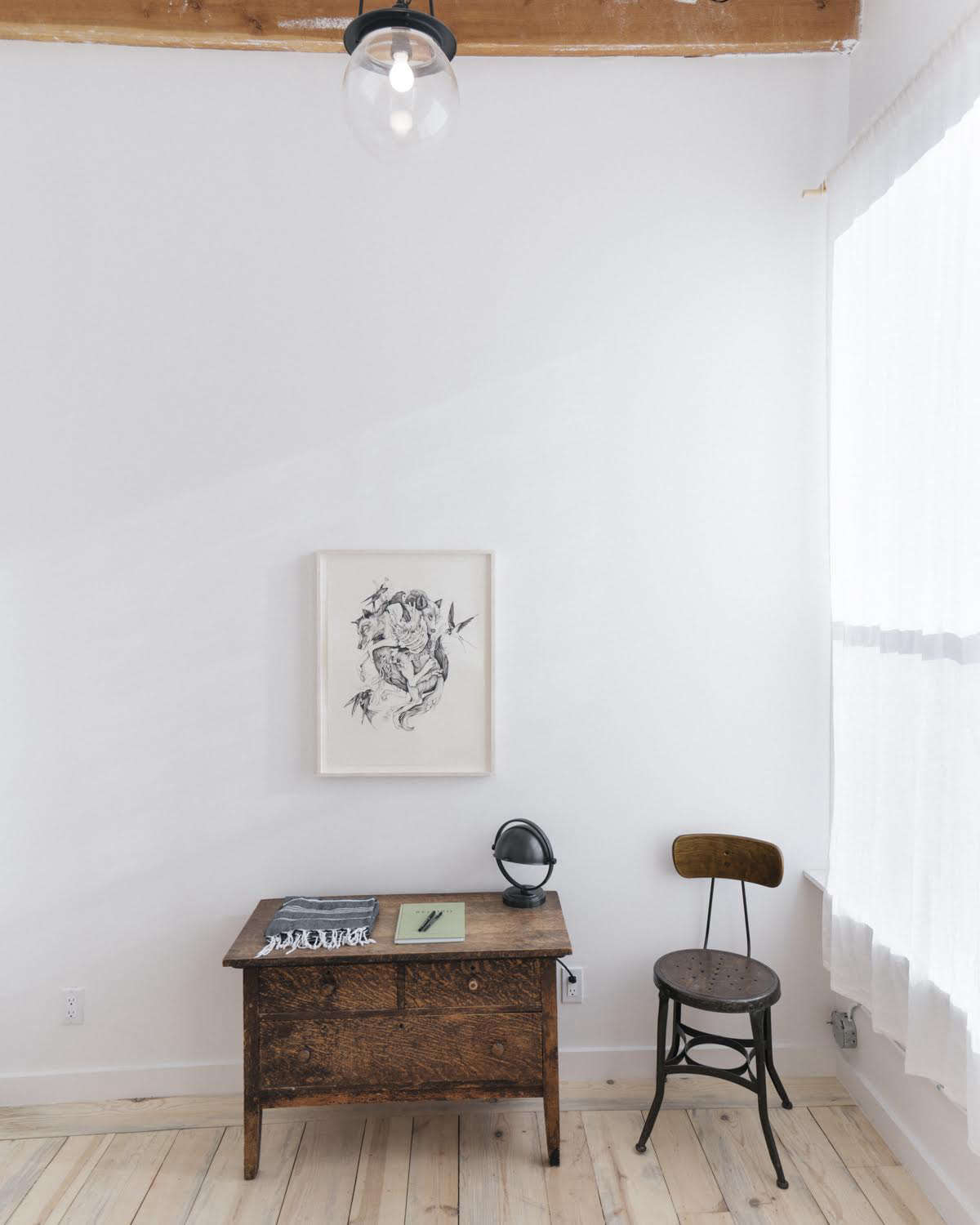 Above: Part of the Jennings’s raison d’être is as a place for art and artists; its Artist Residency program has produced a number of furnishings used throughout the hotel. Above the desk in 3B hangs a drawing by artist Christina Mrozik, the Jennings’s first artist in residence. 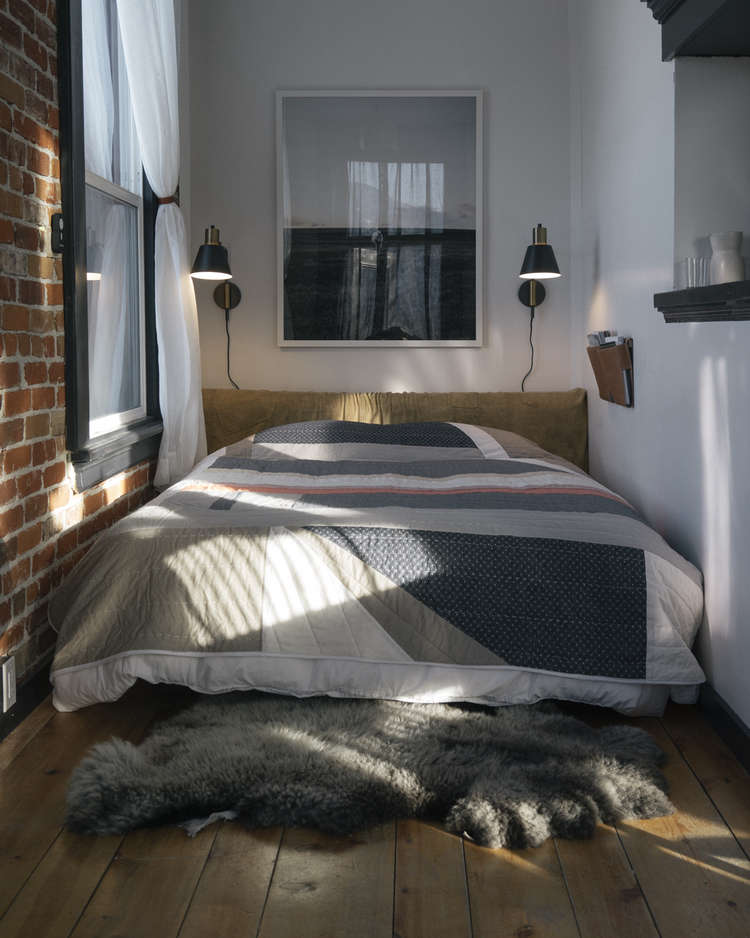 Above: Room 2, designed by Ashley Tackett, is “an expression of elegant Nordic design.” The bed has a headboard by Portland’s Revive Designs, quilt by former artist-in-residence Zena Verda Pesta, custom wall magazine holders by Wood & Faulk, and lighting from Rejuvenation.

Though Hennes hails from Minnesota, he’s fallen hard for the small town of Joseph, Oregon. “This place just has a magical presence that I couldn’t shake,” he said. “I knew I wanted to be in a small town in the mountains, and here I found it.” 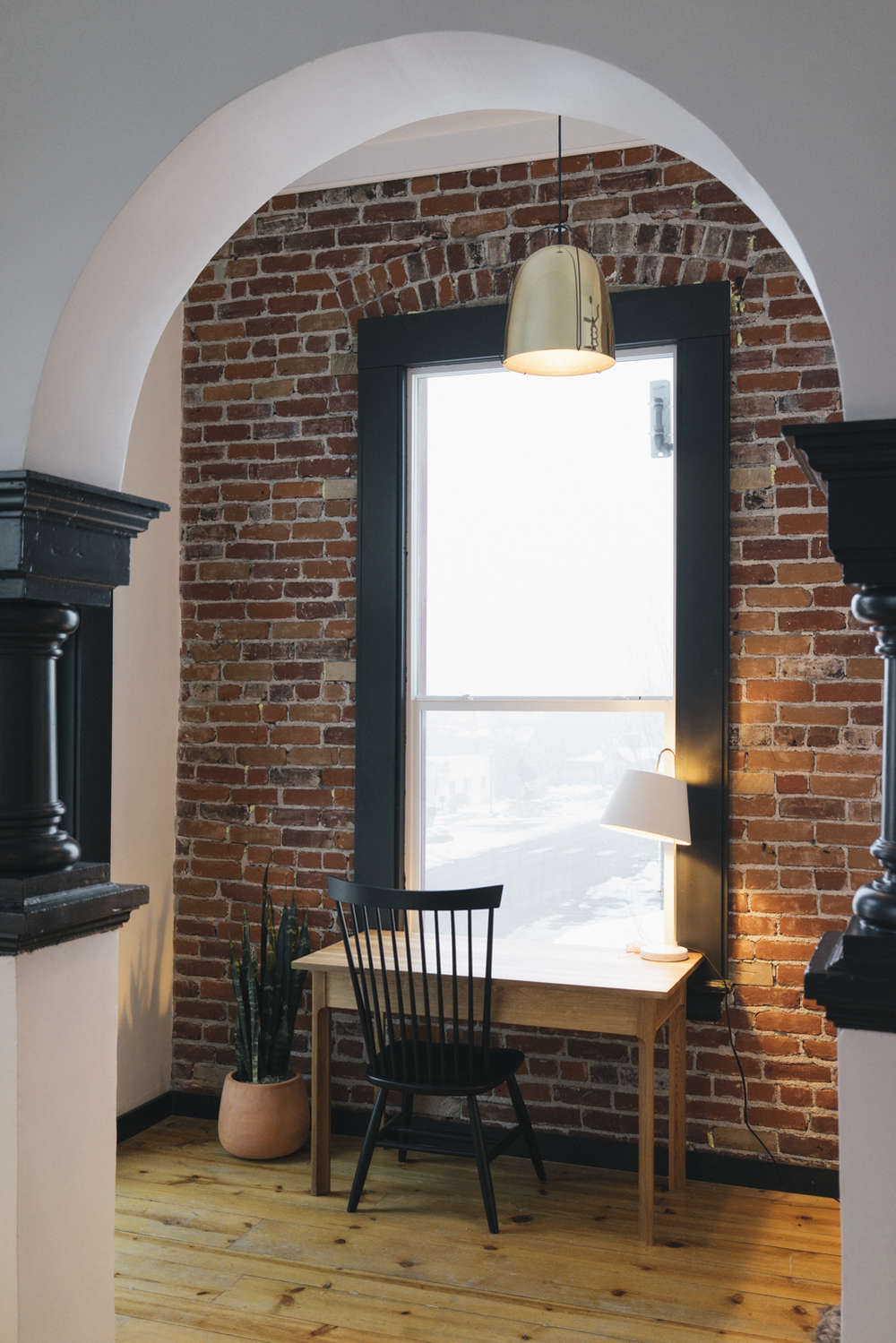 Hennes cites the natural surroundings of Joseph as the Jennings Hotel’s primary draw—”Wallowa County contains some of the most incredible scenery anywhere”—but he notes that the hotel’s vibe also attracts “young, creative [people] interested in design, art, and architecture.” But Hennes shares the love, citing a “confluence effect” of like-minded ventures in the region, including Tyler Hays’s M. Crow & Co., Minam River Lodge, and the OK Theatre, all in Wallowa County. 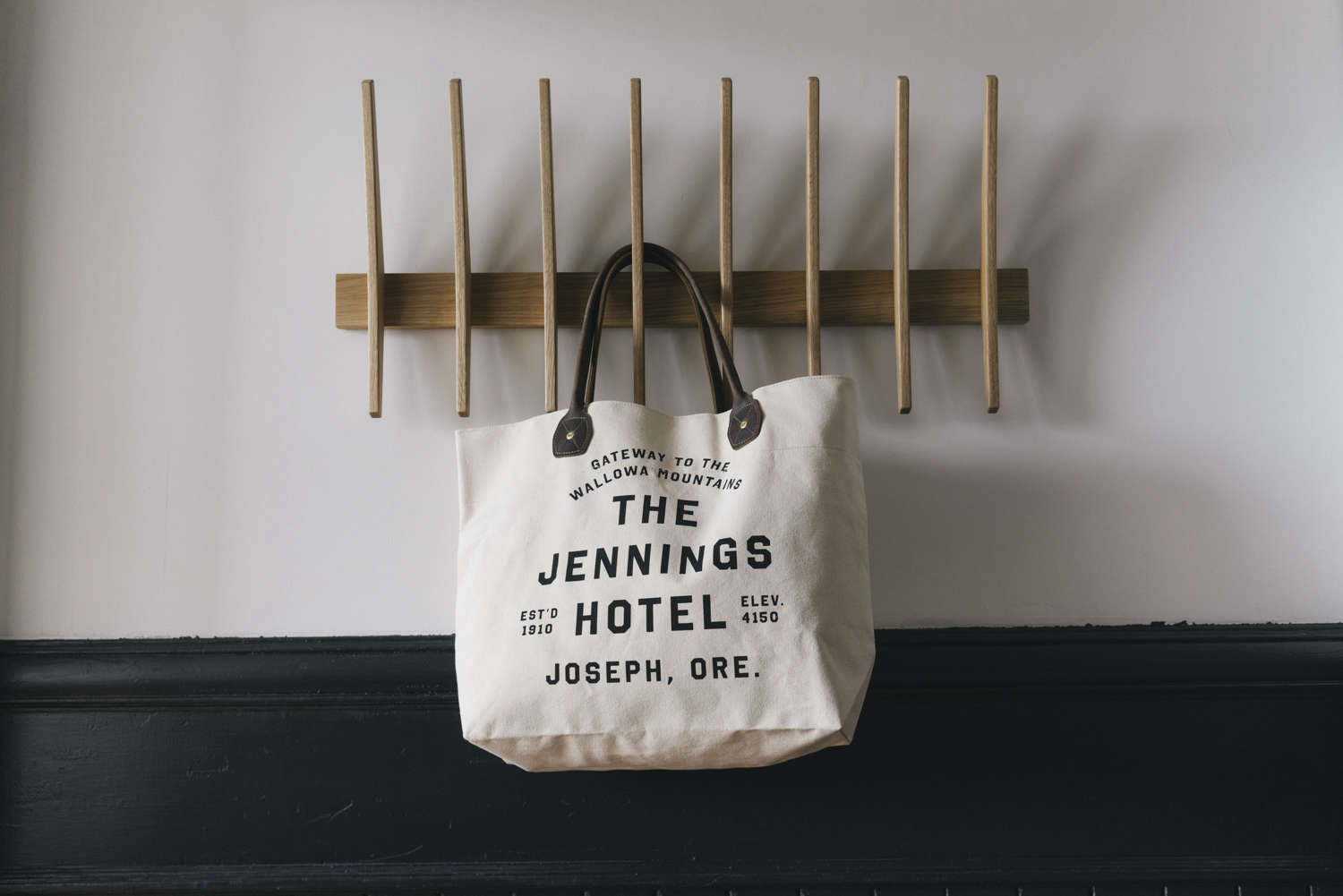 Above: Farrell’s Fin Coatrack graces the halls of Room 2, shown here with the Jennings Hotel Tote by Wood & Faulk. 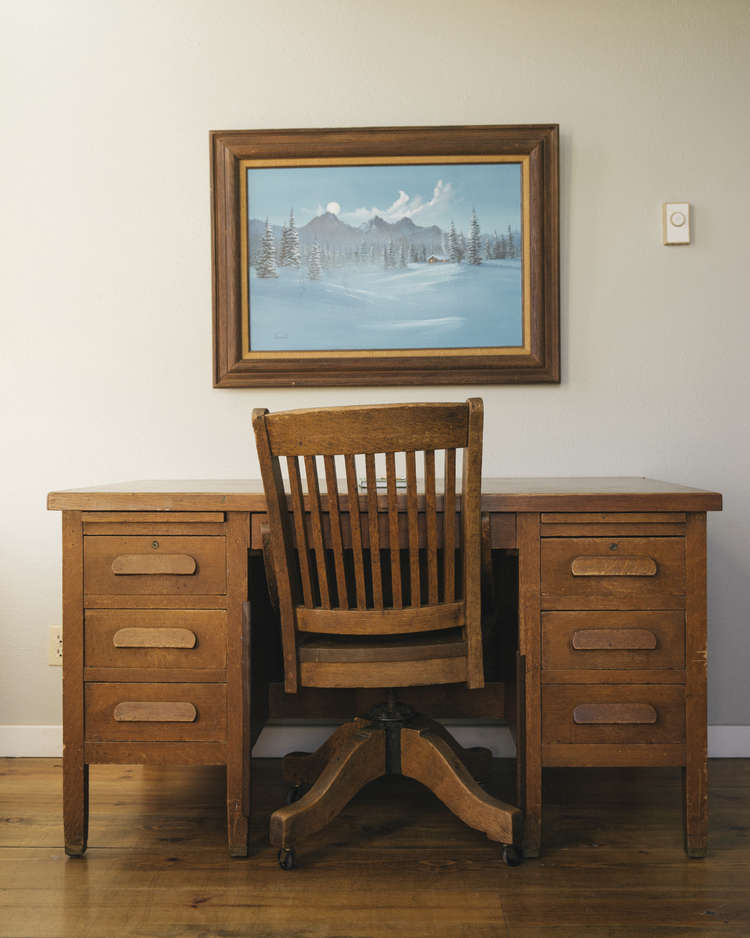 Above: Room 6 has its own private kitchen and is stocked with books, a vintage desk, and a plush leather lounger. 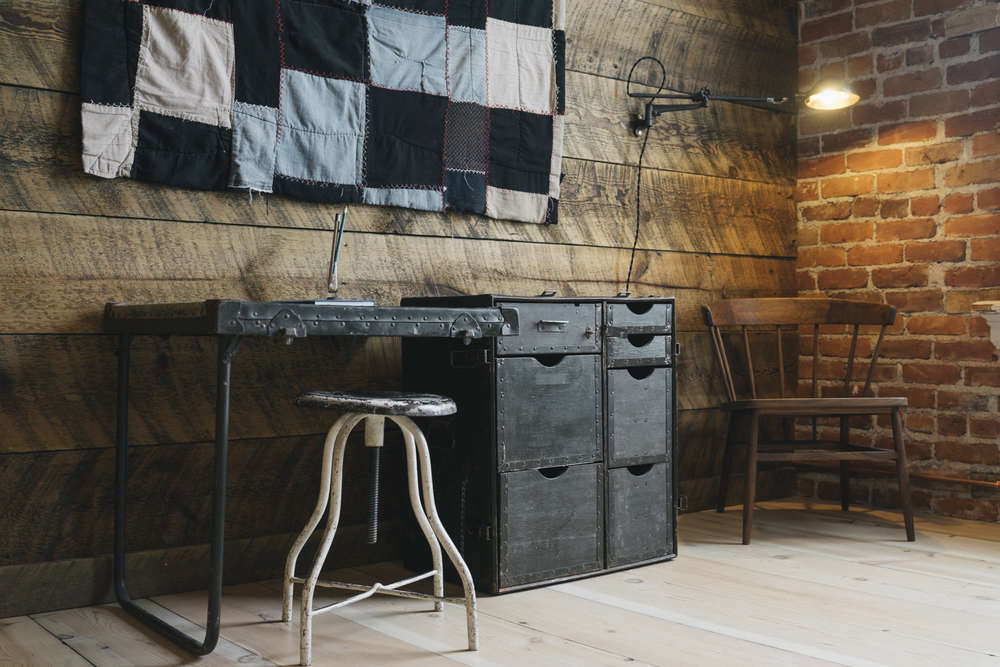 Above: Room 8 was designed by Hennes himself, as “a love letter to cabin life.” Whitewashed floors contrast with rough-sawn wood-paneled walls. An O.C. White Wall Lamp from Rejuvenation lights the vintage desk. 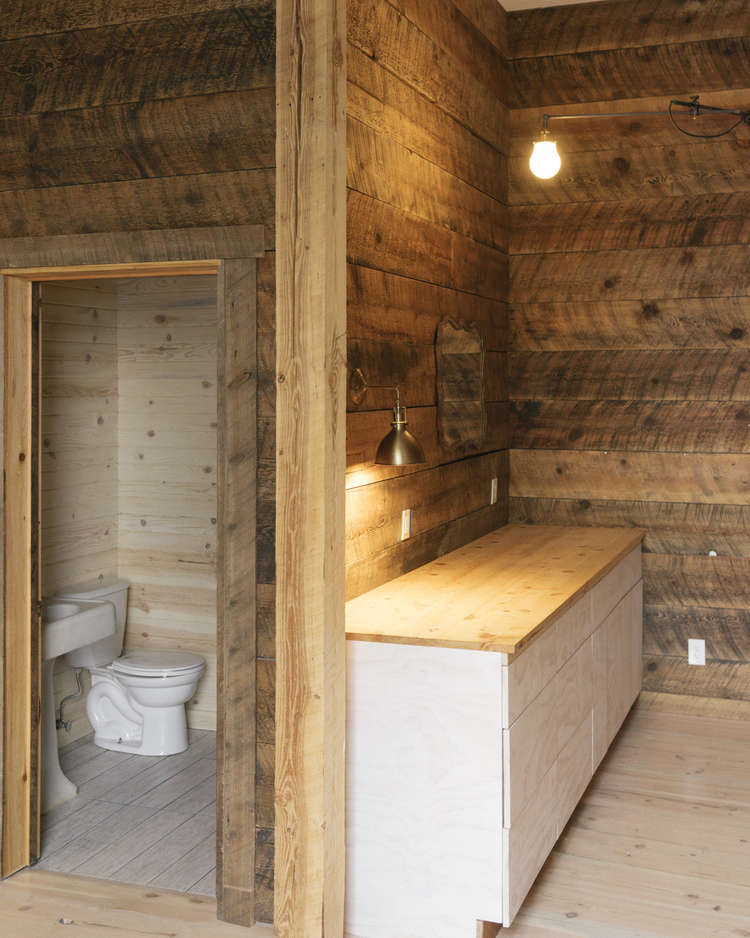 Above: Room 8 has a private bathroom and built-in storage cabinets. 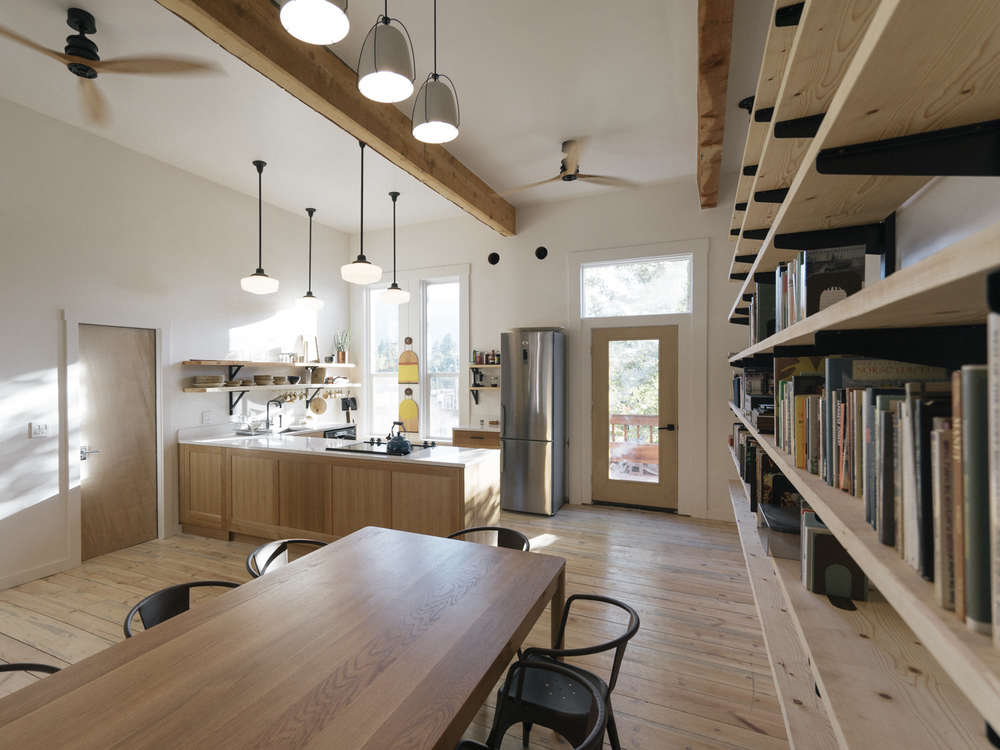 Above: In the communal kitchen and library, guests have access to books, records, and a balcony. 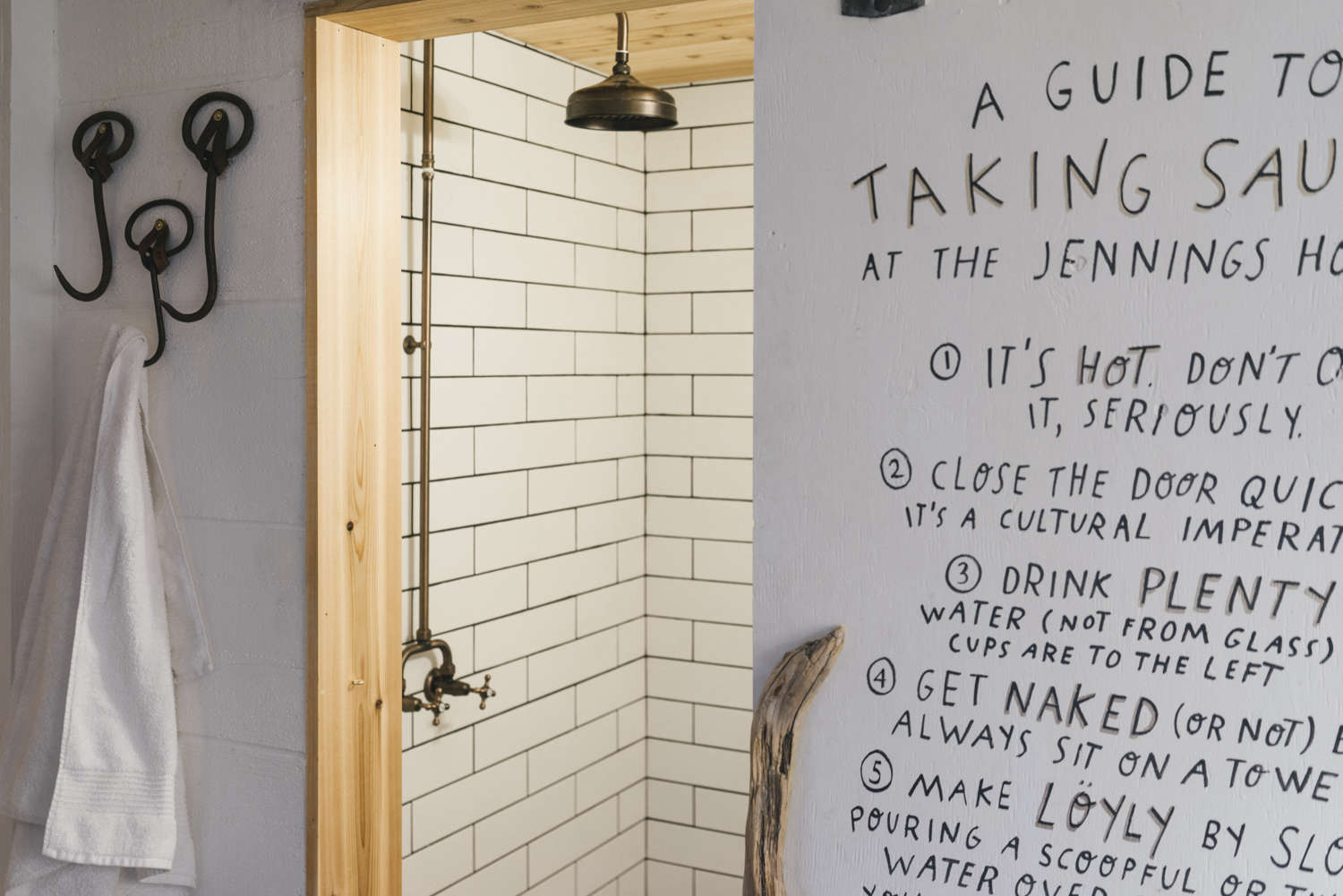 Above: Hotel guests have 24-hour access to the sauna and the subway-tiled shower that serves as the sauna’s “cold plunge.” Artist in residence Mary Rothlisberger created the sauna guide. 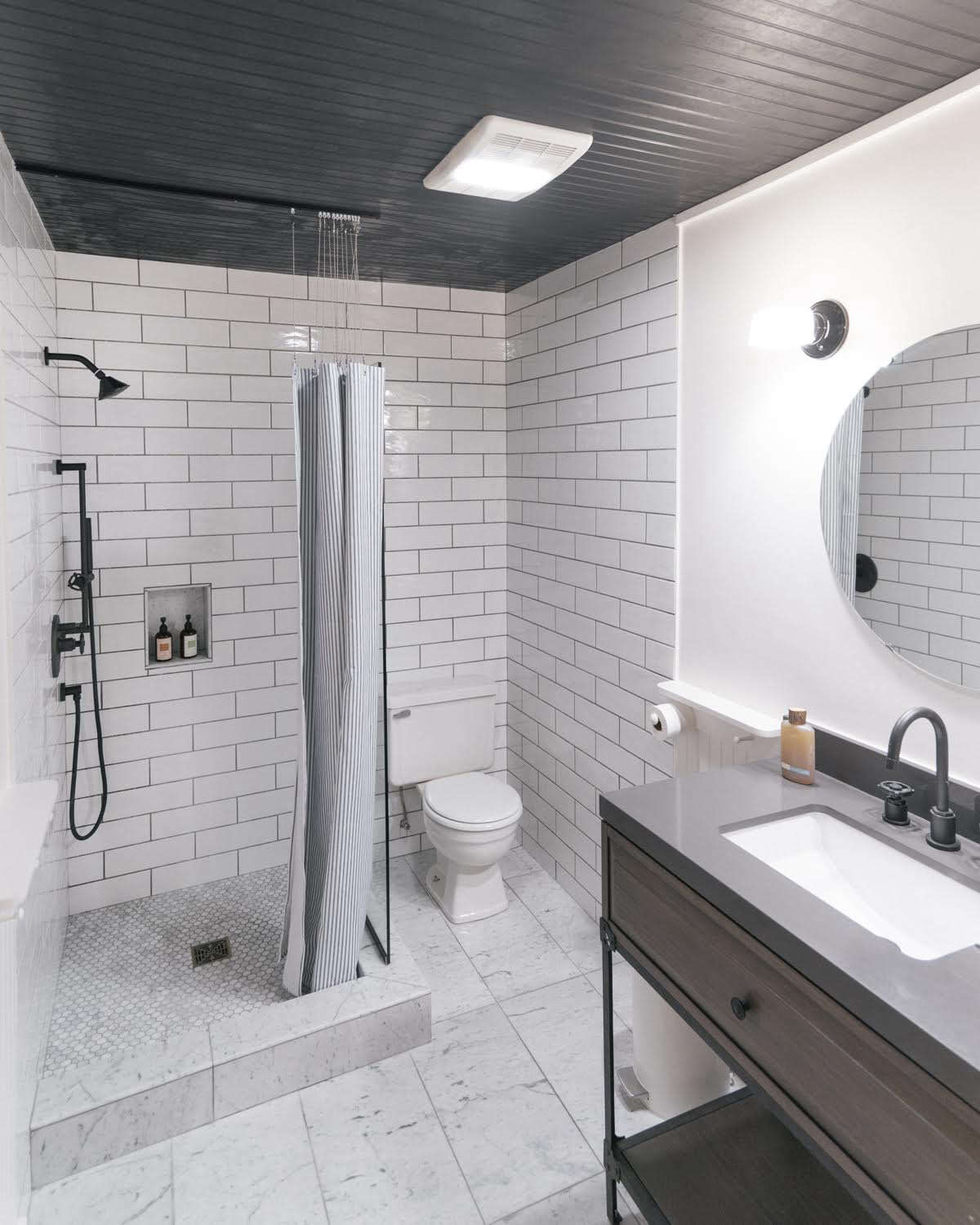 Above: One of several shared bathrooms—this one for use by rooms 3A and 3B—is stocked with all-natural hair products by Joseph-based Beecrowbee and soap from Juniper Ridge. 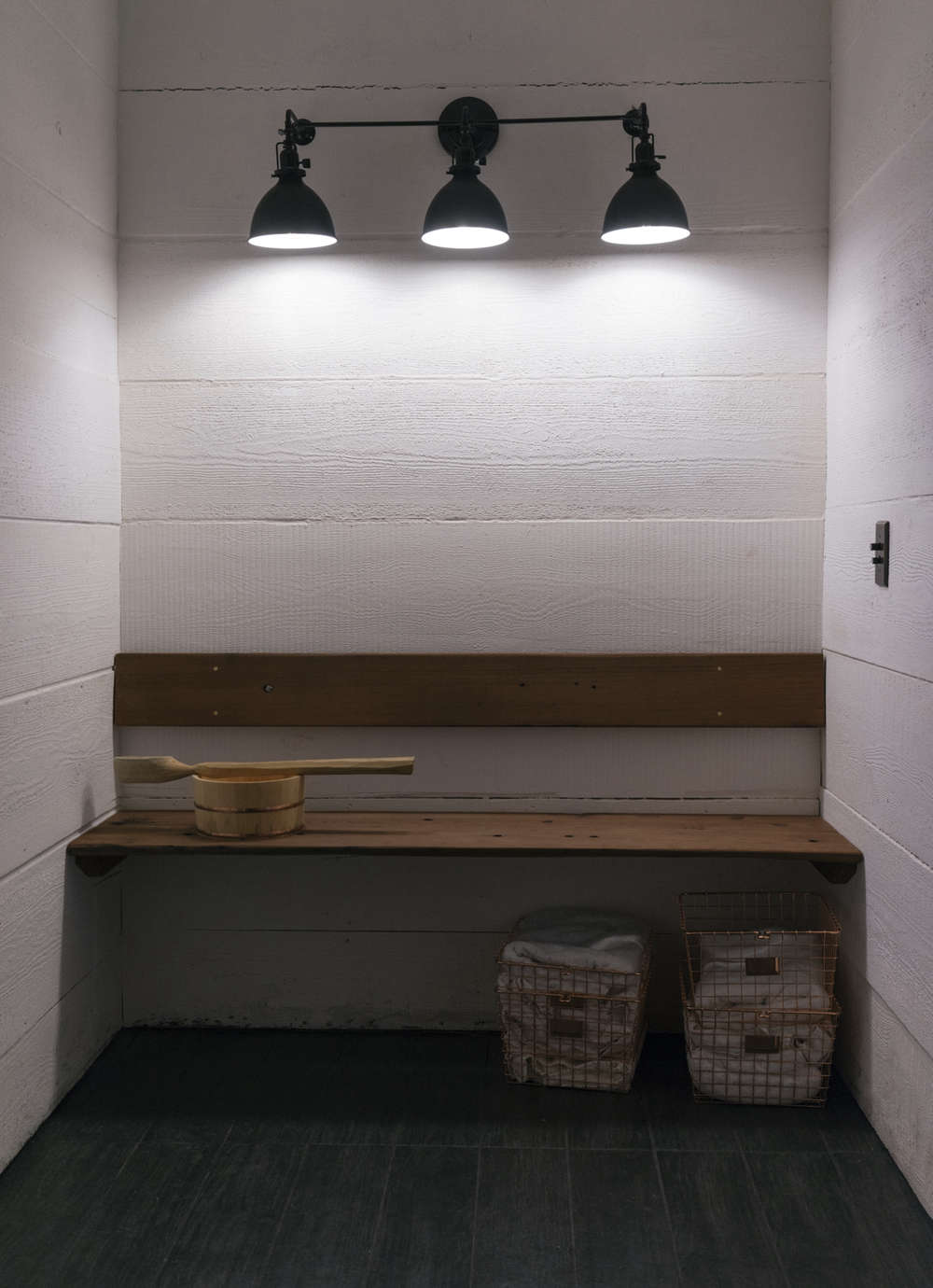 Above: The sitting room outside the sauna has a custom redwood bench by Tom Bonamici.

The Jennings Hotel is located at 100 N. Main St. in Joseph, Oregon. Rooms start at $79 per night for a private room with shared bath.

For more on the designers and makers featured at the Jennings, see Phloem Studio: Homegrown Furniture from Portland, Oregon, High-Style Hillbilly: Tyler Hays for M. Crow & Co., and Earn Your Wilderness Stripes at the Minam River Lodge.

The New Sanctuary: Inside a Curator’s Haven on the Coast of Maine, Ikea Kitchen Included