Brooklyn urban entrepreneur and real estate developer Jonathan Butler got his start writing the real estate blog Brownstoner before cofounding the Brooklyn Flea and Smorgasburg. His latest venture with partner Eric Demby is Berg’n, a cavernous beer hall in Brooklyn that opened its doors in August. Along with its adjacent commercial building, 1000 Dean, Butler has turned the two existing buildings, a former garage and a Studebaker service station, into a hub for the creative communities in the nearby neighborhoods of Crown Heights, Fort Greene, Prospect Heights, Bedford-Stuyvesant, and Clinton Hill. “The 9,000-square-foot beer hall was conceived of as a central gathering place for the building’s workers and for the community,” Butler says. “While we’re pleased that there has been plenty of beer being purchased, the beer hall was designed to serve multiple purposes across different parts of the day.”

Working with the NYC-based German architect Annabelle Selldorf and her team at Selldorf Architects, Butler and Demby aimed to create a “modern yet timeless take on the beer hall concept. We were conscious of not creating a German theme park, just as we were very careful to avoid some of the design motifs that were in the process of becoming Brooklyn clichés,” he says. Selldorf’s design approach of prioritizing “clarity, function, and restraint” worked well with the constraints of the budget. “The focus on what is ‘essential’ strengthens all projects but especially those with a limited budget,” Selldorf says. “The existing building was a great remnant of the neighborhood’s industrial legacy. We worked to restore what was there while introducing a mix of vintage and modern finishes, fixtures, and furnishings to create a contemporary design that evokes the building’s industrial past.” 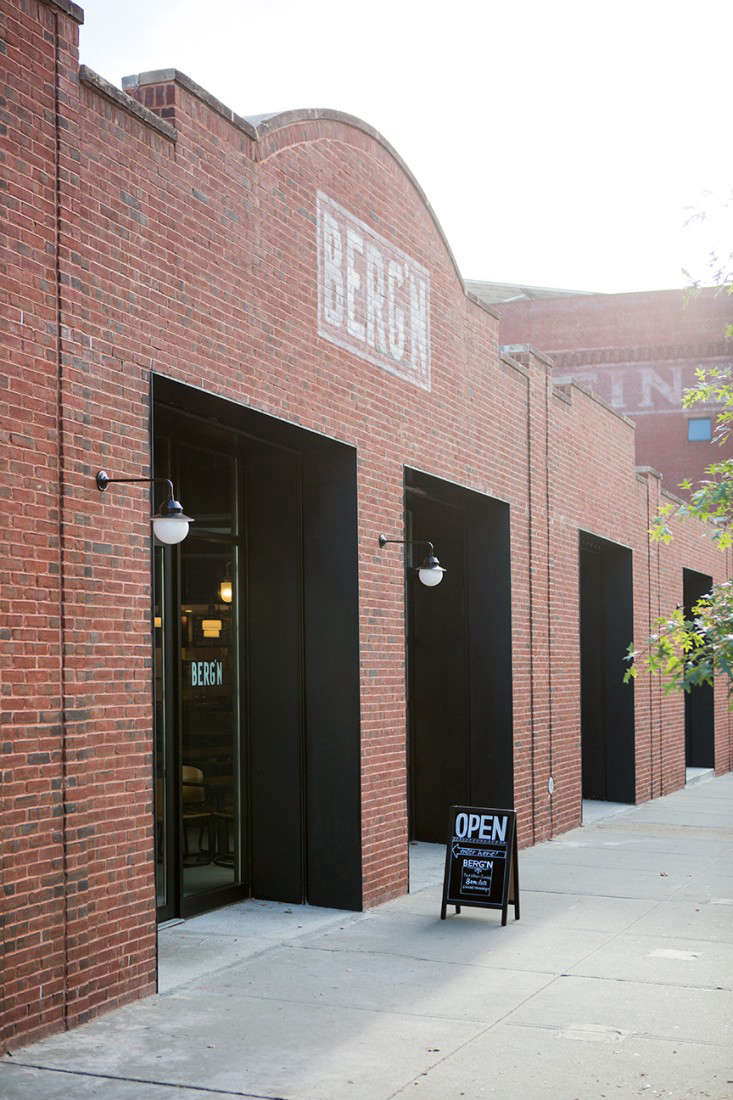 Above: The structurally damaged facade was completely rebuilt with wood-molded bricks. Selldorf Architects were responsible for the overall design of the project, including floor plans and all specifications, and Brooklyn-based Bostudio was the architect of record. 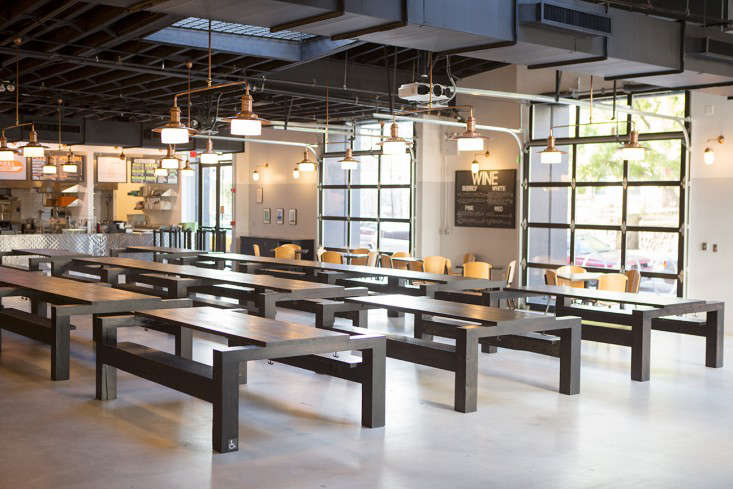 Above: The expansive space of the main beer hall retains echos of its former life as a garage. The existing garage doors were replaced with operable storefront doors made from black-painted aluminum and glass. When the doors are open in the warmer months, the space feels like a classic outdoor beer garden. 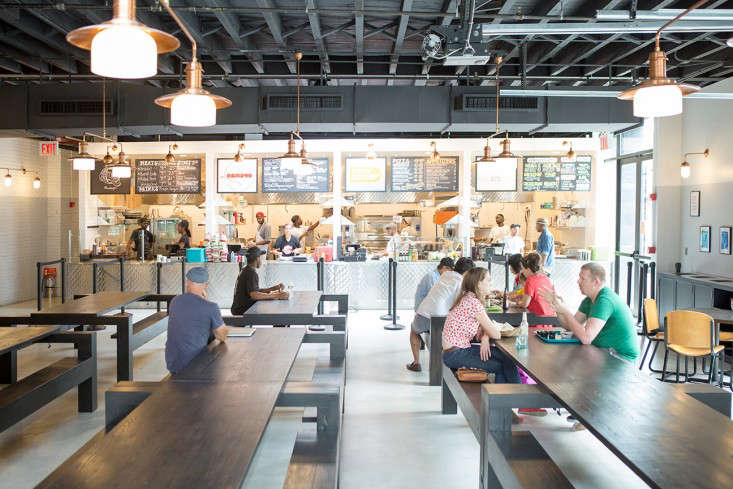 Above: The architects retained what they could of the original interiors by clarifying and painting the wood-beam ceiling and repairing and repainting the concrete floors. In the interiors, they used a controlled palette of wood, steel, and copper. Food vendor stalls (including Asia Dog, Mighty Quinn’s BBQ, Pizza Moto, and Ramen Burger) are clad in quilted stainless steel. 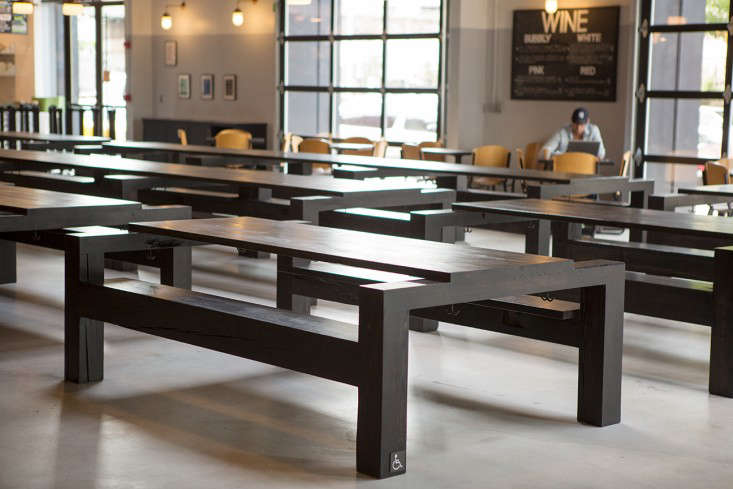 Above: The 15 sculptural, utilitarian beer hall tables, designed by Selldorf and produced by Greenpoint-based workshop TriLox, are made from heart pine reclaimed from a New Jersey wallpaper factory and were inspired by the work of Donald Judd. 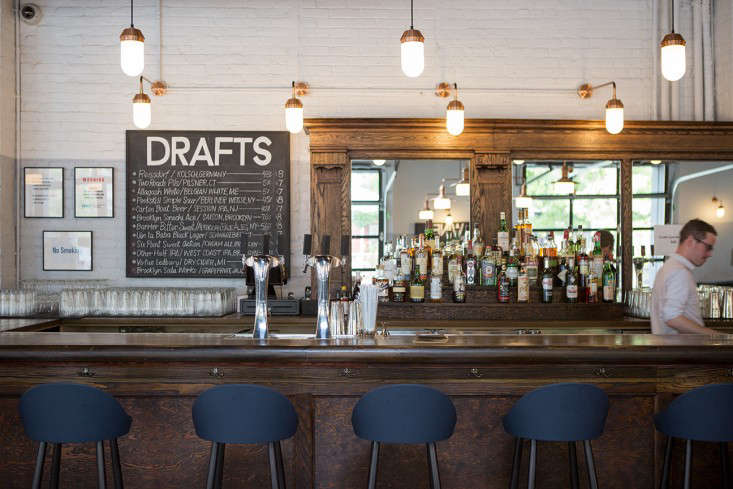 Above: Butler found the 40-foot-long, 1920s vintage bar at Olde Good Things, a longtime vendor at the Brooklyn Flea. The Bermerhaven Zylinder Copper Pendants above the bar are from German company Bolichwerke and the Bodega I Bar Seating is by Niels Vodder, distributed by Matz Form. “I bought the bar based on the photos alone,” Butler says. “It took a fair amount of work to retrofit it for modern-size fixtures, but its original elements, particularly the back bar, remain intact. 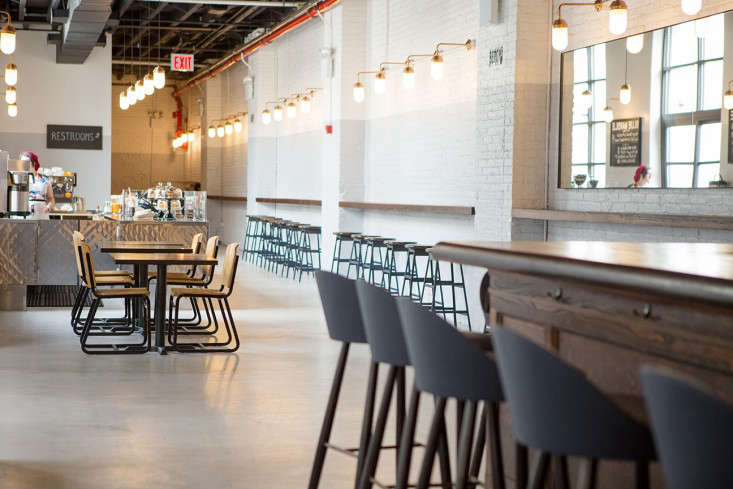 Above: Looking toward the cafe and restrooms, a long run of counter seating takes advantage of the length of wall. Bremerhaven Zylinder Wand Wall-Mounted Copper Lighting Fixtures by German company Bolichwerke add warmth to the painted brick walls. 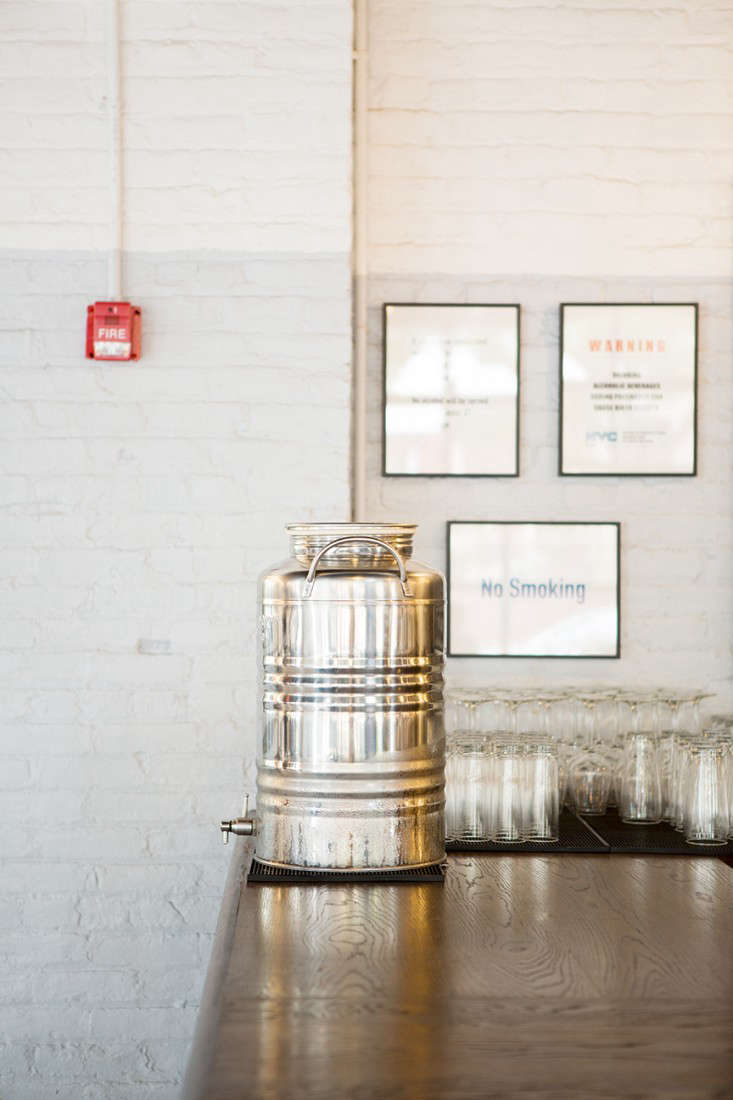 Above: A Superfustinox Dispenser from Italy serves water. 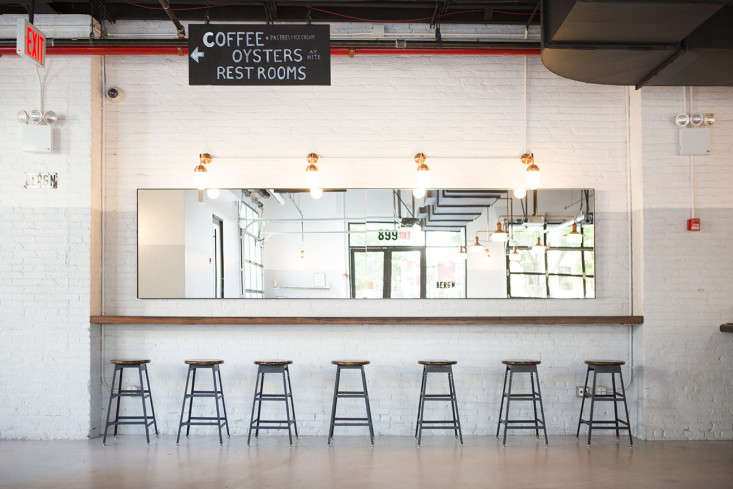 Above: A mirror is used to reflect light and to add the illusion of depth for those sitting at the counter. Simple wood and metal Industrial Stools by Pollard Steel Factory Equipment complement the architecture. 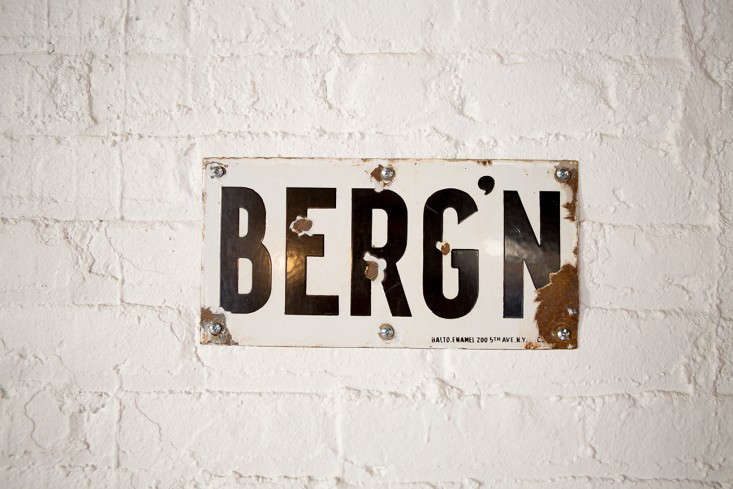 Above: The name for the beer hall came from old Bergen Street subway station signs that Butler found on eBay. In order to fit on the narrow station columns, the name on the signs was shortened to “Berg’n.” 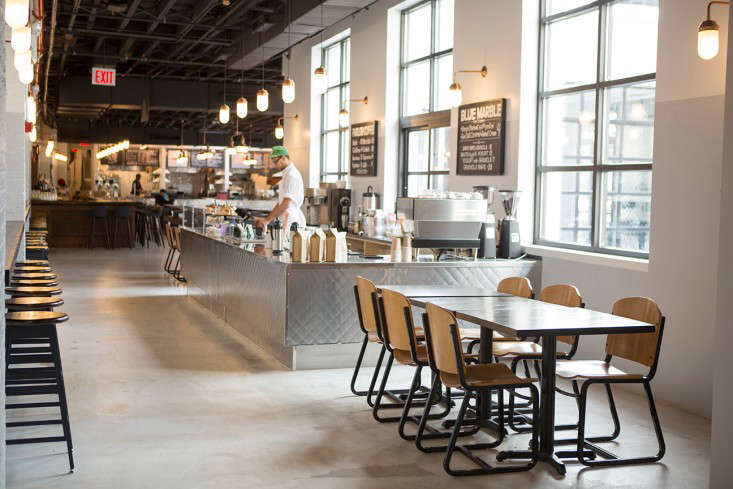 Above: The cafe is off to the side of the main beer hall. 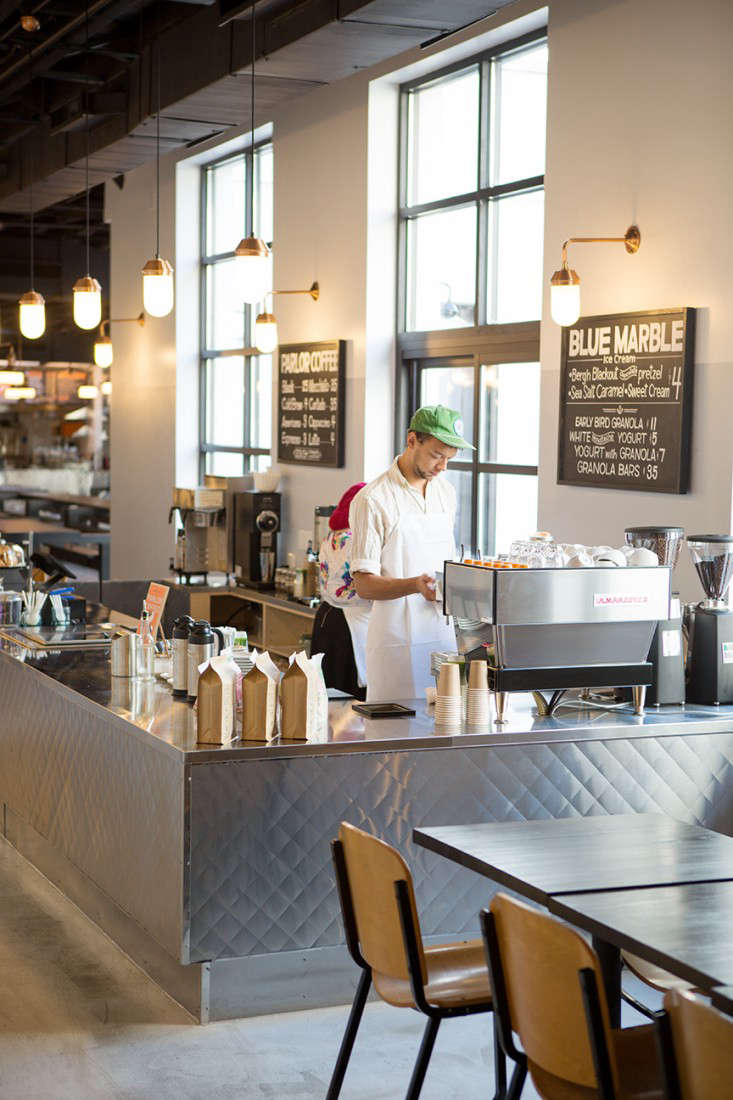 Above: The use of quilted stainless steel seen in the design of the vendor booths is repeated at the cafe. 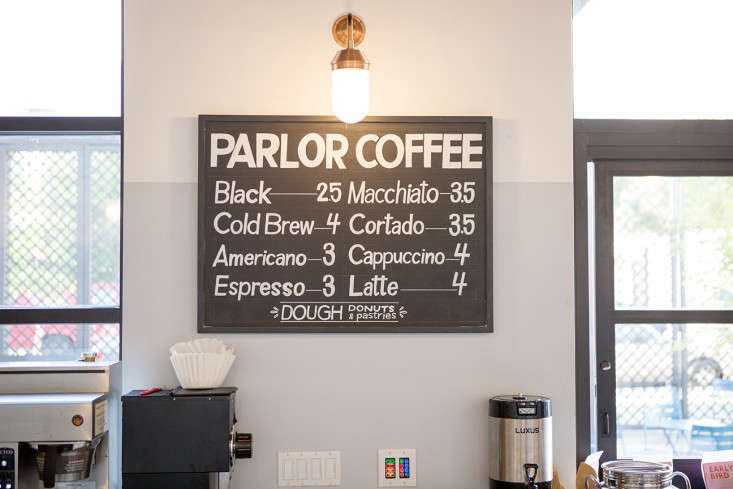 Above: Parlor Coffee is an emerging coffee roasting company in Brooklyn. “The owner just finished building a beautiful roastery down by the Brookyn Navy Yard,” Butler says. “He imported an old roaster from Europe. It looks amazing and the coffee is amazing.” 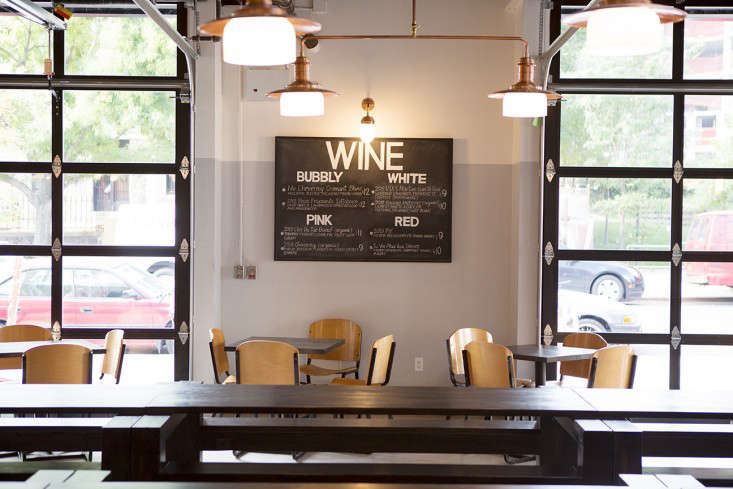 Above: Wine drinkers are welcome as well. 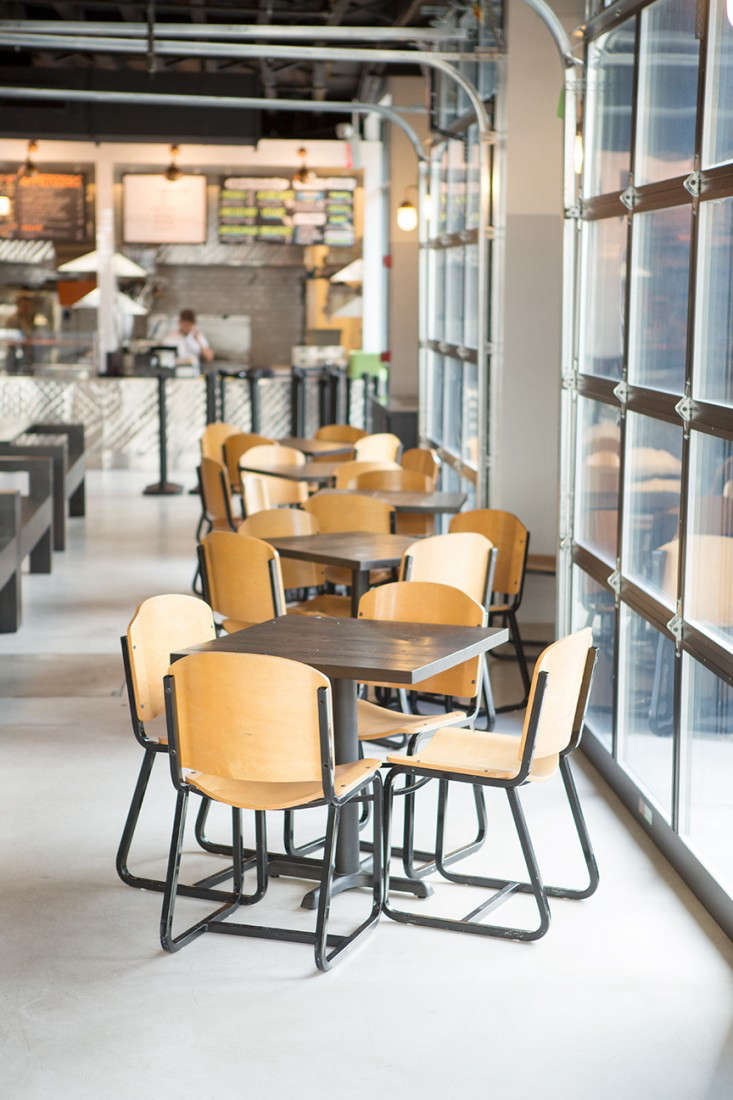 Above: Vintage Thonet chairs that Butler sourced on eBay are gathered around small tables to create more intimate seating. 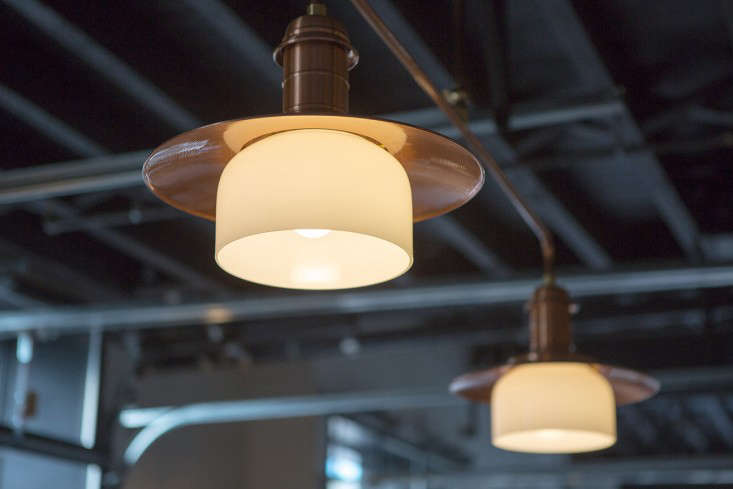 Above: The copper pendants from the Ebolicht Collection by German company Bolichwerke hang from the industrial ceiling. 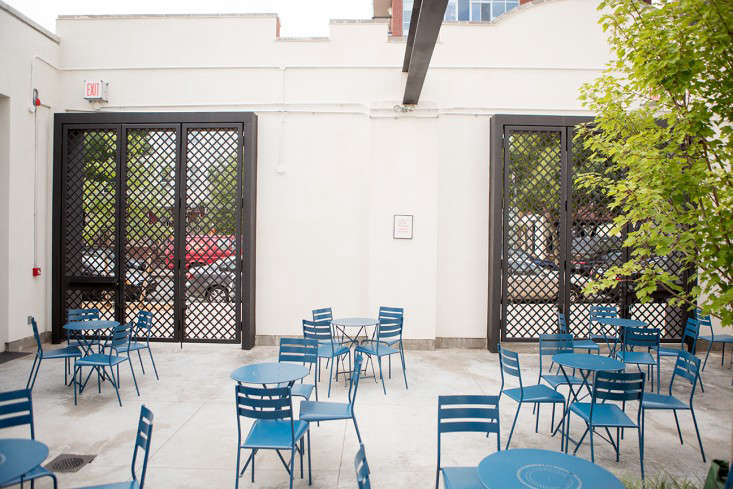 Above: A portion of the existing roof from the garage building was removed to create an enclosed outdoor courtyard with teal French cafe seating. 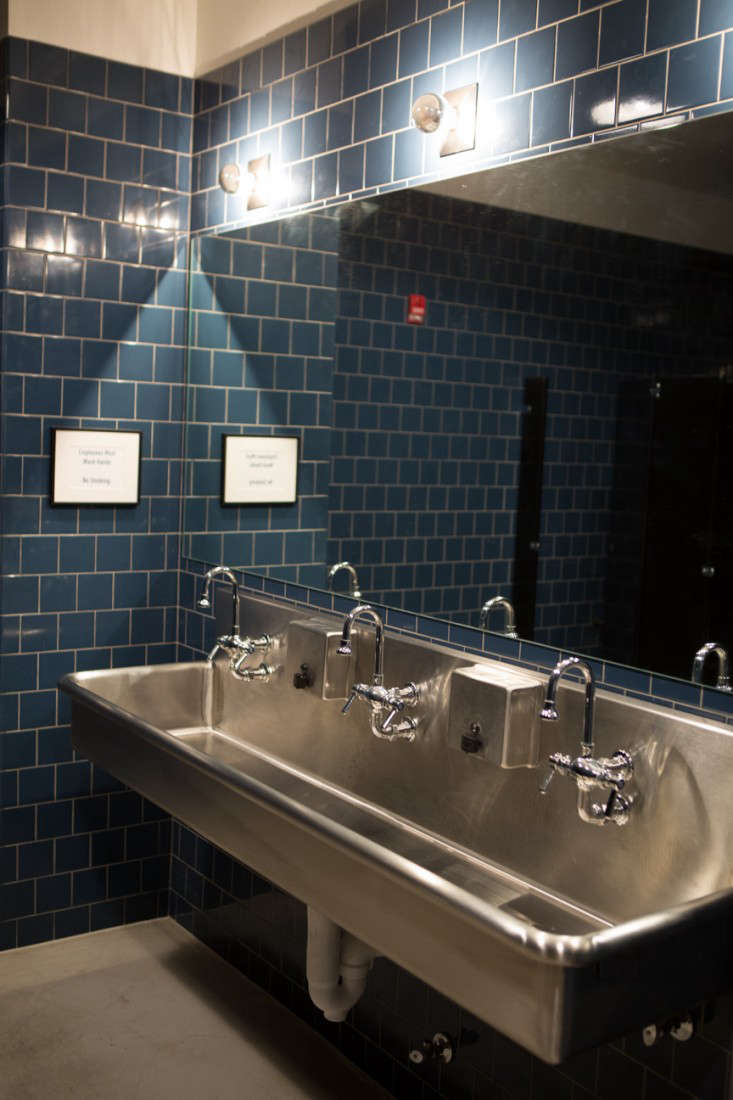 Above: Selldorf extends the teal palette into the bathrooms as well. 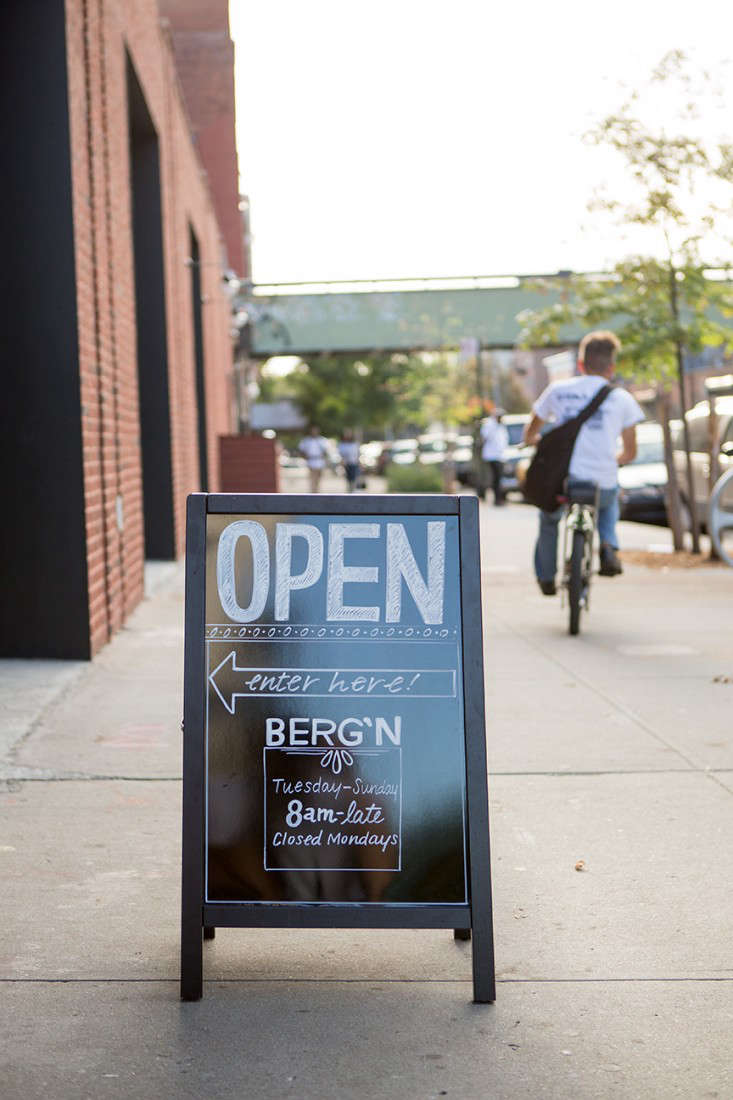 Above: The all-day hours accommodate the creative community of the neighborhood and 1000 Dean, the adjacent commercial office and artists’ studio building.

See more of Selldorf’s imprint on Brooklyn in Rehab Diary: A Hardworking Kitchen by Annabelle Selldorf. And if you’re planning a visit to Brooklyn, be sure to visit our favorite Design Haunts in the area in our City Guides.

And on Gardenista, we visit Before and After: A Brooklyn Townhouse with a Double-Wide Garden.

Berg’n is located in the Crown Heights neighborhood of Brooklyn.

Muuto-Style Cabinet Pulls on a Budget

Trending on Gardenista: Style on a Budget