Several months ago, when I posted about Bea Johnson and her Zero Waste Home (in which she and her family of four essentially live waste free), there was a stream of comments from readers both embracing and questioning the idea. The concept of zero-waste living struck a nerve. It also resonated heavily with me and I kept coming back to the idea–which is why last month at the dinner table I suggested to my husband and two kids that we try living zero-waste-free for a week–that’s right, create no trash for seven days. My almost-teen daughter, Imogen, and teenager son, Conrad, gave me one of their are-we-really-going-to-do-this looks. Fortunately, my husband, David, who happens not to be a big consumer (with the exception of outdoor gear), proved game, and once we all started talking about it, everyone got on board.

Armed with good intentions and tips from Bea’s site Zero Waste Home (printed out on paper, ironically), we wondered, how hard could it be? Well, let’s just say the project was an epic fail. But we did manage one very low (if not zero) waste day, and we learned some lasting lessons along the way. Here’s what happened on that memorable day: 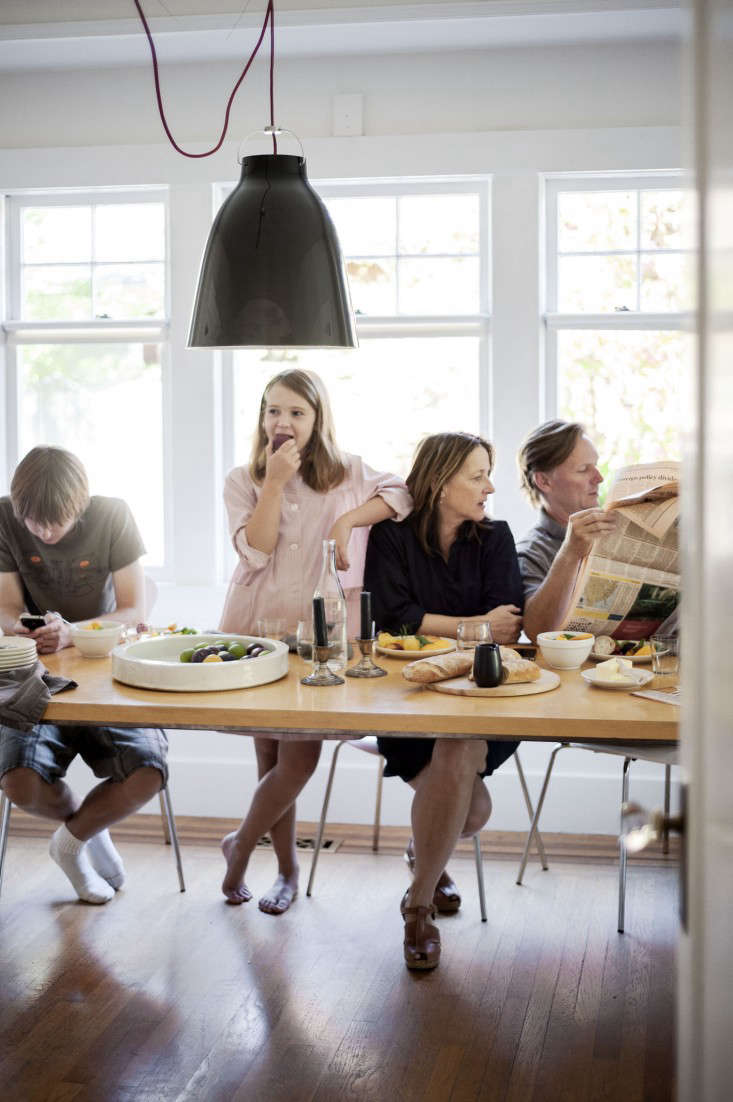 Above: At home around the dining table with David and our two children. Photograph by Mathew Williams for Remodelista.

Breakfast: homemade granola. Having finally managed to banish large cereal boxes from the house after a ten-year campaign, I thought I had earned a few brownie points with the granola. But then I realized that all the contents with the exception of the oats had come from packaged nuts, fruit, and honey. David has hot cereal (bought in bulk in a reusable bag) with milk. The latter came in a refundable bottle, so we’re feeling good about that. Imogen has yogurt from a large plastic container (sending us back three spaces on the Zero Waste Home gameboard). Solution? Switch to Saint Benoí®t yogurt in recyclable pots (made locally, but more expensive).

We all have water–four glasses filled to the brim and not all finished when cleared away. We realize that we’re pouring away perfectly good water daily. Solution? Each of us picks a different cup/glass/bottle that we’ve started keeping on the kitchen counter and now use throughout the day, vastly reducing the dishwasher load. The newspaper is delivered in a plastic wrap with an elastic band even though it’s not raining. Time to go electronic. 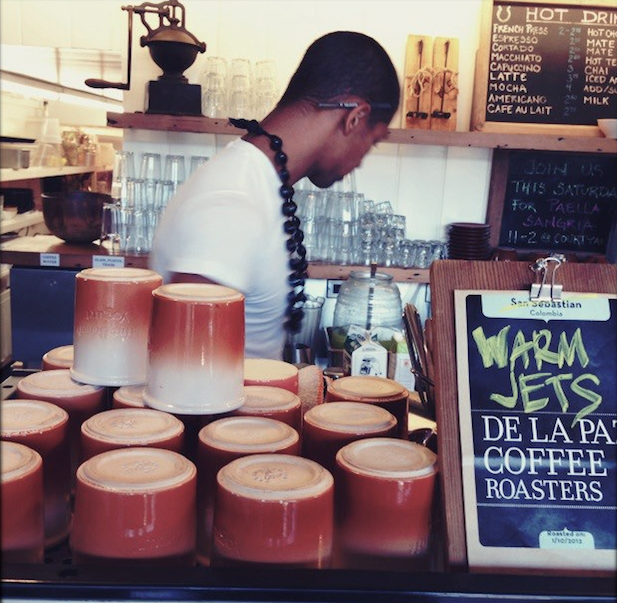 Above: Ceramic yogurt pots from Sonoma Creamery Saint Benoí®t repurposed as coffee cups at the Stable Cafe in San Francisco.

Showers: I have the kids time themselves and discover they spend way too long preening in the mornings. Having grown up in the UK, I am trying to persuade them that maybe they don’t need to wash their hair daily (it’s better for the hair). And while we’re waiting for the shower to heat up, Bea suggests collecting water in a bucket and using it for watering the plants. That one remains on the To Do list. Bea, our role model, is also big on bulk shampoos and conditioners like Dr. Bronners Castlle Soap and suggests making your own toothpaste. A recent clampdown on water usage in our town has all of us aware that running water is a waste, so we’re mindful on the toothbrushing front.

Above: I like this recipe from naturalist Shiva Rose for toothpaste. The Local Rose is Shiva’s blog devoted to healthy, holistic living with lots of good tips.

Caffeine: I pick up a late morning coffee at my local coffee shop and use my ten-ounce We Are Happy to Serve You ceramic cup (see below). I’ve been doing this for years, always with my own cup, and have managed to master the art of riding a bike and holding coffee in one hand, while only occasionally spilling (proof that plastic lids are highly overrated). I no longer like the taste of coffee in paper cups (that are invariably lined with plastic), and I’m always amazed by how many people can be found sitting in a coffee shop with to-go cups with lids and cup wraps. I’m also a fan of the Kleen Kanteen, which can be used for both hot and cold liquids. For my brew at home, I like Blue Bottle and other companies that use compostable bags instead of ones lined with plastic. 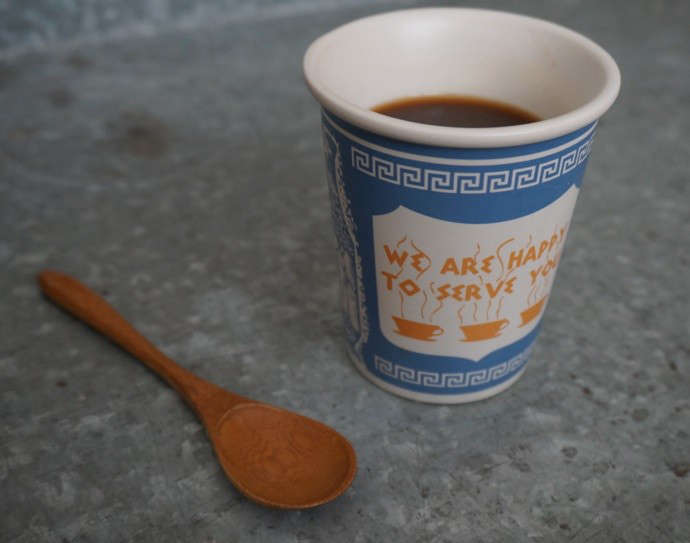 Above: My ceramic Greek Coffee Cup: $12 from Uncommon Goods.

Lunch: Imogen packs her lunch (mostly leftovers) in metal containers. Water is in a metal bottle from Sigg, but I note that this one was a freebie and is probably lined with plastic (still, at some point you have to let go). Conrad buys his lunch off campus. He says it’s impossible not to get some sort of wrapping with to-go food, whether it’s a burrito or a slice of pizza. It turns out that he drinks water out of plastic cups at school. He says he’s willing to switch to a metal bottle. 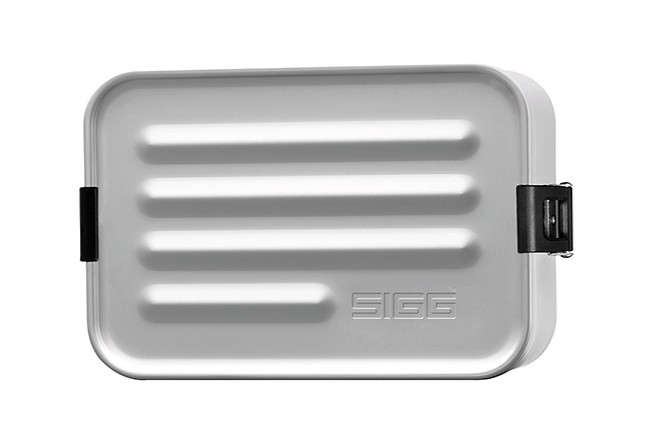 Above: Our favorite lunch tote is the Aluminum Box Mini from Sigg; $31.99.

I have a lunch meeting and order a ginormous kale salad; I end up taking half if it to go, generating a box. One of the Zero Waste Home tenets: bring your own container for leftovers. Why didn’t I think of that? (Moving backward on the board again). David picks up a sandwich for lunch served in-store on a paper plate with excessive paper napkins. He puts back most of the napkins. He returns home to find the mail, most of it junk. Even though I get us removed from mailing lists, catalogs keep reappearing. Time to sign up for the National Do Not Mail List.

Errands: In the afternoon, I pick up our bimonthly CSA veggie cardboard box and realize that all of the produce comes in a large plastic bag with a layer of paper on top. I head to the bakery for a loaf of bread and forgo the paper bag, but have to drop it in my cloth bag that has a pen and a couple of coins floating around the bottom (not exactly ideal). Solution: bring the furoshiki I usually keep the bread in on the kitchen counter. (I get mine from Ambatalia.) 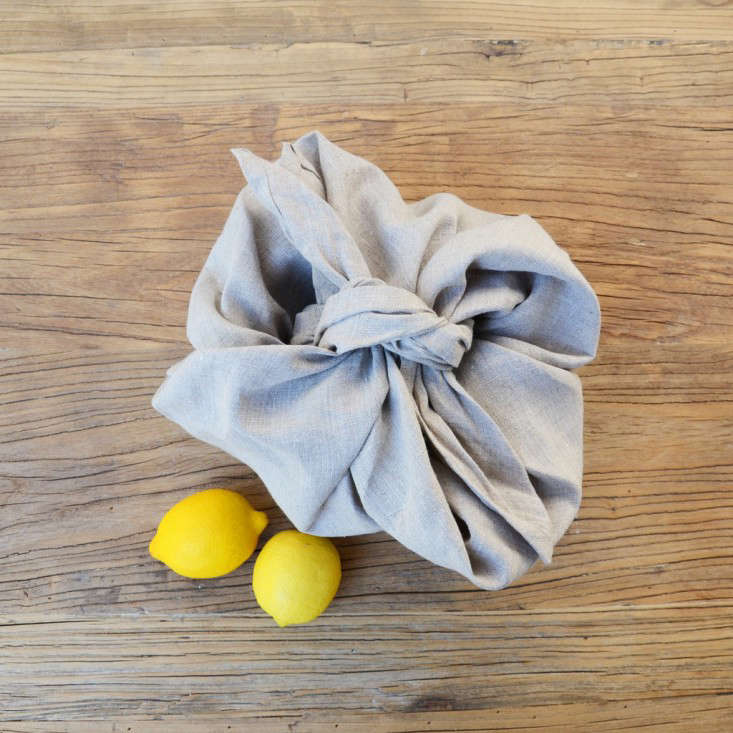 Above: A linen furoshiki, a giant dish towel of cotton hemp, made by Ambatalia and ideal for storing bread. Available from the Green Tree General Store for $34.

I drive to Whole Foods equipped: I have my baggies for grains, net bags for produce, and cloth bags for the lot. I even reuse the paper tie tags that you have to write the product number on for bulk purchases (I do this really because I can’t be bothered to write out the numbers on each visit). I buy fennel and head for the cauliflower, but note they it’s wrapped in plastic– abandon the latter. The bananas and apples come with stickers–oh well. I need to buy pasta. It only comes in packages at this locale (is plastic worse than paper boxes?). Need to find a bulk source. So much to think about. 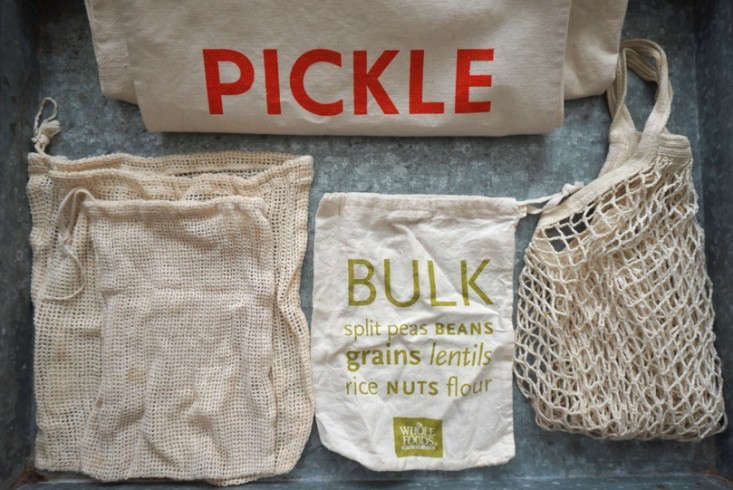 Above: A variety of the bags I arm myself with for a trip to the store. Eco-bags sells bags in all sizes for every shopping need.

Feta cheese is next on the list; it comes wrapped in clear plastic. I never use cling wrap at home, but here I am buying cheese wrapped in it. Can’t possibly be good for the cheese. Opt for feta in a plastic container (not sure if this is better or worse). I need some meat and have remembered to bring a glass jar as per Bea’s recommendation. I note that the meat is still placed on a piece of plastic on the scale before it’s popped into my jar and a label is slapped on. The butcher doesn’t bat an eye–It turns out there’s another customer who brings in several jars for her weekly meat supplies. The lady beside me says it’s a great idea and she might give it a try.

Last on the list are tomatoes. I had finally moved on from buying tomatoes in cans to tomatoes in jars (because of the BPA from the plastic liners in cans; see Treehugger on the topic). Do I buy off-season tomatoes from the produce section and make my own sauce or just grab a bottle? For my sanity’s sake, I grab a bottle that will get tossed into recycling. I’m amazed, and exhausted, by the endless decisions that need to be made. I’m given a receipt at checkout, another bit of waste (and now that many receipts are found to have BPA on them, another thing to avoid). Solution: ask for receipt to be emailed whenever possible. 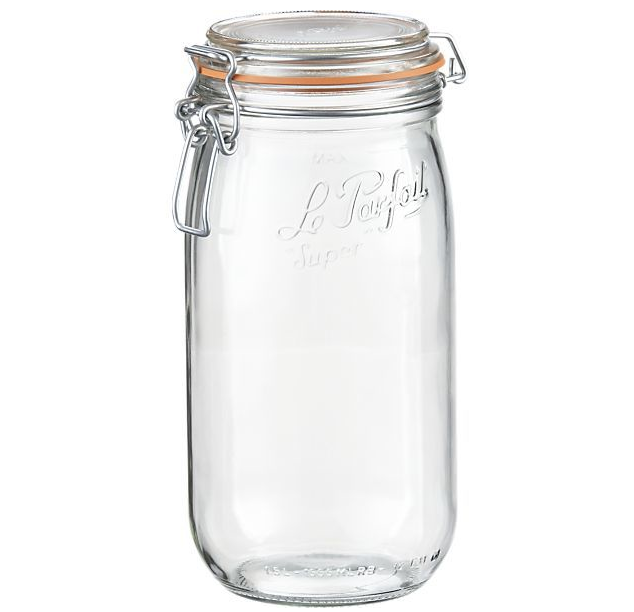 Above: Bea favors Le Parfait jars for buying meat (and ice cream). The jars are available from Crate and Barrel for $9.95.

Dinner: I make a fennel sausage sugo. Bea suggests foregoing serving platters and placing food straight onto dinner plates to save the water required for extra cleaning. Scraps are composted. She also advocates skipping garbage liners altogether. Leftovers are put into the fridge with the cotton Bowl Over covers that I got awhile back. Heidi Swanson sells some nicer linen versions (see below).

Bedtime: I start removing my makeup with cotton pads and realize I’m generating waste yet again. Bea suggests Reusable Cotton Make Rounds (which she happens to sell); I could be persuaded. 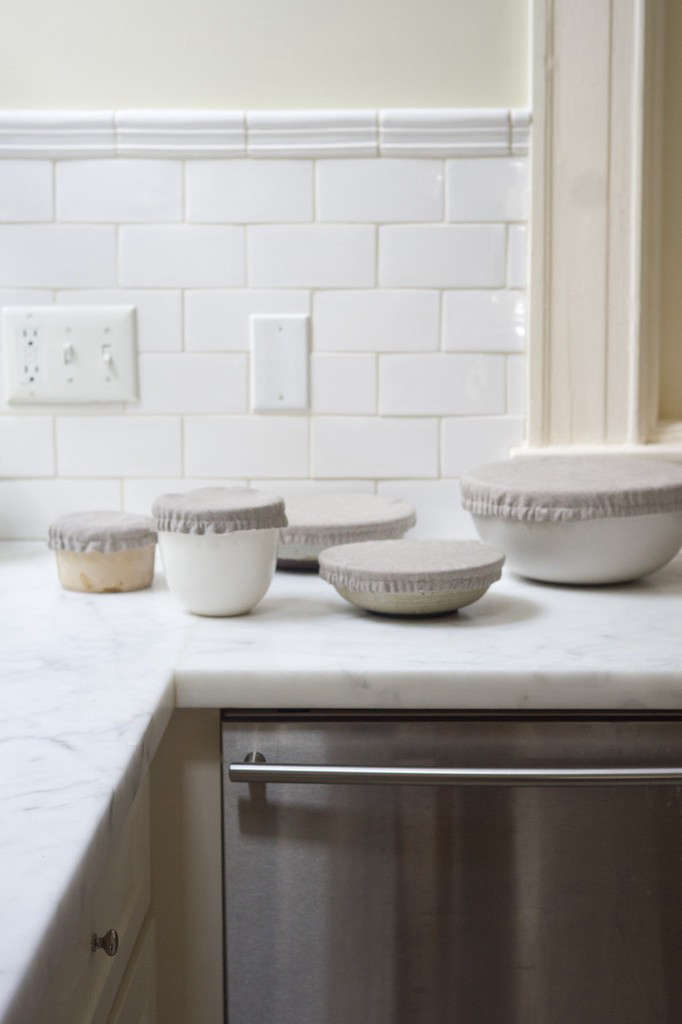 Above: Linen Dish Covers made by Ambatalia are available at Quitokeeto; $58 for a set of five.

Recap: At the end of our first (and only) day, our heads are spinning, but we alI have gotten the point. I had naively thought that by making my own cleaning solution, repurposing rags for cleaning, and drying laundry on a line that we were ahead of the game. I could not have been more wrong. Yes, all those steps help, but to purposefully consider every bit of waste you generate on a daily basis is a true exercise in conscious consumerism. The takeaway? Zero waste is a daunting goal, but refusing more packaging, using less water, and consuming carefully is doable and worthwhile. And all four of us will certainly be more mindful. If you want to try the zero waste challenge yourself, Bea’s tips are hugely helpful. And if you decide to go hardcore, you can hire her for a full lifestyle consultation.

We would love to hear your suggestions for consuming less (fill us in below).

See our original interview with Bea Johnson: 10 Ways to Live with Less from Zero Waste Home. For other ideas on living with a small imprint, check out Small Space Living posts, including Erin Boyle’s Survival Guide to Life in a Tiny Brooklyn Apartment. And Bea, naturally, is an avid gardener. On Gardenista, see her 10 tips for a Simplified Garden, to Grow More with Less.

Before and After: A Cobble Hill Kitchen Makeover

10 Compelling Reasons to Bring the Outdoors In

Remodeling 101: How to Achieve Total Darkness in the Bedroom (and Why It Matters)