A Remodelista exclusive: Looking for adventure, some friends of ours recently sold their house in London, moved with three young daughters to Northern California, and stumbled upon Mr. Blanding's dream house. Or what was left of it.

The first time they saw the Mediterranean-style stucco house that a San Francisco attorney named Gordon Blanding hired architect Julia Morgan to design near the peak of Belvedere Island nearly a century ago, the grandest thing about it was the view. The house looked as if someone's grandmother had been living there for many decades. Our friends promptly embarked on an 18-month renovation that managed to preserve historic detail while creating a modern family home, where both the children and the couple's extensive art collection can co-exist peacefully. 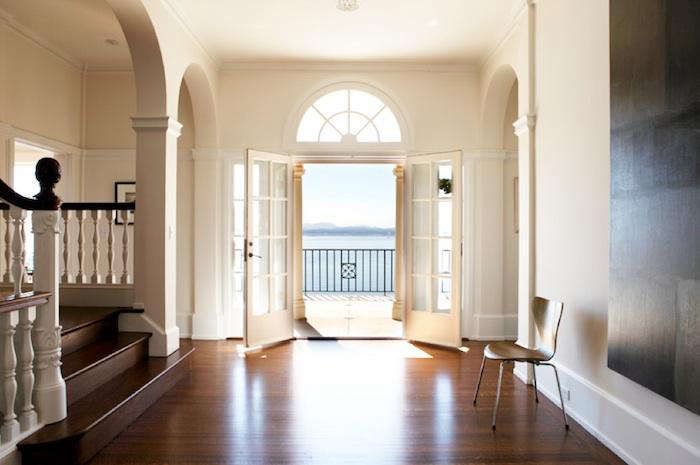 Above: In the second-floor hallway hangs abstract painter Sean Scully's Moorland, purchased after a trip to the artist's studio in Germany. Scully is very particular about choosing the homes to which his paintings go. "I took off my shoes going in to his studio," our friend said, "and he liked that." 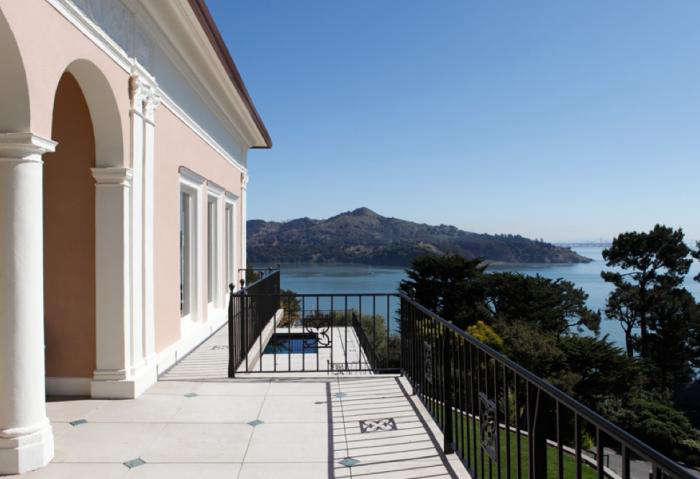 Above: Built in 1913, the Blanding Casino ("little house" in Portuguese) was one of seven buildings on the estate. Designed to be guest quarters, the original main entrance was on the back of the house, on the second floor. A wide-angle view from the terrace also includes Angel Island and a slice of the Bay Bridge. 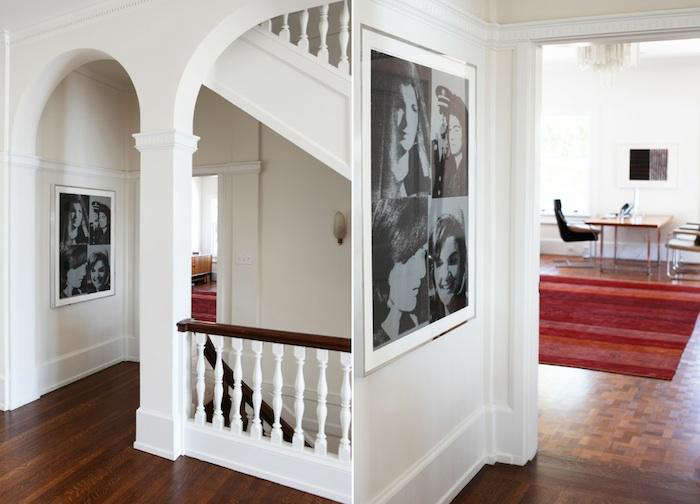 Above: Across the hallway is Andy Warhol's Jacqueline Kennedy III (Jackie III). In the office is another Scully work, Study for Clash. Glimpsed through the doorway: a chandelier from eBay ("It has 120 crystals, which I know because I had to stand on a ladder and hang them myself," our friend said) and chairs obtained after buying an office block in Dusseldorf; a previous tenant left the furniture. 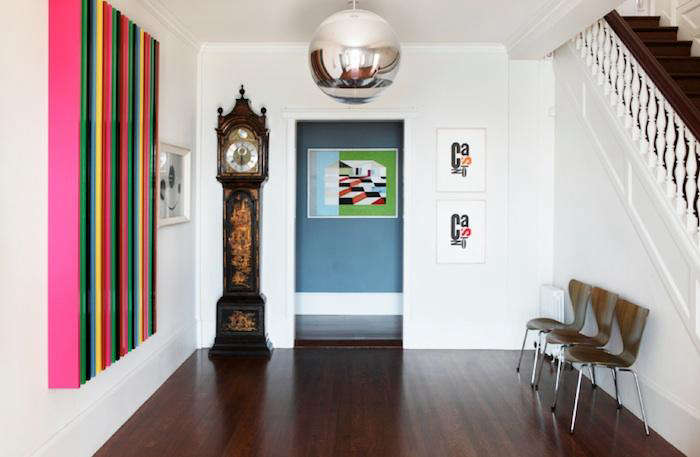 Above: On the first floor, Irish conceptual artist Liam Gillick's work on aluminum titled Revised Inverted (L) hangs next to British artist Paule Vézelay's Three Circles in a Crescent. The grandfather clock is a family heirloom ("my great grandmother's," our friend said), and in the blue hallway hangs Forum by contemporary British painter Morag Ballard. 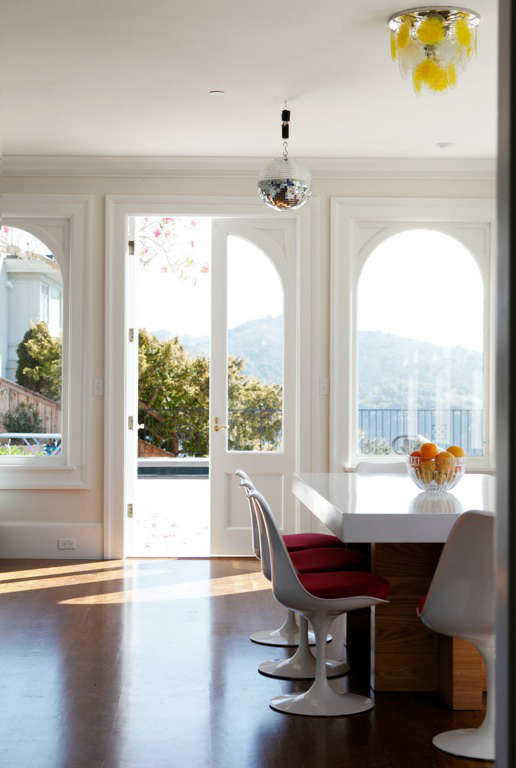 Above: The kitchen, moved during renovation to the front of the house. The Eero Saarinen chairs keep company with a custom-made table, a Murano chandelier purchased on 1stdibs, and a disco ball discovered at the Alameda flea market. 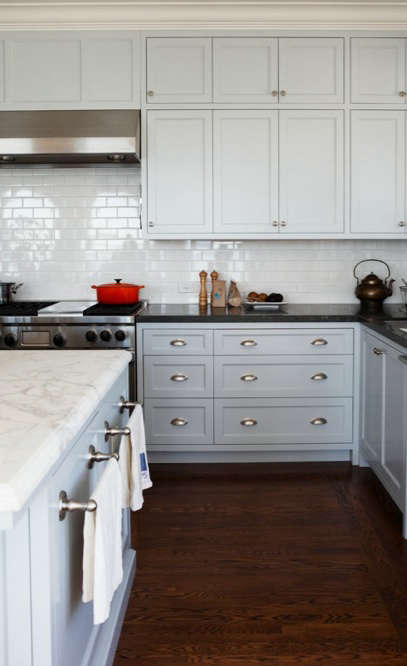 Above: Kitchen cabinets were painted with Benjamin's Moore's Gentle Gray (with the color lightened, by 50 percent, on the upper cabinets). Narrow oak planks throughout the house match the original flooring. 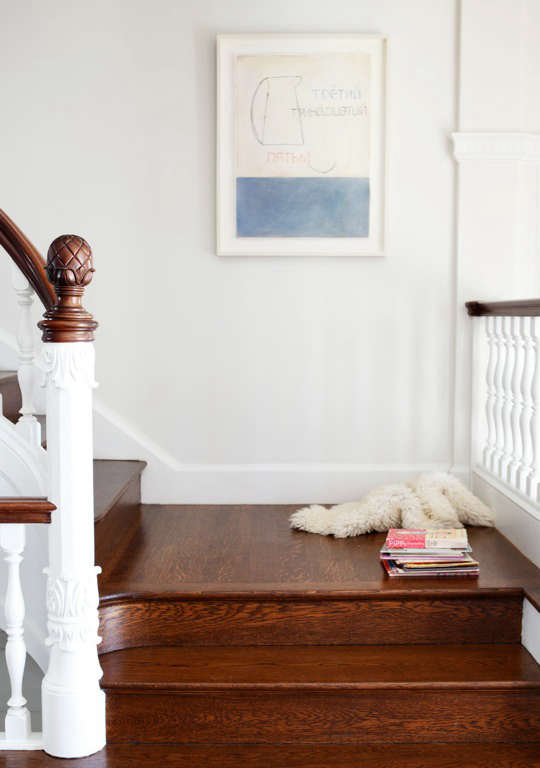 Above: A painting by Irish artist Guggi hangs in the stairwell. 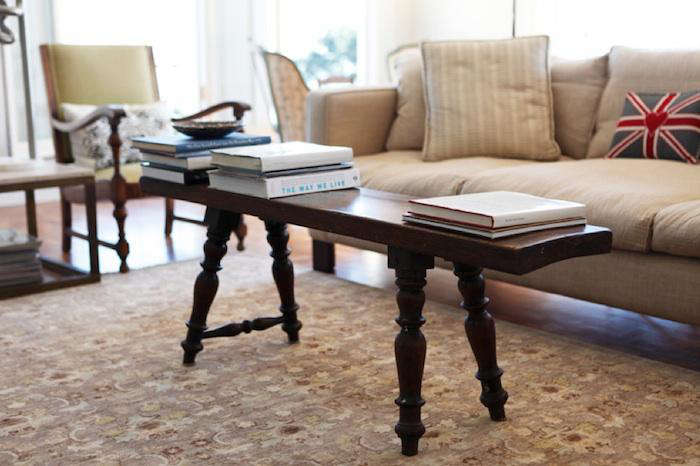 Above: In the living room, the throw pillow was a gift when the couple left London. The Turkish rug was one of several they bought "from a family that drives up to the house in a truck, throws down 20 rugs, and negotiates over a cup of tea." 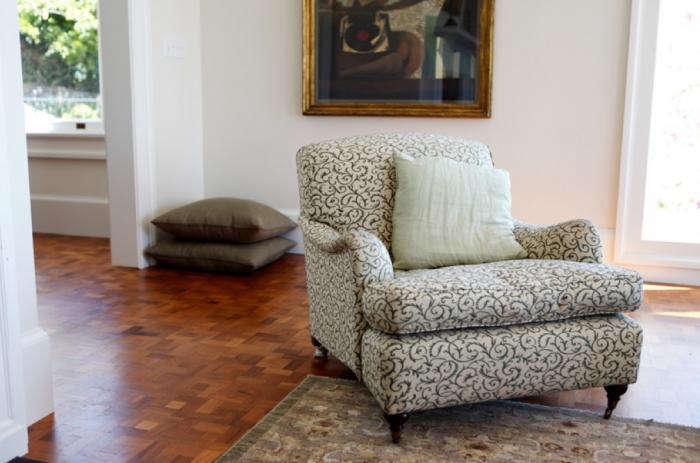 Above: On a living room wall is Daedelus Here to Stay, by British painter Alan Kingsbury. 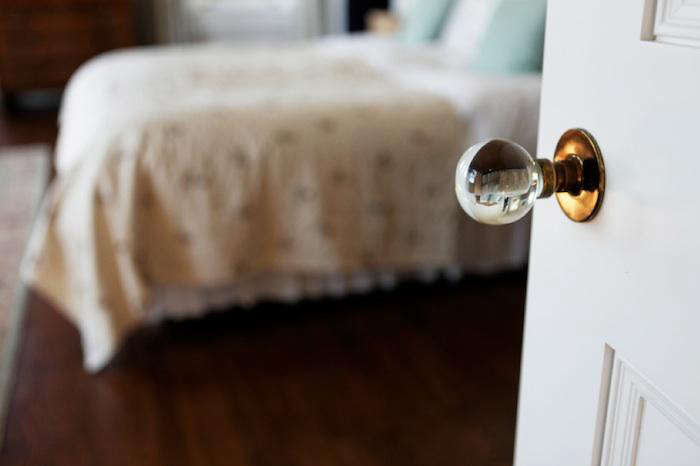 Above: There were enough original knobs for all the doors on the second floor. For the rest of the house, the couple found a close match from Emtek. 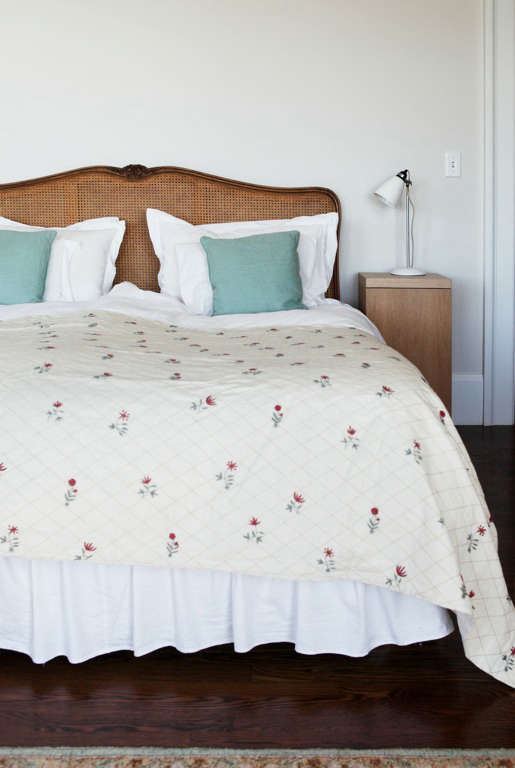 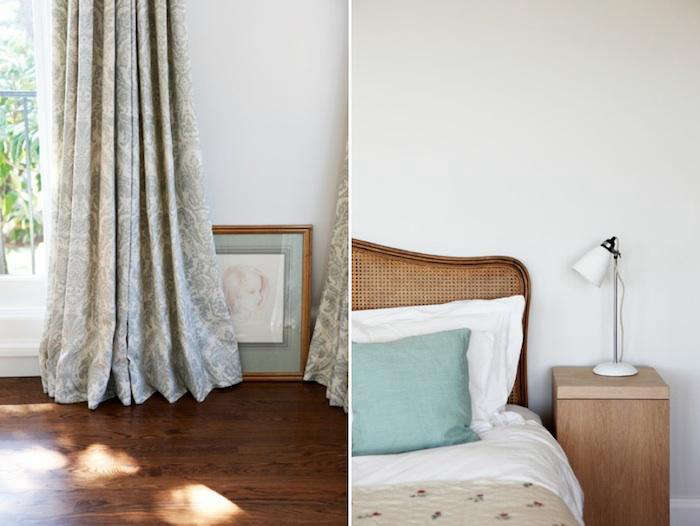 Above: In the master bedroom, a pencil drawing (L) of our friend at age nine (or possibly, ten); on the nightstand, a Bestlite lamp. 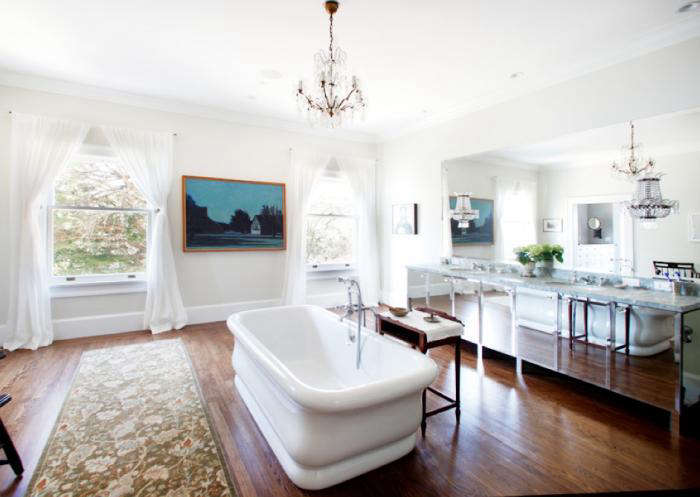 Above: In the master bath is Allen Whiting's Barn in Moonlight and a custom mirrored console. The chandeliers date from the Blanding family's tenure. 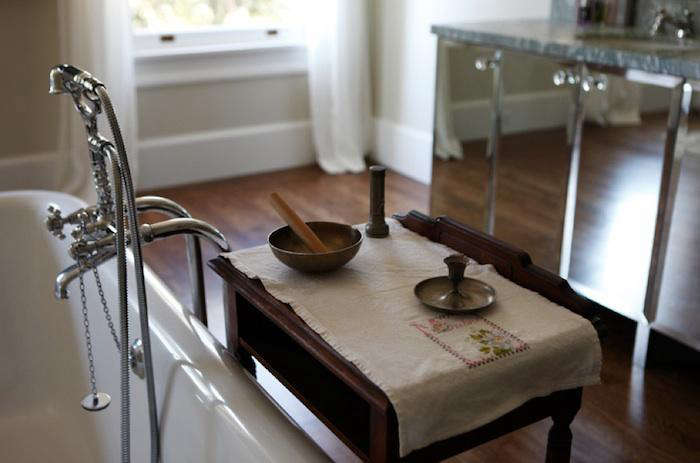 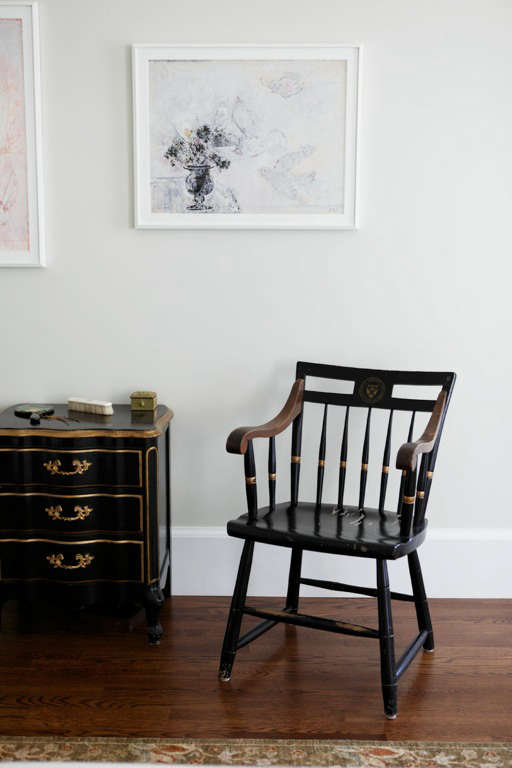 Above: A university chair anchors a corner of the bath; a painting by Francoise Gilot hangs above. 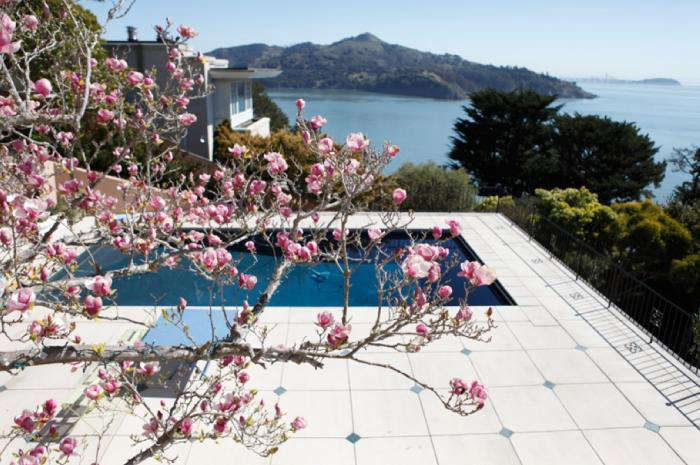 Above: The tile pattern is copied from Hearst Castle, another Julia Morgan creation, visited for inspiration. An old magnolia tree survived 18 months of construction. "We put quite a lot of effort into saving it," our friend said. It was worth it. 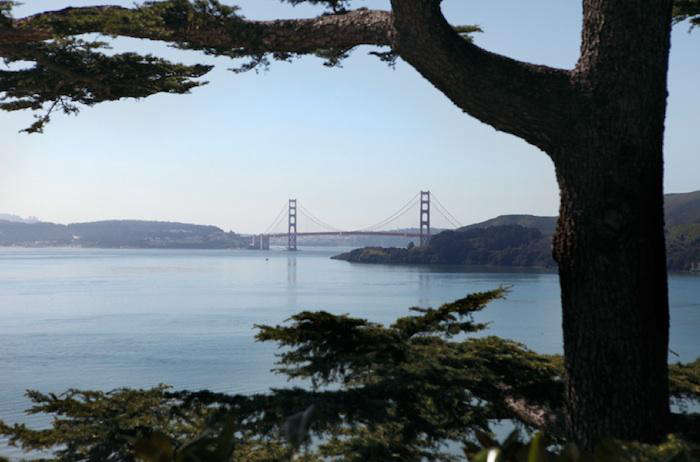 Above: The view from the upper terrace: the bay, Golden Gate Bridge, and in the distance, the San Francisco skyline.

Steal This Look: A Sunshine Bath in a London Townhouse