Furniture designer and antique restoration expert Caitlin Long has enviable remodeling skills. In her blog, The Shingled House, she chronicles life in her San Francisco household, and documents her many projects and ideas. “I get restless if I don’t always have a project in the works,” she says.

Seven years ago, she oversaw the design and construction of her Cole Valley house, including the installation of teak sink and bath surrounds. After five years of use, the teak was in need of restoration, and who better to tackle the job than Long herself? “You would think that a new house wouldn’t need remodeling,” she says, “but there’s always something to do here and there.” Read on for her step-by-step teak refinishing instructions, plus her best remodeling tip. 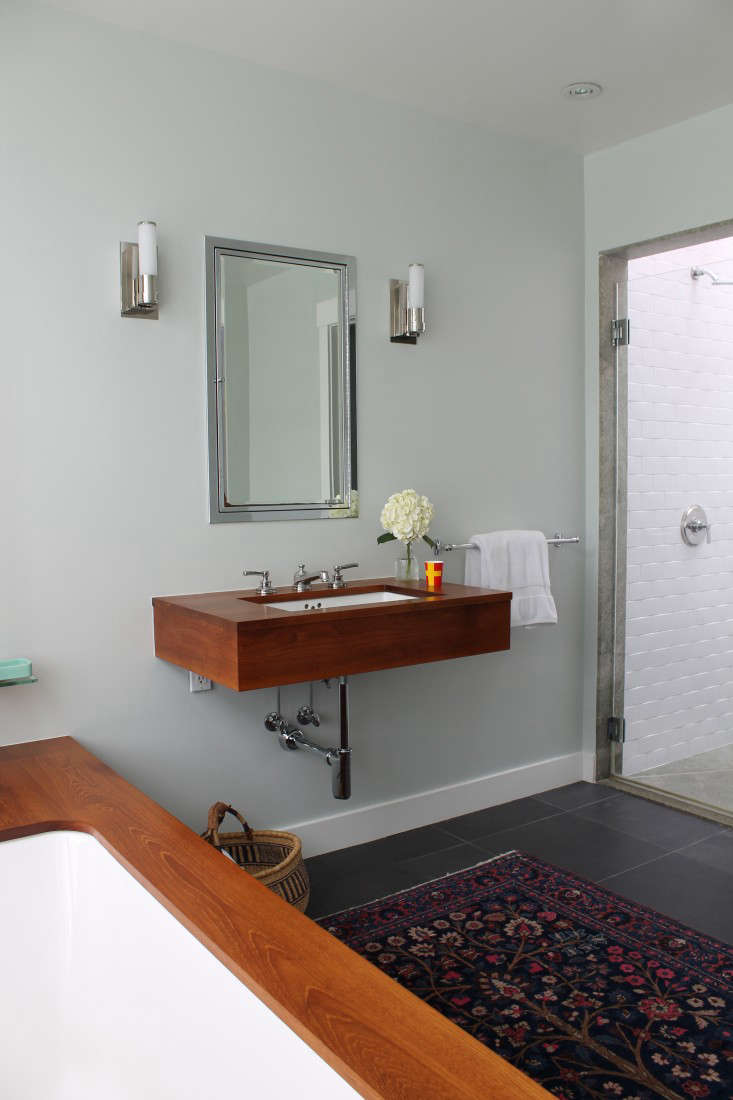 Above: In Long’s master bath, the sink and bathtub have teak surrounds. 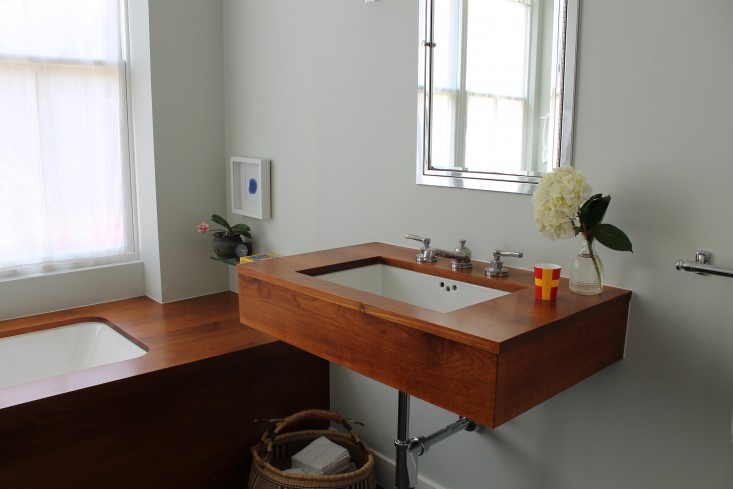 Above: After Long’s refinishing efforts, the teak looks as good as new. 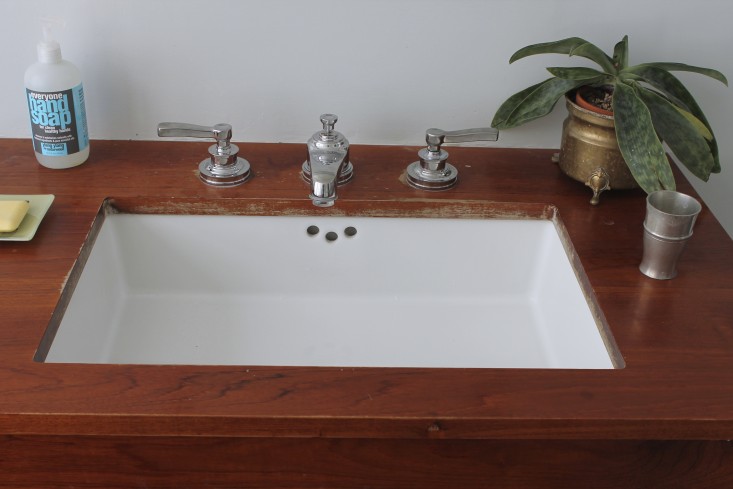 Above: Like the wood on a boat, teak surrounds need to be stripped and resealed periodically. 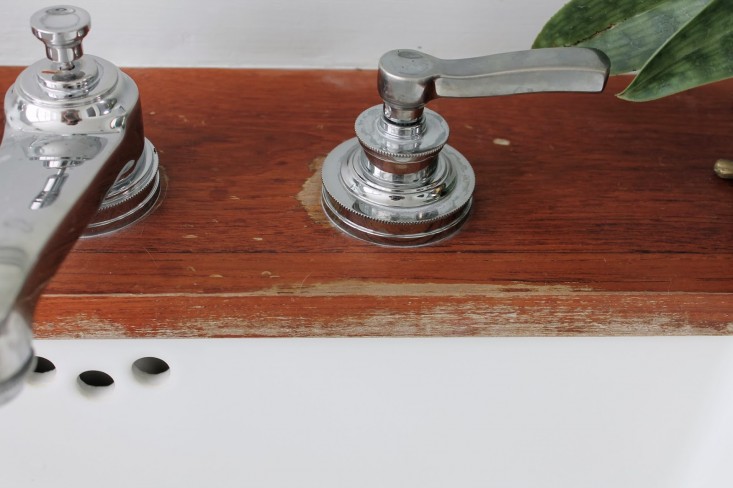 Above: Because the sink was used daily, its surround was in worse shape than the tub surround. 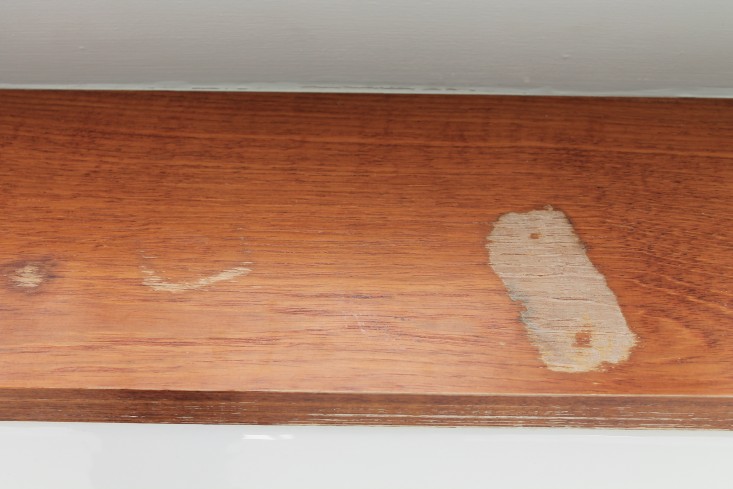 Above: Where the exposure to water was the most frequent, some of the finish was completely gone, leading to water stains and dents in the wood. 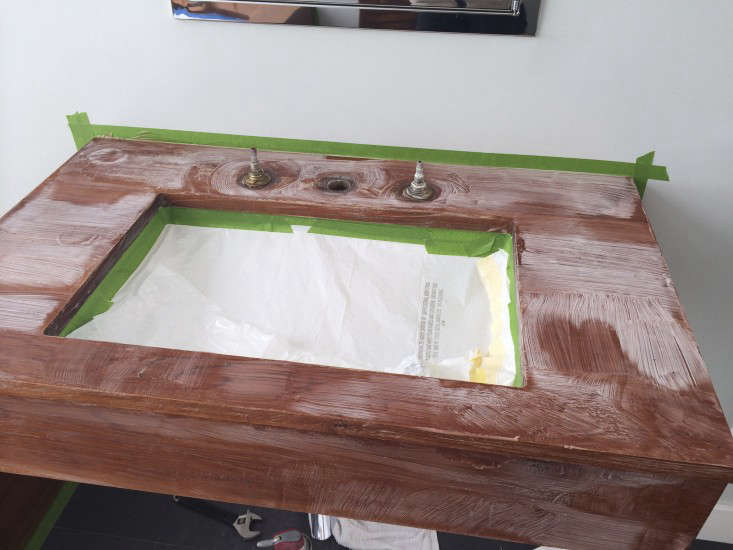 Above: Long was able to completely remove the sink’s fixtures, which made the refinishing process easier. She sealed off the porcelain sink with a taped plastic bag. 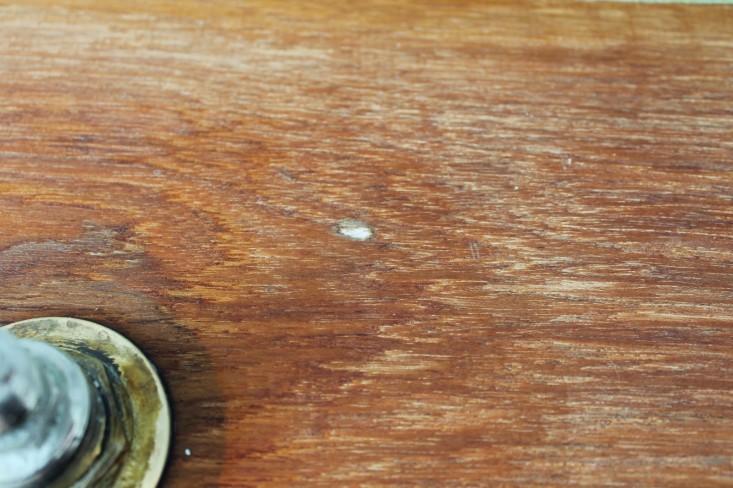 Above: Wood naturally darkens when exposed to UV light. A challenging part of refinishing teak is that it changes color and gets lighter as you sand it down and can end up looking splotchy. Shown here is dent that was too deep to sand away and so Long decided to steam it. “When you steam wood, it raises the pulp,” she says. “It’s pretty effective but obviously you can only do this if you don’t have a finish on it and if the dent isn’t a massive crater.”  Long typically conducts this process in stages: “Steam and let dry completely; sand, steam again, and then sand.” For detailed instructions on steaming a dent, see Long’s video. 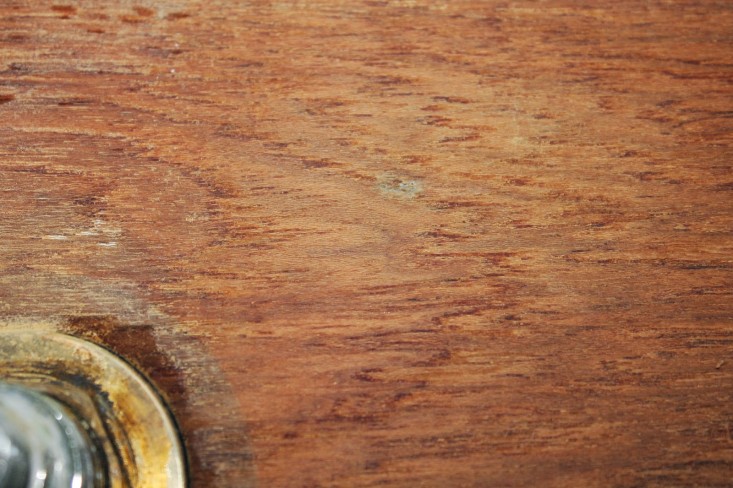 Above: After the steaming, the dent was improved considerably but not completely gone. Long’s next step was to fill the dent up with tinted epoxy. 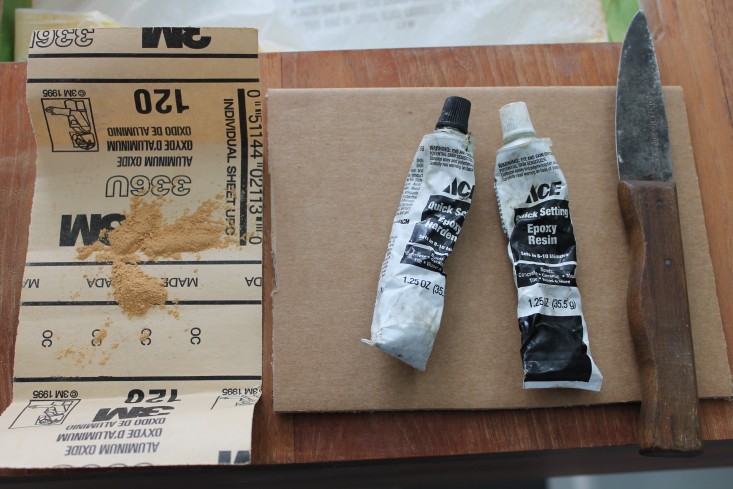 Above: Long prefers tinted epoxy over wood filler for repairing dents in furniture. “Epoxy  can be tinted with the dust from sanding, ensuring a perfect match. Plus epoxy has a very hard, closed finish as opposed to wood filler, which always looks a little pulpy to me.” 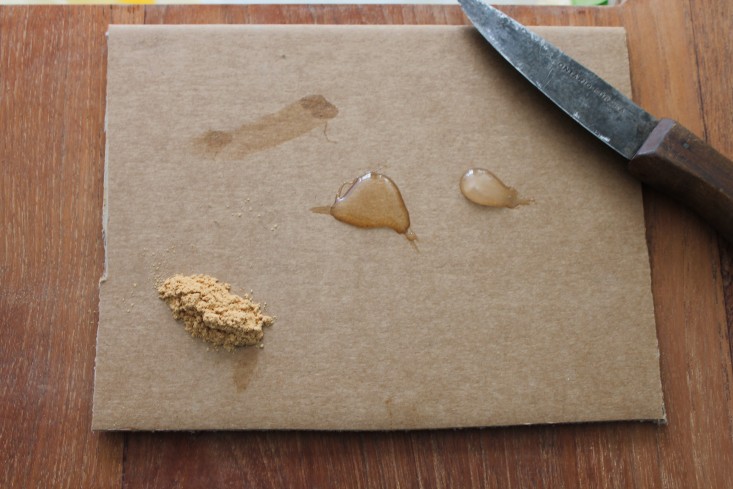 Above: “I use a two-part, quick-setting epoxy (10 minutes is good), so I have enough time to mix and fill without being crazed (but I also don’t have to wait like 25 minutes for it to set),” says Long. “There’s nothing worse than having your epoxy set before you’re finished, so don’t use one- or five-minute epoxy. I always measure out the two parts in separate blobs for accuracy. This also prevents the tubes from cross contaminating the tubes, making them unusable for future use.” In this video, Long shows how to quickly and effectively fill in the epoxy. 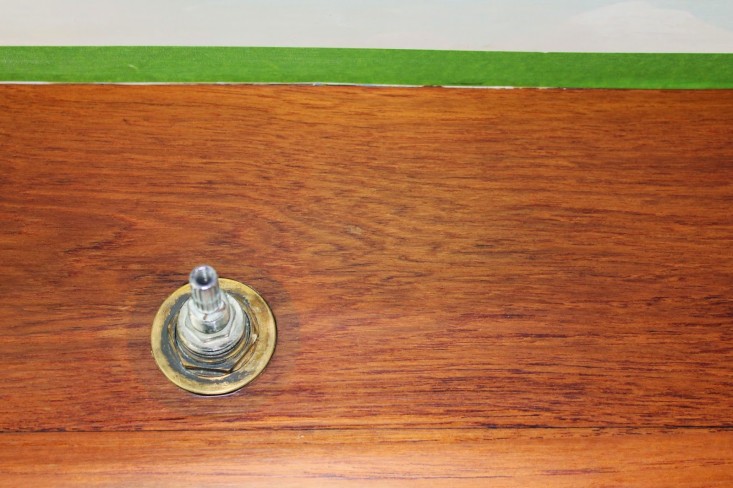 Above: Epoxy filled, sanded, and varnished, the dent is imperceptible. 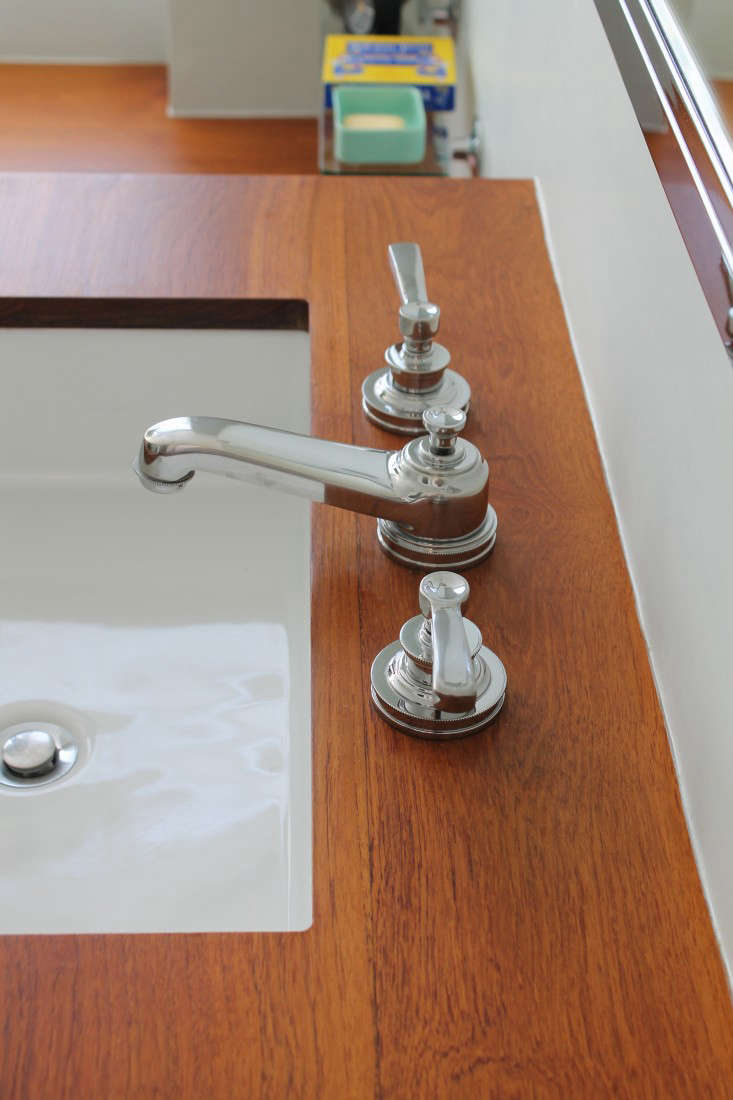 Above: “I chose a satin finish spar varnish to seal the teak. It’s slightly less shiny than the previous finish so I like it better,” says Long. “I find that if a wood finish is too glossy, it looks plastic-y and dated.” 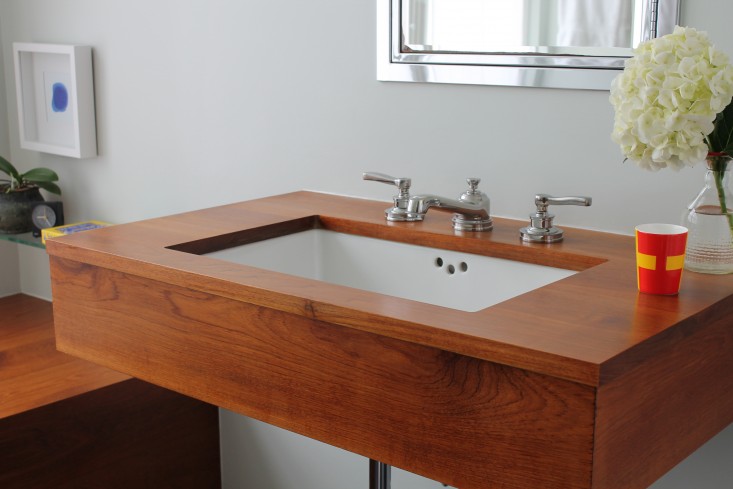 Above: The refinished teak sink surround is set against green/gray Silver Crest walls in an eggshell finish by Benjamin Moore. 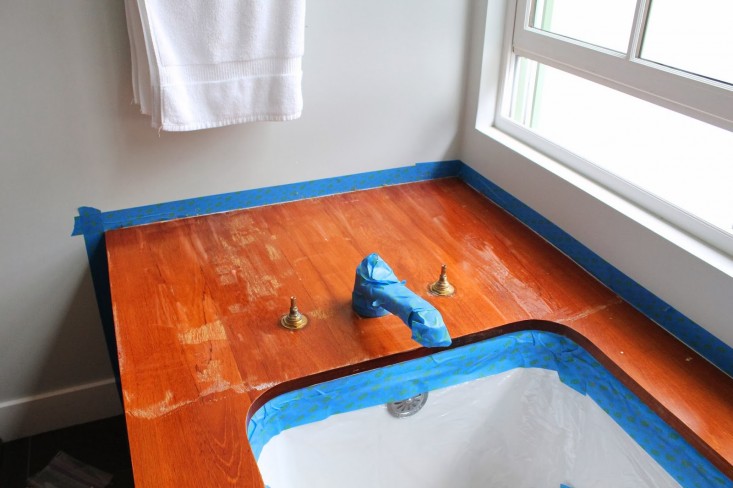 Above: As with the sink, Long taped and sealed off the porcelain tub with a plastic bag, but here had to work around the fixtures. 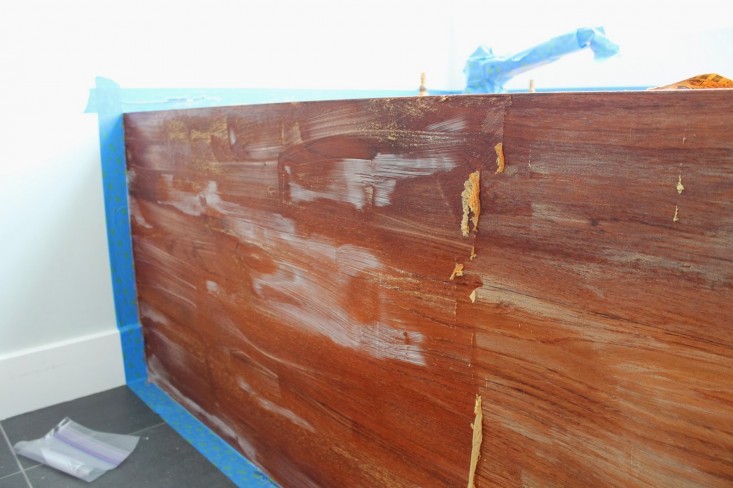 Above: To neutralize the wood in order to ensure that the new varnish would adhere, Long needed to strip the existing varnish. Her preferred product is Citristrip, a non-toxic gel stripper that is biodegradable and stays wet for up to 24 hours (so that large surfaces can be coated and worked on over time). Prior to varnishing, Long sanded the surface lightly (up to 200 grit) and then wiped it down with a tack cloth to get rid of all of the dust and tiny particulates that can show in a varnished finish. 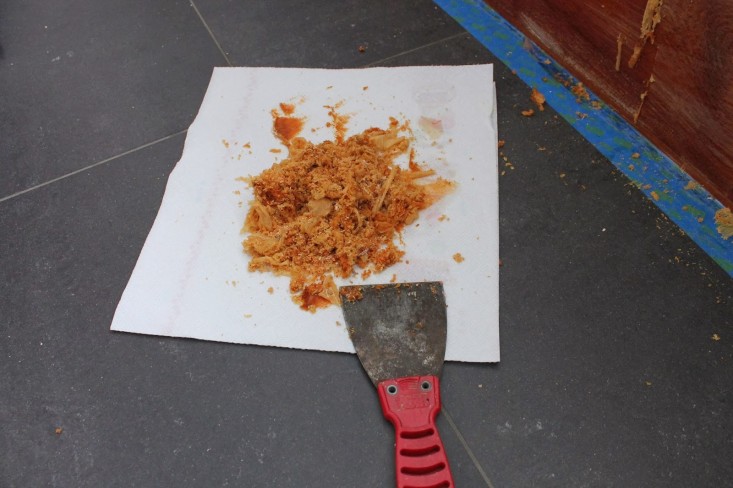 Above: Scrapings of debris from the old varnish. 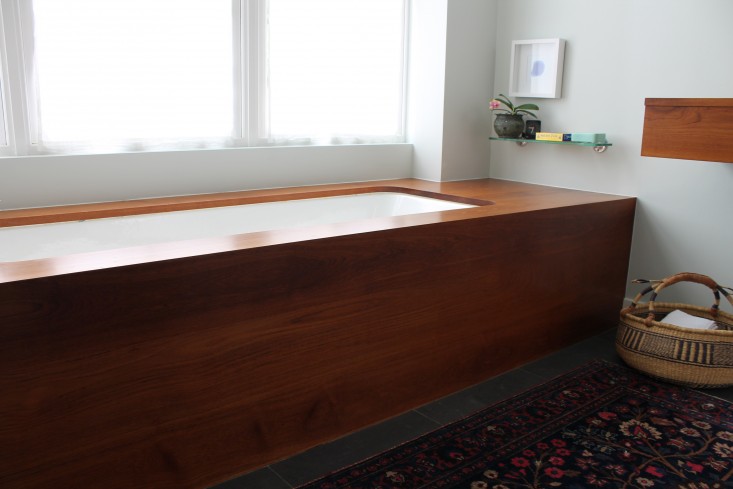 Above: Thanks to Long’s efforts, the bathtub looks as good as new. Her best remodeling tip? “Never take shortcuts when refinishing. If you do all of the steps properly and never rush the process, it shows in the results,” she says.”This means: keep a clean work area, tape things off, use the right type of brush, don’t rush the layers of varnish, wipe down all surfaces meticulously prior to finishing, and apply many thin coats rather than a thick one.” And if you’re working with varnish, she has this advice: “Varnish ages in the can once it’s been opened and exposed to air. So it’s better to buy two small cans than one big one.”

For an easy way to introduce teak (and other moisture-resistant) in the bathroom, see 10 Easy Pieces: Wooden Bath Mats. And go to Gardenista for the World’s Best Outdoor/Indoor Teak Furniture.

Inspired by Caitlin’s industriousness? See our catalogue of DIY Projects for more ideas.

A New Twist on the Nautical Knot

Tie One On: Dutch Ceramic Lights from Folklore

All in the Details: Pantone Powder-Coated Hardware from Designer Mark Lewis’s Online Shop