It's said that we are the architects of our own destiny. For a DIY Australian couple, who toiled to turn their 1960s ranch-style house into a dream home, the saying is true in a literal sense.

When childhood sweethearts Melissa Bombardiere (a graphic and fabric designer) and Damian (a plumber), were starting out, they decided to save their money to fulfill Melissa’s dream of a trip to New York. Instead they got practical and used their funds to buy an investment property, which they upgraded and rented out before they moved into themselves. It was during the first remodel project that Melissa got the “renovation bug," so when it came time to start a family, she and Damian took the plunge and undertook the whole overhaul themselves. With the help of family, friends, and a few professionals, they constructed a new addition and completely renovated the original structure. Perhaps their most remarkable achievement? They came in under budget.

All photography by Melissa Bombardiere. 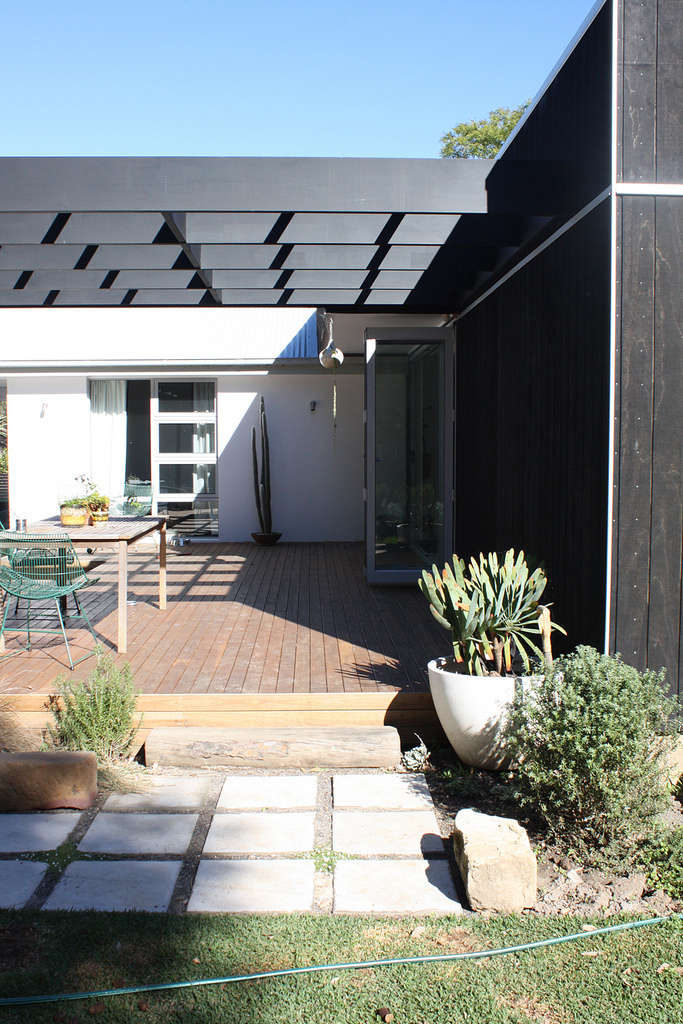 Above: The lattice squares of the black pergola, which serves to extend the line of the house and create of seamless flow between inside and out, is echoed in the windows and paving stones. 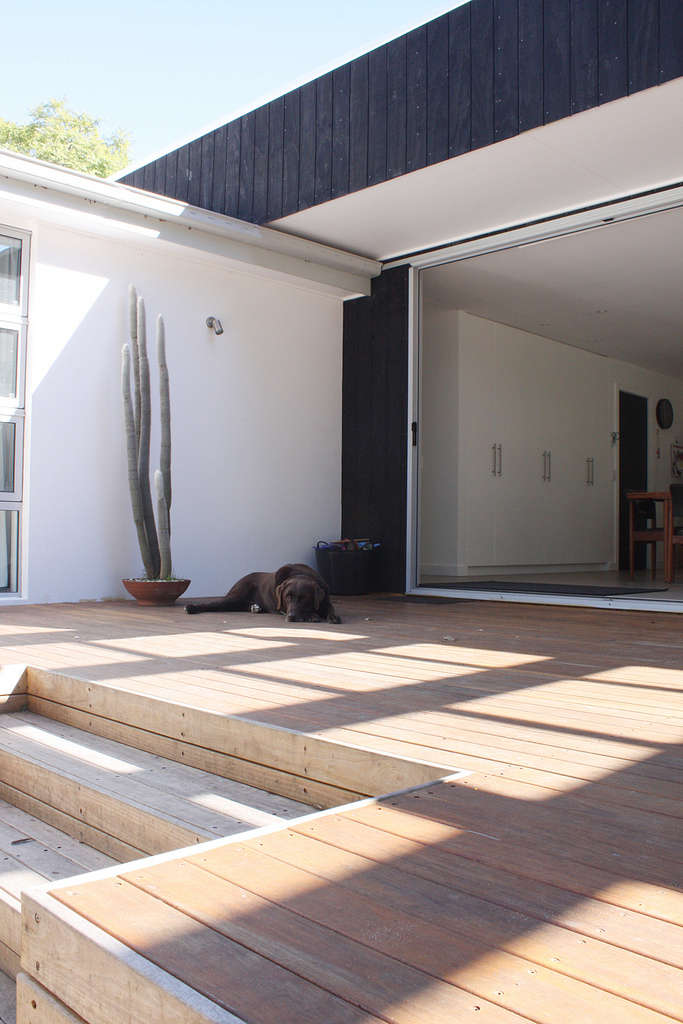 Above: Dramatic horizontals reign where the addition meets the original house meets. The couple did all the siding and roofing themselves. "The box": Melissa's concept for the new addition was to "put a box on the back of the house" that didn't have to match the original. Her brother-in-law, a general contractor, suggested Shadowclad in striking black, which the couple could install themselves. 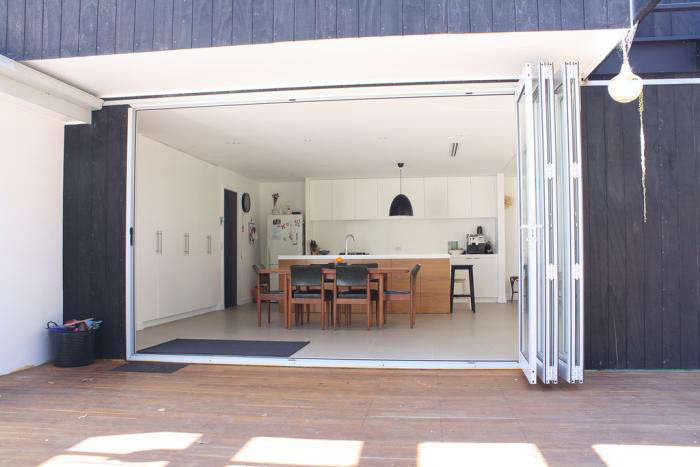 Above: Apres-renovation: folding doors create a seamless flow behind the indoors and the outdoors. With the help of family, Melissa and Damian laid the concrete slab foundation for the addition themselves. Then Damian hired a carpenter friend to help him frame the house and install the huge windows and bi-fold doors. 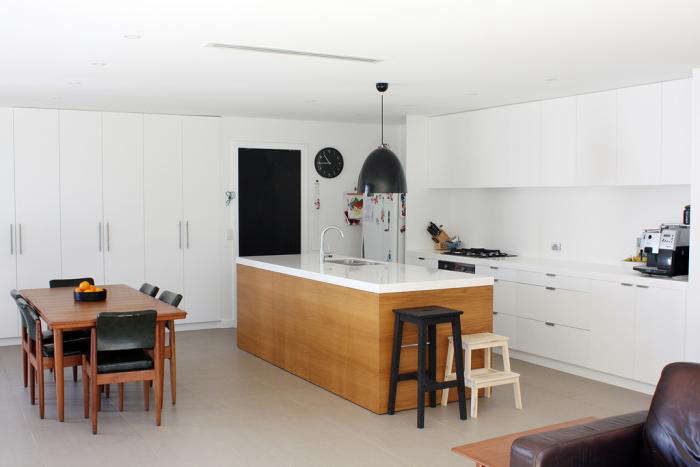 Above: Damian's grandmother's Chiswell teak dining set is a prefect retro-modern complement to the dining room. 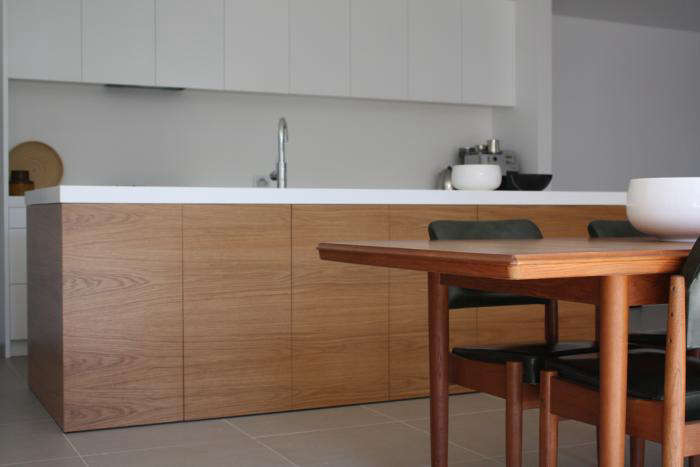 Above: The couple demolished the old kitchen in the original structure and relocated it in the addition. The new open layout includes the kitchen, dining, and living room. 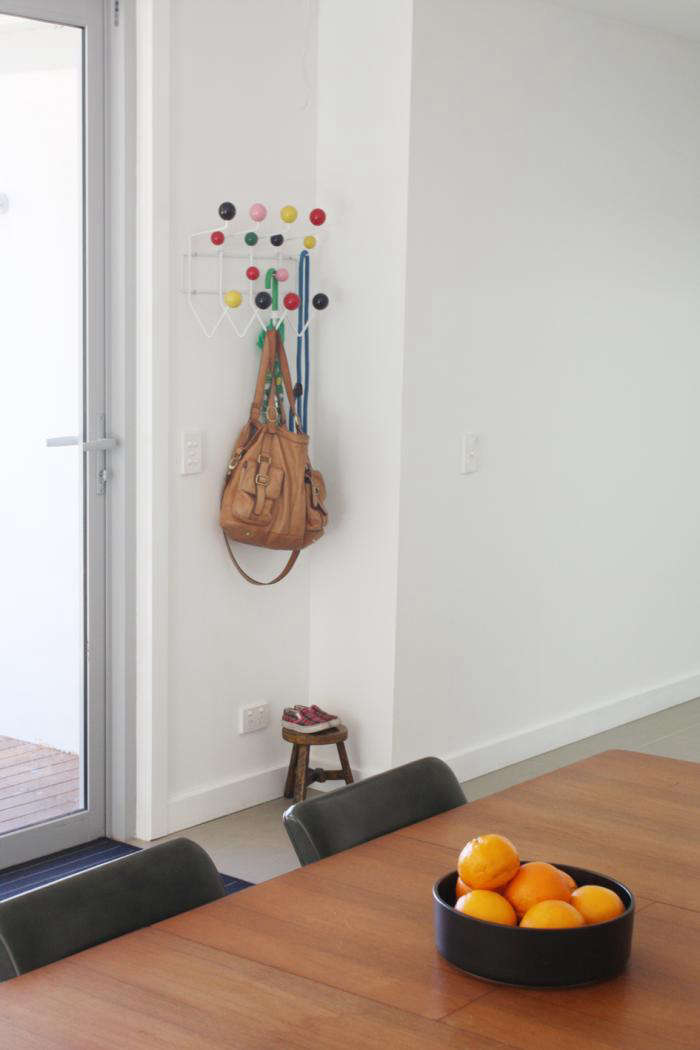 Above: Eames hooks and a bowl of oranges provide a bit of bright color to break up the otherwise rigorously black and white palette. 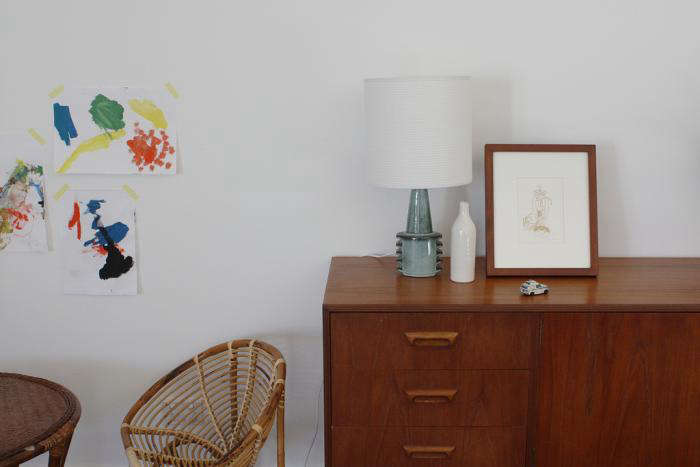 Above: With the house still a work-in-progress, Melissa next hopes to acquire more art. Until then, daughter Lola's work will do just fine. 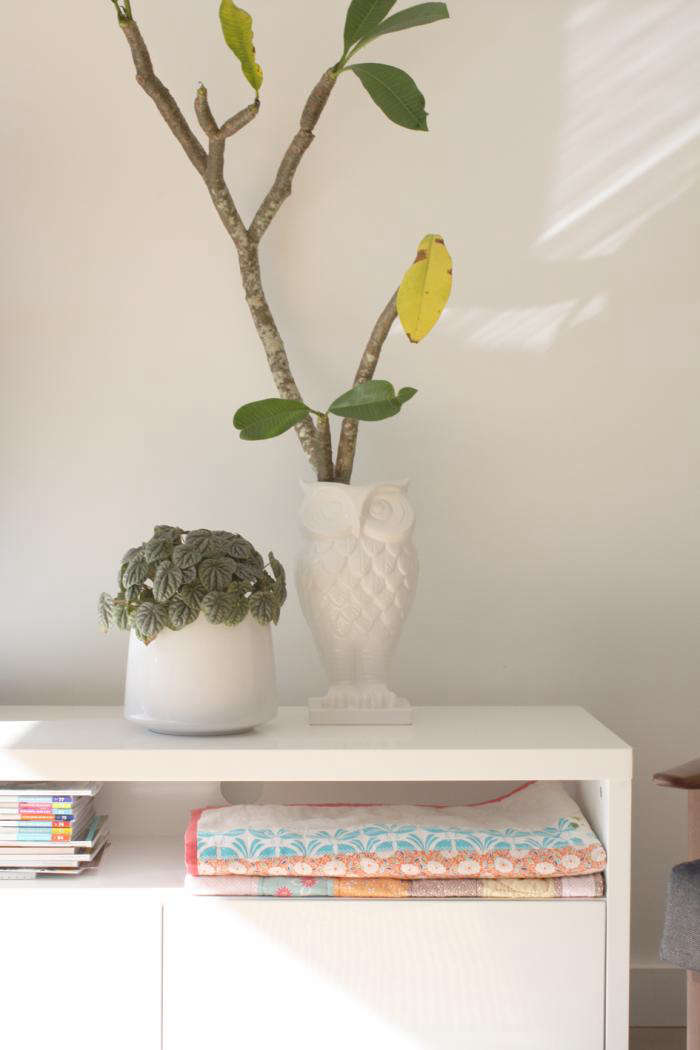 Above: Melissa's quilts add a soft, colorful touch in the living area. 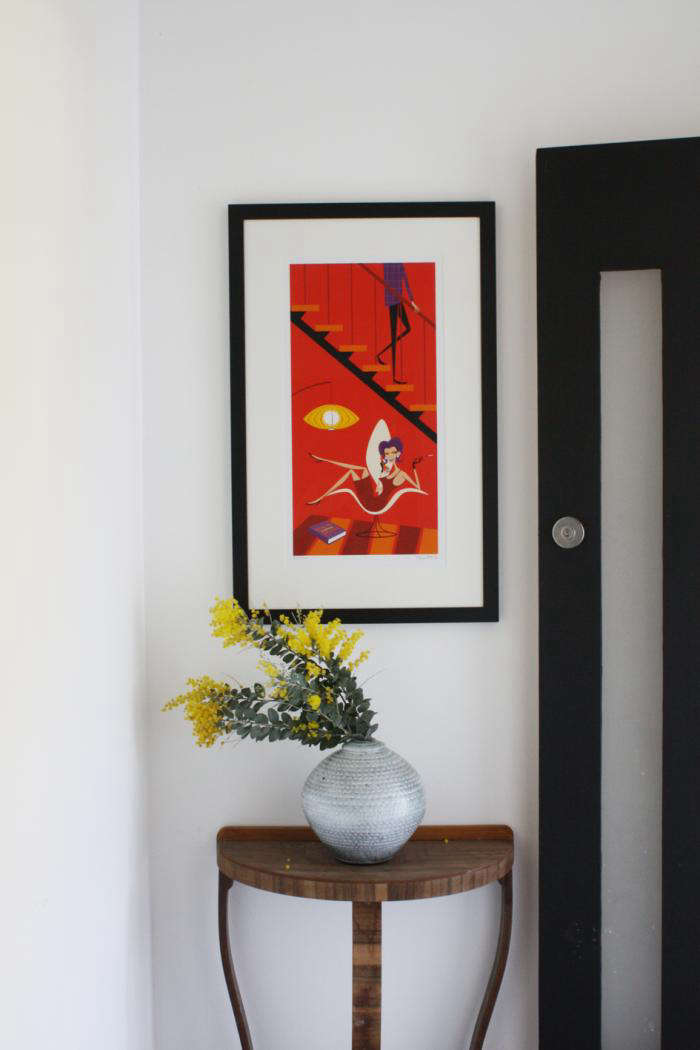 Above: In the front entry yellow flowers and a Shag print in bold red add a striking note next to the black doors. 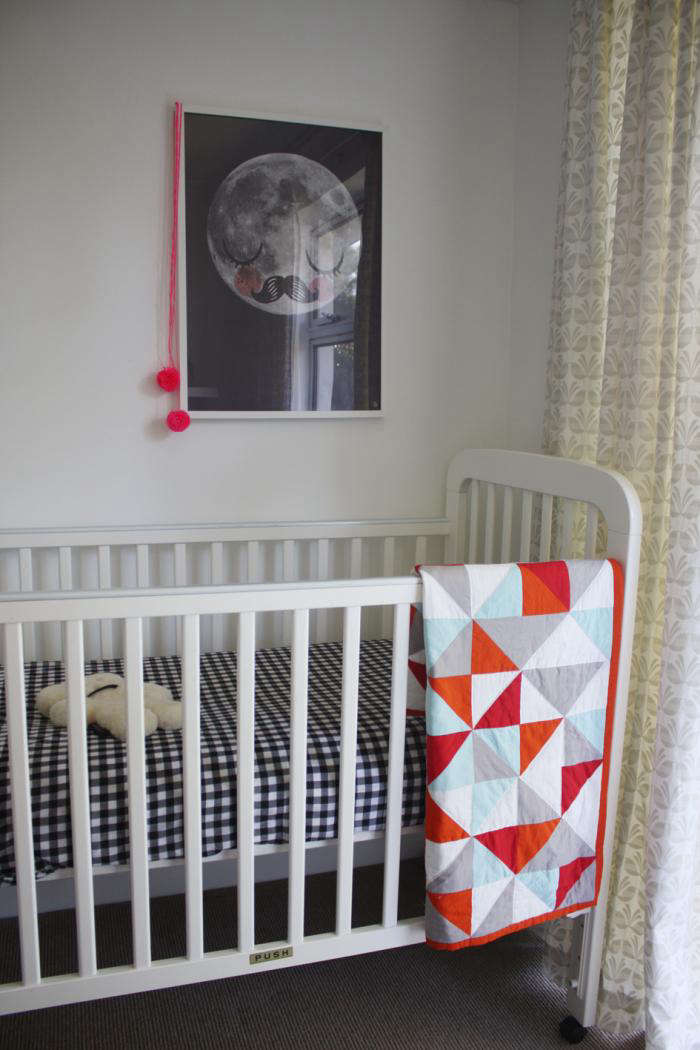 Above: Baby Nina keeps cozy under one of her mother's own quilts as well as a lunar poster by Martin Krusche. 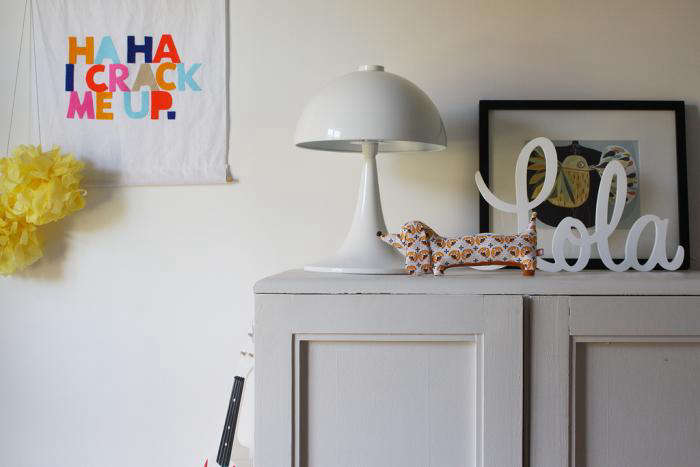 Above: Melissa made the "Ha Ha.." banner herself, sewing felt onto linen. The bird print on the cabinet is by Matte Stephens. 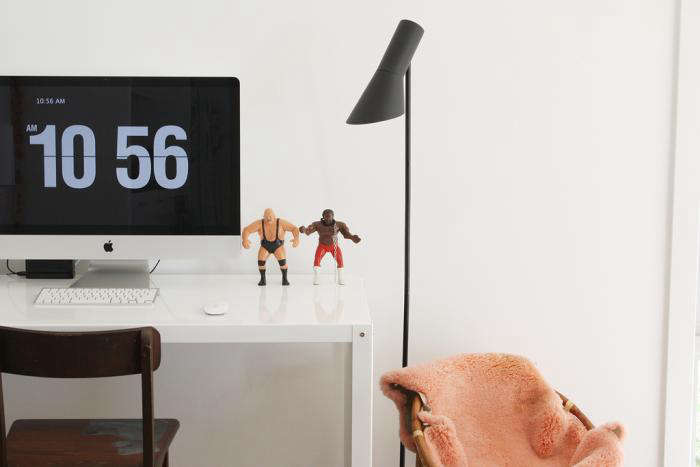 Above: Even the office reflects Melissa's signature style: black and white modern, softened by a few textiles and a bit of whimsy. You can follow more of Melissa and Damian's upgrades on her blog. 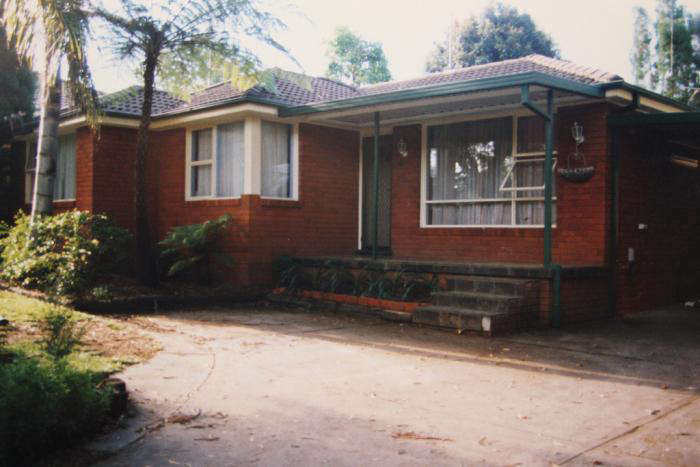 Above: Nestled in a "great neighborhood" outside of Sydney, the "before" was a small, chopped-up, 1960s brick structure—the wrong house in the right location. 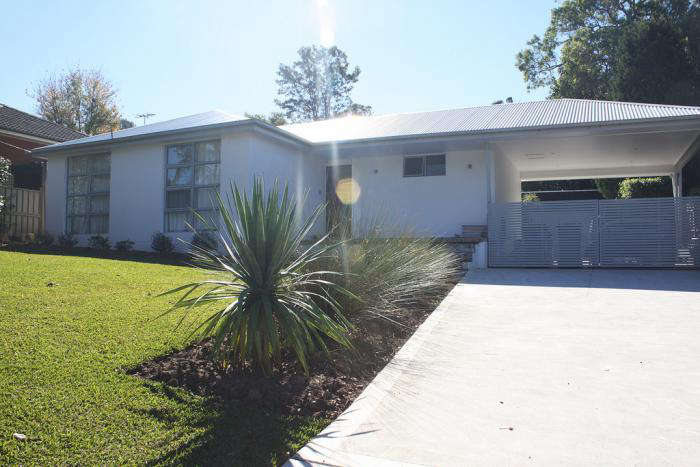 Above: The "after" presents a much more streamlined and unified facade. The couple added the carport to extend the line of the house, extended the front to meet the adjacent wall, and added the large windows.

Saving the Earth, One Trug at a Time