With their aesthetics aligned and a tight budget to keep them in check, graphic designer Jennifer Morla (of Morla Design) and her architect husband, Nilus de Matran (of Nilus Designs), turned a small 1906 Victorian into a contemporary structure, a process that not only took eight months but was, as Morla explains "absolutely painless."

For the record, this is not how most people describe the renovation of a house. For this San Franciscan couple, however, having a budget to adhere to was "a great equalizer." As Morla says, "We don't have a Wolf or a Sub Zero; instead we focused on floor-to-ceiling windows, wood floors, and decks off every room." The couple also wanted an open, loft-like layout, but with two small children they also wanted the space to feel like a house. They got the best of both worlds with a reverse layout, which features an open plan living room at street level with bedrooms on the lower level of their double hillside lot. "Nilus is brilliant at creating the most amount of livable space with the least amount of space," as Morla puts it. 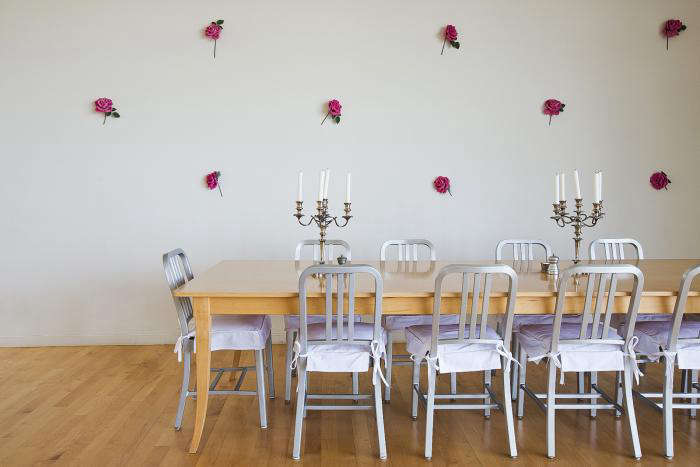 Above: Morla created the wall installation using silk flowers left over from a photo shoot. The 10-foot-long table seats 14; the Emeco Navy chairs "are lightweight, indestructible, and always seems contemporary even though they were designed in 1940" (she added slip-covered cushions for comfort). 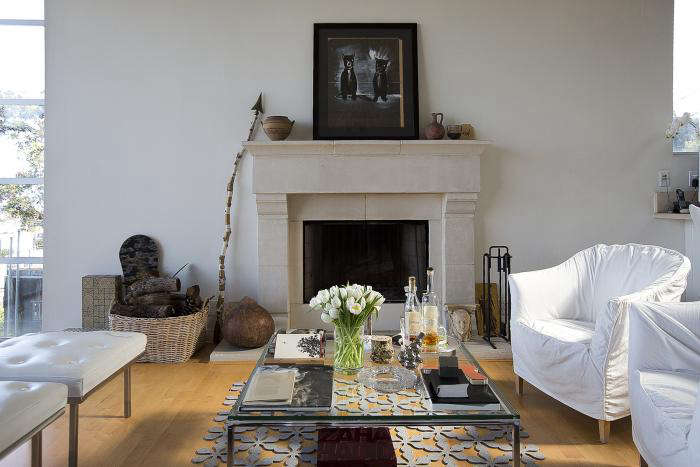 Above: On the mantle are Grecian vases that Morla inherited from her grandfather. During the evening, the couple removes the painting and screens movies (a projector is mounted on the opposite wall). 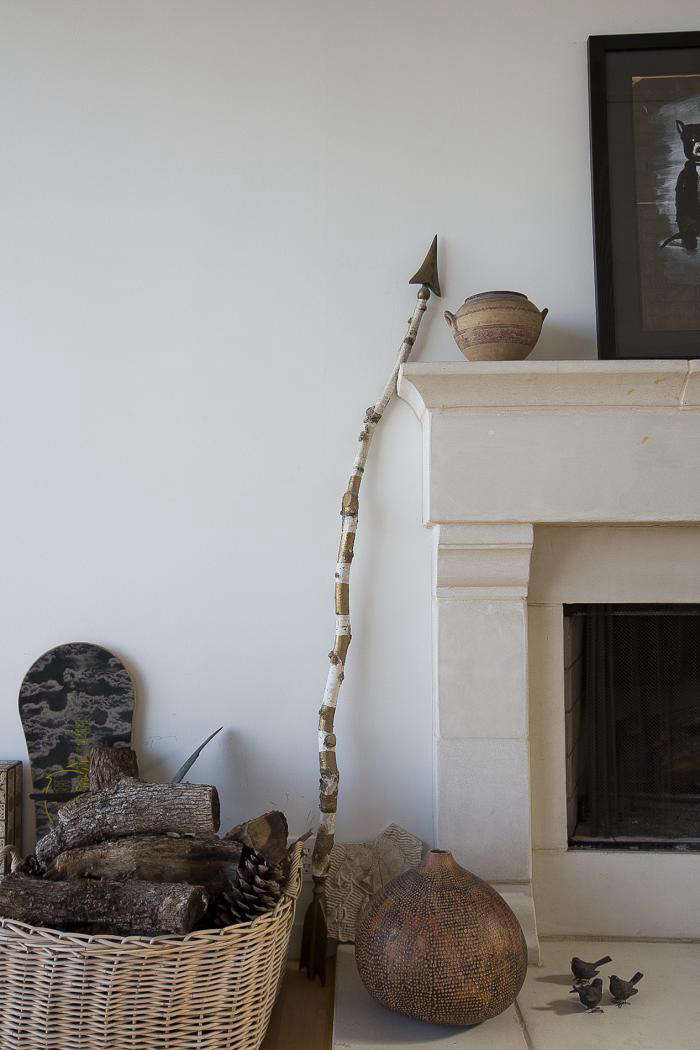 Above: The cast concrete fireplace and mantle adds a bit of grandeur; de Matran designed the unit to be flush to the wall. It protrudes on the exterior of the house but it's wrapped in galvanized metal to add a nice architectural detail. Morla purchased the arrow with gold leaf stripes in the eighties. 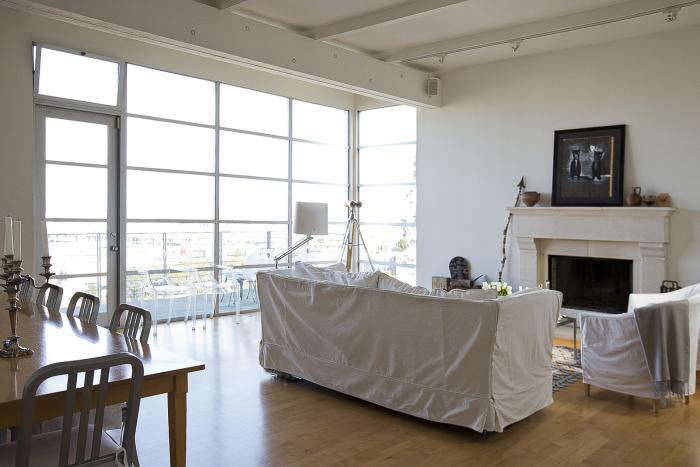 Above: The floor-to-ceiling windows take advantage of the east facing views of the Bay Bridge. Doors leading onto decks in every room make the house feel much bigger. De Matran conceived of the corner window in a nod to Frank Lloyd Wright, a small detail that expands the view and adds more light. Morla, who likes a "really true white," used Whisper White by Benjamin Moore on the walls. She's been a proponent of white slipcovers forever, even when her girls (now 16 and 17) were small. "Chocolate and spilled wine? I just bleach them." 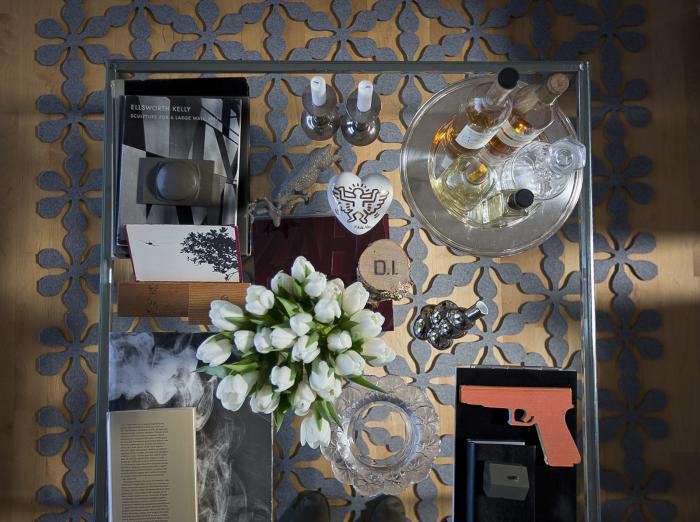 Above: The rug beneath the coffee table is one of Morla's designs, which she created when she was a visiting artist at the Workshop Residence in San Francisco. The pattern is the Clarendon modern asterisk made of raw natural felt. The collection on the table includes a Marcel Wanders Egg Vase, a piece of wood by David Ireland's, a Keith Haring Heart, a Lalique bowl, Swid Powell candlesticks, and a collection of books, including one from Zaha Hadid ( a friend of de Matran). 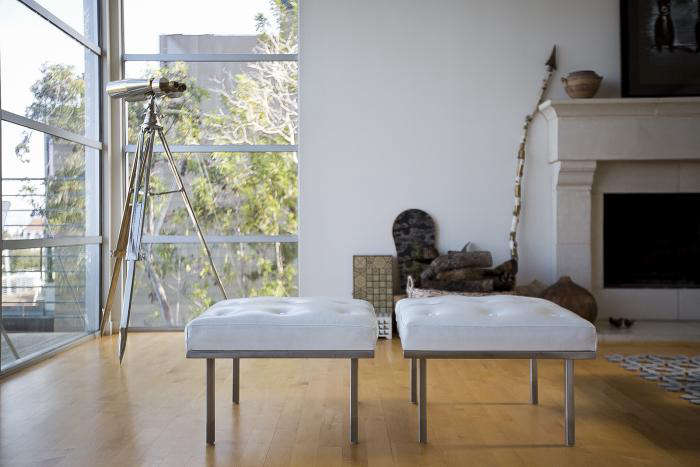 Above: Morla, who is a fan of ottomans, designed this pair of leather ones with aluminum legs. "You can put them together as one piece or split them apart; leather is a perfect material as you can spill anything on it and it's easily cleaned." 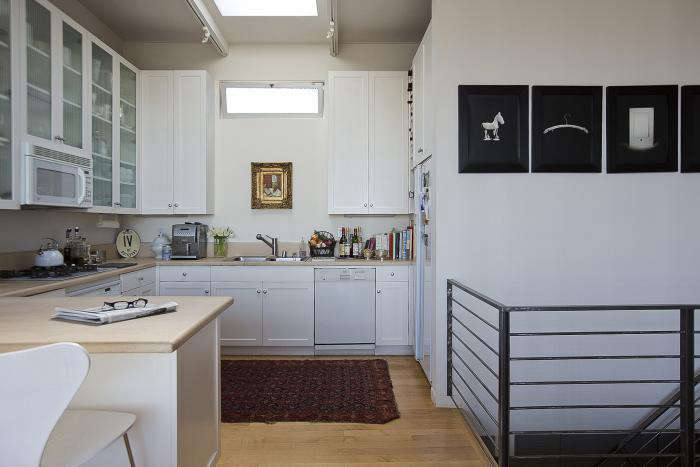 Above: The couple incorporated a concrete countertop in the kitchen area to tie in with the concrete mantelpiece. A skylight was added above to bring in extra light. 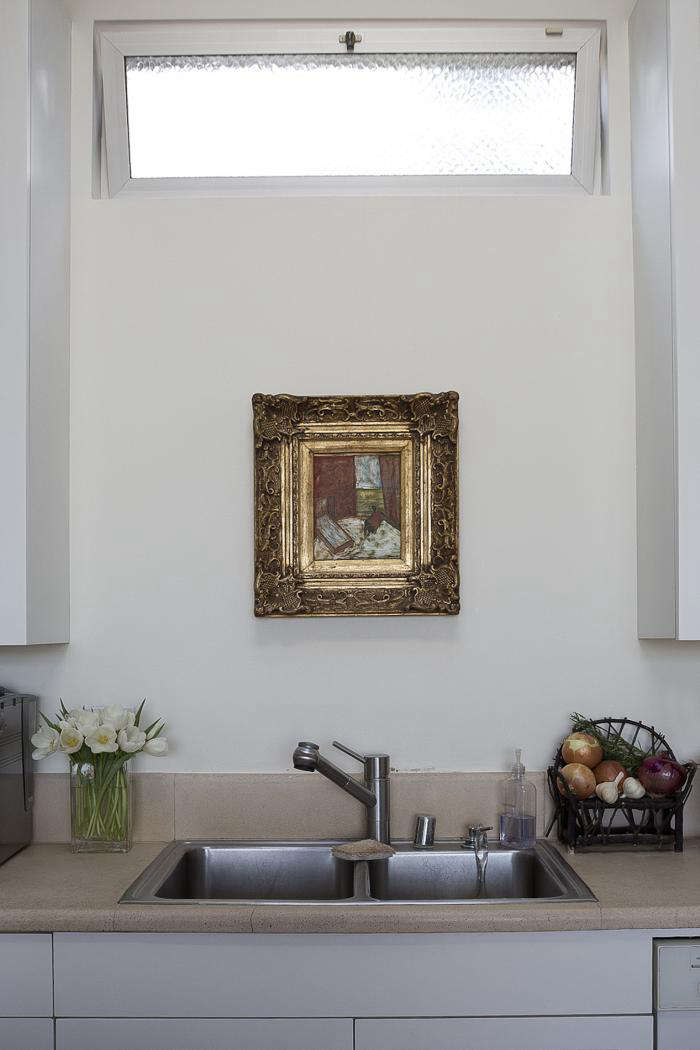 Above: The egg tempera painting above the sink is by de Matran. 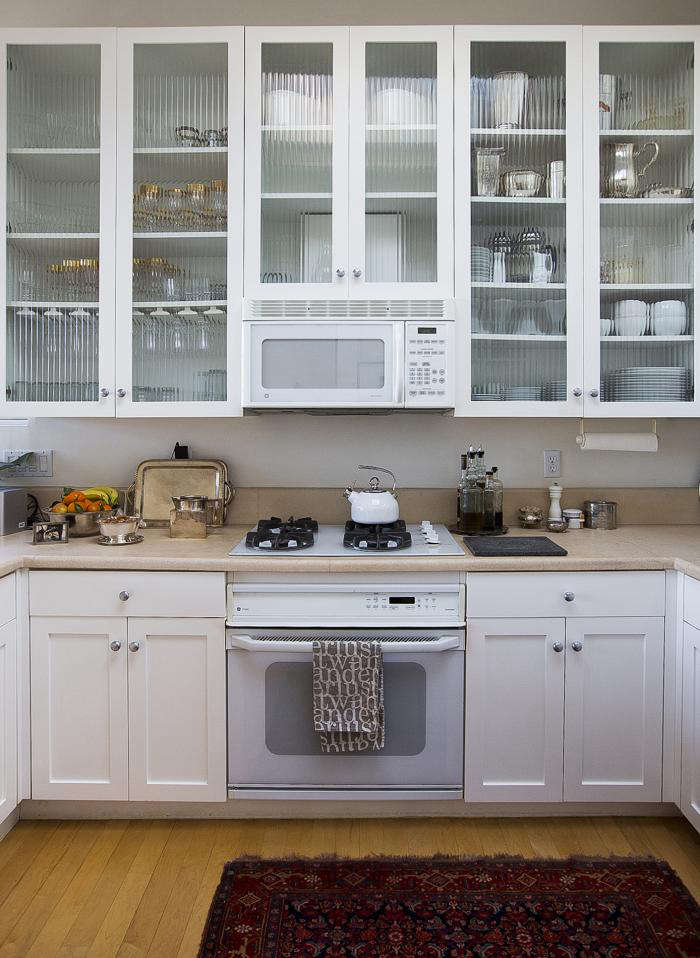 Above: The fluted glass cabinets add a note of formality to the kitchen; the cabinets are taller than standard, taking advantage of the ceiling height in the open floor plan setting. 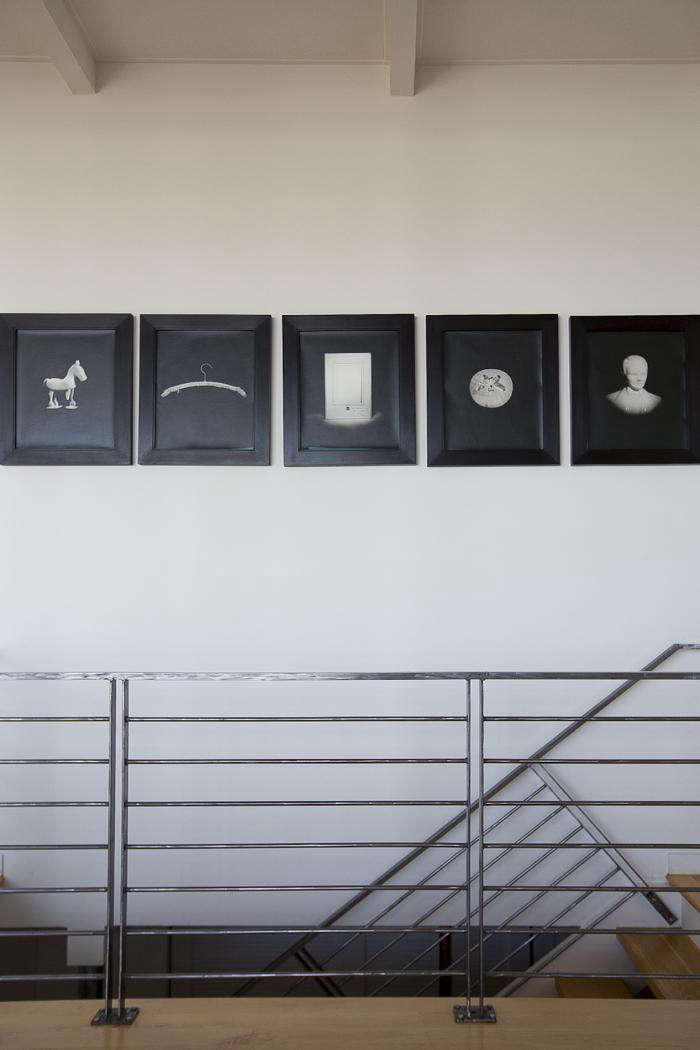 Above: A wall of photographs by John Priola from the Fraenkel Gallery. There is no hallway; instead the staircase is incorporated into the design of the open living space. 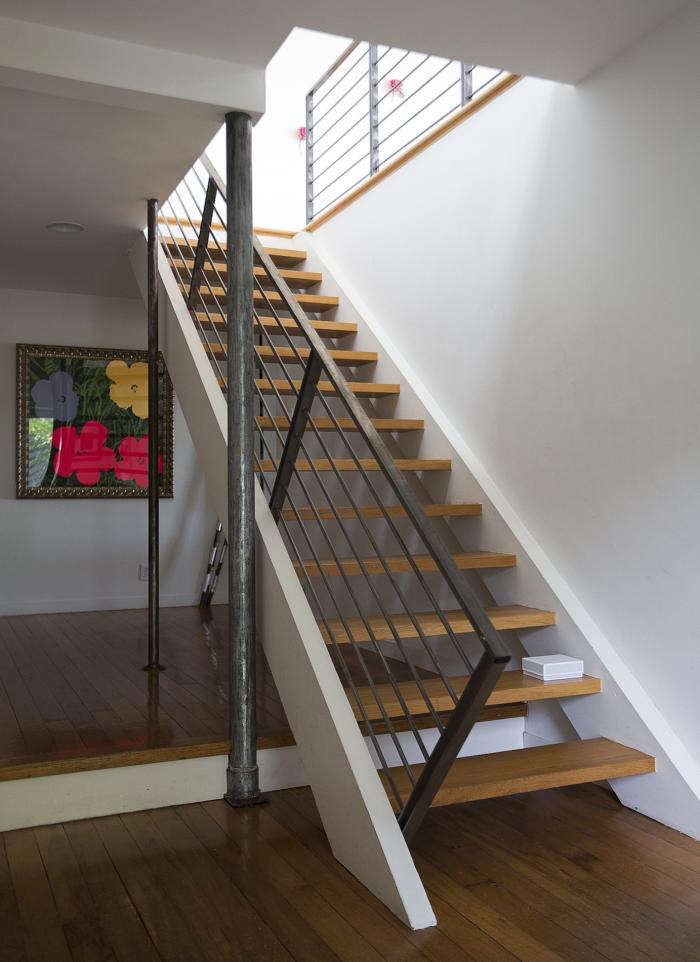 Above: De Matran allowed the metal pole support structures to be exposed. Closets line one wall, while the children's bedrooms sit on the other side. The Warhol Flowers piece on the far wall was purchased by Morla (she worked with Warhol at the Factory when she was an art director at Levi Strauss). 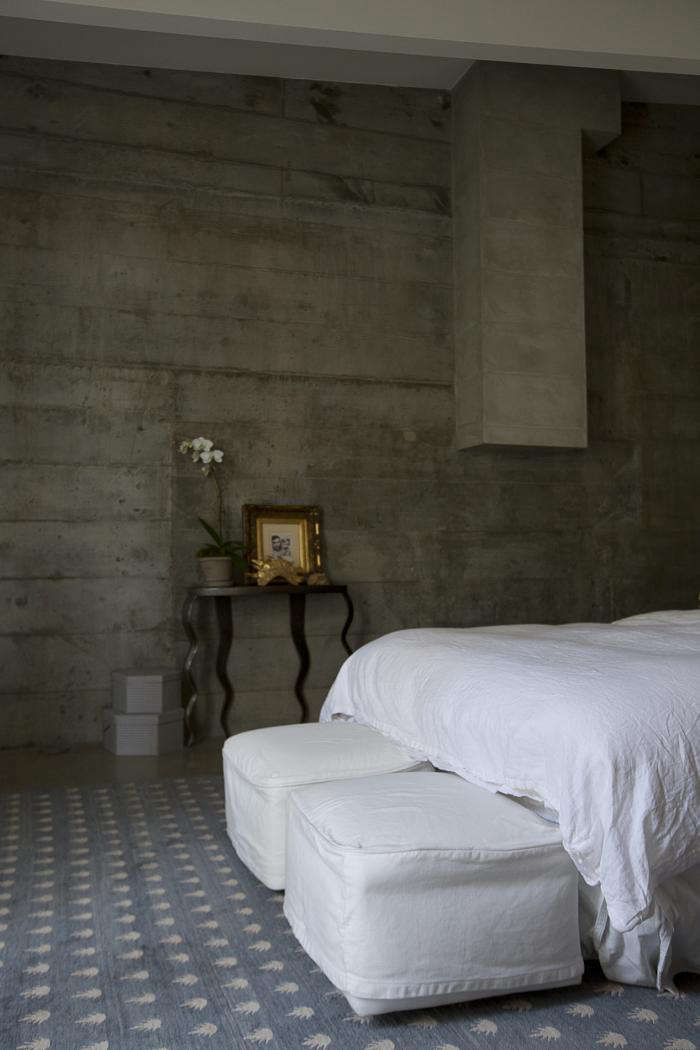 Above: The master bedroom features cast concrete walls and floors. The patterned Tibetan wool rug adds a note of warmth and a touch of color. 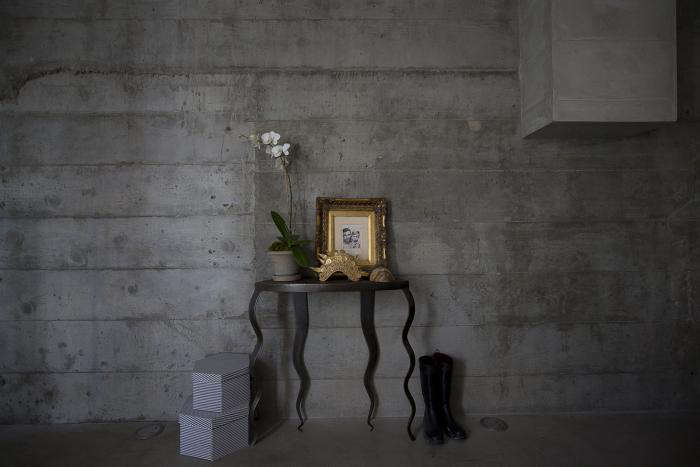 Above: A whimsical side table in the bedroom. 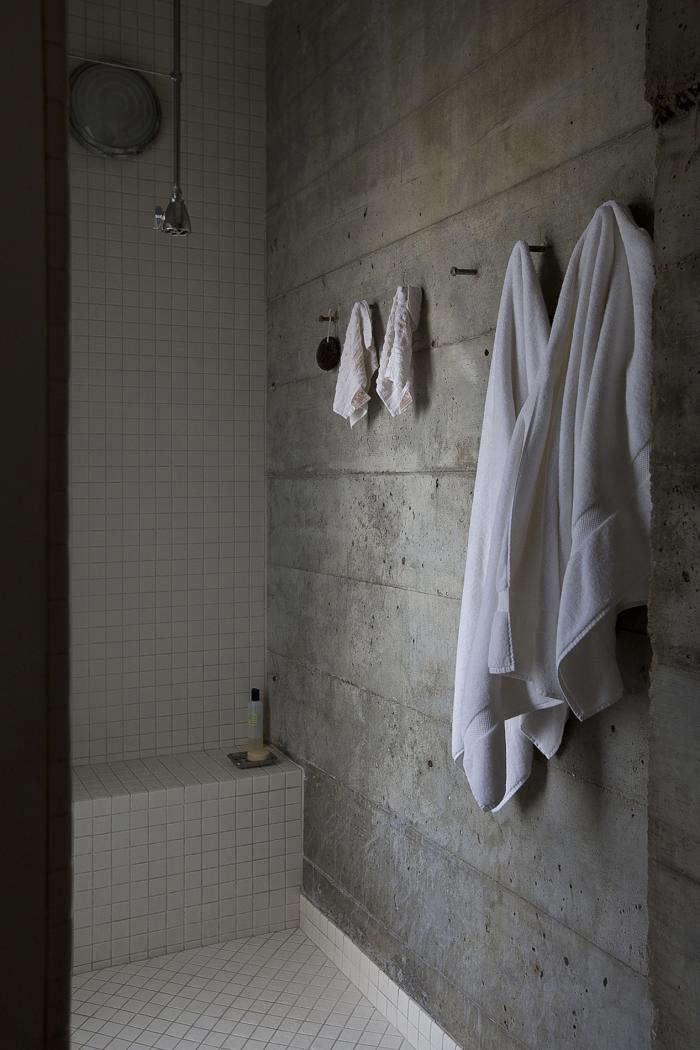 Above: Towels hang from large bolts embedded in the concrete, which function as hooks. Morla got the idea when she was given two bolts after doing some work for SFMOMA during its construction. 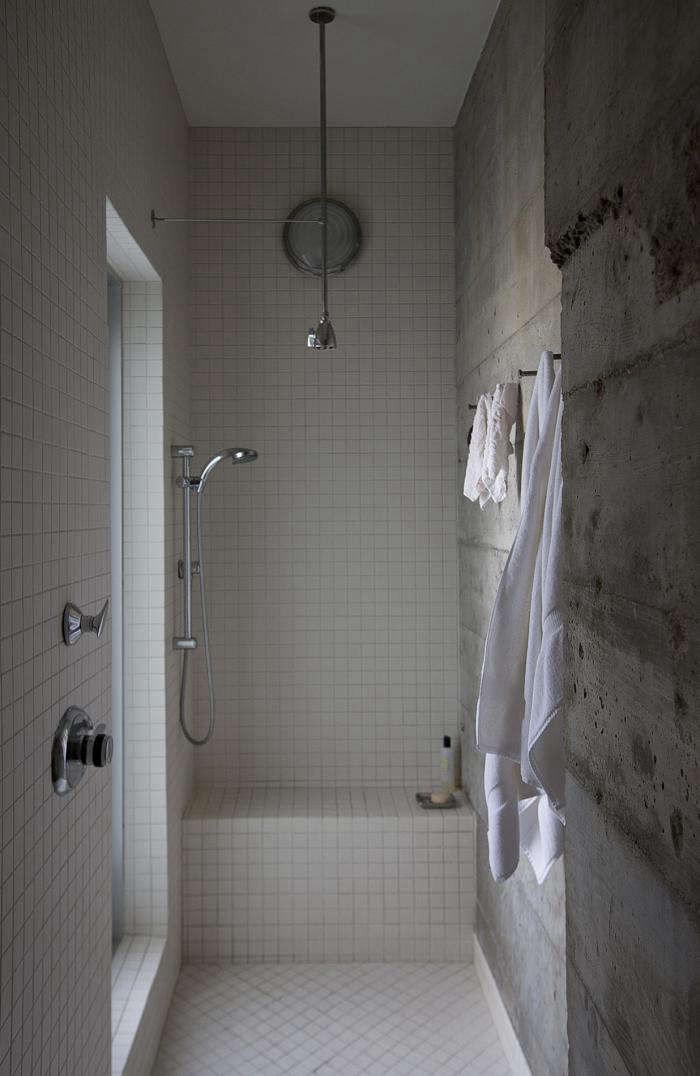 Above: A door in the shower leads to a hot tub on the deck.

Above: Aluminum framed floor-to-ceiling windows and door lead to a deck outside. The couple used Blomberg windows throughout the house. The canvas duck curtains were custom made. 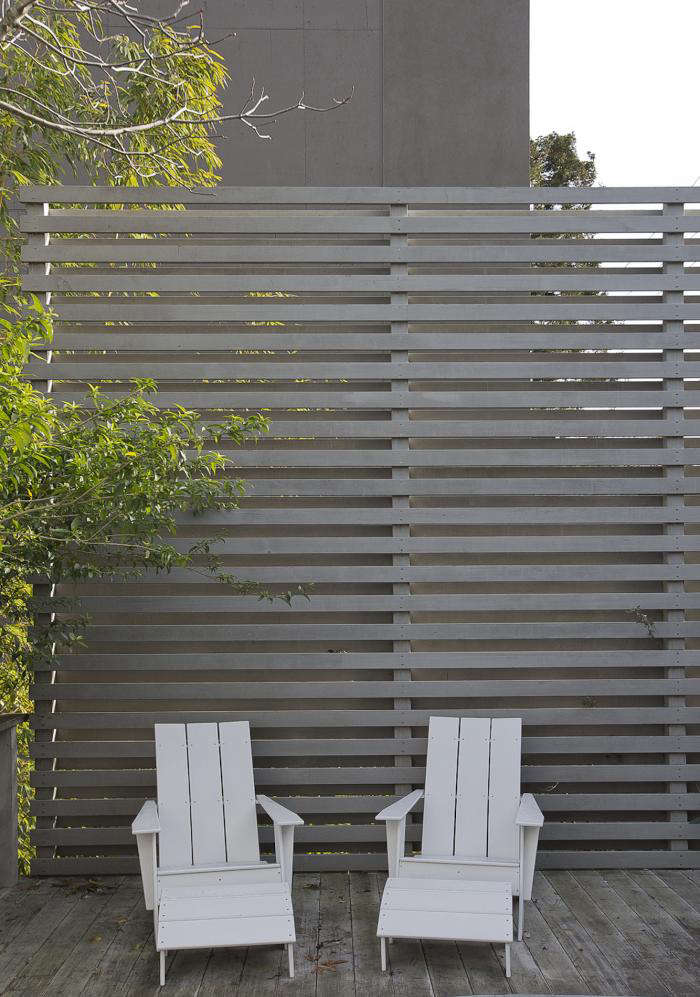 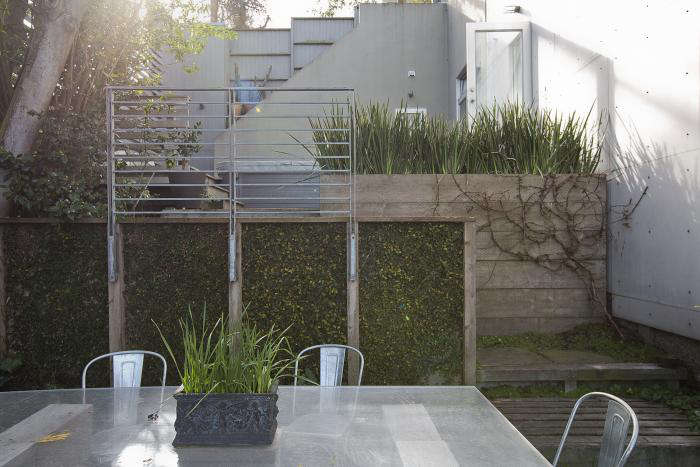 Above: The outdoor dining table sits below the hot tub. The double lot allows for plenty of decking and outdoor garden space. 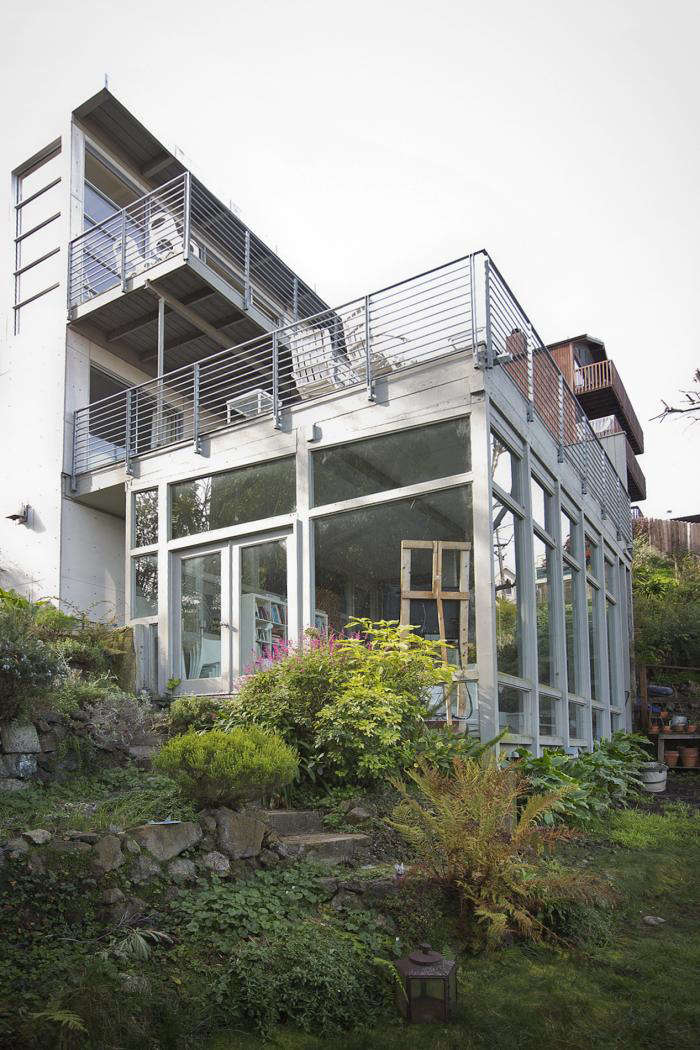 Above: Morla's art studio is housed beneath the deck off the children's bedrooms and doubles as a hangout for her teen children and their friends. When they first cleared the lot to create a garden, instead of having the rocks taken out and thrown away, de Matran incorporated them into the garden (several of the laborers working on the project were skilled in masonry and were able to lay beautiful stone work steps and walls).

For more on de Matran's work, check out our Architect Directory or watch him in an interview on Conversations with Design Innovators.