A prop stylist and a skateboard designer are unlikely business partners.

But for Portland, Oregon, couple Jen and John Vitale, who have just launched their own online shop, Association, embracing varied interdisciplinary passions is all in a day’s work. “I enjoy being married to someone who does something completely different from what I do,” explains Jen. “It keeps me inspired and thinking about the ways I can approach styling and make it unique to what is currently out there. At the same time, I think my background has definitely influenced the way John curates The Killing Floor, his skateboard brand.“ 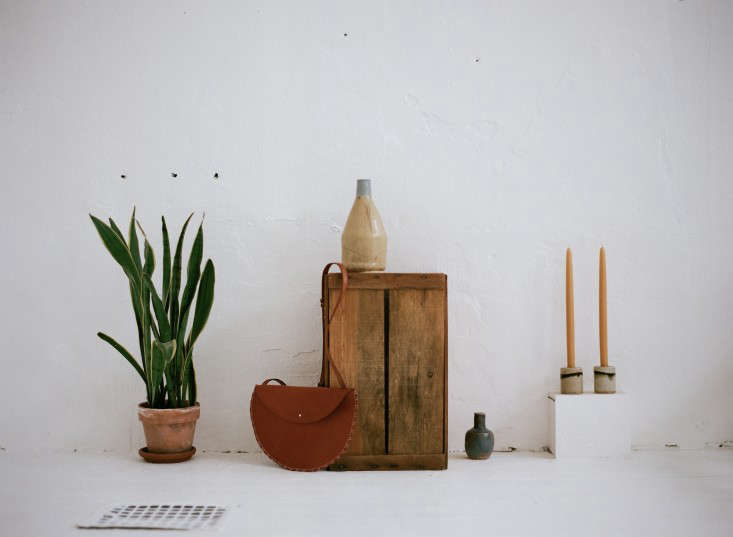 Association offers a small selection of new, vintage, and special-edition housewares, accessories, and objects. There are goods from designers Jen and John admire, things made by friends, and offerings created or found by John and Jen themselves. As they say, the shop is “a reflection of a shared appreciation for living an intentional lifestyle.” The couple moved to Portland from coastal Northern California in 2012, and Jen notes that the laid-back attitude of the West Coast “definitely influences our aesthetic and overall mentality.” For evidence, see their shop category titled “Vibes.”

We recently had a chat with Jen and John about their thrifting techniques, prop styling, skateboards, and the current Portland look. 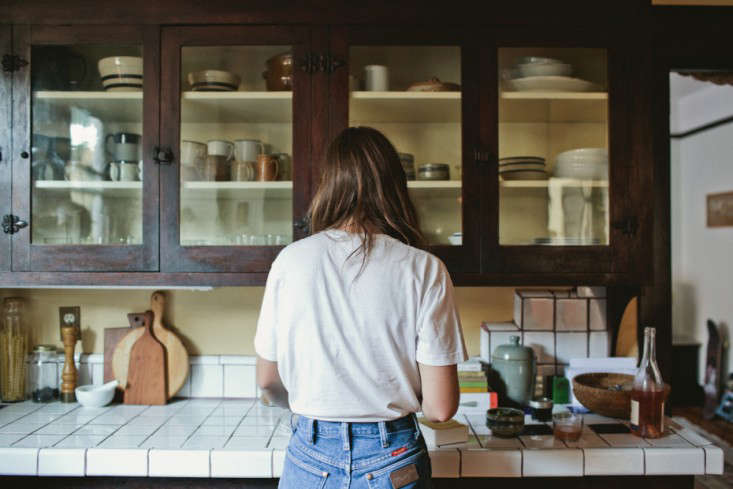 Above: Jen in her kitchen photographed by Carissa and Andrew Gallo for Freunde von Freunden.

Remodelista: Jen, you’re an obsessive thrift store shopper. What is your best score ever?
Jen Vitale: I don’t know if I’ll ever find something and say, “This is my best score ever! This is it.” That’s because there will always be another gem hidden in a Goodwill somewhere waiting for me to unearth it. I will say that I purchased a small pair of vintage wooden oxen a few years back–they’re some sort of folk art piece and they remind me of New Mexico, one of my favorite places. Honestly. though, I have no idea what possessed me to buy them and I don’t quite know why I love them so much. 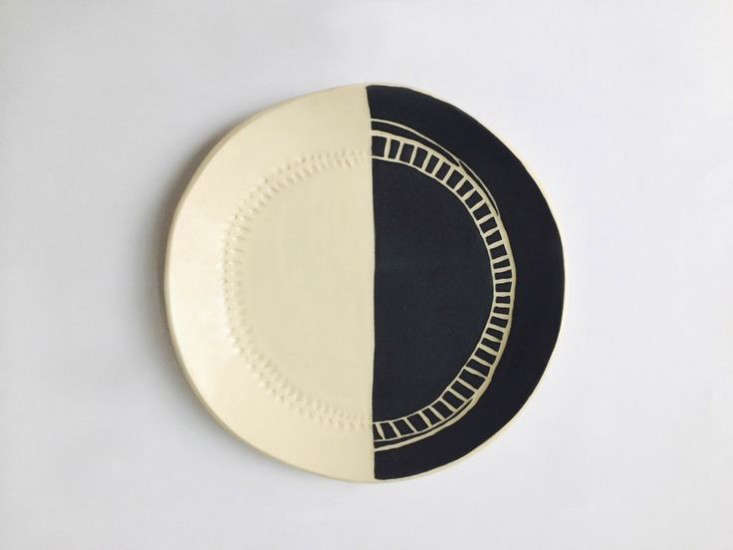 Above: From Portland, Oregon, artist Natalie Busch, the Clover Ceramic Plate is one of a collection of her hand-etched and painted one-of-a-kind pieces sold through Association; $24.

RM: Can you offer some advice for those of us who are less patient in thrift stores and flea markets? What’s the best plan of attack?
Jen: Don’t ever go looking for something in particular–you’ll never find it. I almost always make my best scores on days when I have no agenda other than to just browse. Also, choose pieces that you can mix with what you already have (whether in your wardrobe or in your kitchen). Don’t buy something that is going to look dated when you bring it home; err on the side of classics and inspirational objects. 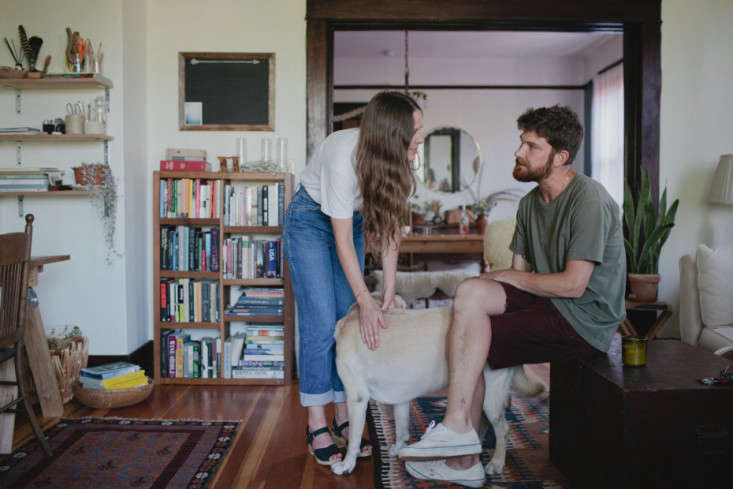 Above: More on the couple and their home can be found in an interview by Julie Pointer on Freunde von Freunden.

RM: What is an object you wish you had bought when you had the chance?
Jen: Not sure if this counts, but recently I was at the plant nursery and fell in love with the most amazing cactus that must have been about eight feet tall. I regret not splurging on it, because it was truly exceptional and I’ve caught myself thinking about it all the time.
John: That’s an easy one. There was this artist, Mati Klarwein, whose work was used on a lot of album cover art in the 60s and 70s. One of his most recognized albums was Miles Davis’ Bitches Brew, which has had a pretty heavy impact on me–the album itself as well as the cover art. The skateboard brand, Western Edition, did a collaboration with Klarwein and released a four-skateboard series with the artwork. I didn’t buy them when I had the chance, and I’m still kicking myself about it. 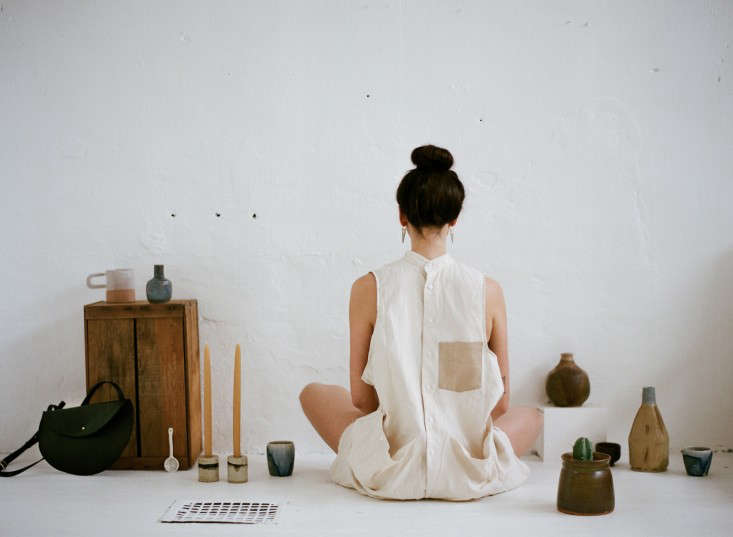 Above: A lookbook image from Association displays an array of the shop’s goods, including, the Farrell and Co. Semi Circle Bag ($165), a pair of vintage Ceramic Candle Holders ($34), a vintage Bottleneck Vase (far R, $40), and, on the model, the State Smock in Buttercream ($90).

RM: Tell us about the influence of Portland, and the whole Portlandia thing. How do you find your own voice amid the noise?
Jen: While we both make things, we try not to over-identify with one group or style; that’s when we get stuck creatively. We’ve always had an appreciation for outsider art and that kind of creative energy (the skateboarding culture naturally has this aspect, which resonates with both John and me). We do have a tendency to run in the opposite direction when everyone starts to do the same thing. Portland is definitely having a moment, and while it’s inspiring to live in a city going through this process, it’s also challenging to keep evolving and avoid getting too caught up in it. 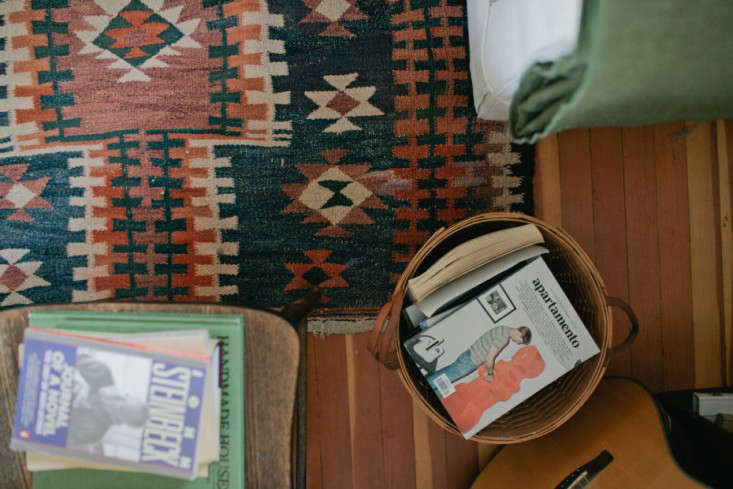 Above: A detail of the couple’s antique Navajo rug photographed by Carissa and Andrew Gallo for Freunde von Freunden.

RM: What is your favorite object in your own home and what’s the story behind it?
Jen: I think it’s our living room rug: a Navajo textile found in California. We bought it six years ago for a ridiculously low price that we still can’t believe it was being sold for. It was one of the first pieces we bought together and we’ve taken it everywhere since. At one point, it came with us when we lived in a closet-sized apartment in New York City. The place was so small that we couldn’t have much furniture so we just centered everything around the rug. 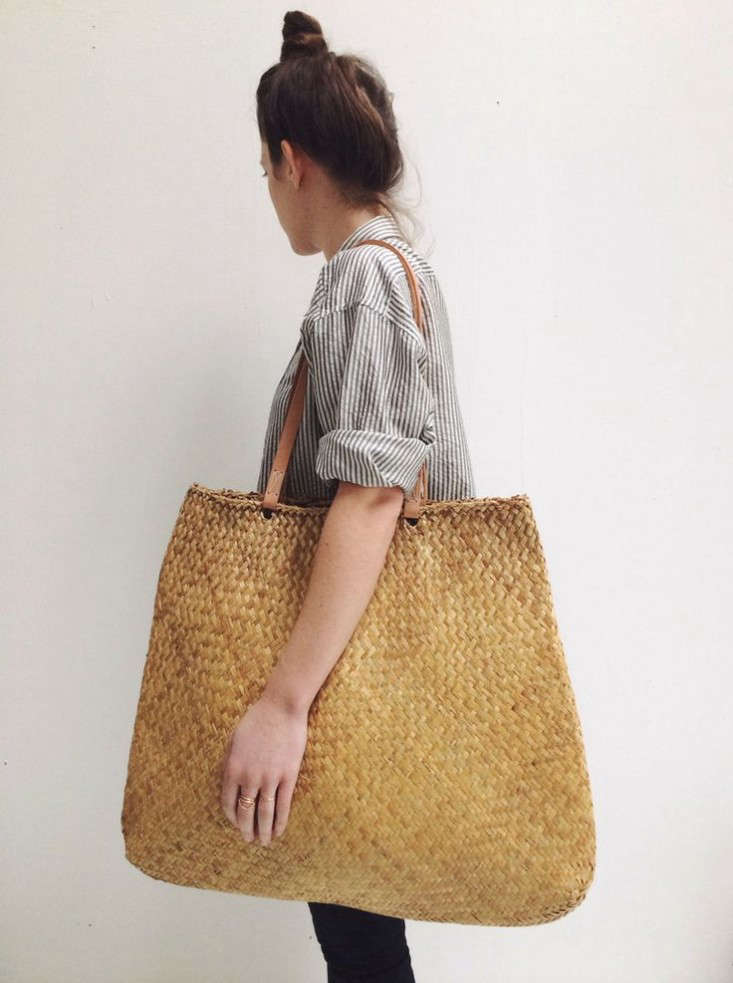 Above: The Oversized Basket Tote is an example of a thrift find available at Association; John and Jen updated it with new vegetable-tanned leather handles.

RM: Jen, tell us something we don’t know about styling.
Jen: You cannot get sparklers anywhere in Los Angeles in January, but you can have sparklers shipped overnight from Upstate New York. These are the kinds of things I am ashamed to say I know as a stylist, but you have to have lots of tricks up your sleeve for last-minute shoots.

RM: John, tell us something we don’t know about skateboards.
John: A lot of people look at skateboarding as a sport. It is a physical actively, sure, but I see it as much more of an art form. There are countless approaches to skateboarding, and, essentially, it’s a mode of creative self-expression. I think the more commercialized it becomes, the more the idea of it as just a sport becomes prevalent. What I’m really trying to do through The Killing Floor is to convey the more creative elements of skateboarding culture.

See more at Association. We have lots of favorite finds in Portland, Oregon, including The Woodsman Tavern, Quin Candy, and Spruce Apothecary; have a look at our Portland City Guide. And check out the ultimate Portland nursery, roaming chickens included, on Gardenista.

A Classic Reimagined: The New T14 Chair from Tolix