If we were betting on the next breakout star in design, we’d put some money on Workstead.

The young firm, based in Brooklyn, has a combined background that includes theatre set design, music, and art, along with formal training in architecture at RISD (where the two principals, Robert Highsmith and Stefanie Brechbuehler, met). Workstead recently joined the Remodelista Architect/Design Directory, and we were thrilled to see more of their inspiring interiors, which they design down to the lighting, furniture, and hardware.

The two launched the company in 2009 and have since been joined by right-hand man Ryan Mahoney. Until recently, they worked out of Highsmith and Brechbuehler’s apartment, the parlor floor of an 1880s Brooklyn brownstone in Cobble Hill. “We used it a laboratory, and having the office in our home fostered the way that we think–it’s a more intuitive way of making things,” says Highsmith.

Photography by Matthew Williams (except where noted). 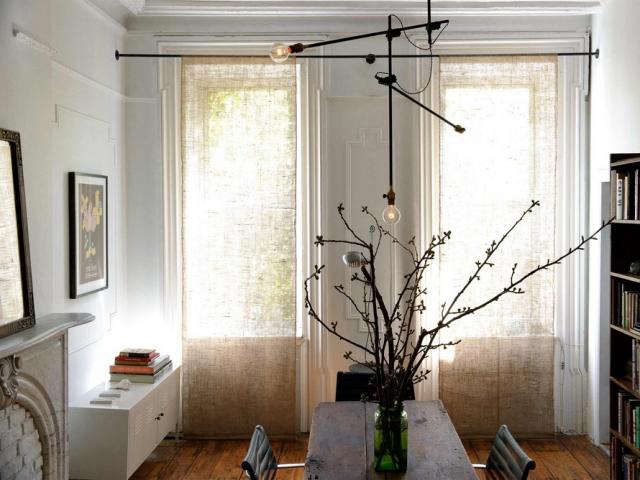 Above: A dining room ceiling fixture turned into the prototype for the firm’s 3-Arm Industrial Chandelier. “The junction box in the living room ceiling wasn’t centered, which was driving us crazy,” says Highsmith. “We developed this light so it could re-center itself based on what else was going on in the room. It’s super-flexible and reconfigurable–it make sense for people in New York who move from apartment to apartment.” 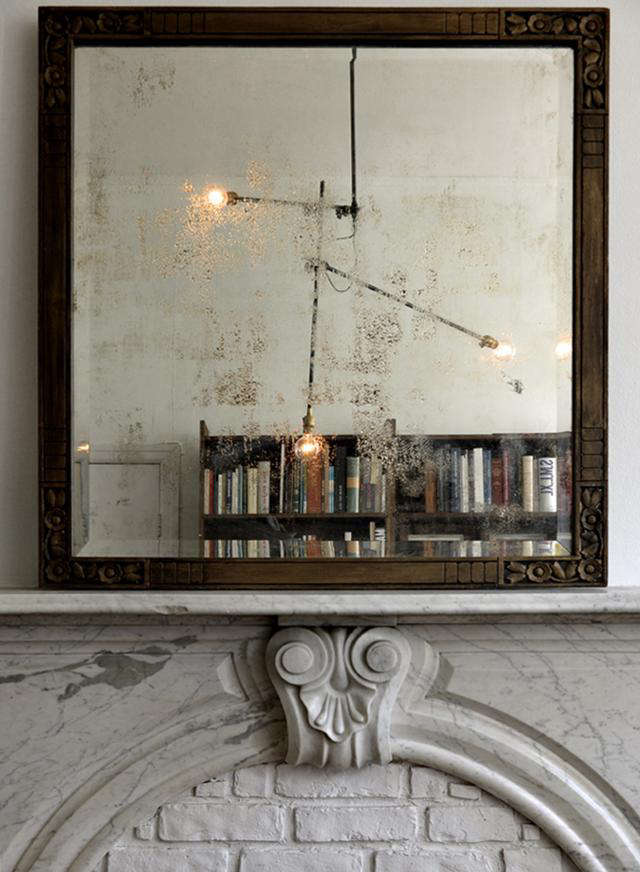 Above: The mirror once belonged to Highsmith’s grandmother. “We believe in holding on to objects that will last a long time and acquiring things carefully,” he says. “In our designs, we like to use time-tested materials in a slightly more modern way.” 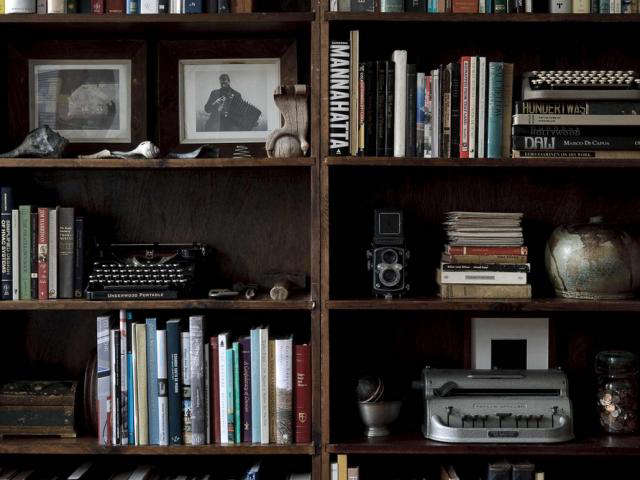 Above: The bookcases are salvaged built-ins from an old house that was being remodeled. 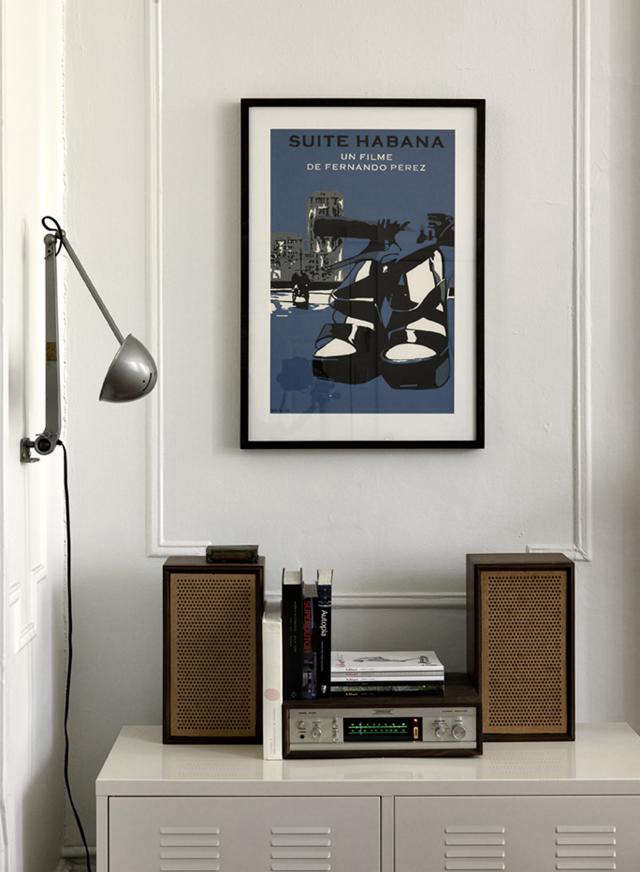 Above: A nook is lit with a vintage light from Dazor, a venerable American lighting company still in business today. “We are obsessed with these lights–there are four of them in the office,” says Highsmith. “Most of the light comes out the bottom of the shade, but there is a slice that lets a little bit of light out the other side.” The side table is IKEA’s PS Cabinet. 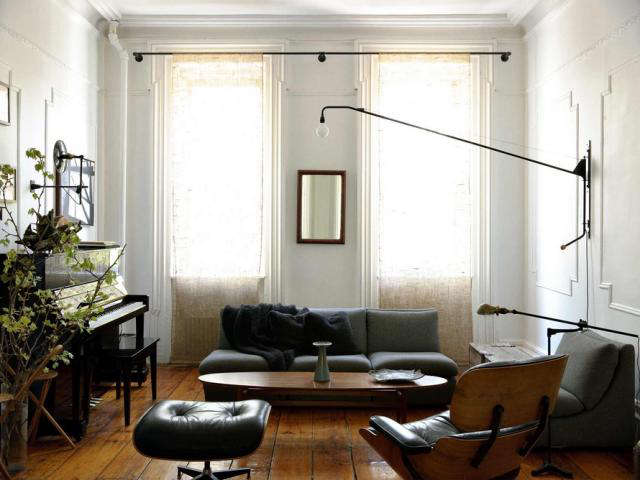 Above: In the living room, a Prouvé Potence light sits above a Workstead floor lamp. The curtains were made from $20 rolls of burlap, weighted by a wooden dowel on the bottom, and hung from plumbing rod hardware (steel pipes and flanges, painted black). “It’s an economical way to do window treatments,” says Highsmith. “They let light in while giving you a bit of screening from the street.” 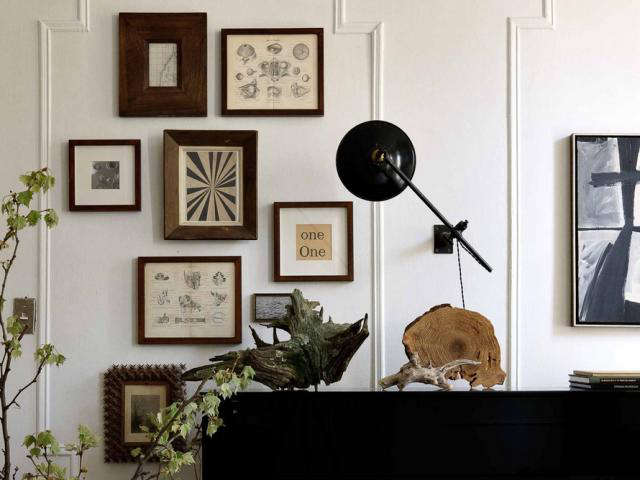 Above: Over the piano is a vintage light from O.C. White, another American manufacturer with a long history. 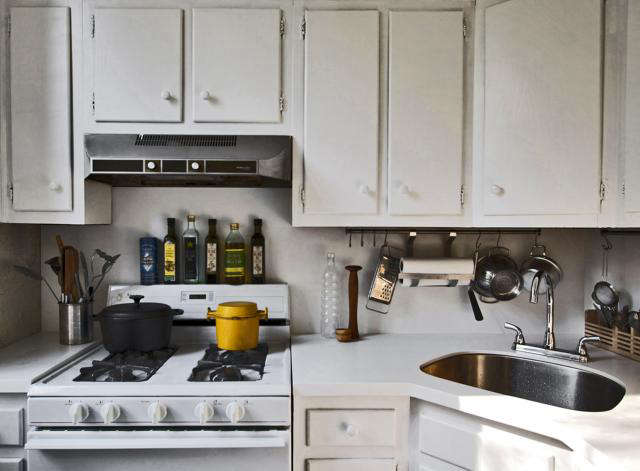 Above: The kitchen is tiny but functional; the yellow pot is by Danish designer Jens Quistgaard. Photograph courtesy of Workstead. 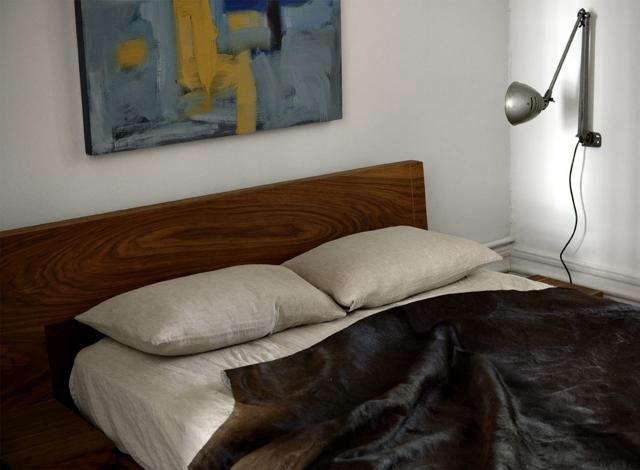 Above: A painting by Highsmith’s grandmother, Sammie Skinner, hangs in the master bedroom. The wall light is another vintage Dazor, and the bed covering is a cowhide from IKEA: “The bedroom is between the living room and the dining room, so we did what we could to make the bed look more like a daybed,” says Highsmith. 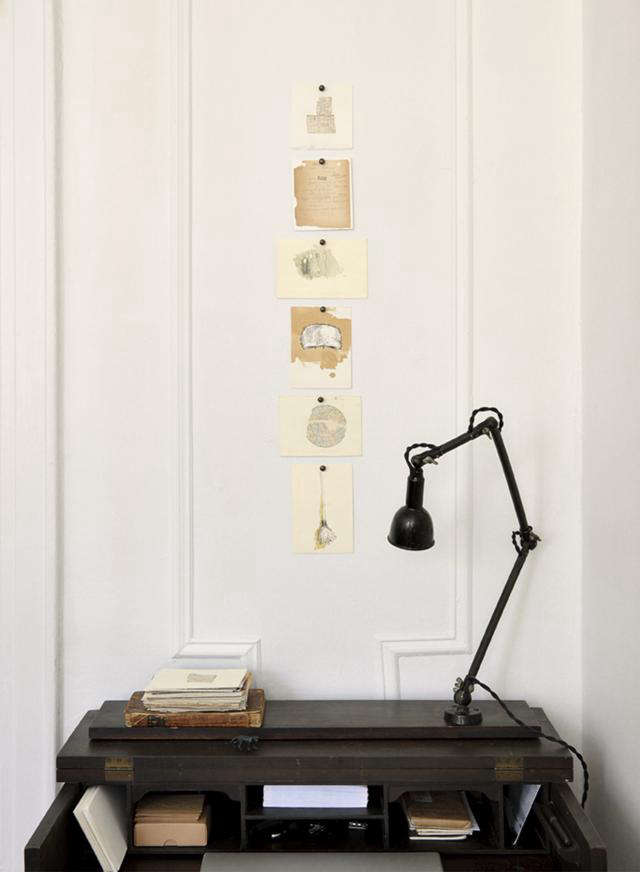 Above: A series of homemade postcards from friends is displayed over an old secretary that Highsmith rescued from his parents’ attic. The vintage lamp came from the Brimfield antiques market in Massachusetts. 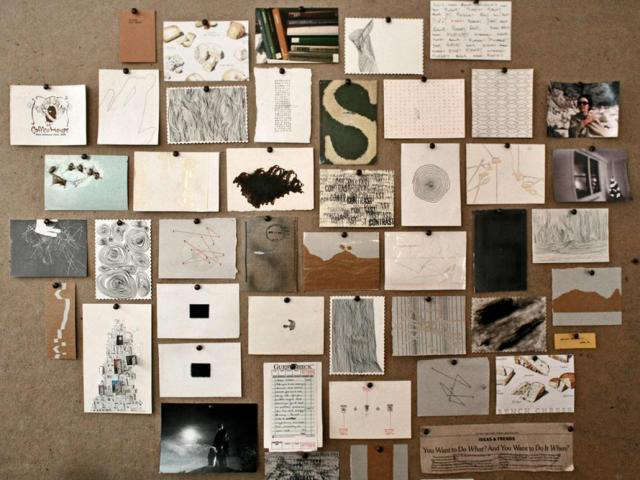 Above: Before they moved to Brooklyn and got married, Highsmith and Brechbuehler were living on opposite ends of the continent; they sent each other many postcards, hand-drawn and otherwise (the S is from a catalog of Ed Ruscha alphabet paintings). The display now hangs in the dining room. Photograph courtesy of Workstead.