Duncan Hannah has spent the last four decades time traveling; photographer Michael Mundy (of An Afternoon With…) captures him at home in his Upper West Side apartment.

Hannah lives much of his life in the past, riveted by the possibilities of exploring a vanished world—an imagined England, perhaps, recovering from the First World War and not yet able to comprehend a Second. His work captures that moment of possibility that occurs just as a good story gets underway: the ship setting sail, sunlight gleaming on a roadster's fender, the girl who waits for you in a doorway. And in the West 71st Street apartment where Hannah has lived and worked since 1977, a similarly evocative narrative unfolds.

Photographs by Michael Mundy of An Afternoon With… 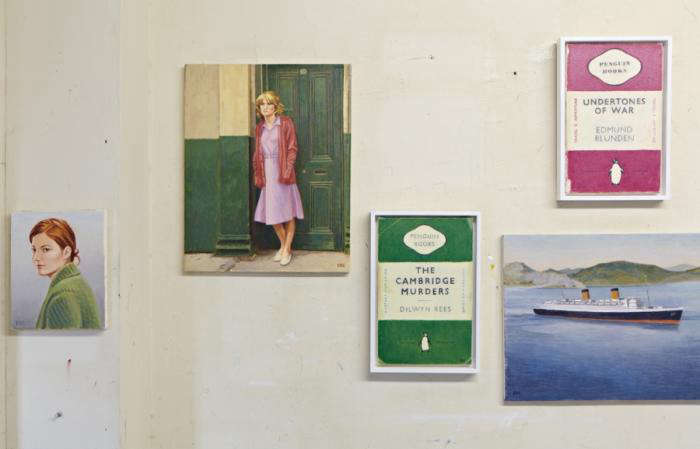 Above: A montage of Hannah's paintings. "I have a large collection of classic Penguin paperbacks, and they're so beautiful," he says. "I paint them with all their distressed-ness, and dog ears and rips. I must have done 80 or 90, and I started making some up, like Cautionary Tales by Duncan Hannah, a book I was going to write about my life and times. I only got so far as the cover." 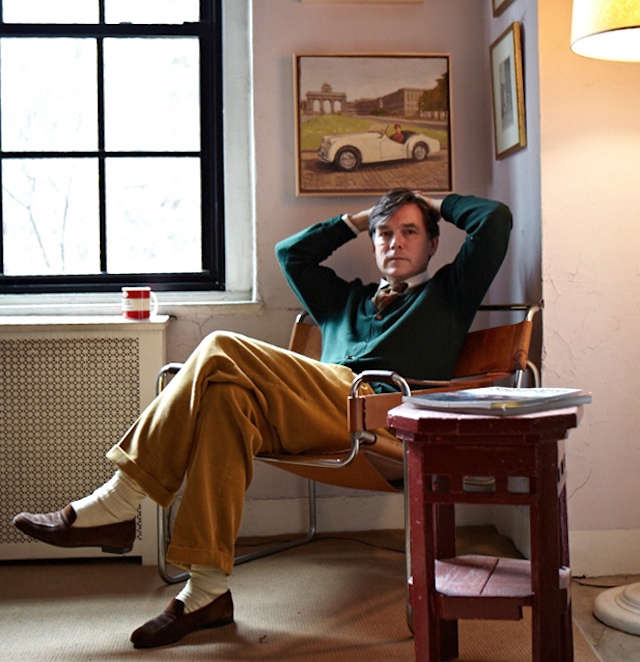 Above: Having grown up in Minneapolis, Hannah "can definitely see the St. Paul in F. Scott Fitzgerald; partly it's that yearning he had to be in the East." Hannah's Triumph in Brussels (Above) also reflects yearning: "It harkens back to when I was a kid in the 50's, and thought adulthood would mean having a gorgeous sports car and a redhead at your side." 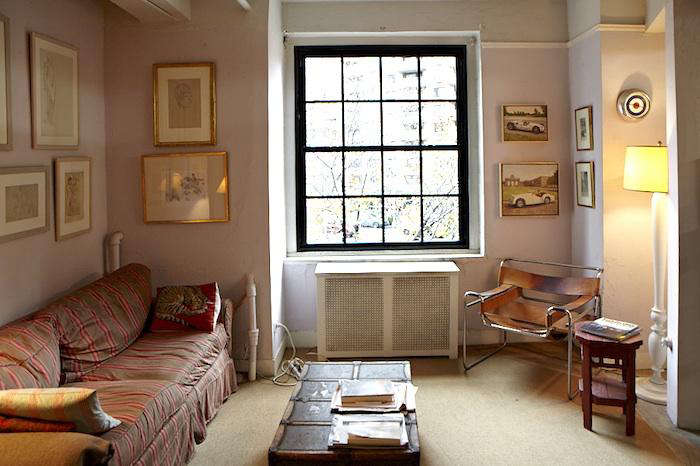 Above: "Sometimes I feel ghetto-ized by people who say, 'oh, it's nostalgia,'" Hannah says. "The way I paint, I suppose you could find in a painting from 1935. But I had to teach myself to paint that way. Once I realized there was a narrative impulse I wanted to explore, I slavishly studied paintings by dead painters to try to figure out how to do it." 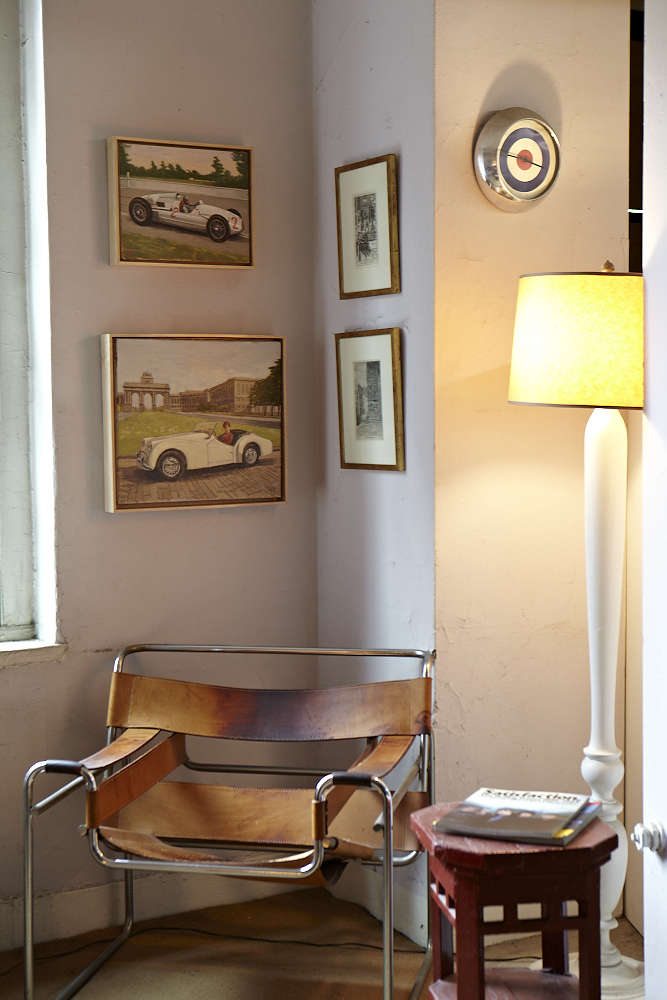 Above: Just as the 18th-century English painter George Stubbs was famous for his thoroughbreds, "I thought maybe I should paint a series of race cars," Hannah says. "Getting the gleam on the fenders was really fun." 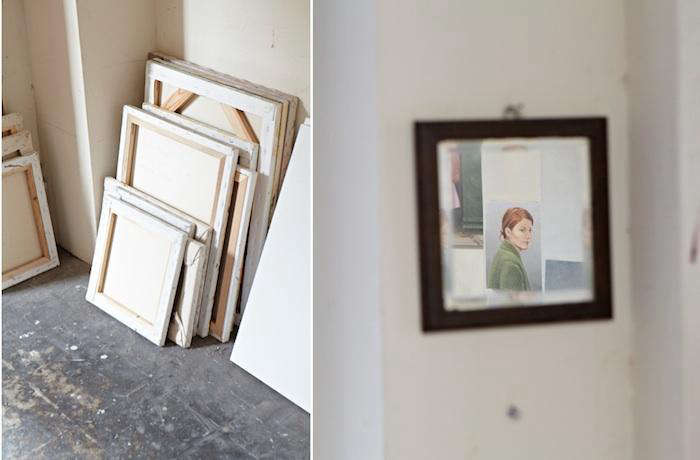 Above: Hannah describes his work as "a trip through other times, done in a rather straightforward style" that he arrived at after artist David Hockney told him, in the 1970s, to "take all the gimmicks out." 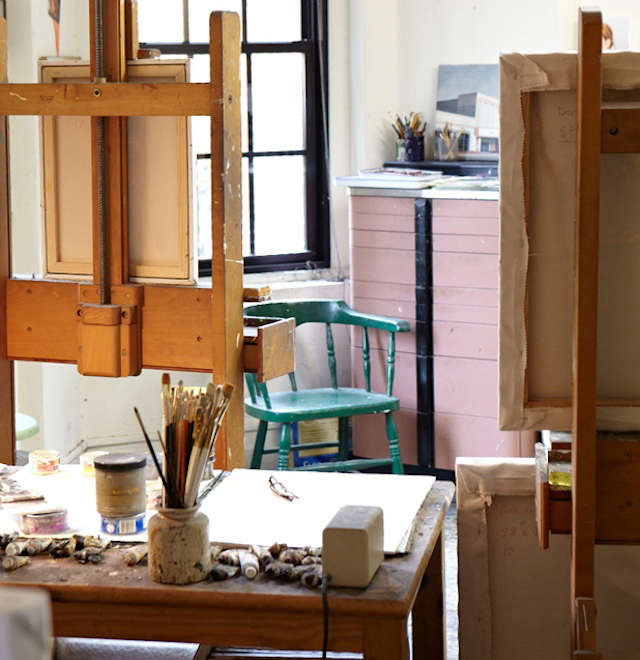 Above: Among the "gimmicks" Hannah abandoned: writing on paintings, and borders, and scribbly bits that were there to make a painting look jazzy. "Hockney said this was like putting your painting in quotes, and hedging your bets, instead of trusting your painting to itself," Hannah says. "He said, 'Forget about the zeitgeist.' " 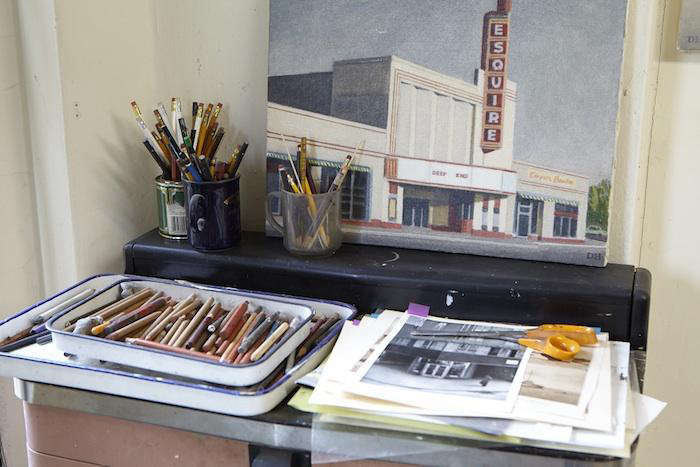 Above: "I was always an imaginative kid and I loved other eras, cultural history and art history and film history and biographies," Hannah says. "I always wanted to roam around in the 20th century, just as a novelist or a filmmaker might choose to dwell in the past." 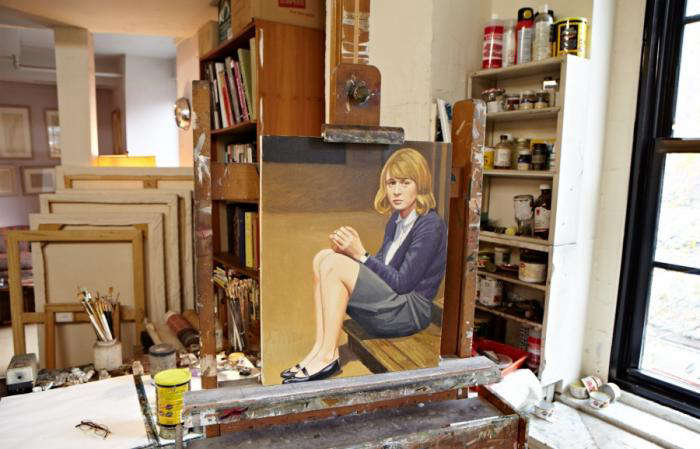 Above: In Upper Fifth, Hannah depicts actress Sarah Miles as she appeared in her film debut, with Laurence Olivier in Term of Trial. 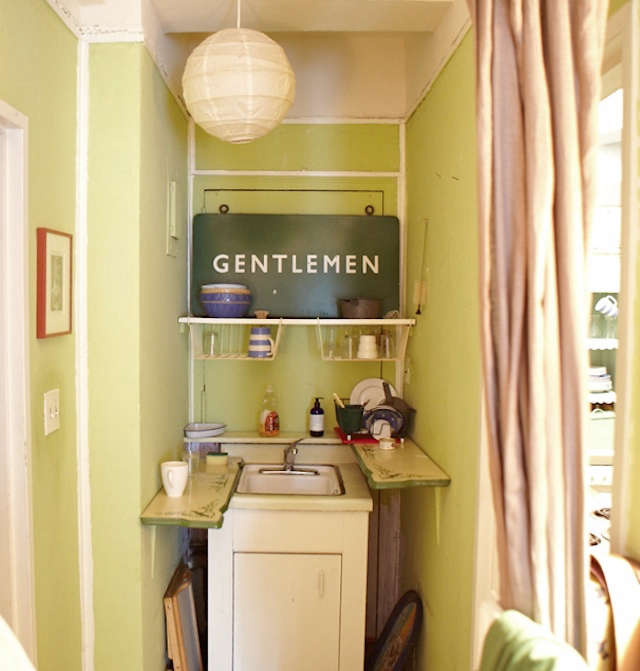 Above: When Hannah moved into his apartment, previously occupied by the Swedish Institute of Massage, the rent was $450 a month, but it had no kitchen. He installed a sink, along with a stove, and a refrigerator. "It did have a full bathroom, though, which was very useful," he says. 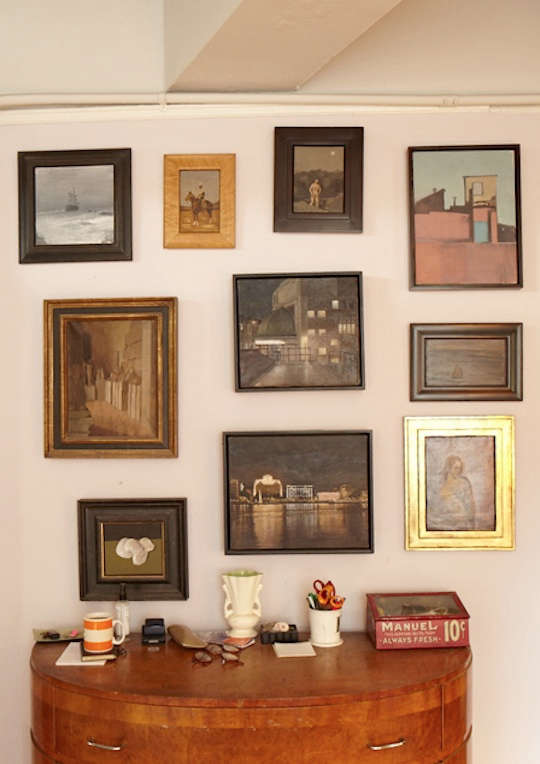 Above: Hannah's art collection includes works by old friends, antique store finds, and "swaps" with other painters. Rooftop (Above R) is by the visual artist Joe Brainard, who died of AIDS in 1994 and whose Collected Writings were published last month; the book is $21.94 at Amazon. 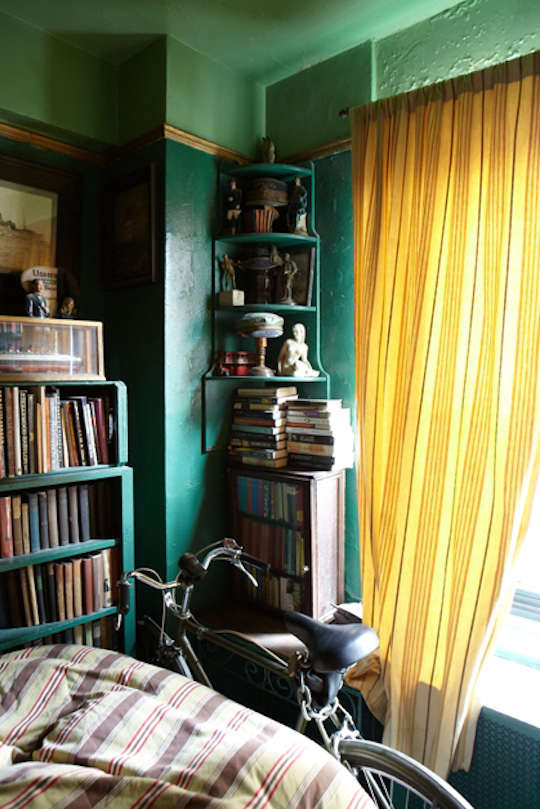 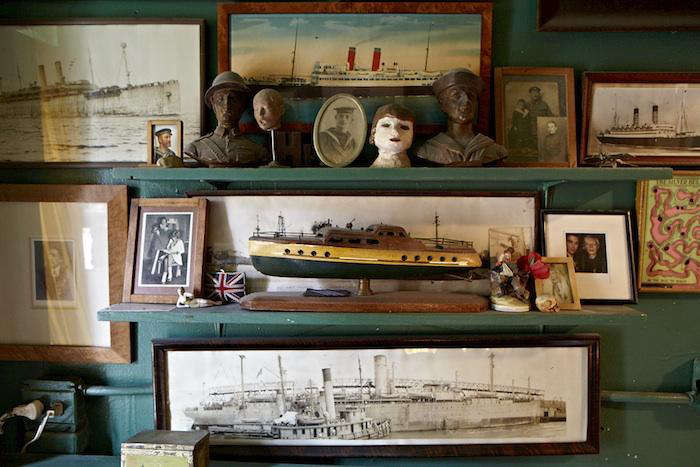 Above: The guest room is filled with juvenilia — wooden ships, and boys' adventure books, and a bicycle—and Hannah tells visitors: "If you fall asleep in this room, you'll have dreams of your childhood." 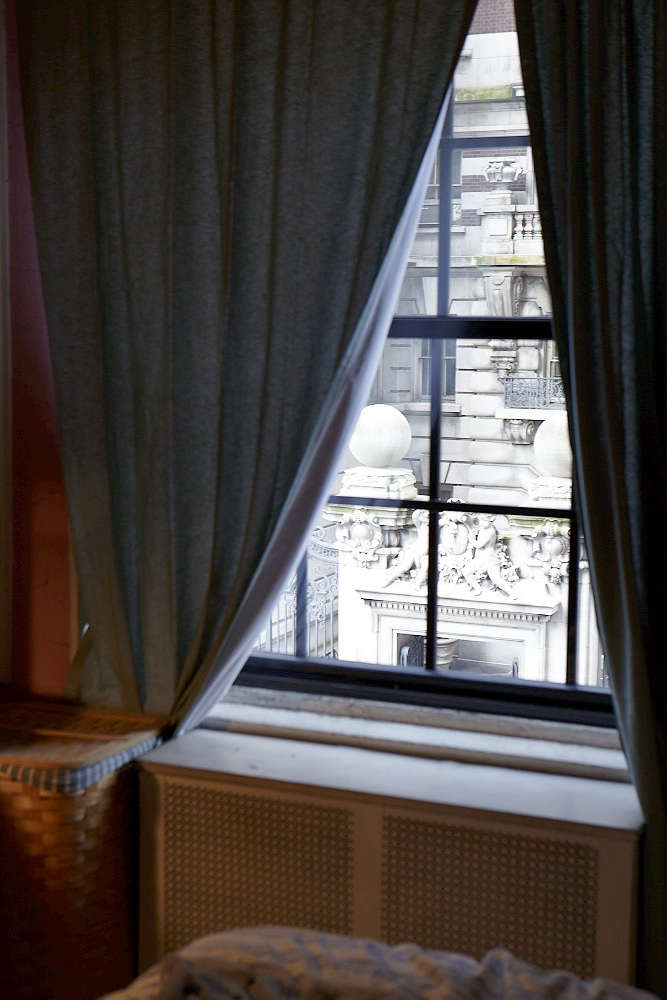 Above: The view from the master bedroom. Every morning Hannah wakes to the sight of two cherubs, above the door of the Beaux Arts Dorilton, holding a shield with a letter "D" on it. "It may be for Duncan," Hannah says. We have no doubt.

The Collected Writings of Joe Brainard