Air raids destroyed the old Moritzplatz shopping district during World War II; later the Berlin Wall hulked over the neighborhood. For decades, trash and rubble and graffiti looked right at home until, one day, a garden came along.

In the summer of 2009, a non-profit company called Nomadisch Grun—which translates to Nomadic Green—got a lease and started clearing garbage. Now an oasis, the Prinzessinnengarten is a popular destination in downtown Berlin, with its own coffee shop, toilets, and bar (all housed in recycled shipping containers), and a fanciful children’s playhouse built from metal and wood scraps. Fruits, vegetables, and flowers grow in portable containers; it all moves to an indoor market hall in the winter. Here’s what an entirely portable organic garden looks like:

Photographs via Prinzessinnengarten, except where noted. 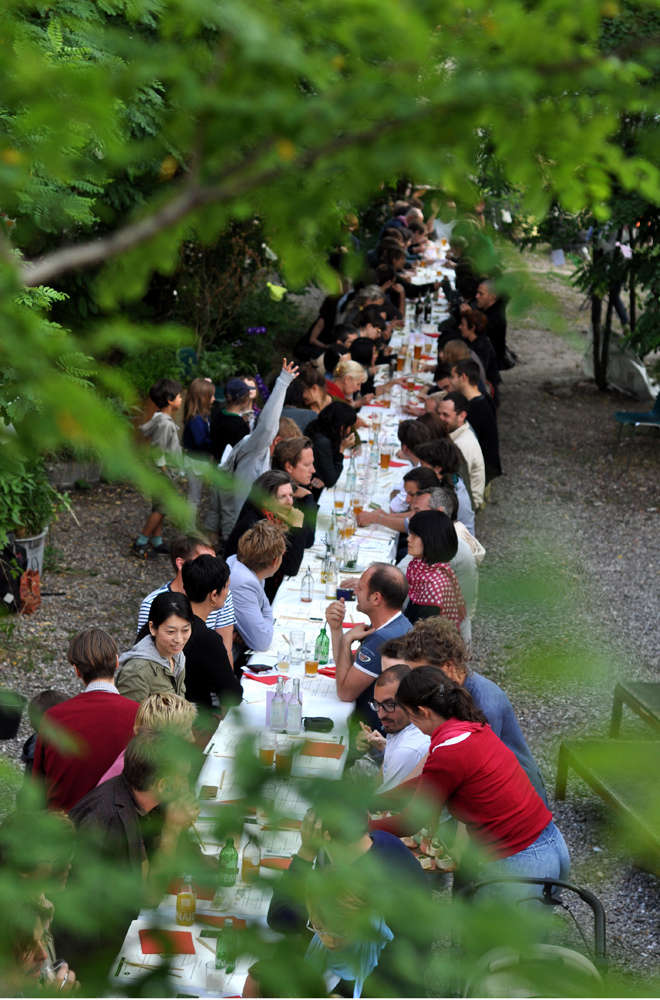 Above: On summer nights, community dinners; menus are decided by what’s in season.

Above: Filmmaker Robert Shaw got the idea for the garden in Cuba, where urban farmers create communities to grow food together. In Berlin, Shaw and co-founder Marco Clausen mobilized a cleanup effort at a bleak site. Image via Nuok.

Above: Each April, the 20,000-square-foot garden and its cafe officially open for the season.

Above: The produce is grown without artificial fertilizers or pesticides.

Above: Lettuces planted in compost, in shipping crates.

Above: in the garden: a wide variety of lettuces, 15 kinds of potatoes, 20 different varieties of tomatoes, and 3-inch-long beans from Africa. Image via Invisible Twinning.

Above: No need to be a member; the Prinzessinnengarten is open to the public. Many families spend the day together in the garden.

Above: One of the seven varieties of carrots grown in the garden.

Above: The cafe is housed in an abandoned shipping container. image via Stadsjord.

Above: On the lunch menu: hyper-local fruits and vegetables. Image by Katherine Tenneson, via Flickr.

Above: Strings of colored lights in the garden’s trees. Image by Katherine Tenneson, via Flickr.

Above: When the weather turns cold, the whole garden moves down the block for the winter.

Above: In the Markthalle, home during the winter, Prinzessinnengarten crops are for sale.

The Transformative Properties of Kolor

A Manor House and a Schoolhouse in the German Countryside