Designer Veronica Koltuniak was inspired by the aesthetics of two seemingly unrelated movies, The Royal Tenenbaums and Annie Hall, when she designed the interiors of Easy Tiger in Austin, Texas.

It makes sense, though, when you learn that Koltuniak was an LA set decorator in a former life (she also designed interiors for David Arquette and Courtney Cox, among others). For Easy Tiger, a brewpub and bakery, she created a mashup of Upper East Side tennis club aesthetics with Royal Tenenbaums eccentricity.

It adds up to a surprisingly cohesive setting for the brewpub/bakery, which is based on the unifying concept of yeast: beer and bread. Upstairs, there's a grab-and-go bakery offering French and Bavarian breads, while the downstairs pub and outdoor beer garden serve up traditional bratwursts, cured meats, and beer. Easy Tiger's motto is "Stay Awhile," and the combination of table tennis, beergarden, and bakery conspire to make you do just that. For menus and hours, visit Easy Tiger.

Photography via VeroKolt and Easy Tiger (except where noted). For more inspiration, see all our posts on beer garden tables and dining. 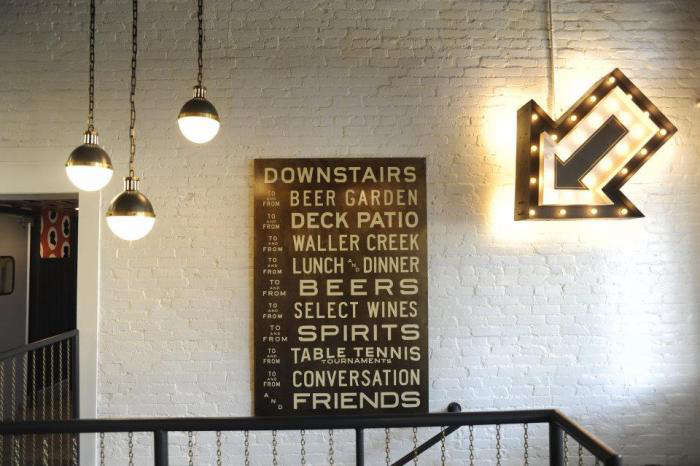 Above: A sign directs imbibers to the activities on offer, including table tennis tournaments. 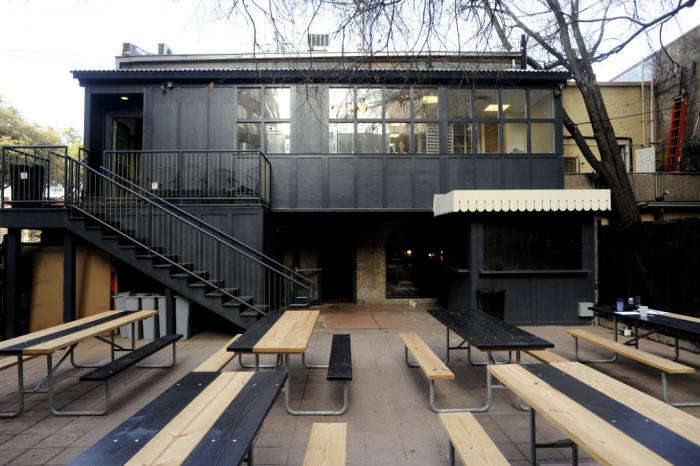 Above: Randomly painted picnic tables in the beer garden. Photograph via Austin Eater. 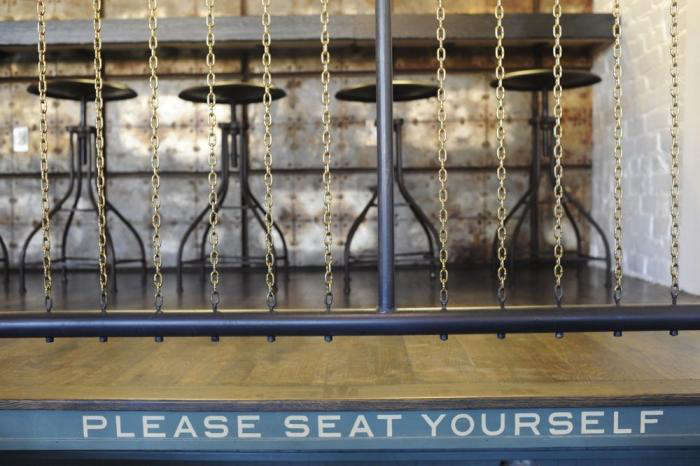 Above: Koltuniak paired up with graphic designer Ryan Rhodes on the signage. Photograph via Austin Eater. 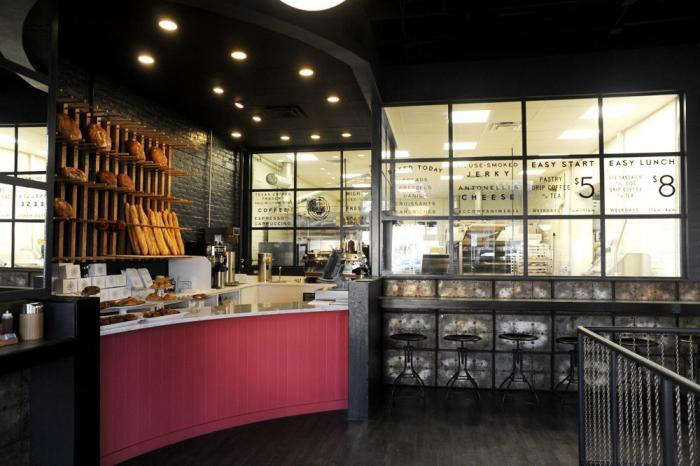 Above: Koltuniak used a deep French pink (a la Royal Tenenbaums) for the bakery counter. 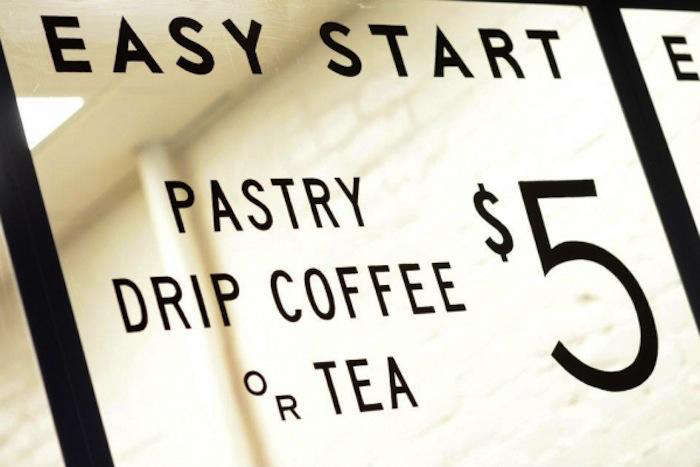 Above: The Easy Start on offer is a grab-and-go breakfast featuring drip coffee or tea and choice of pastry: pain au chocolat, almond croissant, or a spicy tiger claw. 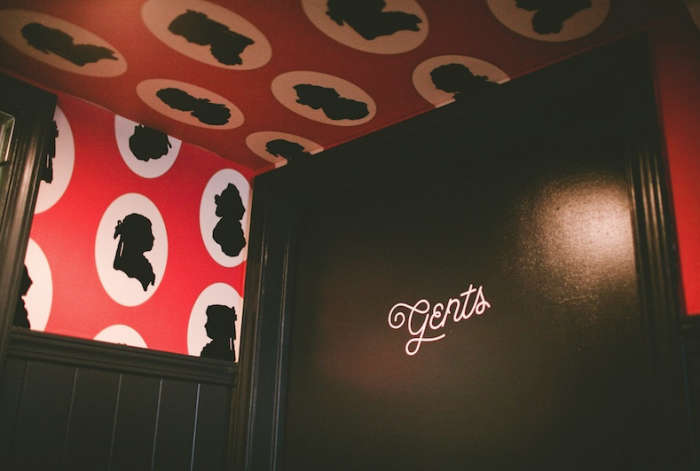 Above: A touch of Wes Anderson-inspired decor: a wallpaper of cameos against a French pink background. 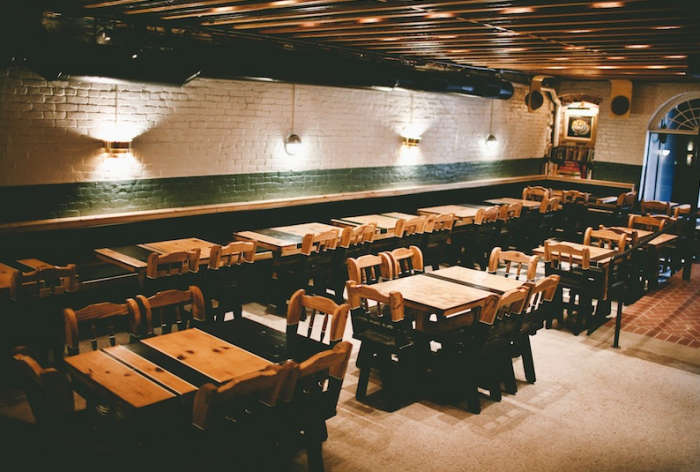 Above: Koltuniak utilized the Spanish colonial wooden chairs left behind by the previous owners, sandblasting them down to the grain and dip-dying them with a black stain. 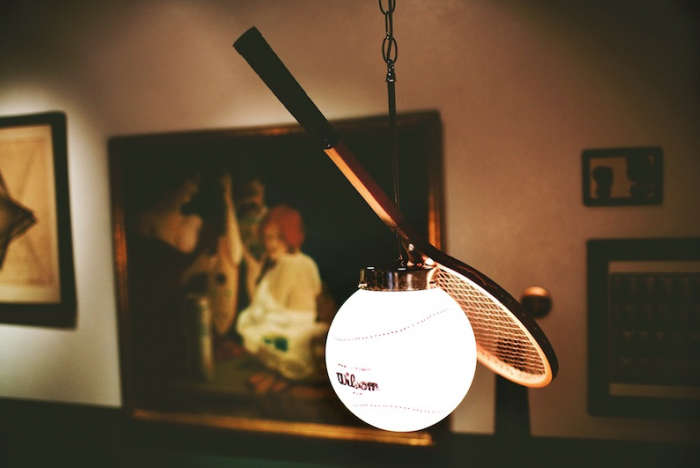 Above: Pendant lights are painted to resemble tennis balls; a vintage wooden racket acts as lampshade. 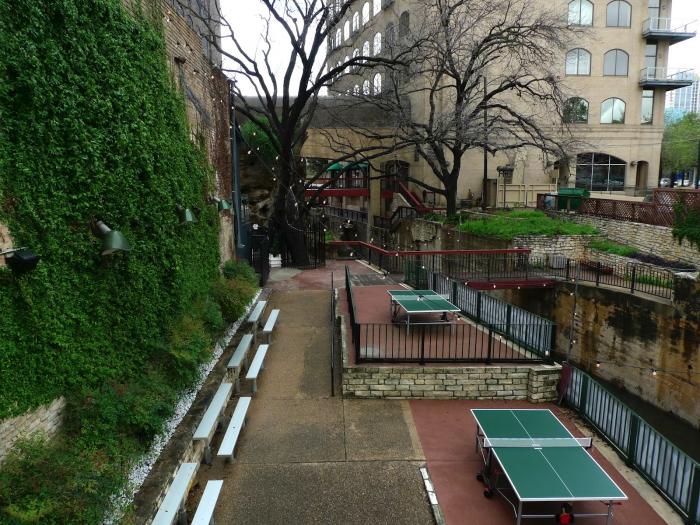 Above: Wild ivy pours over the building's side wall into the courtyard below. The two ping pong tables speak to the sports club atmosphere Koltuniak was looking to create. Photograph via Eat Pure. 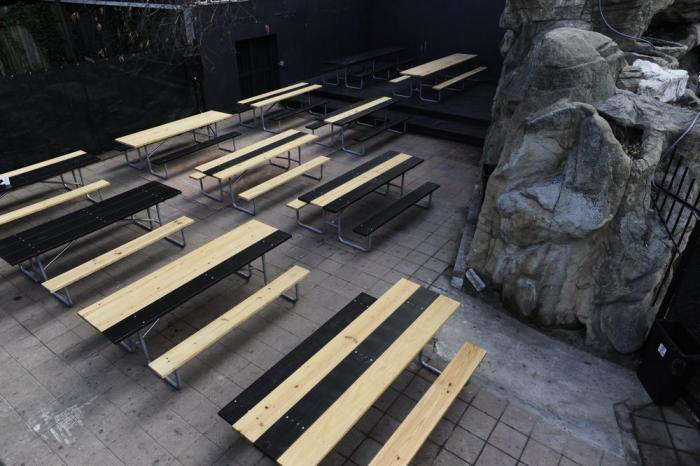 Above: A modernist take on the biergarten table, picnic tables are stained black in various patterns. Photograph via Austin Eater. 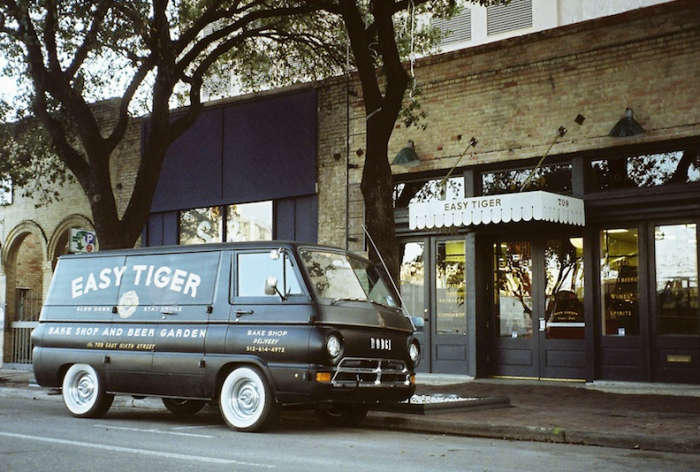 Above: An Easy Tiger delivery truck, parked in front of the restaurant, which is located at 709 East Sixth Street in Austin's Swedish Hill Historic District.

N.B.: Also inspired by Germany? See 148 images of German Design in our Gallery of rooms and spaces and 26 German shops, restaurants, and hotels in our City Guide.

In collaboration with: DIY: Extend the Season with Autumn Color