Our friend Jo Craven (a UK Vogue contributor) takes us on a tour inside Marianna Kennedy‘s kaleidoscopic world in Spitalfields, London.

Originally from Canada, Kennedy moved to Spitalfields 20 years ago, after she completed art school in Dublin. Over the past two decades, she’s applied her energies to renovating her 18th-century Huguenot silk weaver’s house back to how it was intended to be, using muted colors from Holkham Linseed Paints on the walls. As her friend Tash Aw says, “Everything here feels ancient but looks new.” Throughout the interiors of the four-story house–a combination live-work space and showroom–Kennedy’s own handmade lacquered tables, lamps, and mirrors appear like rainbow-hued quotation marks.

Kennedy’s heroine is midcentury Irish designer Eileen Grey: “She had just a few clients who were very particular,” she says. “Not many people work that way anymore.” Kennedy does, though. “We make things in small collections, and when they’re sold, they’re gone,” she says. 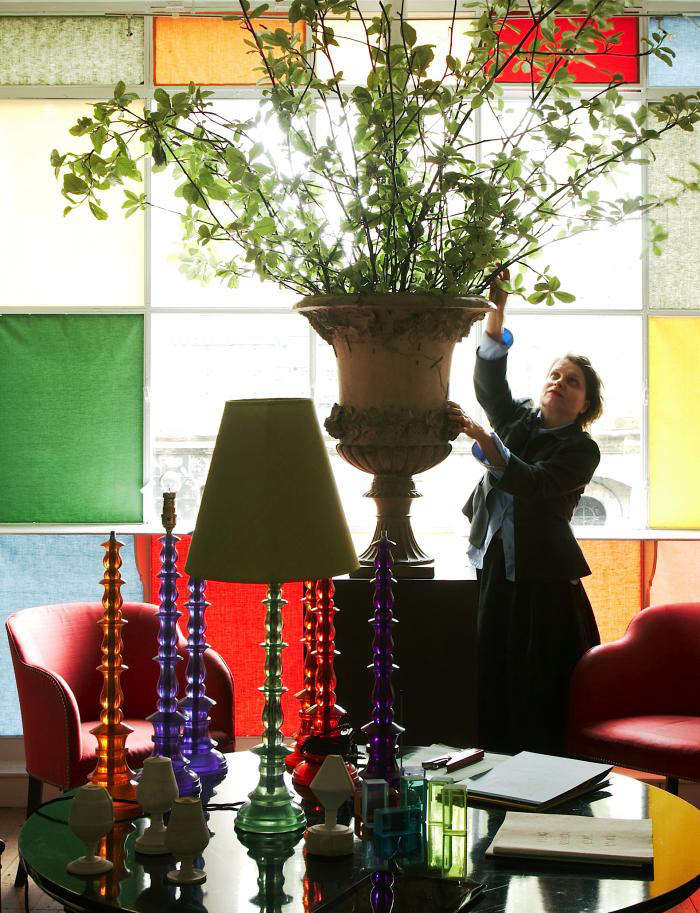 Above: Kennedy in her showroom. The window panes are covered in book cloth fabric from her husband Charles’s bookbinding business, which he operates on the top floor. 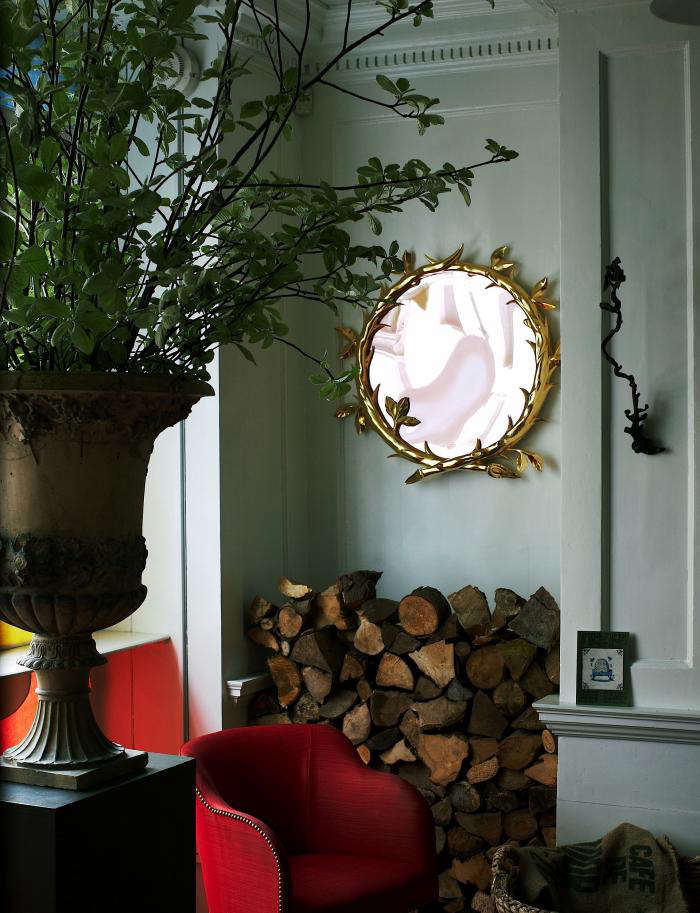 Above: Kennedy’s series of gilded mirrors is called Fetters of Gold. Made of platinum glass, which is colored, the frames can take up to a year to create. They are first hand carved of cherry wood after a drawing by Kennedy, and then gilded by Izzy Tennant, sister of supermodel Stella. Kennedy’s first collection was exhibited at the Galerie Chastel-Maréchal in Paris and sold out to private collectors. 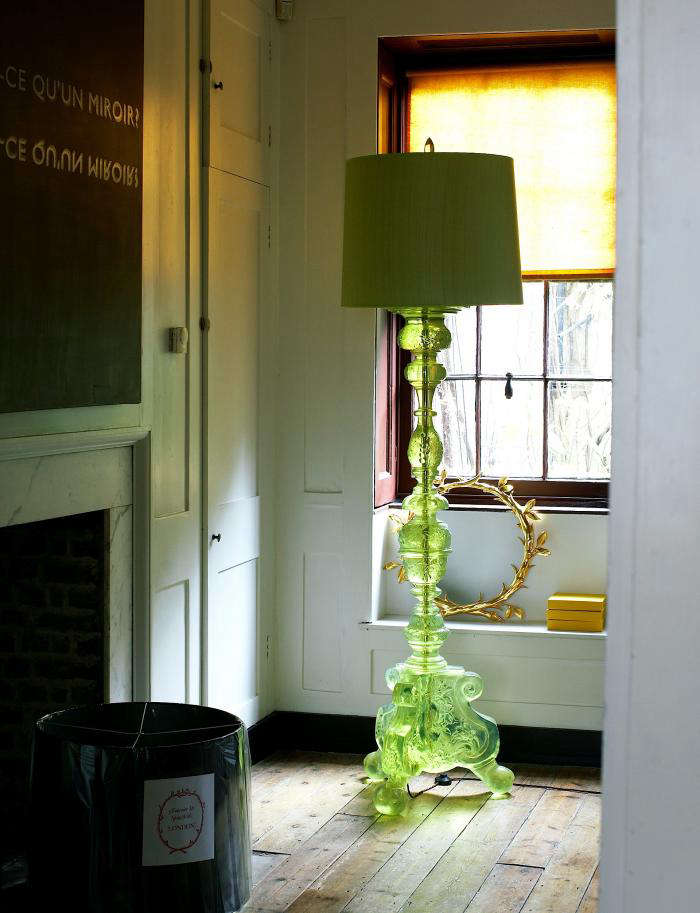 Above: The Cawdor Lamp (standing in front of yellow Book Cloth Blinds) has a story behind it: Kennedy counts Isabella Cawdor as one of her good friends and asked to borrow a lamp from the family castle in Scotland (yes, as in Shakespeare and Macbeth) to replicate in resin. 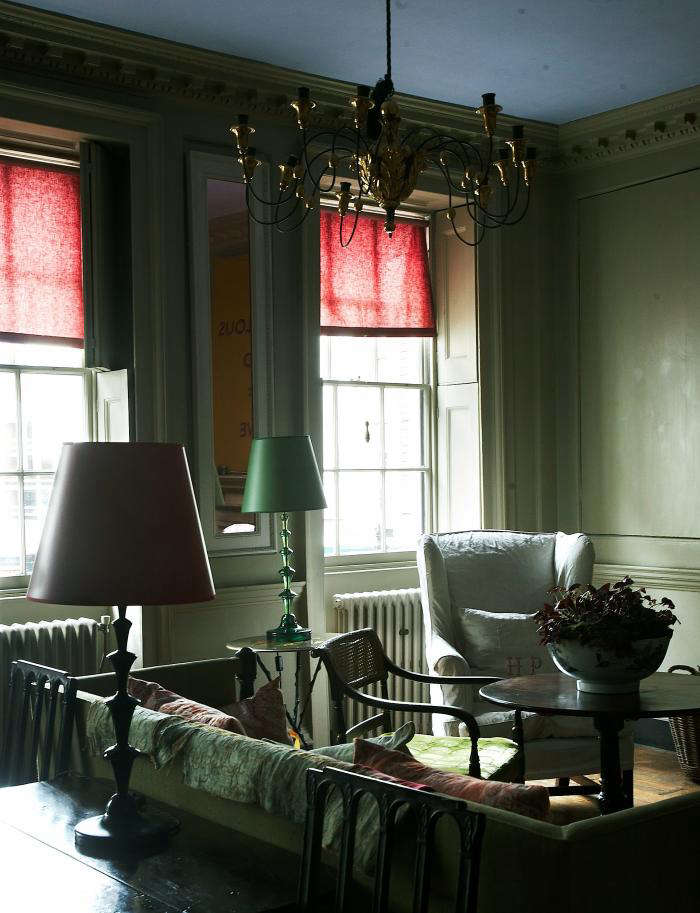 Above: Red Book Cloth Shades in the sitting room add warmth to the neutral tones. 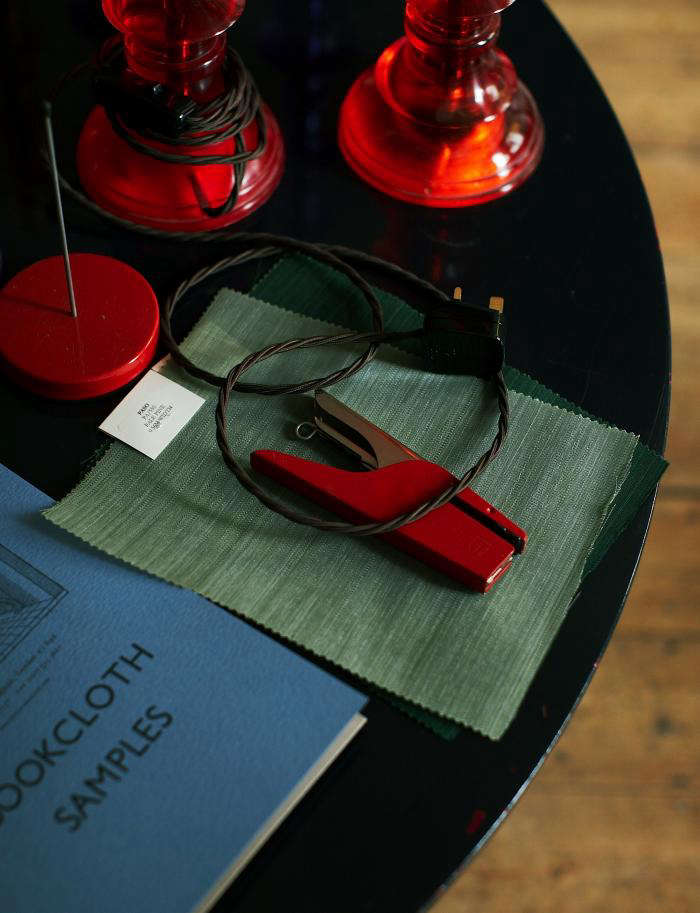 Above: The book cloth fabric Kennedy uses for her blinds. 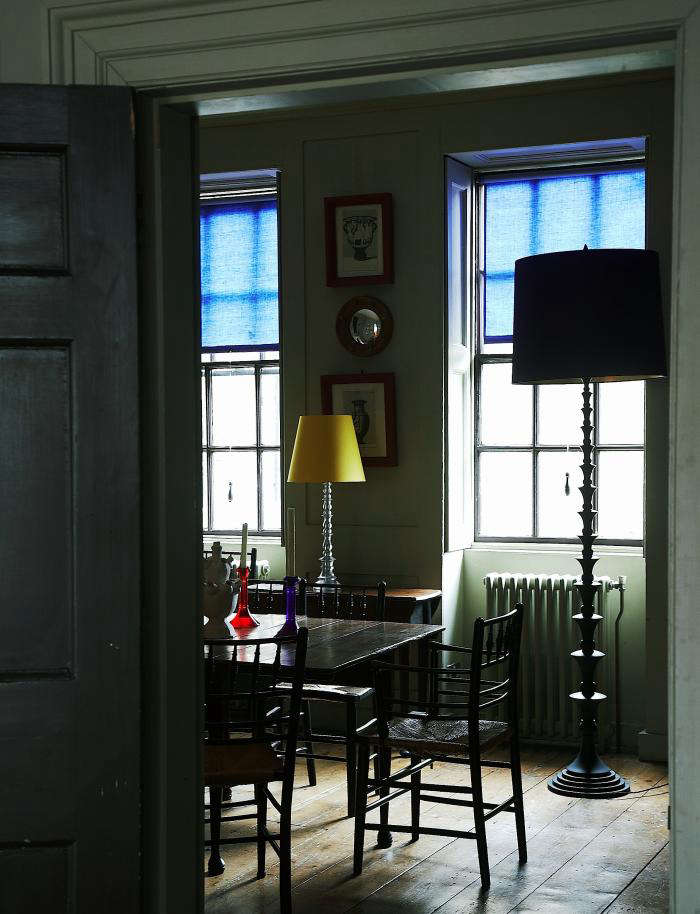 Above: Kennedy’s dining room is adorned with an assortment of her colored Resin Candlesticks and Lamps. In this room, she selected blue book cover fabric for her blinds. 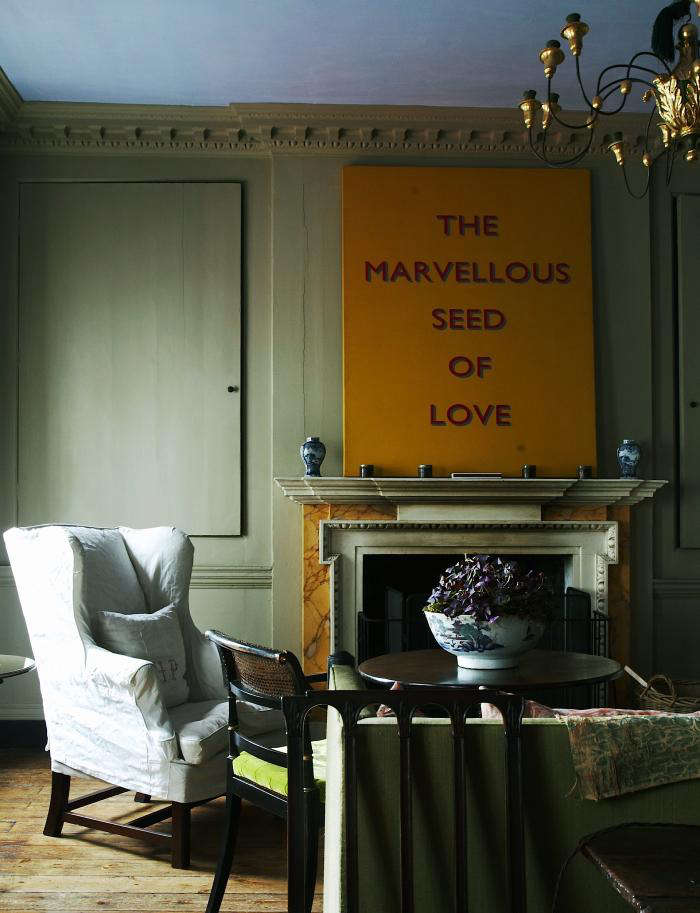 Above: In Kennedy’s sitting room, one of her own hand-painted signs hangs over the mantel. 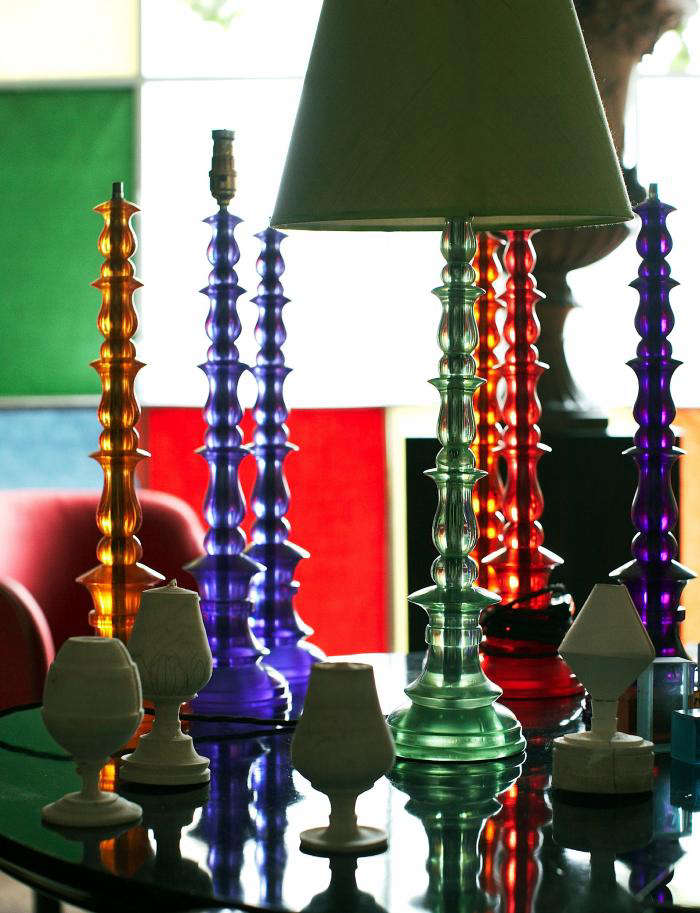 Above: Kennedy’s signature jewel-colored Resin Lamps and wood carvings gathered on one of her lacquered tables. The lamps are available at Ben Petreath for £495 ($768.41). 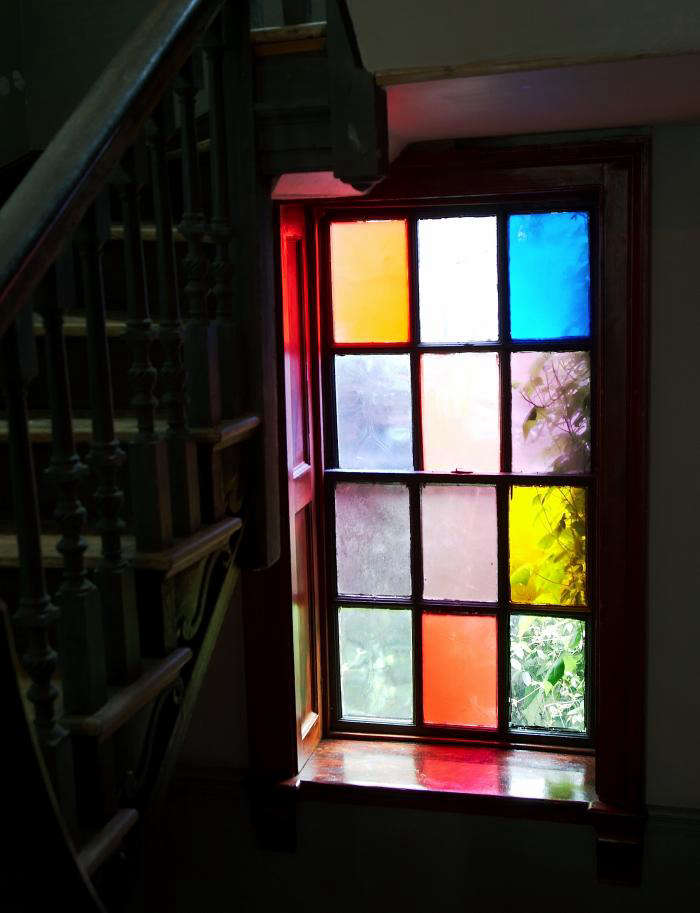 Above: Jewel-colored panes of glass light up a dark stairway. 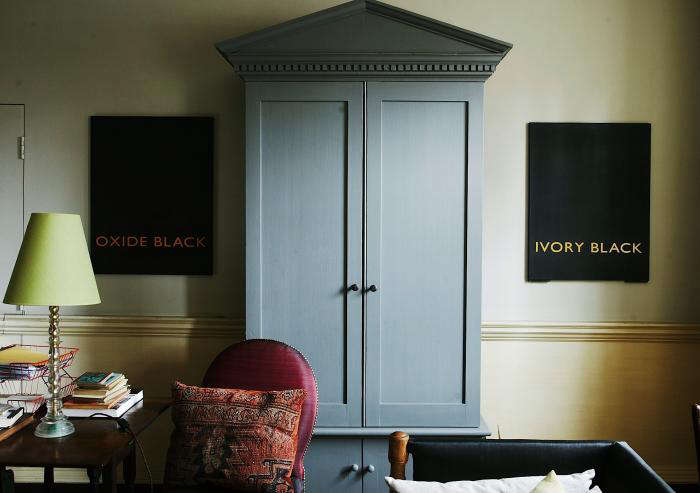 Above: In her private office, the hand-painted signs are a humorous nod to the various shades of black. 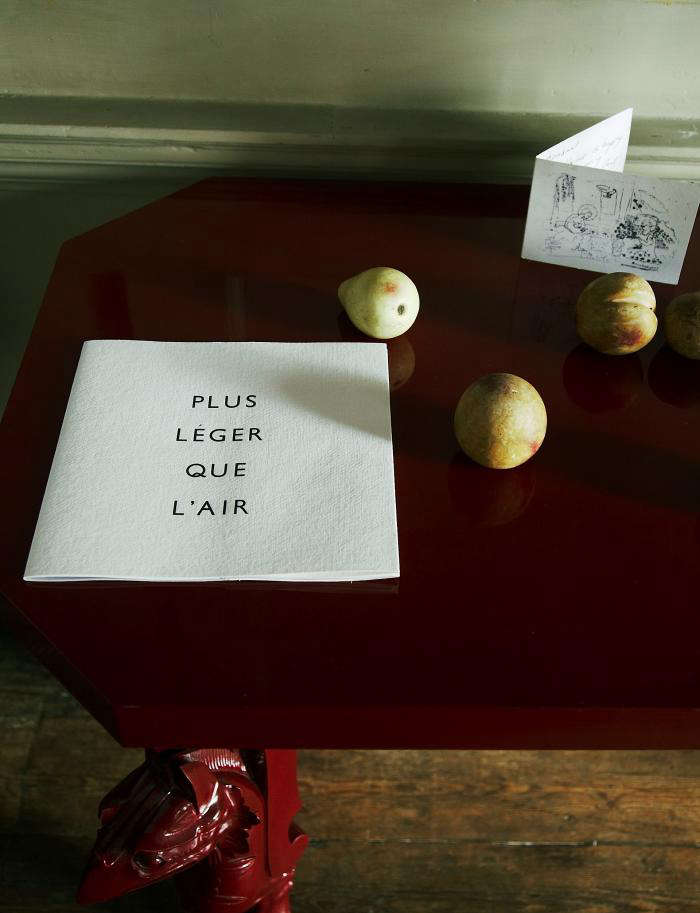 Above: A catalogue of Kennedy’s show in Paris, “Plus Léger Que L’Air,” and antique carved fruit sit on a crimson lacquered table with griffin feet.

Above: Kennedy designed the black four-poster bed in the master bedroom. More calls to action are printed on specially designed horsehair bags (chef Nigel Slater uses his for vegetable shopping in the market); this one is embroidered with the message “Dites-Moi,” which means “Tell Me,” while the hand-painted sign on the wall says the same in Italian. 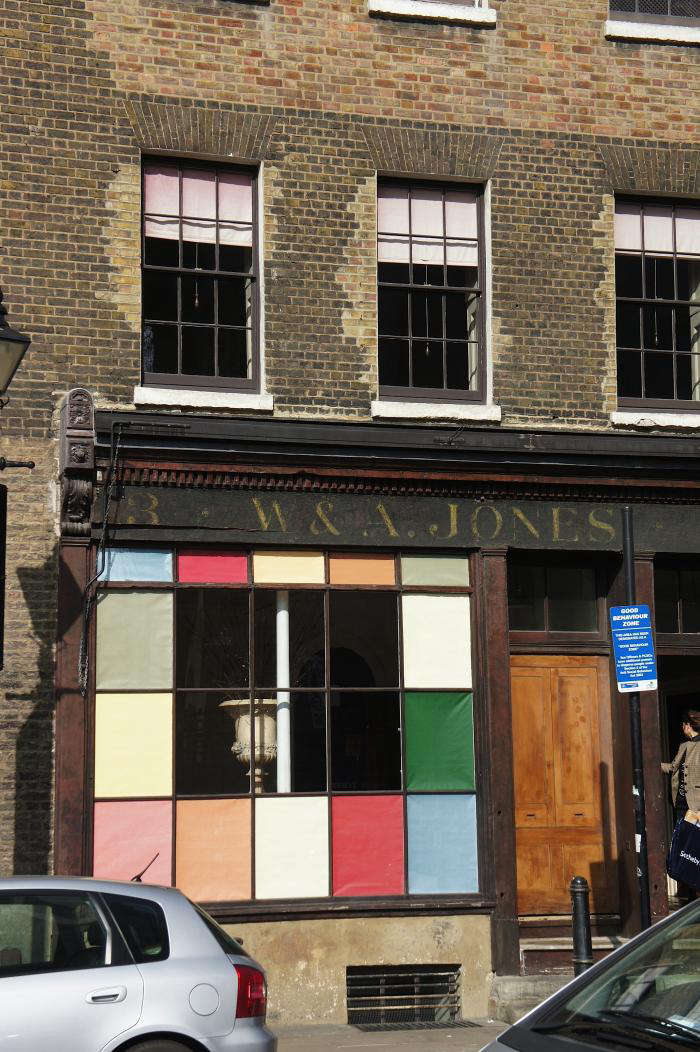 Above: The entry to Kennedy’s home, showroom, and workshop. Photograph by Christine Hanway.

To see Marianna Kennedy’s rooftop retreat, visit A Roof Garden in Spitalfields. And find out more of her secrets in Style Counsel: The Schoolmarm Look with Marianna Kennedy.

13 Boutique Paint Companies from Around the World