The Line is moving in with the in-crowd. What began two years ago as an online fashion and design site with an offline NYC component (see The Apartment: A SoHo Loft Where Everything Is for Sale) has since expanded to include a luxe West Coast clubhouse on Melrose Place in LA. And now the Line, led by executive creative director Vanessa Traina, has taken a summer rental in the Hamptons and furnished it with a mix of modern and vintage, rustic and glam.

It’s a fantasy beach house that’s actually a shop. And no one has to leave empty-handed: There’s a “take one, leave one” stack of summer reads by Danielle Steele (mother of Vanessa Traina) among the otherwise high-ticket splendor.

Photography by Hanna Tveite, courtesy of The Line. 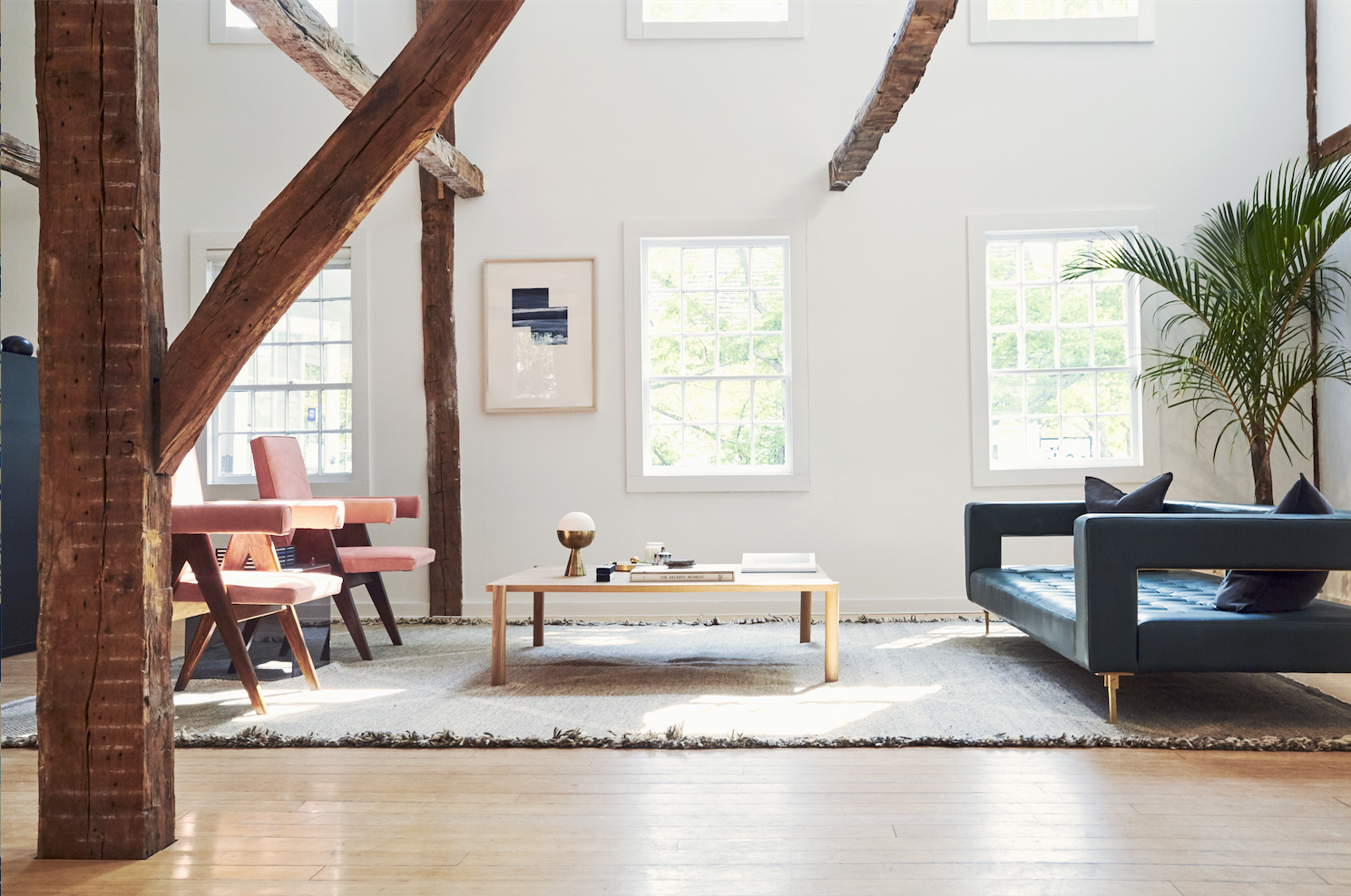 Above: Located two blocks from the ocean, the Line’s new outpost is a 1720 farmhouse on Main Street in the shingled historic village of Amagansett (home to another of our favorite haunts, Tiina the Store). Previously converted as a shop, the structure features a sunny double-height living room with exposed beams and sash windows. The curious urn-shaped piece on the coffee table is Apparatus’s brass and porcelain Incense/Tea Light Burner. 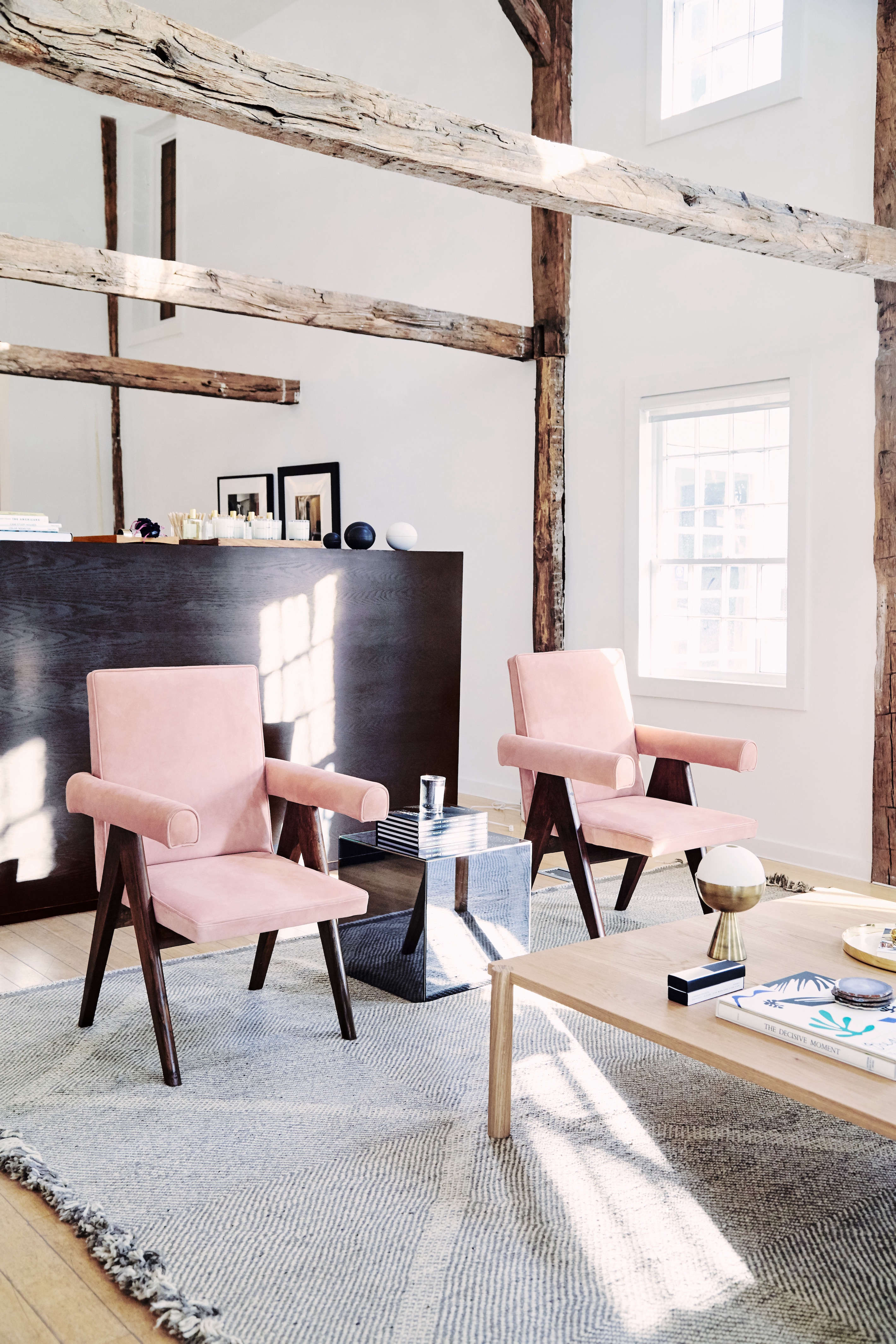 Above: The most buzzed-about offering: a pair of 1954 V-chairs by Pierre Jeanneret, part of his collection designed for an administrative building in Chandigarh, India—and rescued from the junk heap in recent years (see A City that Sat on Its Treasures, but Didn’t See Them). Reupholstered in dusty pink suede, they’re price on request. 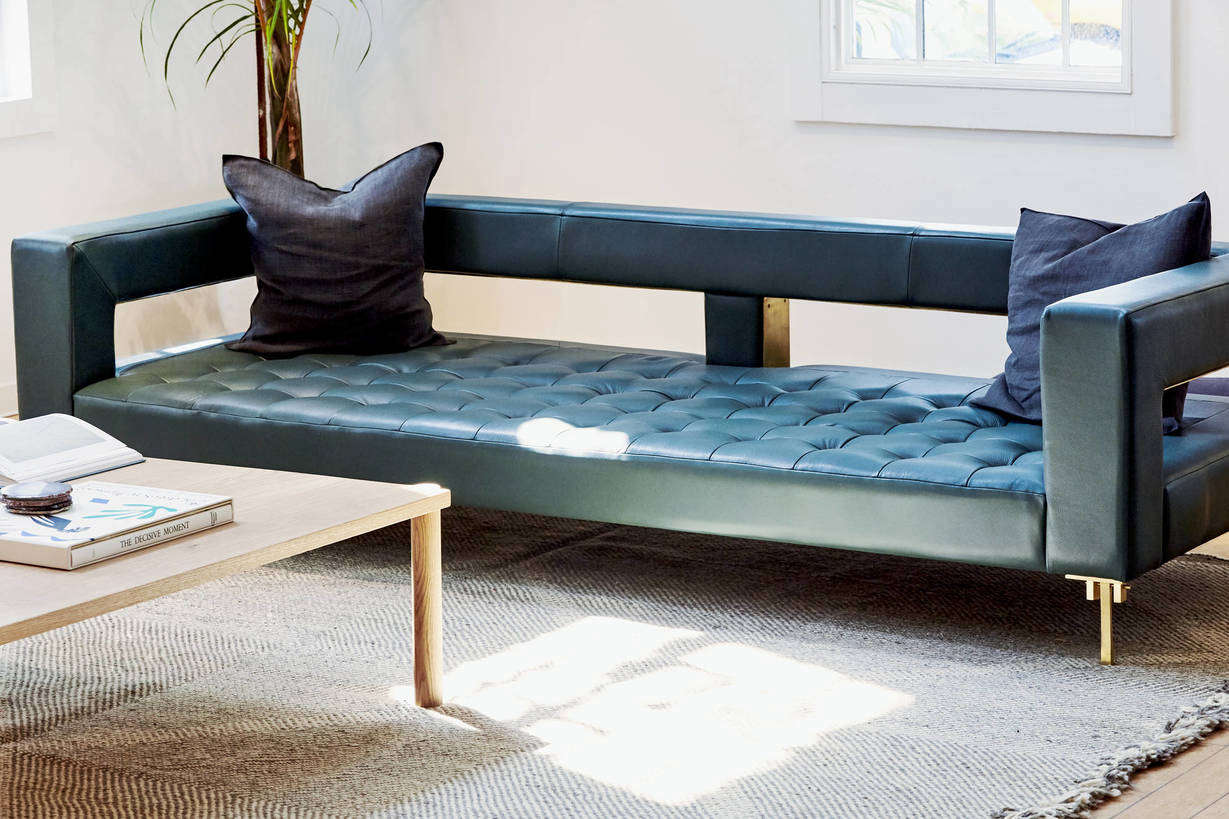 Above: The other dramatic piece in the room is Swedish-Mexican designer Alexander Diaz Andersson’s Air Sofa by Luteca. Inspired by I-beams, it comes in a range of leather upholstery and is available in custom sizes. 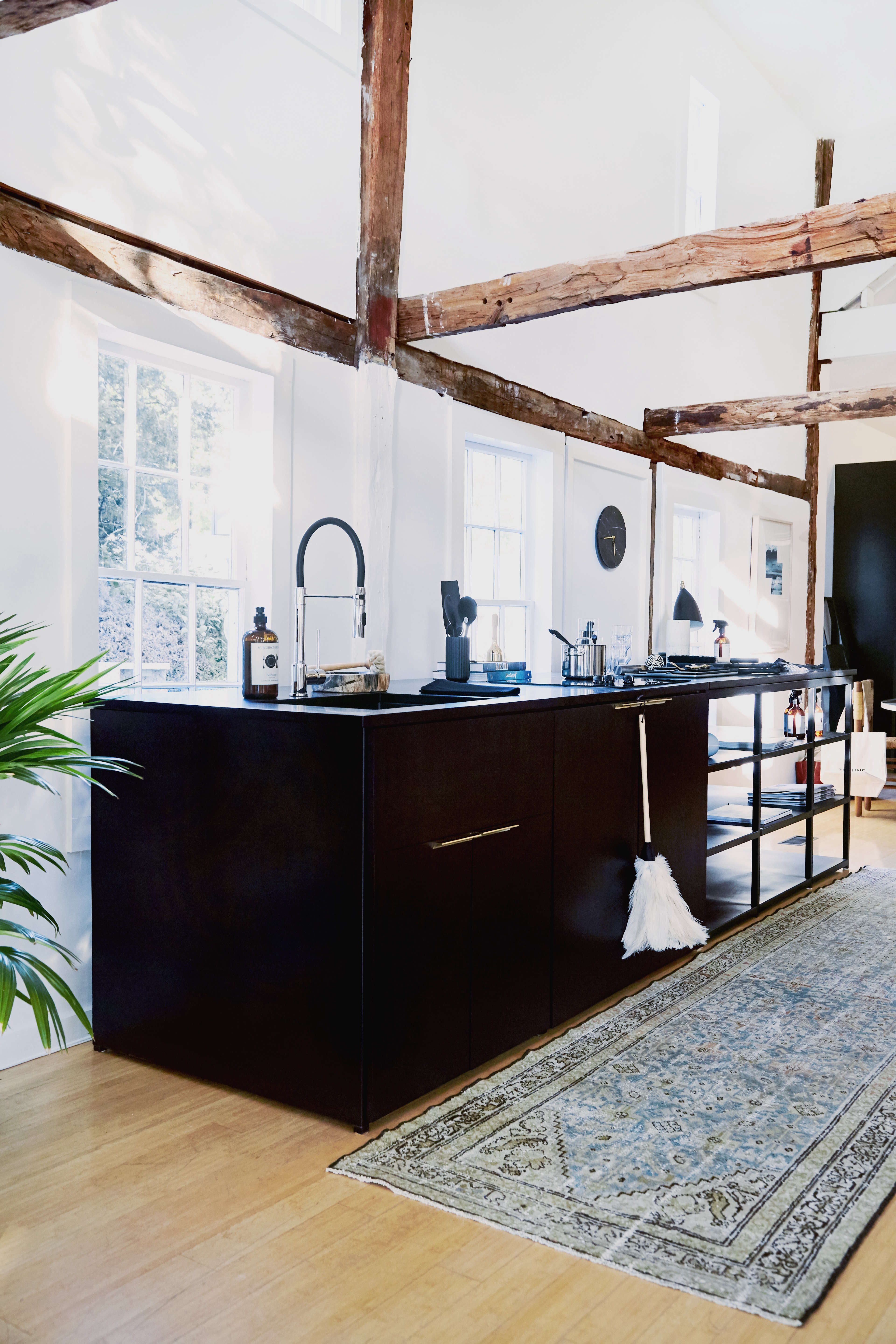 Above: The kitchen is equally chic: Composed of a long island designed by the Line’s in-house team in collaboration with unspecified architects, it’s made of ebonized white oak with unlacquered brass hardware. The counter is Paperstone, a lab material much like the Richlite Julie used in her Mill Valley kitchen—see Remodelista Countertop Picks. Yes, even the Redecker White Ostrich Feather Duster is for sale (it’s $44). 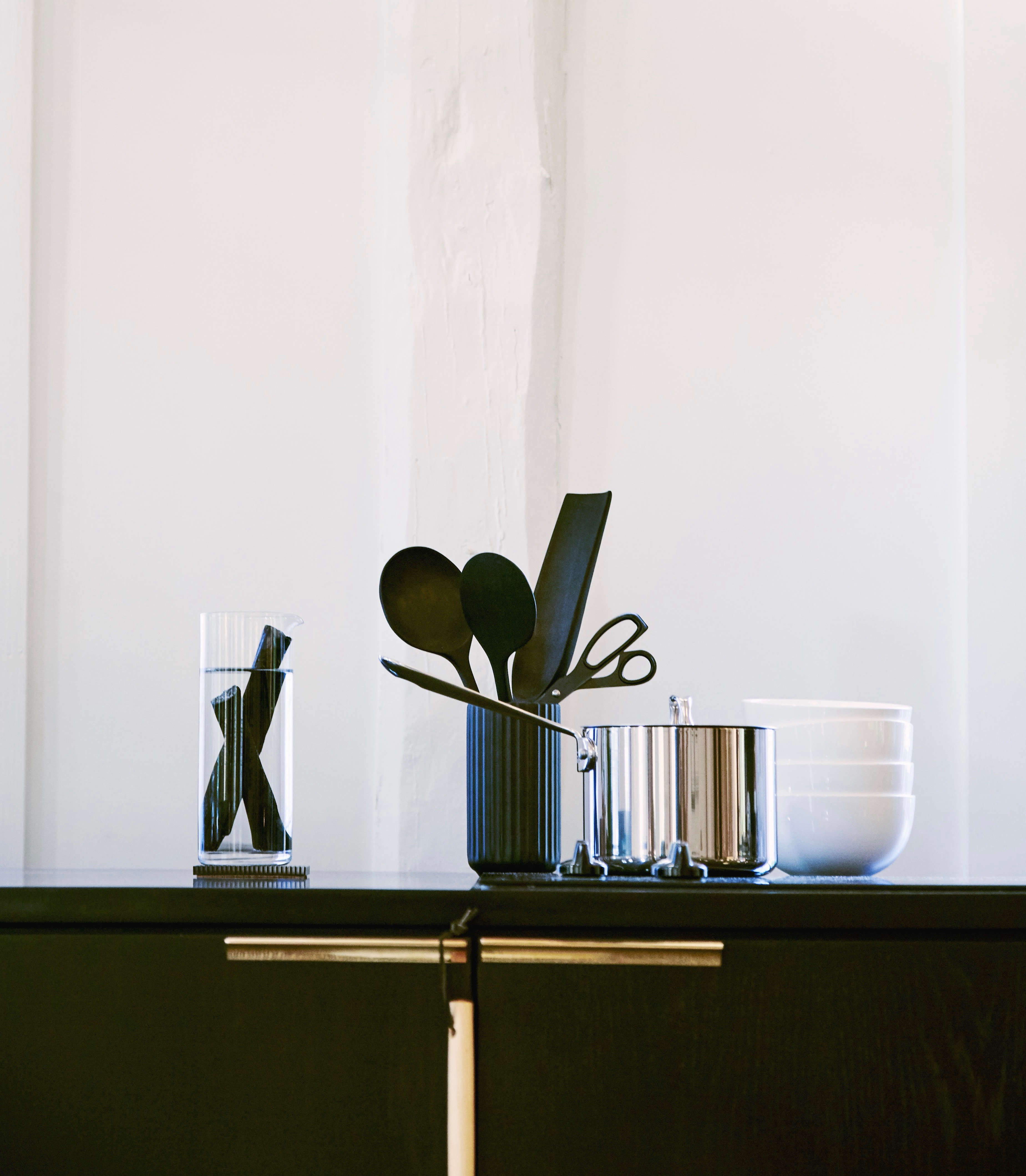 Above: Like us, the Line’s masterminds have a weakness for black utensils. Shown here: Limited edition Spoons and a Scoop by Josh Vogel of Black Creek Mercantile in a Ridged Porcelain Vase by Lyngby of Denmark. 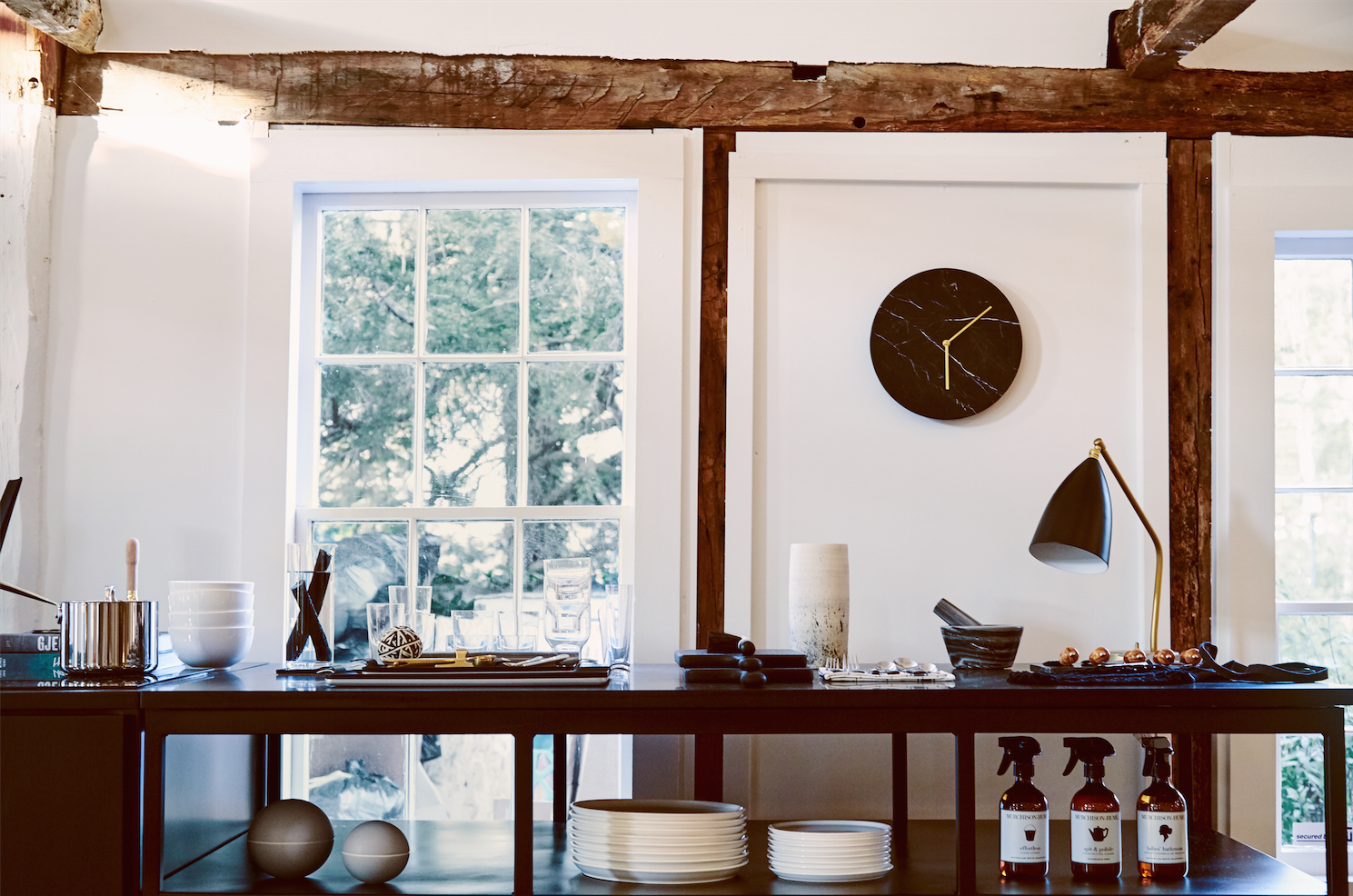 Above: The island is built in two pieces and can be ordered with cabinets or open shelving, or a mix of the two; a concealed dishwasher and under-the-counter fridge can also be incorporated into the design. At the shop, the shelving section shown here is used for display and as a bar. 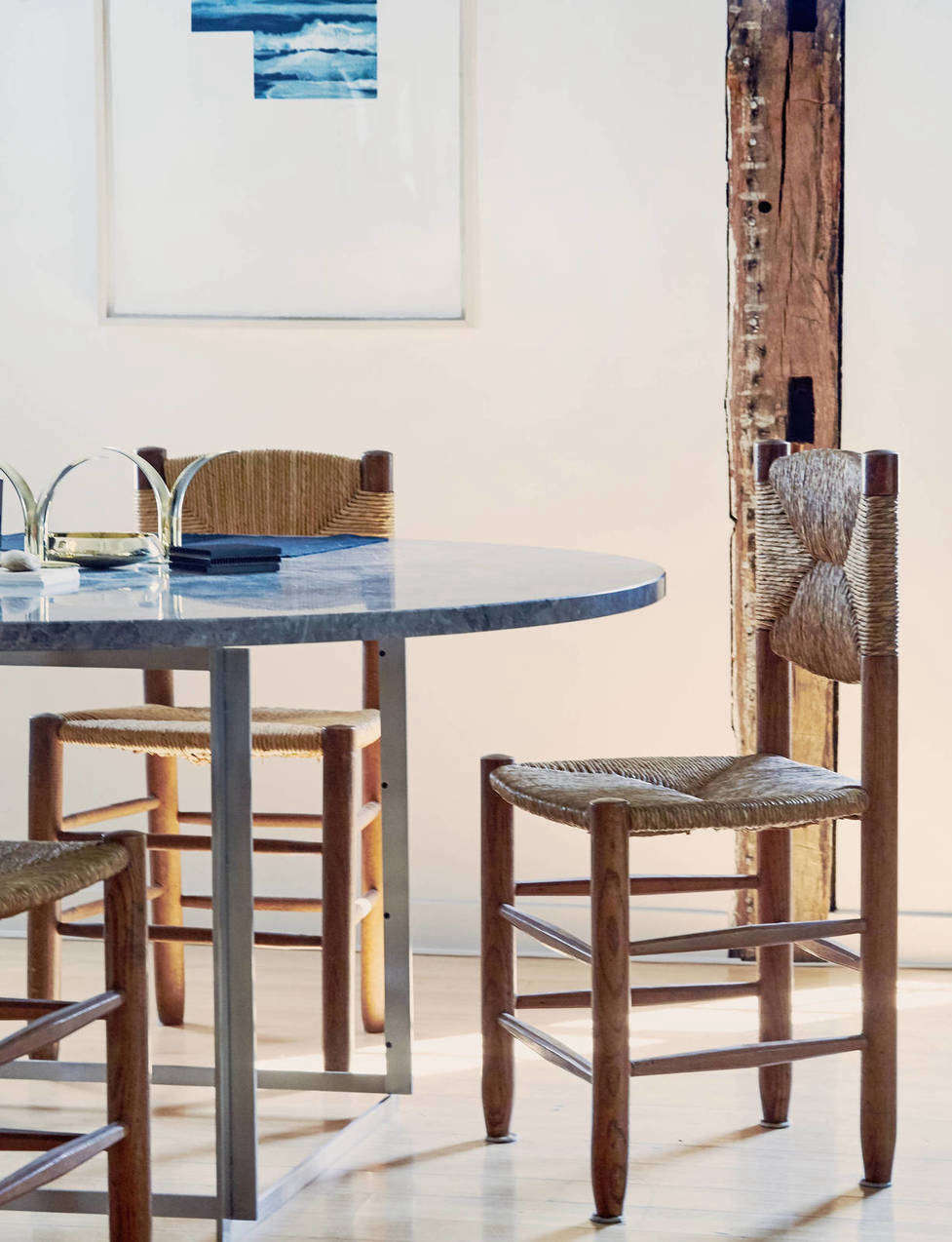 Above: Charlotte Perriand’s much-coveted midcentury rush chairs—$4,000 for four—surround a Fritz Hansen reissue of Poul Kjærholm’s 1959 PK54 Table with a gray-brown honed marble top. The Lily Candleholders, $118, are Skultuna’s reproductions of a design made for the 1939 New York World’s Fair. 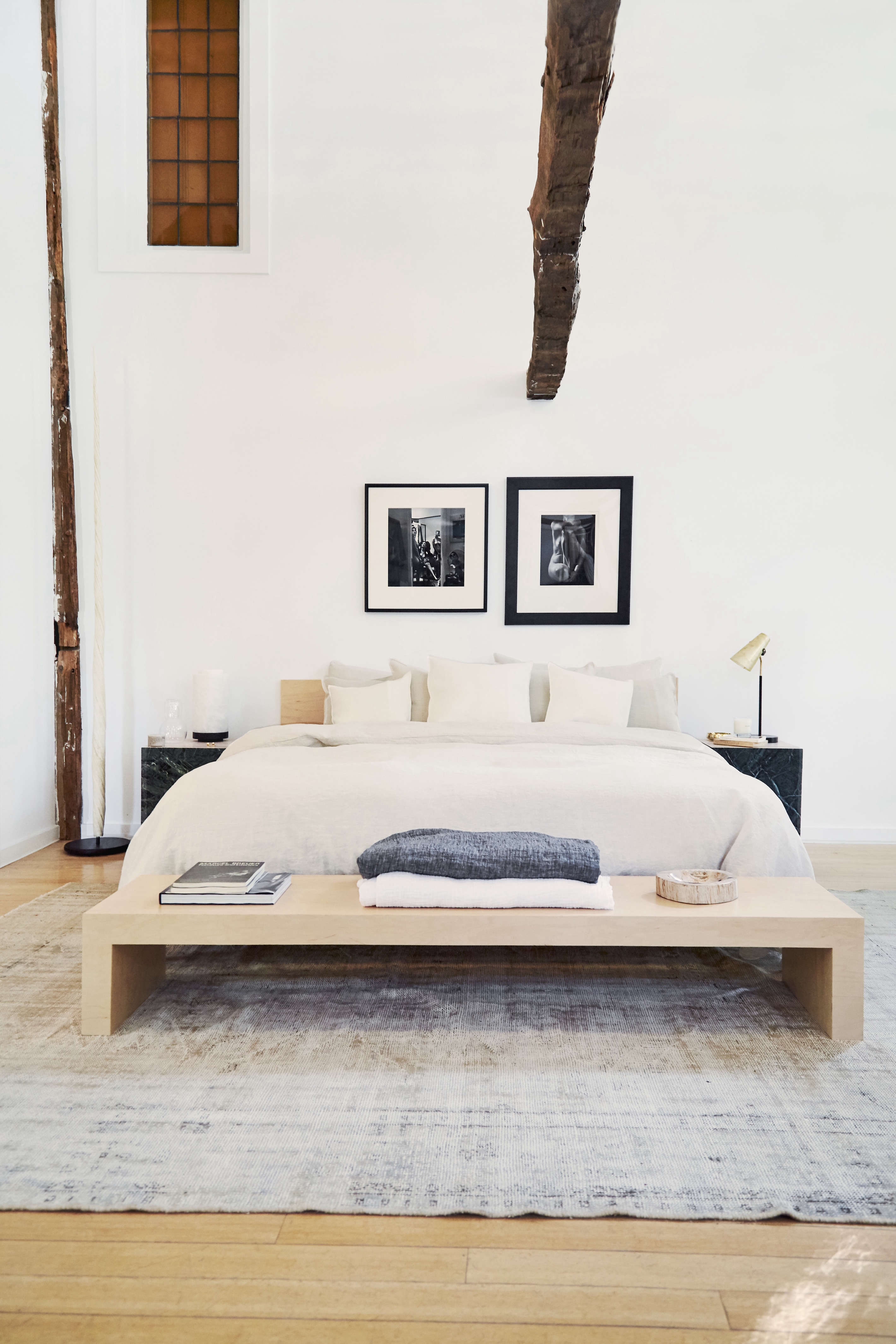 Above: A white oak bench and bed frame rest on a pale Turkish rug in the double-story bedroom. The photographs are by Helmut Newton and Ruth Bernhard, a protégé of Edward Weston. 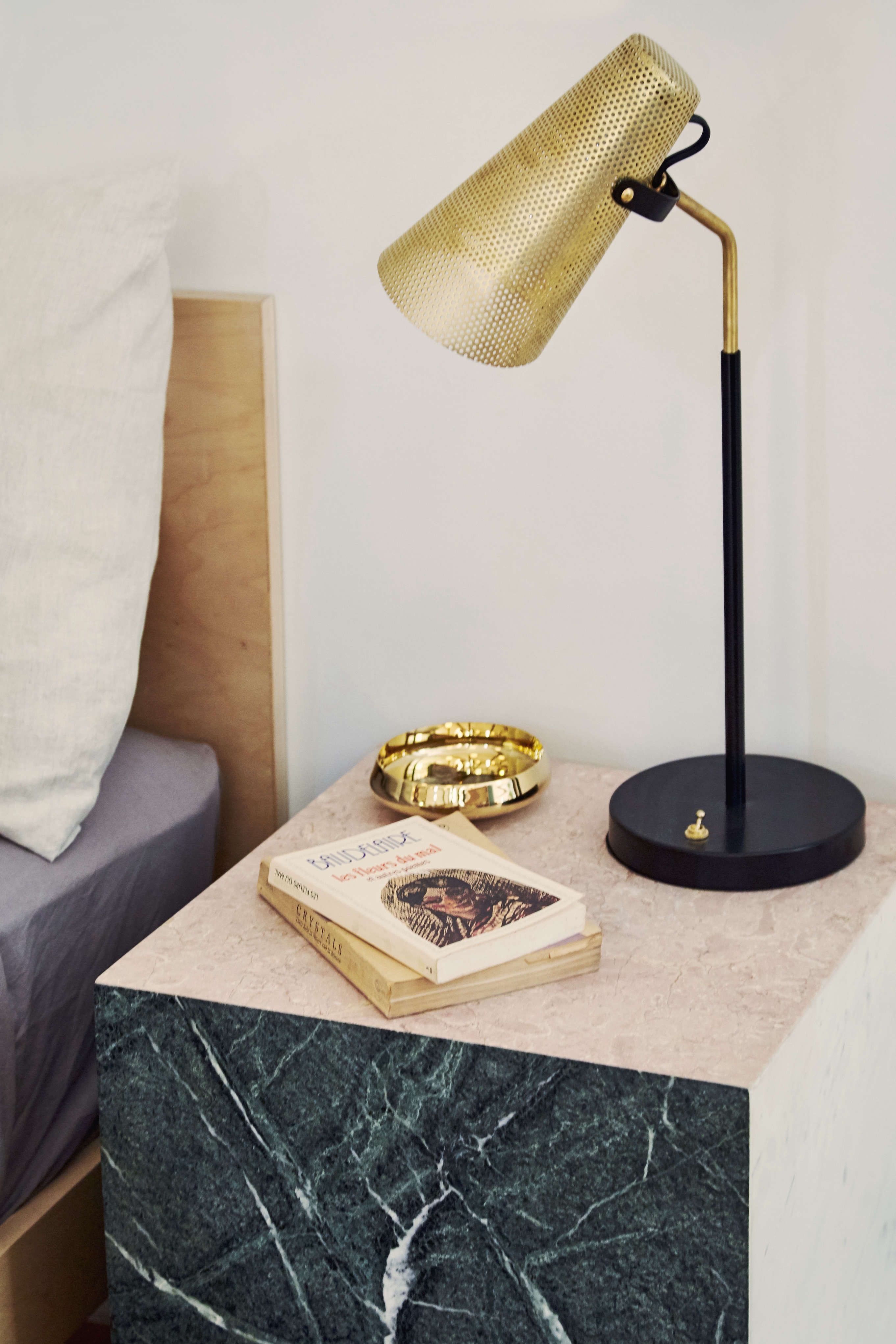 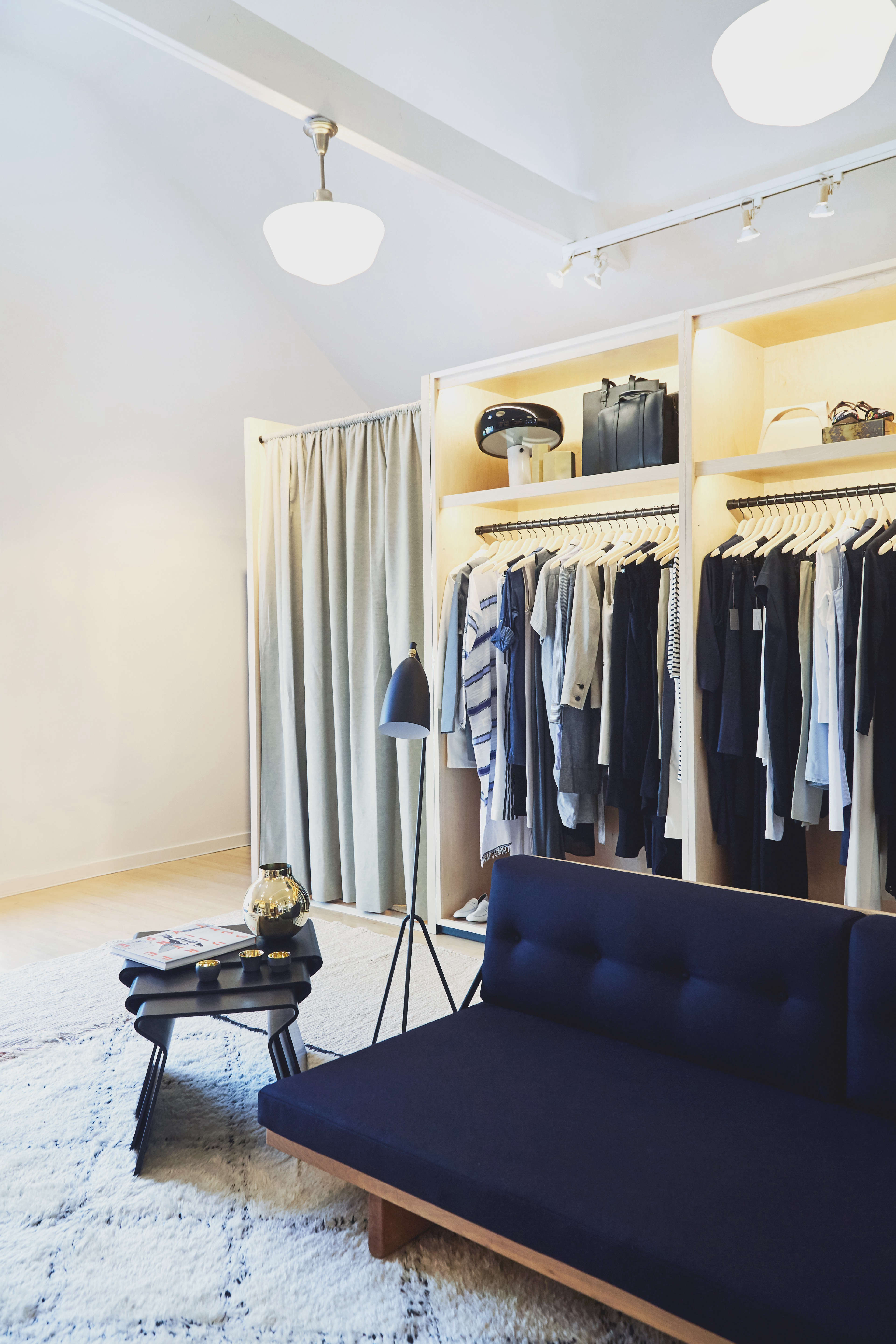 Above: Open closets and a daybed in the dressing area. The Line offers its own fashions as well as pieces by a small stable of designers. The standing lamp is Gubi’s reissue of Greta Magnusson Grossman’s classic 1940’s Grasshopper design. 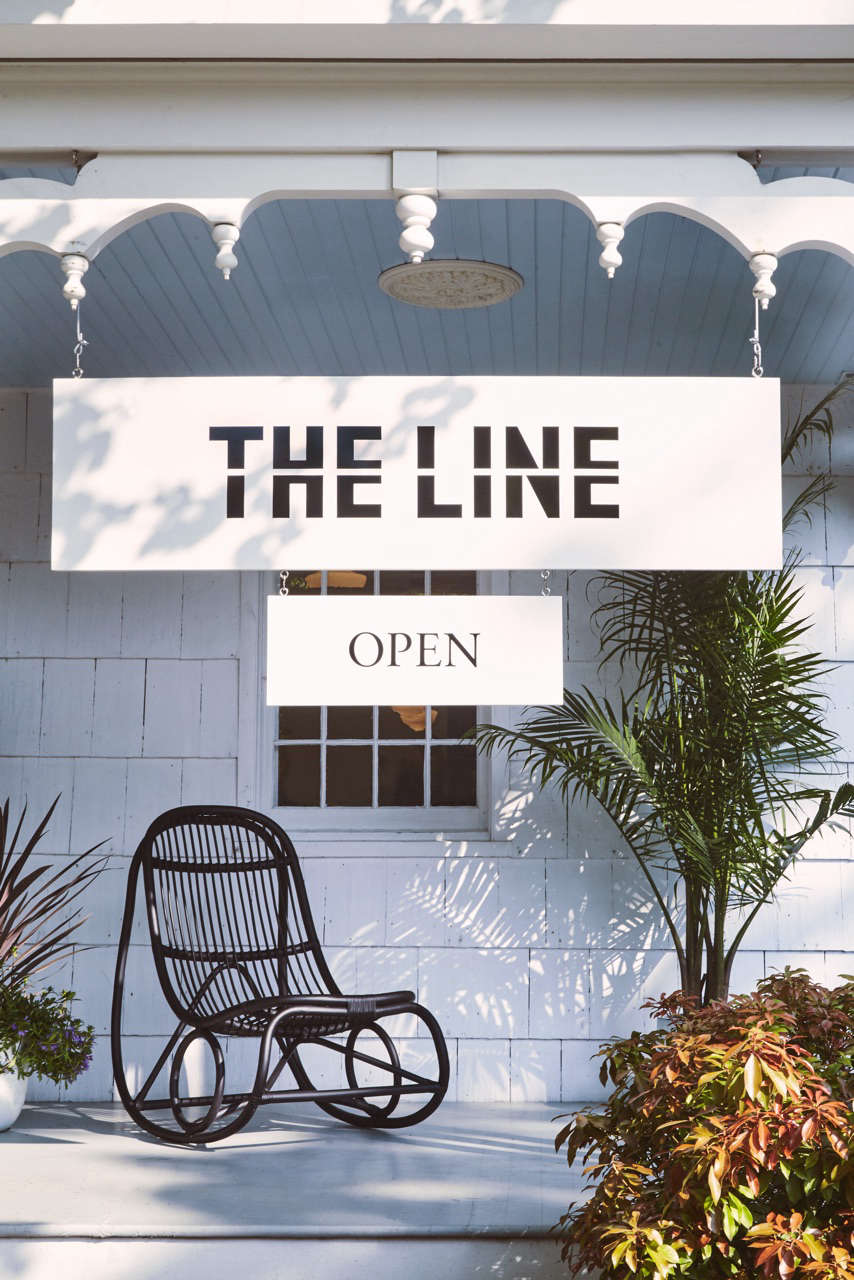 Above: A Nanny Rocking Chair by Danish midcentury designer Nanna Ditzel on the front porch. The Line is located at 154 Main St., in Amagansett.

$44.00 USD from The Line
Lyngby Porcelain