Sometimes it takes the absence of something to really appreciate its true worth. Such is the case with Manka’s Inverness Lodge in West Marin, which was destroyed in a fire in 2006. Owned by Margaret Grade, the Arts and Crafts-era hunting and fishing lodge was legendary for its private-club like atmosphere with a dash of whimsy and its much lauded daily changing prix-fixe menus, overseen by Grade and her longtime partner, chef Daniel DeLong. Although the main lodge and restaurant have gone, the hotel remain intact and devotees have longed for a reopening of Manka’s restaurant.

So when Grade and DeLong took over the Olema Inn in the neighboring town of Olema, renaming it Sir and Star, there was hope that Manka’s restaurant would somehow be resurrected. Grade is quick to point out, however, that “This is a really different spot. This is a roadhouse.” While Manka’s is tucked away in the hills above Tomales Bay, Sir and Star sits at the intersection of two main roads. Grade, now the sixth owner, points out, “This was never the fanciest restaurant but always the best. I had to think of what had gone awry and realized that the prior owners had misinterpreted the place and did a lot of events to the exclusion of locals who lost interest. Our intent is to serve everyone with exemplary food within reach and to make pricing likewise.” (Dishes are broken into three price groups from $10 to $20.) Not unlike Manka’s, however, Grade and DeLong have created a warm, inviting atmosphere with a healthy dose of Grade quirkiness, only this time, it’s roadhouse style.

Photography by Alexa Hotz for Remodelista. 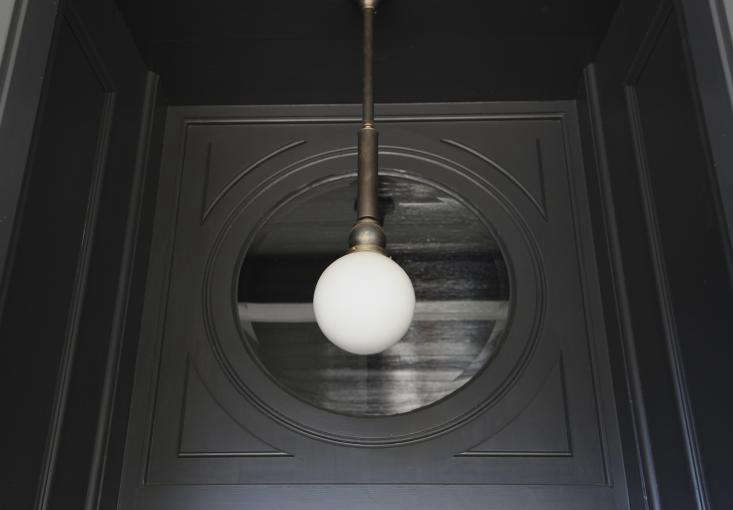 Above: Sir and Star takes its name from the intersection where it sits at Sir Francis Drake Boulevard and Star Route One. 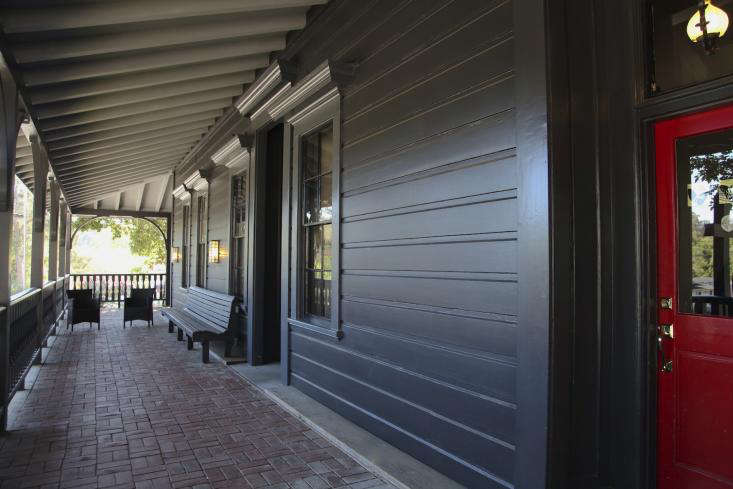 Above: The former white wedding cake of a building was turned into something more simple and Shaker-like, with the exterior painted in Benjamin Moore’s Black Panther. The trim is subtly different, with more sheen and pop to show detail. 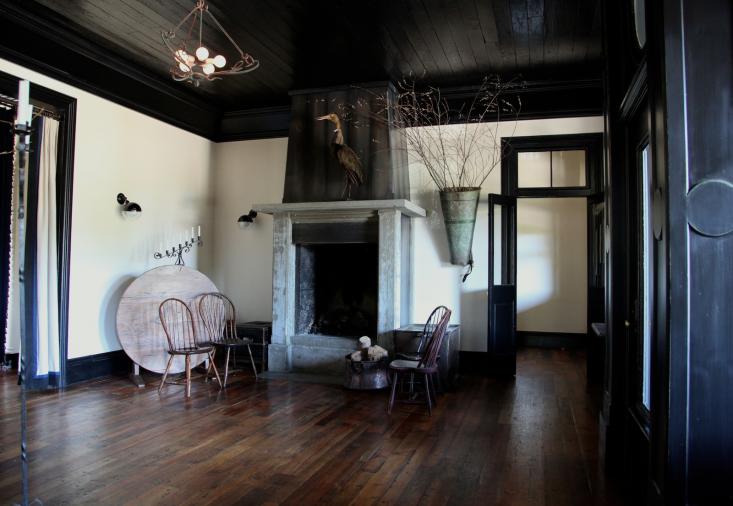 Above: Grade reconfigured the space, bringing in a few walls to make the place feel fluid and to create a central reception area. 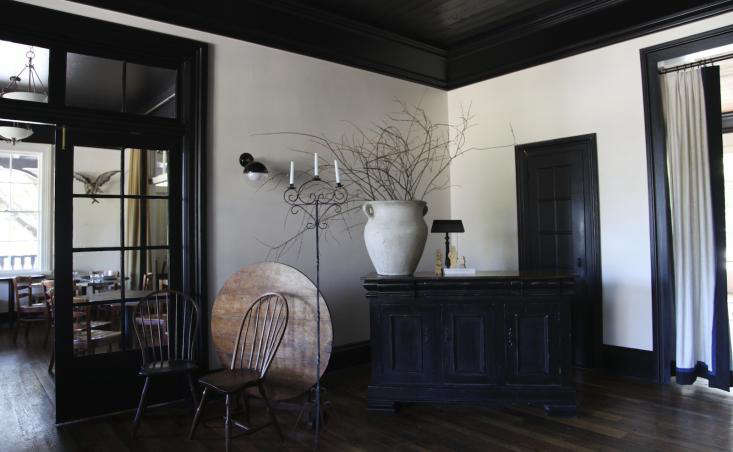 Above:The vintage light sconces (one shown here) are from Obsolete. Grade explains, “They have a sense of curiosity; they’re a bit like smiley faces.” 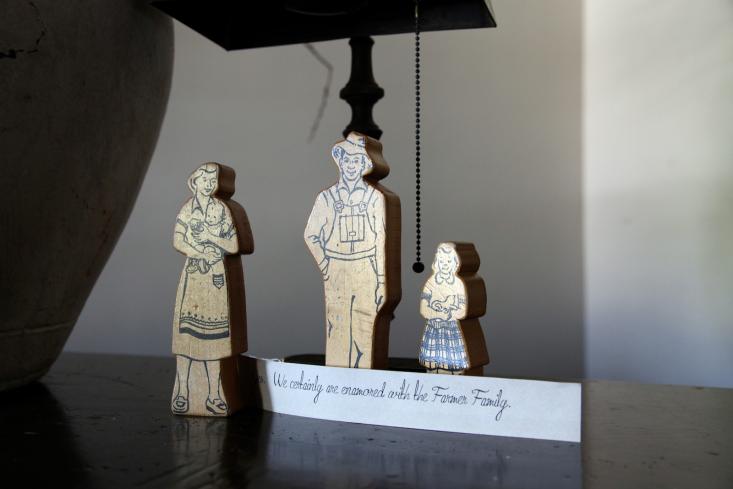 Above: Speaking of the decor, Grade says, “I wanted a sense of humor, not just to create a traditional ‘ye olde roadhouse.'” 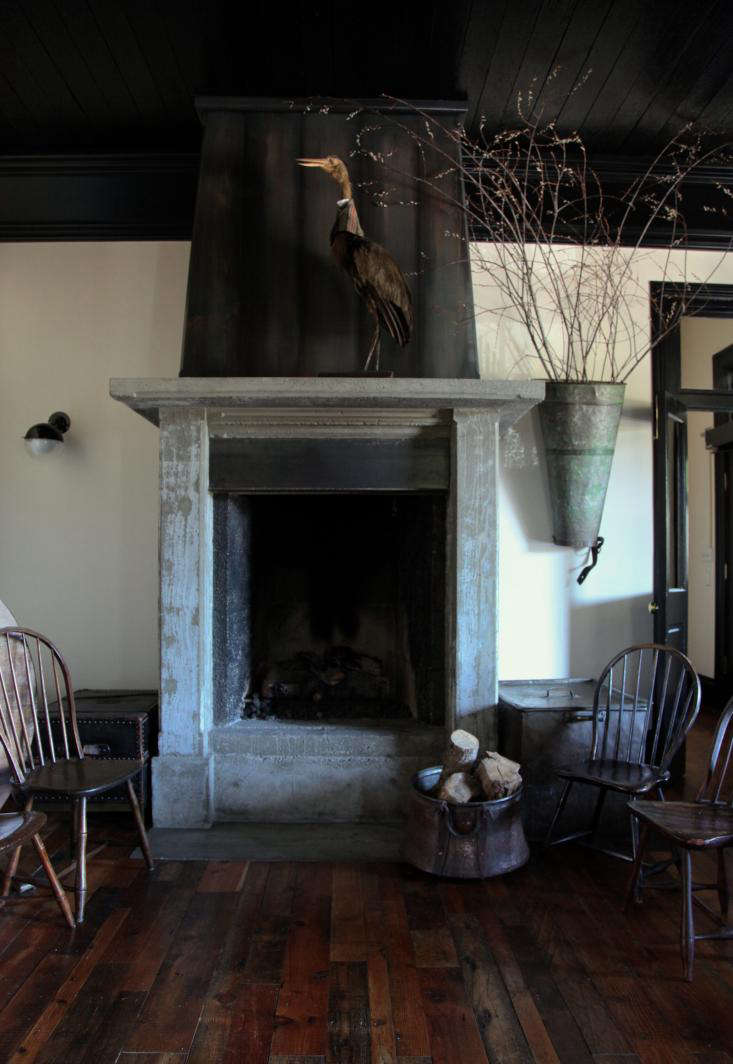 Above: Grade currently relies on a gas fireplace; when she gets her permit, “We’ll be cooking there with a rotisserie–a blazing fire creates a sense of intimacy.” 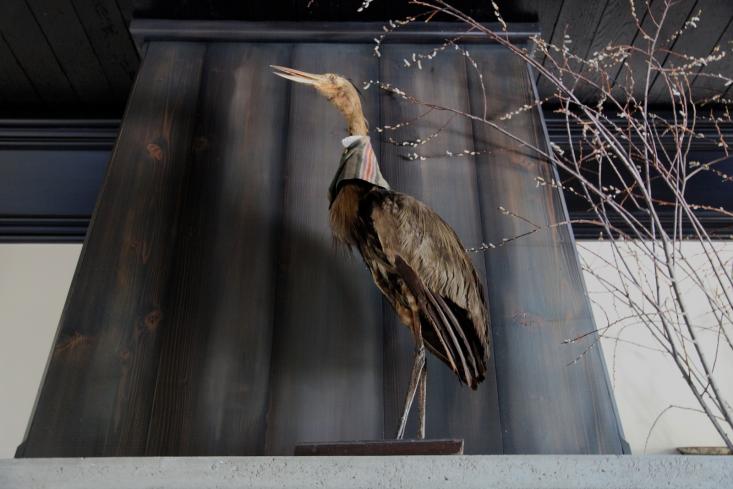 Above: The fireplace surround is made from repurposed flooring with paint dragged across it to give it an indigo sheen. 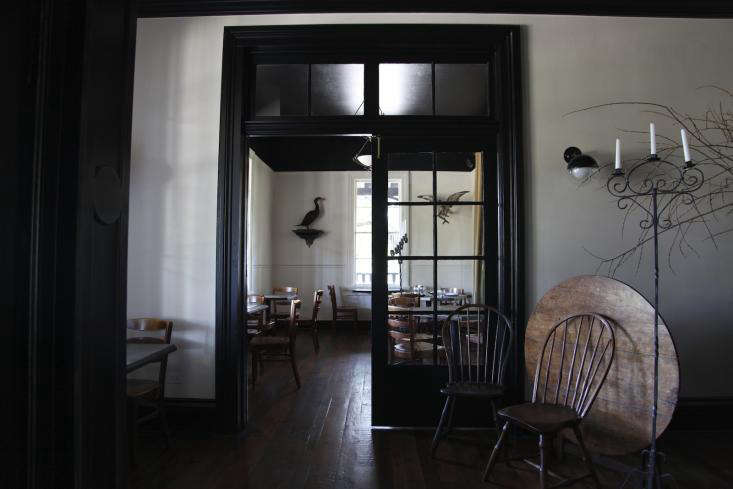 Above: Sir and Star is still a work in progress, the folded tables are for wine tastings and extra dining if needed. 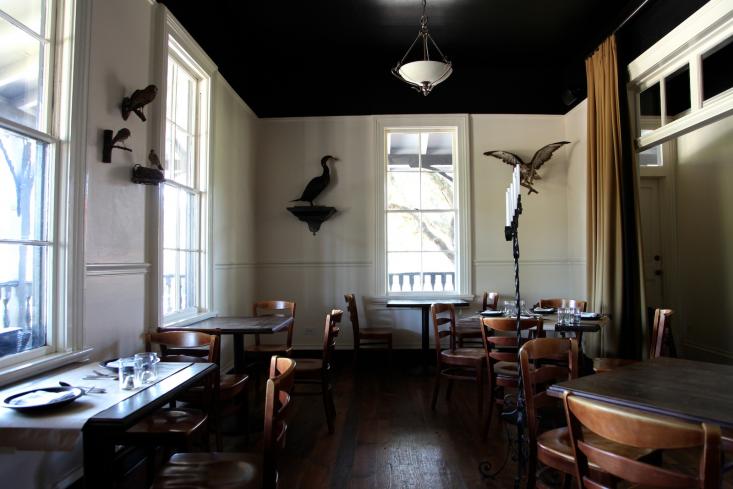 Above: Grade painted the ceilings in “the blackest of blacks” and displayed ornithological taxidermy on the walls in this room. She’s a fan of the Potter School of taxidermy, named for Walter Potter, an “English taxidermist noted for his anthropomorphic dioramas featuring mounted animals mimicking human life,” according to Wikipedia. 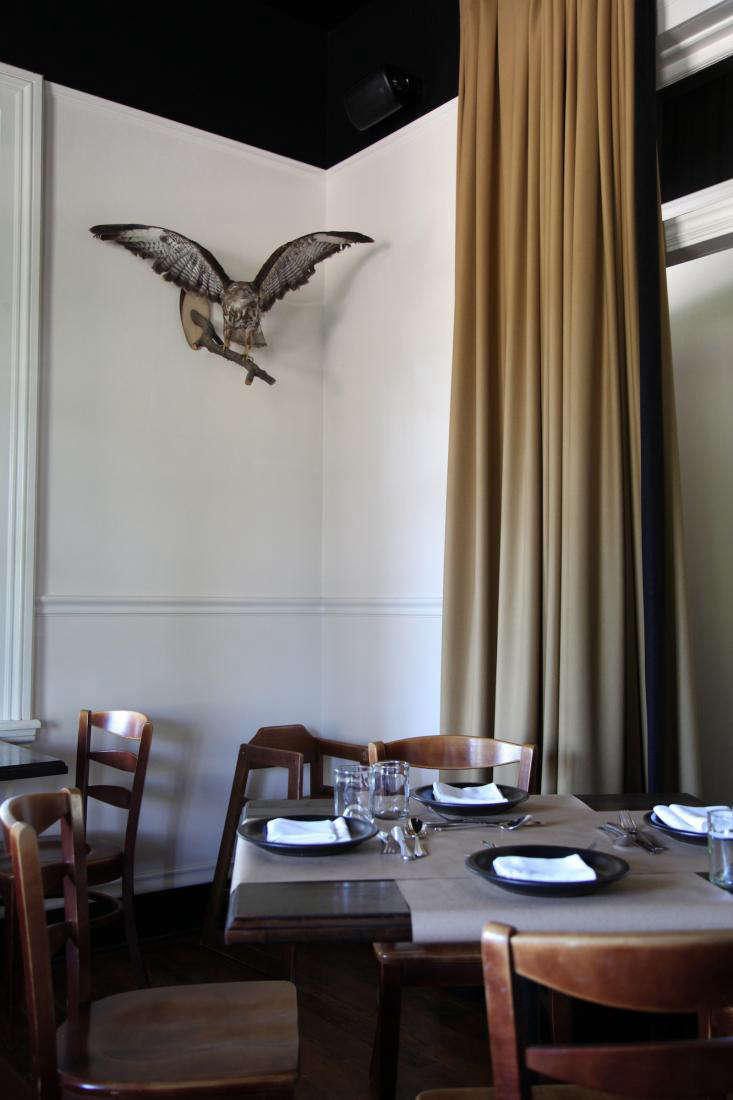 Above: Felt curtains are used to create private dining areas. Grade explains, “This allows us to have a wedding here, yet locals can be dining in an adjacent room. It’s a bit like San Francisco’s city hall, where all sorts of events with all sorts of people take place under one roof.” 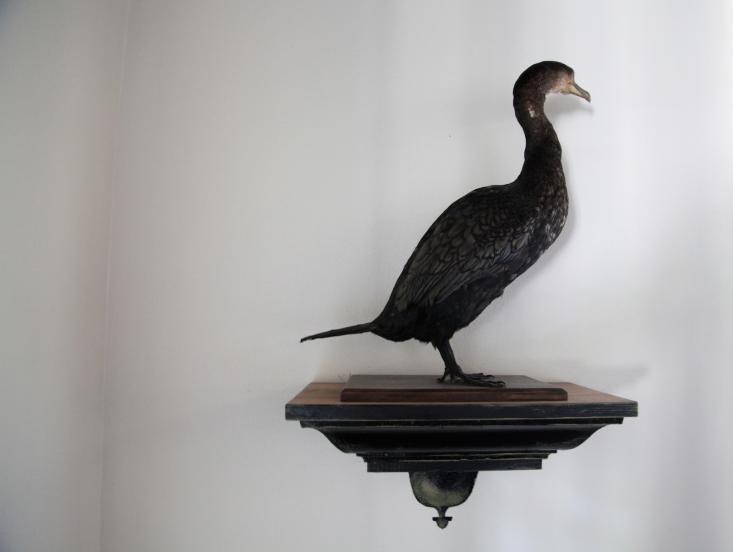 Above: Another ornithological specimen stands sentry. 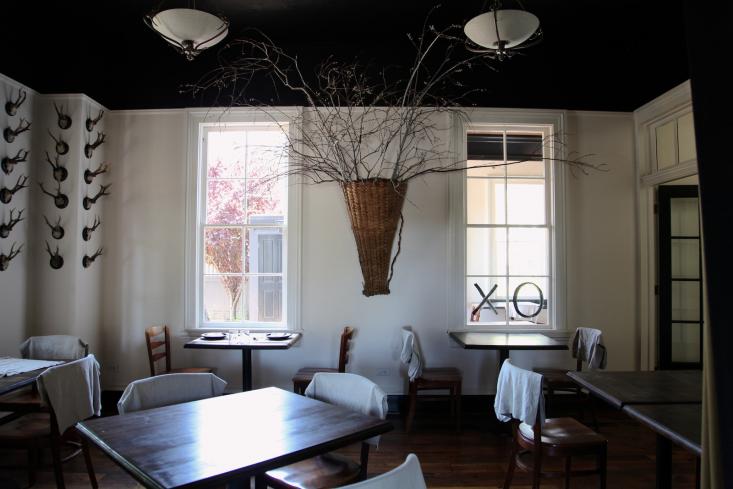 Above: The painted XO on the windows between the two dining rooms is a whimsical touch, a spur of the moment decision to add a sense of privacy. 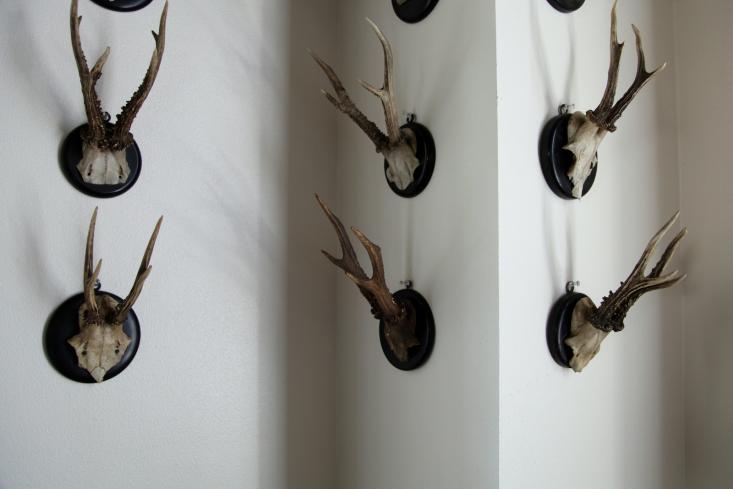 Above: Decor is not limited to avian specimens. 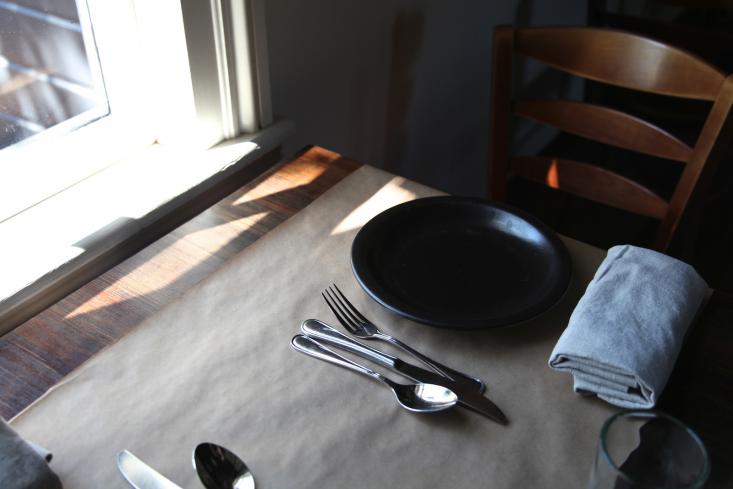 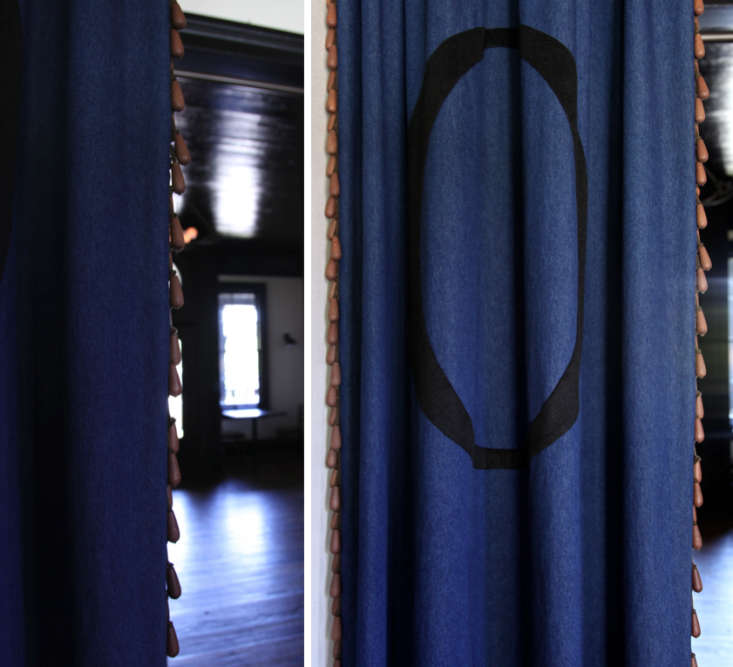 Above: Custom denim curtains with wooden beads and felted trim add an unexpected layer to the dining room and hide the kitchen from diners. 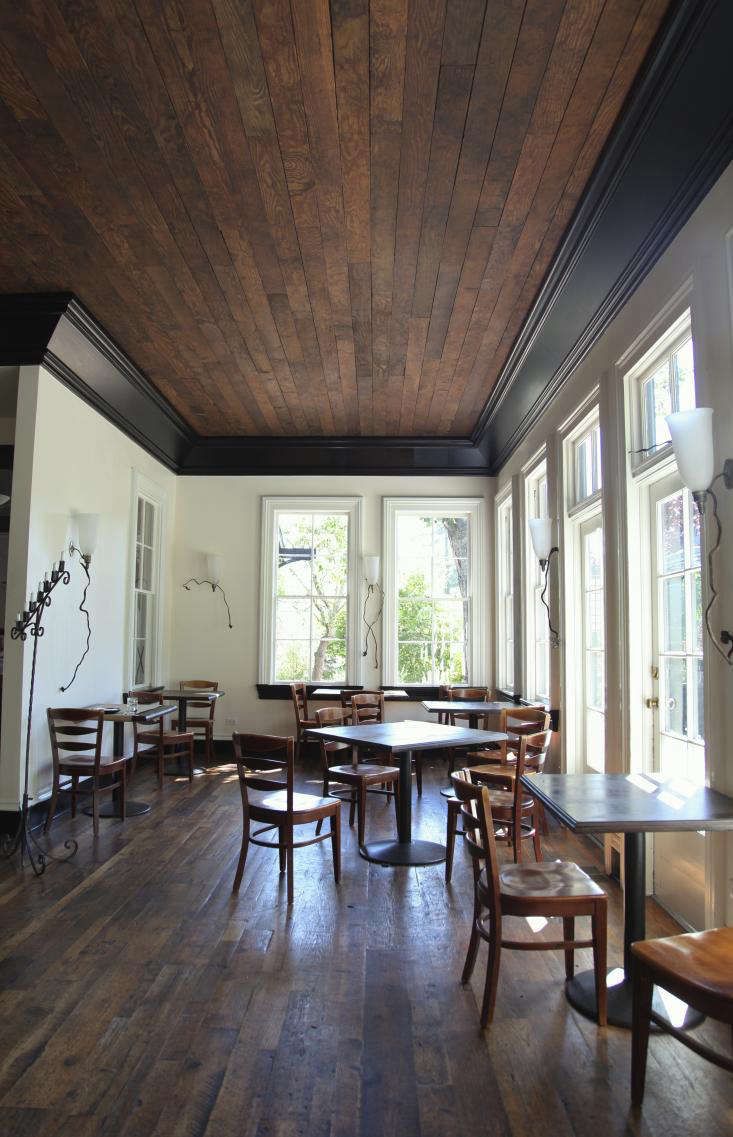 Above: The main dining room features a stained wood ceiling, which creates a sense of warmth. 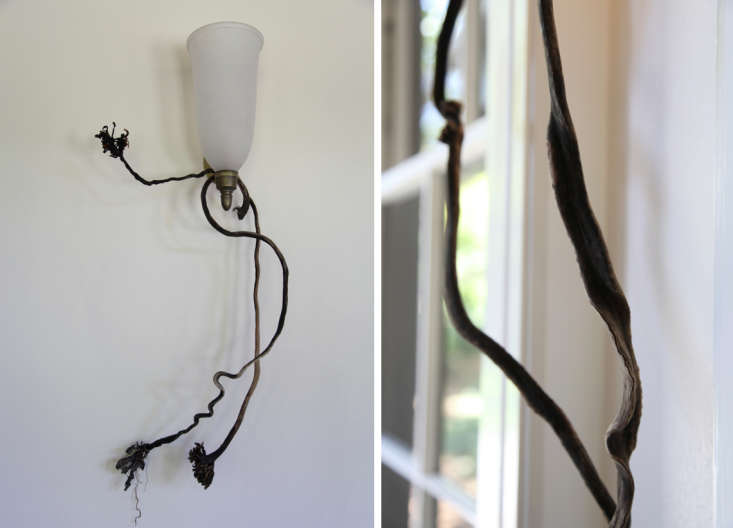 Above: When local basket maker Lina Jane Prairie brought some of her pieces by, Grade gravitated toward the seaweed itself and draped one over a light. A happy accident that has remained as decor. 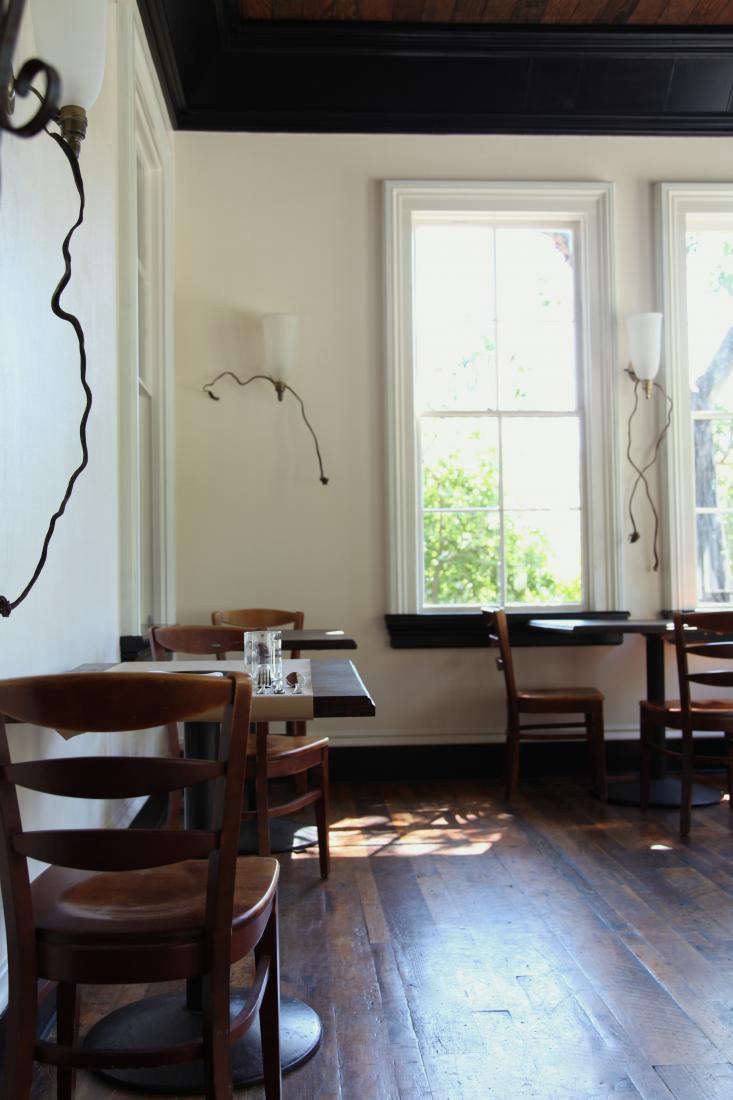 Above: Walking sticks (a type of seaweed) hung over the lights. 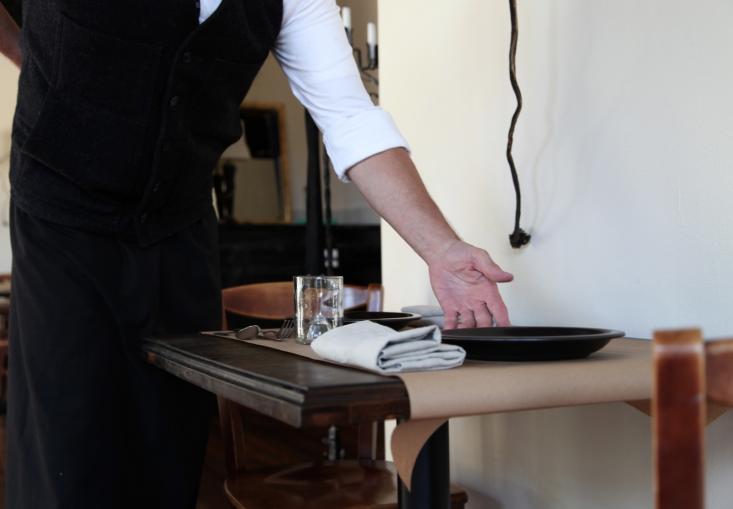 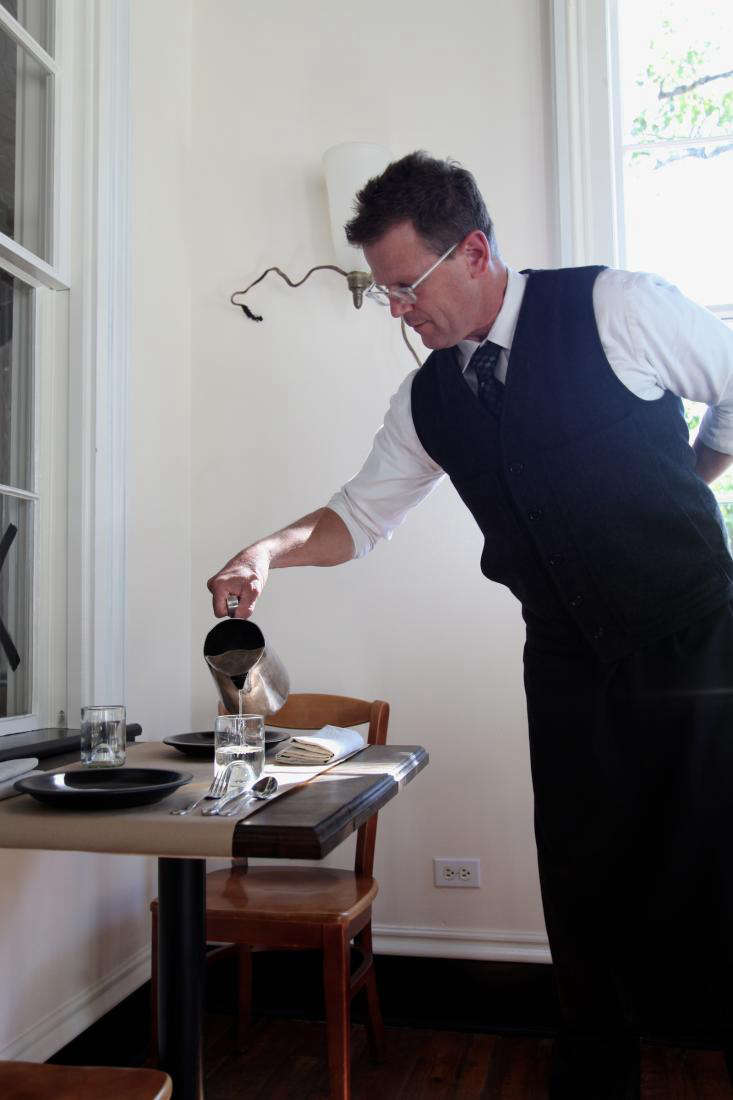 Above: Dinner service in progress. Grade who worries that Sir and Star may seem like too sparse a palette, and may be intimidating and interpreted as formal for some diners, points out that the restaurant is still a work in progress, then adds, “I cook, thankfully I can put things on the table that are compelling–food covers a lot of sins.”

Location of Sir and Star in West Marin: