Located in the elegant lobby of Tribeca’s 1900s Merchant’s Square building at 220 Church Street, the newly opened Arcade Bakery elevates the bakery to an art form. Owner Roger Gural, a Staten Island native, worked in music and television production and dabbled in baking as a sideline. He left his day job after intensive study at the French Culinary Institute in New York City, moved to Paris for a yearlong apprenticeship at Au Duc de La Chapelle in Paris (where he learned about regional breads and perfected the baguette), and worked as head baker for Thomas Keller’s Bouchon Bakery in Napa Valley.

When it came time to open his own bakery, he consulted Wythe Hotel owner and Brooklyn restaurateur Andrew Tarlow, who recommended Workstead designers Robert Highsmith and Stefanie Brechbuehler (members of the Remodelista Architect/Designer Directory).

Workstead struck a balance between past and present by using antique brass lighting and streamlined custom mahogany millwork. The couple deftly solved the problem of sloping floors by installing wall-mounted folding tables, which occupy a series of alcoves down the length of the lobby. Go to Arcade Bakery for more information. 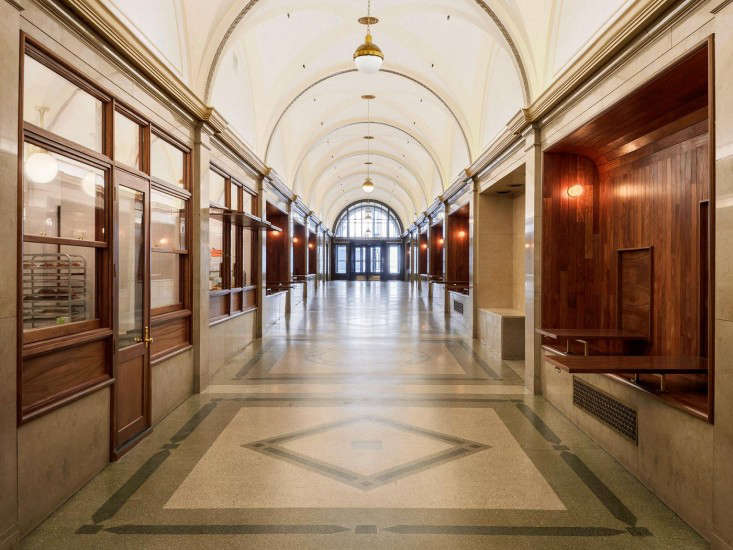 Above: “The vaulted ceilings and minimal stone and terrazzo palette inspired the language of the design,” Robert says. “With the renovation, we wanted to use materials that were warm, rich, and a contrast to the existing palette. The seating alcoves occupy what were formerly little-used display cases, with rounded details that echo the vaulted ceiling above.” 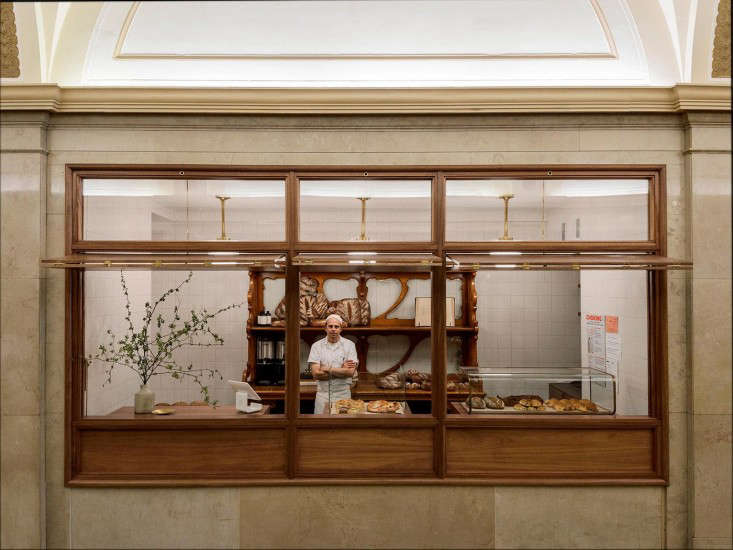 Above: Owner and baker Roger Gural stands in front of the vintage Art Nouveau bakery cabinet that Robert and Stefanie sourced from Los Angeles and had shipped back to New York City. The small glass and brass pastry case on the front counter is an antique from a shop in New Hampshire. 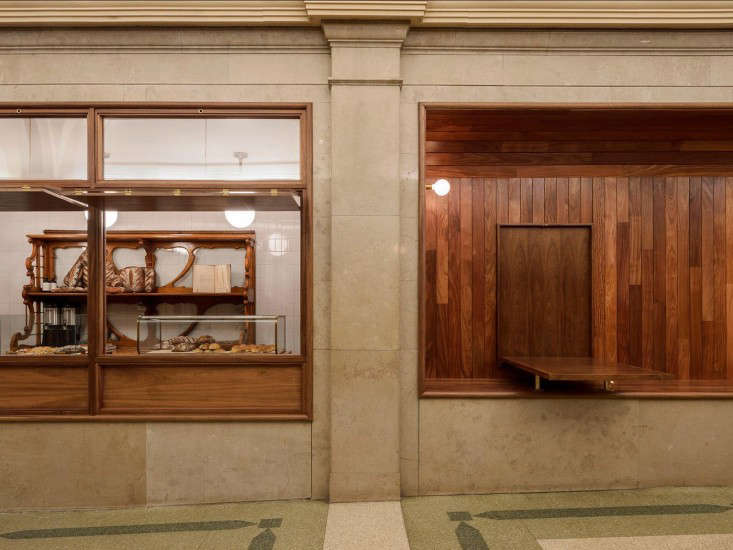 Above: “The unique challenge of a sloped floor throughout the space inspired us to come up with a solution in which all of the elements fold out of the wall, since they could not be stationary,” Robert says. The pendant lights in the bakery retail alcove were sourced from House of Antique Hardware in Portland, Oregon. 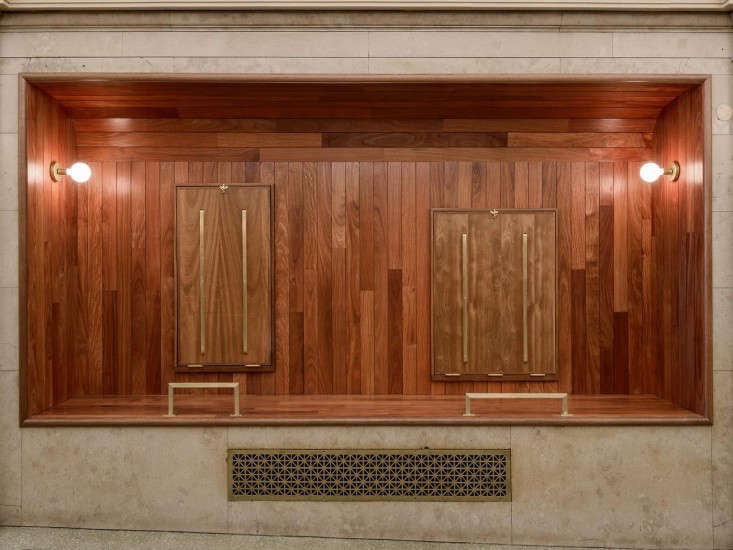 Above: The millwork was built by Ken Reynolds of Execution by Design and is either built-in hardwood mahogany or mahogany plywood. 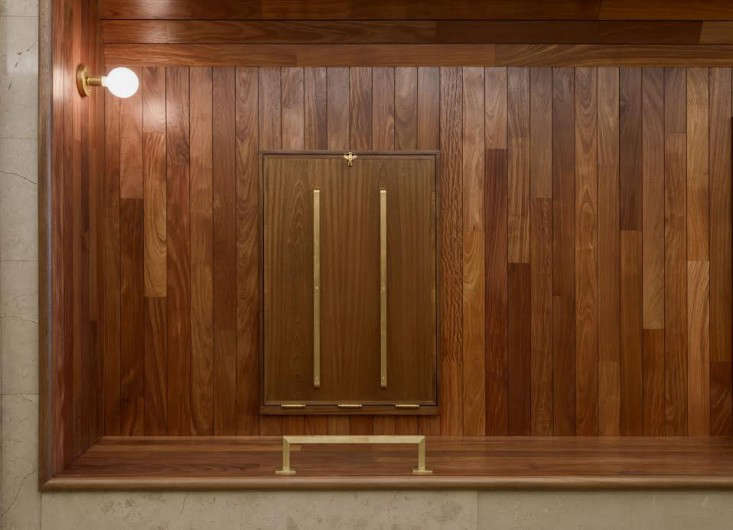 Above: The Workstead studio designed and fabricated the 18 brass wall sconces that line the walls of the bakery. 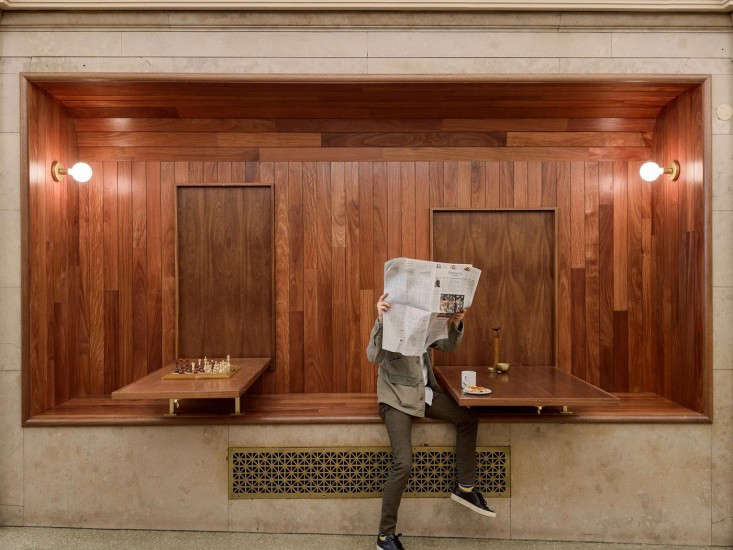 Above: “The tables protrude at varying dimensions out into the space, and can be used either as standing tables or for sitting. Brass hardware pins the tables into the wall when the bakery is closed; when open, the tables fold down to rest on a solid brass bar.” 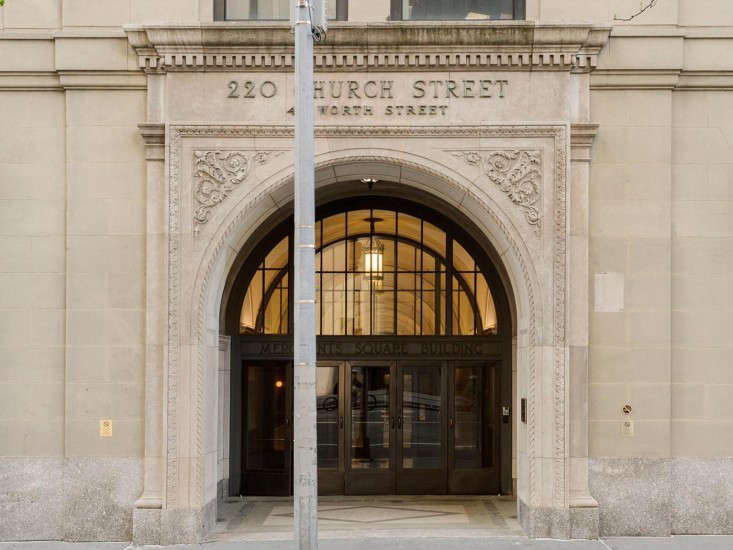 Above: The exterior of 220 Church Street in Tribeca, New York City.

See Workstead’s design of Andrew Tarlow’s hotel in Brooklyn in our post White Heat in Brooklyn: The Wythe Hotel. For more in Tribeca, see our posts Spotlight: David Weeks’ New Tribeca Studio and Sensuous Simplicity for the Thinking Woman: La Garí§onne in NYC. Then have a look at one of our favorite loft spaces in Moon & Hey at Home in NYC.

The World's Most Beautiful Bicycle (It's from France, of Course)