Are the containers in your recycling bin talking to you? In the last few years a lot of people have made attempts to give empty bottles a second life. One of the most artful we’ve come across is Alvaro Catalán de Ocón’s PET lamp project.

The Barcelona-based designer–a 2004 graduate of Central St. Martin’s school of art in London–came up with the concept of combining traditional wickerwork with castoff plastic bottles. In 2011, Catalán de Ocón unveiled the first PET collection, a series of colorful, hatlike pendant lights fabricated by artisans in Colombia. More recently, in collaboration with Si Studio, he’s brought the design idea to a group of wicker artisans in Chile, resulting in a new series, Chimbarongo PET lights, named after the city near Santiago where the shades are woven.

The tradition in Chile is to use natural, rather than dyed, wicker, so this collection gets its subtle coloring from the soda bottles themselves. Catalán de Ocón plans to keep introducing the PET concept to different weaving communities around the world, and to continue his mission of “searching for alternatives of production” and ways to fuse “original artisanal and industrial techniques.” As he says, “The PET Lamp for us has become a pretext for getting to know different countries and cultures and to enter into the lives of people in a manner that would not have been possible any other way.

Photographs from the PET Lamp workshop. 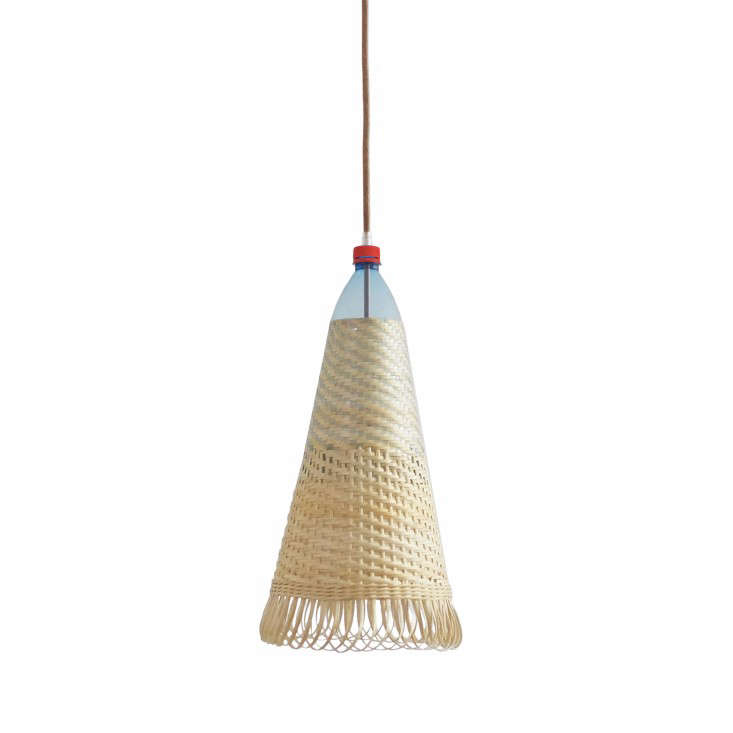 Above: Catalán de Ocón got his inspiration for the shape of the lights from Japanese bamboo tea whisks. Shown here, the Chimbarongo S-A (€275); like all of the designs, it’s available directly from PET Lamp. 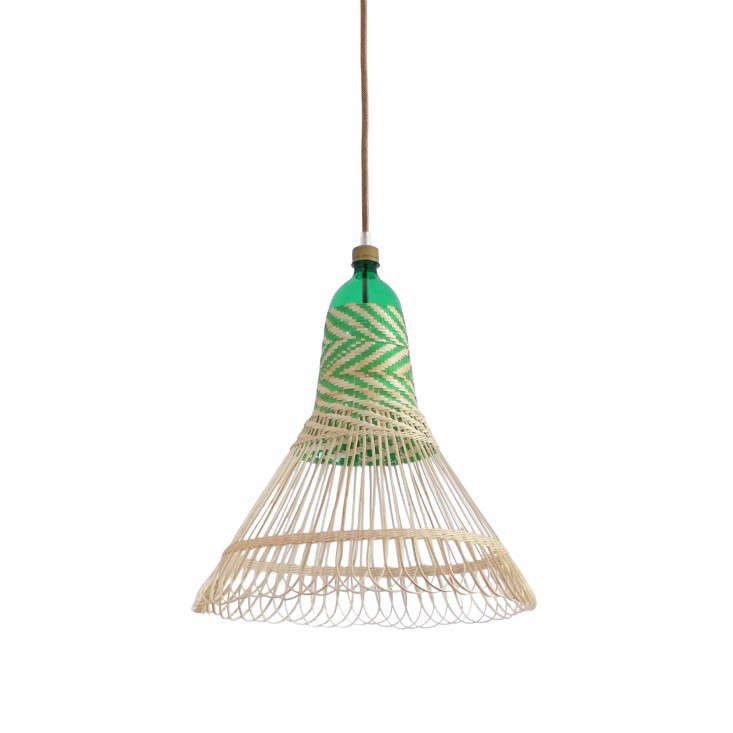 Above: The bottom of the soda bottle is cut off and the body is shredded into strips that are interwoven with natural wicker. The bottle necks form the top of the light and give the shade structure. A bulb is hung below the neck and a cloth cord threaded through the top. No two are exactly alike; this example, the Chimbarongo S-B, is €275. 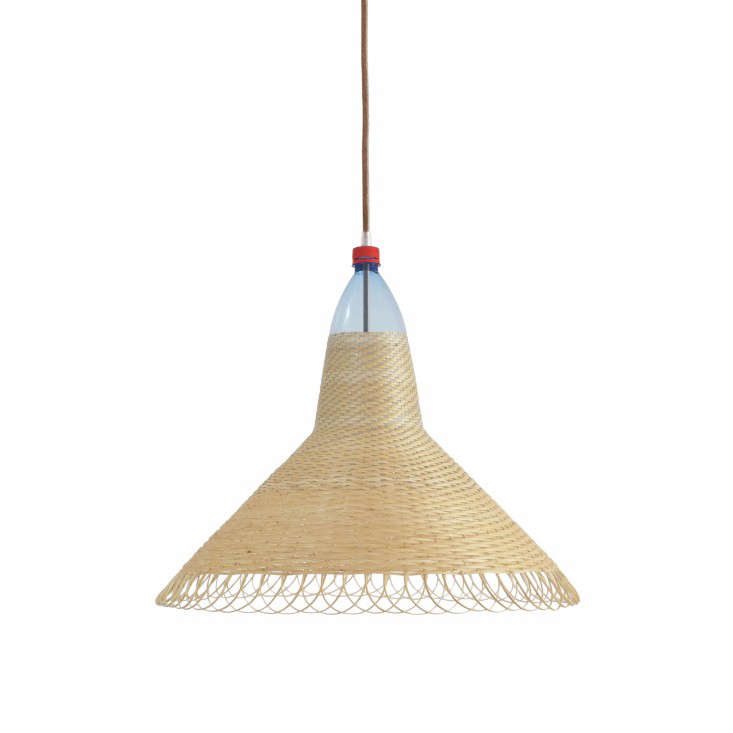 Above: “The whole city is involved in working with wicker,” Catalán de Ocón told Dezeen, referring to Chimbarongo, Chile, where he spent a month working with traditional weavers and introducing plastic castoffs to their work. The Chimbarongo M-A is €325. 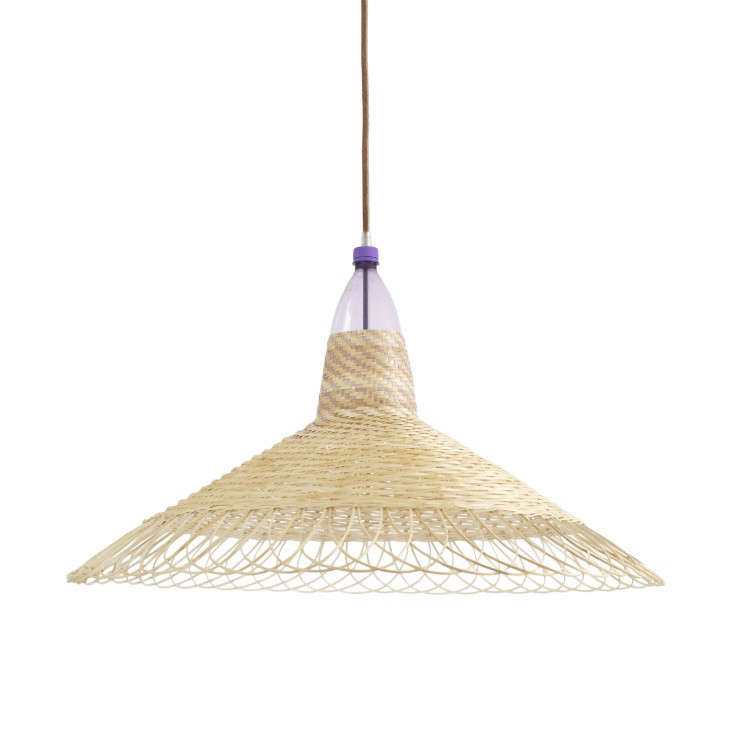 Above: The violet-hued Chimbarongo M-B is €325. Each of the designs is available with an E14 lamp holder and a 7W fluorescent bulb or, for an additional €25, an E27 lamp holder and a Plumen 001 Baby lightbulb. If you haven’t discovered the Plumen, see World’s Most Stylish Lightbulb, Version 002. 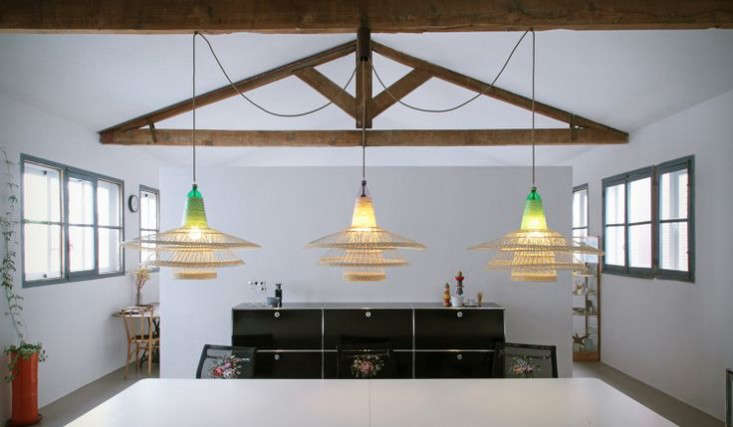 Above: The lights are sold individually and as sets strung together (the largest features 18 lights). The Chimbarongo Set of 3 (shown above) is €2,250 and hangs from a cylindrical iron stem; the cloth-covered electrical cord was designed, says Catalán de Ocón, to have “the perfect texture and fall.” Go to Alvaro Catalán de Ocón to learn more about the project.
See the PET Lamps in situ in our post Restaurant as Social Experiment about a Milan cafe built by prisoners. Go to Gardenista for another version of green lighting–A Chandelier That’s Also an Herb Garden. And for more of our favorites, browse the 445 images of Lighting in our photo gallery.

Steal This Look: A Tiny, Seaworthy Kitchen on the French Riviera