Is it any wonder that Pedro Reyes and Carla Fernández have been compared to Diego Rivera and Frida Kahlo? Reyes studied architecture in Mexico City and went on to become a sculptor with a political agenda and an international following (Sanatorium, a traveling clinic he installed at the Guggenheim, treats “urban malaise,” and he’s made thousands of pre-programmed musical instruments from Mexico’s confiscated firearms). Fernández is an edgy fashion designer who works with Mexican textile artisans to revitalize her country’s crafts tradition. (She’s also a longstanding collaborator in Harvard’s Cultural Agents initiative.) And the surprising, all-concrete house they recently built for themselves is at once a salute to Mexico’s past and a boundary-crossing look forward.

We discovered their Brutalist quarters via our friends at Freunde von Freunden. Go to FvF’s Building Beauty from Brutalism for a full tour of the atelier.

Photography by Ana Hop for FvF. 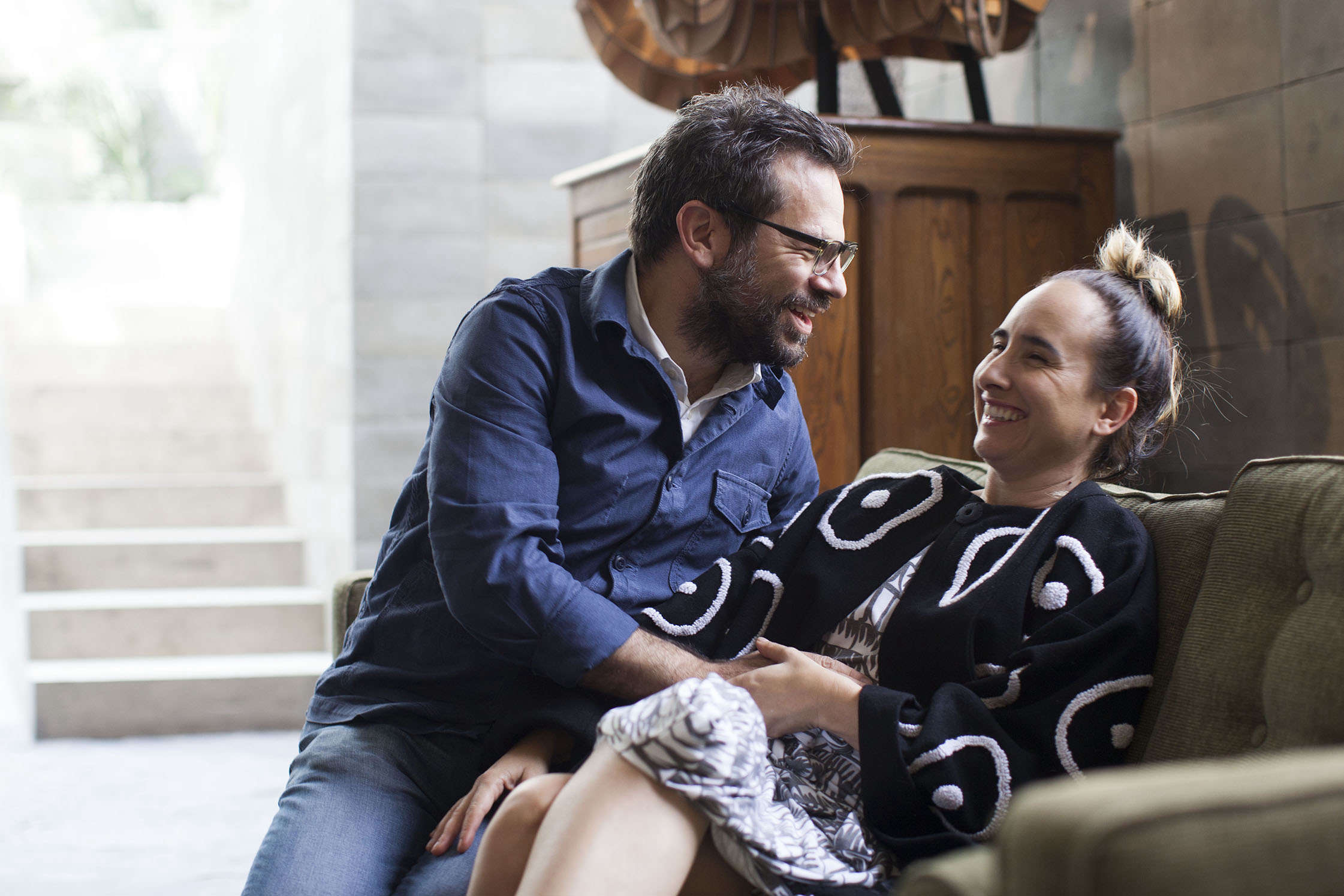 Above: Reyes and Fernández at home in Mexico City’s Coyoacán, a neighborhood best known for Frida Kahlo’s Casa Azul. The couple have two young children and host a steady stream of visitors, friends, and collaborators—during the construction process, they also put up members of their work crew. The house is the reinvention of an existing suburban structure: FvF reports that his plan was to “transform a 1,000-square-meter home from ‘a 1980s monstrosity with an indoor pool and various eccentricities’ into a space that ‘includes hints of all of Mexico’s many modernities.'” 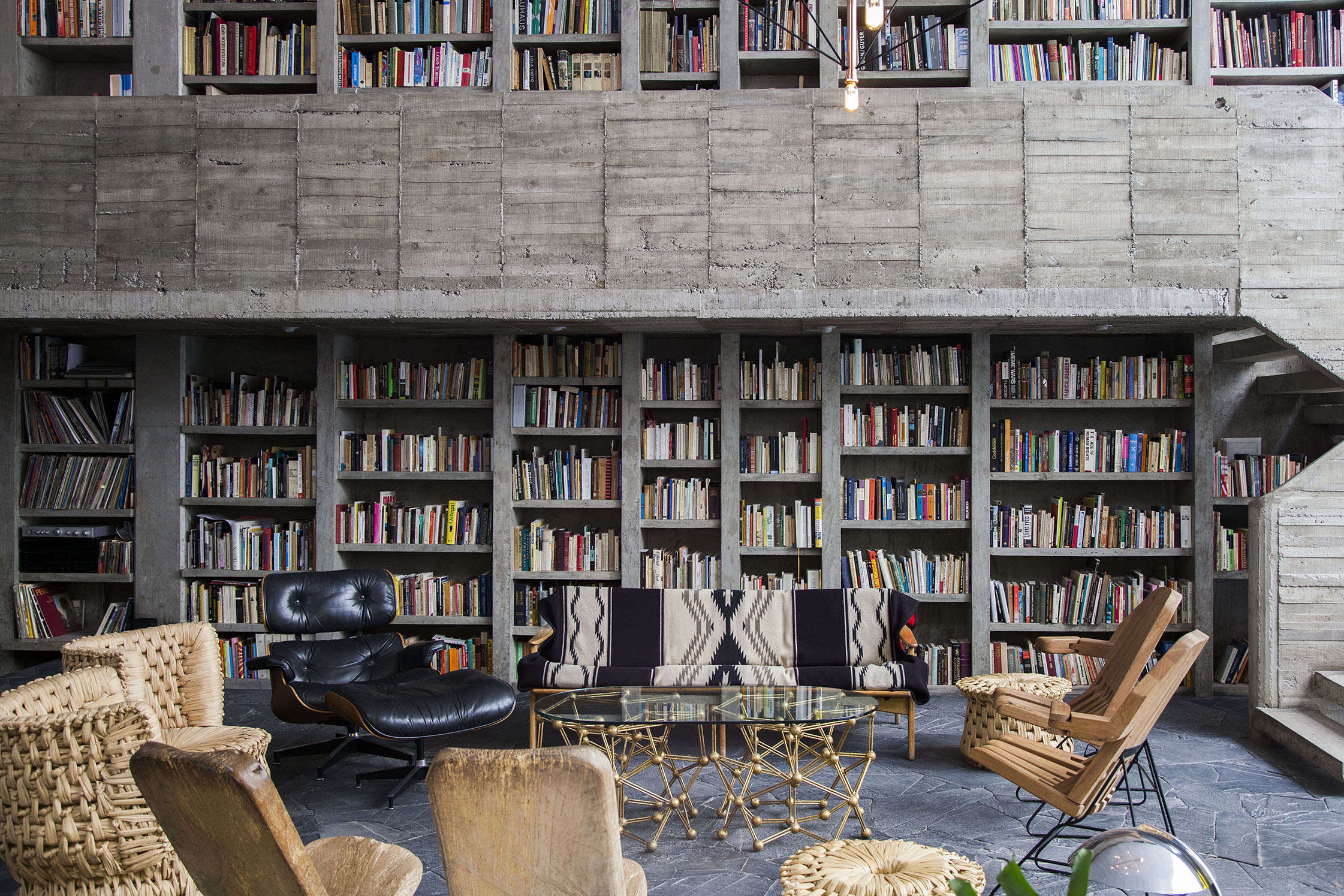 Above: Concrete shelves form a two-story library at the heart of the house. The couple say that they don’t aspire to owning a lot of things except books. (On a recent trip to Tokyo, Reyes told FvF, he returned with two suitcases full of reading materials: “I’m very promiscuous in terms of my interests.”) 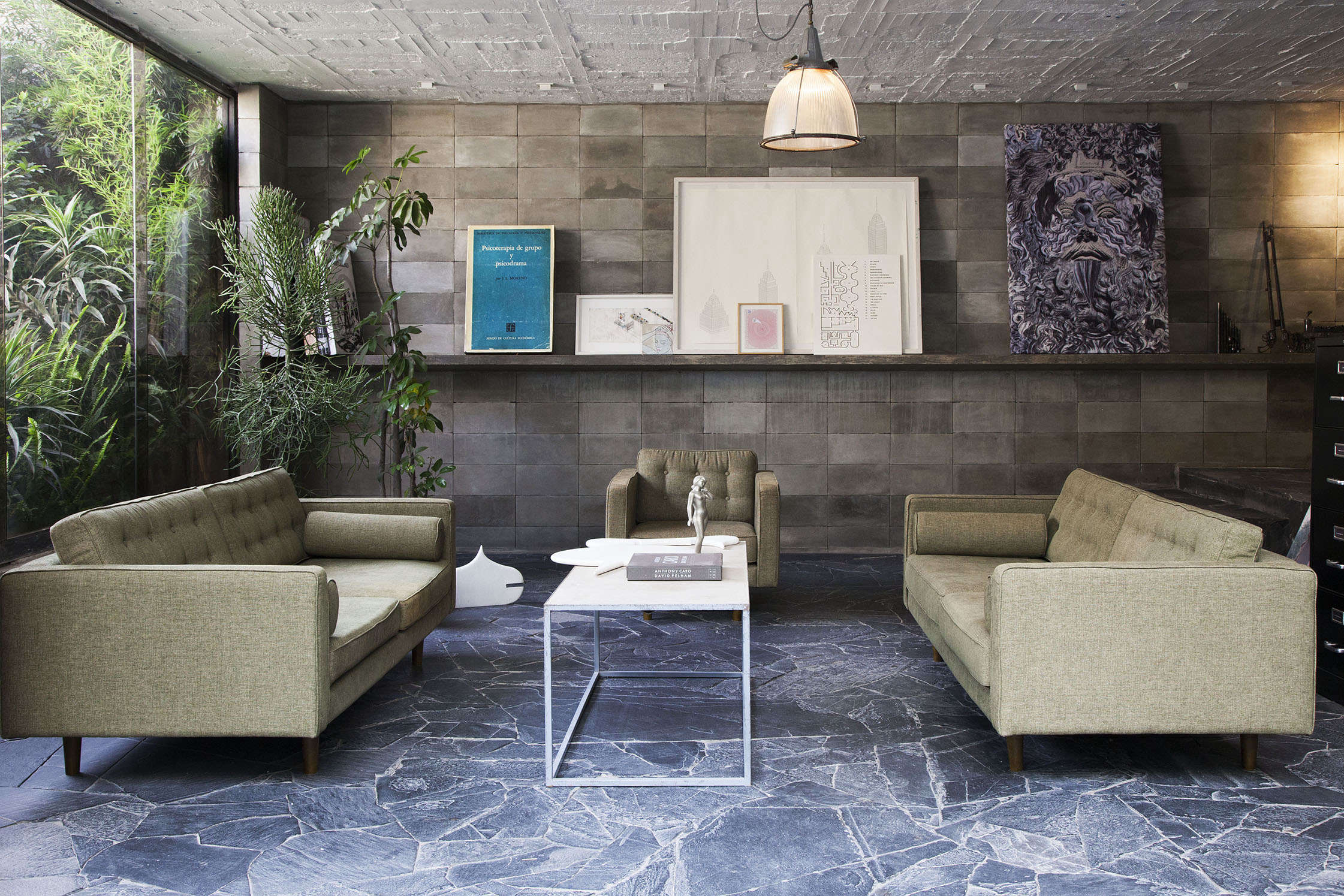 Above: Midcentury furnishings in a flagstone-paved sitting area overlooking one of the house’s many gardens. The floor was inspired by Diego Rivera’s 1957 design at the nearby Anahuacalli Museum. Reyes says the many uses of concrete throughout were influenced by Mexico’s Brutalists, especially the work of still-practicing-architect González de León.

The wall shelf displays a rotating collection of Reyes’s work. He explained to us that the ceiling “had plaster but we took it off to reveal the texture of the original cast”—and the vintage factory light came from La Lagunilla, “the best flea market in Mexico City.” 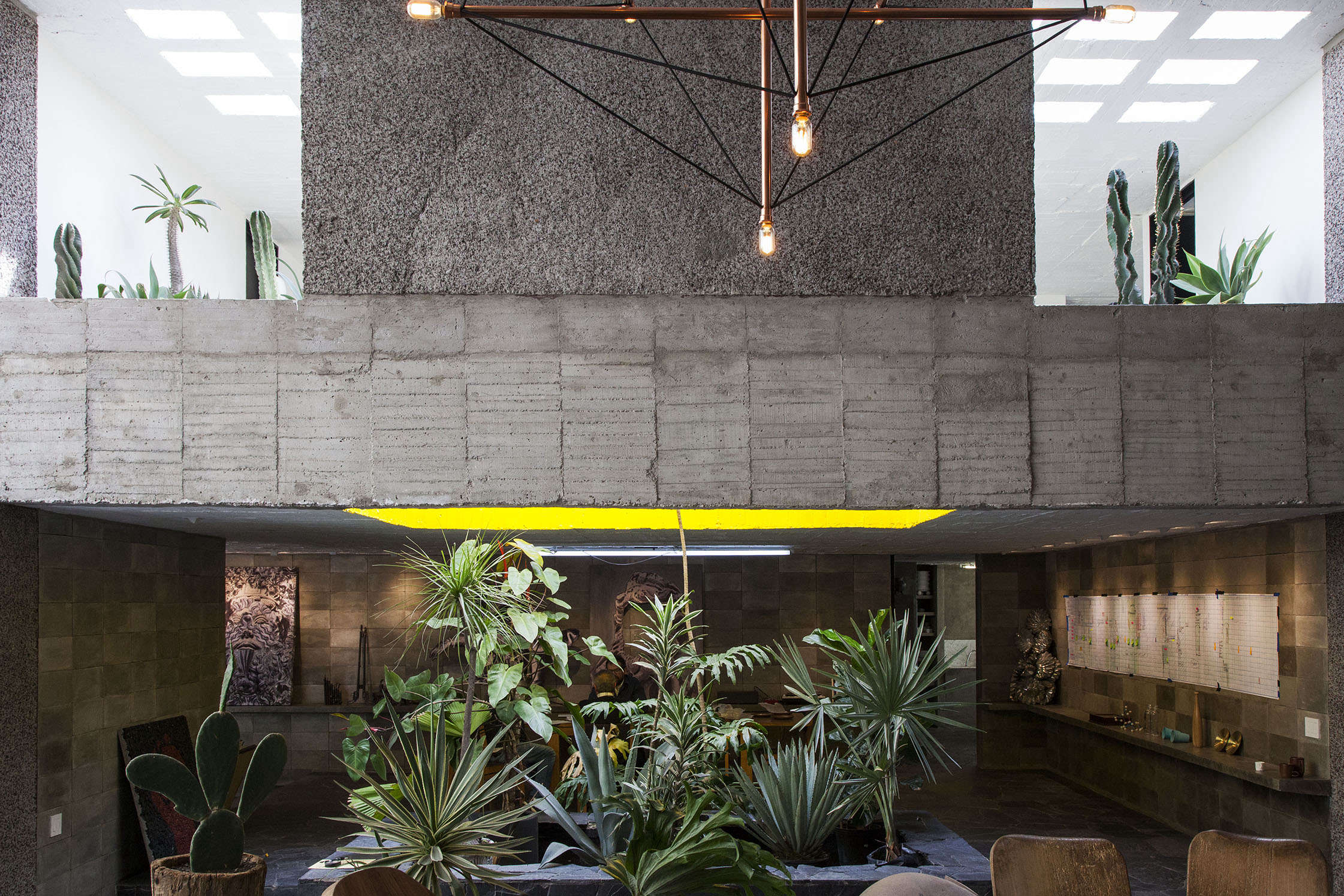 Above: The couple introduced a range of concrete textures—and plantings—throughout the house. 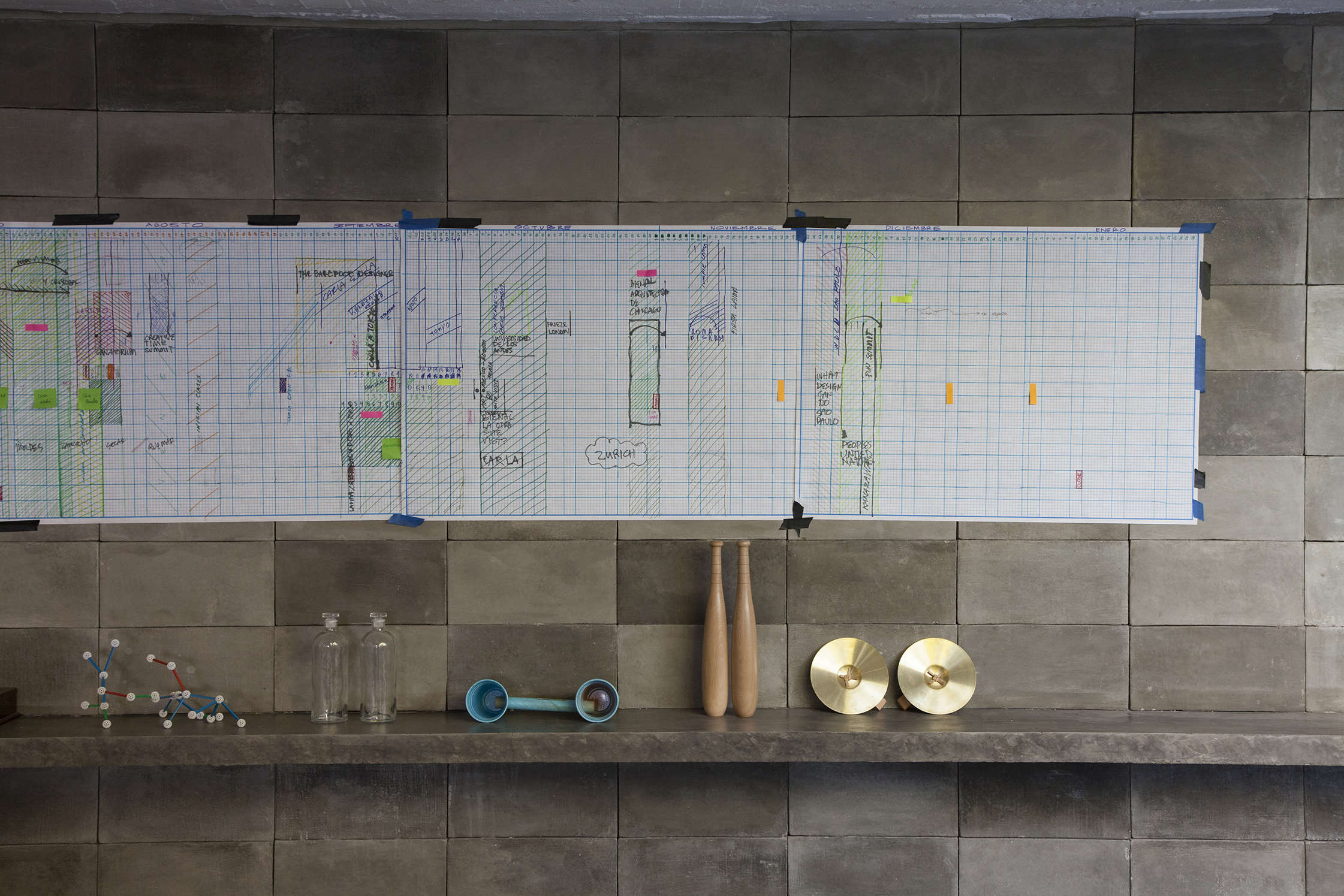 Above: Handmade bricks covered with a “wax-like concrete paste” were developed and fabricated on site. The couple’s year planner is taped to the wall: “Since we both travel for work,” says Reyes, “it helps us to coordinate our schedules, so we can keep track of who’s taking care of the kids.” 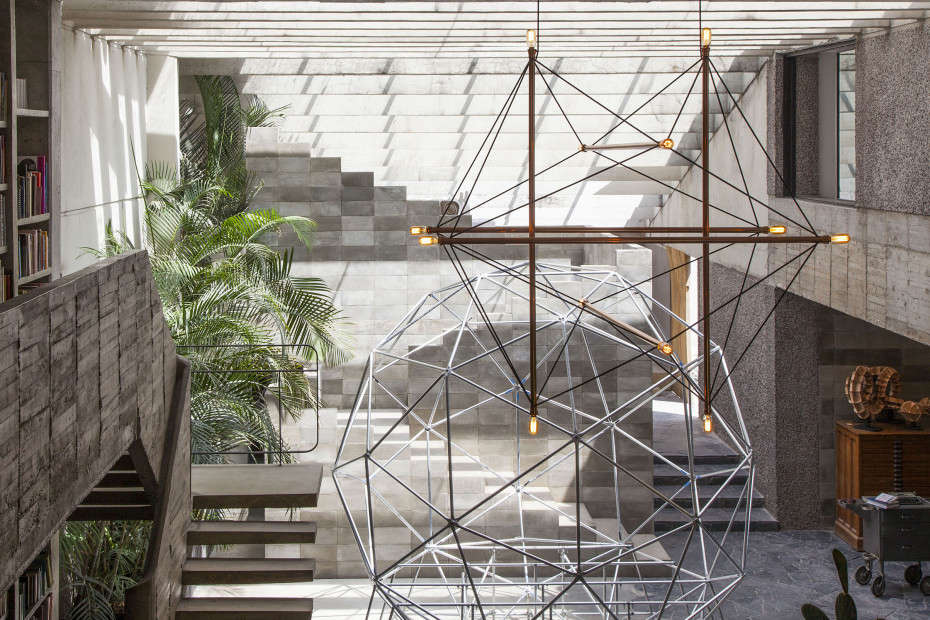 Above: Concrete open stairs lead to the upper story of the library. The space doubles as a gallery: Shown here, Reyes’s suspended light and homage to Buckminster Fuller. 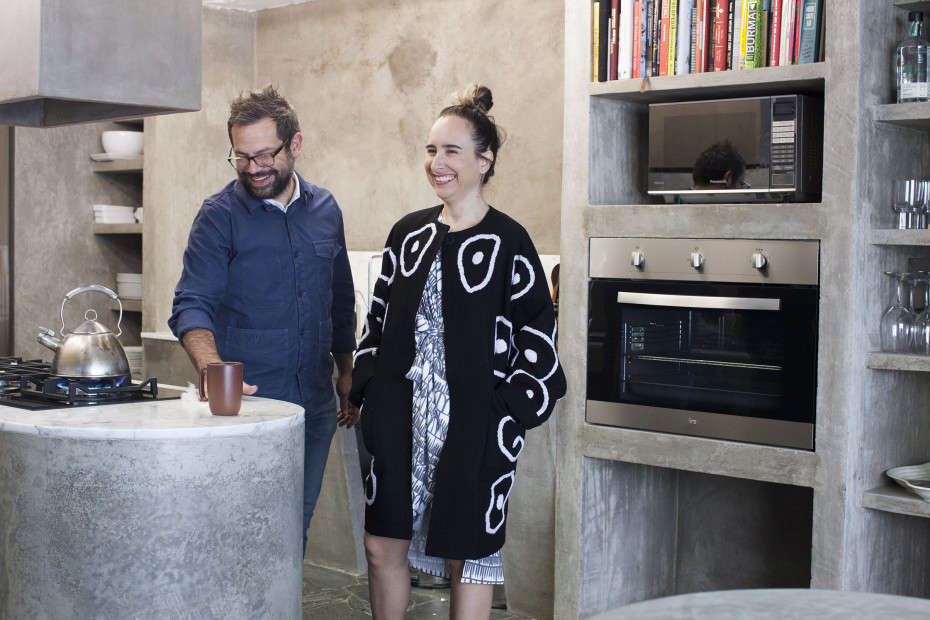 Above: The all-concrete design extends to the kitchen. Fernandez is wearing an embroidered wool coat of her own design. 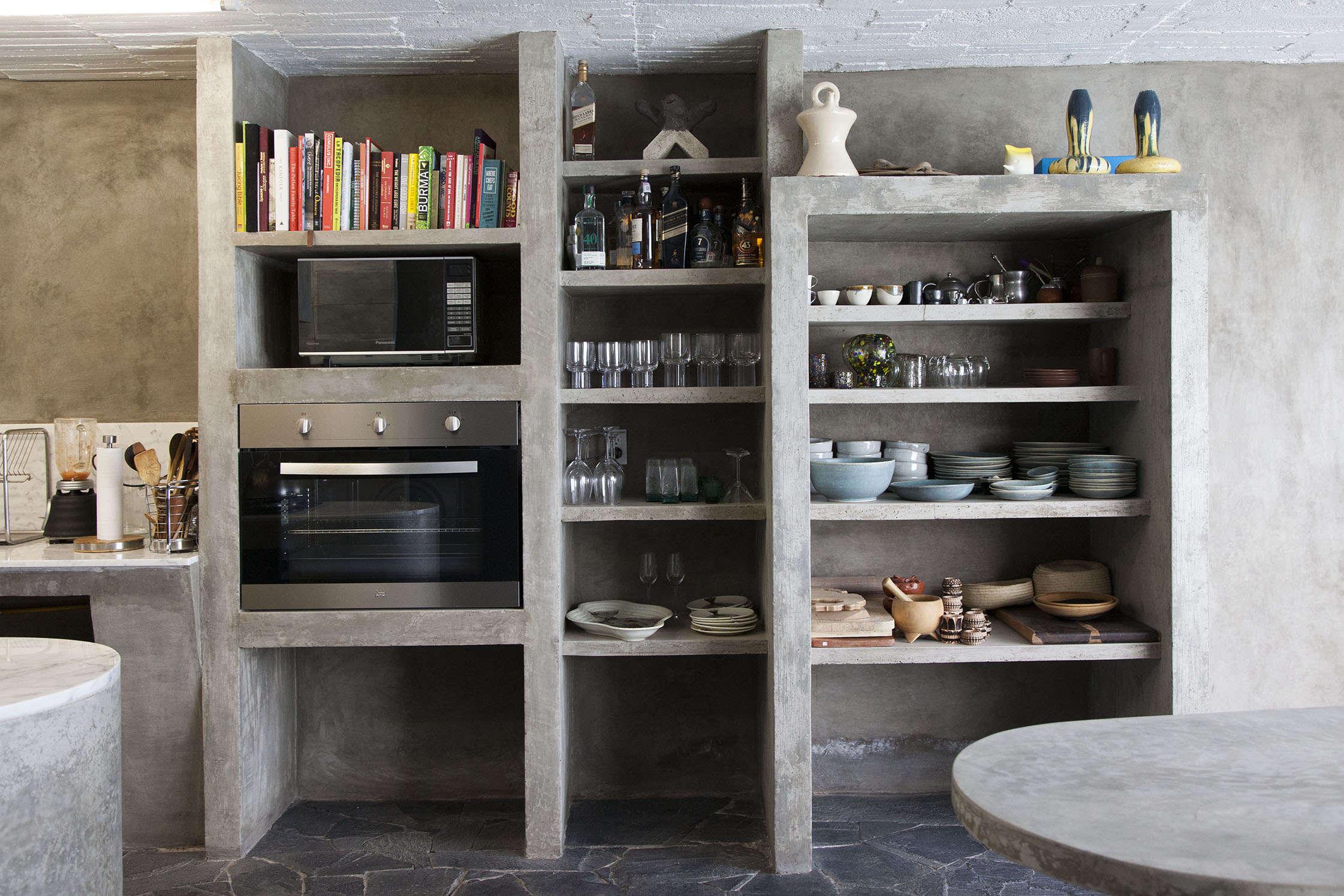 Above: A wall oven is neatly slotted into the open shelving under the microwave. Note the concrete kitchen table. 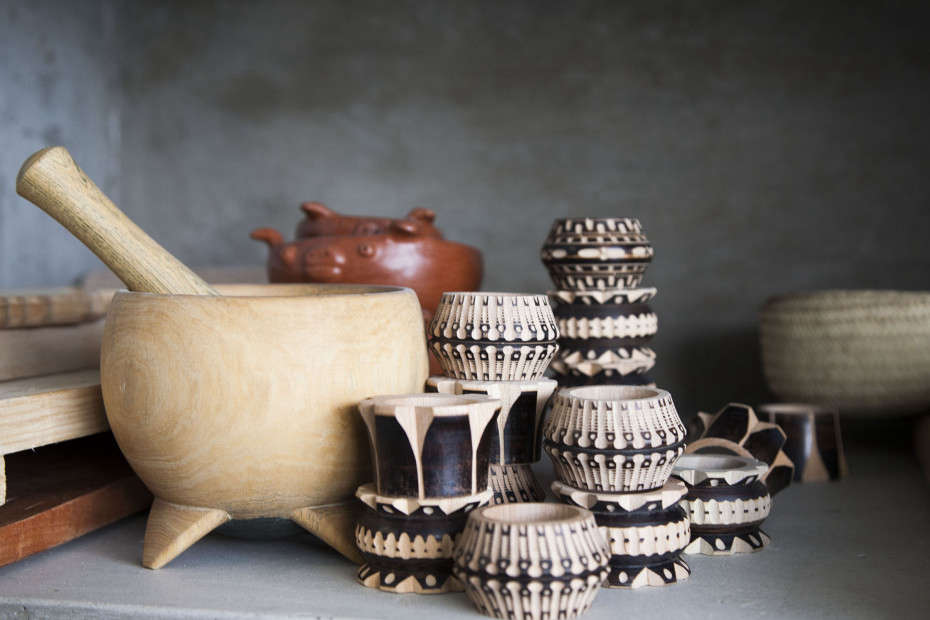 Above: A collection of molinillo parts, carved and burned wood used for whisking hot chocolate. 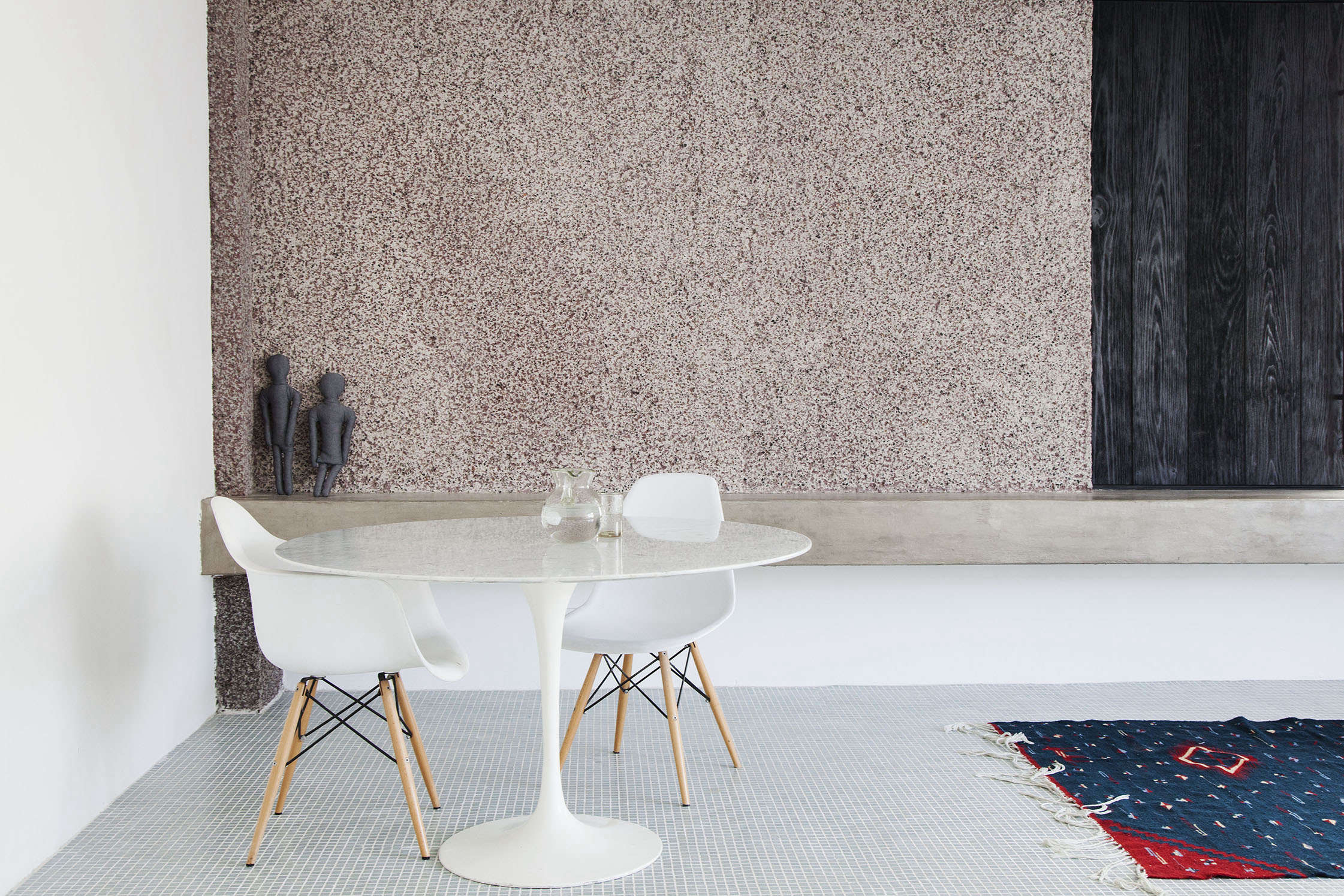 Above: A Saarinen table stands on a tiled terrace against a wall of concrete “made with an aggregate that has been hammered with a chisel to give it that rough texture,” Reyes explained to us. The sliding wood door is his “tropicalized version of shou sugi ban.” 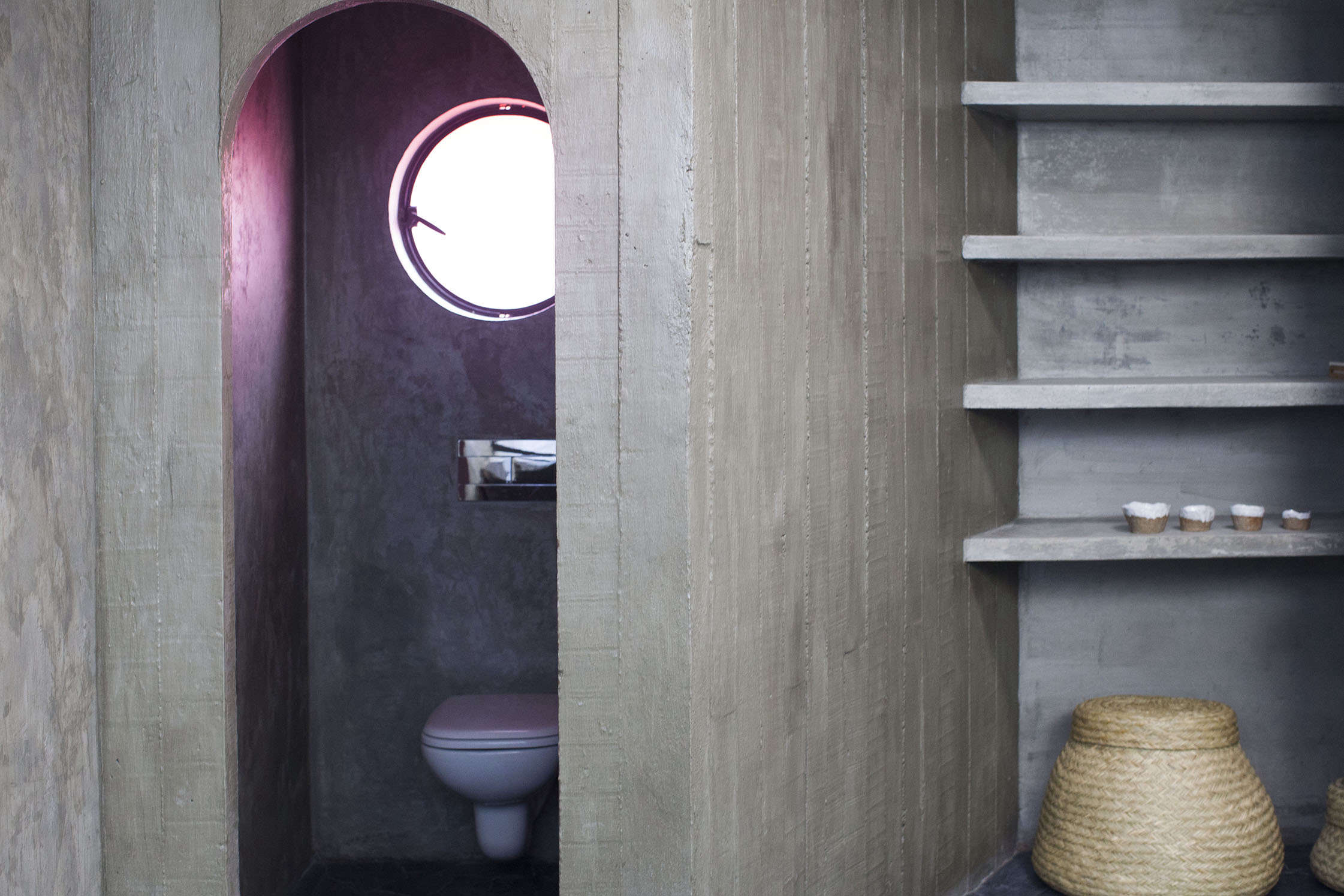 Above: An arched doorway in a pink-lit bathroom with built-in-shelving. 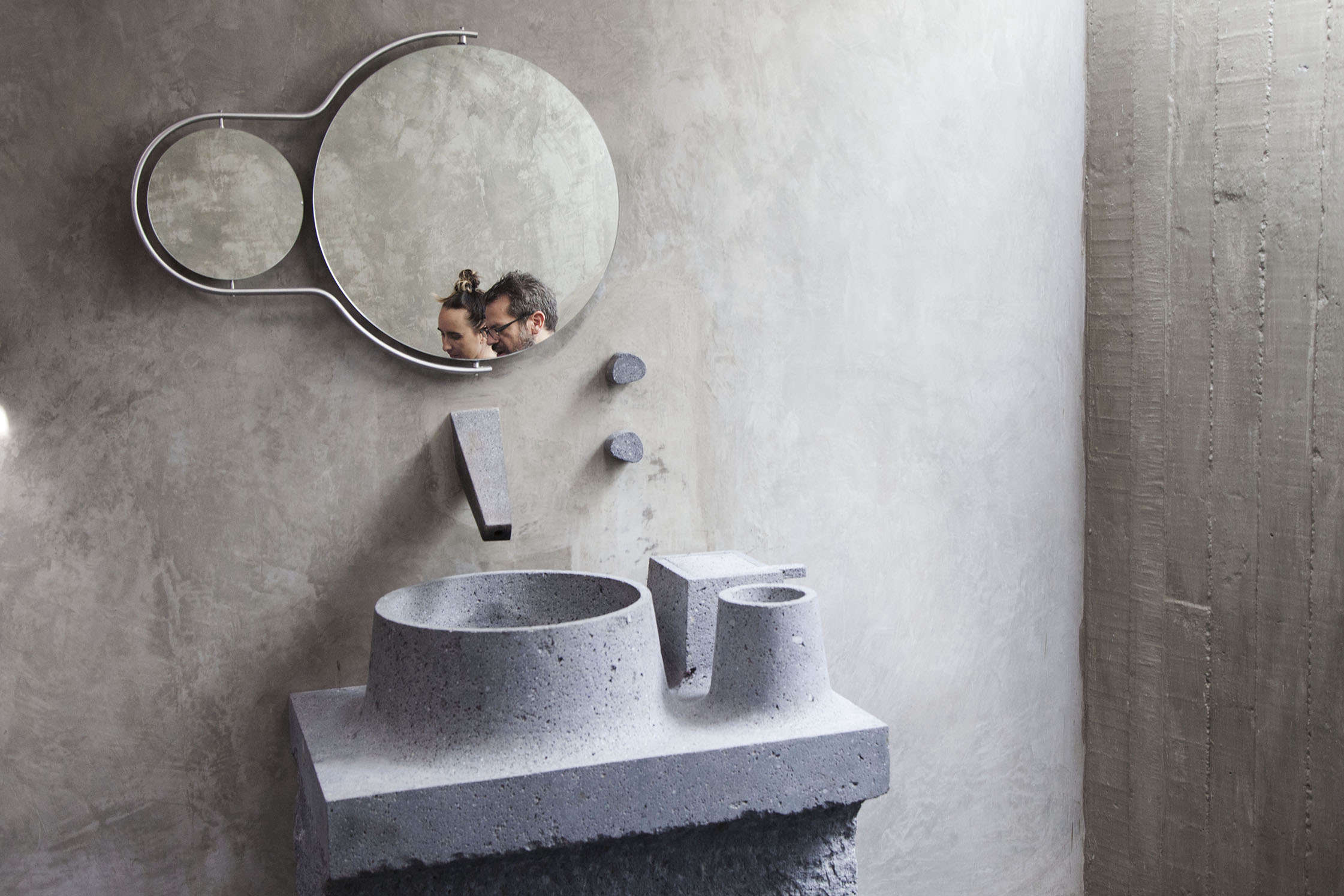 Above: Another bathroom has a sand-castle-like sink that the couple sculpted out of volcanic stone. “It’s a little like living in a factory, but also a playground, too,” Reyes told FvF.

Pedro Reyes is represented by Lisson Gallery of London and New York. Go to Carla Fernández to see her fashion collections and watch videos of the artisans she’s worked with.

Read the complete interview with Reyes and Fernández and see more of their house at FvF.

Curious about concrete? See our posts on its many applications, including: