Every so often, there comes a movie so otherworldly that it transports you to a place you’ve never been—while enveloping you in a strong sense of nostalgia. Case in point: Wes Anderson’s Moonrise Kingdom. We've got the inside line from the movie's set decorators; to learn how they worked their alchemy, read on.

Set in 1965, Moonrise Kingdom tells of optimism, rebellion, and first love, as two young campers (played by Kara Hayward and Jared Gilman, the first film for both) flee their family summer home and campground, respectively, to run away together. Set on New Penzance, a fictional New England island, the movie exudes a sense of adventure and 1960s cool.

Set decorator Kris Moran (she's worked with Anderson on all of his projects) and assistant set decorator Kate Dougherty share their inspiration and sourcing for creating these worlds, and offer some exclusive behind-the-scenes photos. 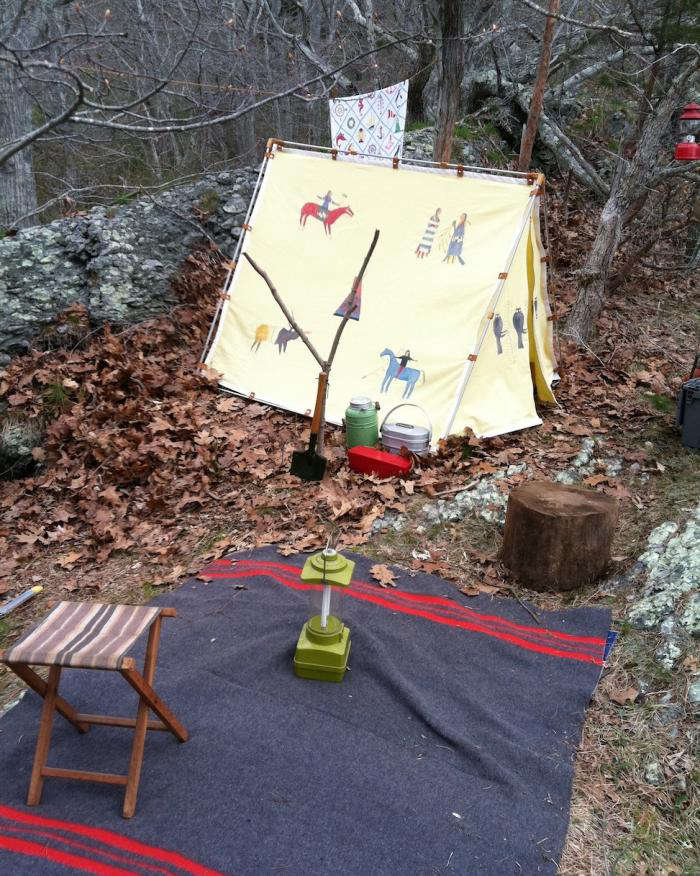 Above: Suzy and Sam’s “hidden camp,” where they spend their first night, highlights a mix of vintage, DIY, and bespoke. According to Dougherty, "we looked at a lot of old Boy Scout books from the 1950s and 1960s, for the shape of the tents, utensils around the campsite, colors, and even for the language in the signage.” Moran sourced the wool blanket from an Army Navy store and worked with the art department to create the design of the tent. “We were attracted to aluminum tube frame structure pieces from the 1960s and 1970s.” The piece is based on vintage tents that consisted of an external pipe structure and nylon covering. The team worked with over 15 yellow fabric options, eventually choosing something with a bit of translucency. Local Rhode Island seamstress Patty Freeborn sewed the tent together and the scenics department added the finishing graphics. Photo by Kate Dougherty. 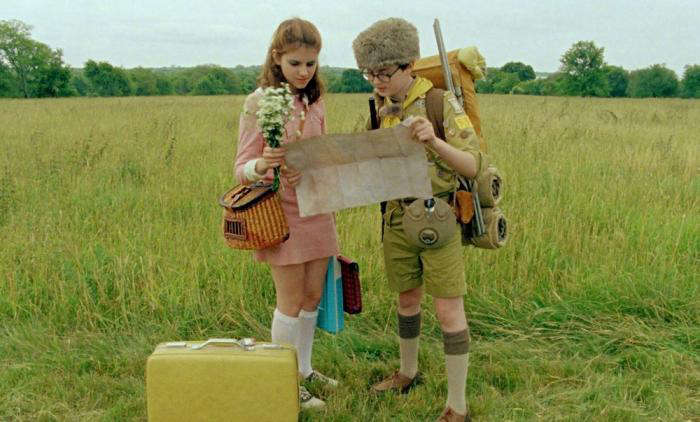 Above: The journey begins: Kara Hayward (Suzy) and Jared Gilman (Sam) meet at their agreed rendezvous place. According to Dougherty, Anderson gave everyone “a series of folders of inspiration,” which provided details of the time and characters, and highlighted the overall feeling and color palette he wanted to achieve. The yellow suitcase is vintage, sourced by property master Sandy Hamilton. Photo courtesy of Focus Features. 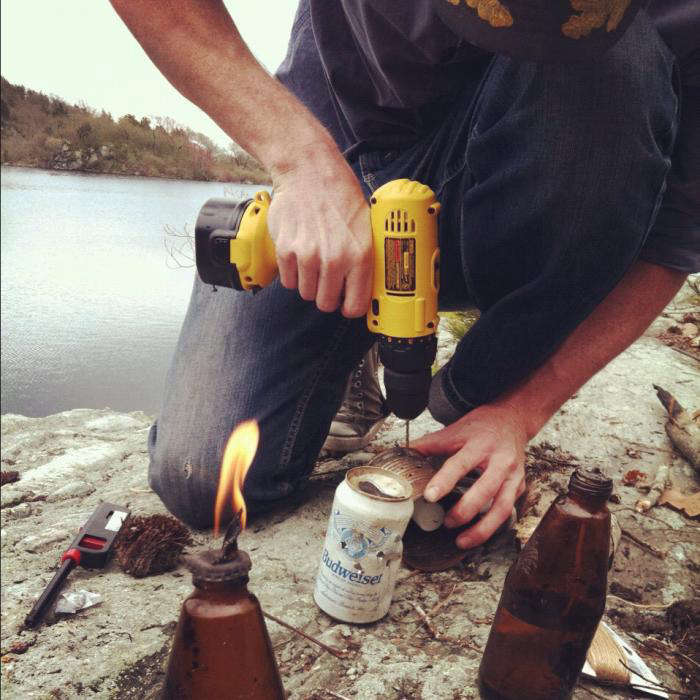 Above: Dougherty and her crew “looked to our surroundings in nature and used what we found instead of going and buying everything.” The crew made DIY lanterns using cans, bottles, and sticks. Photo by Kate Dougherty. 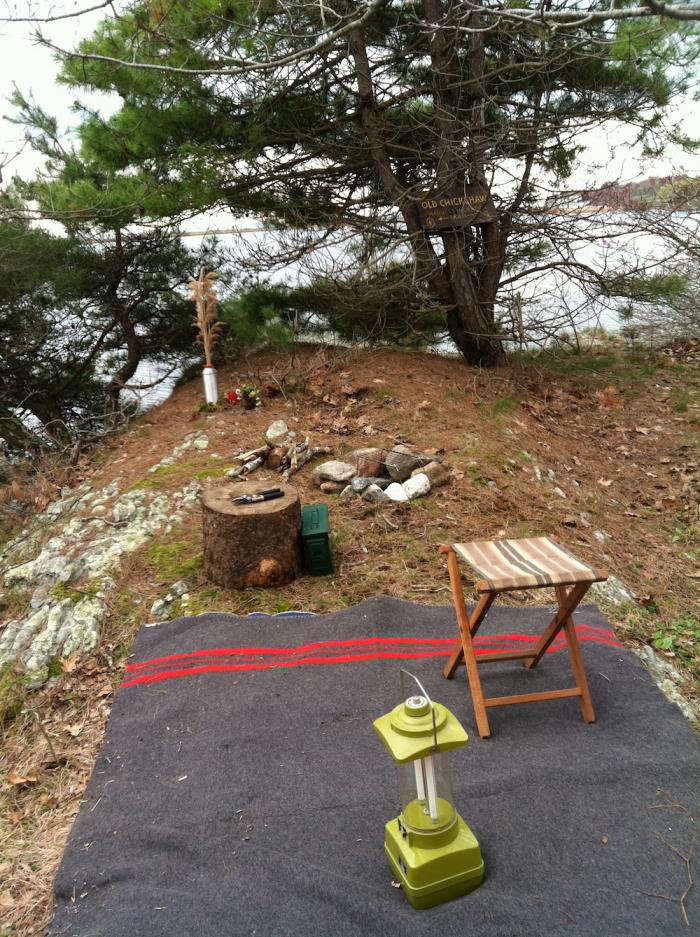 Above: The vintage green lantern is from the personal collection of Danica Chipman, the set decoration buyer; the folding stool was found in a New England thrift shop, and the crew made the tree stump stool from scratch. Photo by Kate Dougherty. 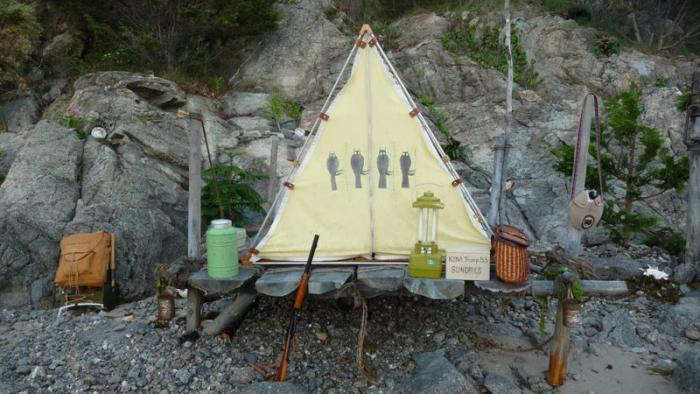 Above: Sam and Suzy’s “lagoon”; photo by Steve Brennan. 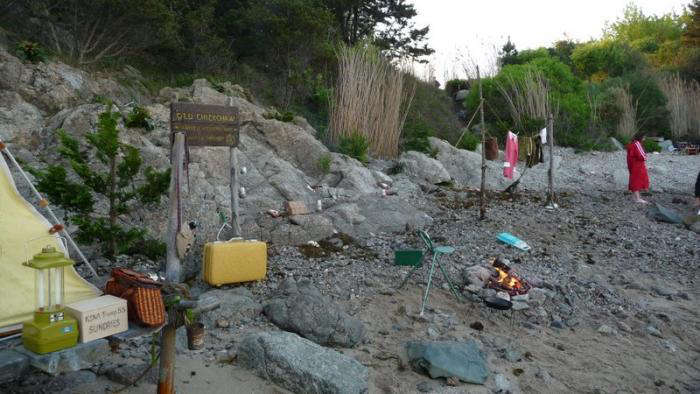 Above: A quite moment on set, in between takes. Moran scored the vintage green tripod from eBay, something she knew Anderson would love, and Dougherty designed the troop sundries box. Photo by Steve Brennan. 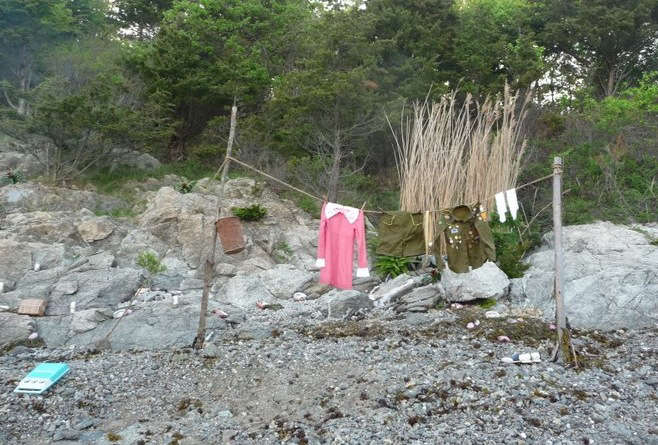 Above: For each set, the art and props department brought their pieces for Anderson to pull from, says Moran. He would often come up with new ideas, sometimes on the spot. According to Dougherty, it's those last-minute requests make you the most creative. For this clothesline, "I believe Wes wanted that as a main shot, with their stuff hanging there, so we had to work quickly with what we had." For more inspiration on building a similar piece, see Shelter Island Clothes Line.

Looking for more rustic inspiration? See 247 images of cottages and cabins in our Gallery of rooms and spaces.

Steal This Look: A Simple Backyard Dining Pavillion in London

The Potted Garden: A Planter for Every Purpose, from Rejuvenation