Merrick Angle is an English designer/illustrator based in rural France; more specifically, a "crumbly, vine-covered studio near Limoges," as he says. We like his new Minimal Wood Clock, which was "inspired by the fine woodland that surrounds up here at Double Merrick HQ. Crafted by hand from reclaimed Limousin Douglas timber (noted for its orangey red hue), each clock is cut to size, sanded, and then screenprinted with a simple 'Arrow 12' design. Then the clock is dried, waxed, and fitted with a quartz mechanism." Each clock is approximately 44 centimeters in diameter (17.3 inches) and requires a single AA battery; €60 directly from Double Merrick (worldwide shipping available; approximately $20 to the US). 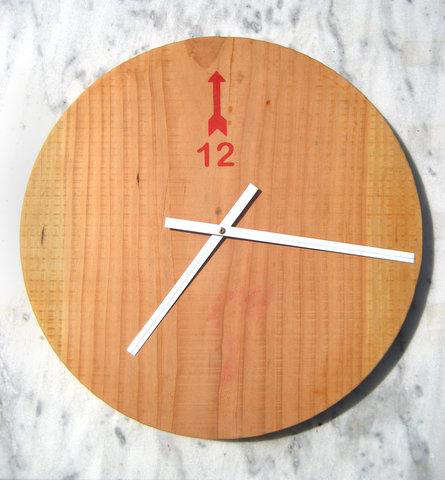 Beauty in Imperfection: Household Accessories Made from “Wormy Wood”