Forget camping: We’re staying at the Basecamp Hotel in South Lake Tahoe next time we head into the wilderness.

Basecamp Hotel’s co-founders Neils Cotter and Christian Strobel didn’t have to look far for a designer for their South Lake Tahoe hotel project: They hired Cotters’s wife, designer Elaine Cotter, for the job. Cotter helped the pair transform a rundown motel into a stylish destination, which was a major feat considering there were squatters in the space when they purchased the property. The redesign stripped the original structure down to the framing and foundation and rebuilt the hotel using green building techniques and materials whenever possible.

The results are a modern take on rustic style, designed with outdoor enthusiasts in mind (the hotel is located just a few minutes from the Heavenly Gondola and Lake Tahoe). With multi-bunk rooms reminiscent of a ski house or sleep-away camp, it’s also an affordable way for friends to enjoy the area as a group. For more information, go to Basecamp Hotel. 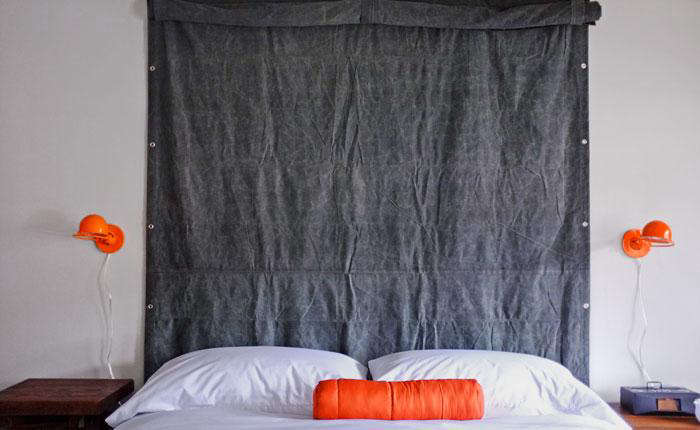 Above: Tarps hang above the beds in lieu of traditional headboards (the same fabric was used to create the bed skirts). 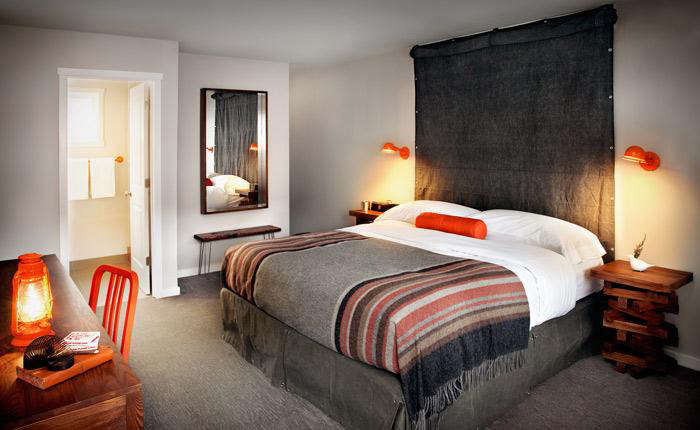 Above: The rooms feature a palette of orange and gray, with flannel, wool, canvas, and wood adding texture. 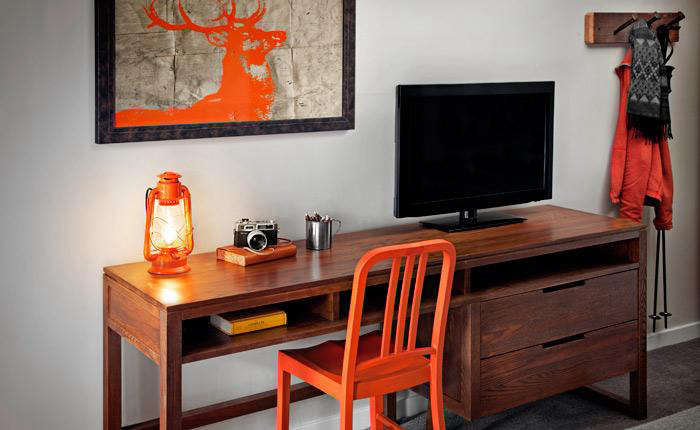 Above: Original art by San Francisco-based illustrator Wendy MacNaughton hangs above a desk-drawer unit. A parafin lantern wired to take a CFL bulb acts as a desk light. 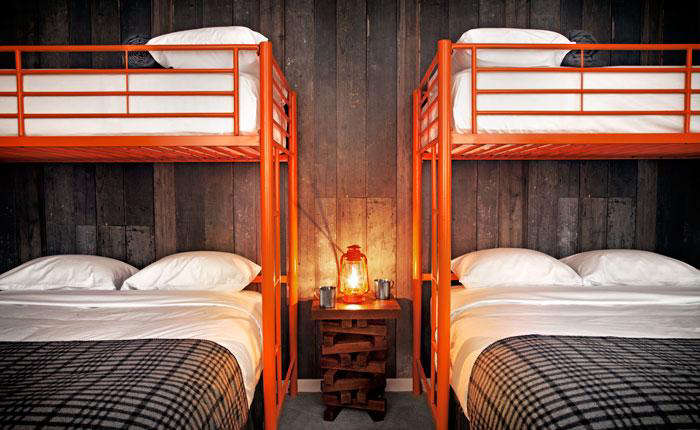 Above: In addition to traditional king and queen bed rooms, the hotel also has dormitory-style lodging, including rooms with two queen-sized beds and with a single bunk over each (above) and a room they call the “Explorers Club” room, which has four sets of single bunk beds and can sleep up to eight people. 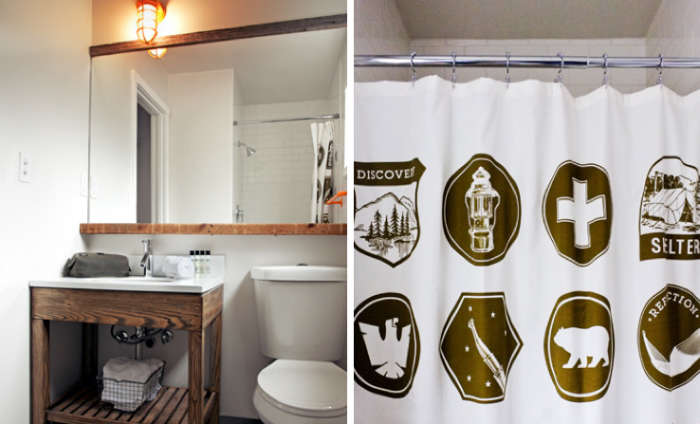 Above: The cabin-like vibe continues into the bathrooms, with shower curtains featuring iconic camping imagery. 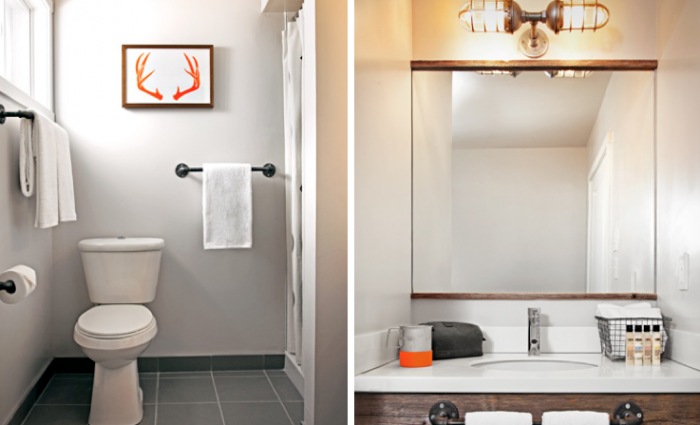 Above: Bathrooms are clean and simple, with towel bars and toilet paper dispensers made from plumbing fixtures and pipes. 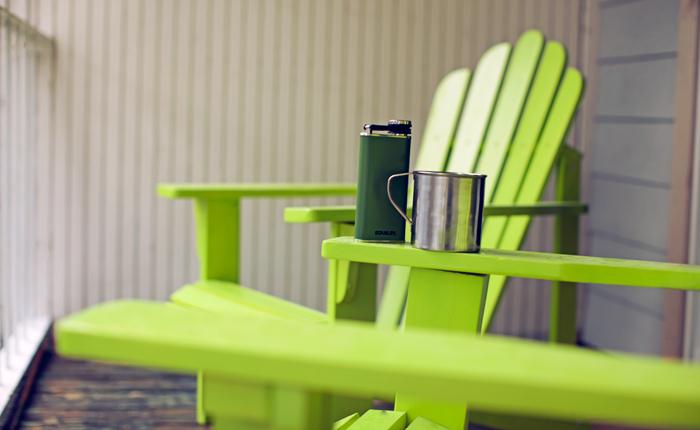 Above: Rooms on the front side of the hotel have patios featuring classic Adirondack chairs that have been painted a bright lime green. 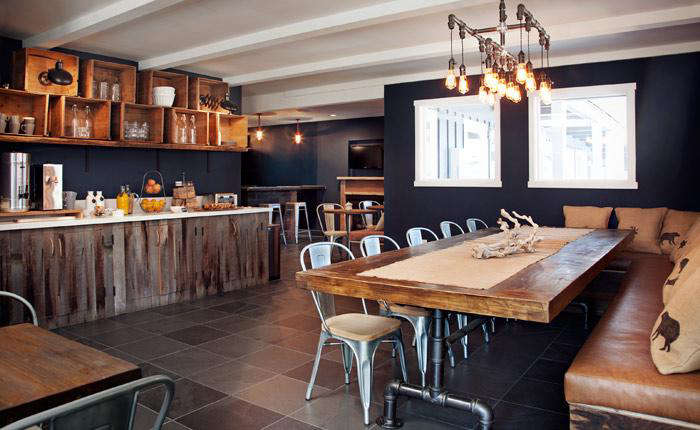 Above: The hotel’s dining area is outfitted with a bar covered in reclaimed timber and a rolled steel top, Tolix stools and chairs, and a faux-leather banquette. 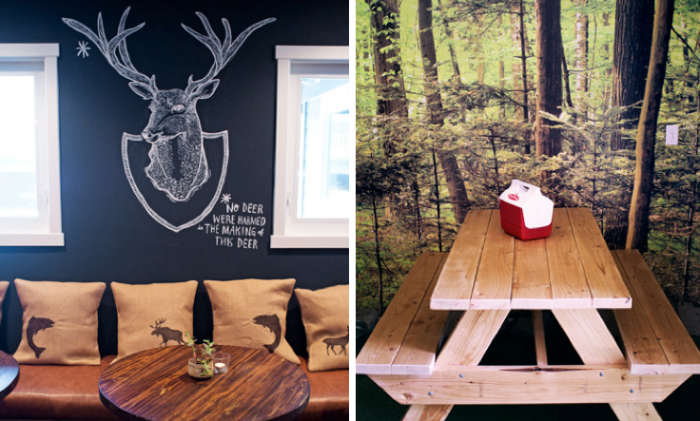 Above L: An image of a taxidermy deer adorns a wall in the lounge. Above R: A classic picnic table, equipped with drinks cooler, sits in front of arboreal wallpaper.